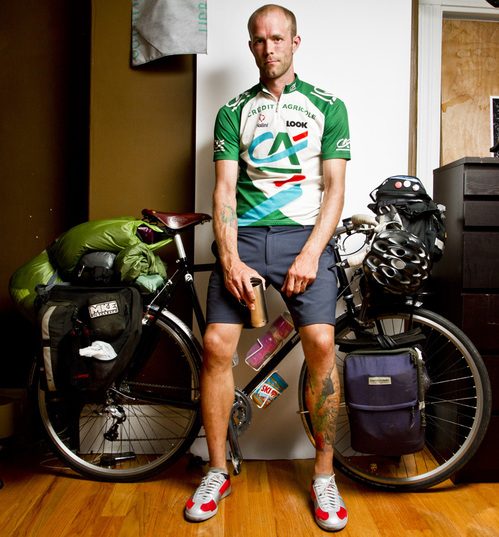 Doug D @dougdalrymple is one of the most unique people I’ve ever met. I’ve had the privilege to get to know him and his idiosyncrasies over the years while living in NYC. He went from “that guy who takes polo photos” to what I’ll sum as as “life cyclist”. Doug filmed for the late Triple Rush, is an alleycat winner, bike messenger, amazing photographer and internet sanitation expert (he lets me know when my e-presence is getting out of hand).

9 days ago, Doug took off on a tour from NYC to Portland, Maine on this bike. While he was in Boston, he met up with Gustav Hoiland where this portrait was taken. Doug’s fully loaded and packing the peanut butter, photography gear and wearing Outlier Three Way Shorts. He and I have been conversing over the past few weeks about the tour essentials, many of which I’ll be sharing with you over the next few days.

Please, if you see Doug, offer him a warm shower, some power to charge his iPad and a beer. He’s a stand up guy and appreciates all your help. Hit him up on Twitter for on-the-road updates and photos. Ride safe Doug!