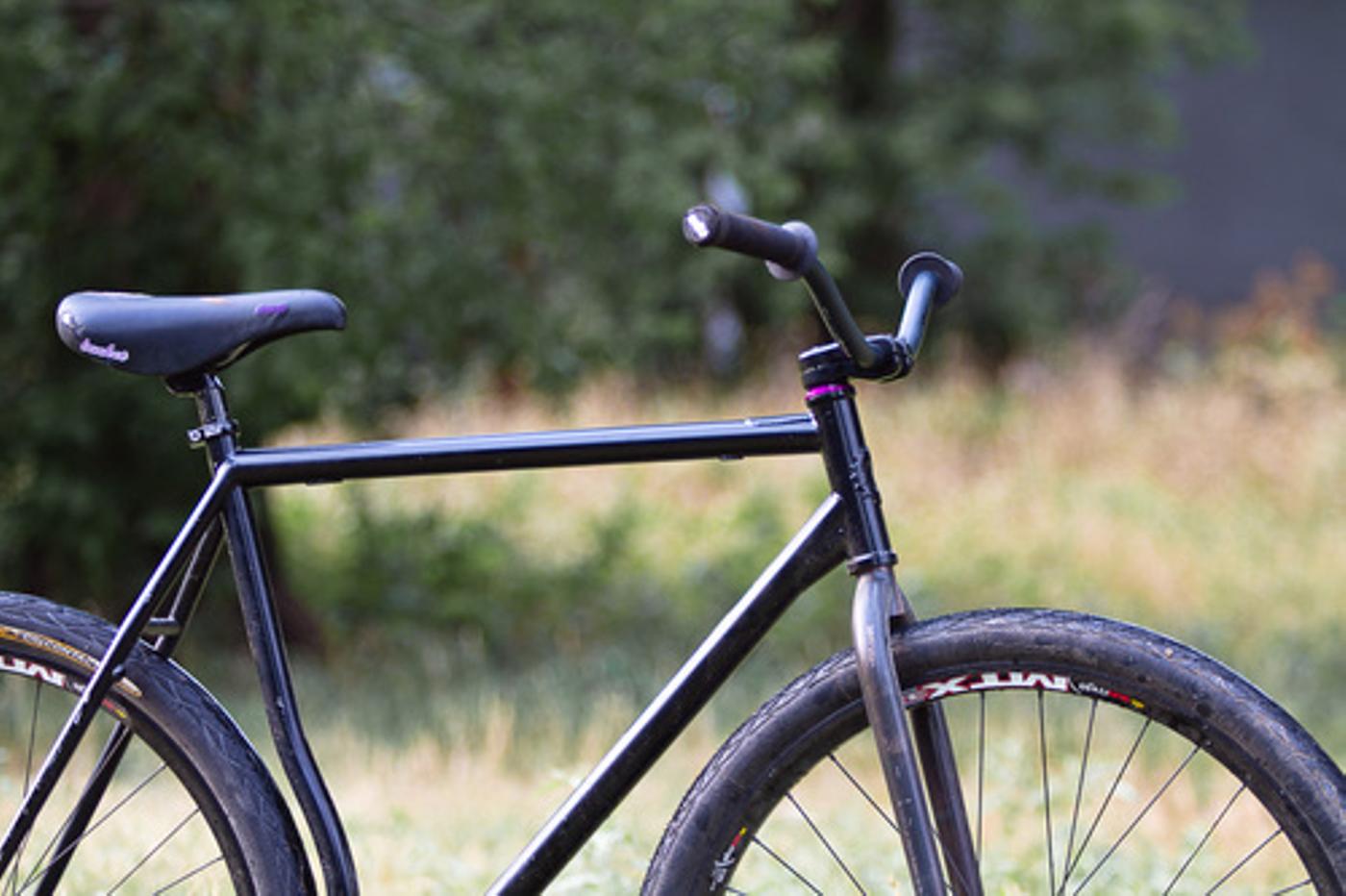 Production and prototyping lead times often get out of hand. Drew over at Milwaukee Bicycle Co. submitted drawings for the V2 Bruiser just prior to Interbike this year and for some reason, it took 6 months to receive the prototypes. That lead time is usually enough for people to lose hope but I knew it was going to be good. The Bruiser was the first fixed freestyle frameset that was designed around a proprietary geometry with a matching fork. At the time, we were all riding a frame with a unicrown fork with a longer ATC to get barspin clearances and it messed the geometry up considerably. Many companies tried to market their normal street fixed bikes with a longer axle to crown fork for barspin clearances but we wanted to do it right.

With a 74.5 head tube angle and a 74 seat tube angle, the geometry was still very much track-like and even though we caught a bunch of flack for lengthening the top tube considerably, it seems that every other company followed suit.

For the Bruiser V2, we stuck to our game and designed a bike that would once again become the standard for fixed freestyle bikes. When you design a bike to fit 2.5″ 29’r tires, your chainstays tend to get longer, making it harder to wheelie. Like the Surly Karate Monkey and other 29’rs, we added a kink to the seat tube, allowing you to slam your 2.5″ tire and make it easier to wheelie. By keeping the HTA steep and lengthening the axle to crown, the frameset is designed to clear a 2.5″ on the front and the rear. While this isn’t the production fork, it’ll give you an idea of what you’re going to be looking at.

Next up, we addressed the rediculousness of the 120 rear spacing and standard dropouts. These aren’t track bikes anymore so why hold on to an out-dated standard? A wider rear end will make for a stronger rear wheel and that’s why we spaced it out for 135mm. Each frame will come with a 14mm axel, 135mm rear hub. Laced to a wide rim, your 29’r or 700c tires will balloon out to a massive size. And we adjusted the chainline to a more fitting number since everyone’s is so screwed up with a 120 rear.

Why go 26″ when you can fit massive tires on a 700c / 29’r wheel? That being said, we raised the bottom bracket a bit to compensate for those 26″ conversions and there’s a 26″ Bruiser coming out as well.

While I’m not going to show you any details of the bike, this is very much a Bruiser and I’ve been shredding the absolute shit out of it. The production model will have a better standover, deeper track ends so you can slam smaller tires and should be out in the coming months. It’s been a long time in the making but man, I’m stoked to have this thing!