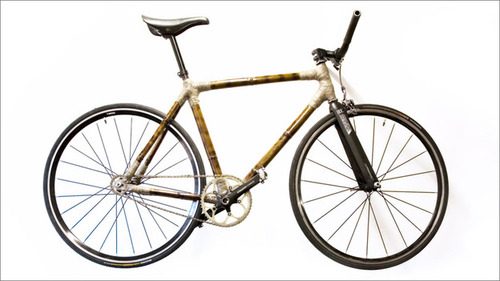 Justin has been working on these bikes for what seems to be ages. He brought one with him to the NACCCs this year and is always riding one around the neighborhood. Along with his partner, Sean Murray, he recently opened Bamboo Bike Studio in Brooklyn.

While I was in Affinity the other day hanging out, a guy came in and said he was really excited to build up a singlespeed out of bamboo. I asked him where he was going to do it and he told me about the Bamboo Bike Studio. Randomly I was searching for it and found a post from NPR two weeks ago. What better way to jump-start your business than a feature on NPR? Now hopefully these two guys can continue to build bikes and educate people on building bikes out of a sustainable (and locally harvested) material.

Check out the full story on Bamboo Bike Studio here, at NPR.