Build Your Bike Early, Or Don’t…

With plans to race the Transcontinental again prior to heading to Kyrgyzstan, Wendy had a bike in mind but we weren’t sure if it would be available in time. A few months went by and my own anxiety about getting her build done well in advance of the events grew and grew. She planned to have the build done by Jeff Bryson at Wheelthing, and we’d work out her packing setup when the frame arrived. Except that it didn’t.

Shortly before Wendy was to leave for the Transcontinental, she still had no bike, and had to make two last-minute decisions. The first was to skip the Transcontinental. Dang. The second was to find a suitable frame that hit all of her needs, and she landed on the Rove LTD. So while this exact bike wasn’t Wendy’s initial plan, and the build was admittedly still rushed without much time to iron out kinks, the bike turned out rad! And in the couple months since returning from Kyrgyzstan, the bike has transformed into a badass commuter. Not knowing what frame we were working with until a week before her departure for Kyrgyzstan, our plan of having a custom set of bags was out as well. Two days before she flew out, Wendy came over to our place, and we quite honestly just started throwing stuff at it to see what would stick.

It turned out the medium Porcelain Rocket 52hz frame bag from Stephanie’s Wednesday fit acceptably, and was a piece we had confidence in. We also sent her out with one of the polka dot Mr. Fusion seat packs from our Wolverines, and finished off the kit with a borrowed Porcelain Rocket MCA and some Randi Jo Fab Bartender bags.

Literally the only part that I was concerned about prior to her leaving was the seat post, a relatively inexpensive FSA piece with a head design that I didn’t have confidence in. I recommended Wendy check those bolts regularly on the trip, and we’d work something else out when she was back. A Matter of Decorum

Last week, Easton’s brand manager Matt Hornland reached out to ask if I wanted to hook up a local rider with their fresh EA90 ISA seat post and EA90 ICM stem. Immediately I thought of Wendy, and lined up a time for me to pick up her bike, install the new parts, and shoot some photos while I was at it.

Let’s get this out there: seat posts and stems aren’t usually very interesting – but cheap ones can sure stand out on a nice build. Since stems and seat posts are meant to match as a matter of decorum, and reliable parts are important for expedition and/or race bikes, I was happy to make this update happen for Wendy. The news with Easton’s new ISA seat posts released last week is all in the post head. The ISA stands for independent saddle adjustment, and it’s a pretty neat system. The saddle rails are clamped by a single bolt, while the angle is dialed in with two coarsely-threaded grub screws in the front of the post head.

Your fore-aft adjustment and your saddle angle can be adjusted independently. Most people will say they don’t necessarily need this, but if it can be accomplished without adding complexity or weight to the system, then I say why not? This new post head is available in the EA90 version you see here, or in a lighter, because carbon, EC70 version. 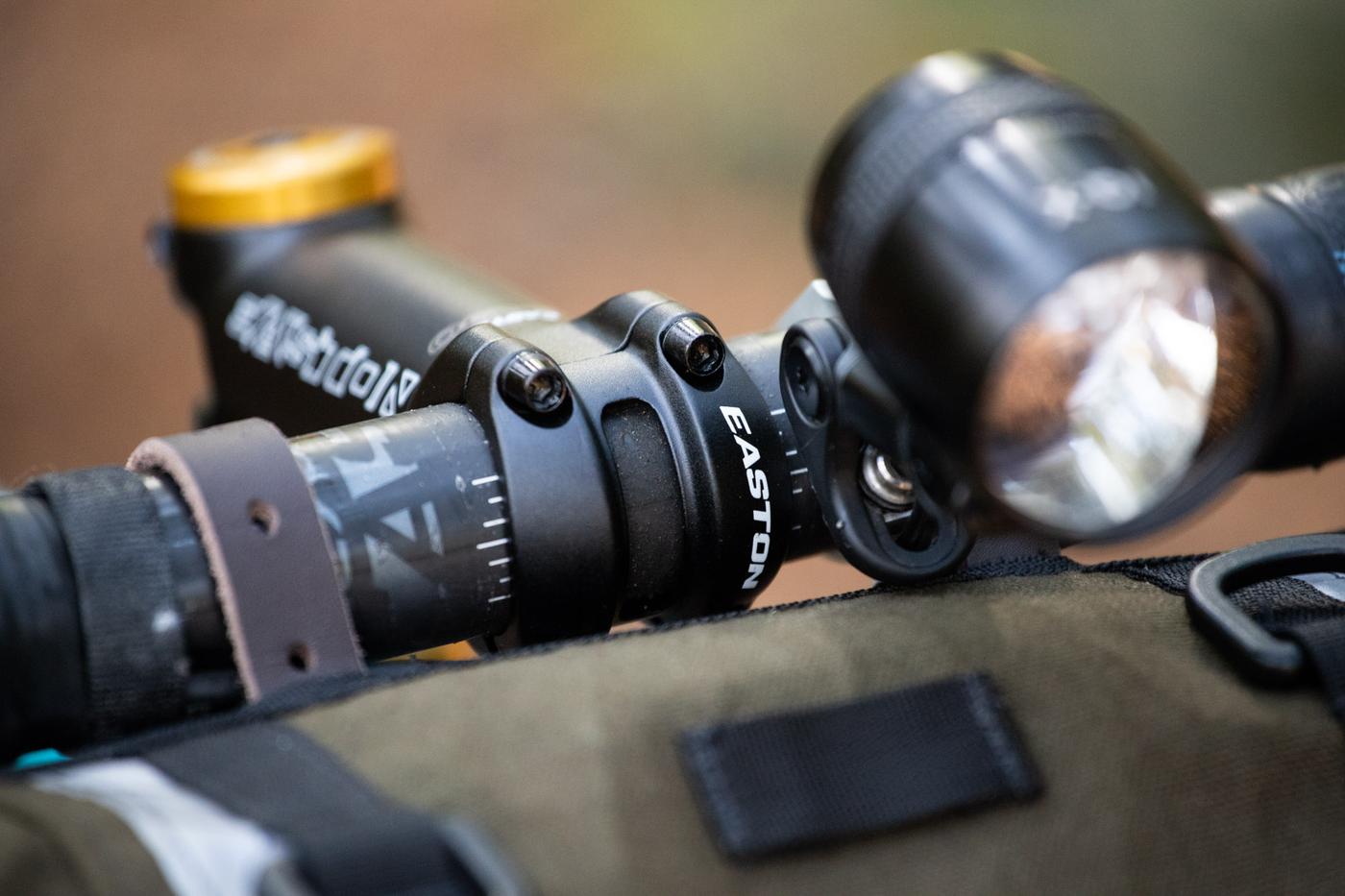 Another acronym! Yep. ICM. Integrated computer mount. Rather than using a Garmin out front mount, this one bolts right to the stem’s faceplate – pretty clean, if you run your Garmin that way. Personally, I tend to run a bar bag and put my Garmin on top of my stem. In this case, given another day with the bike, I would have hacked the ICM to mount Wendy’s dynamo light. But, it’s fender time in these parts, Wendy’s spare bike doesn’t have any, so that’s a project for another day. 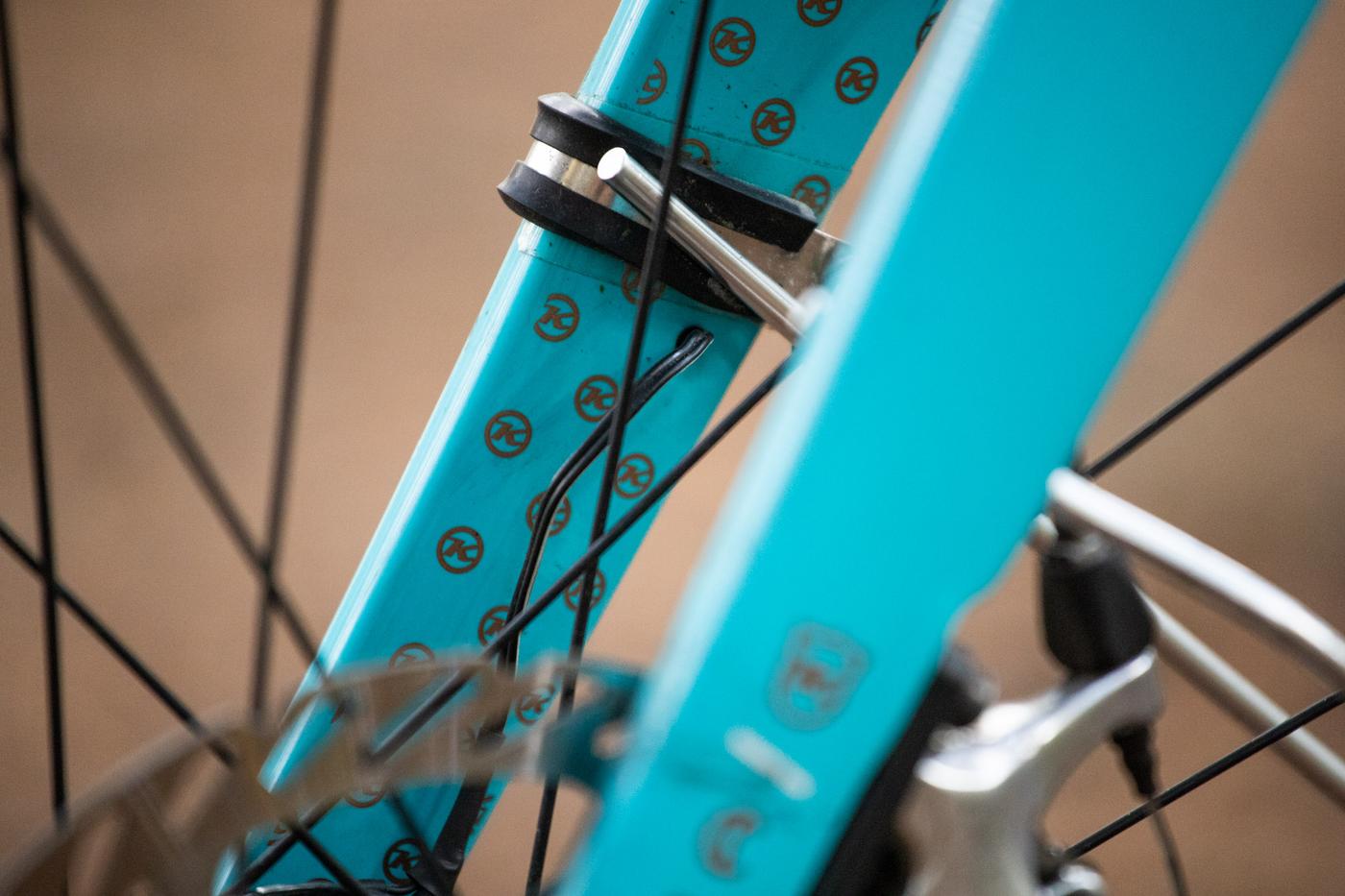 You may have noticed the p-clamp on the right fork leg. When I first grabbed the bike I certainly did, and wondered if the fender boss threads had failed. Nope. Turns out that Jeff ran the dynamo wire through the fork leg before the bike got fenders, and the p-clamp is there so the wiring didn’t have to be disturbed.

Check out the sequence of images starting with the hub and going all the way to the bar-mounted light. The wire goes through the fork leg, up through a drilled star nut, exits through the stem cap, and sneaks behind the stem clamp bolts before heading for the bar. Also, a tip of the hat to our friend Terry for lending Wendy the Paul Comp shifter adaptor that the light sits on – another of the last minute, pre-Kyrgyzstan solutions. This is a theme that resonates so well for me: a purpose-built bike for a big trip or event changes form slightly to become a super useful daily ride. For Wendy, this simply meant fenders and a more adaptable luggage system. The silver Velo Orange Wavy fenders add another dimension to the aesthetic of this bike, and I love it.

For the daily commute, Wendy picked up a Swift Industries Zeitgeist bag. She’s running it on the front, since her saddle doesn’t have loops. For ease of use for the Zeitgeist I suspect she’ll pick up a Carradice Bagman quick release rack, though she could also go with a Hobo Pieces Restuvus to add loops to her saddle. I personally like the Bagman as it keeps the bag off the back of my legs. 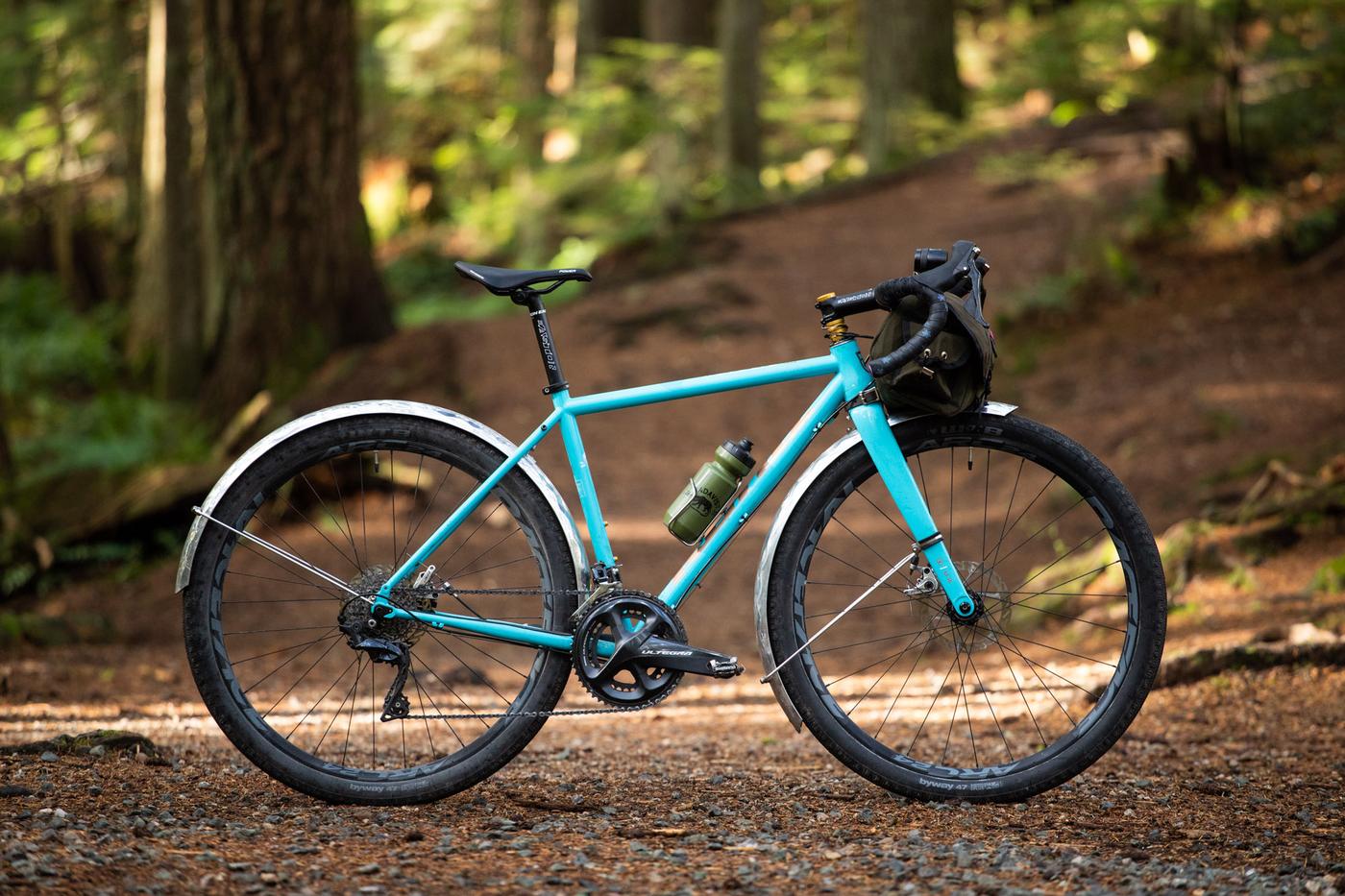 Back to the Silk Road

Reflecting on her experience with at the inaugural Silk Road race, Wendy thinks her Rove LTD is still the right bike for her needs for next year’s event, which she’s hoping to be invited back for. But what else might it need for its dual purposes of daily commuter and remote bikepacking race rig?

One big thing is she will need easier gearing. There are also a few other options in 650x47mm tires that can be considered, though the Byways are a good choice if she’s planning to tackle the Transcontinental again. And, of course, we’ll have more time to sort out her bag setup and packing list.

I’m happy to have had a hand in getting this bike set up, and am even happier that I get to see it on a regular basis since it’s still being ridden daily.