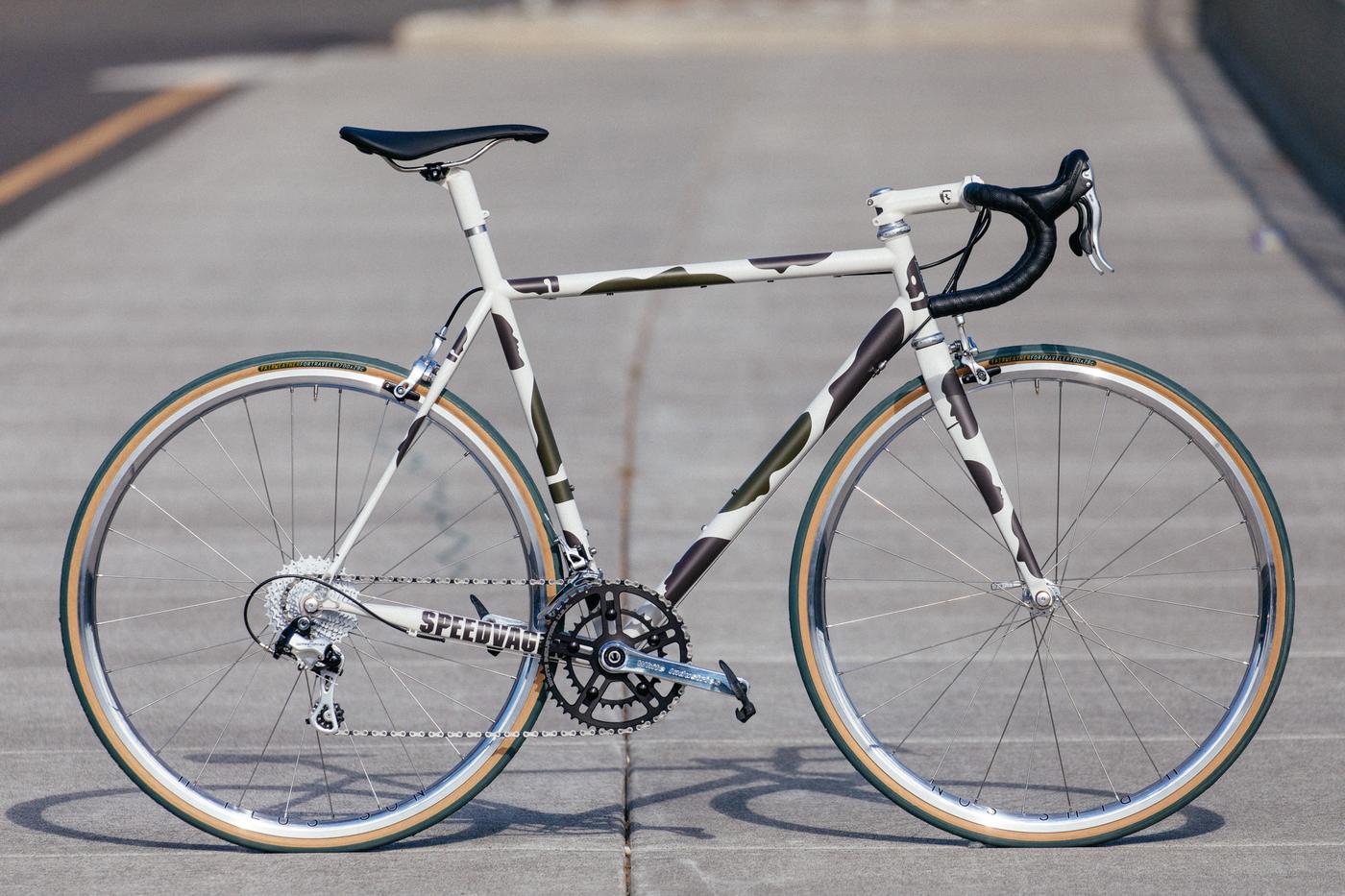 01 – GEOFF MCFETRIDGE – THE VOID ROAD
The Frame is a window

Riding a bicycle is our most intimate way to engage with a machine. No matter how many hours we spend riding a bicycle, that bicycle will never become more human, we experience the joys of being a machine.

A friend of mine once described road cycling as “a way for people to disappear from their families for 3 hours every Sunday morning” There was some truth to this, and could be said more simply (and with less bite) that cycling is “a way to disappear”

By disappearing, you are disappearing from responsibility, family, friends, your self and that is something that has to be reconciled. I have always considered my visits “into the void” as a way to barter with reality. I will trade my time and my commitments for a few moments where I can tone down my existence.

In meditation, I have heard of Buddhist monks ringing a bell to focus a meditation. For me, a bike can be that thing. Familiar, constant, borderless. There is no melody with a bicycle, only rhythm. The bicycle is like a window, it is most important what you see through it.

My design is based around this concept. The space inside the frame. Within the main triangle is the implication of a circle that has to be completed in the mind of the viewer. The other elements are profiles that are part of a pattern or camouflage. These figures are a constellation of points in space that become the circle that is cycling to me. We start as a baby, then there is Marco Pantani for pain and self-destruction, Alan Watts for the dissolution of the self, Sheldon Brown as cycling’s paradigm-shifting mechanical mystic and we end as a skull.

The value of a bicycle is its ability to disappear. At the peak of any ride, your bike is gone, the frame has dissolved, you are no longer just looking at the world like a picture, you have become a part of everything that you see. 02 – THE VANILLA WORKSHOP – DETROIT AGATE ROAD
For a shop build, we wanted to celebrate what it is we do here. Built In-House bikes from start to finish by hardworking people. The starting point for the build was an old bar/stem combo that came in for a repaint. While sanding off the old paint the blends of colors and tones were enough to make us want to paint a bike like this on purpose.

Detroit agate is almost a gemstone like material created by taking chunks of paint from walls and fixtures out of paint booths in major American automobile manufacturing facilities. It is then cut and polished to reveal all of the layers and colors built up over years and years of the manufacturing process. This was the idea we were shooting for. Beauty out of the process.

We didn’t want to stop just with the paint though. To push further with this made in America theme we spec’ed the bike with as many quality American-made parts as possible. The Detroit Agate OG features some of our favorite parts made right here in the USA. Cranks and BB from White Industries. Headset from Chris King. Astral makes rims right down the road in Eugene. Lastly the amazingly functional and pleasant to use Paul Components skewers. To top it all off we made a stem in-house. 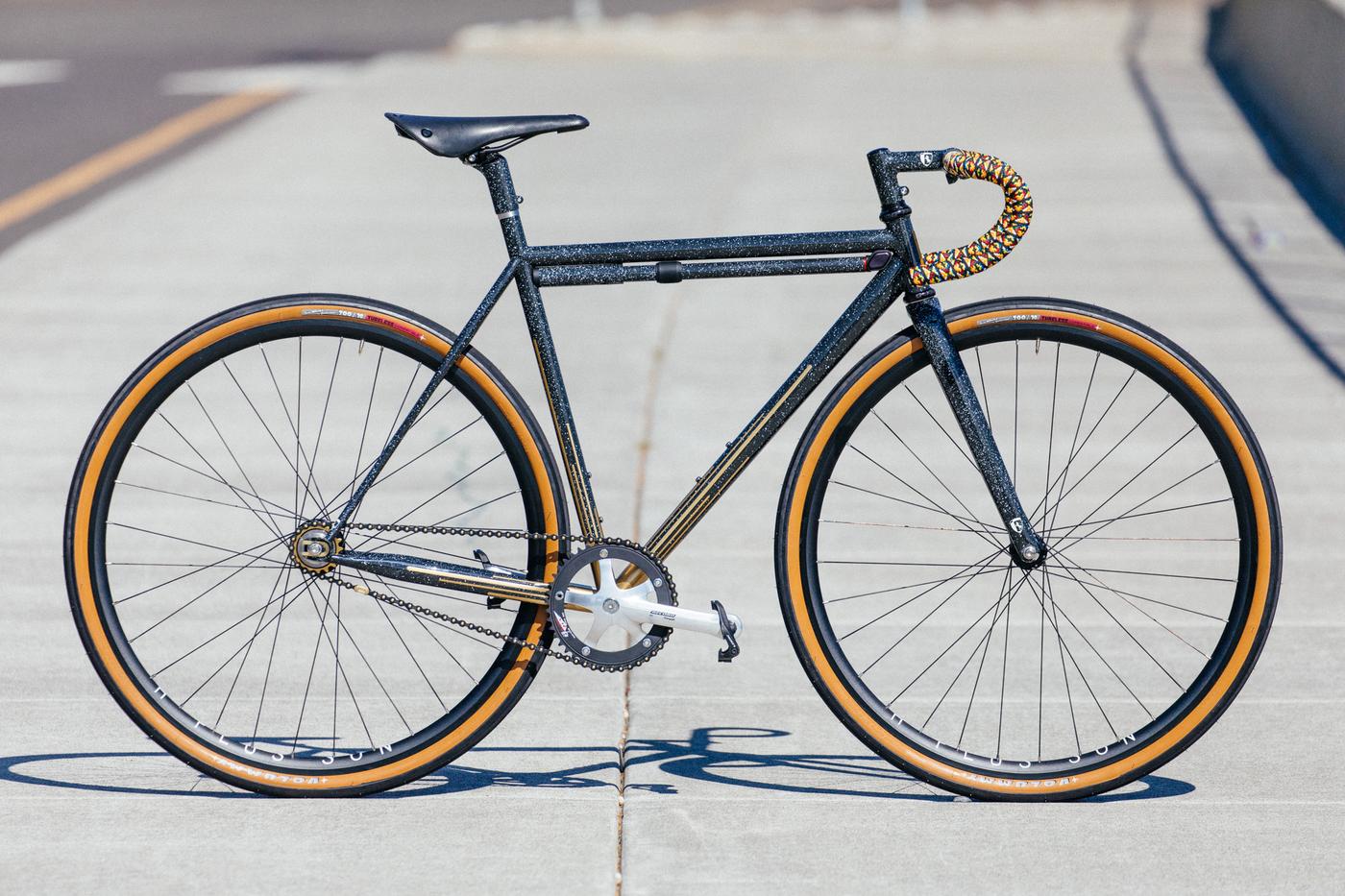 03 – GOLDEN SADDLE CYCLERY – SUN RA TRACK
If the bike industry was a planet, I’d probably not wanna live on it. Yes… things are changing, but a little too slow in my opinion. Small companies and independent bike shops can navigate this space a bit more freely and because of this, an exploration into the unknown has begun. Road bikes are getting fat tires, mountain bikes have become eco-friendly RVs carrying people to places never explored by bike, Cyclocross bikes are making it easier to ride to the single track you used to drive to with your MTB, and commuter bikes have become the greatest Swiss Army knives ever conceived.

Pretty cool, right? We’re pushing boundaries and they’re watching, so keep up the good work everyone!

You ask why because that’s my perfect bicycle. Track Bikes are the reason I am where I am today, the Track Bike legitimately shaped my life. Not sure how many people can say that, but I’m guessing I probably know most of them.

This bike was inspired by the universe beyond the bike industry, a world where everybody rides the bike that makes the most sense for them, not the person selling them the bike. A world of endless fun for hours, because you’re riding the most comfortable bike for you, not someone else. 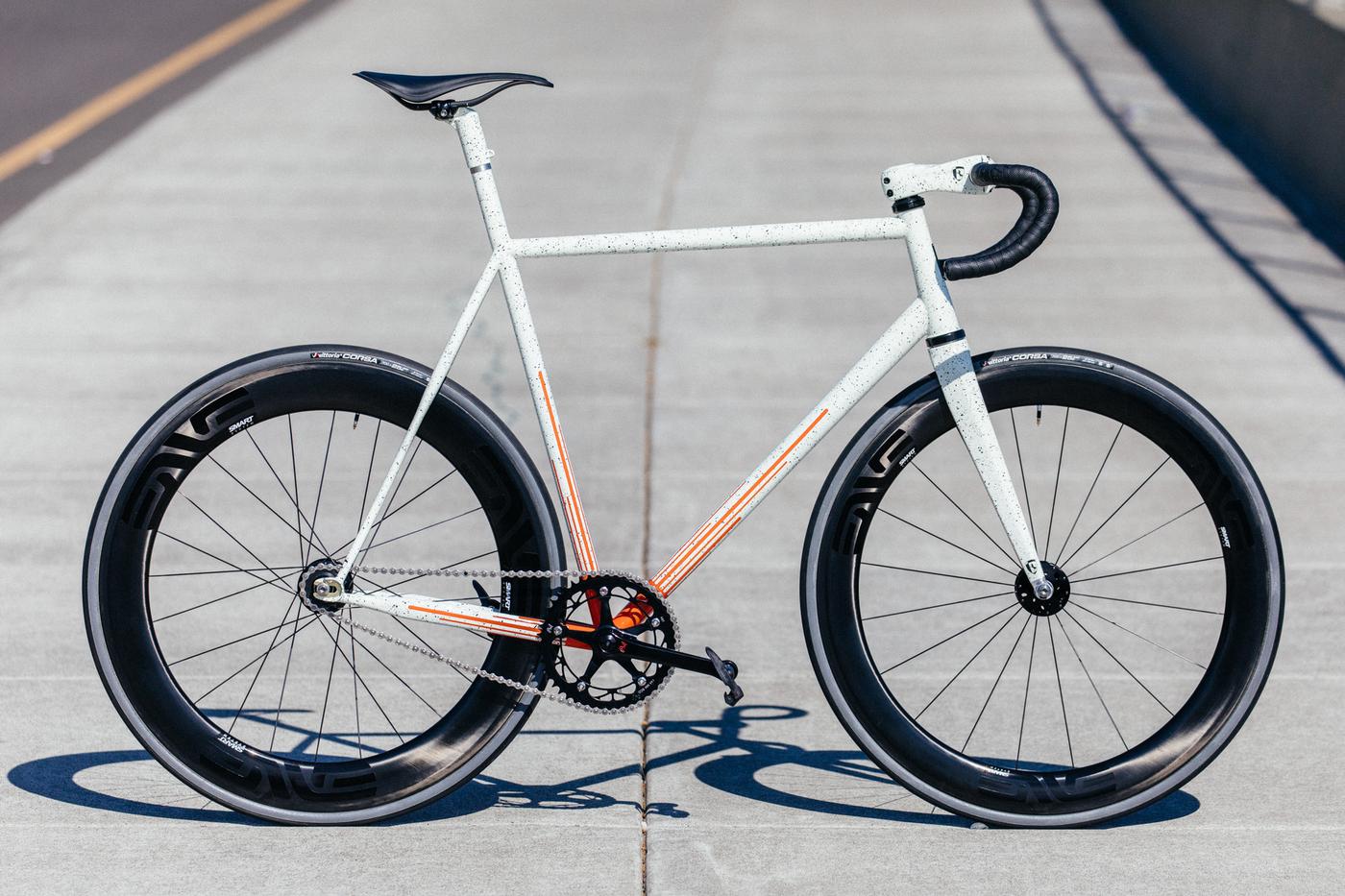 04 – THE VANILLA WORKSHOP / GOLDEN SADDLE CYCLERY – WOODY TRACK
This bike is my space. Its where I go into the unknown. Its where I take chances and risks. The thrill of it fills me up and I feel the energy burst like little stars through my body. It becomes a meditation. A joyous retreat. A focus. It is so simple and ever expansive. All these little moments define cycling for me. The movement through space. Mental or physical. Has changed my life in so many positive ways.

Racing for me has made these moments more abundant. So this bike was built for just that. Racing bikes and being part of the cycling world has inspired me for years. And I wanted to pay homage to that. And what better way than a track bike. Simple. Beautiful. Functional. Fast. One person. One machine. And your space to move through. 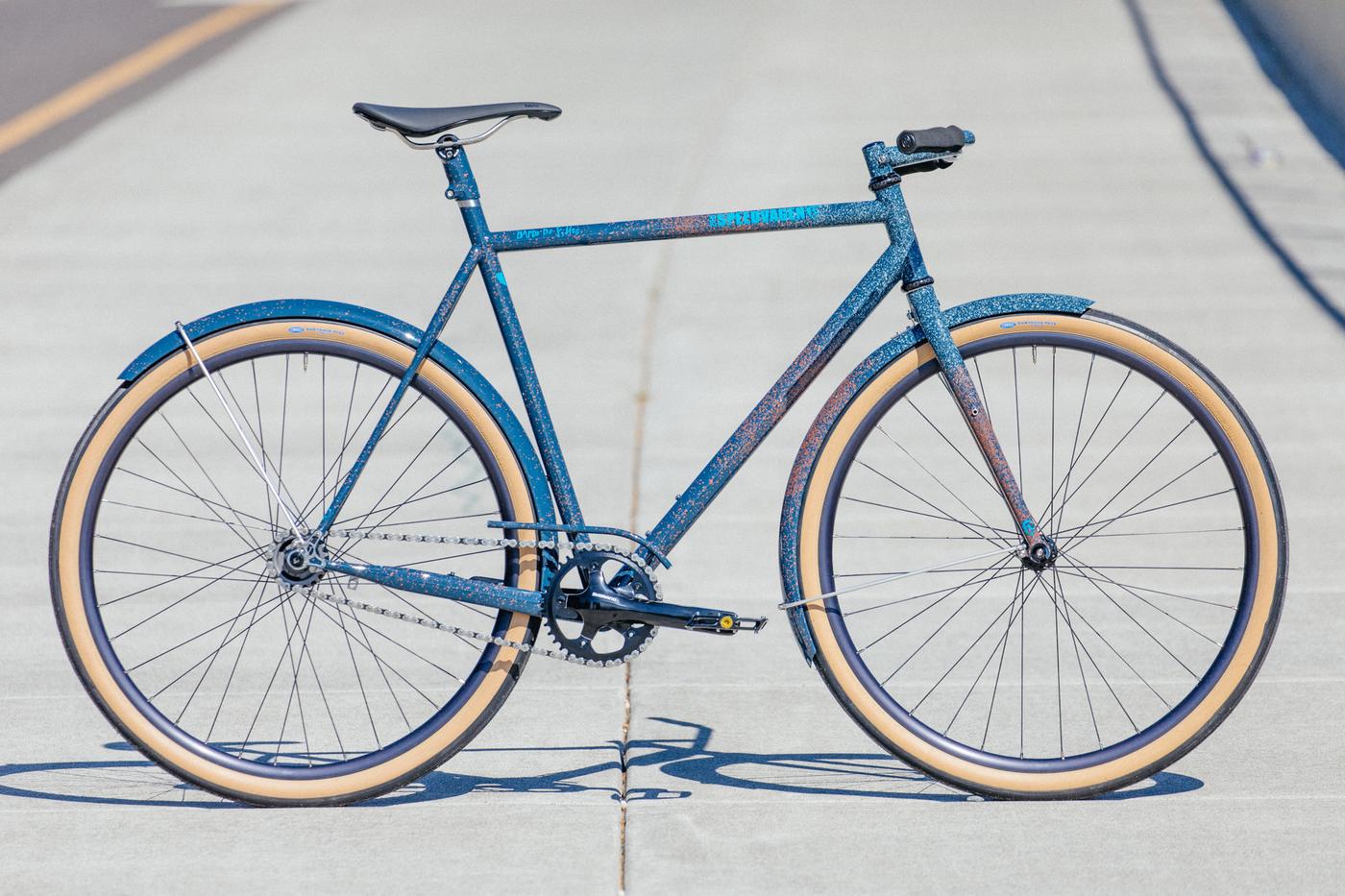 05 – THE ATHLETIC – URBAN RACER
This design came about after we at The Athletic were playing around with ink to create new patterns for inspiration. It was a trip down memory lane to my childhood which was spent watching my Dad race Mountain Bikes in the 90’s.

I wanted something exciting, something which would make me feel like that bike you find under the Christmas Tree that you didn’t expect. Something about waiting for those hot summer days playing with friends in the street until the sunset, carefree and exhausted. It’s a bit of a fairy tale that we are all trying to keep alive.

We tried different color combinations but these specifically make me happy. I googled my dad and found a rider-card of him for sale on eBay. That is hilarious because the colors of the bike are kind of in the same color palette. These colors have probably been hanging there in my head for 25 years to come back to life. His next season bike was a Muddy Fox — black with yellow splatter — then he raced for Cilo and had neon pink and yellow splatter bike. So, you can see where we got that.

Bande De Filles and The Athletic, the coffee cup, it’s all part of this 90s outdoor folklore. I added some women empowerment, a splash of community spirit and a touch of urban with that fancy coffee shop we can find in Portland.

All this while keeping the fun, because I like to keep the mind a little messy like a big splatter on a fancy bike. 06 – PRETTY DAMNED FAST – GTFO STREET
Pretty Damned Fast was born in cities. The absolute freedom of commuting, the thrill of racing at dawn surrounded by skyscrapers, the escape of single track nestled between grand boulevards, these things are cherished and passionately sought after by those who call New York City home. Life in NYC is grand, but life in NYC with bikes is extraordinary!

Pretty Damned Fast is also about visibility. What started as a fashion editor’s personal Tumblr page, back when it was hard to find images that didn’t center on men in cycling, PDF would grow to shine a light on on the greater Women/Trans/Femme cycling community, sharing the stories of incredible athletes who were under-represented in traditional cycling media. Always with a fashion editor’s eye, PDF sought to inspire, elevate and expand what it meant to be a ‘cyclist’.

This collaborative build finds its self at the intersection of fashion, visibility, and the freedom that bikes bring to all those that ride. Inspired by as much by contemporary fashion, the chameleon paint, that morphs in the light, and from different points of view. It is a vibrant rainbow, or almost completely black, depending on the point of view, depending on the light. A bike that is decorated with a subtle reflective material, speaking to PDF’s urban roots, always shining extra brightly at night.

Built around 650b wheels, this bike delivers performance to riders overlooked by big brand geometry. And while this bike is at home on a fashion set or out an about on the city streets, it is capable, adventure-ready and instantly fun. It’s not a wallflower, it’s the star of the show. 07 – THE VANILLA WORKSHOP – GTFO PRO
The Speedvagen GTFO is dedicated and designed with a purpose to squeeze every ounce out of life. In a world where everyone works more and has more responsibilities, those times to get away and be outdoors are important. We believe in the power of being out there, somewhere much bigger than oneself. Optimized around the idea of s24o’s, weekend trips, and day-long gravel events. The GTFO is our most capable, and adaptable platform to date. We treated the design of the GTFO the same way we do with all Speedvagen stripping down and innovating what is left.

After 3 prototypes. We landed on a bike that stays honest to our original intent. Simple, fun, and fast. The GTFO is made to go fast (as fast as you can pedal a single speed, or run it geared… whatever floats your boat). Designed to be lightweight, fewer bag mounts makes packing more selective as well as reducing your overall load. Simply carry what you need, nothing more, nothing less and GET THE F*CK OUT there.

Want to leave work, camp, and be home in time for breakfast with the family? So do we, that’s exactly why we built this bike. Have a gravel event coming up? Ditch the bags and its ready to race. Want a more beefy version of the Urban Racer just to have some extra fun on your way to work? It’s good at that too.