Beneath the coniferous canopy of an Antwerpian pine forest, somewhere close the Dutch-Belgian border, I’m standing and waiting to hear my name. It’s the final of the DVV Verzekeringen Trofee, one of the two major cyclocross series in Belgium. The announcer rattles off the names of the cycling superstars who will line up in front of me. World Champion Mathieu Van Der Poel, Belgian National Champion Toon Aerts, Czech National Champion Michael Boroš…there’s about 30 more. I’ve been champion of a few group rides in California, but I’m not sure that news has made it onto the announcer’s list of fun facts. 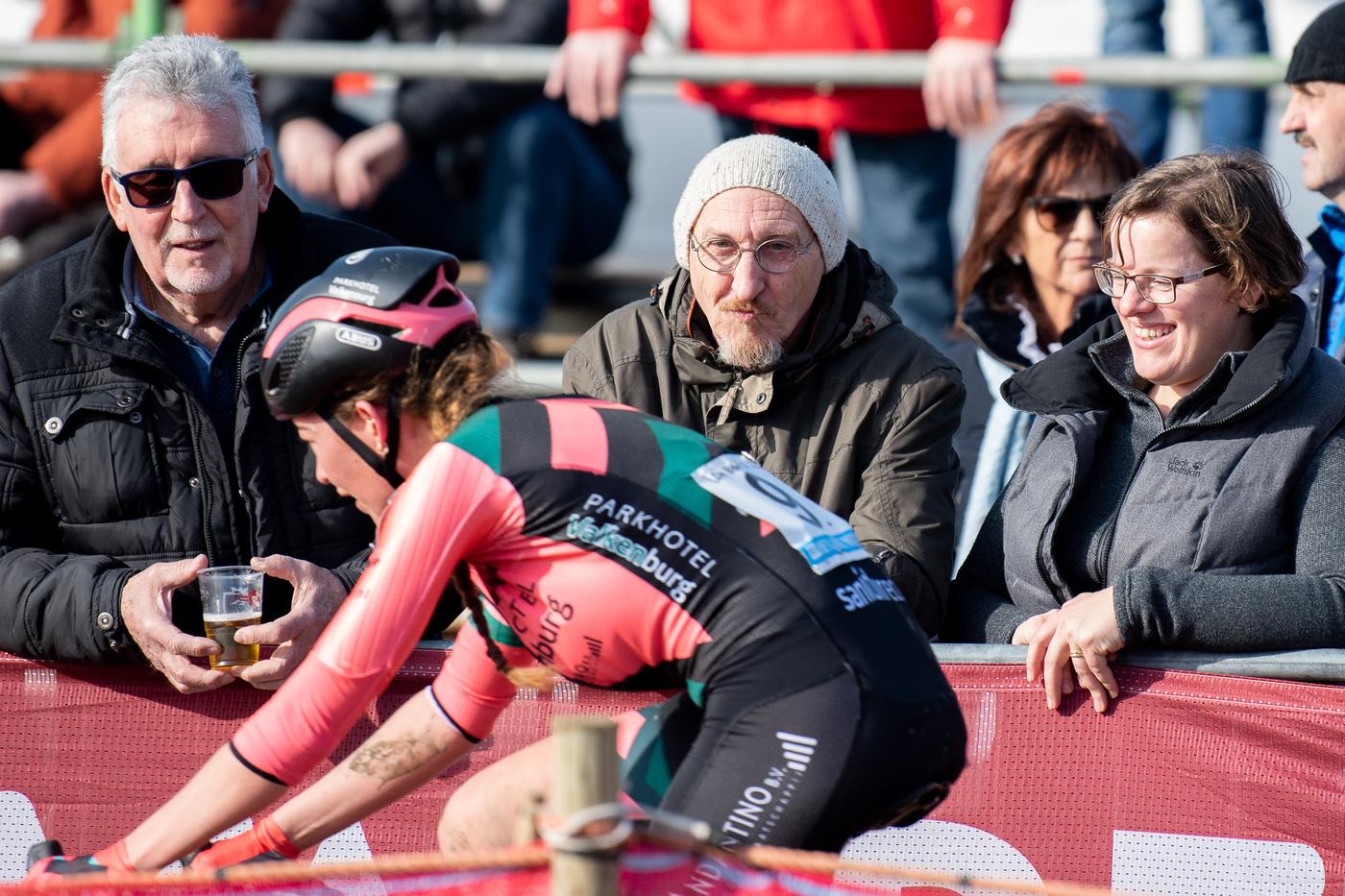 “Aaandrooo!” It’s my name but not over the loudspeaker. I turn and look. There is all five and a half feet of Lieve, her bespectacled face wearing a warm smile under a perm of white hair. Her and her tan fur-hooded coat waved in my direction.  I smiled and wave back, a brief pause from the focus I’m currently trying to muster.

I first met Lieve, a sixty-something-year-old from East Flanders and a cyclocross superfan, a year and a half earlier, during my first trip to Belgium. I was standing outside my car, riding the trainer before a race. She walked up to me then and tapped me on the shoulder. Even sitting on the trainer, I towered over her. She barely came up to my chest.

“Foto??” she asked in a thick Dutch accent, pointing at me, her, then handing her phone to her husband, Rik. How could I possibly say no? 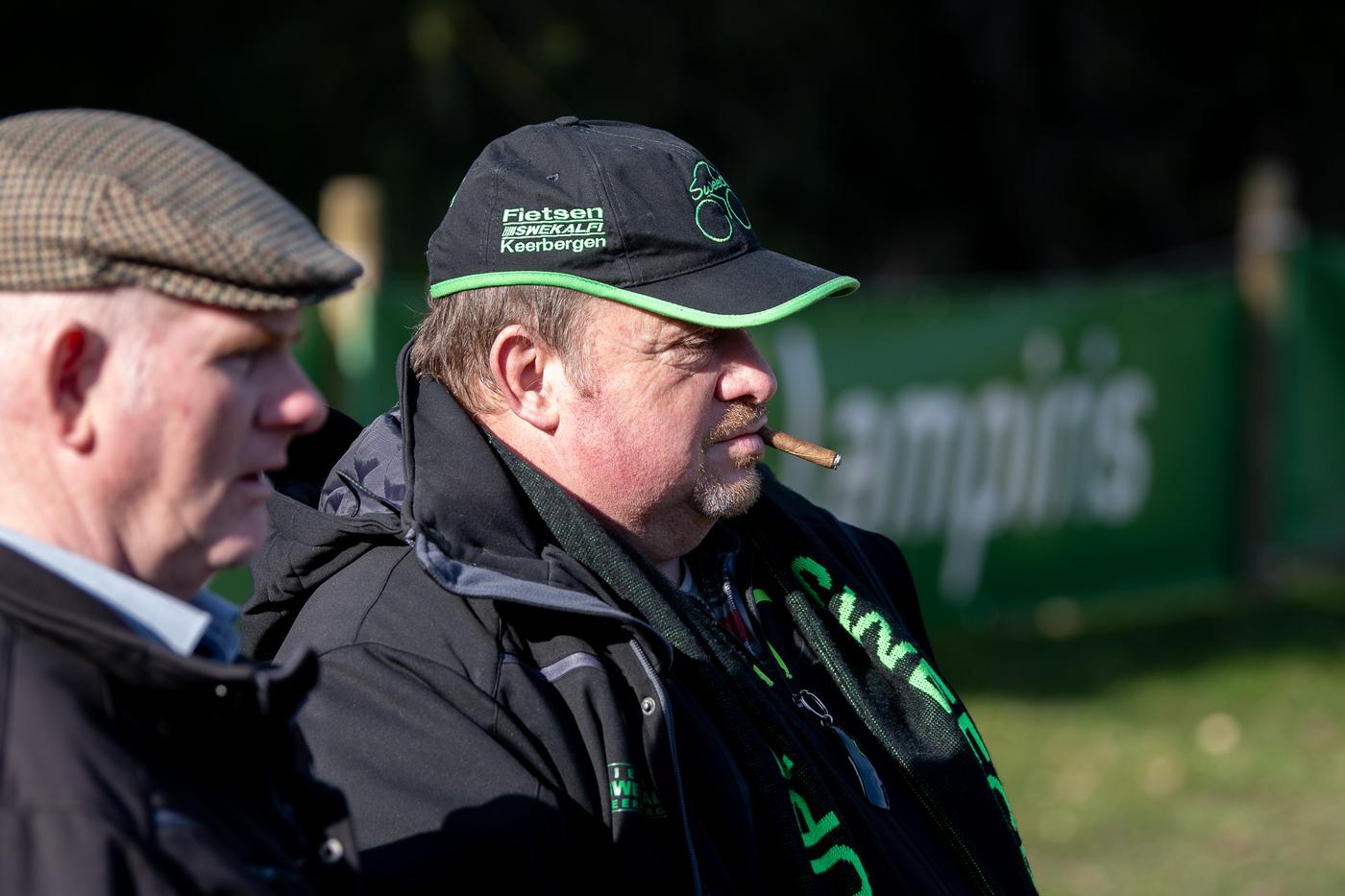 For the next four months, Lieve would find me at races. From the dark alleyways of the Superprestige Diegem to the pouring rain at the New Year’s race Baal. She didn’t always want a photo. Usually, she just wanted to say hi.

Then we’d just look at each other and grin. The extent of my Dutch reached about as far as her English. Still a word here and a gesture there was enough to get by.

After she saw my partner, Annick, and I, standing outside on a rainy race day (station wagons are not the best winter cyclocross vehicles) she invited us into her motor home. In we tromped from the soggy muddy fields, stepping into a different world. It was a dry cozy living room, complete with a little white dog and a little TV broadcasting the bicycle mayhem right outside the door. 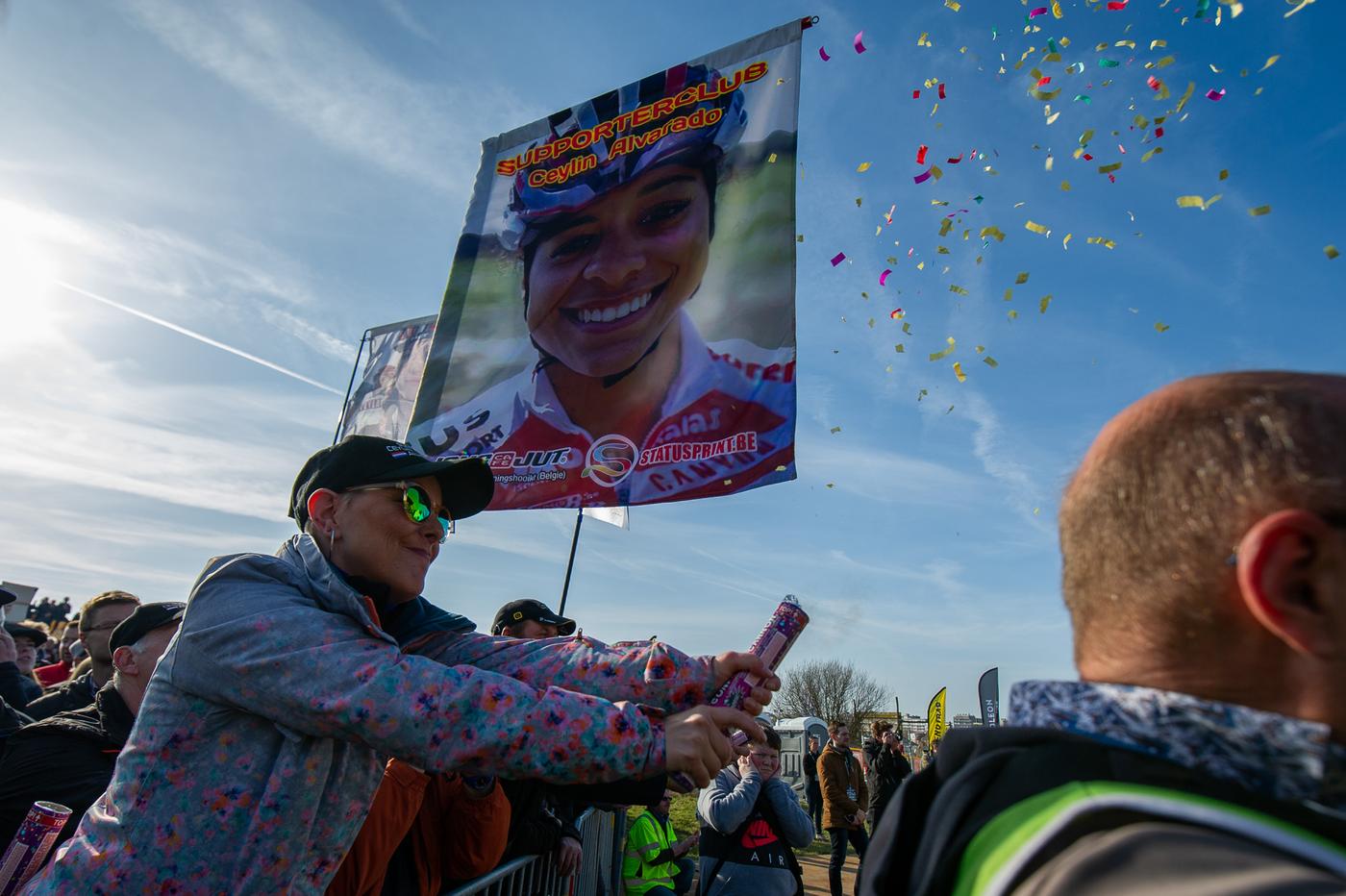 “Cooky?” she’d ask, pushing a plate of pastries in front of us.

“Cooke?” she’d inquire pulling pops out of the fridge.

There I sat, munching cookies 6,000 miles from home, and about a decade removed from my last grandmother, being treated, nay doted over like some long lost descendent.

She pointed to the cabinet where of photos her other cyclocross grandchildren hung. There were pictures of Lieve with Lars Van Der Haar, the pint size Dutchman whom she affectionately calls Larski. There were shots with former Japanese National Champion Yu Takenouchi. Photos of her favorite local up and coming Belgian junior, Justin Laevens, also hung on the wall. And there, in the gallery was some furry Californian from New Jersey sitting on a trainer.

My name blasts over the loudspeaker.

There’s the summons I’d been waiting for. I roll toward the line assuming my place at the back of the mostly Belgian pack. Two minutes later we are sprinting down the start straight, accelerating toward the bottleneck that dives into the pine forest.

The next 45 minutes are a hypoxic blur of sandy ruts, loamy flow and teeth gritting headwind. Like most of my races in Belgium, I’m fighting to stay on the lead lap, no easy task when World Champion Mathieu Van Der Poel has the bit between his teeth, en route to winning his 30th race of the season.

As each lap ticks by, I’m losing about 45 seconds to him each lap. I roll through with three to go and have a 2-minute cushion. “I’m gonna make it to the last lap!” I think as I crank along the start/finish straight.

Alas, eight and a half minutes later, as I pop out of the forest ready to accelerate into the final two laps, the official steps out and blows his whistle. 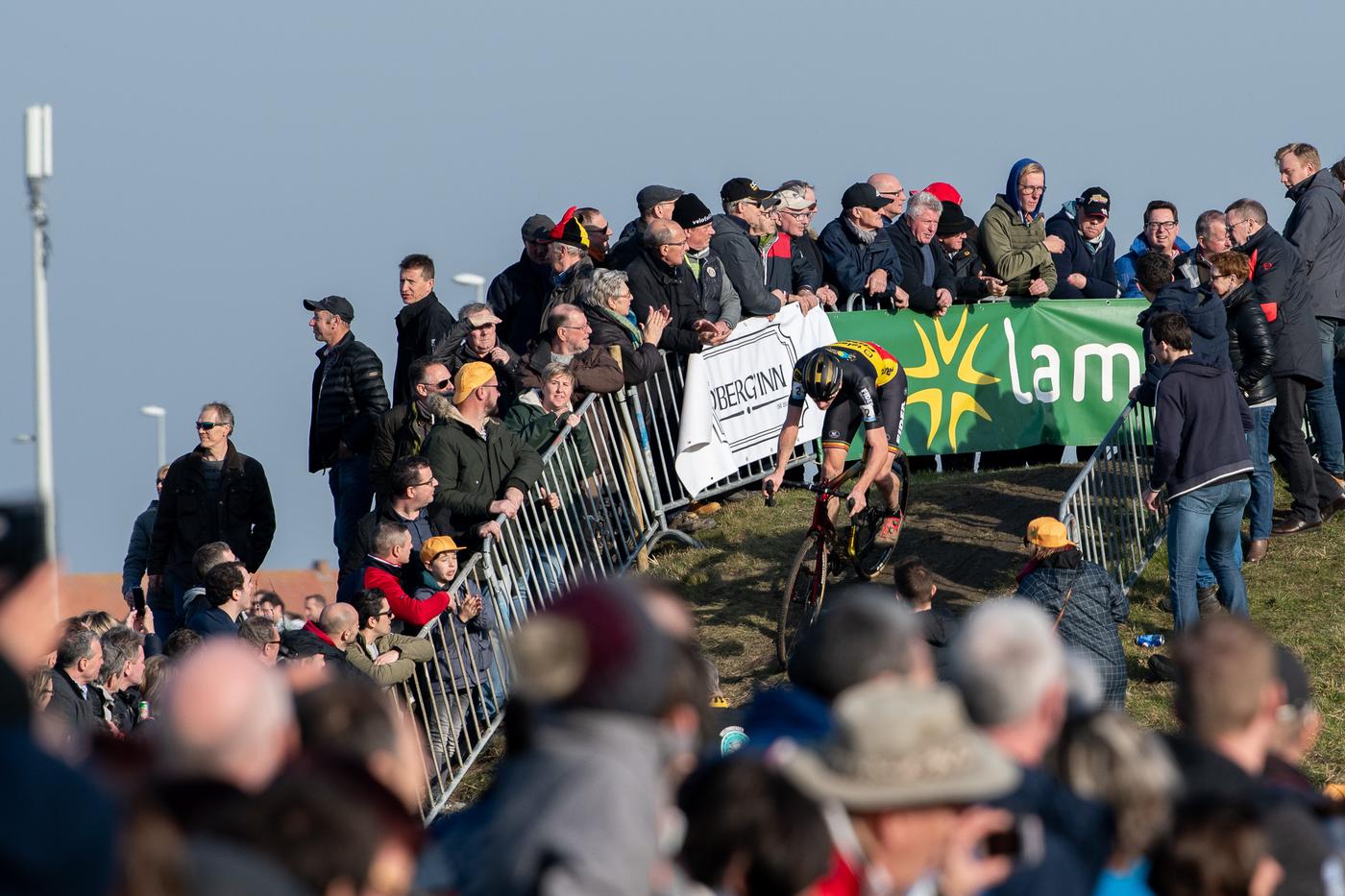 “ARE YOU FUCKING KIDDING ME?” I scream. A month of listening to uncensored, Belgian radio has convinced me the Flemish are relaxed regarding outbursts of public profanity.

“80 percent rule.” The official says, referencing the guidelines that determine when the leader is close enough to prematurely end your day.

“Bullshit!” I yell, looking at the clock that indicates I still have a minute and change to make it to the final lap.

“It’s not my fault you don’t ride faster…”

“YOU’RE FUCKING WRONG!” I scream between gasps of breath. The blood tasked with maintaining my filter is elsewhere, letting unfettered New Jersey out of its cage.

We argue long enough that I’d now be well into my seventh trip through the sand. Still, no Mathieu. I know I’m right. But there’s nothing I can do. Right or Wrong. 80 percent or not. He has the clipboard. He has the whistle. My race is done.

I turn and see Lieve. Her smile has a touch of sympathy. She doesn’t seem to mind the outburst or my subpar performance. She reaches over the barrier to pat my shoulder.

“Foto?” She asks. She hands her camera to her husband and scurries onto the starting grid.

She’s beaming now. She doesn’t care that I got pulled. To her it doesn’t matter. It matters that I’m here.

I smile too. How could I not? 80 percent of a Belgian race day sure beats a 100 percent of just about anything else. 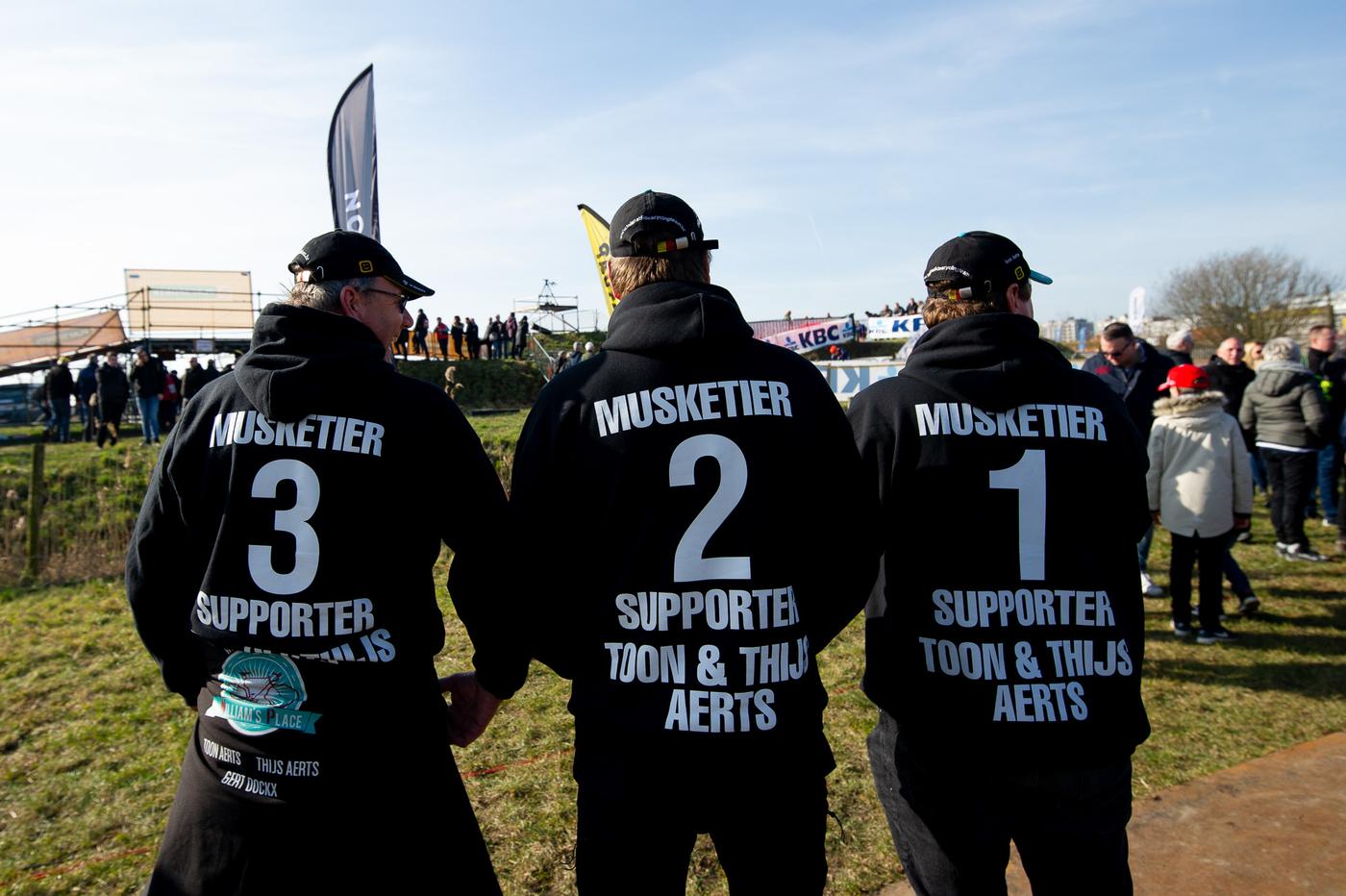