Robin Todd, 57, wants you to know that you can do big things, and that a grilled cinnamon bun will help significantly at the end of a long rainy day.

Last fall, Robin bikepacked alone for 6,800 kilometers (4,225 miles) from Vancouver, British Columbia to Cape Breton, Nova Scotia. She’s always been an adventurer, but this journey across Canada was done in part to prove that age isn’t a factor when it comes to adventure, especially for women. 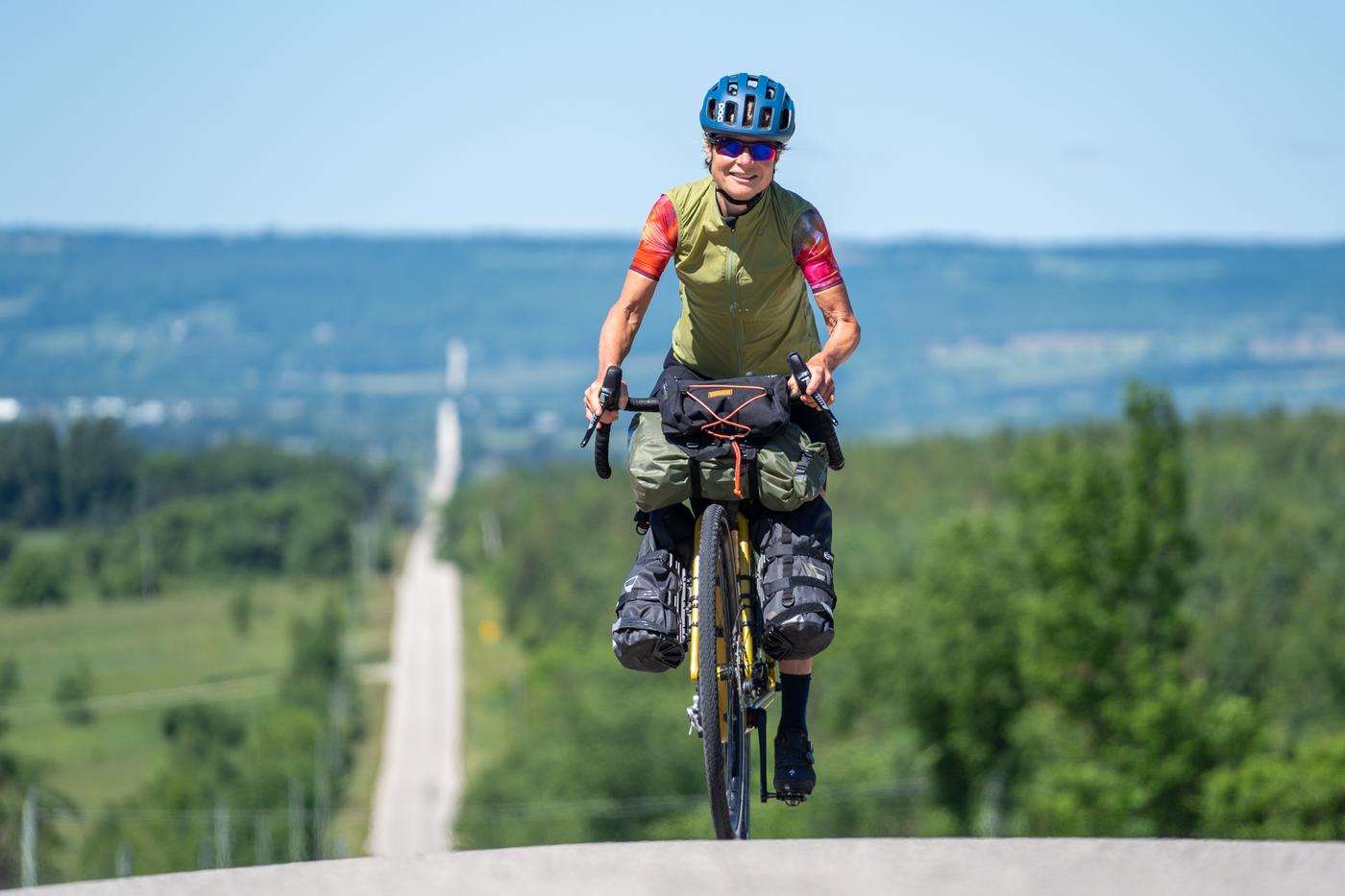 After teaching high school English for 30 years, Robin was ready to retire. And to mark the end of that chapter, she wanted to go on a big, solo bike trip. “I had a couple of friends who had gravel bikes and were raving about them, but I couldn’t really visualize it. And then I started doing some research and thought, Okay, I’m gonna get myself a gravel bike as a retirement gift.” Robin had dreamed of doing this trip since she was a teenager, when she waitressed in Banff National Park. That was before clipless pedals or disc brakes or true gravel bikes.

And she did complete the solo ride — from Lake Louise to her home in Guelph, Ontario (covering over 3,500 kilometers) when she was in her 20s. “I told my parents on the phone and my mom was in tears, just really upset.” They couldn’t understand why Robin would want to do something so big and intimidating alone. “So I was like, Okay, I’m not not going to do it now, but I will do it, so be ready. And then I did it two years later, and I loved it.” That trip proved to Robin that she liked doing big things alone. It planted the seed for other big adventures. Robin spent 6-months bikepacking around Hawaii, Fiji, and New Zealand, and loved the freedom of it all. But life took over. She returned to Canada, got her degree, and settled into a routine of teaching. Still, she always pursued big challenges and physical feats, including several triathlons and marathons. Then, when retirement approached, Robin’s mind returned to big solo days on the bike. And eventually, she decided on a route. Essentially, the entirety of Canada. Robin’s trek last fall took 40 days — with only one complete rest day. She climbed more than 37,000 meters (121,000+ feet) in total, and averaged 170 kilometers (105 miles) per day. Robin’s partner, Phyllis, met her at the end with a trophy, a tiara, and plenty of celebration. 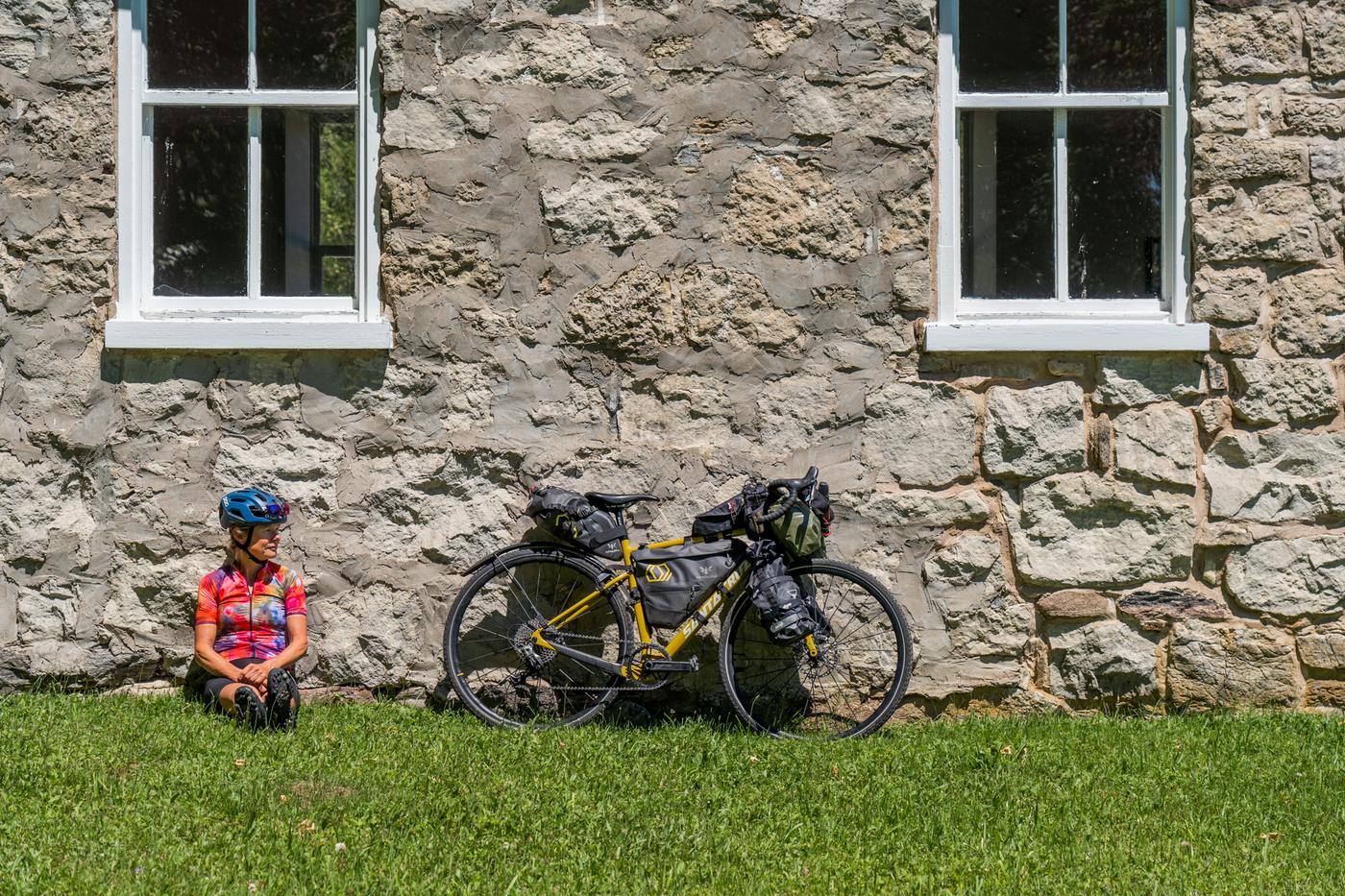 The in-between, though, is what Robin was really after — the things that would happen along the way. The encounters that couldn’t be planned for or rehearsed. For Robin, those are the things that remind her what it means to be human. The whole trip was like directing a film without seeing the script. So she set out — August 30, 2021, kilometer zero.

“I think my longest day wasn’t the longest mileage day, but it was 3,200 meters [10,500 feet] of climbing in the Rockies. That was probably a 13-hour day.” Robin noticed that lots of people, upon learning what she was doing, told her that she didn’t have to do it. Or that there was an easier way — around passes and avoiding tough sections. They told her she didn’t need to suffer so much. But, that’s not the way Robin saw it at all. The climbs make the descents that much sweeter. The questionable sections build character, and make the whole thing worthwhile. “This guy said to me, ‘You don’t have to do that — you could cycle down to the end of the lake and take the ferry across.’” But Robin was there to ride — all of it — the mountain passes, the sketchy sections of road, the things that others avoided. She had her fears — after all she was more than 30-years older than when she had last done something like this — but she took it one day, and one hour at a time. She generally moved at an impressive clip, but there was no rush. 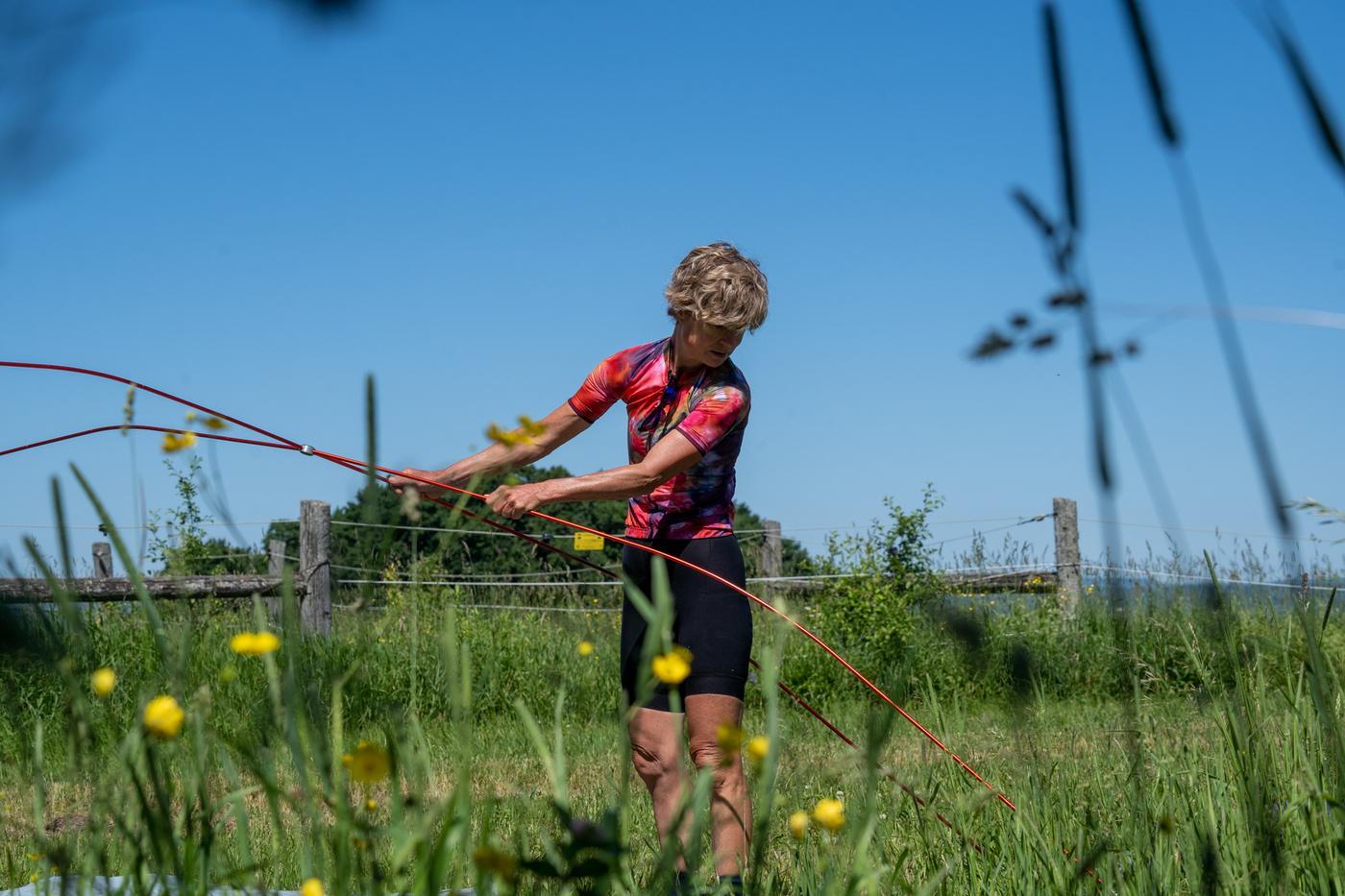 Robin split her time fairly evenly between camping and staying in motels. “My mom and her friend very sweetly sent me some money for my hotel fund, saying ‘When you’re comfortable, we’re comfortable.’” As the daylight hours grew shorter, sometimes it was easier to pull into a motel than it was to find a campground and set up a tent. Robin didn’t make much of a plan before she began the trek — she decided to see how it went. She stopped when she got tired, ate when she was hungry, and interacted with those she met along the way. “I was pretty much on a high most of the time. Obviously from endorphins, but also I never forgot how incredibly privileged I was to get to ride and do what I want.” Robin found that she felt cheerful and appreciative of everyone she met. “People would tell me to be careful, and that there are a lot of crazies out there, but I just kept meeting kind, helpful people.” 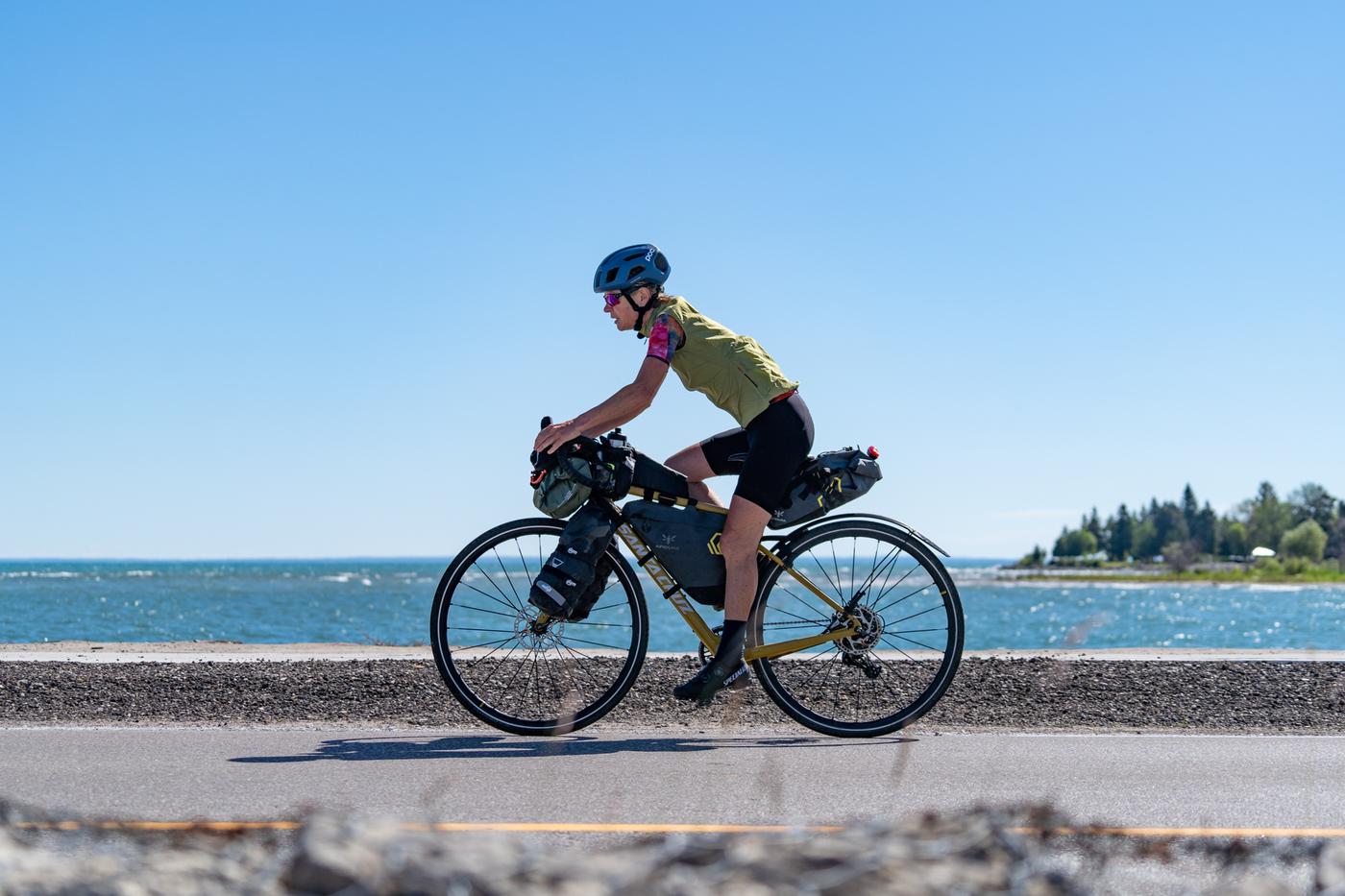 When Robin had low moments, she always seemed to find someone to lift her out of it. Sometimes all it would take was a friendly honk and wave from a passerby. And whenever she saw a fellow cyclist, it felt like she was part of something bigger. “Probably the shittiest day of riding was in northern Ontario. The roads were quite narrow and the shoulder was minimal. A ton of truck traffic — logging trucks.” To add insult to injury, it was also incredibly windy and raining. “I felt like I was crawling along. So I stopped for the day. I had just checked into the hotel and came out to get my bike, and this other woman wheels in on her bike.” Robin wasn’t used to seeing many others on bikes, and almost never a woman. “Her name was Joy. It was just so perfect. And she was really sort of effervescent. We stood in the parking lot and chatted for half an hour.” They talked about gear and bike setup, but mostly they found relief in meeting someone like minded. “That changed the whole day. I had been really ground down and tired from the traffic.” Interacting with Joy was exactly what Robin needed at that moment. 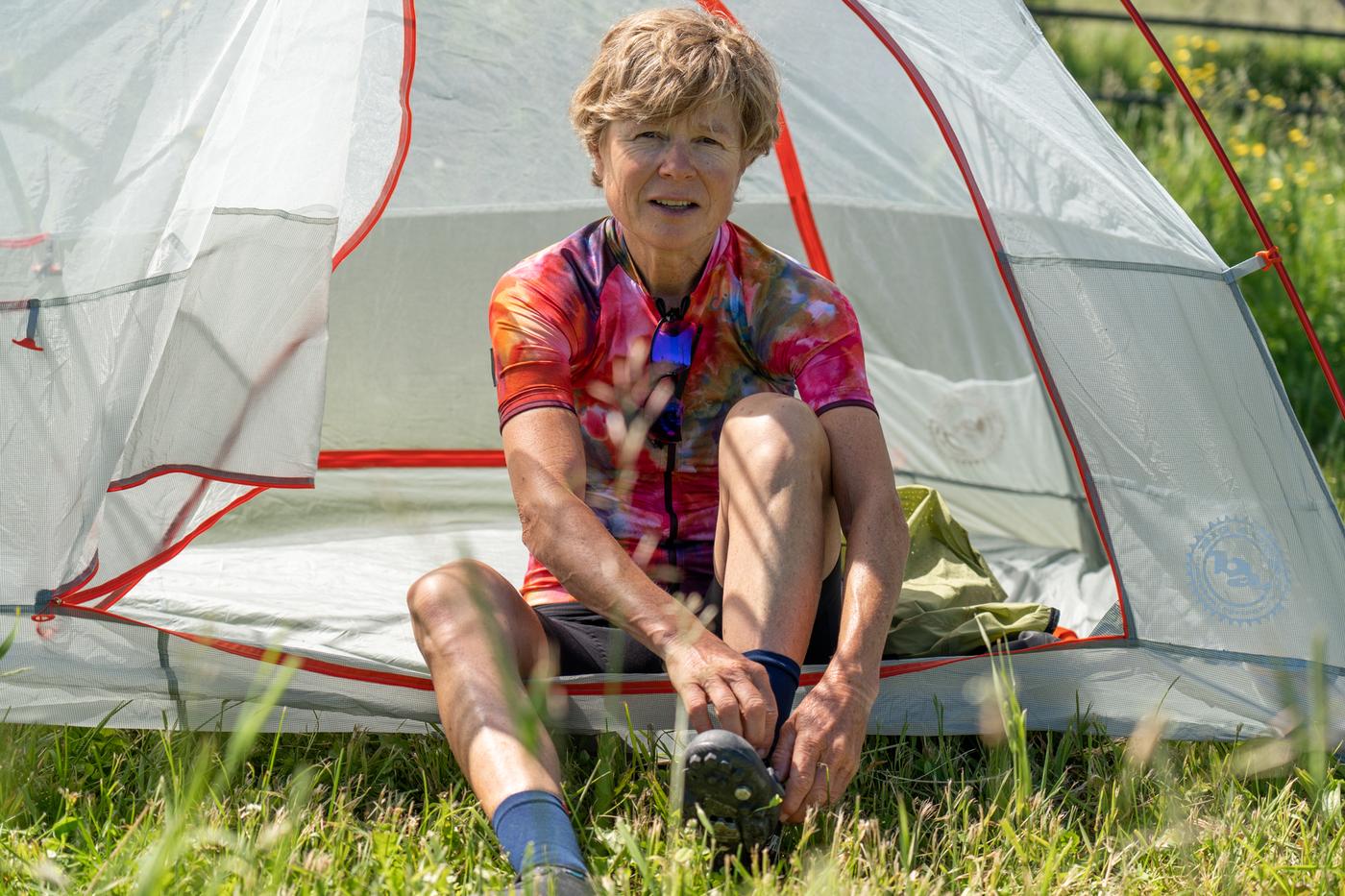 Someone once said that even the most expensive meal with the rarest ingredients at the most beautiful restaurant in the world can’t compete with roadside snacks after a full day of riding in trying conditions. A late-night hot meal when you think for sure nothing will be open can restore your faith in the world. Toward the end of Robin’s journey she stopped in a tiny town hoping to find a motel and a meal. “I thought I saw a motel on the map. So I go to this place and it’s like something out of Psycho. There’s a lockbox on the office door and it says ‘Call this number.’ I don’t know why I called the number. I looked around and realized, I don’t know if this place is abandoned or not, but I’m not staying here.” So she pedaled down the road and saw a restaurant. “I thought, nobody lives here, who would ever have a restaurant here? I thought, it’s gonna be closed. But there’s a little open light glowing red. It’s dark skies. It’s going to rain any minute.” Robin went in and found a woman wrapping cutlery in napkins. She greeted Robin like some sort of dream. “I’m like, ‘Oh, yeah, can I get perogies to-go?’ And they also had grilled cinnamon buns.”

Robin stuffed the food in her bag and could feel its warmth as she pedaled. It was all she could think about as she made her way to a campground. When she finally got settled, she climbed in her tent — out of the light rain that had started falling — sat cross-legged, and fully enjoyed the food. “I ate that cinnamon bun and it’s fair to say that it was the best meal of the trip. And then I went to their little convenience store and I think I had two big chocolate bars, too.” 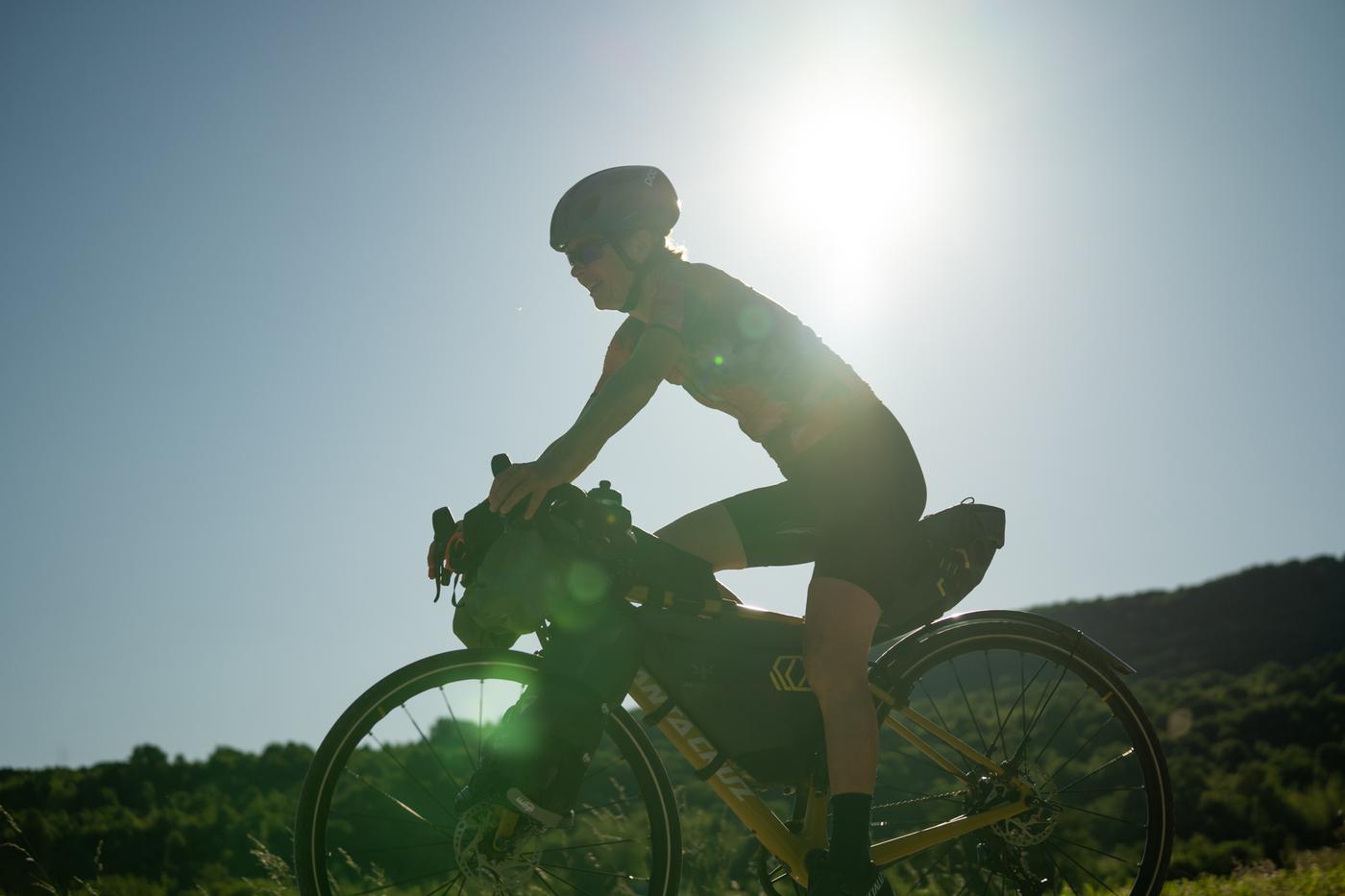 Through all the physical and emotional ups and downs, Robin never had so much as a flat tire. She purchased new wheels right before she left, and a friend gave her a bottle of chain lube that cleans and lubes. “Every night I would wipe down the chain and then put that [lube] on and then wipe it again. And I was fine.” She did what she could to prevent things from going wrong, but tried not to worry too much. “I had one day with really bad rain and I was on gravel in Quebec. [My chain] was just grinding away. So I stopped at a gas station to hose down the bike. I got as much grit off as I could.” Mostly, to Robin’s relief, it was smooth sailing.

So what do you do after 40 days on the road, riding and surviving? Transitioning from road life to home life always involves an array of emotions, including a bit of a down spell. But Robin was perfectly happy to relax for a while. To eat ice cream and enjoy dog walking at a leisurely pace. But it wasn’t long before she was itching for the next adventure. This summer she’ll set out to bike west to east across Newfoundland. This trip will take 2-weeks and is different from the trek last fall in that Robin planned her day-to-day goals more thoroughly. “I have every night already booked [at a campground or hotel] because it’s what Newfoundland calls ‘Come Home Year’ and people come in droves. Even when I was booking things in April I was finding campsites already filling.” Although extremely popular in the summer months, Robin is especially looking forward to seeing Gros Morne National Park, known for its fjord cliffs, barren beaches, and deep forests. 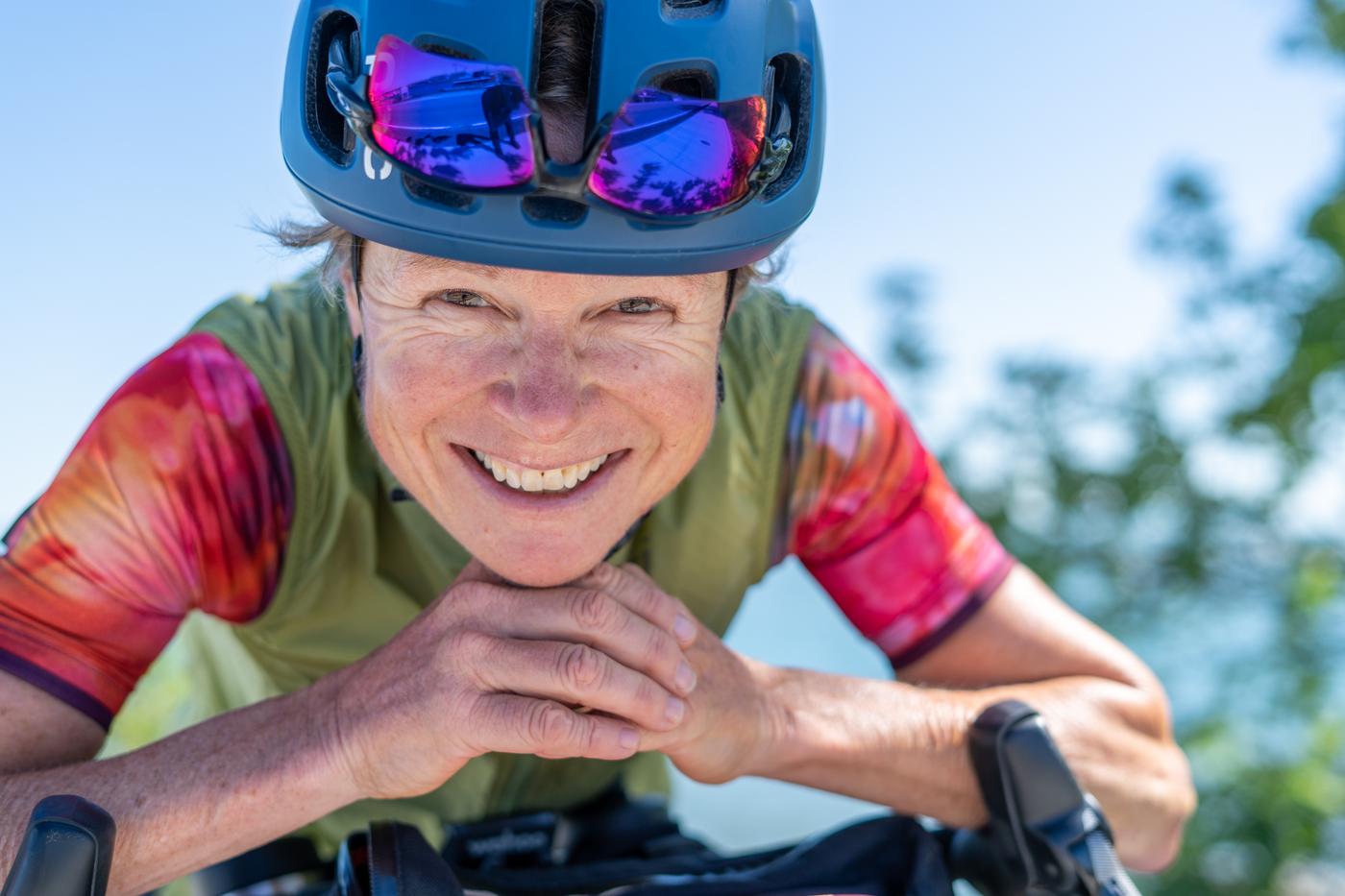 For Robin, it will always be about solo exploring. It’s how she learns — how she sees the world best. “I’ve always done things on my own. I mean, it could be said that I’m a control freak, but I think I just really like driving at my own pace. I don’t get lonely. Especially with the luxury now of being able to text people and send pictures and get responses.” She encourages others — especially women — to go out on solo adventures. They don’t have to be cross-country treks, but Robin says it’s good for women to be comfortable with their own company — solving problems and enjoying the views. “It’s a gift. It’s a huge privilege. I never want to lose sight of that.” 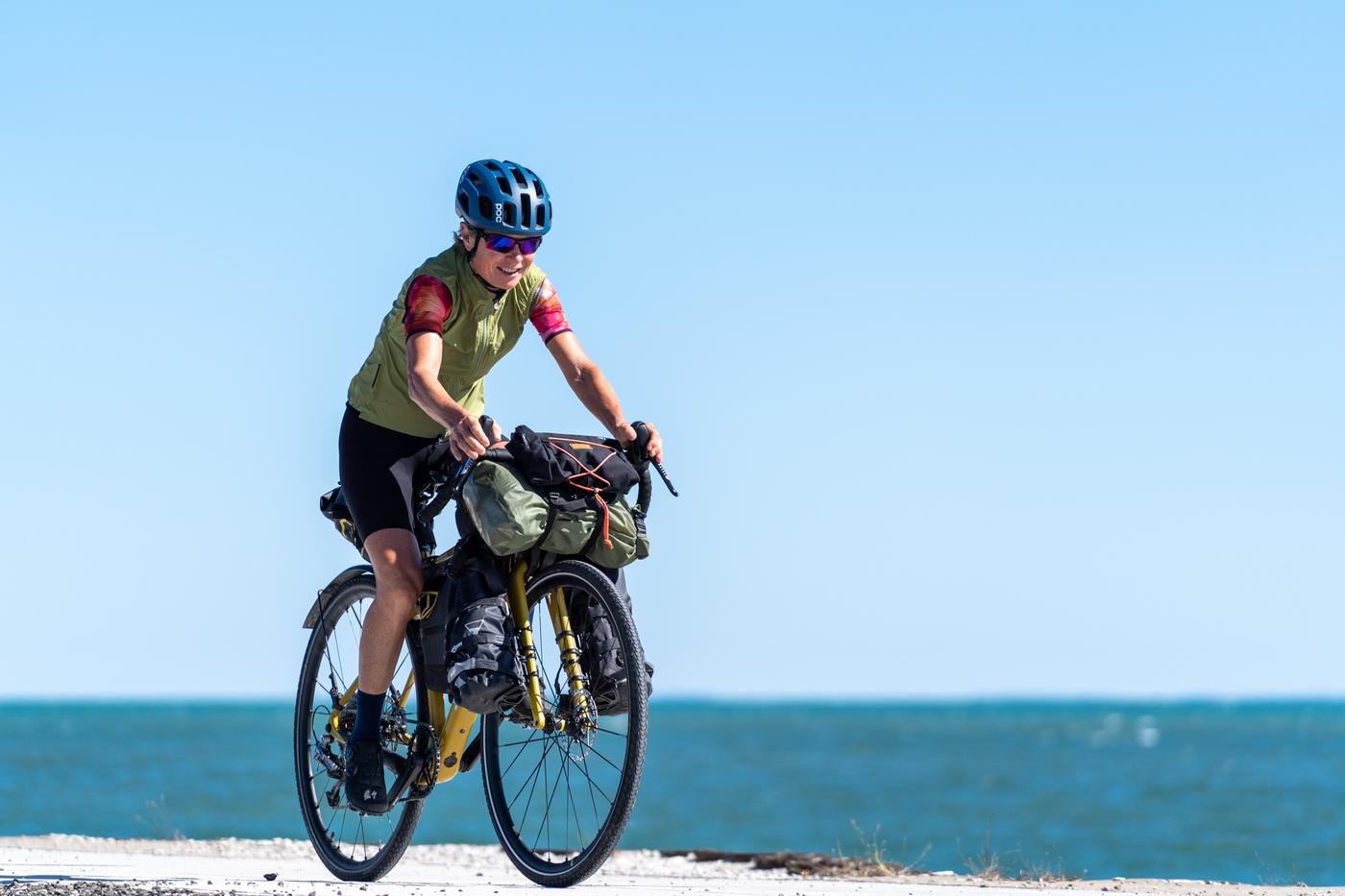 The accompanying photoset was recently shot by fellow cyclist and photographer Jody Wilson in Ontario. The photos document the gear Robin used during her trans-Canada, and are representative of what she’s packing for her next adventure across Newfoundland. Robin’s bike set-up and gear included Velocio clothing. She relied on the Concept Bib Shorts, Concept Radiator Jersey, Ultralight vest, Ultralight Jacket, Ultralight Rain Coat, arm sleeves, leg warmers, rain gloves, and rain cap to get through the variety of weather she encountered. She wore a POC helmet, and rode a Santa Cruz Stigmata gravel bike (Mavic All Road Wheel set with Continental Contact Plus tires). Robin used Apidura packs: the top tube, seat post, and frame bags. She also had Revelate top tube and feed bags, Restrap handlebar bag, Dom Gorilla Cages and Clips (for front forks), and Woho Dry Bags and straps. 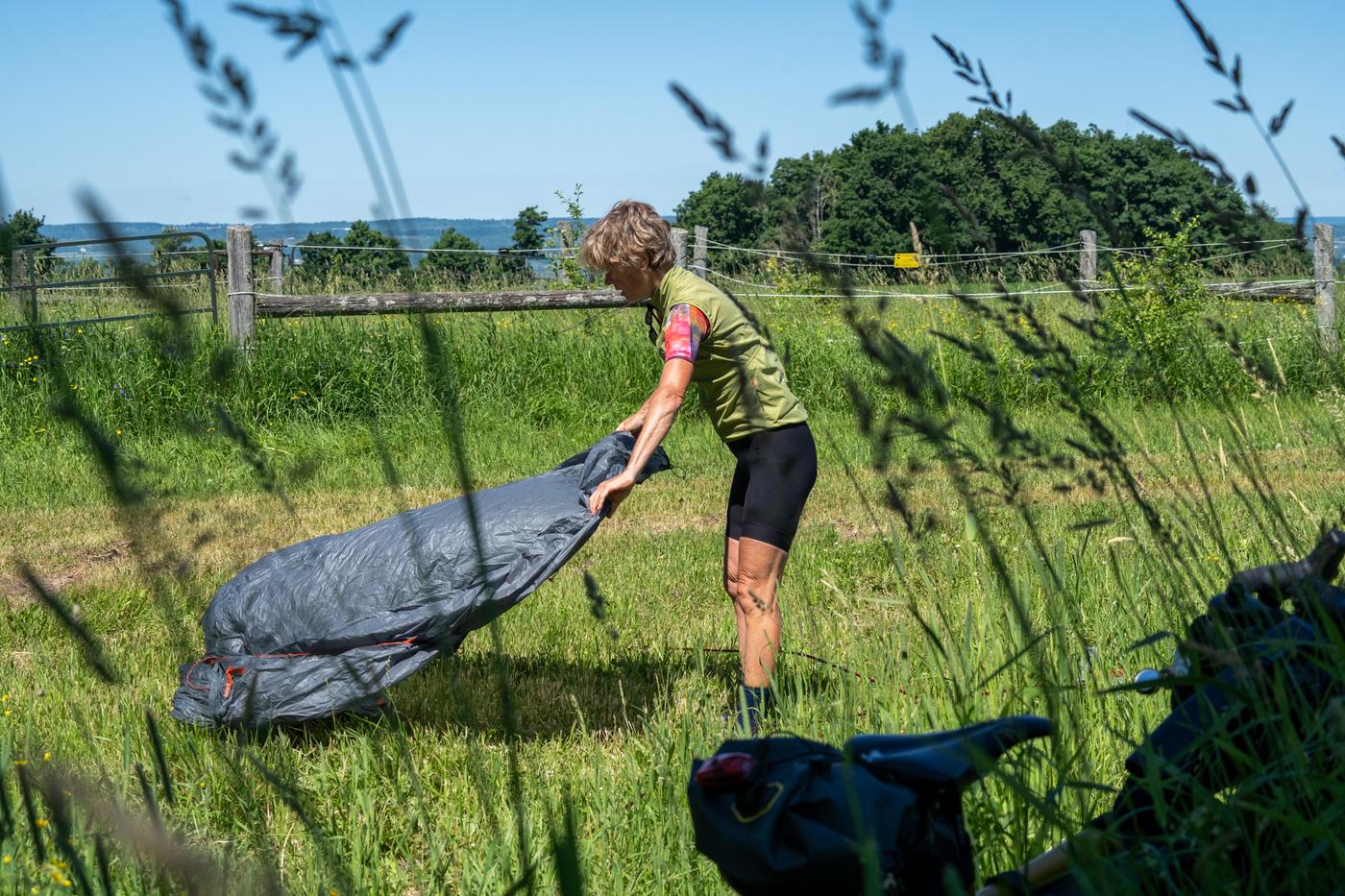 Other must-haves for Robin were her Wahoo Elemnt Roam bike computer, Go Pro Hero 8, and a Goal Zero power bank.

On July 11, Robin begins her next adventure: riding across Newfoundland. She’ll be posting regular updates along the way on her Instagram, so give her a follow and cheer her on!