The thing about living anywhere is even the most epic of riding can get old, repetitive. No matter how hard you try to mix it up, it’s easy to fall into a rut and in LA, that rut is usually on a steep and sandy grade. It just so happens that after two years of living here, I, like many humans, fell into a comfortable rhythm of riding the same trails over and over again. We try to mix it up, taking road trips to ride the neighboring trail systems, but driving is still quite the hassle. Then it happened, rather serendipitously, actually. Mike from Golden Saddle expressed an interest in scouting for the quickly approaching Swift Campout ride. He posted a photo on his Instagram of his Velo Orange Piolet, expressing he can’t wait to scout for the Campout. I chimed in that I wanted to join and we discussed the route. The thing is, GSC wants to mix it up each year for the Campout and the team has already hit a number of campsites within pedaling distance of the shop, but what about pushing it a bit more? 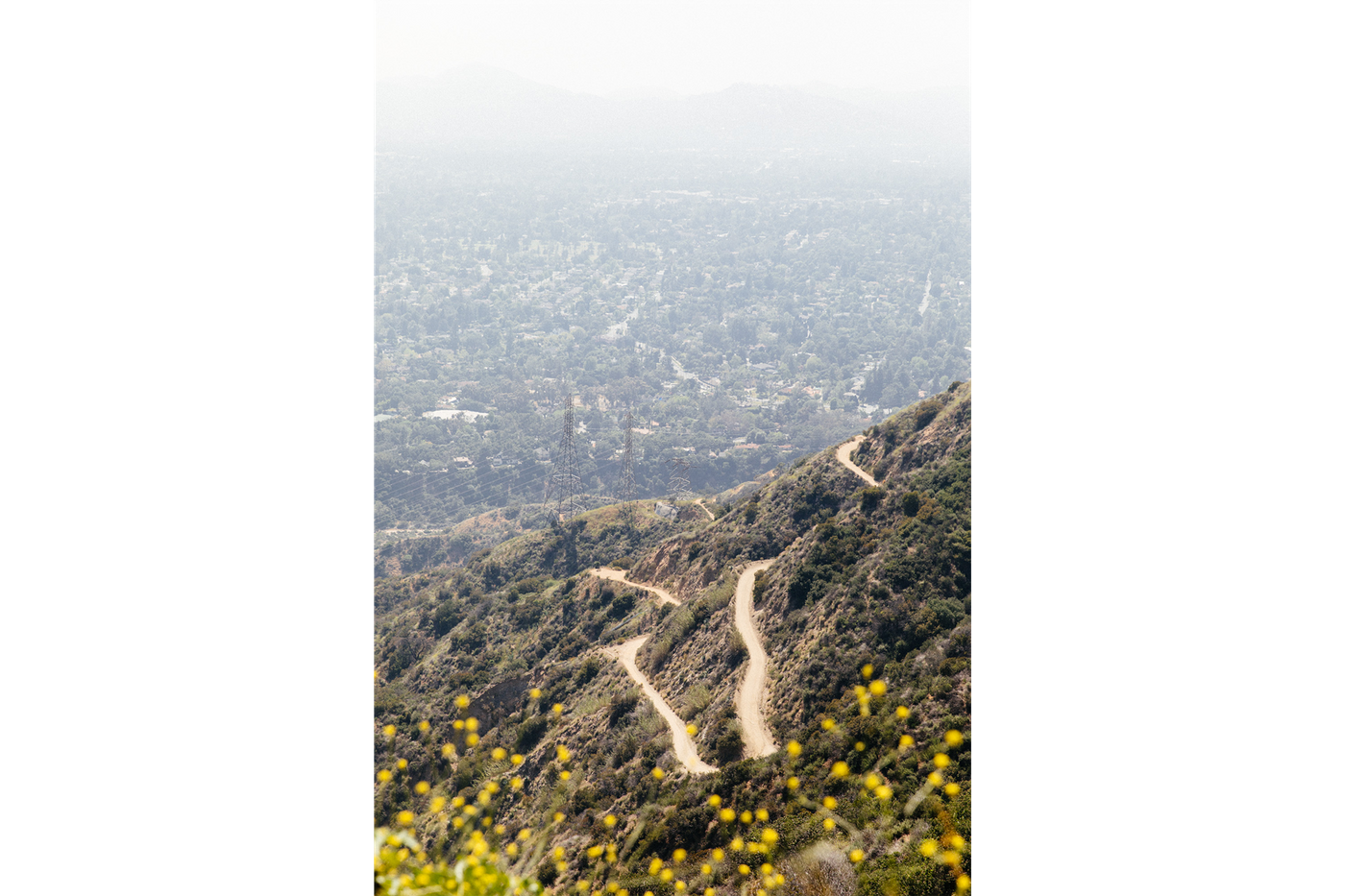 Los Angeles, contrary to popular opinion, is a city where you can exist without a car. I know it’s taboo to think such a thing, but the reality is, our Metro network is quite extensive and rapidly expanding to the outreaches of the county lines. You can take public transit all over this extensive sprawling plane of tarmac, to any number of hot spots. From the Hollywood sign to the Santa Monica Pier, the possibilities are endless, especially when you factor in the use of a bicycle. 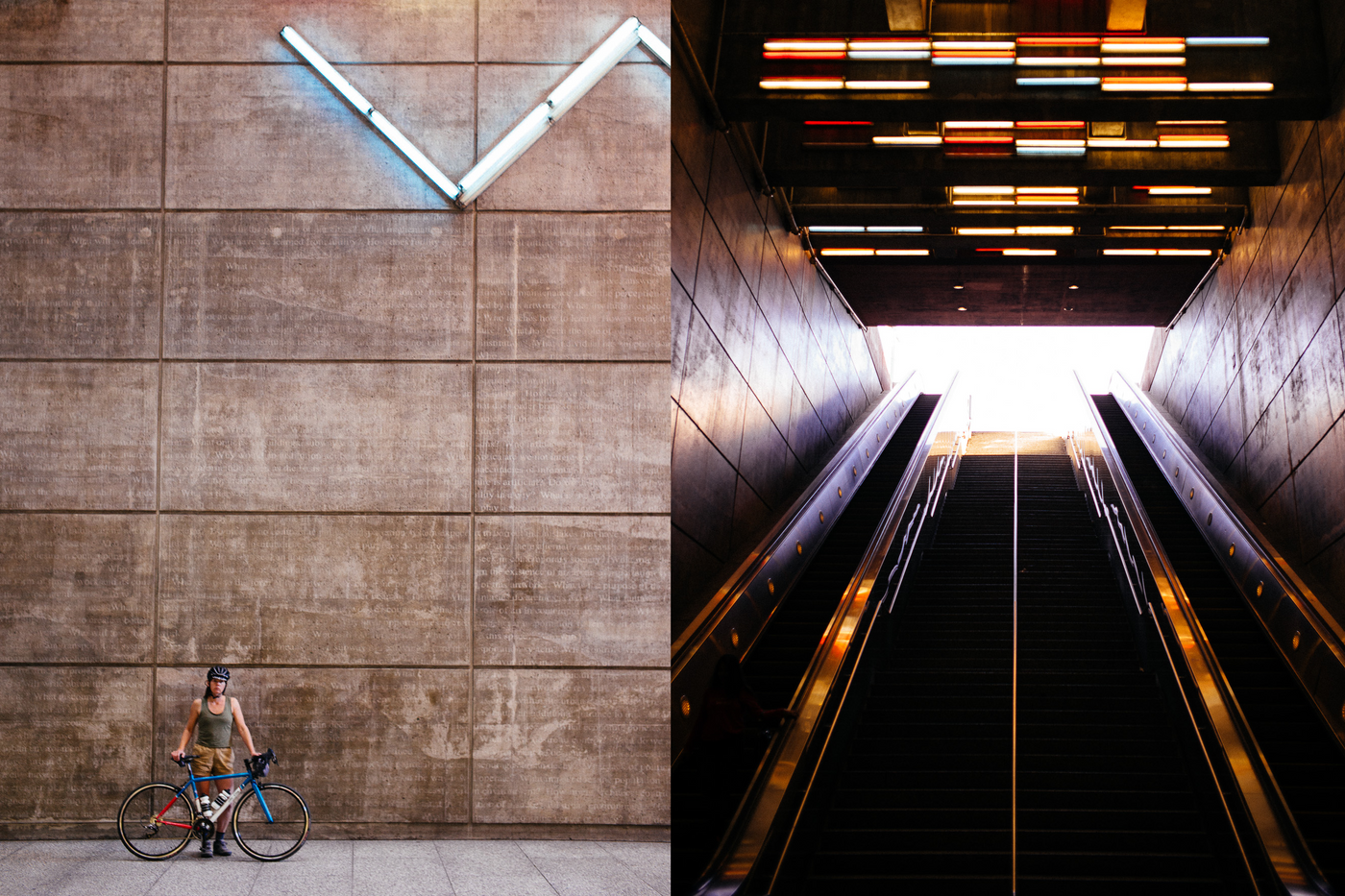 I have very limited experience with the Metro system here, having only used it to complete a few rides in the past where the notion of meandering through traffic during rush hour didn’t seem so enticing. What I was interested in, was taking the Gold Line out to the outer reaches of the Angeles National Forest, mainly to access Highway 39, Glendora Mountain Road, Glendora Ridge Road, and Mt. Baldy Road. We’ve ridden our bikes out to access those areas before, but putting your head down and pedaling through sprawl, past distracted Uber drivers is never fun and with the route Mike was planning, we’d need to conserve all the energy we could. Plus, May is bike month! What a rad way to ‘celebrate’ this occasion as seasoned cyclists. 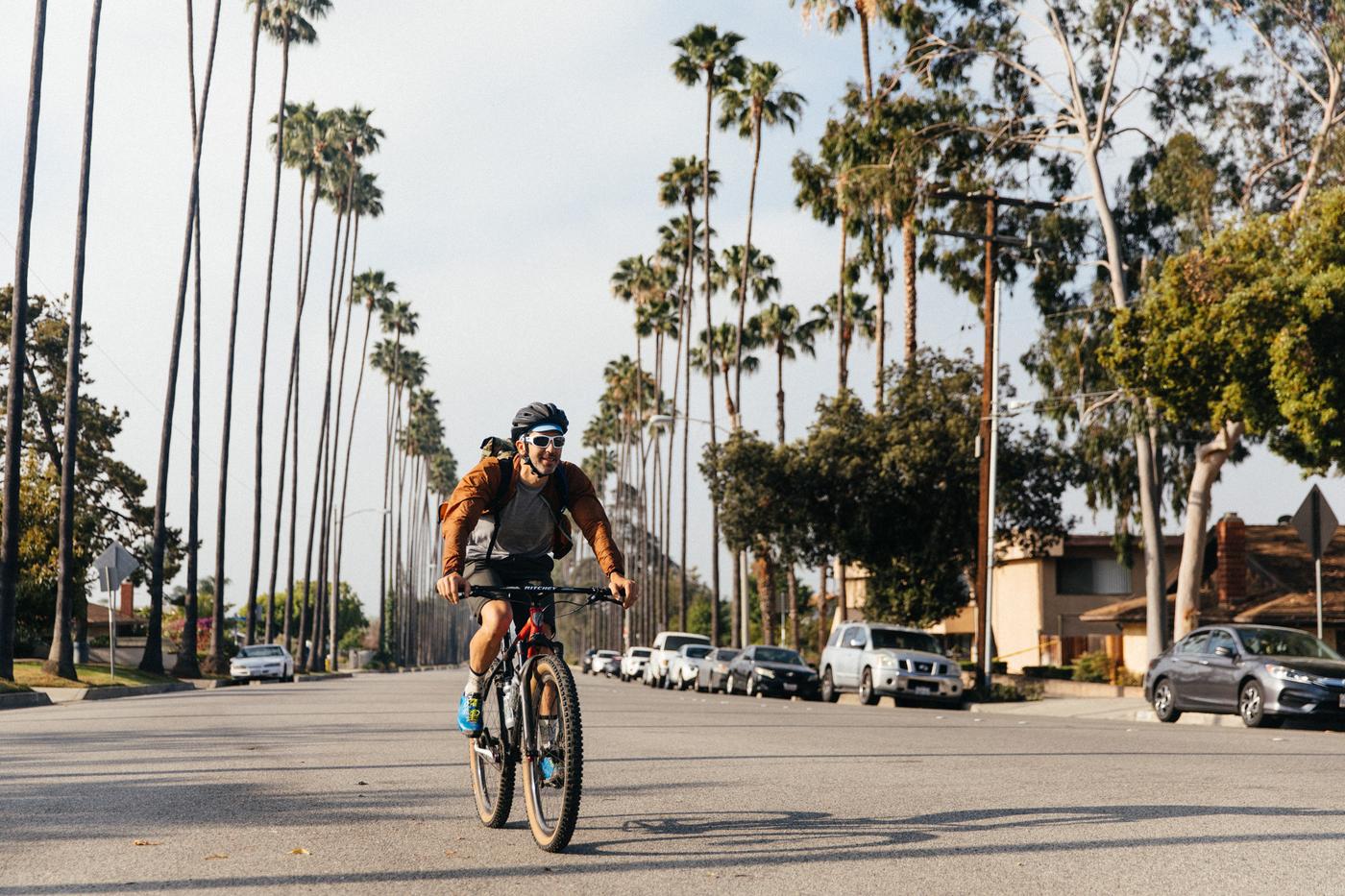 After a quick query, I found the closest station from my apartment, hopped on my bike at 7am, got the first train and was in Azusa within 45 minutes. Turns out, one of the riders who chimed in, expressing an interest in tagging along was on the same train. A quick pedal up to the Ranger Station at the base of the 39 and we were in the mountains. It took an hour door to door. One hour and the marine layer had barely lifted from the front range. I still was full from breakfast. One by one, our group assembled. Four of us met up and began to pedal our mountain bikes up one of the most beautiful highways in Los Angeles County.

This whole area of the Angeles National Forest is quite remarkable. A system of dams corrals the water coming off the steep faces and through the various canyons into control points, slowly turning the torrent into trickles. Spend enough time in Los Angeles, out in these mountains and you’ll surely hear about the Cogswell Dam. That was our initial destination. 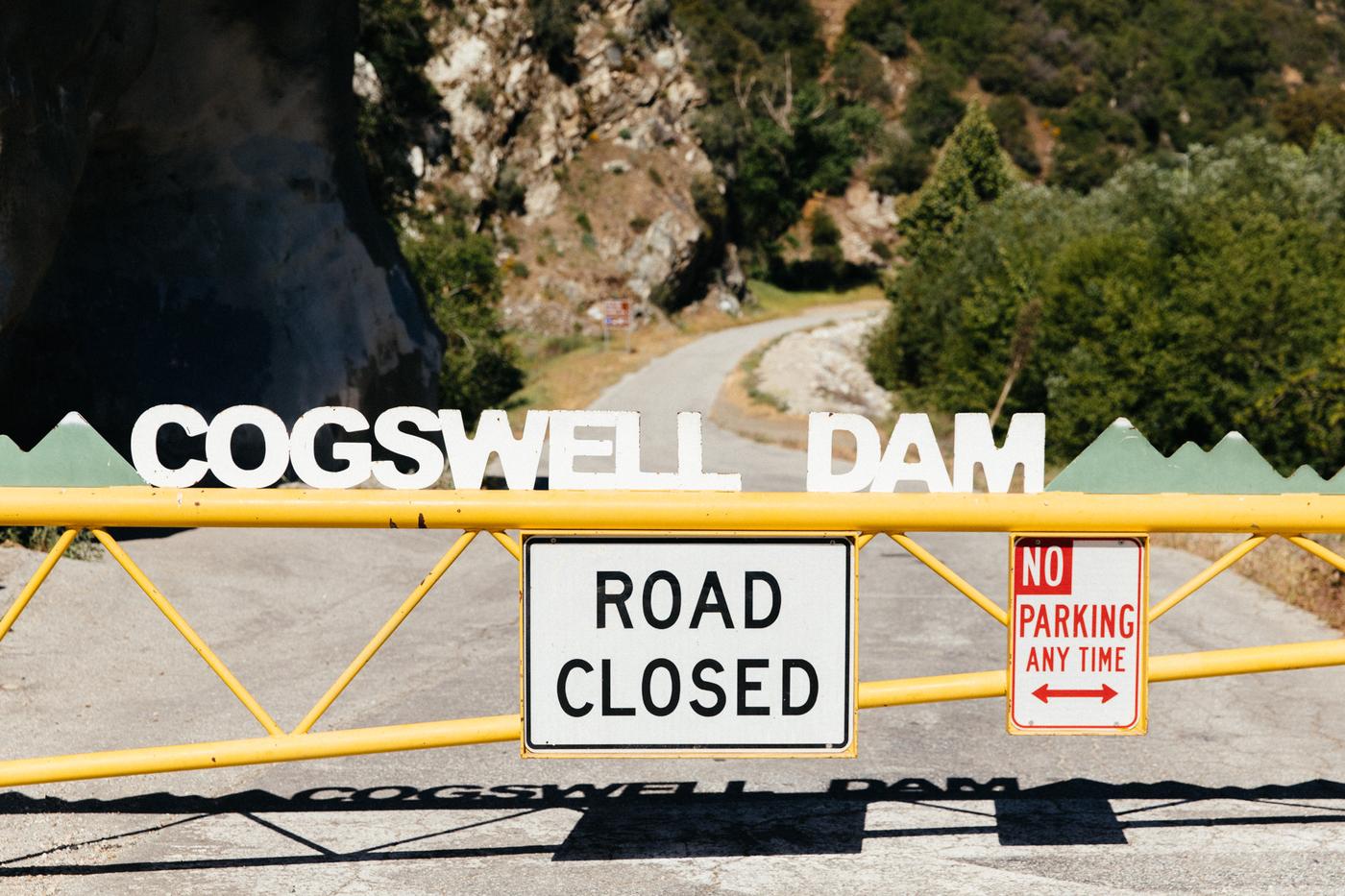 “Cogswell Dam is a rockfill dam on the West Fork of the San Gabriel River in Los Angeles. It is in the San Gabriel Mountains, northeast of Mount Wilson, and within the Angeles National Forest. It forms Cogswell Reservoir, which has a capacity of 8,969 acre-feet. It serves mainly for flood control in conjunction with San Gabriel Dam and Morris Dam downstream. San Gabriel Dam lies 13 miles downstream.” – Wikipedia 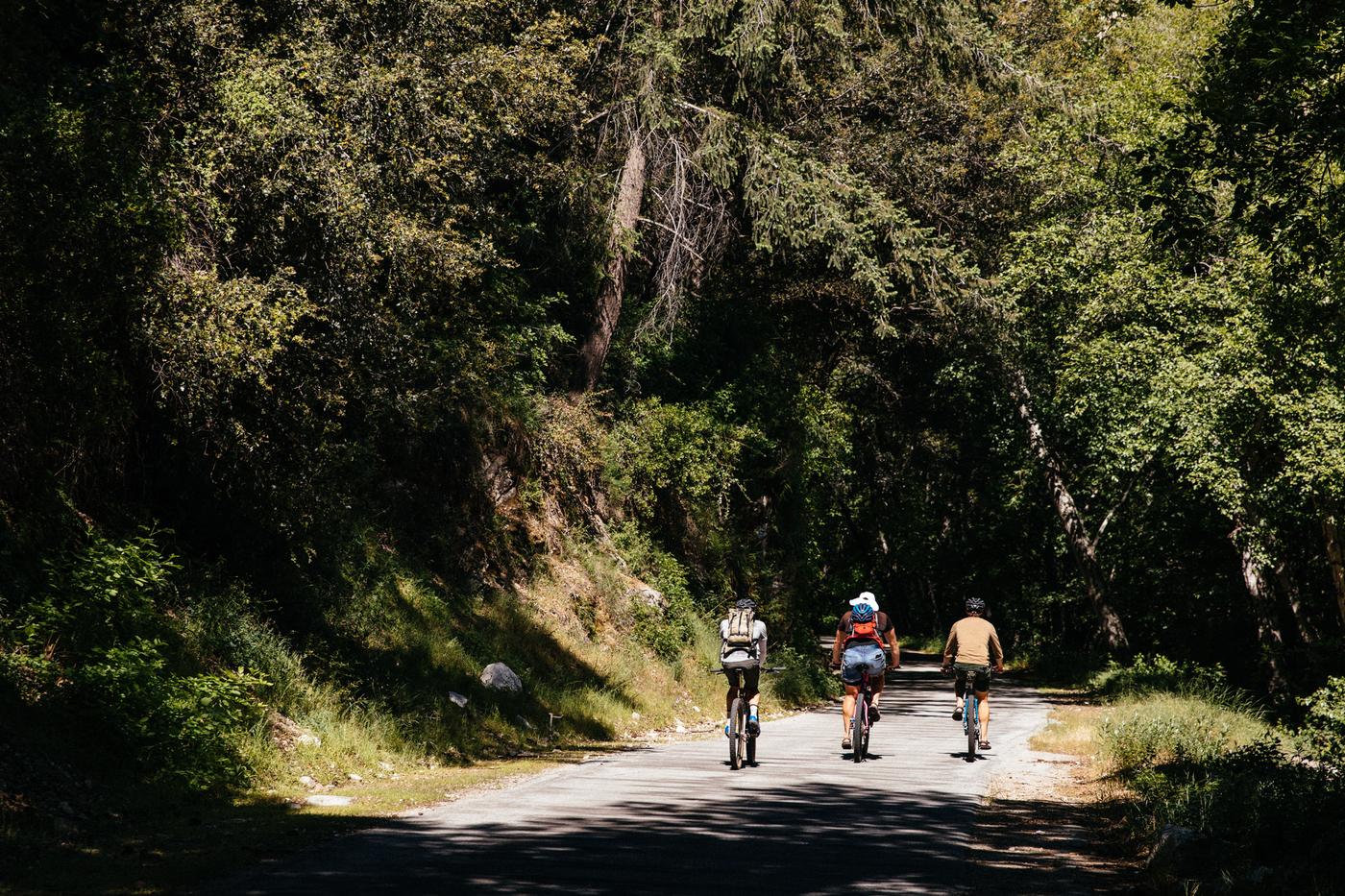 Here’s where the story gets interesting. Every dam needs a network of access roads and typically, these access roads are closed to the public. Not here. Well, not entirely. There’s a beautiful, 8-mile road that follows the trickling stream that comes off the Cogswell Reservoir. This white noise of this stream, combined with a canyon menagerie, produces the most fantastic sounds to accompany this easy, slightly uphill grade. Now, water is always an issue on these rides in the San Gabriel mountains. There isn’t an infrastructure to support the rather small percentage of people – when compared to LA County’s 10 million – who use these trails for recreation. As it turns out, the water is often times at the base of the mountains and at the tops, at least when it comes to Mount Wilson, the mountain we’ll be giving a hug on this ride. 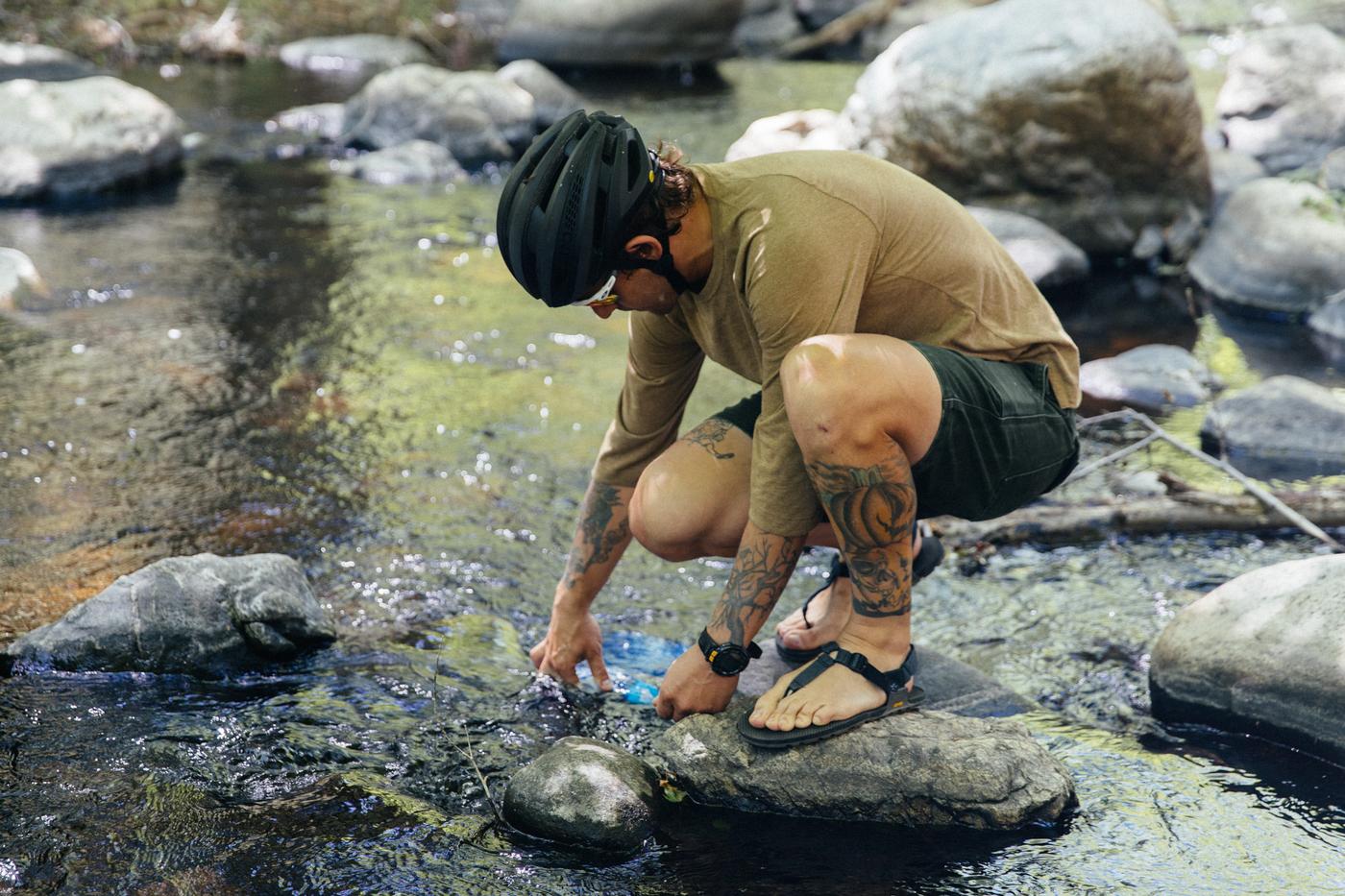 There is, however, a stream that lines this path to the Cogswell Dam and that stream is where we filtered around 60oz of water, completely filling our bottles, bladders, and selves before we made the hot trek up the aptly-named Devils Canyon Truck Trail. I love the mini Sawyer Filter for trips like this. It’s tiny, weighs 2oz and will fill up a large bicycle bottle in less than 30 seconds. Not bad. I usually keep mine in my pack all the time. 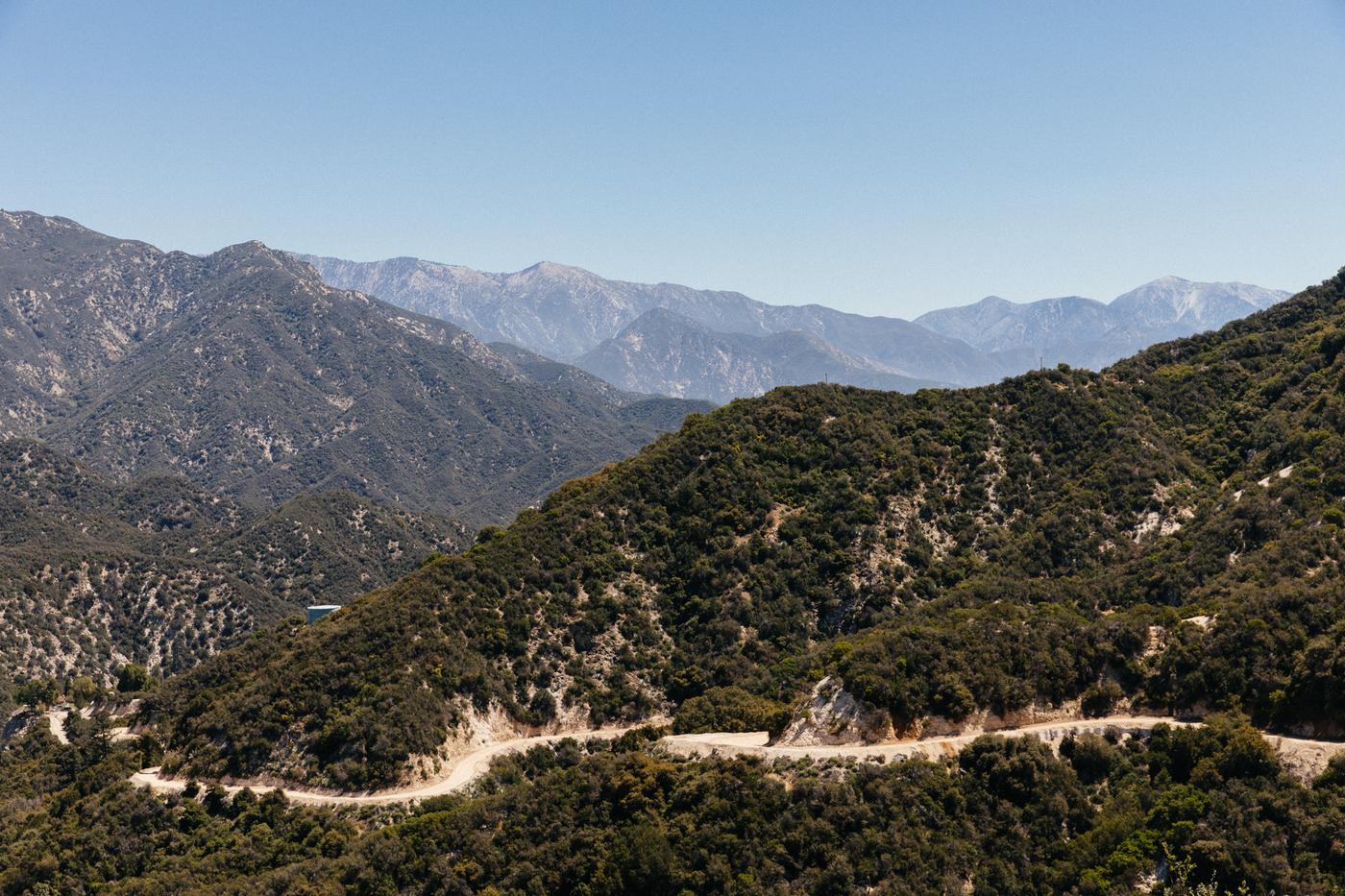 The traverse along San Gabriel River abruptly climbs away from the reservoir to West Fork Red Box Road. There are a few turns you’ll need to be mindful of if you’re to attempt this ride. The main one being the turn that takes you up to the Mount Wilson Rim Trail. You can export my GPX file at the Strava link below to be extra safe. A few wrong turns here can make a hard ride even harder. Play it safe. 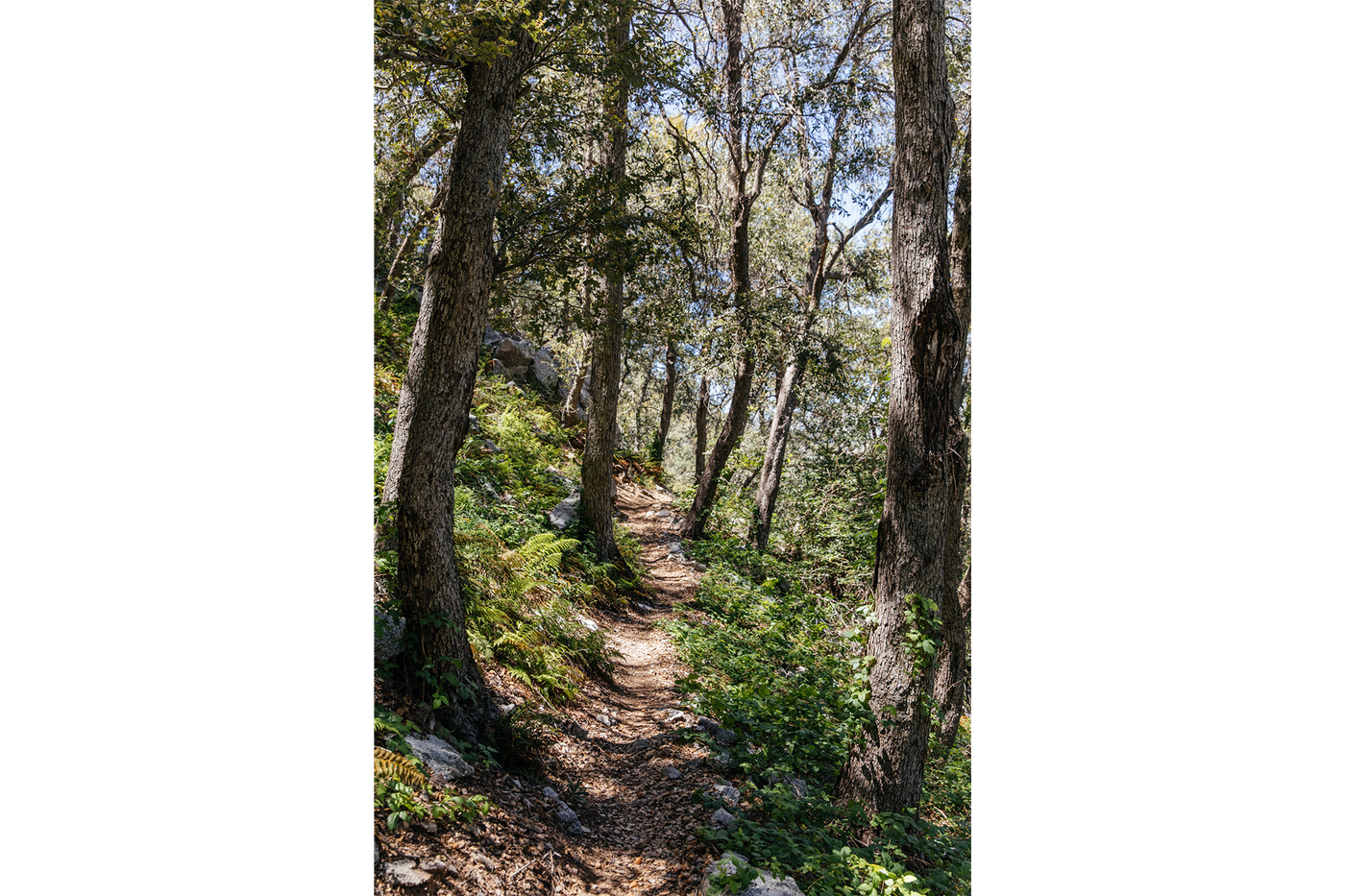 We knew what we were getting ourselves into. The Rim Trail, like many of the trails up here, are hiking trails, best traveled by bicycle when gravity is your ally, not your foe. It’s times like this when having a light, easy to maneuver bike comes in handy. With a 12″ wide off-camber, loose trail, with lots of exposure, and lined with poison oak comes into the picture, foot placement, just like bike placement is the difference between finishing the ride unscathed and limping home. 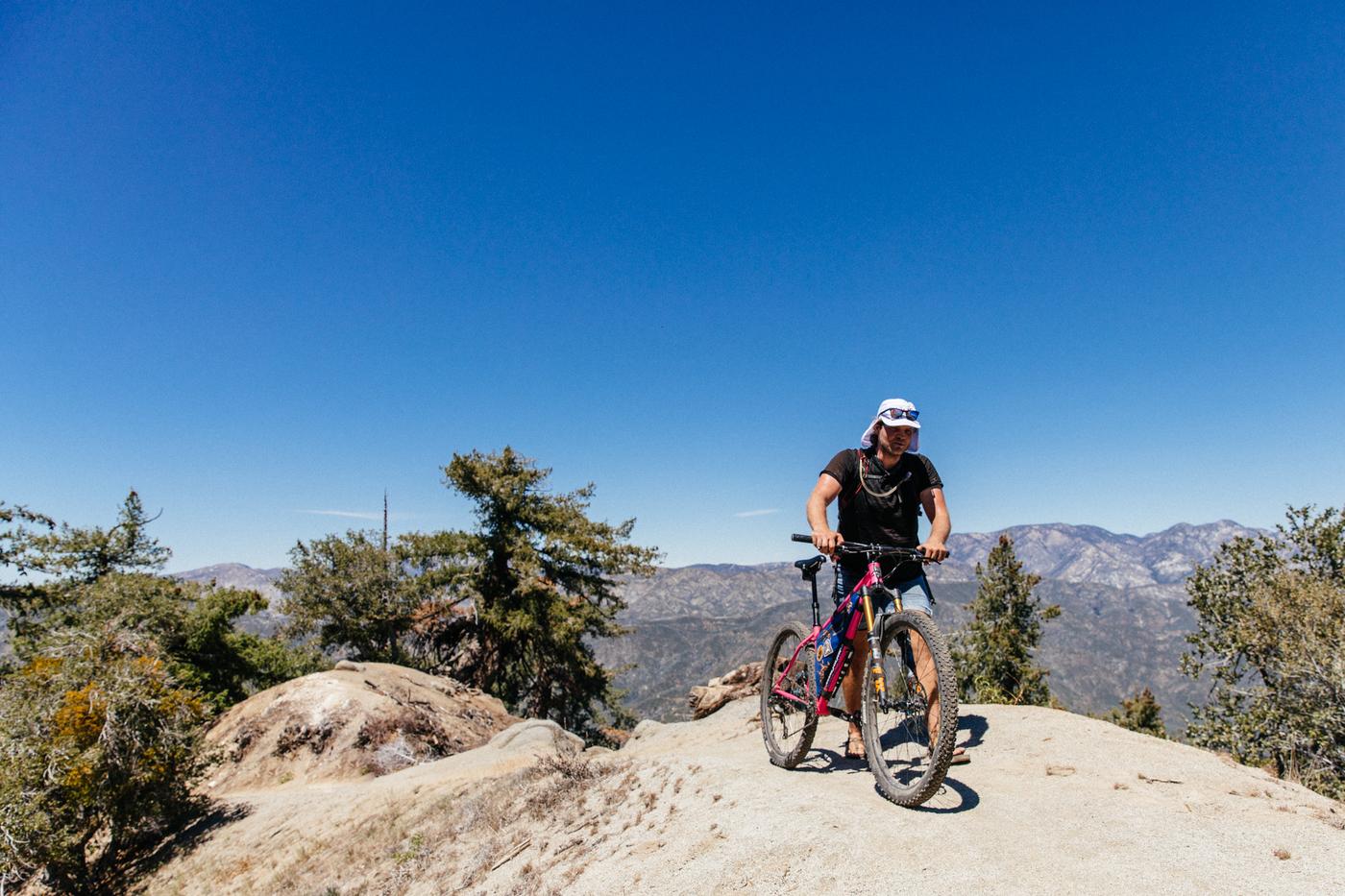 3.5 miles later and we were at the peak of Mount Wilson. Where a spigot spewing ice cold water awaits. We gorged ourselves like fish, washed the dry salt and sunblock from our faces and consumed the rest of our pack snacks. Dried pineapple, gummies, sandwiches. From here, there are many options to descend but we chose Mount Wilson Toll Road. 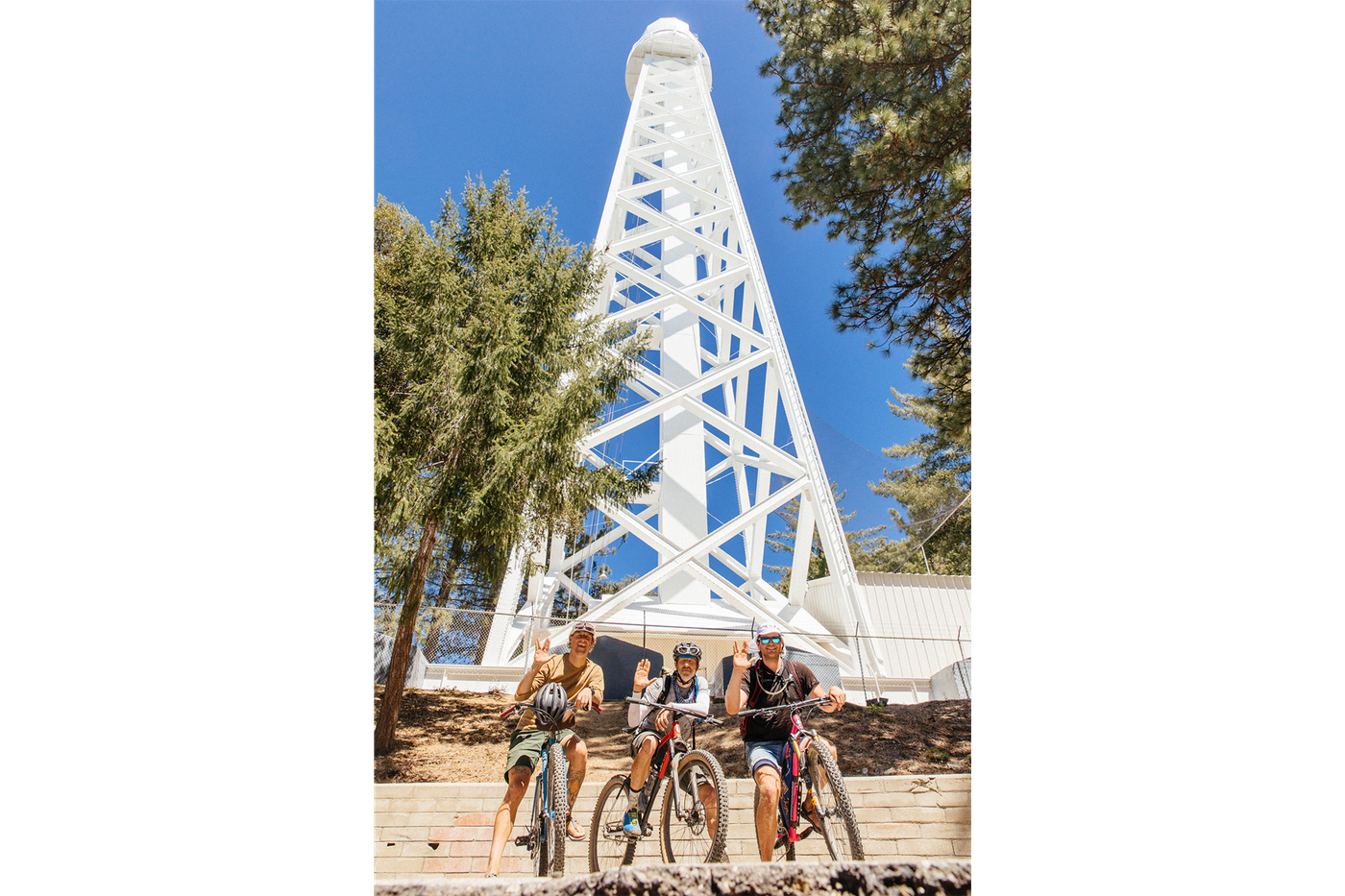 A bit of history here; Mount Wilson has an observatory atop its peak. George Ellery Hale (1868-1938) founded the Observatory in 1904 and directed it until his retirement in 1923. Atop this mountain is a Monastery, the dormitory for astronomers and scientists. Along with an entire infrastructure to support full-time habitation, the research labs, and a giant telescope, there’s a cafe that serves up grilled cheese sandwiches on the weekends. The Toll Road was built to haul the telescope’s optic glass up to the top by rail car and is still in use today by the Forest Service. It’s a neat bit of history that makes the story behind Mount Wilson a bit more involved than just being another mountaintop. The Toll Road is a ripper going down and a behemoth going up. If you’d like to attempt this descent, I recommend going up Mount Lowe Railway, then climbing up to the Toll Road from Eaton Saddle. It’ll be easier by comparison. For our group of four hungry, sunburnt, and dusty riders, we relished the ‘grip it and rip it’ dirt descent back down to the palm tree-lined streets of civilization. Mike took the train home, while the others, myself included pedaled back along the afternoon traffic. 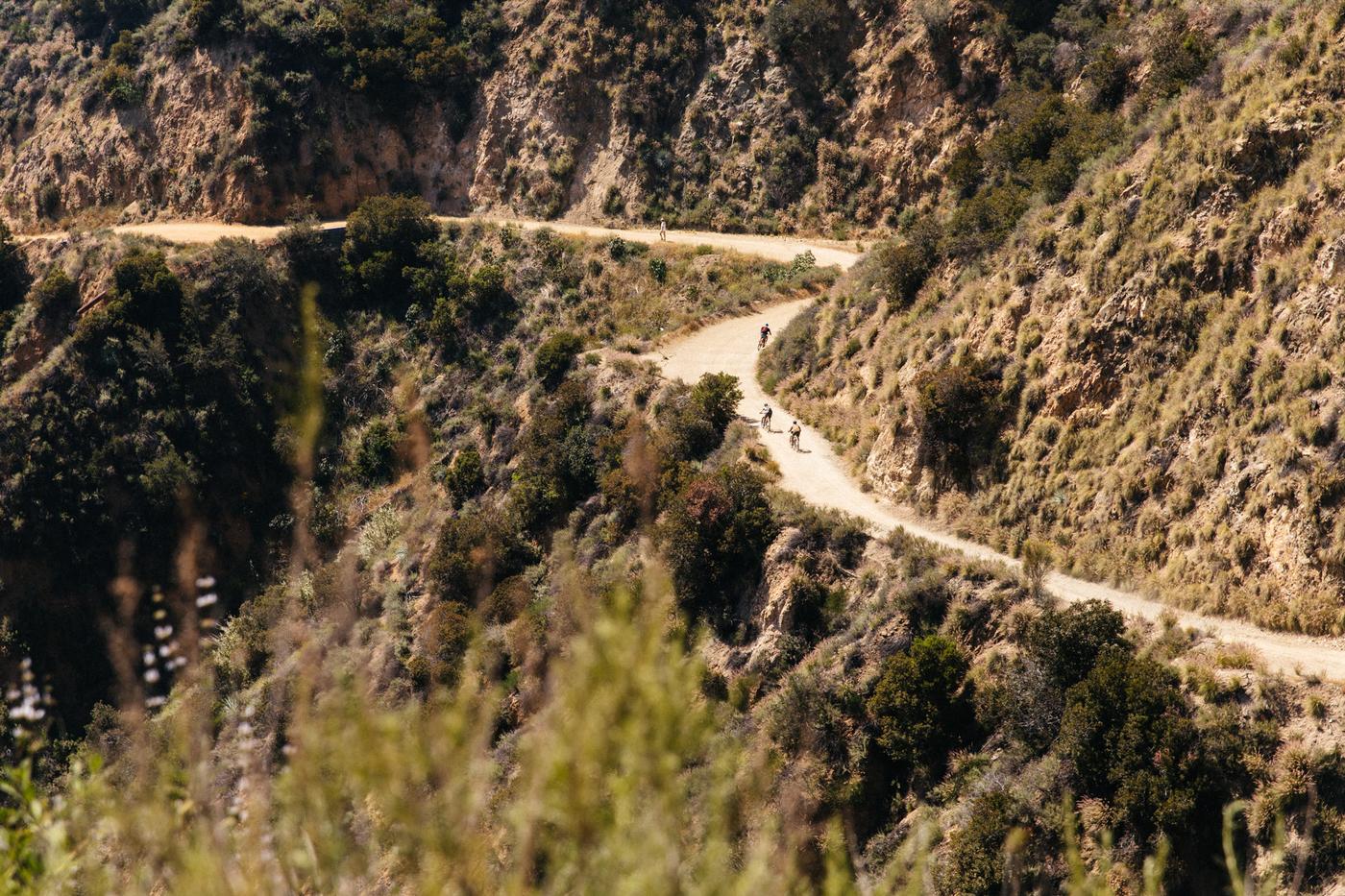 Our ride totaled around 55 miles, and for some reason my elevation is saying 9,000′, which I’m assuming should be more like 6,000′. You can see the data at my Strava.