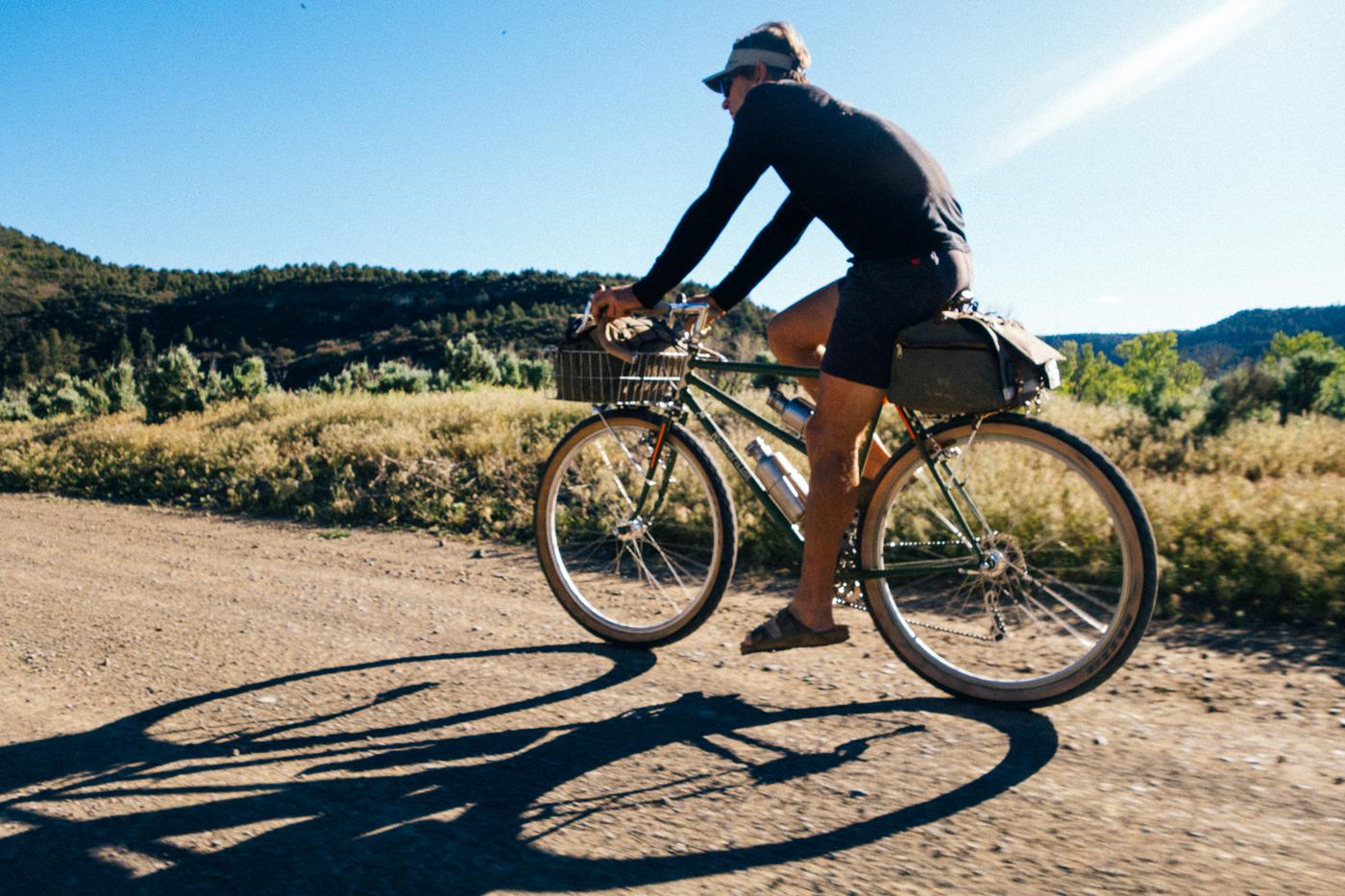 When I agreed to donate my body and mind to a documentary documenting the “Y’s” of why people other than dentists are into this sorta thing, I didn’t really think much about if I could or would do a race like the Dirty Costanza, but more of how I just wanted to be in a movie. Then I suppose much like my overworked major Hollywood thespian colleagues, the reality of how big a task I just took on sunk in. There was no way I was going to be able to simulate a 200-mile day. 50 miles a day sounds reasonable to me… so multiplying those numbers in my 14k gold Apple Watch I came up with how long it would take to ride 200 miles at a typical pace. 4 days. Good thing I have that calculator watch. 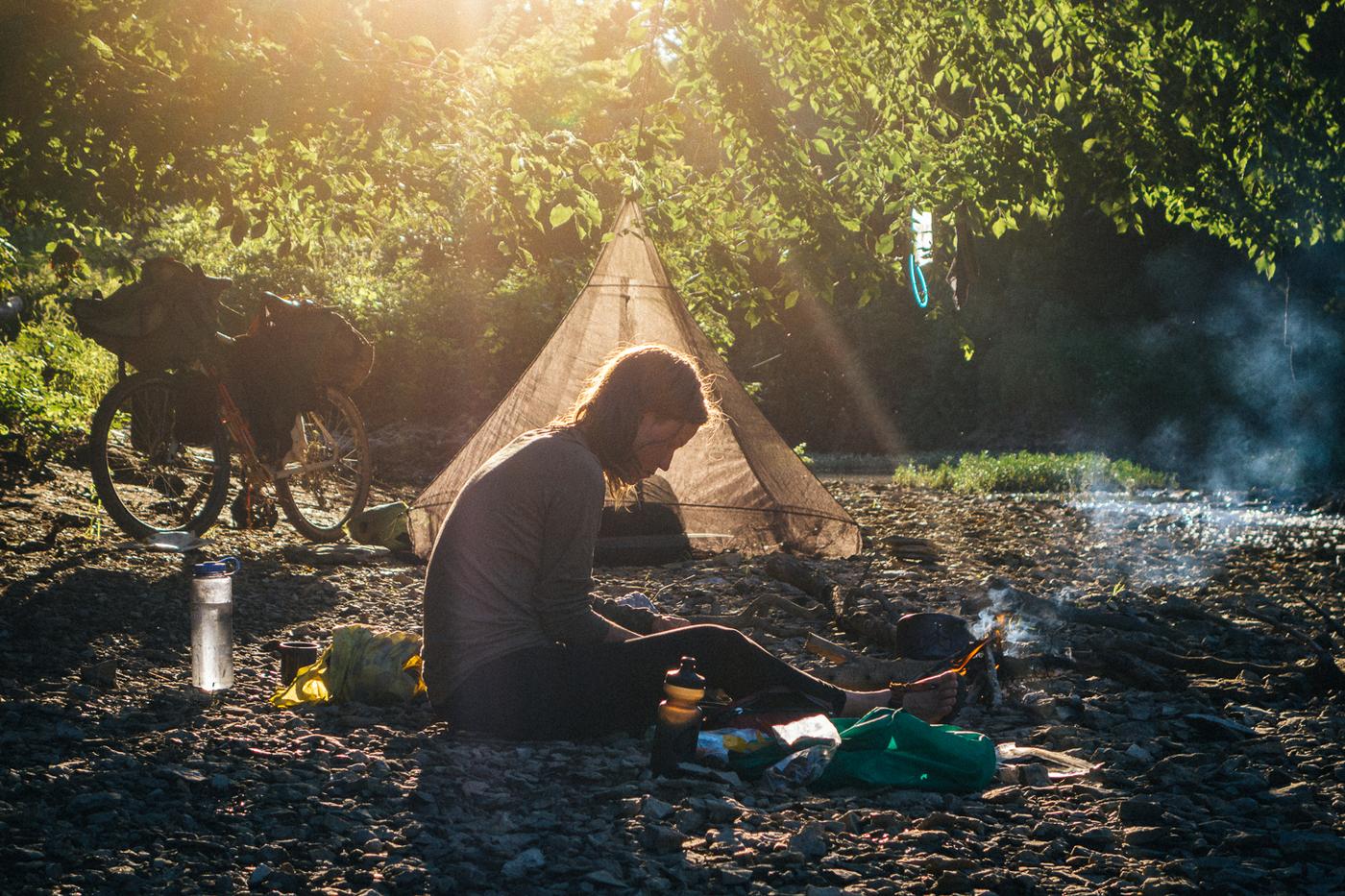 Then it dawned on me: I’ll ride from Tucson to Kansas! My good friend and fellow Specialized attaché, Sarah Swallow, was also going to “race” filthy Kanza Costanza, and decided that she would join me from Durango for the last 2 stretches over the hills to the plains. Well, more like 13k peaks. Sarah makes the absolute most thought out and organized off road routes, so Durango-Emporia would be a show stopping showcase or backcountry routing. Great, I would likely be going a little dental after riding 600 miles solo in the desert, and what better company than a good friend with the same short-term goal. I was excited for this 1800 mile journey through the southwest, over the rockies, and into the vast grassy expanses of the great plains. limited relaxation, and maximum éSPORT. 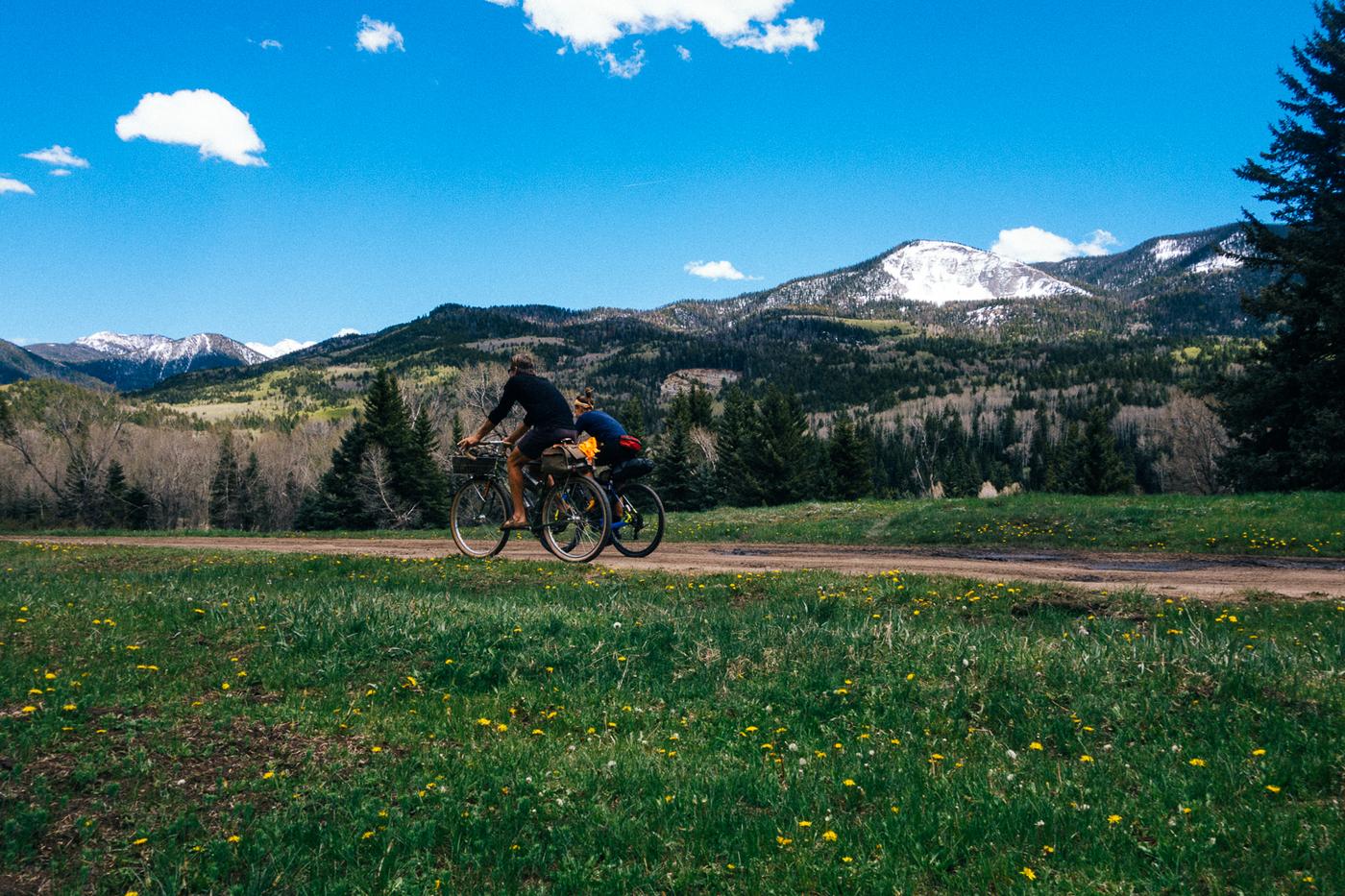 Like a badass hobbit leaving the Shire, I kissed my partner ol’ Namz goodbye, and pedaled off into the sunset like a badass. Then I rented a car and drove it to Los Cruces New Mexico. 10 miles in and I already hit the fast forward button. This was going great! Ok, so drop off the Ford Flex, hit up the Natural Grocers, and it’s bike wheels down on Cass’s New Mexico Off-Road Runner route meandering deep into the turquoise heart of “the land of enchantment”.

Wow, what an amazing route. Wish I had more photos of it, but as it went, my DSLR decided it was more into relaxation than performance. Can’t blame it. Anyway, the thing was dead. Very relaxed. If you wanna know what it looks like check out Cass’s shots. Ended up taking a few iPhone photos, but what professional instagramer takes photos on an iPhone??? I quickly lost interest in the photographic element of my ride. I was really becoming an athlete now! 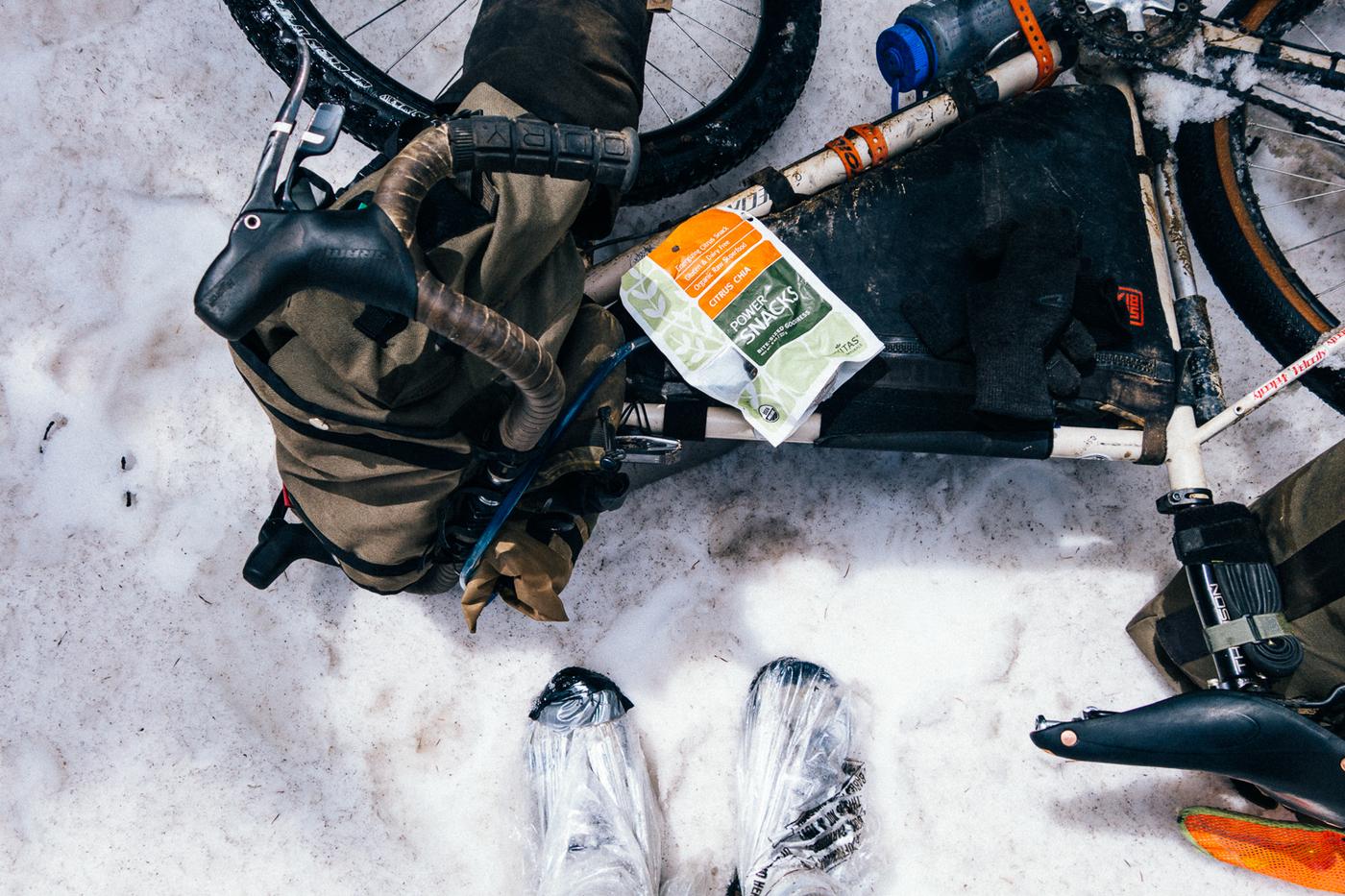 Before meeting Namz, solo touring was typical for me. It was never by choice really, well not consciously. I just generally ended up alone out there as not many folks have as flexible a schedule as a seasonal fisherman/fitness model. It’s generally great during the day; you just get up and do your thing, riding along at your own pace listening to audiobooks about New England maritime history. When night comes, the loneliness creeps in. Lighting a fire for company helps, but still, yer eating lukewarm nettles and quinoa conversing with the air about New England maritime history. You get used to it, and it’s fine, but I’m just saying it took some mental re-adjustment. Nevertheless, before long I slipped into the ride eat sleep routine of the road and was as free as I look at all those staged photos people take of me.

8-10 days later I arrived in Durango for a prolonged layover mountain bike vacation. Here I met up with Sarah, and the last minute addition to our journey, Lorde Adam. A knighted Lorde from Britain via Texas via Durango. L. Adam is always a welcomed addition to any trip, as we have known each other since our road racing and sperm donating (Cat 3 road racing doesn’t pay so well) careers in Austin. I think I touched on this in a previous article. A late snowstorm dusted the mountains a day before our departure, but spirits were high, so off we pedaled towards Pagosa under a bright blue southwest Colorado spring sky. That rhymed if you wanna say it again. The dirt was perfect and the days were long, but as the 11,000 ft Elwood pass loomed, snow-capped in the distance, the mood sobered up just a little. Would we be able to make it over without post-holing ourselves into a cannibal survival scenario? Gahhh, so dental. The other bail out would be to ride the pavement over Wolf Creek pass. No thanks. We’ll post-hole and maybe call a helicopter if we get in too much trouble. Nothing I haven’t done before. So up and up into the snow we went in our sandals and shorts, never looking back other than to take the award winning civilian pocket camera photos you see here. Some say walking your bike is just another riding position, some say it’s a great way to ruin a good hike. Either way, uh-walkin’ we went. The snow was freezing like a funky ice cream sandwich between the soul of our sandals and feet. Sarah had shoes on, but wasn’t doing much better. Before long L. Adam and I took our sandals off in favor of heavy wool socks. Ended up working surprisingly well, as the texture of the wool acted like skins on backcountry skis. Really good traction, and matched with our cute size 14 feet, we were able to shimmy right up the mountain and get to the forest service cabin right before nightfall. Oooooh, that felt good. I’ll never forget the site of that cabin and all it’s stacked firewood standing like a vestige of relaxation amidst the stark wilderness at 11,000 ft. Forgot to mention we had researched and rented this cabin ahead of time. What a great idea! 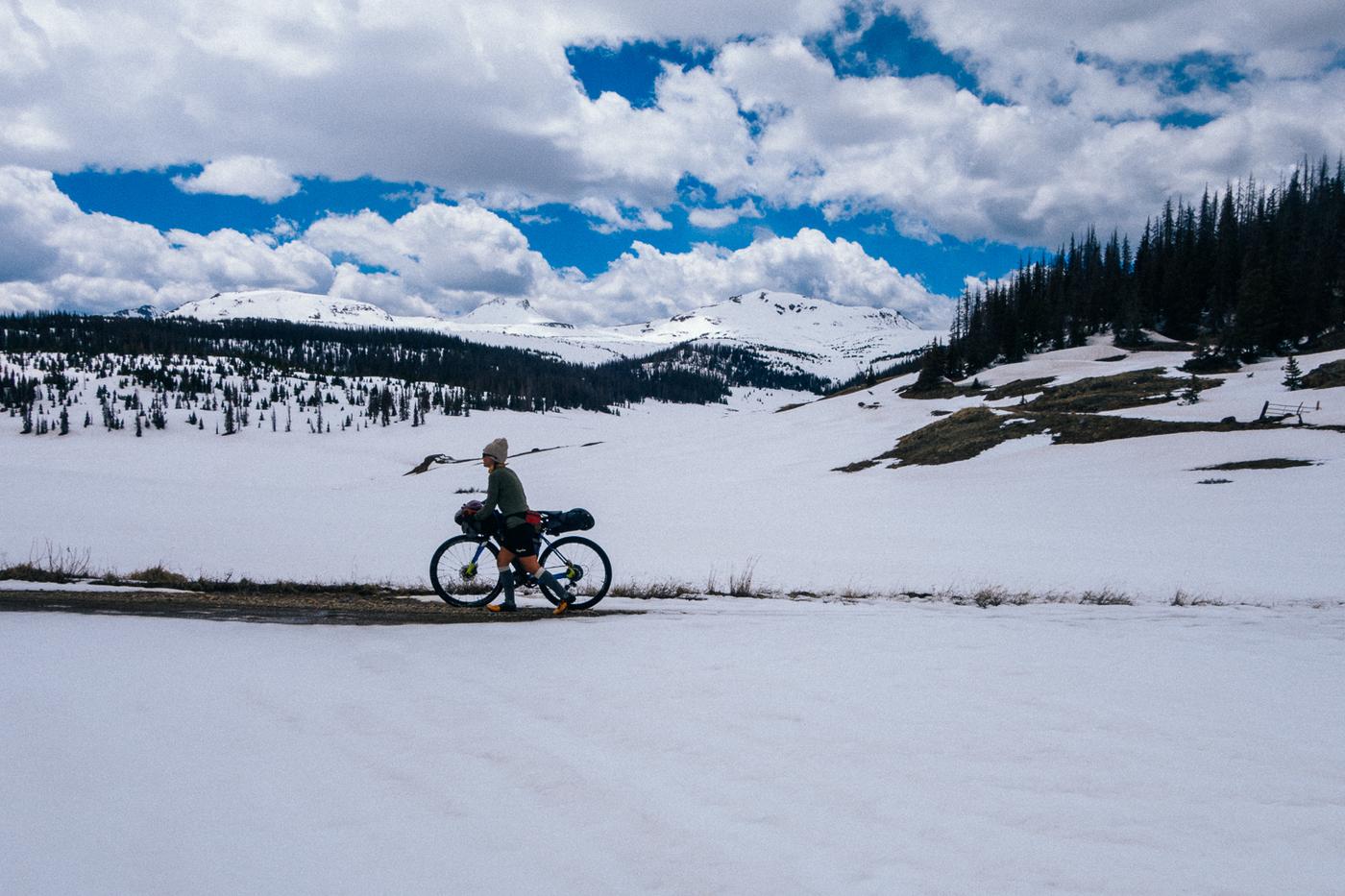 After a heavy sleep, we awoke for some light stretching and critter peeping and you guessed it, more bike pushing in the snow. This time downhill. Turns out, it’s just as asinine as going up. It was over before the end of the next day though, and we were then in a wooded valley for much of the next 24 hrs. The temps were warm once more, and the snow was behind us, kinda. we pedaled all day and the next before hitting the sand dunes at the foot of the Sangre De Cristos at sunset. What a sight. last time I was at these sand dunes was when I hitched a ride from Durango to Colorado Springs to see a ManOwaR show in 1999. Back then I wouldn’t have imagined I’d return 18 years later wearing sandals and on an IV drip of THC. The dunes and the steep mountains that held them in their jagged bosom were even more beautiful than I had remembered. Must have been the THC. Sarah pointed to a tiny notch in the distance. “That’s our pass” she muttered in a haze of exhaustion. We collectively put our heads down and pushed through the deep sand into the night. Not supposed to camp off-site there, so let’s just say we didn’t. 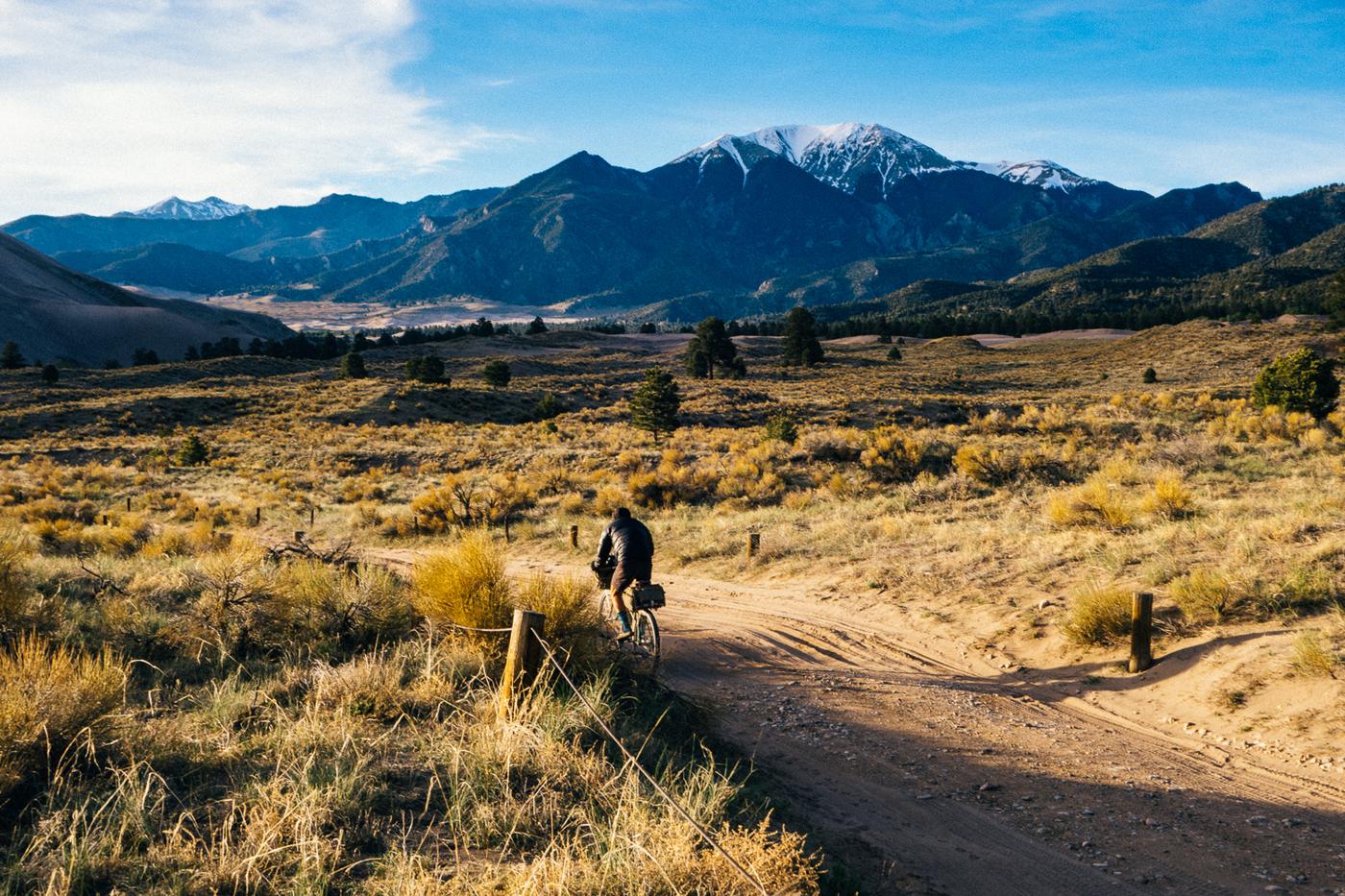 The following day we climbed over the Wet Mountains, rugged and majestic, then descended down into one of our last remaining valleys before the vastness of the eastern plains revealed itself. We were well settled into our pace through the mountains, and while the flatness of the terrain means easier riding, we were mentally dreading it. It was still a long stretch to Emporia, but we had training to do! L. Adam bid us a farewell in Pueblo, and together Sarah and I continued into springtime tornado alley. Fun! 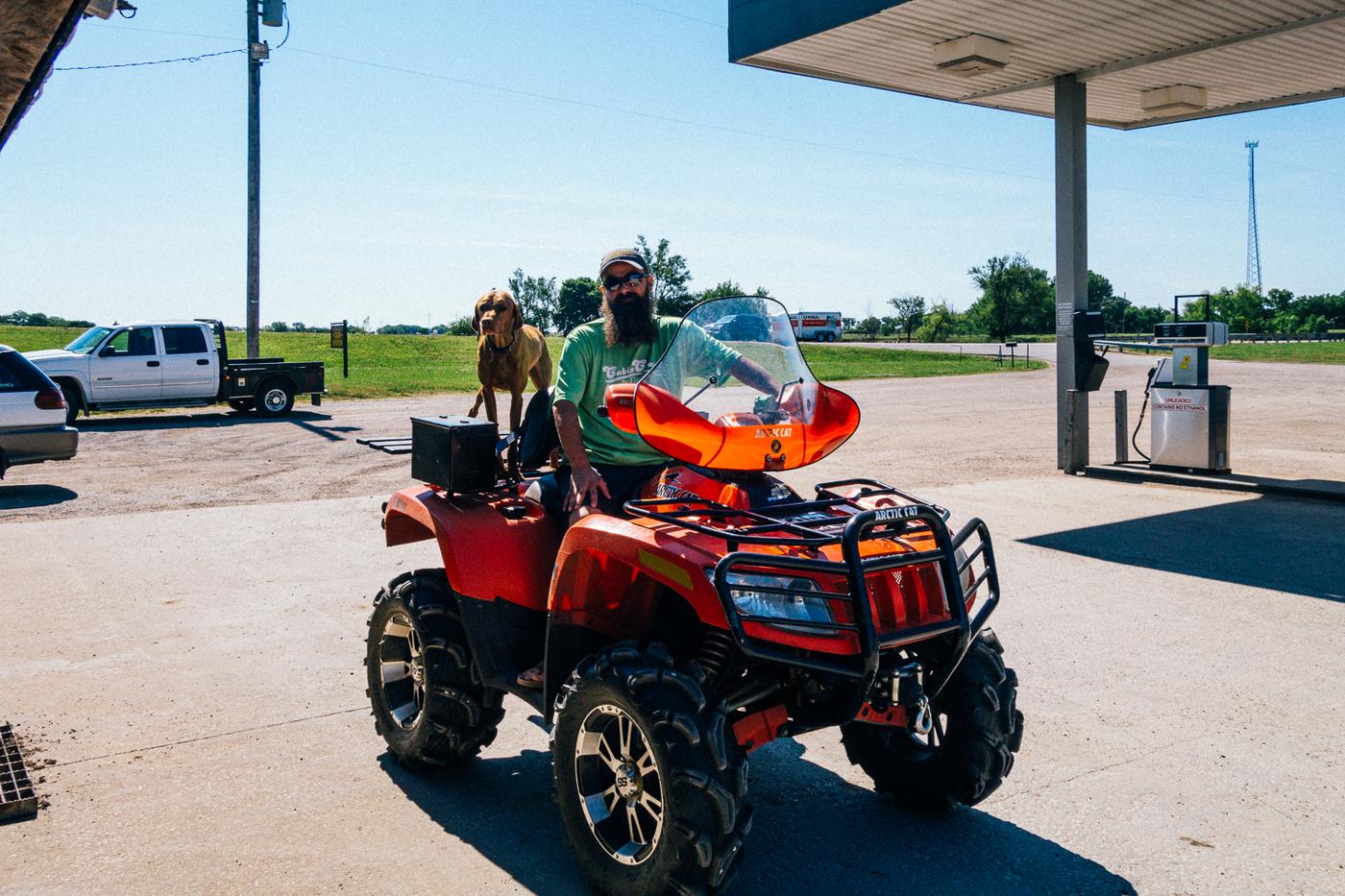 I had ridden this desolate stretch across Kansas on an xtracycle back in 2003 on a failed XC attempt. I always said that if I attempted a cross-country journey again, I would skip over Kansas entirely, but here I was. Luckily the Sarah Swallow way is a bit more engaging and scenic than the TransAmerica trail I was following back then. Was actually very impressed with the overall beauty of the area. But the wind. The wind.

We pedaled grassy rollers through cattle country for a few days before the first storm hit us with golf ball sized hail in the middle of a 100 square mile treeless grassy field. Perfect! Fuck those things hurt! Crouched under our frame bags for cover, Sarah and I got pelted for what seemed like an hour but was more like 5 minutes before it let up. We took that as a sign and boarded the Amtrak at the next town we reached. That was a GREAT idea. The train dropped us off about 100 miles from Emporia allowing us to pre-ride the bottom half of the course on the way into town. Arriving in sleepy little Emporia 4 days early gave us time to relax, and witness the town’s overnight transformation into a gravel dentist convention. The town runs on gravel. Like even the subway sandwich franchise had a banner that read “welcome gravel grinders!” Pretty cute. 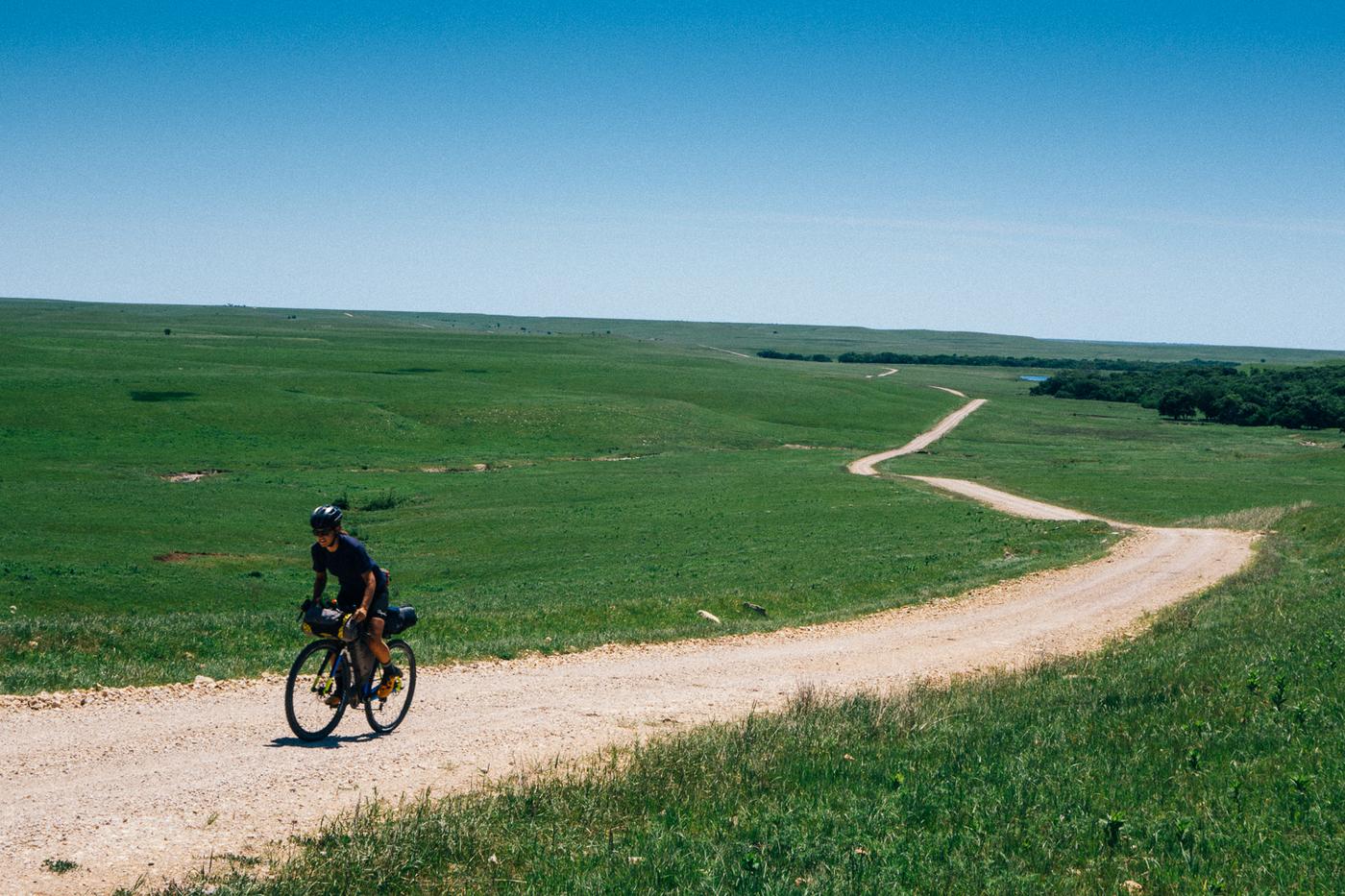 Sooooooo if you wanna know the gripping conclusion of this story, you’ll have to watch the forthcoming documentary “Project Y”. Good timing, cuz its gonna be released at the end of the week. And if yer doing Kanza this year, here is a pro tip: there is a 25-mile shortcut at the end of the course that surprisingly goes undetected by race officials… or so I hear…