Two years ago, Sonoma County native shredder and local legend Jason Silverek designed the TransCalifornia: a weeklong self-supported ride from Santa Rosa to Lake Tahoe and back again, with a dirt detour on the Rim Trail. I had planned on joining the expedition, but I bailed at the last minute due to gear issues, or lack-of-gear issues. Jason and a few others made the journey. When they recounted their journey to me upon their return, I developed a chronic case of FOMO and vowed to be prepared for the next one.

When the prospect of doing another TransCali came up, I swore I wouldn’t miss out this time. In our initial planning sessions at the local pub, we talked about hitting as much dirt as possible along the way. When Jason suggested we ride the Rubicon, I enthusiastically agreed. I had heard that the Rubicon was tough, but it sounded like a fun challenge. I had no clue what a grueling test we had in store for us.

As the departure date approached, I gathered my supplies for the journey. A Porcelain Rocket seatbag held my hammock, sleeping pad, pillow, extra chamois, extra socks, wool shirt, and AeroPress. In my Revelate Designs frame bag, I carried a tool roll, extra tubes, chain lube, patches, charger cables, coffee, snacks, and a few hand-rolled homegrown joints. By sewing cheap straps onto my sleeping bag’s stuffsack, I made a makeshift handlebar roll that I could use to tie down random junk, including the token dangling blue enamelware coffee mug. All of this was secured onto my Bruce Gordon steel cross bike wearing 700x43c knobby tires, drop bars, and a 1×11 drivetrain. This setup was great for cruising the backroads of Sonoma County, but could it handle the TransCali? Only one way to find out. 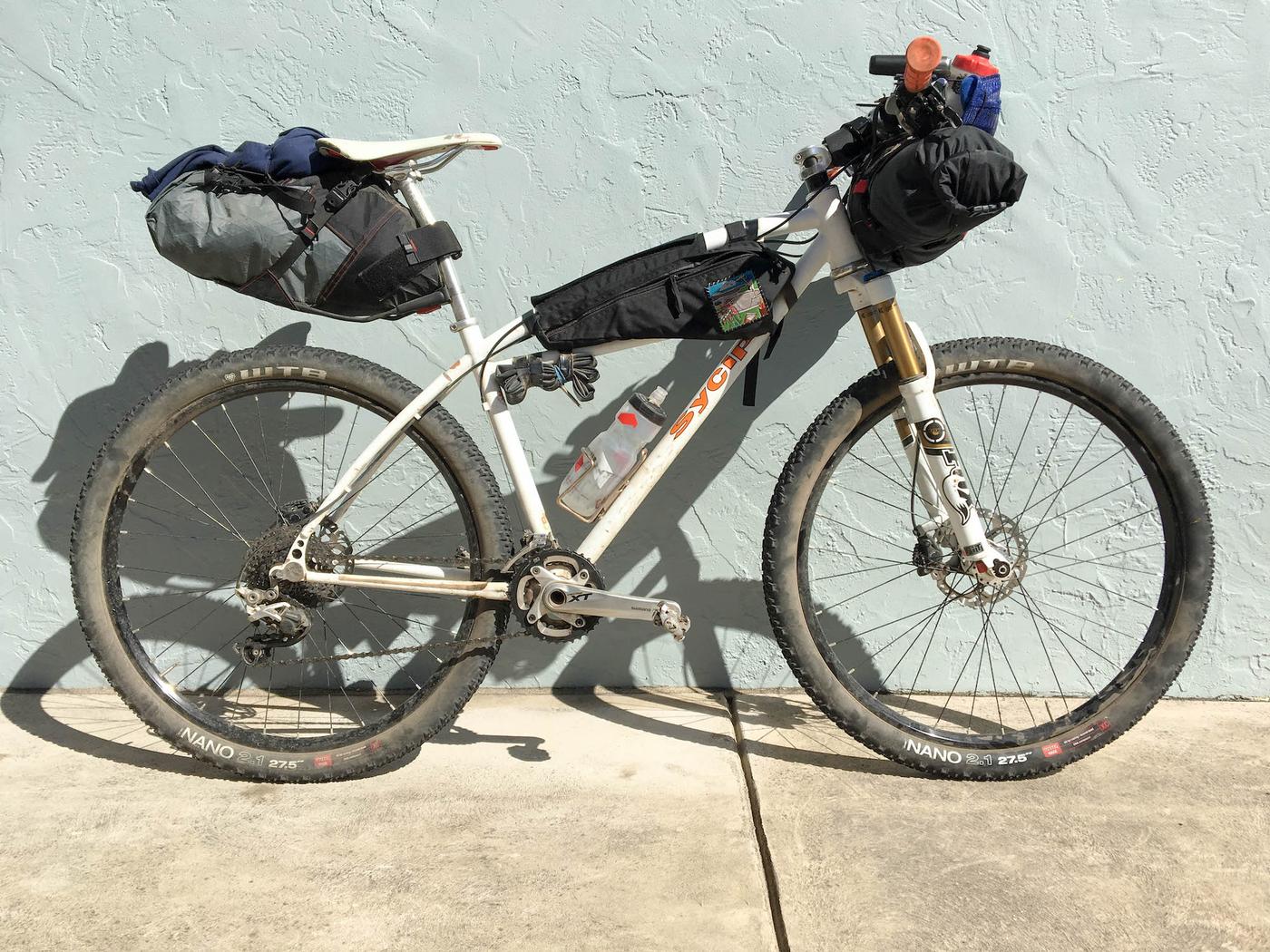 The first day finally arrived. Our departure convoy took off on a sunny Friday morning. After a brief cappuccino stop at Jeremy Sycip’s compound, we ascended the fire road to the peak of Sugarloaf. A loose, brushy, bushwhacking descent dropped us down to the Napa Valley. We all made a snack stop at the bruschetta truck at the Clif Family Winery – so chi-chi, so Napa. Then our chaperones went their own way, and our quest truly began.

High points from the first day, which consisted of long, wavy stretches of blacktop in temperatures approaching the mid-90s, included a revitalizing dip in the Putah Creek and a big, fancy steak-and-margaritas dinner in Winters. We choogled onward to Sacramento, where we encountered a creepy scene straight out of “Dawn of the Dead”: hundreds of people wandering on the train tracks in Old Town, expressionless faces aglow by the light of their iPhones, catching Pokémon. That bizarre scene made us grateful to be getting out of civilization for a while. After a 120 mile day, we pulled off the bike path to set up our hammocks in a gazebo alongside the American River. Then we passed the eff out.

We woke up in a highly-trafficked fitness zone. Tri-dorks and aeroadies whizzed by as we prepared coffee and ramen cups for breakfast, then broke camp and groggily ground out the bikepath miles to Auburn. After a light lunch at Auburn Aleworks, we hit Forest Hill Road. Miles and miles of constant climbing in a pine-walled corridor eventually led us to hot pizza pie and icy Schöfferhofer on tap. Spectators outside the pizzeria cheered on Tevis Cup horseback riders as they clopped past on glowstick-adorned ponies. We sniffed out the perfect deep woods campsite and caught some hard-earned sleep. We climbed all day the next day. It was a thousand feet of elevation gain before we stopped at Robinson Flat for water from the pump, a salami sandwich lunch, and a quick nap in the shade. Then we climbed some more. Forest Hill turned to dirt, then it became hazy clouds of moondust. We began to dread every short descent, because it only meant another lung-busting climb was waiting around the bend. Climb, descend, repeat ad infinitum. As the sun set, we finally reached Serene Lake. Jason bought three celebratory beers off a vacationer there and we gave cheers. Warm beer never tasted so good. Jay found a Hydrobike on the shore and took it for a joyride on the glassy, sunset-lit water.

We descended Donner Pass to Donner Lake in the pitch black darkness, hooting and hollering on our way down. We met Chuck Ibis at the east end of the lake. He gave us a ride in his F150, stocked with potato chips and road sodas, then cooked us a steak dinner in his swanky cabin. Our hero.

The high life was on tap the following day, our “rest day”, as we sampled the Tahoe-Donner trail system with the singletrack sommelier from Ibis Cycles. We gathered supplies to prepare for the Rubicon, then partied late into the night. Chuck, Chappy, and Kurt made for rousing dinner companions, but eventually we crashed, knowing we had to be prepared for another day of riding. 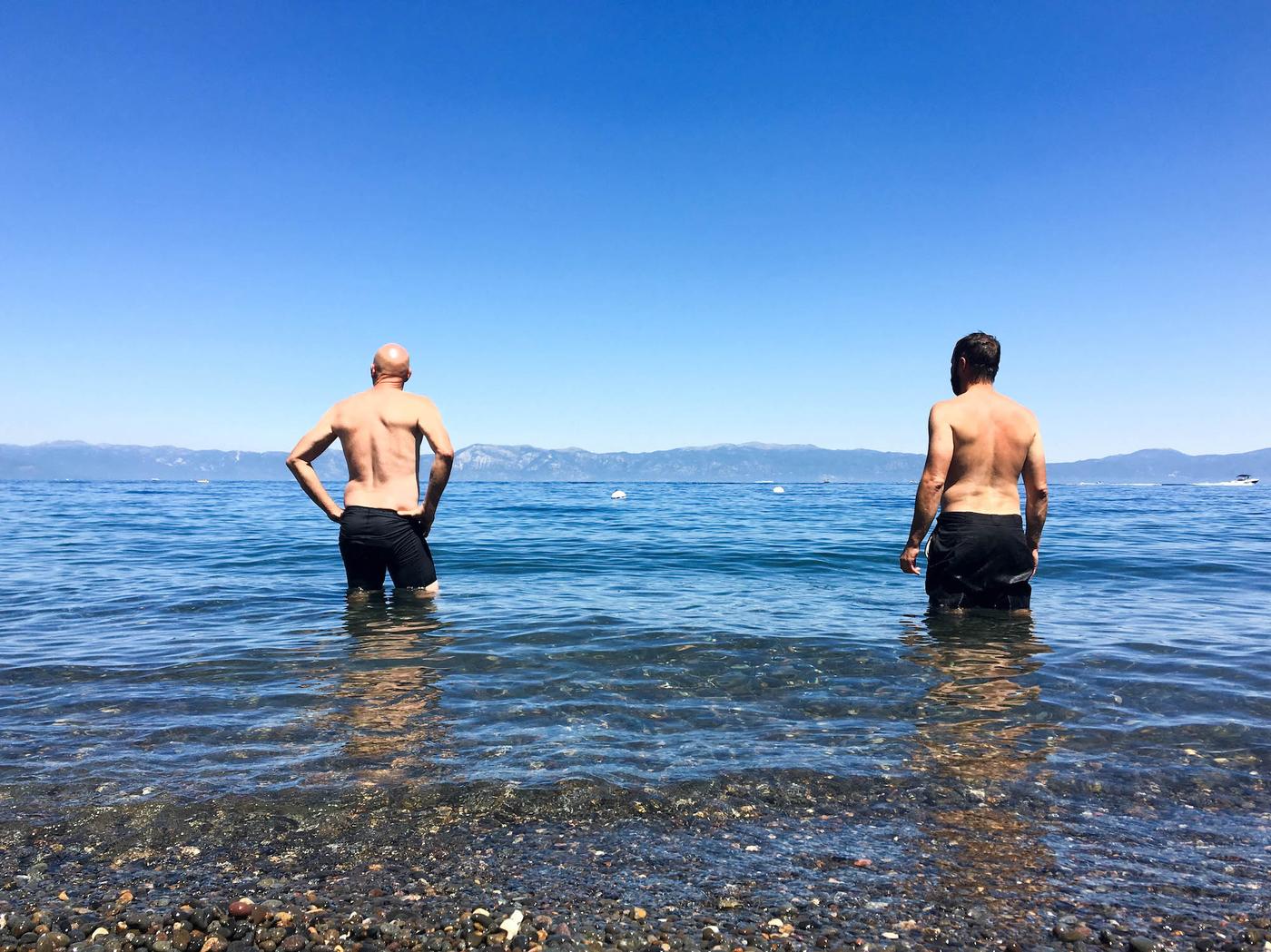 The allure of hot showers and soft beds was difficult to escape, but our odyssey continued onward the next day from Truckee to Tahoe. We mega-relaxed in the clear waters of Lake Tahoe. Then we hit the Rubicon. Here’s a little history: the Rubicon Trail was originally a Native American trail. It was filled with gravel and became a roadway for Model A travel at the turn of the 20th century. After several decades of disuse it became a popular postwar recreation destination using capable 4-wheel drive Jeeps. Since then, it has become a legendary proving ground for rock crawlers. We happened to be riding the Rubicon just a few days before the 64th annual Jeepers Jamboree, so we encountered all sorts of badass wheelers on our journey west and stopped to watch them conquer obstacles on Little Sluice and Cadillac Hill.

Bikepacking the Rubicon was stupid, especially on a drop-bar bike with 43c tires at 60psi. But somehow I managed to make it through without flatting or breaking myself or my bike. Jason and Jay were both on Sycip hardtails with 27.5 WTB Nanos, and they were both able to ride just a few more sections than me. Luckily, the scenery was worth every bit of pain. There were several high alpine lakes with moonstone-clear water, surrounded by healthy pines and wildlife, and we took every opportunity we could to strip off our sweaty gear and go for an invigorating dip in the water. Almost paradise. 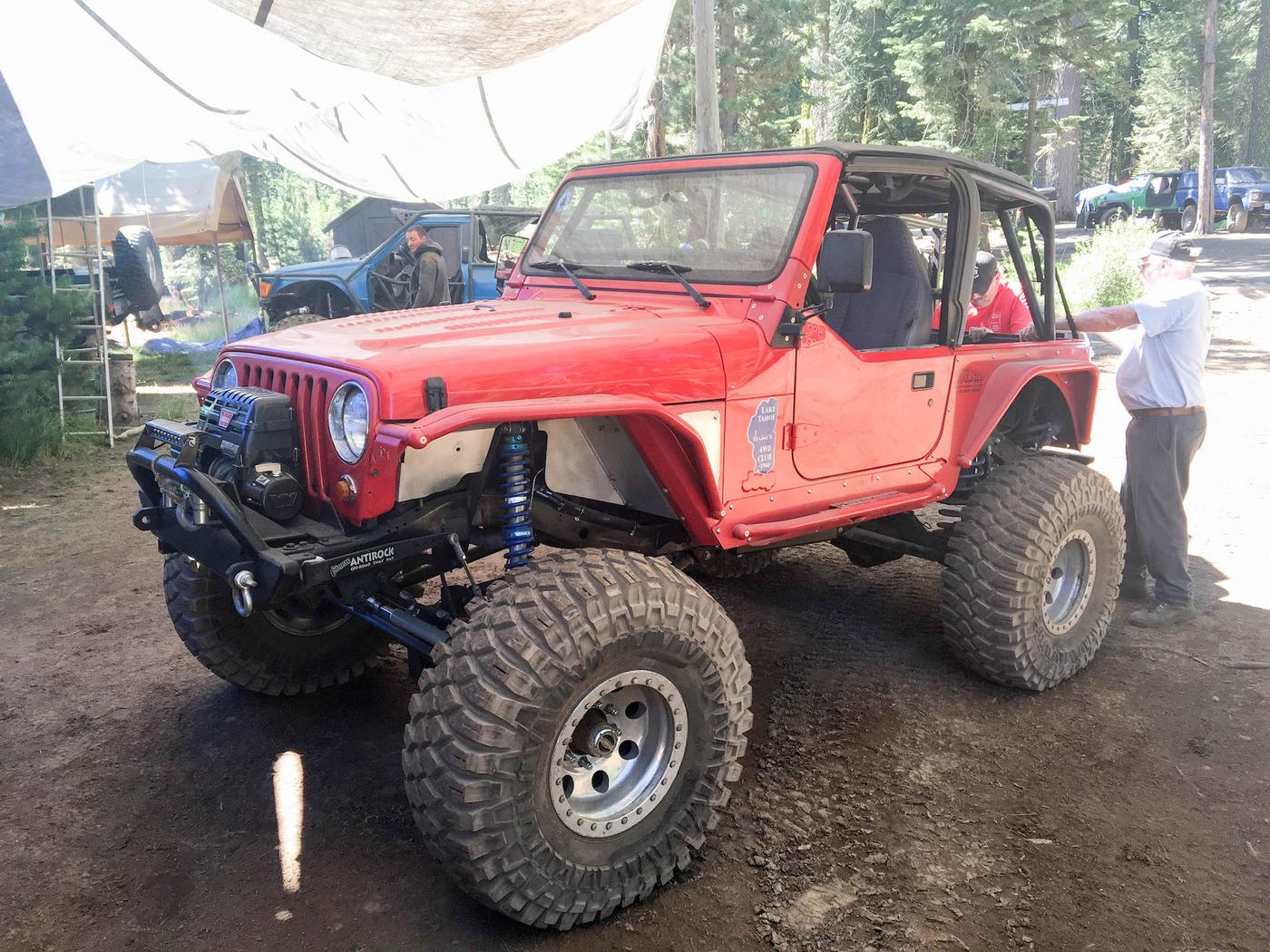 The second day on the Rubicon ended at the beginning of the 4×4 course, on polished granite slickrock that provided plenty of opportunities for carving bowls, traversing slabs, and screwing around. We emerged amidst a gathering of rock crawlers of all types, bummed three ice-cold Silver Bullets, and then hit the road again. After a brief beer stop at the redneck haven known as Uncle Tom’s Cabin, then another brief stop at a Clamper bar in Georgetown, we poached a campsite in Coloma. As we set up camp and dipped in the American River, a glowing iridescent meteor arced slowly through the night sky, accompanied by a shower of sparks tracing its path. Whether it was aliens, nuclear war, or Chinese space junk burning up in the atmosphere, we didn’t care. Time for sleep.

We retraced our steps from Folsom to Davis. A pair of barn owls in a tree danced to the mandolinist jamming on a restaurant patio, and we watched the birds in childlike wonder for a while as we enjoyed shaved ice and let the cool night air settle on the valley. Then we set out for Winters. We considered a hotel for the night, but as it turned out there aren’t any hotels in Winters, so we made camp in a baseball dugout on the high school campus and fell asleep to the rhythmic clicking of sprinklers. The final leg of the TransCali flew by, and before we knew it we were making the final road ascent over Spring Mountain to Santa Rosa. We beelined to our local pub, where it had all began, for celebratory pints amongst friends. Seven days, 500 miles, and just under 40k feet of climbing. TransCali was in the bag.

The only thing I would’ve changed, if I were to do it all over again, would be to ride a proper mountain bike with enough suspension to tame that nasty Rubicon. But at the end of the day, a bike is just a tool, and one’s most valuable tool is their mindset. In the words of Buckaroo Banzai, “No matter where you go, there you are.” The ability to smile through the pain, to enjoy the company of one’s companions, these are two things that make a trip worth taking. Thanks to my road dogs Jason and Jay for making the TransCalifornia a trip I’ll never forget.