Two Kleins in one week? What are the odds? Today, we’ve got a killer feature from The Pro’s Closet museum, penned by Mike Wilk and photographed by John Watson, showcasing Tinker Juarez’s 1993 “Team Storm” painted Adroit EX. If you were a grom or an adult back then, you’ll recognize this bike. Without further adieu, let’s get to it!

There it is. Under that puddle of drool. I’m 13 years old and touring the pits at the Mount Snow NORBA National in Mount Snow, Vermont. I’m standing outside the Klein pit; in the stand is Tinker Juarez’s “Team Storm” painted Adroit EX. I can hear the soft melody of a harp playing, and a beam of light descends from the sky. Birds are singing, and a wave of purple-anodized euphoria envelops me like a warm blanket. It’s a little early in this story for a digression, but I will make one anyway. 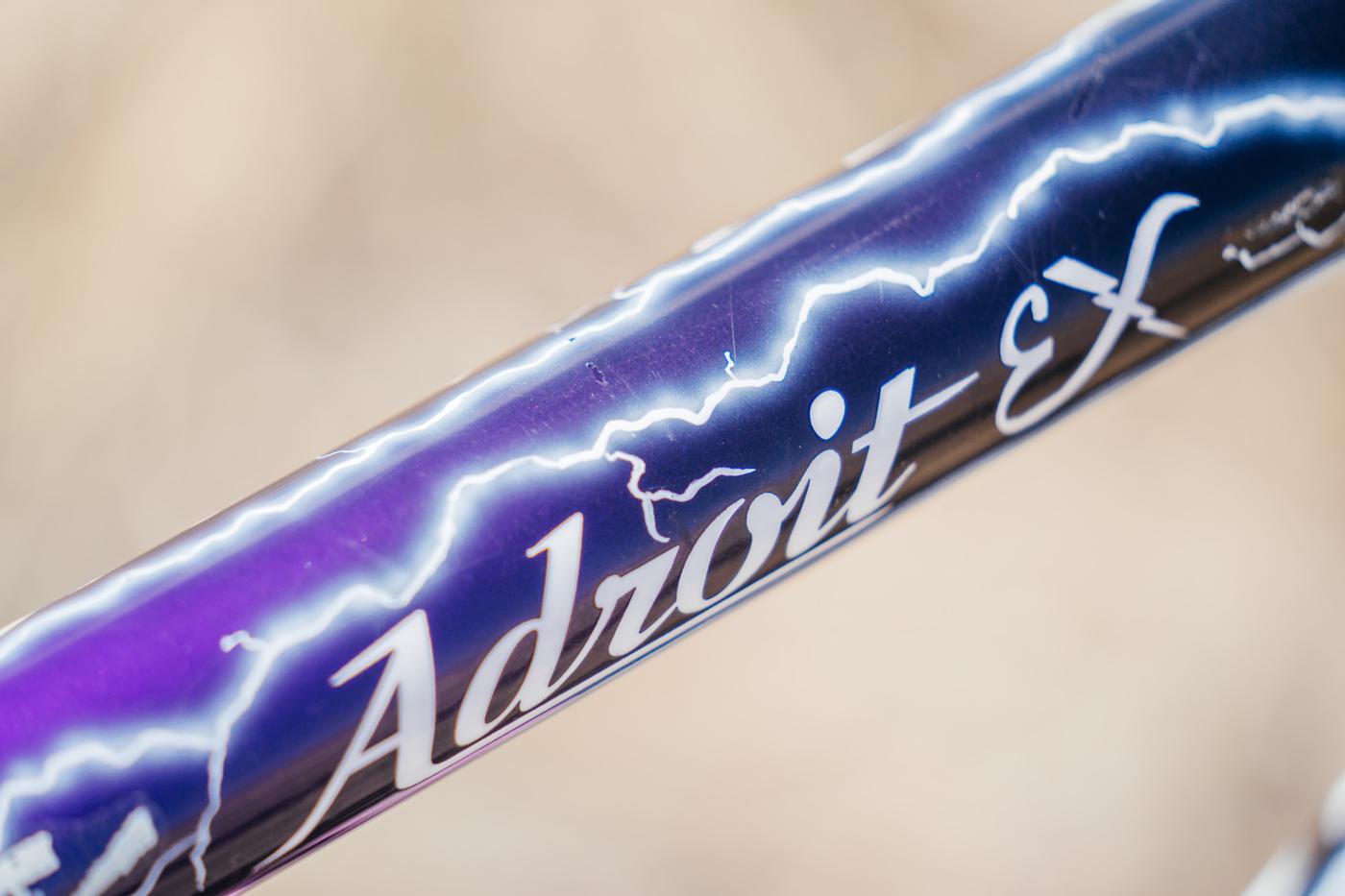 Gather ‘Round: Professional Mountain Biking in 1993

Pull up a chair, kids, and I’ll tell you of simpler, pre-Internet times where our access to mountain bikes in the media existed solely in the pages of magazines like Mountain Bike Action. MBA had plenty of bike pictures, but most were in black and white. Full-color shots of bikes were often featured in ads and race coverage, albeit muted by dust and mud from racing. So, one could only dream of the true shine. Or glow. If you opened my 7th-grade locker in 1993, you’d see three pages ripped from MBA taped to the inside: John Tomac at Traverse City, Missy Giove from the Kamikaze, and Tinker Juarez aboard his Team Storm Klein at the Mont-Sainte-Anne World Cup. 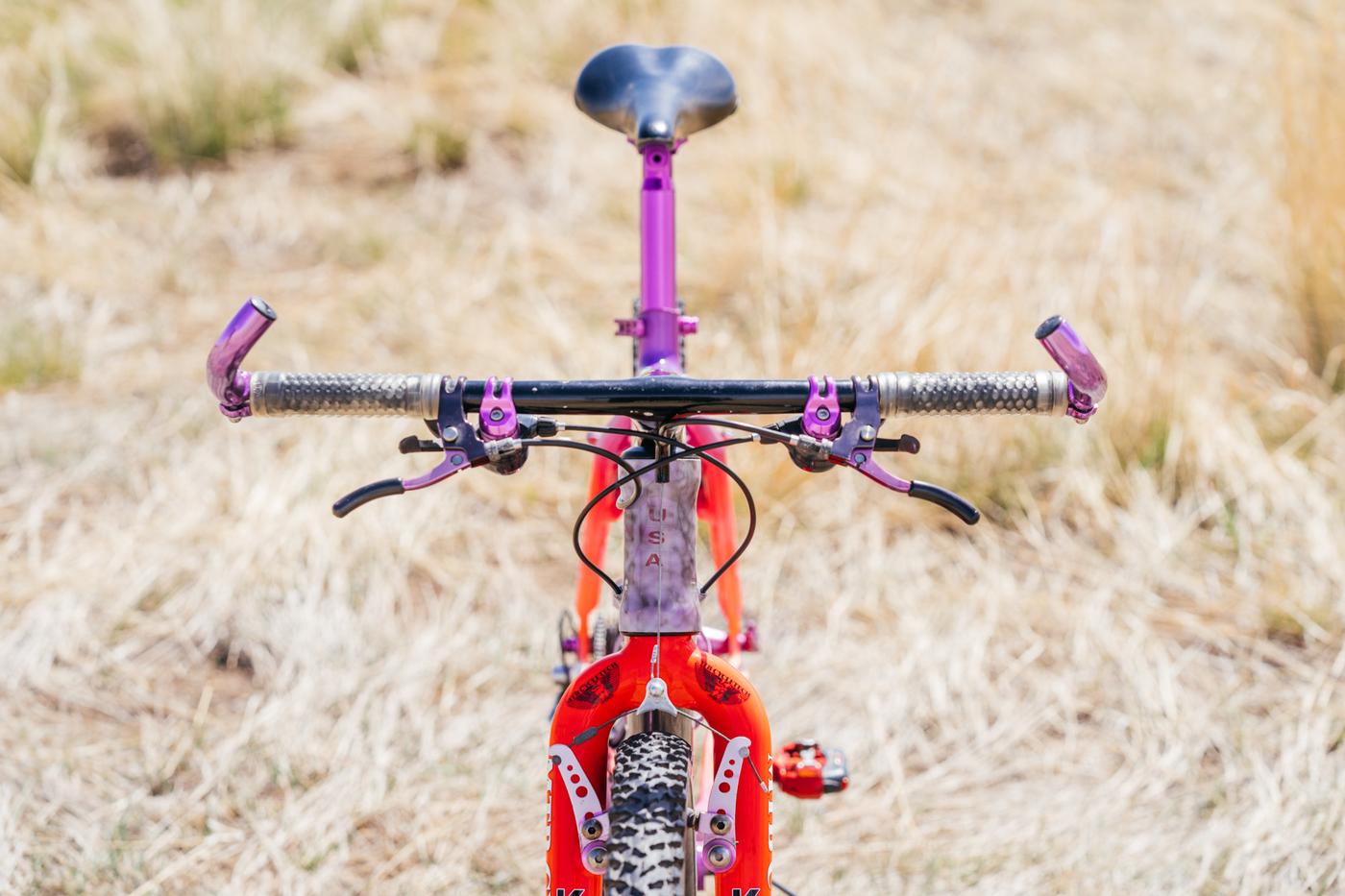 So there it was. In real life, this Klein was nearly too much for my prepubescent brain to take in. I had to borrow my Dad’s Ray Bans because the gold Rock Shox Mag 21SL-Ti forks were too bright. The purple on Grafton and Ringle components was so livid that I’m certain the hue existed beyond the color spectrum. I am embellishing, but this story was designed to be embellished. And there was Tinker, standing at least 7 feet tall, barking orders to his mechanic in a thunderous, godlike voice. He won by 20 minutes that day and was declared the series overall champion despite three races remaining in the season. As confident as I am that my recollection of this event is 100% accurate, I’m even more confident that Tinker’s bike was the coolest f—king thing I had ever seen. 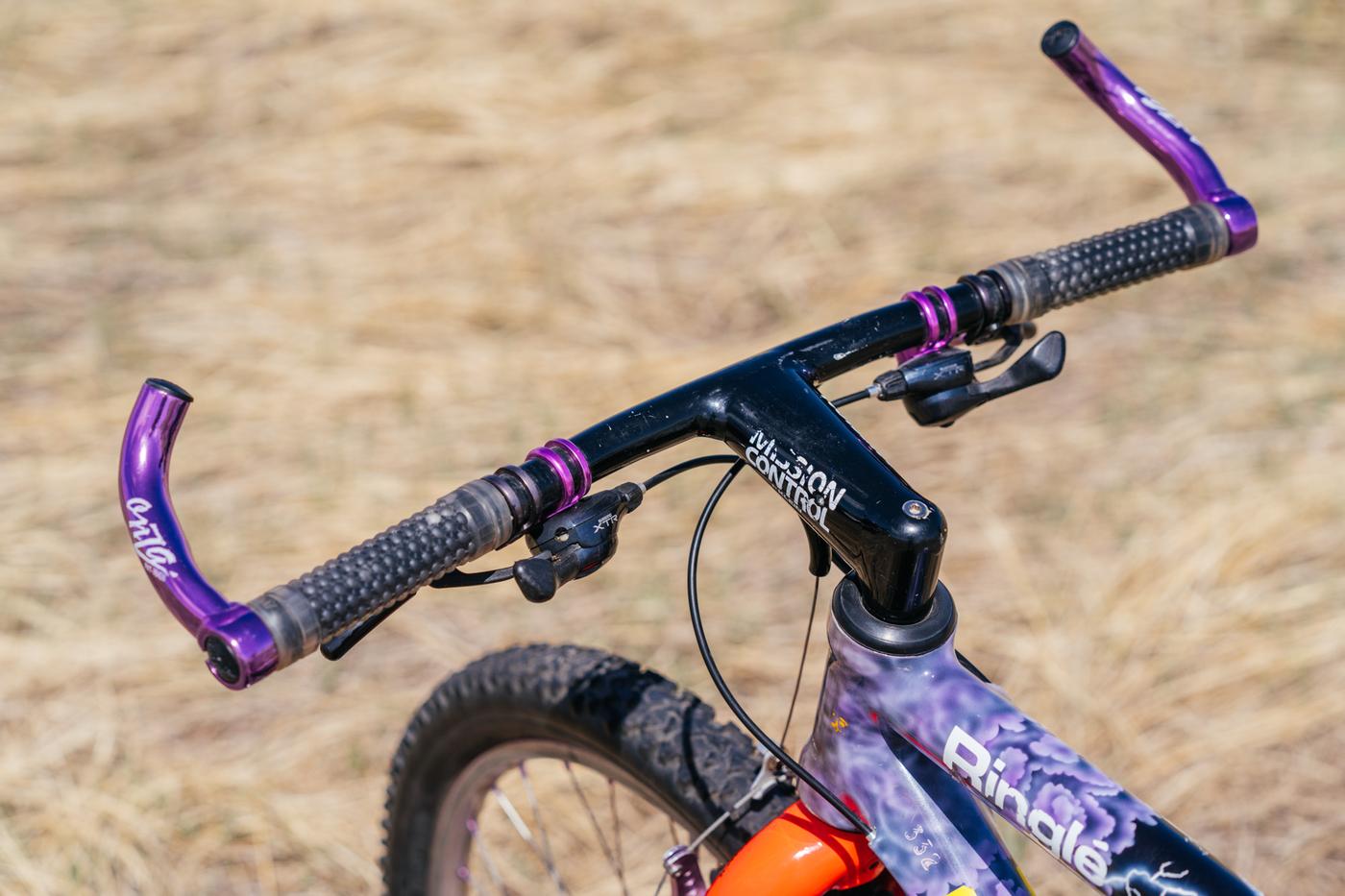 Y’all don’t need me to talk Klein to you. You know the brand, the fancy paint, the fat aluminum tubes, the smoothed welds, and the ridiculous price tags. Yes, Jerry Seinfeld had one in his apartment (a Pinnacle, scoff). Gary Klein was an MIT grad who, with a grant from his alma mater, started making road bikes out of oversized aluminum tubing. 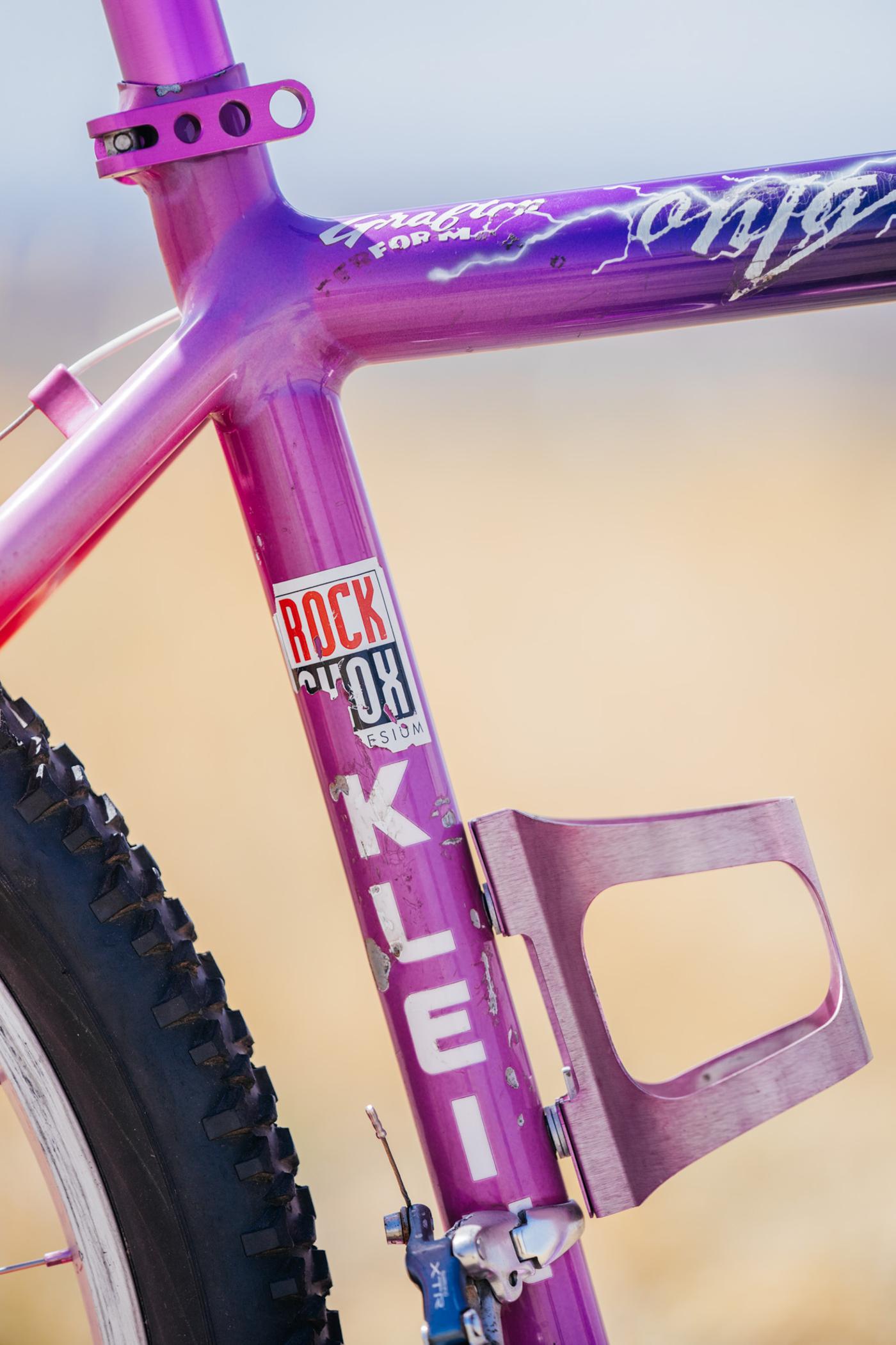 He added mountain bikes later on. This was around 1980. Gary and Klein (the company) were incredibly forward-thinking and designed some proprietary components, dozens of frames, both rigid and suspended, filed some patents (ok…. A lot of patents), and finally sold out to Trek in 1995 at the height of Klein’s popularity. Trek stifled creativity and killed the brand. You don’t need me to talk Tinker to you. You know the icon, the dreadlocks, the Palmares a mile long, the countless images of him climbing the impossible hills in the big ring. And no, he’s not 7 feet tall, and his voice is far from godlike. And I can’t imagine him barking orders at anyone because he’s the sweetest professional athlete I’ve ever met. He’s done as much as you can with a career in mountain bike racing, and he’s still at it today. 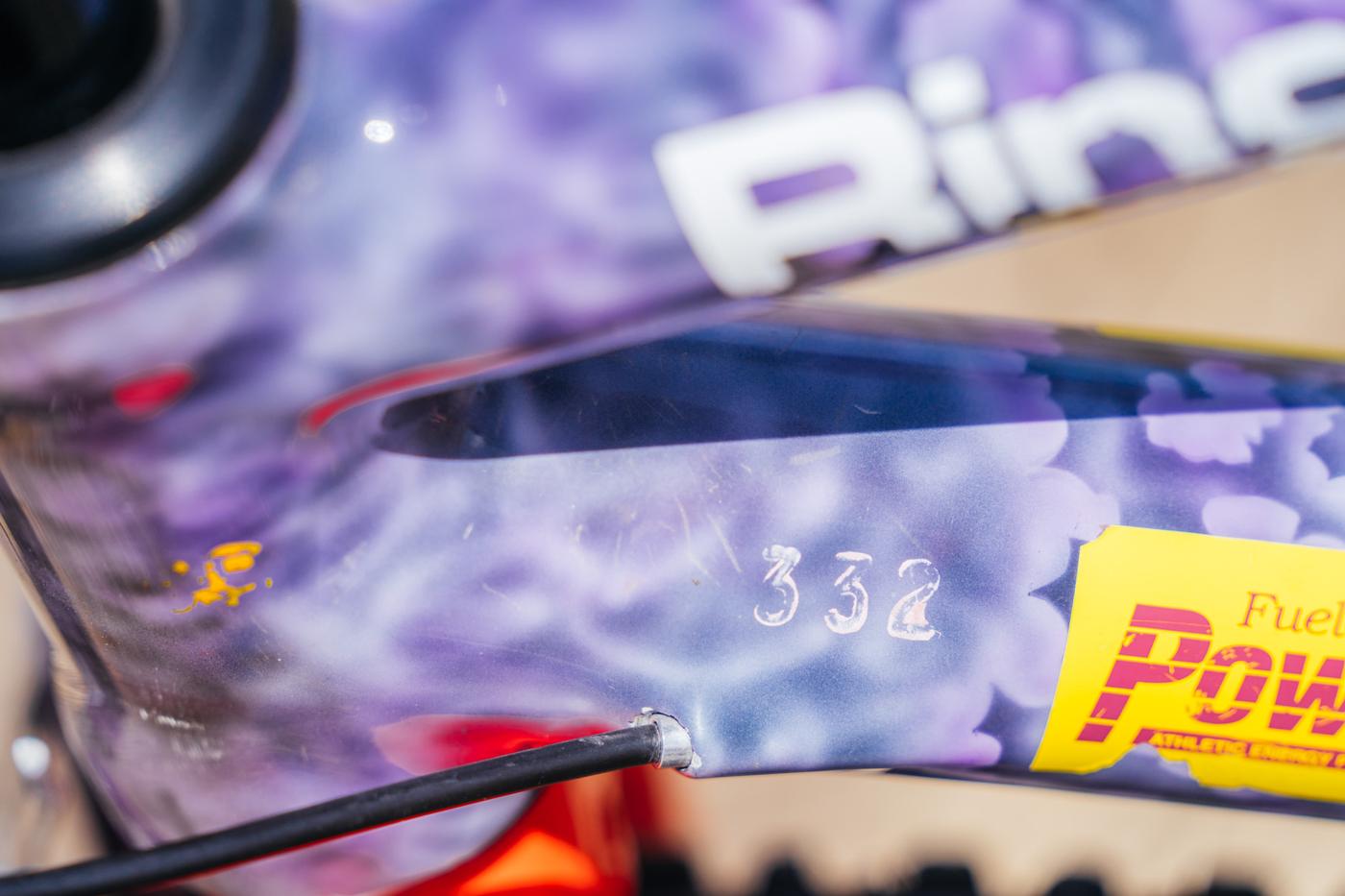 I want to talk about this bike. The Adroit (adj for “clever or skilled”) was Klein’s flagship MTB — and you couldn’t afford it. Like the Attitude, it had a 1 5/8″ diameter down tube. Both the Adroit and Attitude had double butted Al tubing, but the Adroit used larger diameter tubes and the stays had a thin layer of boron/carbon fiber to add layer of vibration damping. It had all the Klein-y things that made Kleins cool and made mechanics curse: Press-fit bottom brackets, internally routed cables, headsets that you couldn’t work on, and yes… that paint. The Adroits had unique, drilled out dropouts further separating them from the Attitude.

As palpable as my excitement was to see this bike in person for the first time in 1993, seeing it again 25 years later as an adult was one of the most disappointing things I can remember as an adult. This bike changed hands at the Keyesville Classic a few years ago, and when it was brought out, I think we all died a little. The bike had been neglected and left outside for years; thus, once-bright Grafton and Ringle parts were cracked and faded beyond saving. As well as the paint. 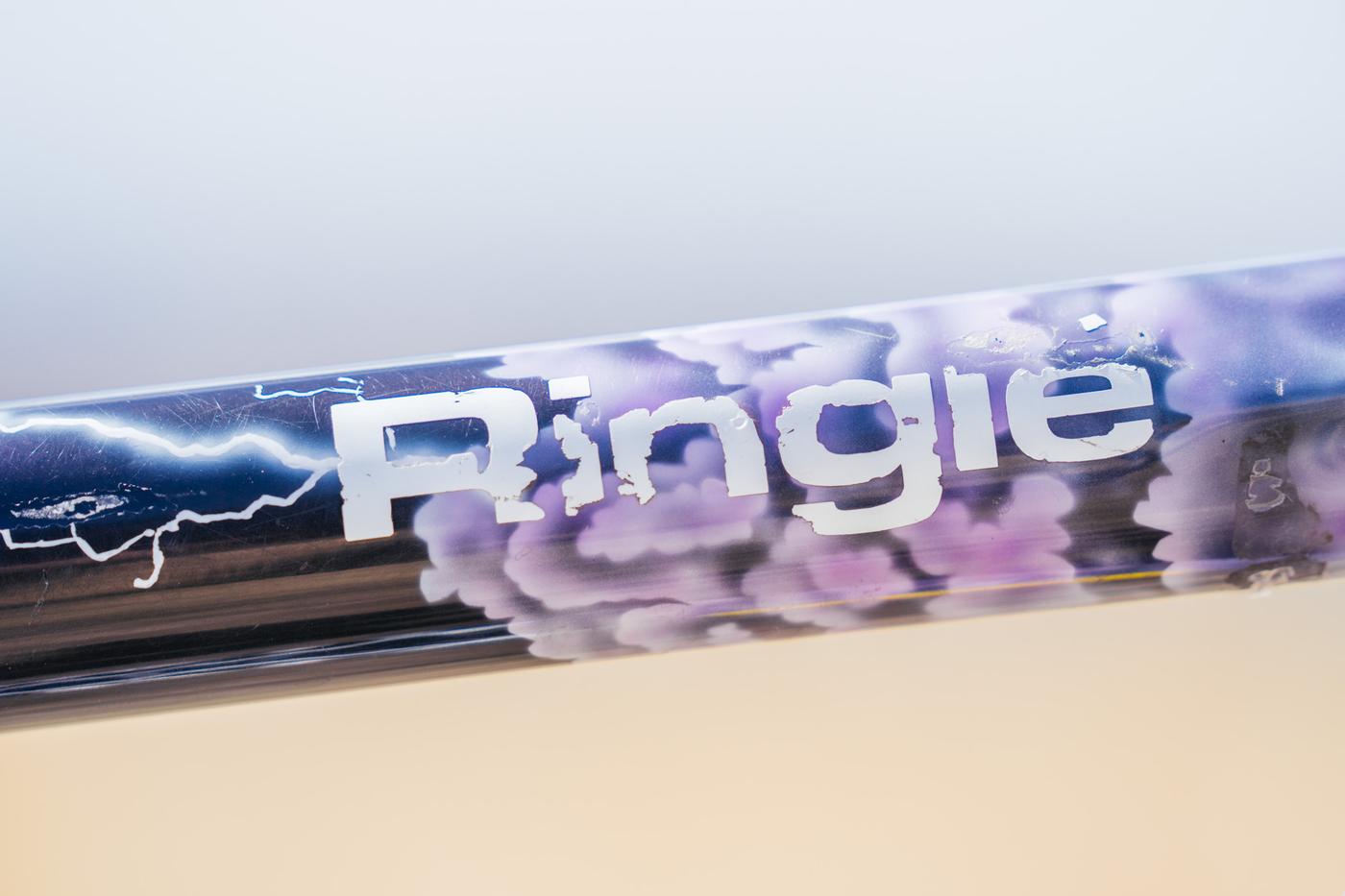 Let’s talk about Klein paint because, let’s face it; no one paid thousands for an aluminum frame with a straight-blade aluminum fork for its ride quality. It was worth owning a Klein catalog just to look at the paint schemes. Moonrise fade. Mardi Gras. Puget Morning. The paintwork on a top-shelf Klein was just awe-inspiring, and this bike’s “Storm” theme was the height of Klein’s painters’ powers. Cory Anderson we think, or even possibly Dale Richart painted this bike. Dale more of less invented the Storm paintjob. The level of detail involved in painting a bike that would get trashed on the NORBA circuit is truly hilarious. They must have been five figures deep into this thing by the end. 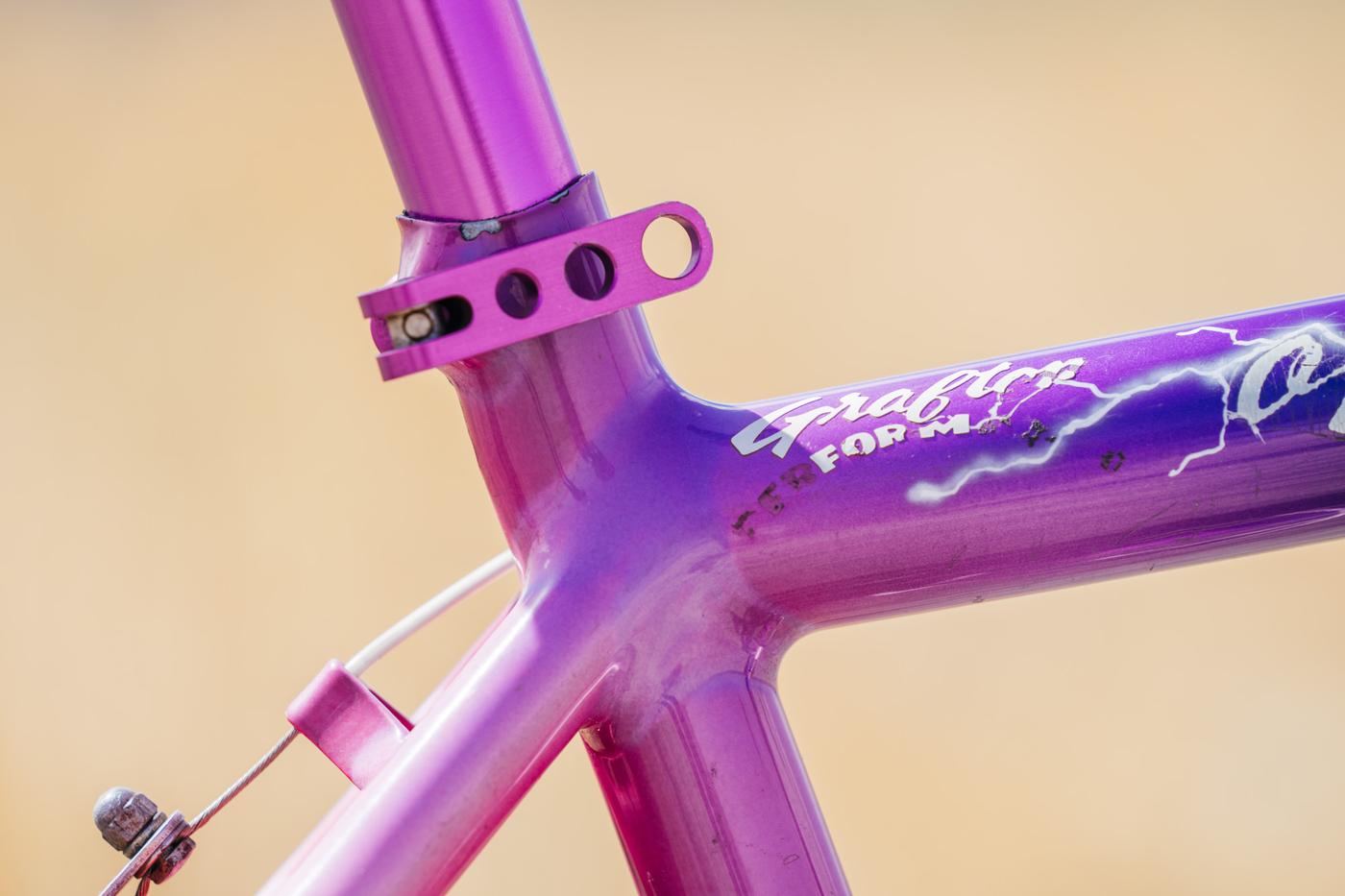 Speaking of trashing this thing on the NORBA circuit, where is the gold Rock Shox Mag 21 SL Ti? Grab that chair again, kids and I’ll tell you about the 1993 UCI World Championships in Metabief, France. It was a muddy mess, and the Americans got smoked. Tinker was our top finisher in ninth on this bike with a rigid Klein Unicrown fork borrowed from the Euro Klein distributor, MTB Cycletech. 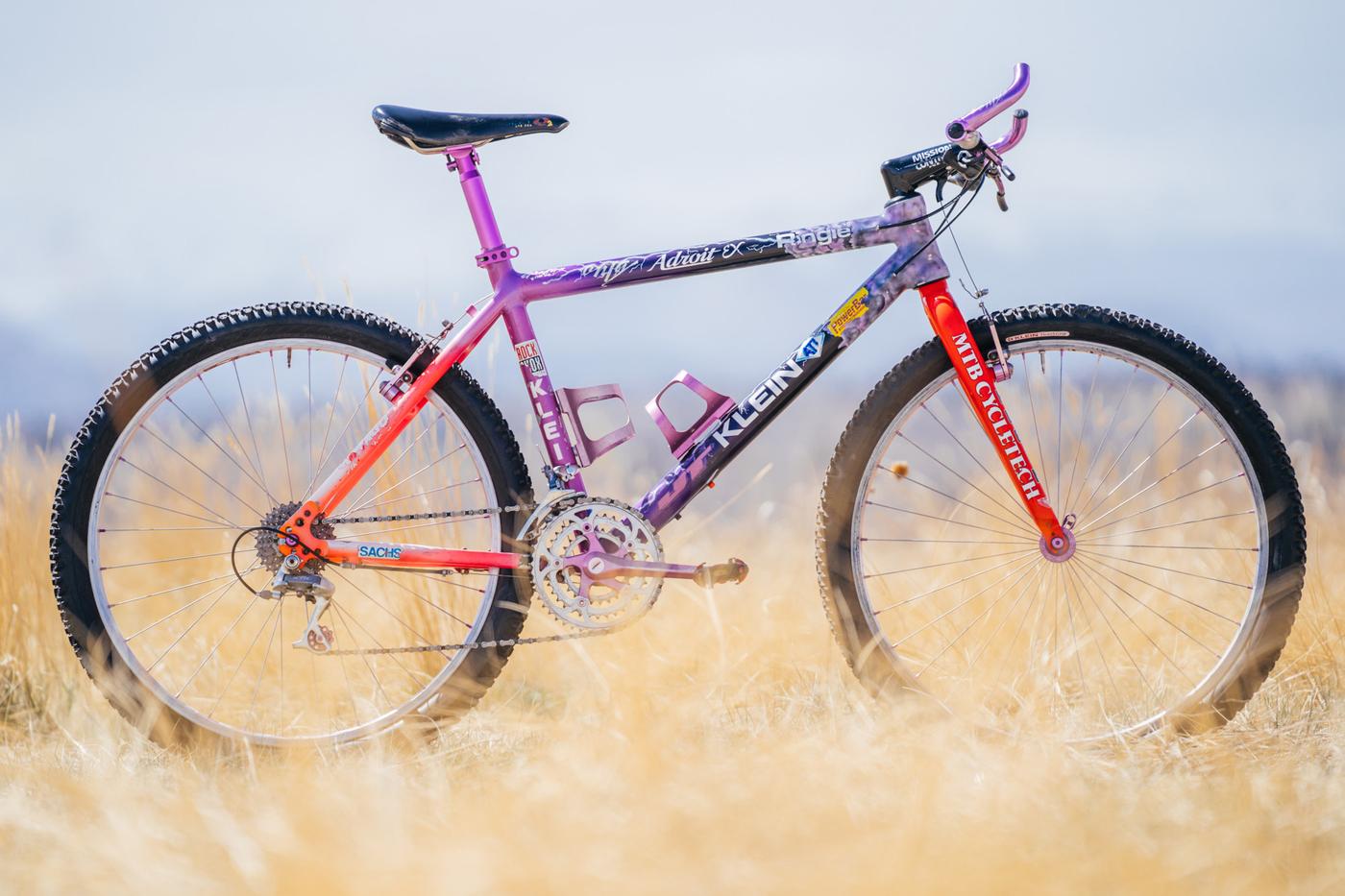 And that’s how it sits today, raced hard, put away wet, and forgotten. Sometimes, that’s the way it goes with these bikes. At least it’s not still out there, leaning against some barn baking away in the sun…