Ten weeks ago, I first introduced you to the Toyota Prius Projects concept bike. We first took a look at the design sketches and began to establish an intent, or direction for the project. Then we looked at the company who would be designing and fabricating the bike, Parlee Cycles. Later, DeepLocal‘s involvement was revealed, alluding to some form of new technology being implemented into the bicycle’s design. Finally, last week we took a look at the neuron helmet and discussed how DeepLocal plans to use this readily-accessible technology to actually shift the bike. So here we are, the final week of the Toyota Prius Projects concept bike.

There’s a lot to look at so check out more below! While the earlier prototype was a matte carbon finish, the team wanted to embody the branding of the Prius with a white finish. It’s eerie how similar the final product is to the initial design sketches. Parlee’s execution is flawless. But that’s only half of the bike. What about the neuro helmet? Well, Patrick from DeepLocal flew into Boston to ensure everything was working as planned. After a few minutes of setting up, the electronic shifting was moving up and down the cassette with ease. Seeing this in person is pretty amazing. Just think, one day, the cycling industry might embrace this technology! As the bike was being built, we all waited with anticipation. 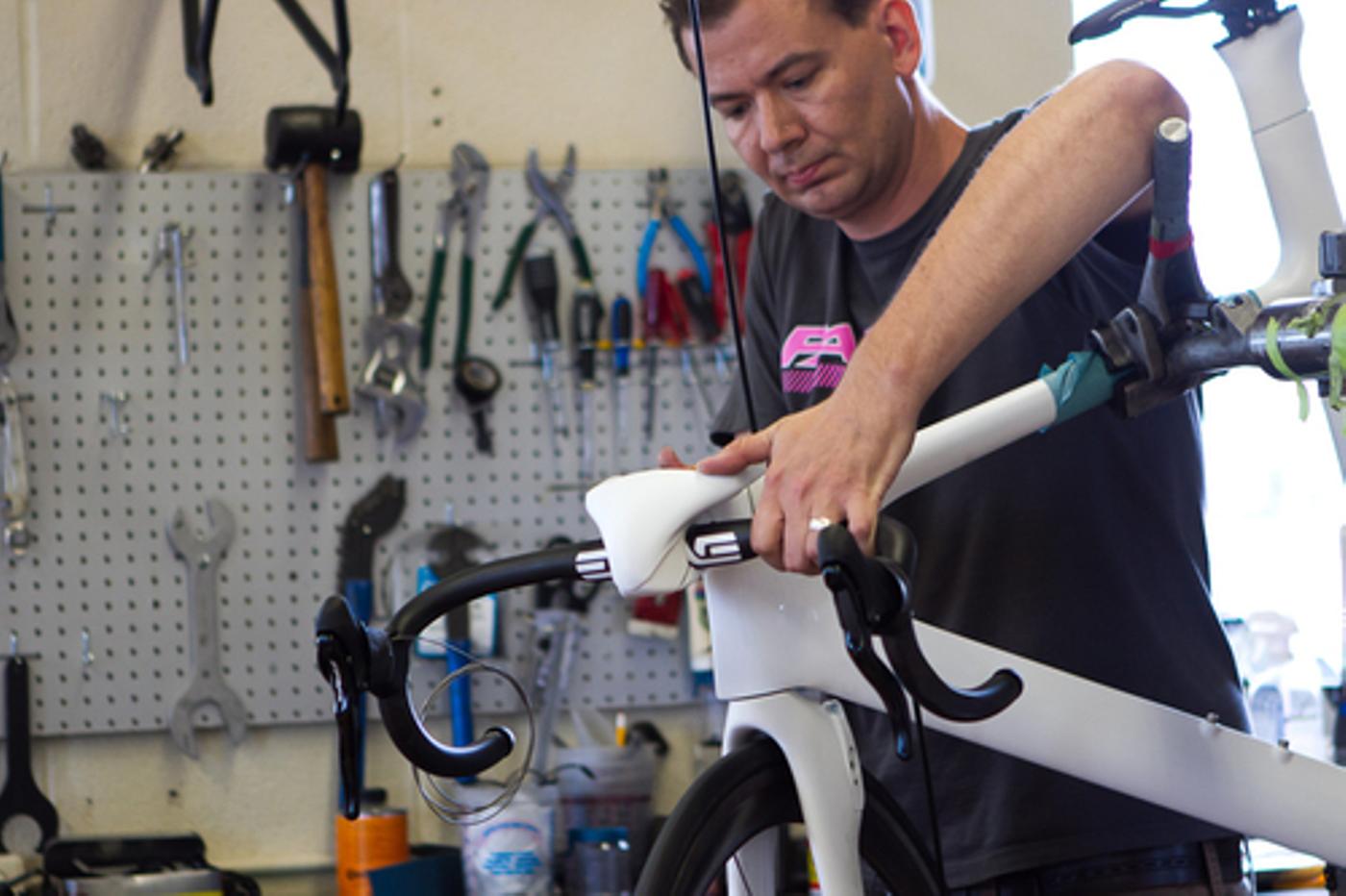 As each bolt and quick-release was tightened, it meant we were that closer to testing the bike out. The second the bike hit the ground, it begged to be ridden. One of the Parlee team riders had been training with the neuron helmet and the day had come where he would be the first person on Earth to actually shift a bike with his mind. 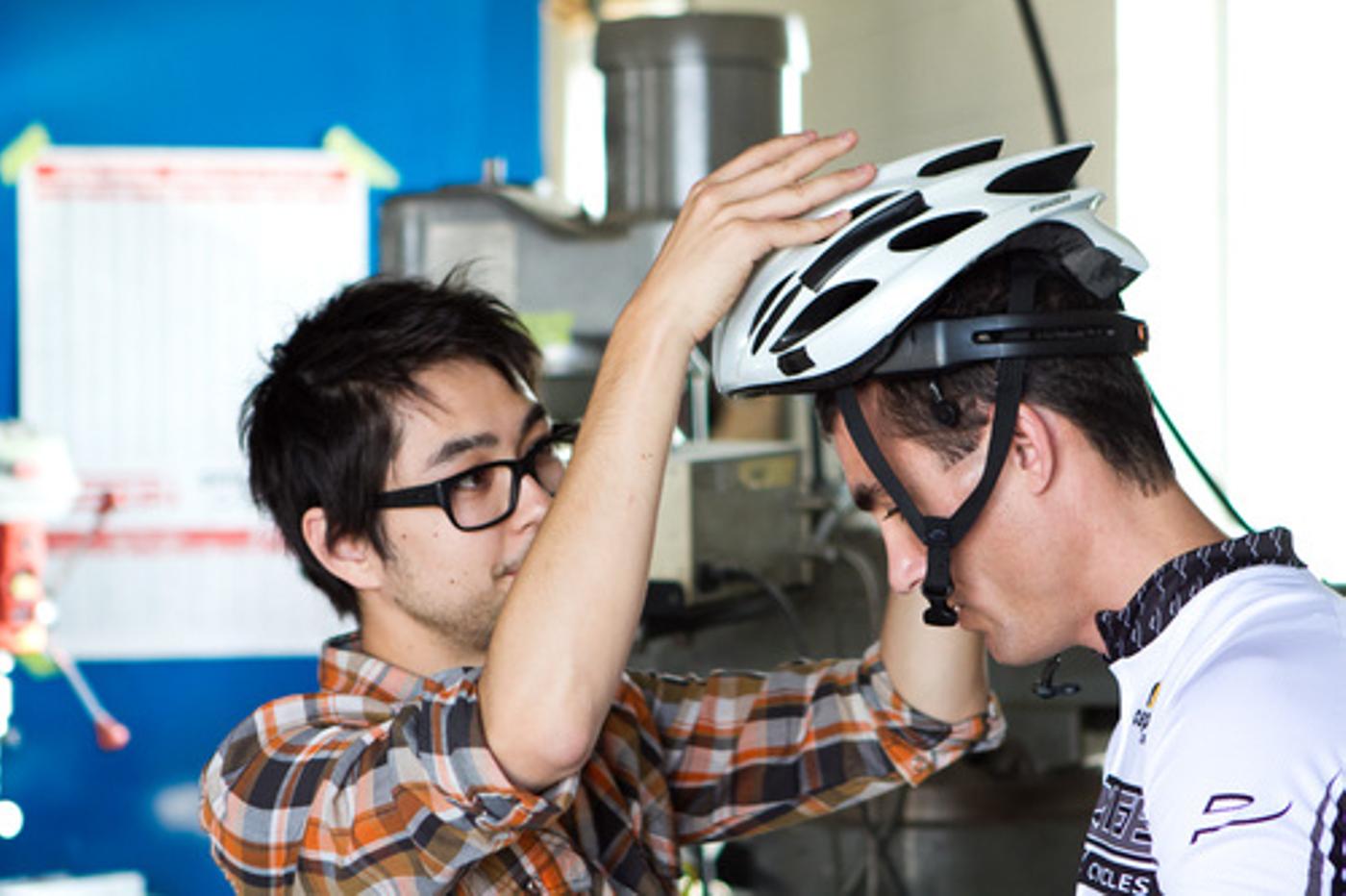 Patrick fitted him with the helmet and ran through some preliminary exercises. As he mounted the bike and began to spin on the trainer, he concentrated on moving the rear derailleur. We all watched in amazement as the bike began to shift. With each pedal stroke, the rider became more comfortable controlling his cadence and moving through the cassette. DeepLocal had designed a smartphone app that would monitor heart rate, speed and cadence. This really opens up doors to even further integration. For example, implementing GPS could allow the rider to record data at specific moments, future programming the bike to shift on its own: the definition of intelligence. Of course the rider would be able to override these commands but just addressing these possibilities open new doors to technology and cycling. It’s really exciting to think that everything on this bike is open at the consumer level. Nothing DeepLocal or Parlee created is unobtainable: it’s conceptual without being cryptic. Simple ideas brought along complexity. The team asked “what if?” and were able to produce something that hadn’t been done before. Isn’t that what innovation is all about? Sure, the end-product is elegant and futuristic looking. But nothing is theoretical. You can see here, it’s still a bike: two wheels and a crankshaft. It relies on a human being to move, in more ways than one. For decades, the bicycle has remained very much the same but through the experimentation of the Toyota Prius Projects, the team has prosed some very important questions. How the world addresses these innovations will only influence the future of the bicycle and while the form will always be same, you can’t stop where the mind will take us. Is this the future of cycling? Who knows, but it didn’t hurt to have a little fun along the way.

While this is by no means the end of the Toyota Prius Project concept bike, it is a point of departure. The bike is now being prepped to be sent around the world and as with any innovation, the public will determine how these technologies trickle down into the market.

It’s been an incredible journey for me to document this project from the humble beginnings to the successful end and I can’t wait to see what the future holds. It’s kinda cool to think that this entire project was inspired by and influenced by the design of the Toyota Prius. There’s more to come, so just sit tight, hold on and keep pushing forward!