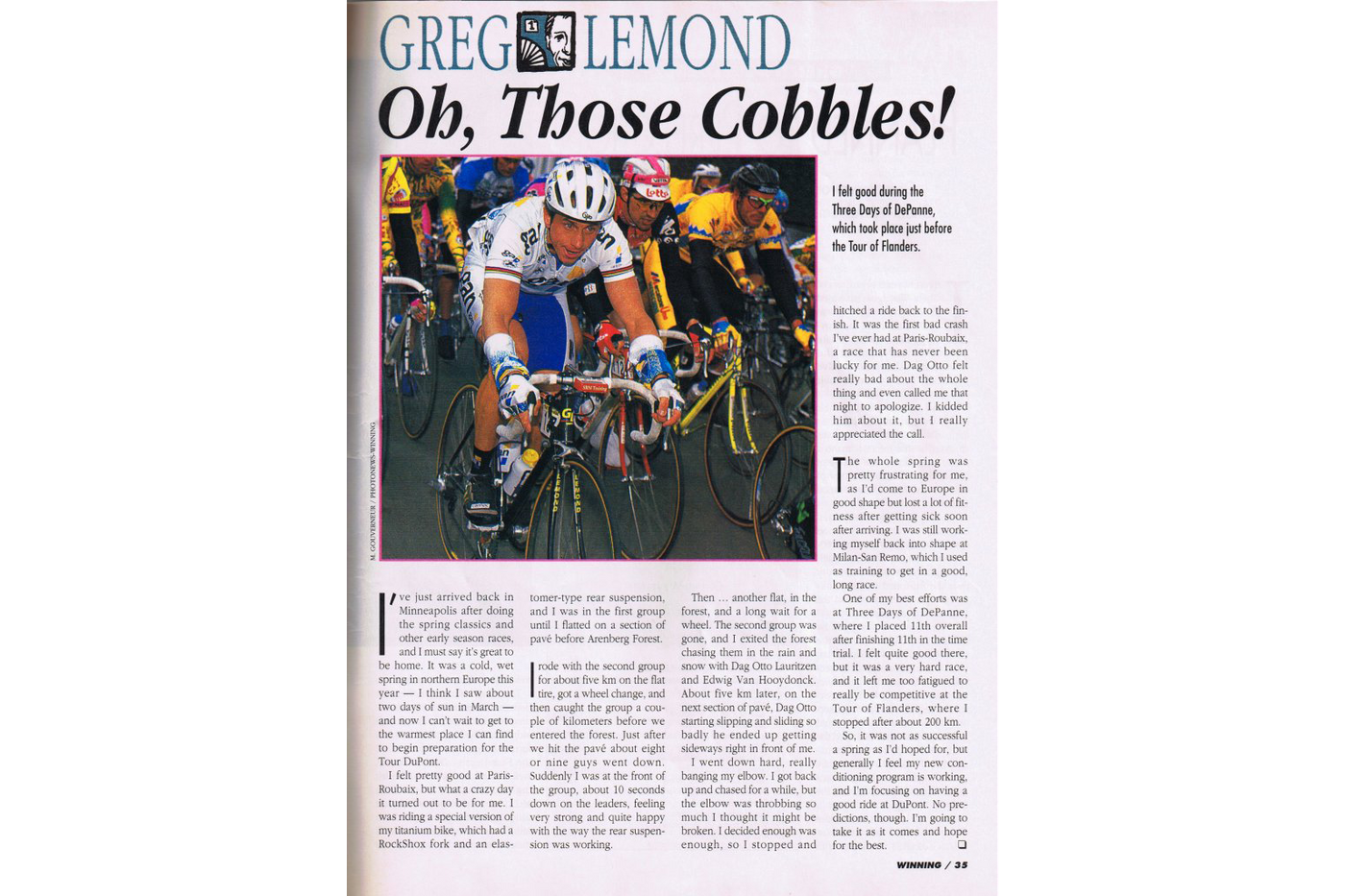 Greg Lemond riding a Zap-equipped, RockShox Ruby fork, and a SRM Power meter in 1994. You trying to win Unbound, Greg?

Time is a Flat Circle with 28 spokes and 50mm Tires

Years ago, I used to dive head-first into our Merckx Mondays posts with a friend Jeremy who runs a fun little website called Tears for Gears. We’d exchange emails, meet up at swap meets and discuss vintage cycling. I was a big nerd in that world for a while, still figuring out what space I’d inhabit mentally back then. I was drawn to the bikes of Eddy Merckx and the almighty MX-L tubeset. I was really into the kooky inventions professional teams would come up with for races like the Paris Roubaix. One year, Jeremy brought a team GAN bike, complete with a Ruby fork, to a Brooklyn Bike Jumble back in the day and I was enthralled. 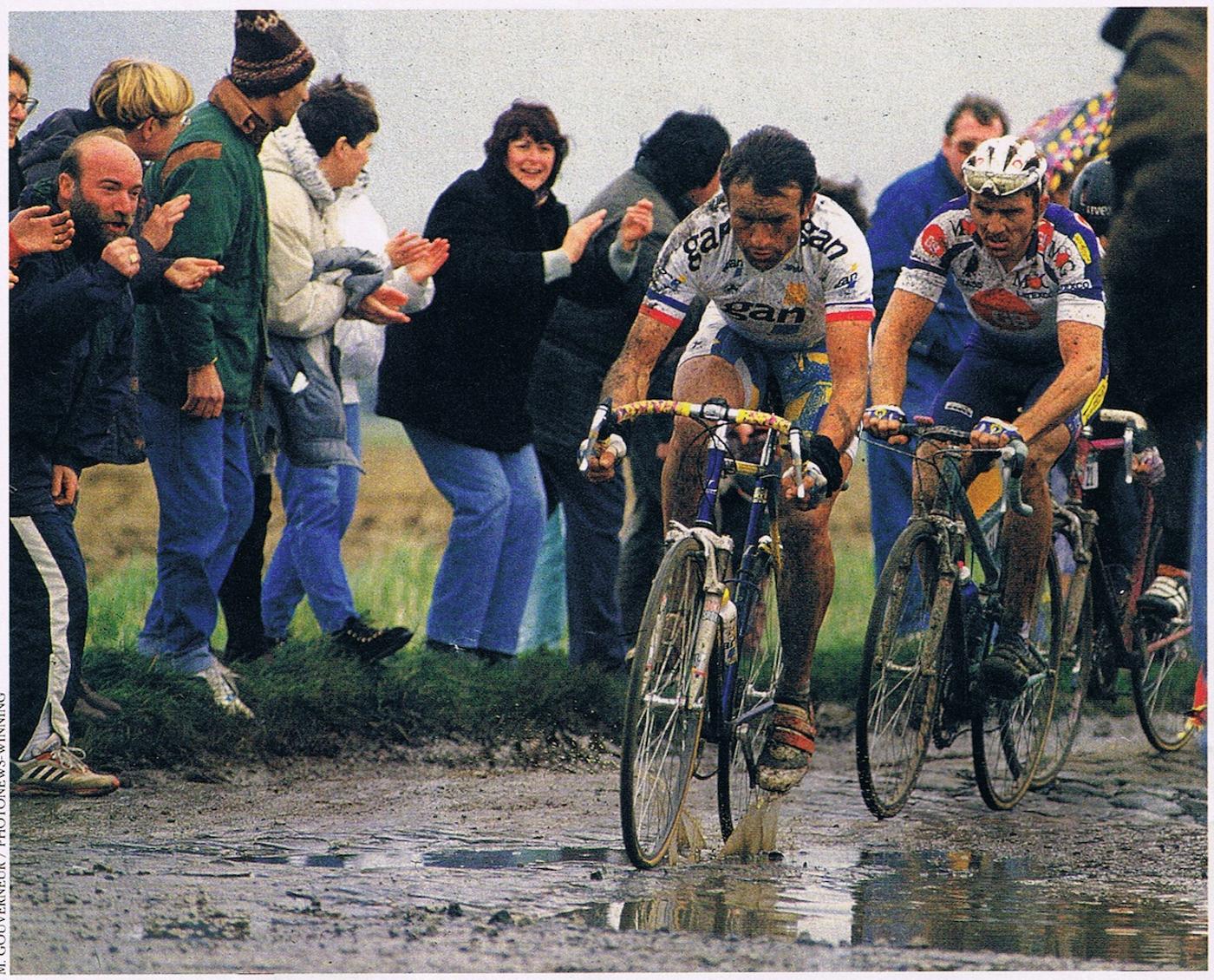 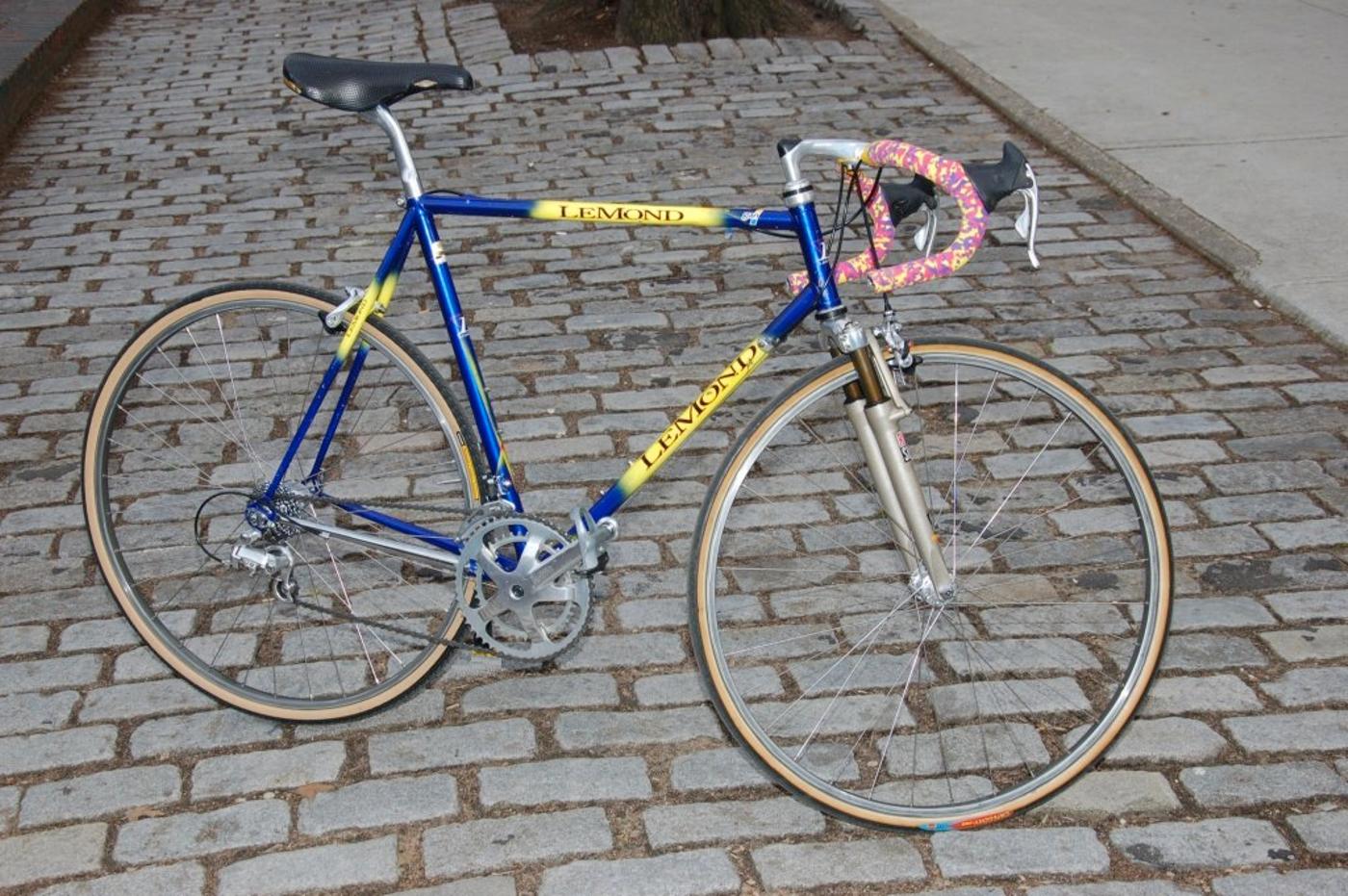 At the time, the vintage craze was high in Brooklyn, the Red Hook Crit had just begun with its fabled cobblestone chicanes, and I remember joking that a suspension fork on a track bike would be fun for the event. It never happened, unfortunately, or fortunately? But the idea was there nonetheless. 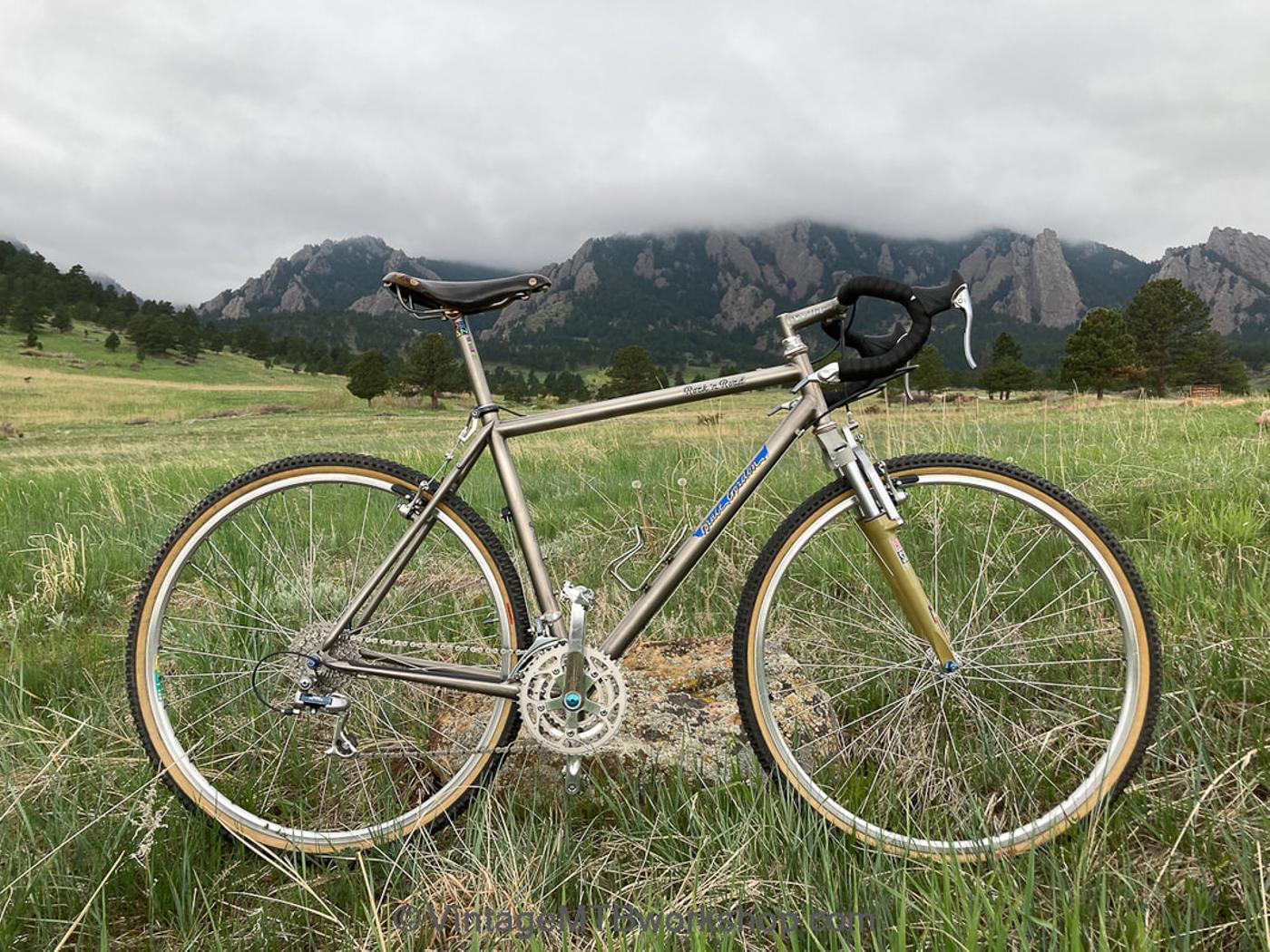 Yet, over a year prior to the Paris Roubaix, Bruce Gordon, of Rock ‘n Road fame, had built a “gravel bike” with a customized RockShox Mag21 fork to fit a 700c wheel. In order to get this to work, Bruce made his own crown. Of all the forks Bruce made, most of the crowns broke, yet Tasshi from Vintage MTB Workshop has a “working” model in his own stable. This bike has a wild story, so I suggest you read it! 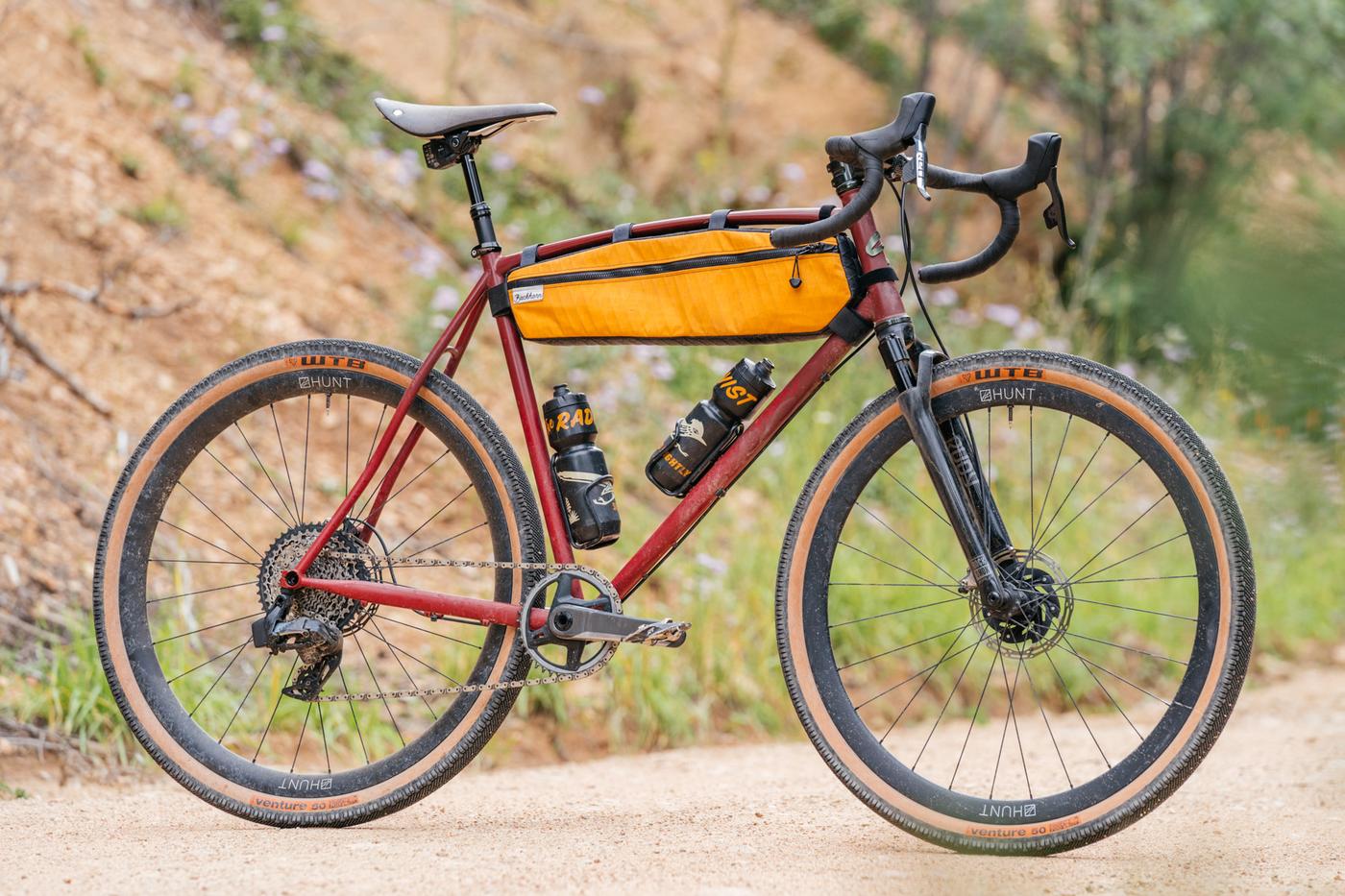 Perhaps you see where all this is going? No, gravel bikes aren’t XC mountain bikes from the ’90s, they’re professional road bikes from the Paris Roubaix and kooky, one-off creations made in a garage by a man who arguably created gravel bikes long before they were called that in the ’90s. Introduction to the Rudy and XPLR

I’ll just go ahead and say this, when RockShox and SRAM approached me to do a project centered around their new gravel fork and gravel groupset, I was a little bummed out to see it being called XPLR. The name ain’t great. It’s been done before by other brands in the same space but that’s how it goes sometimes. I felt like there were other verbs better suited to hold the banner that don’t carry connotations of colonial conquest but I know how it goes within large companies. I don’t hold this choice against them, I just felt like it did the entire line a disservice. I also understand that it is a nuanced world and words carry different meanings for everyone. Yet, I thought about this a lot before agreeing to try the group out. Once I got off my high horse and onto my steel horse though, I was immediately drawn into this group and began to think about how the world “explore” fits into our insatiable desire to follow dotted lines on a map and make big loops in wildlands we personally have never ridden before. It’s hard to remove a word from our vocabulary but this discussion is an important one, in my opinion anyway. 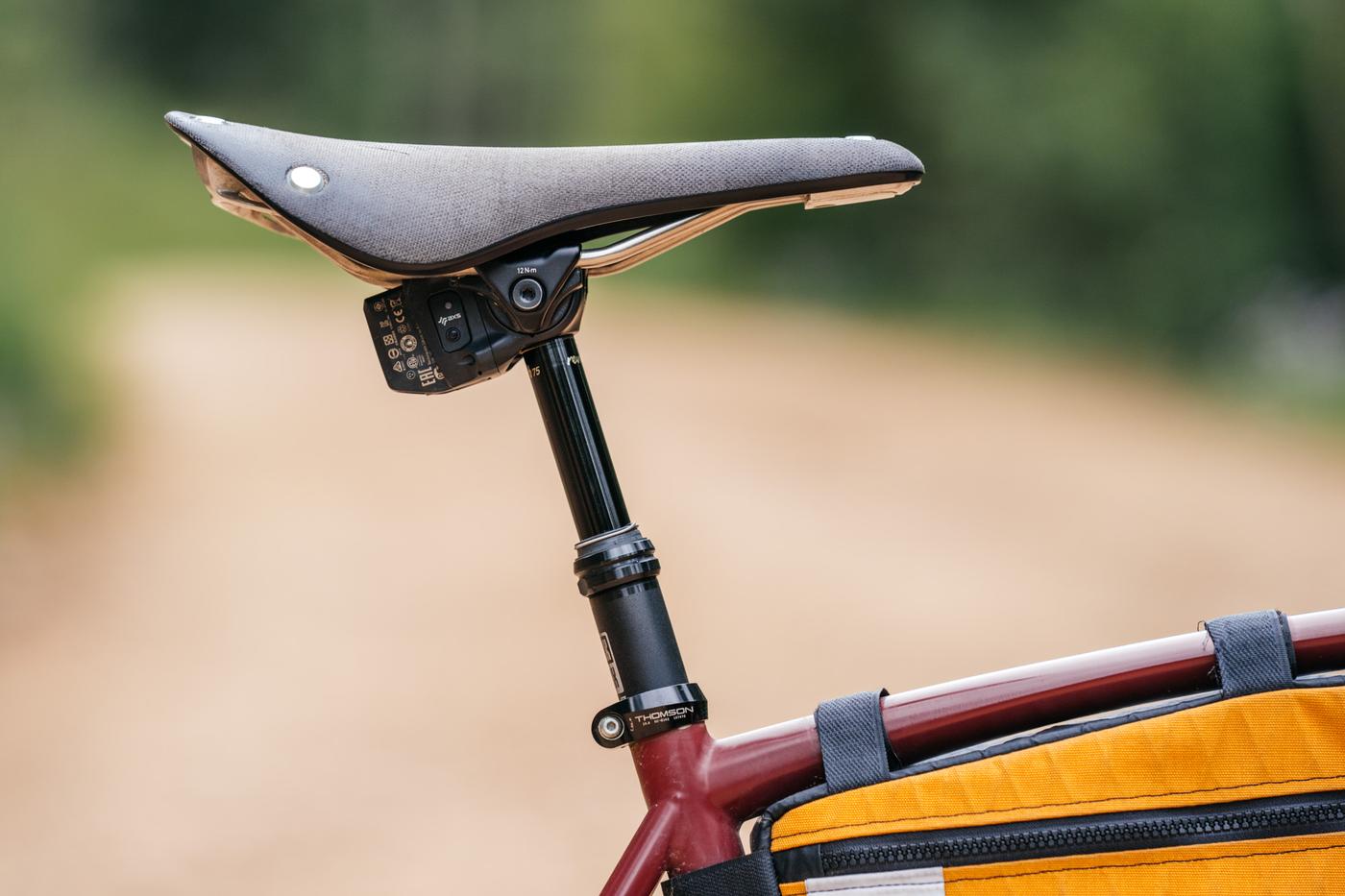 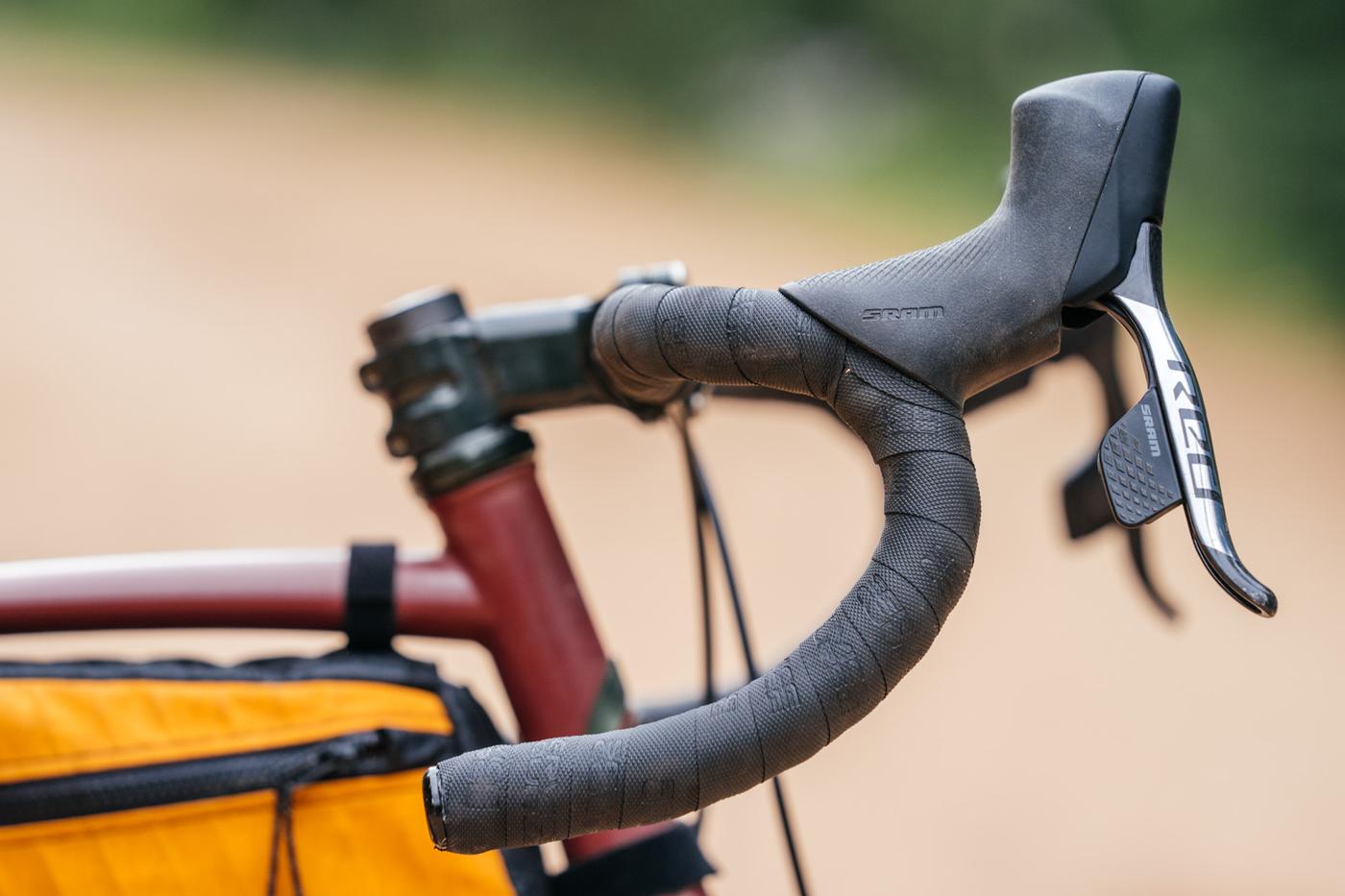 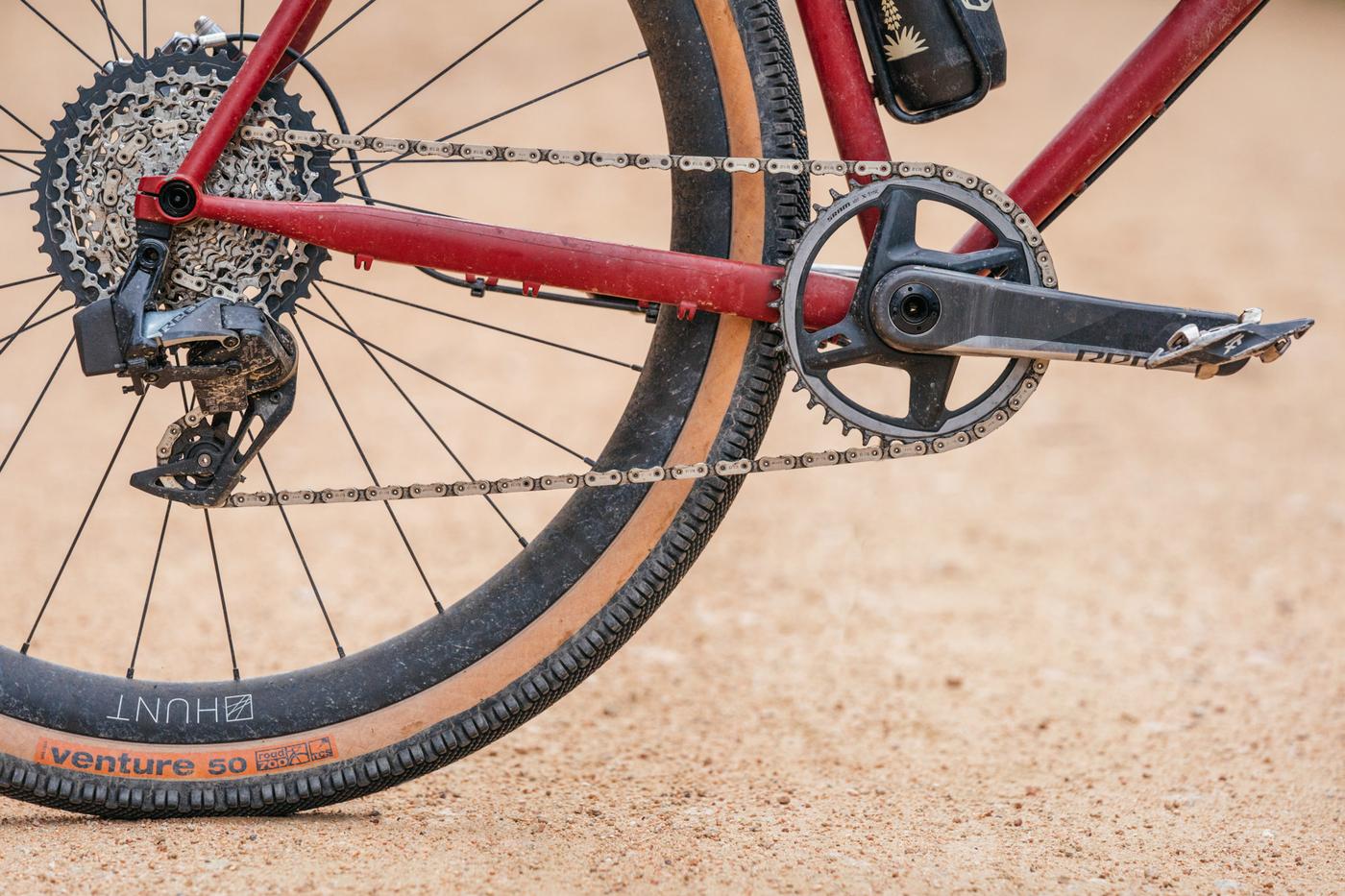 XPLR isn’t just a squishy fork, it’s a whole groupset, spanning three brands; SRAM, RockShox, and Zipp (not pictured). There’s a new cassette, going to 44t with a matching rear derailleur, an AXS 27.2 dropper that also works as a suspension post, a new gravel suspension fork called the Rudy (Ruby was taken, unfortunately), and even ZIPP 3Zero Moto-inspired 101 XPLR wheels for gravel-specific applications. The drivetrain cascades across the RED, Force, and Rival tiers as well, so don’t feel like you’ve got to drop that extra coin on RED everything.

When I learned of all this, I immediately thought how fun the Sklar Gravel would be with this new kit, so check out this fun video we made last week:

When I write these reviews, I try to think about what kinds of concerns or questions people would have and since this is an embargoed release, I can’t exactly ping the readership beforehand like we’ve done before in reviews but I’ve been doing this long enough to have a handle on what some of the questions will be. Here’s my attempt at answering some of your hypothetical concerns…

How Heavy is the fork?

The RockShox Rudy XPLR with an uncut steerer weighs in at 1227g on the nose, versus the ENVE Gravel fork that weighs in at 520g.

What’s the deal with it? How long is the travel? How’s it work? What tire will it fit?

The Rudy uses a Charger Race Day damper and a Solo Air spring to make every millimeter of travel matter. It’s a completely new design, optimized for 30mm or 40mm travel options, with 30mm uppers to give the fork a slender, slimmed-down look and profile. It clears a 50mm 700c tire, has an optional bolt-on fender and comes in black or desert tan, which RockShox calls “Kwiqsand”. The lockout is instantaneous with no float or bob whatsoever.

What’s so special about the 27.2 AXS Dropper?

Well, it’s a dropper post that fits on 27.2 diameter seat tube bikes. That means even your old Lemond road bike from 1994 can run it! This is a long answer, so bear with me. When developing the XPLR dropper, RockShox designed it from the ground up. Due to the small diameter, they couldn’t use the existing AXS design. Instead, the post uses what they’ve dubbed ActiveRide – meaning it has air-only internals, allowing the post to be fully rigid at top-out, yet when you drop the post down a hair, it turns into a suspension post to soften those annoying washboard corrugations.

In the world of AXS, cassette sizes run the gamut. For road, AXS cassettes come in a 24t up to a the higher-range 36t for gravel, and AXS Eagle MTB kits go to 52t. When SRAM developed XPLR, they wanted to hit the middle ground between a fast, speedy road bike and a full-on MTB gear range, landing on a 44t cassette that isn’t as low-range as MTB options but better than a road cassette. If you want your gravel bike to have a 52t cassette, no worries, you aren’t beholden to the XPLR cassette and rear mech.

How reliable is AXS?

Speaking from experience with not only this bike but my Sklar 29+ tourer and my Moots Womble, AXS is as reliable as you are. If you remember to charge the batteries once a month, you’ll be fine. If you take the batteries out of the AXS devices when you drive your car with your bike on a rack (the movement causes the servos to run and drains the batteries on longer trips), then you’ll be fine. I ride with a spare battery in my tool wallet but have only had one instance when my batteries were dead when I went to ride and I hadn’t charged the batteries in almost three months.

How expensive is this dog and pony show? 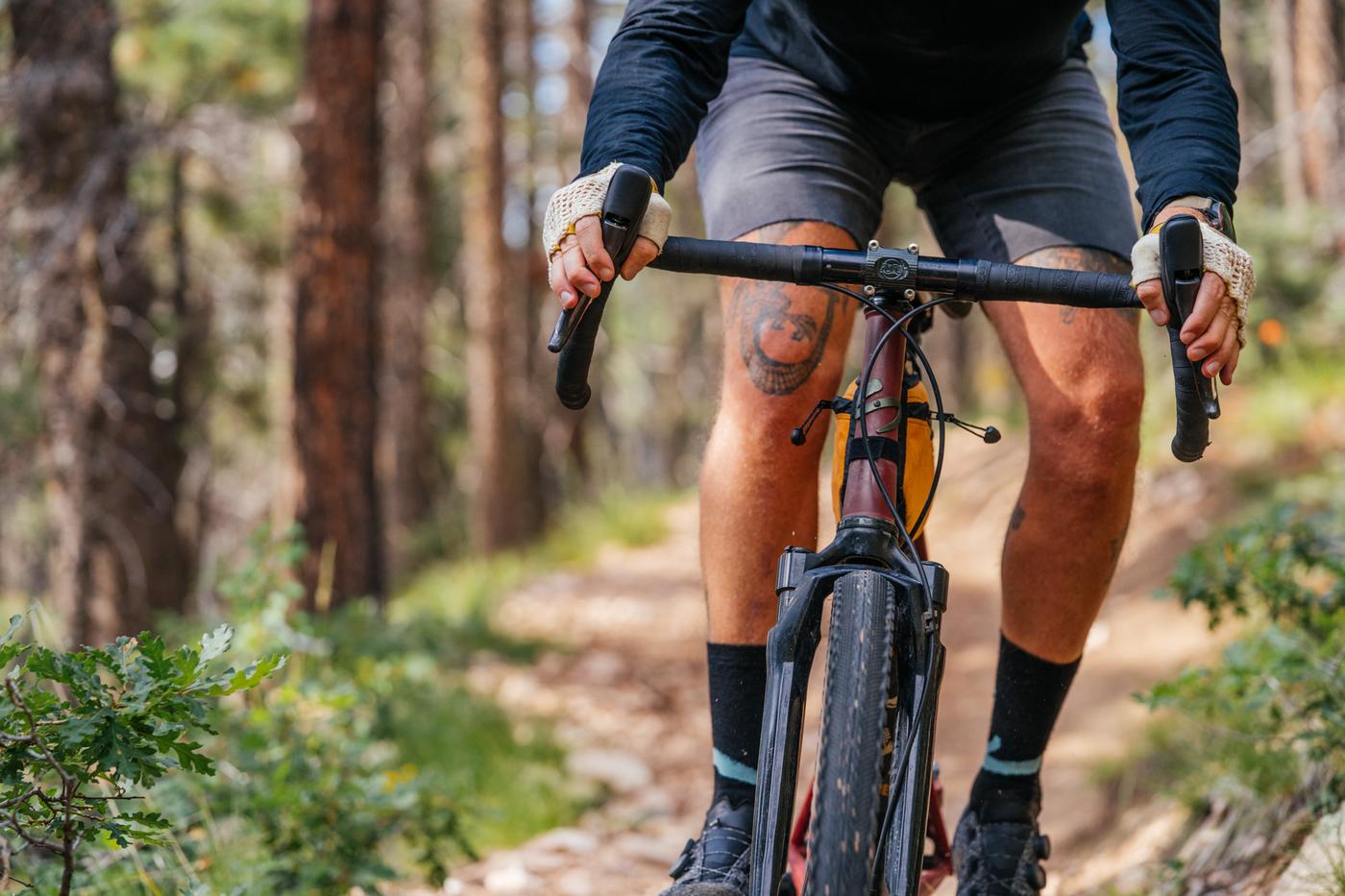 Pricing and Availability on these Items

Please note: SRAM XPLR AXS components will be available in limited quantities in August 2021 with wider availability beginning in September 2021.

Please note: The RockShox Rudy Ultimate XPLR will be available in limited quantities in August 2021 with wider availability beginning in September 2021. Availability will vary by region and channel, check with your local dealer. 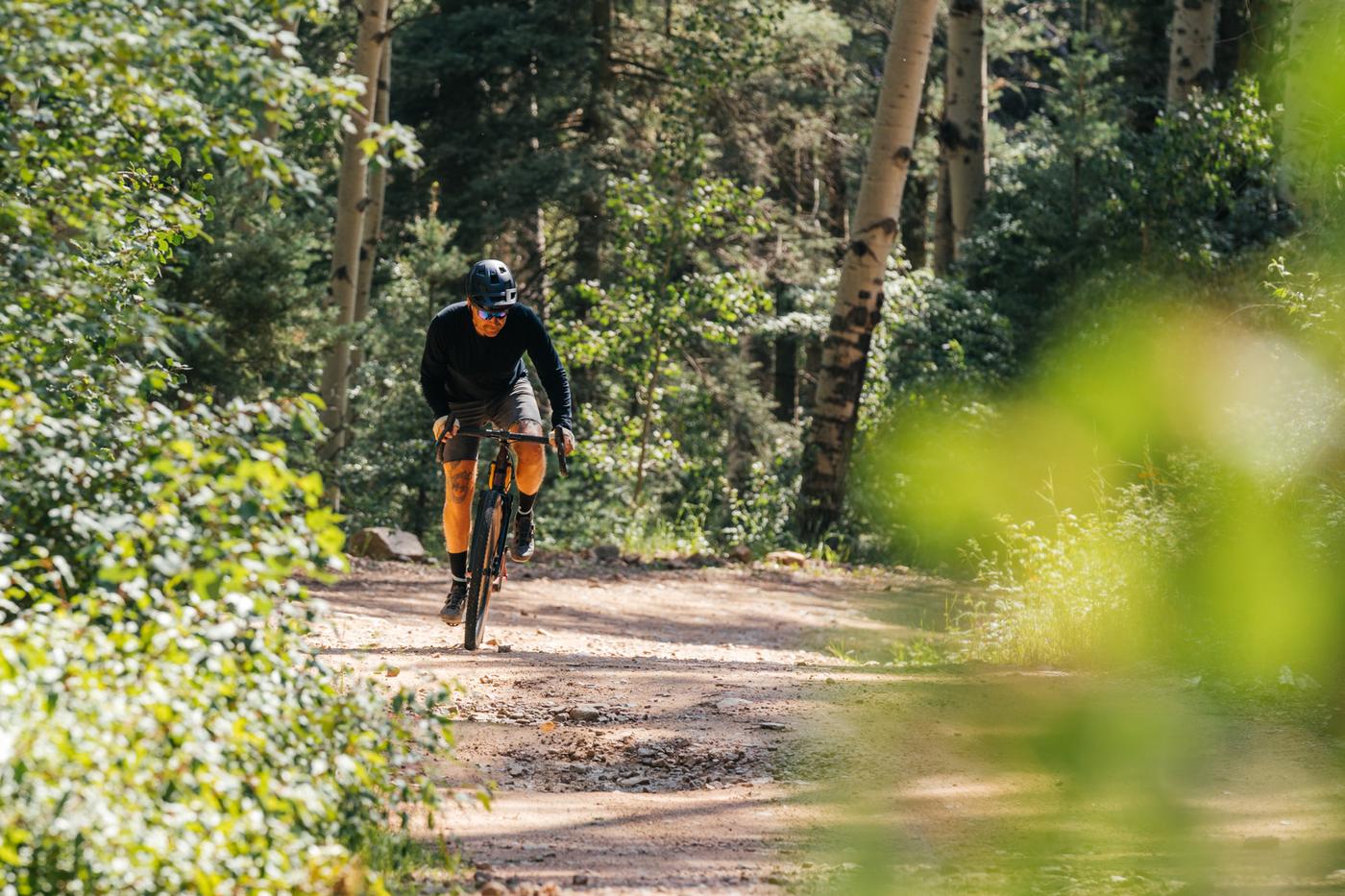 Look, this kit doesn’t turn your bike into a trail-gobbling enduro machine. In my opinion, the Rudy offers so much more than bump absorption on rough roads or trails. Front suspension tracks over rough terrain, helps maintain traction while climbing/descending, and even offers more control when descending on pavement. Especially our chewed up asphalt here in New Mexico.

When combined with the AXS dropper, the Rudy fork transforms a gravel bike into something different. Yes, there’s a weight penalty (and $$$$ penalty) for this kit but if you enjoy riding on rugged 4×4 tracks and singletrack, all on a bike that’s a bit faster to pedal across town, then this kit can hit the mark for you. 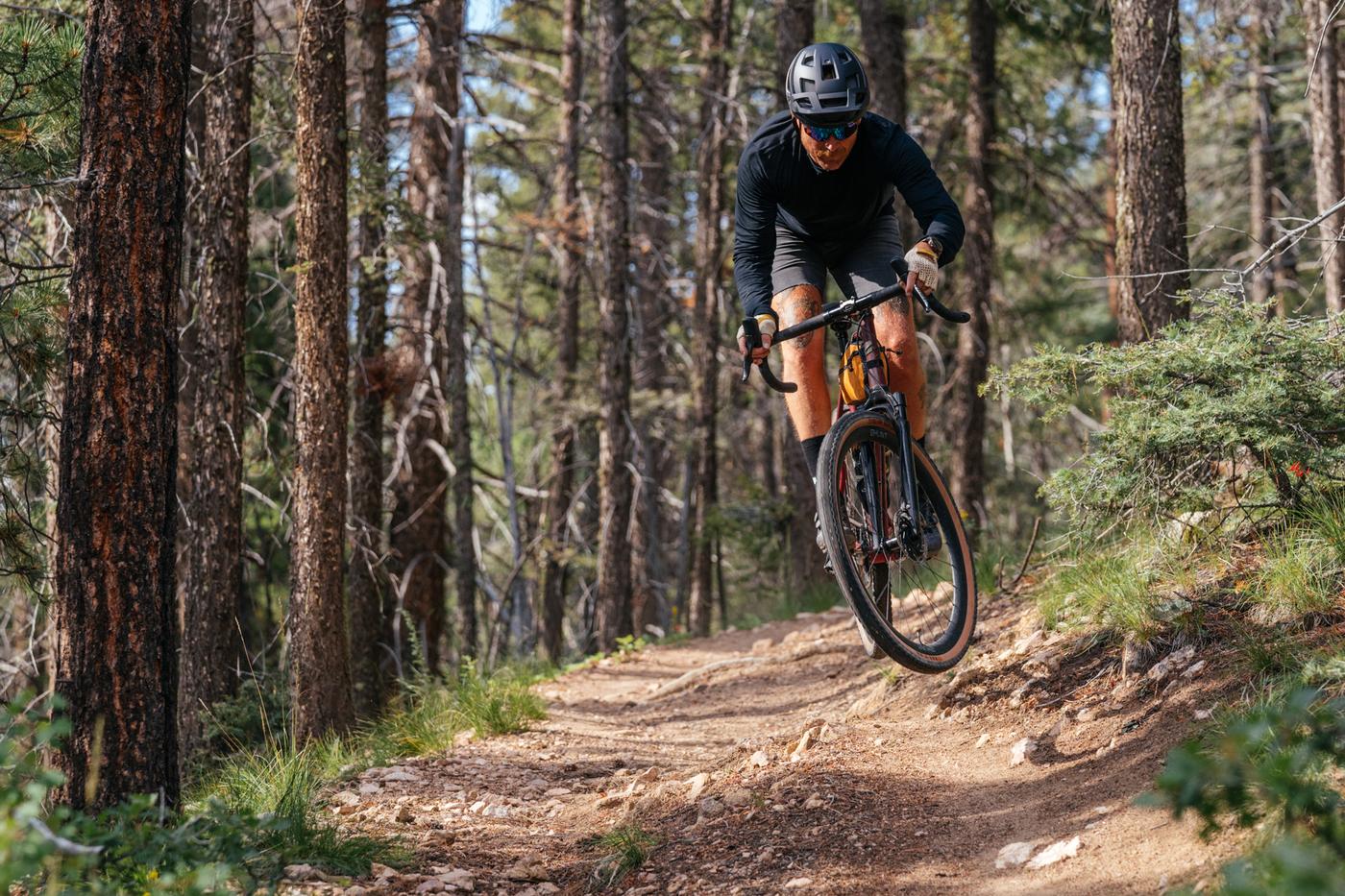 My go-to gravel loop has an option to descend singletrack back to town. It’s a real, “hold onto yer butts” kind of descent on this bike but having ridden it pre-XPLR in its previous build kit and post, I will say it’s gotten to be a lot more fun with a dropper post and a little bit of cushion up front.

Where the Rudy really excels though, is its ability to help the front wheel maintain traction on rougher roads. When you’re out of the saddle climbing up rocky sections, the fork tracks and gives you a bit more contact than a normal rigid fork would supply. Speaking of rigidity, I never lock this fork out. I like the way it dances with you up pavement climbs and it makes it more fun to jib around town on your way towards the dirt roads and trails.

This bike was not a light bike to begin with and the dropper and fork added some weight but the pay off is a completely new riding experience in a sub 30lb package. Is this still a gravel bike? I’d say so. In the same way my rigid 29+ Sklar and my Starling steel full suspension are both mountain bikes. It’s just in a different sub-genre now.

Circling back around to the introduction to this review, in the ’90s, bikes carried the label “ATB” for all-terrain-bicycle and if I’d bestow any label other than gravel bike to this Sklar, that would be a good place to start…

Well, that’s about it. If you have questions, drop them in the comments! I’ll do my best to respond as right now, I’m pedaling high in the mountains of Colorado.