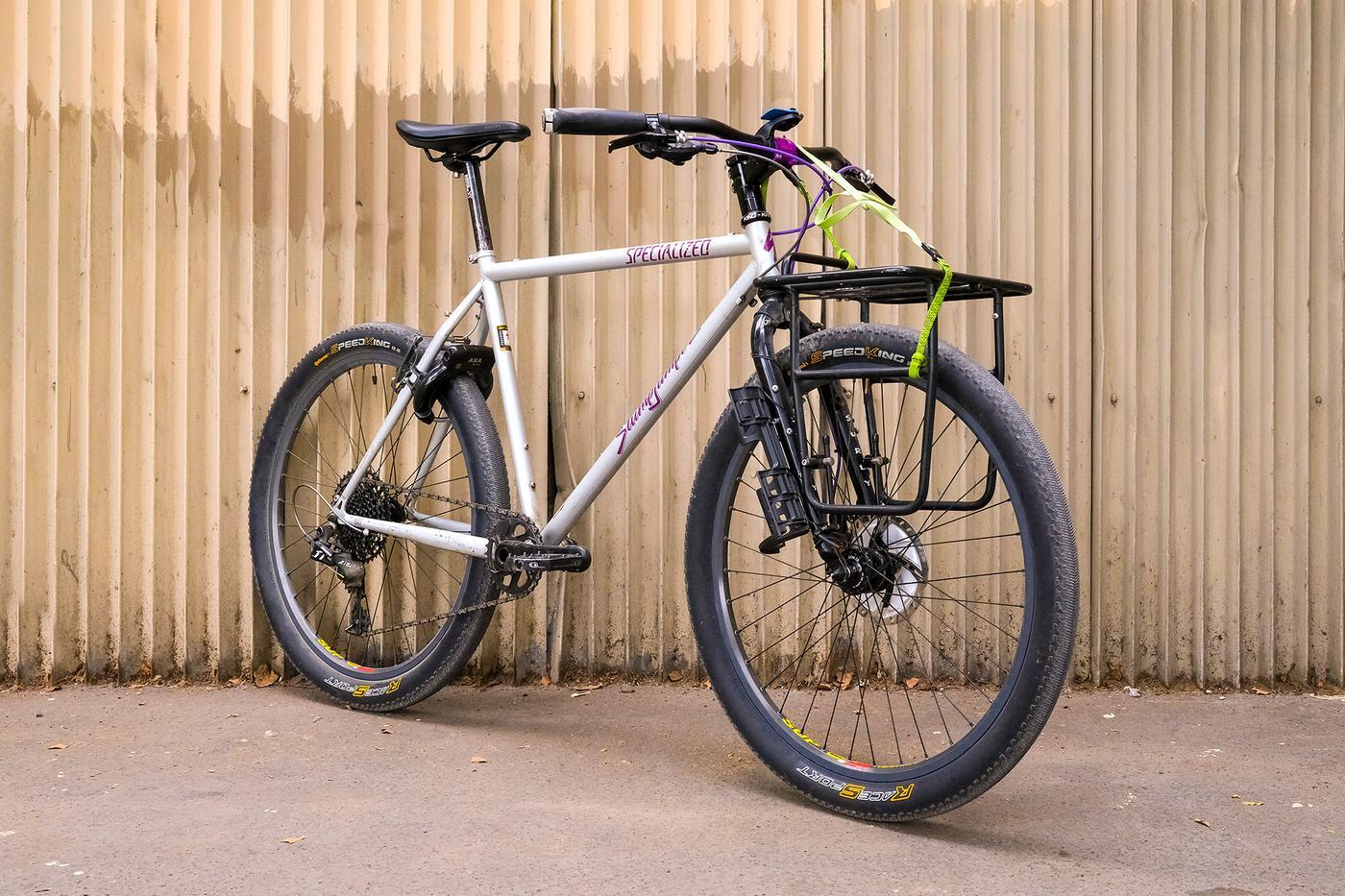 “I bought the Stumpjumper frame without a fork by coincidence as I was buying another Stumpjumper from a collector, I built it up from a lot of parts that I had leftover from my Surly Troll I sold this year and then cycled with it to Paris.” 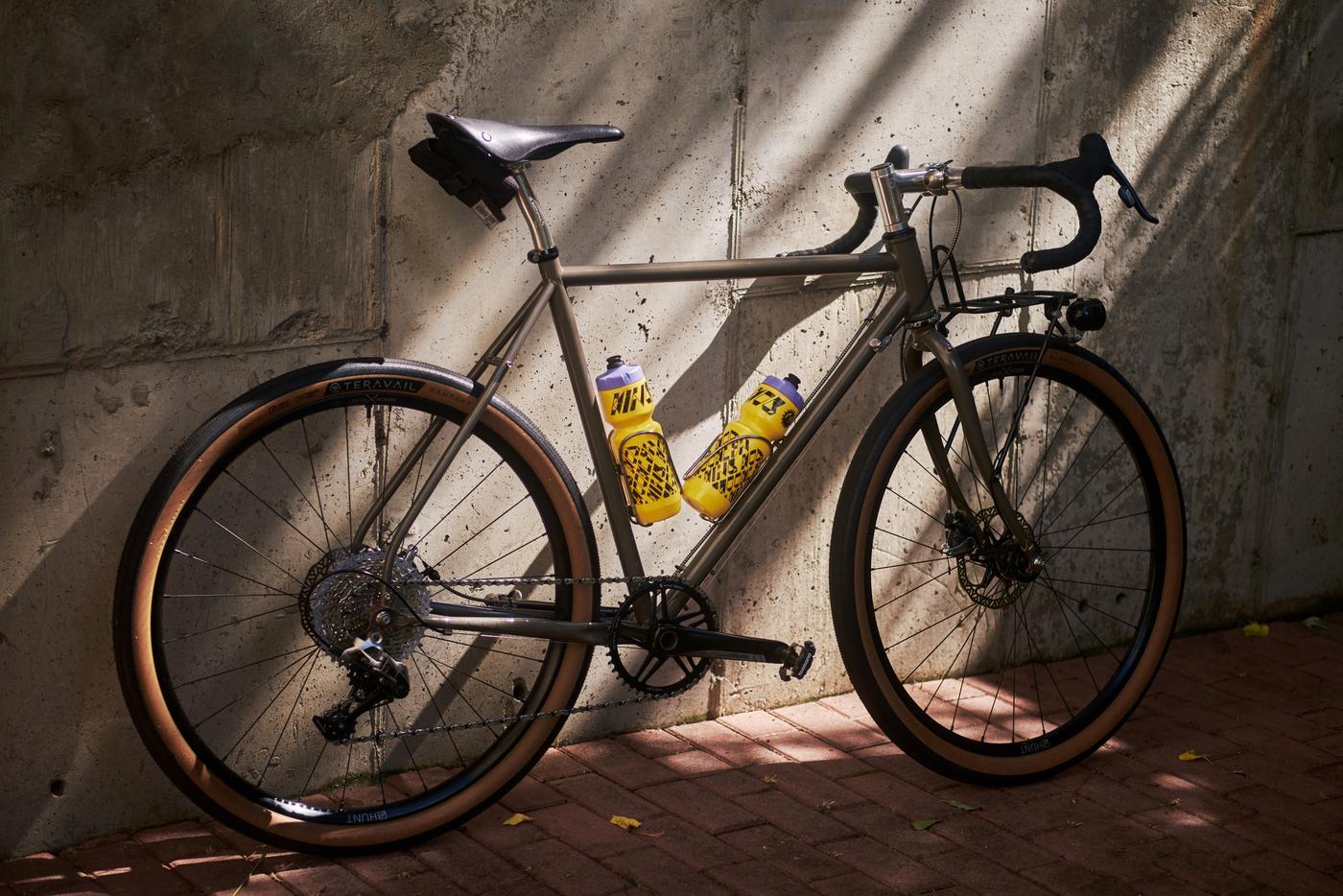 “Given the space constraints of apartments here, my partner and I are relegated to each having a single bicycle. I sold my dedicated road bike in early 2020 to build something with a bit more ‘range’, riding style wise and ended up picking up a Straggler. It was the first new bike I’d ever purchased, and it reinvigorated my love for cycling. I don’t know if I would have survived the lockdown and extended pandemic here in the city if I didn’t have that machine to escape with.” 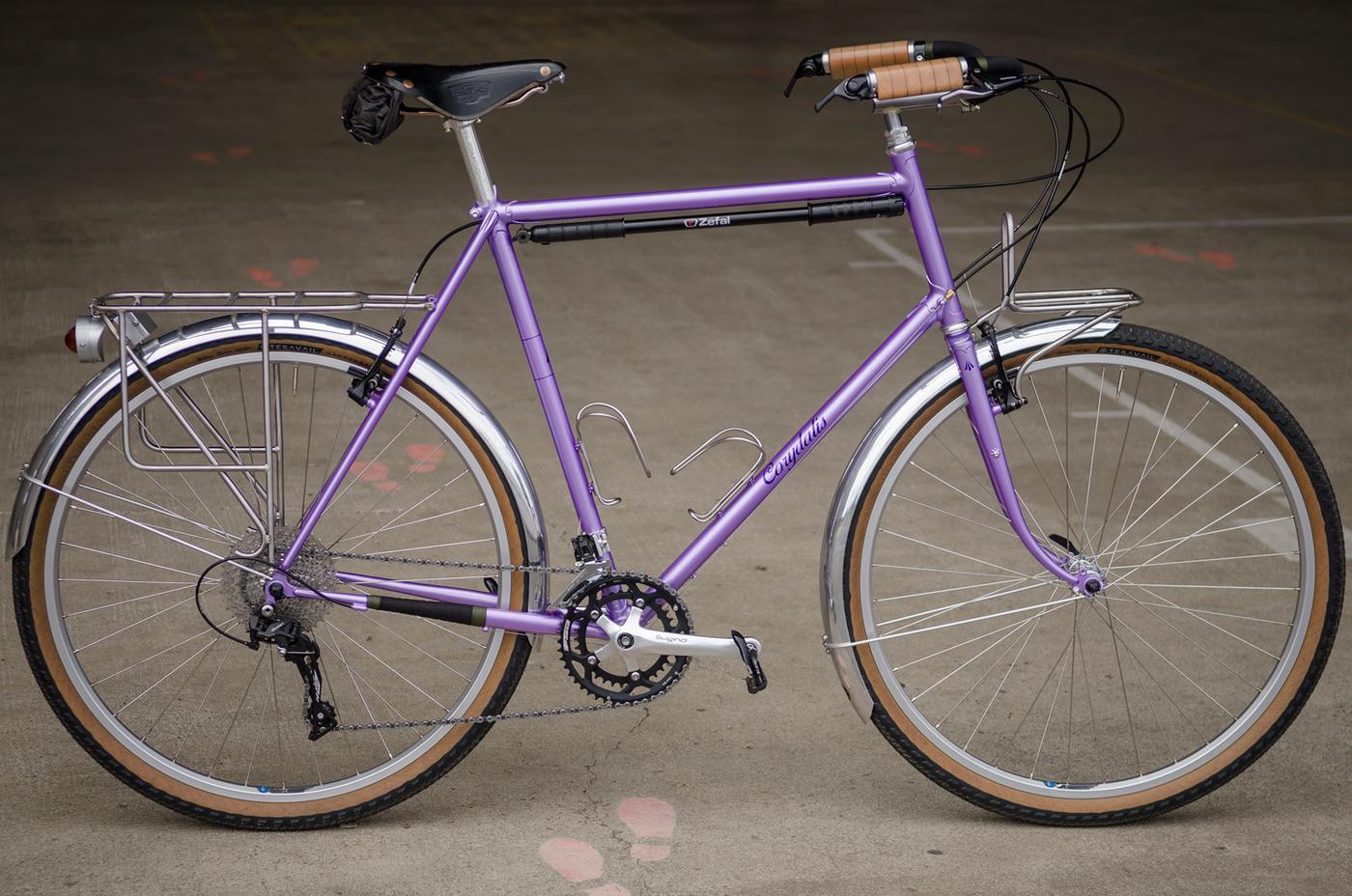 ” I enjoy making my own things from raw materials – from woodworking to metalworking, and everything in between – spanning from skateboards to snowboards, and lamps to tables. I made my first bicycle frame a little over 11 years ago out of my parent’s two-car garage – a Columbus SL tubed road bike with Nashbar carbon fork. The vast majority of the parts for that first frame, from the lugs to the braze-ons, were all pre-made, off-the-shelf parts, and featured very little customization.” 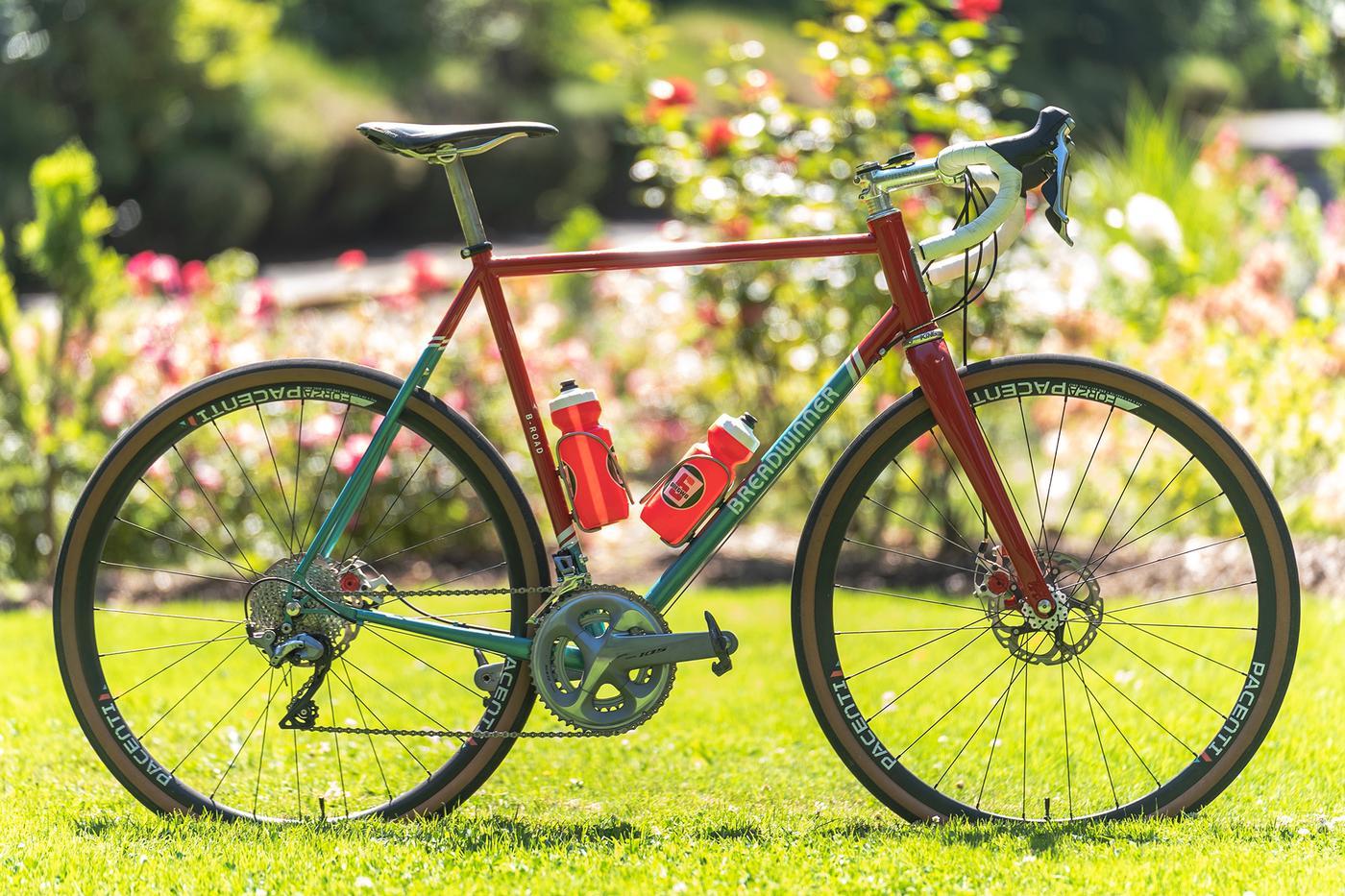 “In the past 6 years, I’ve raced & ridden & toured on this beauty in Louisiana, North and South Dakota, Minnesota, and Wisconsin. By the end of last season, the frame was showing some beauty marks, including a little surface rust under the downtube so I sent it back to Breadwinner early this year for a repaint. Rather than a straight redux of the white/baby blue, I knew I wanted something fresh. I grew up racing BMX, then graduated to mountain biking. Back then road bikes simply meant “ten speeds” and held no allure. However, like many, I was intrigued by John Tomac’s drop-bar mountain bikes, and stoked to see images of North Dakota native Andy Hampsten in the snow on the Gavia in the ’88 Giro.” 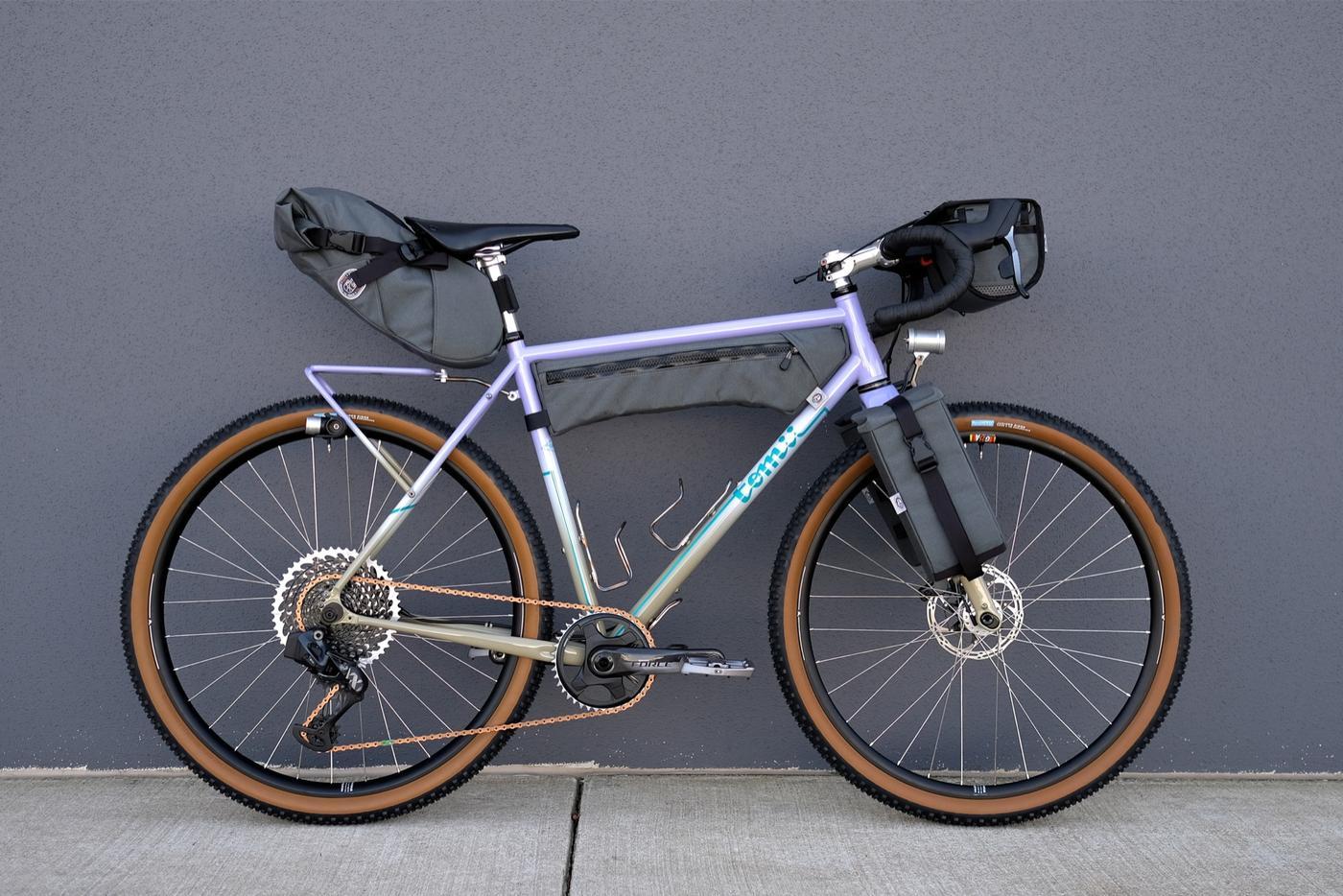 “I cannot express the immense joy that the custom Fat Canvas style bike has brought to me. It has importantly allowed me to reconnect with the cycling community in South Texas. This bike does it all: I use my Tomii Cycles bike to explore the gravel scene in and around Austin/South Texas, throw my hand at crit laps on the Driveway Series and ride with the Eastside Movement Company and Breakfast Club bike groups.” 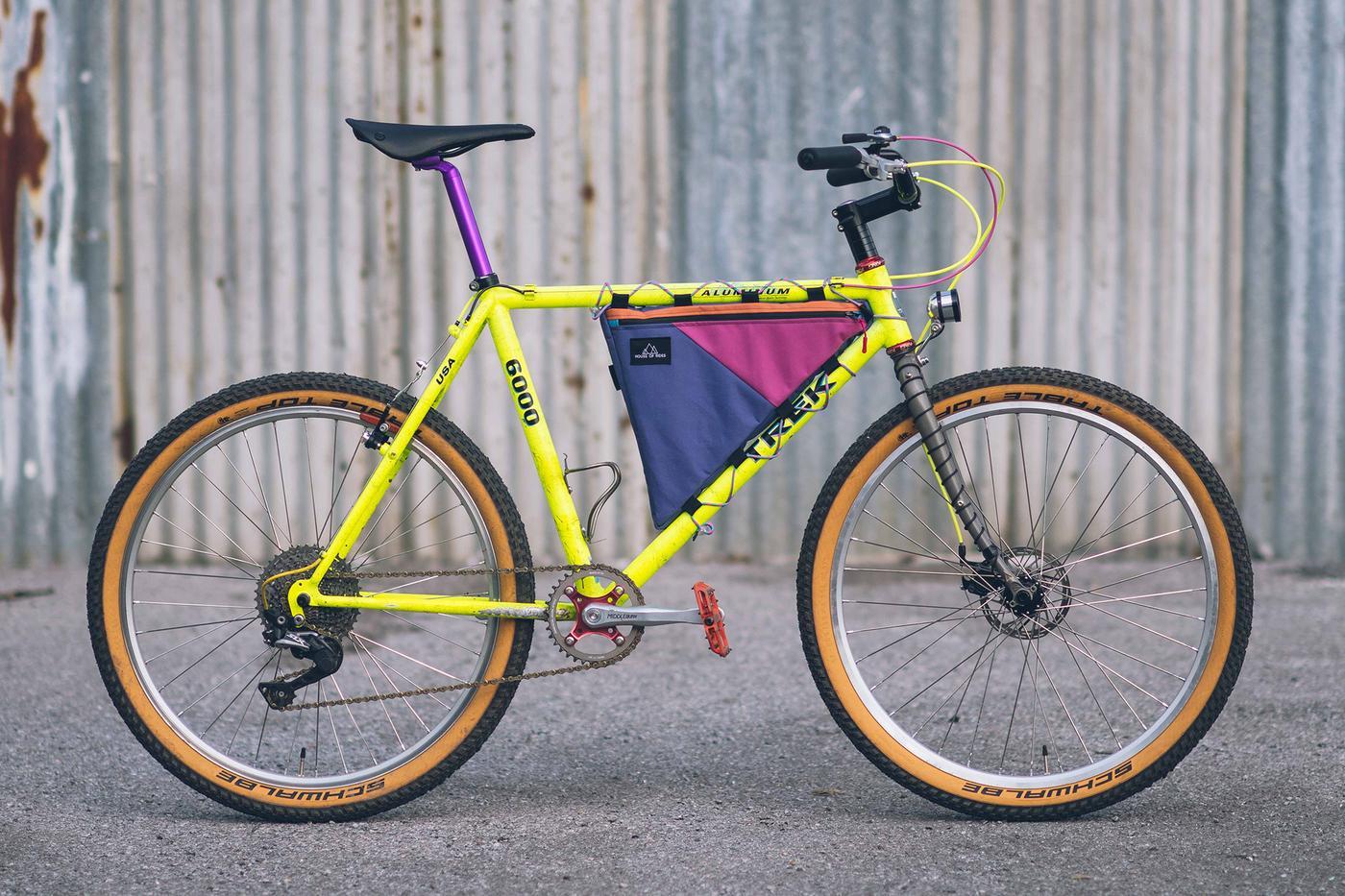 “It’s a 1991 Trek 6000 frame that is a little beaten up, but is super appealing to me visually. I’ve developed a total obsession with the ’80s and ’90s aesthetic in the last year or so..this is a total representation of my bike brain having a massive colour fart!” 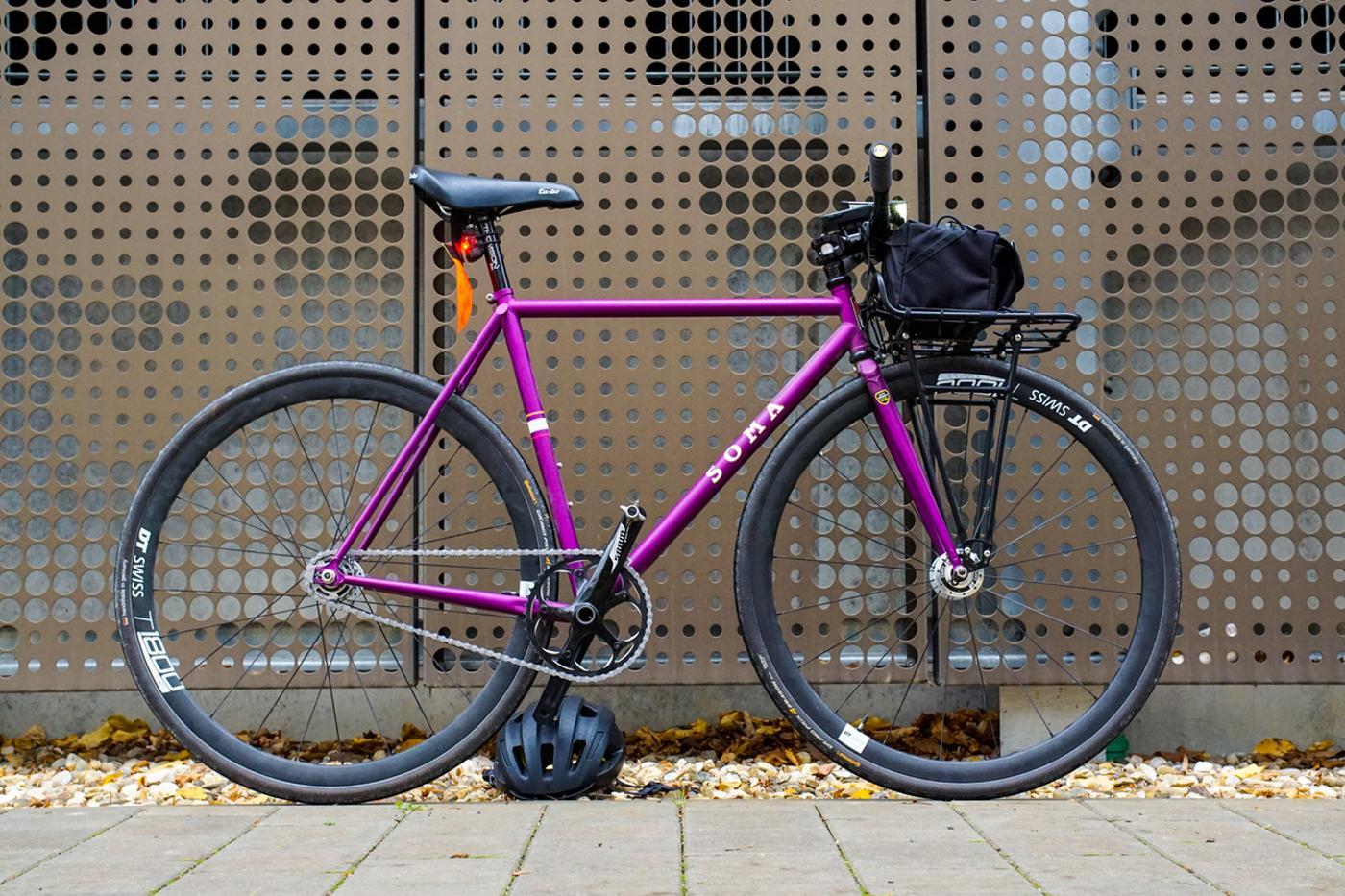 “After building up an old Raleigh Eclipse Reynolds 501 as my daily bike in 2013 and buying an On One Pickenflick in 2019 which is now my favorite and hopefully eternal Gravelbike (only the frame, fork, and the Sram Force 1 groupset from the original bike is still existing and they sold it as a Cyclocrossbike, but the 47mm Terravail Rutland say definitely it´s not cyclocross anymore), I wanted to build up a new bike which allows me to ride a familiy-friendly and useful fun bike :-D” 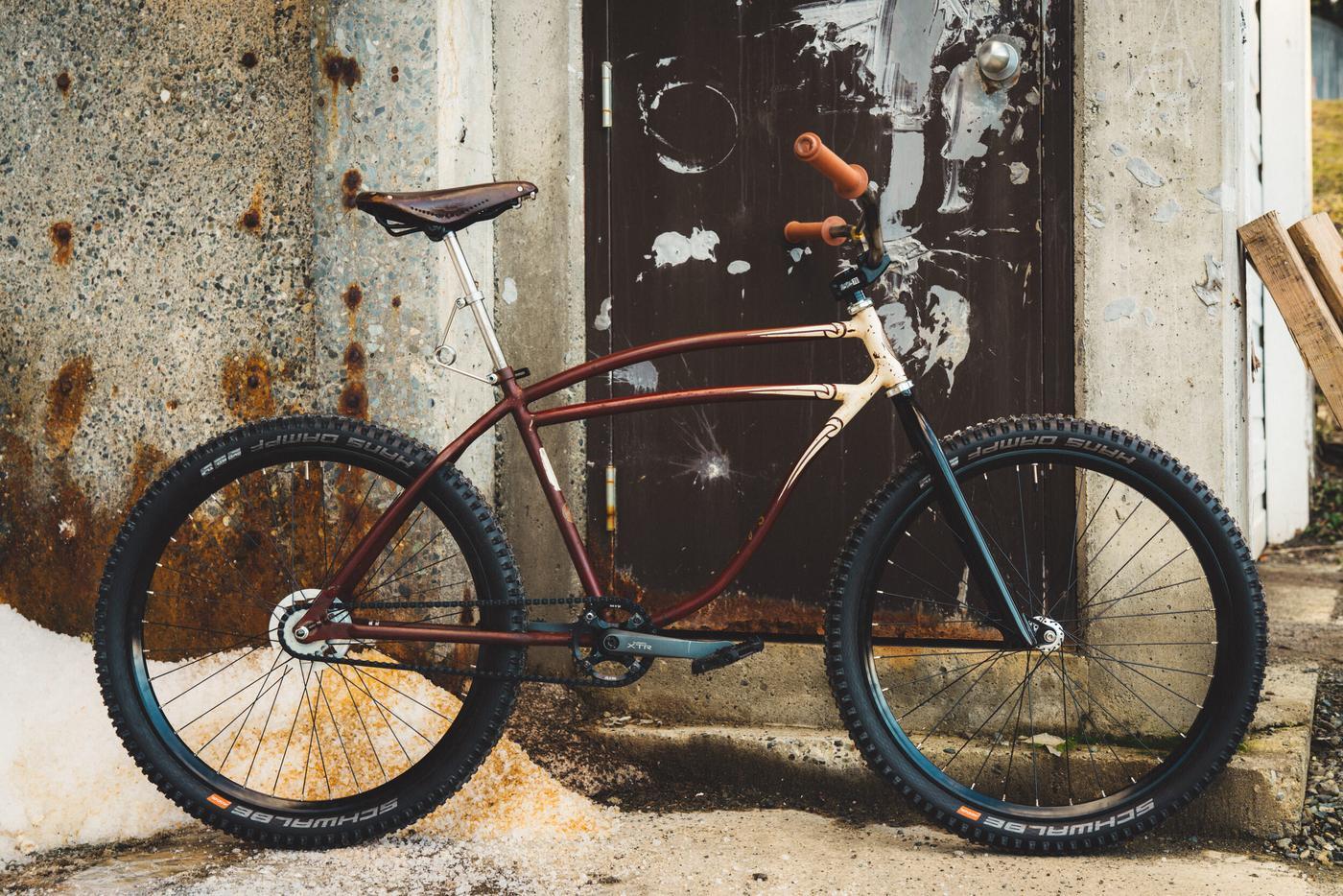 “My custom frame obsession veered into the world of Klunkers which in turn brought on a history lesson of the birth of mountain biking. When people first started riding off-road, there were no official bikes designed to do so. In the 1970’s, the pioneers of the sport (including Tom Ritchey, Joe Breeze, and Gary Fisher—to name a few) started buying up classic cruisers from the 1940’s and modifying them with various moto parts and hacked together upgrades. They then took to the hills of Marin county where they bombed fire roads and all kinds of other shenanigans. These 1940’s klunker bikes became some of the first “mountain bikes” and under these legendary pilots, the MTB was born.” 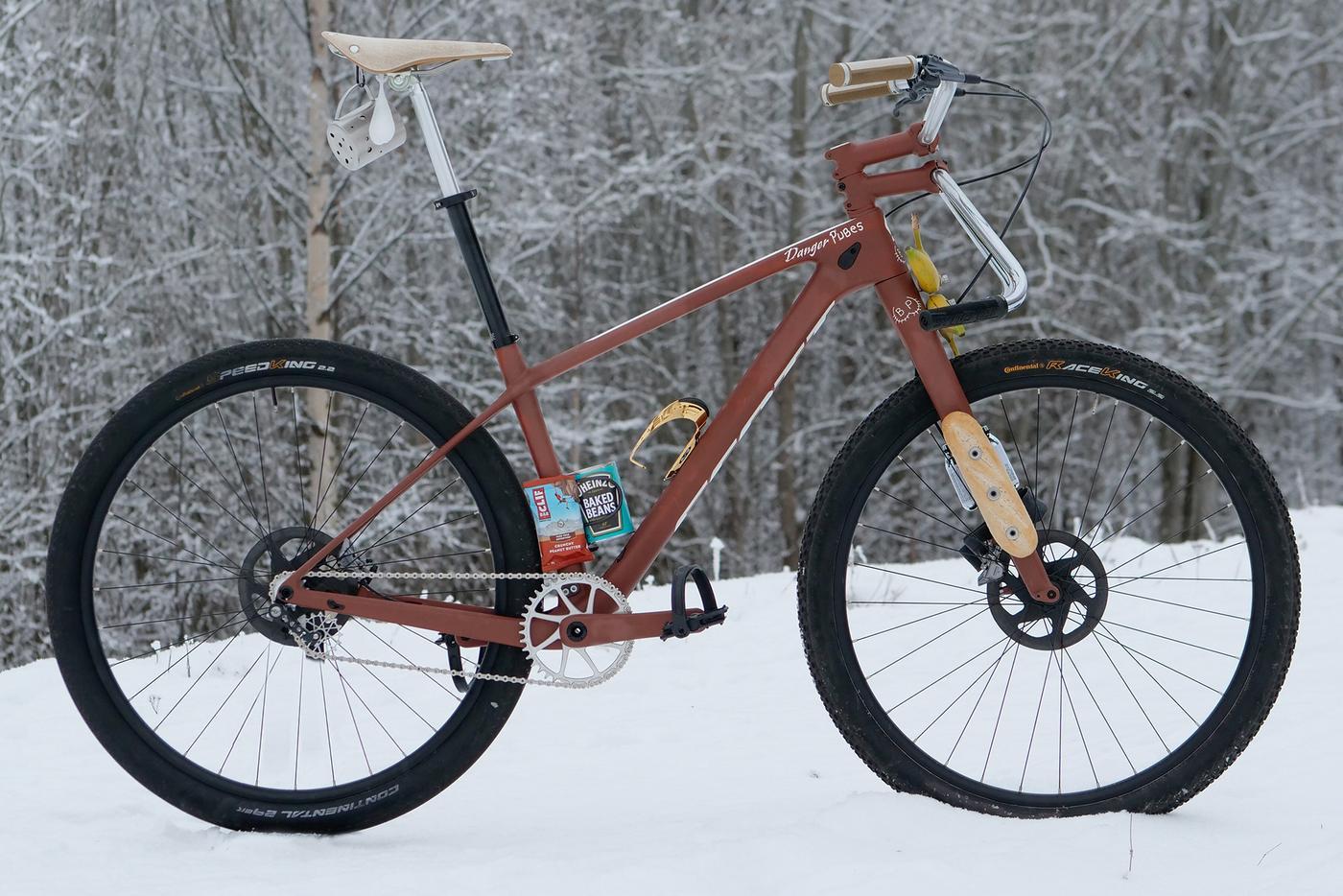 “When @dangerholm aka Gustav aka Dangerous Dave reached out to me to discuss a collaboration, I was sure he meant to send the message to someone else.  In fact, I still think that.  But before he could realize his mistake, he had already agreed to a laundry list of terrible ideas for what would eventually be dubbed DangerPubes.” 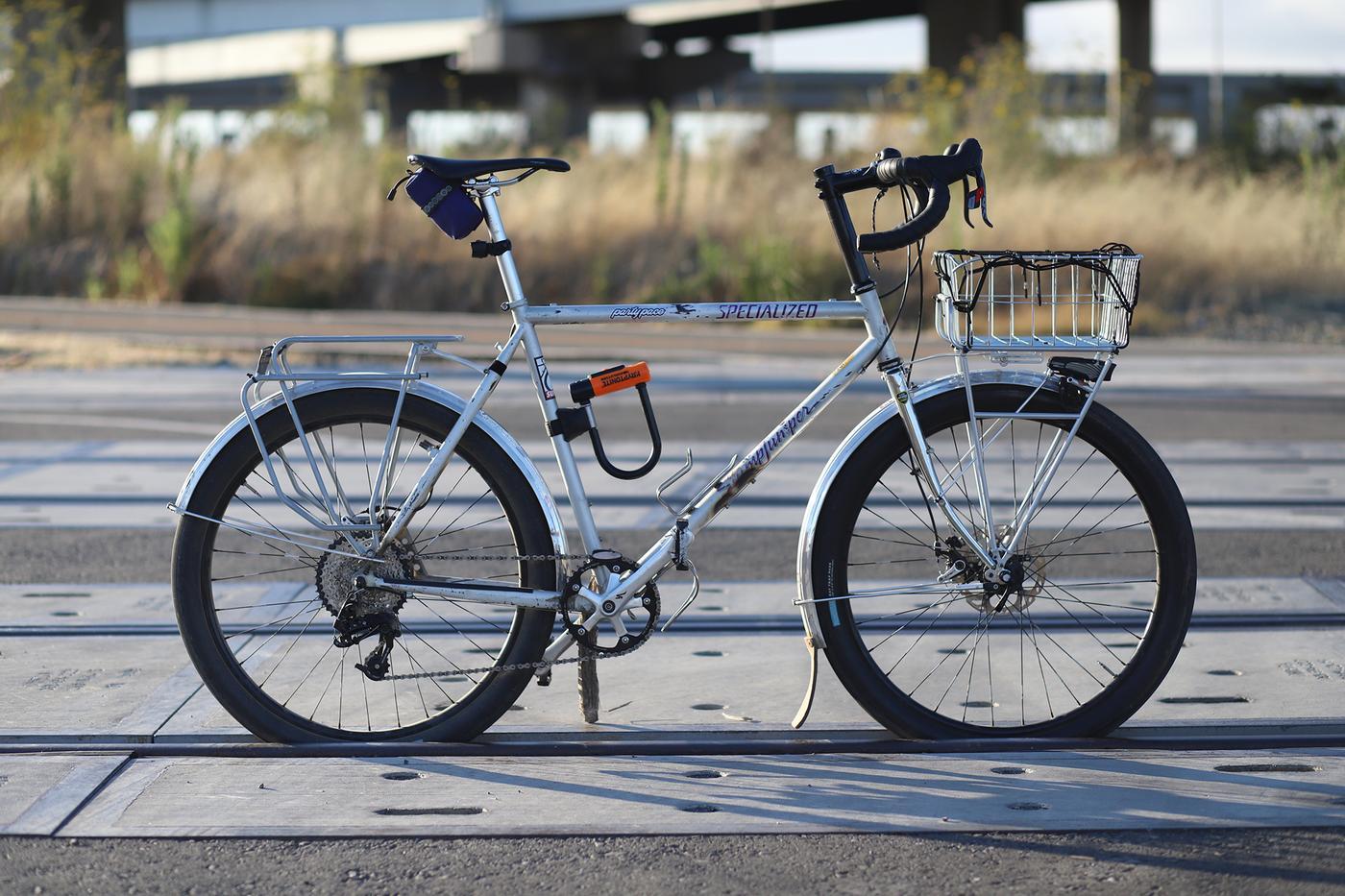 “I scored the frame on eBay for $70. I initially tried a suspension-corrected steel fork but found that it rode too upright. So I swapped it out for Soma’s awesome low-trail fork, which made the top tube level and still clears those Compass Rat Trap Pass tires. Oakland framebuilder Erik Billings added the disc brake tab in the back, as well as a couple of extra bottle cage mounts under the downtube. The rad Pass and Stow front rack is by Matt Feeney, another local framebuilder and maker of no-nonsense steel components. The rack is a perfect match for this frame, with its oversized tubes and long-wheelbase just begging to be loaded up.”

We’d like to thank each and every one of you who has submitted Readers’ Rides to us! We have a big backlog but don’t let that stop you from sending us your bike. Feel free to submit your bike, listing details, components, and other information. You can also include a portrait of yourself with your bike and your Instagram account! Please, shoot landscape-orientation photos, not portrait. Thanks!