For many, a New Year means time for reflection, and time for prospectives. For cyclists, this often includes planning out a build for a planned ride or perhaps updating your favorite bike with new gear. Perhaps that’s the motivation for many of you to visit this site. For us at the Radavist, we look at all the data from the past year’s content and begin to understand more what you, the readers, love to see here on the site.

Every bicycle on this list should come as no surprise. It was one of the most difficult selections in the history of this site, as almost all of these Beautiful Bicycles delivered similar metrics. We pulled these from the archives based on traffic, social media chatter and commentary. They’re displayed in no particular order. Omitted are bicycle reviews and completely bone stock production models – like the Jim Merz Sequoia and All-City Cosmic Stallion.

Thrown in, making it a baker’s dozen, is our top 2017 NAHBS pick as well. Without further adieu, here’ the Lucky 13 Beautiful Bicycles of 2017! 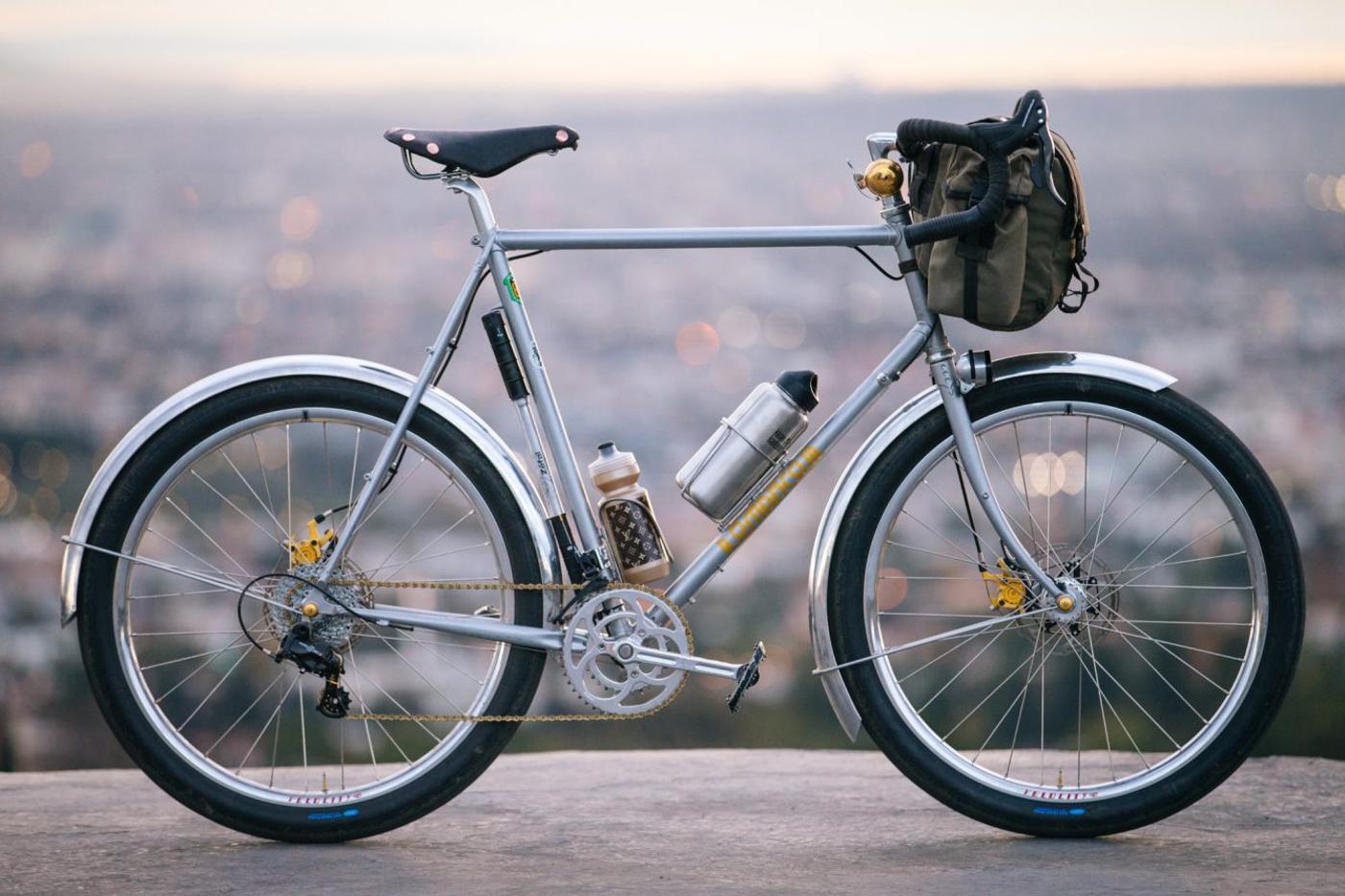 Benedict’s a crowd pleaser and his Crust Bikes ROMANCEÜR kicked off the New Year, last year, with a bang. 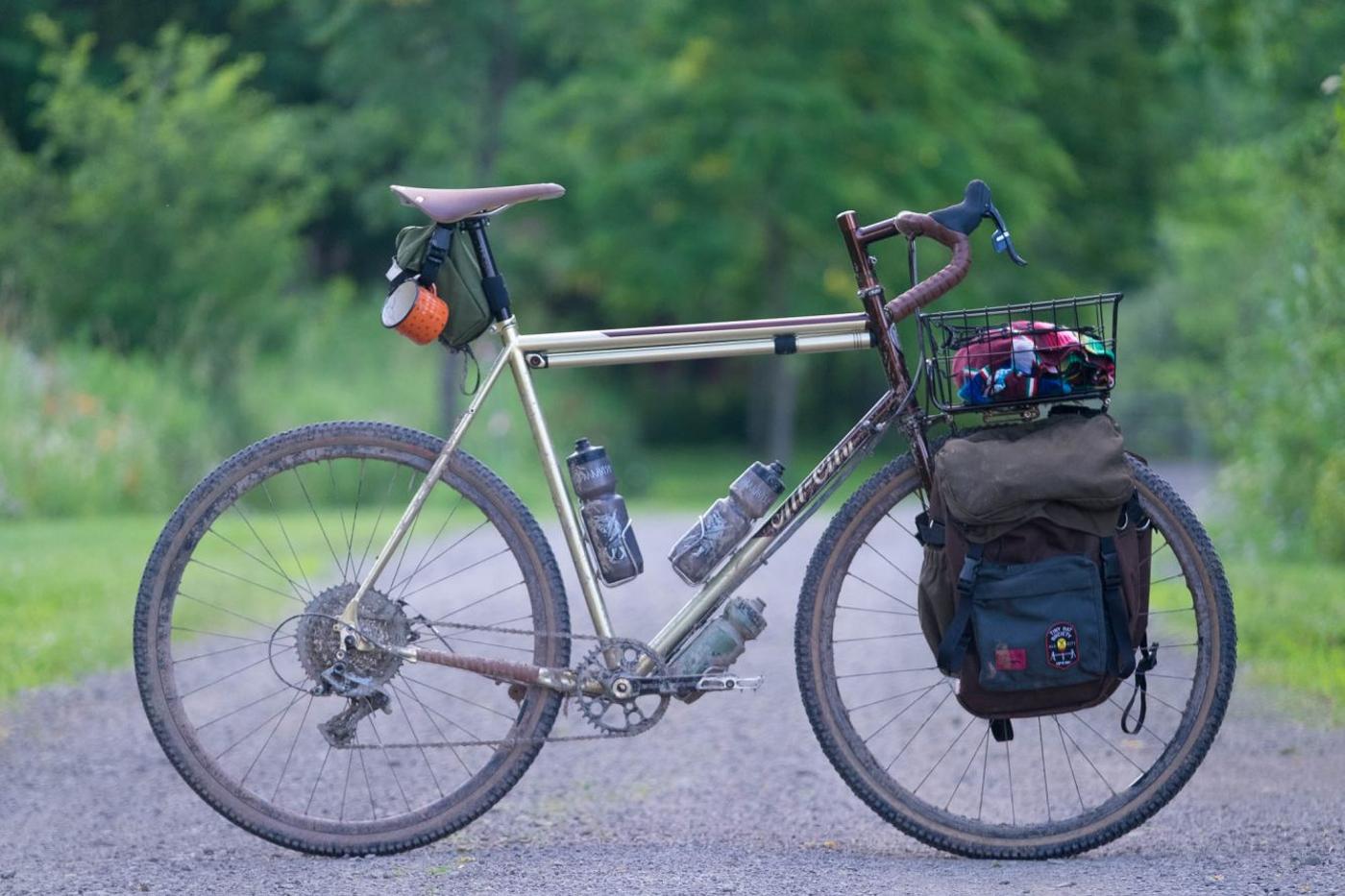 Jarrod’s All-City Spacehorse was one of the most comprehensive semi-custom rigs to grace this website in 2017. He had it custom painted andMaestro Frameworks even added a few accoutrements to tie the build together. 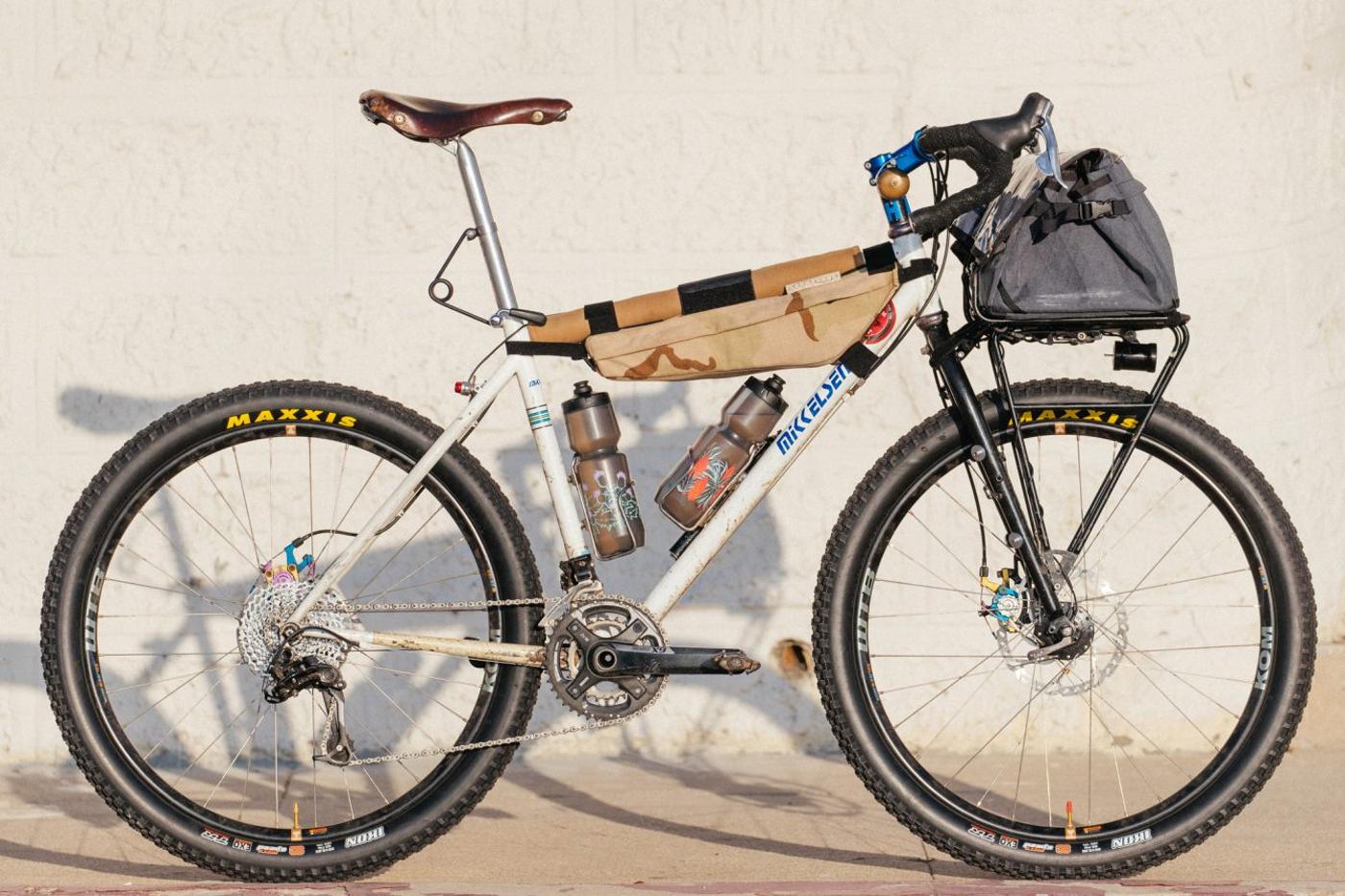 How a “maker” builds their personal bike says a lot about how their mind works. For Kyle from Outer Shell, a bag manufacturer in the San Francisco Bay Area, that means go with time-proven staples and splurge on the important places. Kyle’s Mikkelsen is unique, to say the least, but every moment, every bolt, every component has been thought out, down to the cantilever arm, machined to hold his Sinewave Beacon light and Hite Rite dropper.

This bike began its life as a MTB, which then Kyle used as a platform for an all-rounder, town bike and tourer. After ditching the clapped suspension fork for a rigid Surly fork, he used Rival Shifters, mated with an XO front derailleur and a 2x mtb crank to supply crisp shifting on his drop bars. Mounted on the Pass and Stow rack is a prototype Outer Shell rack bag, which Kyle just finished testing on the Stagecoach 400 route. 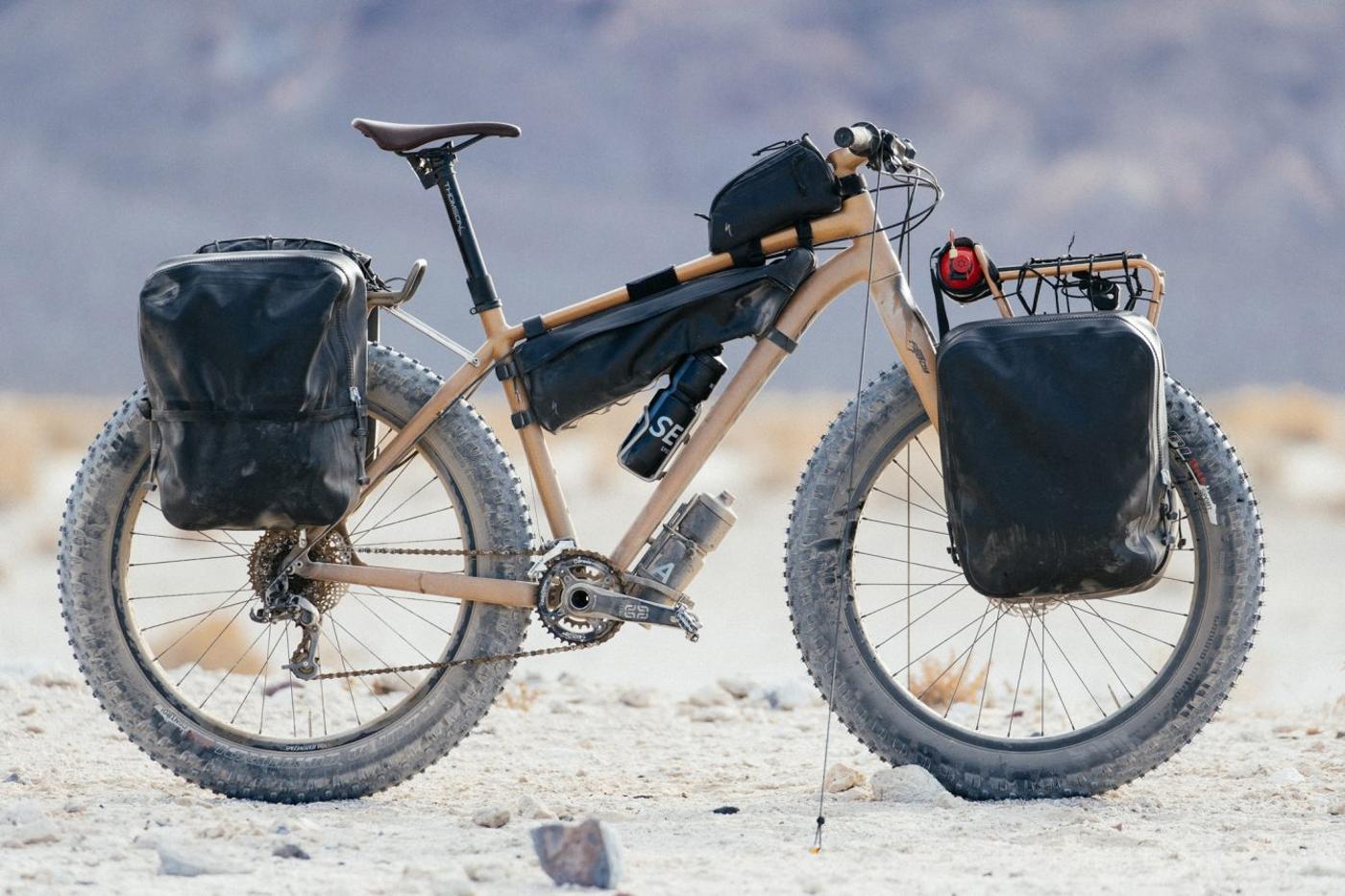 Erik worked from a baseline Fatboy. An aluminum frame with a carbon fork, to which he affixed a Surly front rack to by using resin-impregnated carbon fiber, wrapped in overlapping patterns to make the attachment itself even stronger than the fork. To this rack, he ran two waterproof panniers, a small cutting board – more on that later… On the rear, he used a similar rack, with more panniers. That left the frame pack and top tube bag for snacks and other necessities.

Stan is the organizer of the Karoobaix and the Tour of Ara, both races explore the vast Karoo desert outside of Cape Town. For South Africans, there are enough mountain bike races, but no dedicated “gravel” races, where dropbar exclusivity looks to separate these races from other, XC MTB-oriented stage races like the Cape Epic.

This bike was made by a South Africa builder named Mercer Bikes. Stan wanted an all-road bike, complete with rear rack mounts, clearance for big tires and a beautiful custom rack, which utilizes the face plate drilling of the Thomson stem. Stan then modified a bag he found online to fit on this race. While the rack is one of the most unique of its kind I’ve ever seen, by far, my favorite detail is the most low-fi, the amazing hand painted decoration by local artist Black Koki.

Gunnar Cycles has had some pretty tricked-out bikes featured here on the Radavist over the years, but Jay’s bike holds a special place in my heart. First, you need an introduction to Jay. He’s worked at Topanga Creek Outpost for a few years now, and in his spare time spends hours upon hours exploring the neighboring State and National Parks as part of the Unpredict Your Wednesday outings. Jay is a lover of nature and the magic herb our Mother produces here in California. He’s a smiling soul with love and stoke always present.

Jay’s bike has that special something that stops people in their tracks and requires further visual inquiry. In a world of disc-brake dominated bikes, Jay’s is a Paul Cantilever-equipped machine, with clearance for a 40mm tire and a relaxed road geometry. If it had provisions for racks, it could even pass for a lightweight tourer. That hasn’t stopped him from strapping bikepacking bags on it in the past, however.

“Cameron is known as a framebuilder who makes frames that RIDE really really good. The man obsesses about the differences a degree or a millimeter can make in the way a bike rides, and cumulatively his frames are intuitive and natural to ride, with no bullshit cable routing or parts rubbing. They are “riders”, not “show bikes”, so visually the frames can be a bit boring to look at if you like eye candy. But for the hard riders who put more value on practicality and the no-frills execution of durability; the simple, purposeful, and subtle innovation looks even better after the patina of 5 years of abuse with zero problems.

What I’m saying here, is that I asked a dude who doesn’t give a shit about what a bike looks like, only what it rides like, to make me a bike that looks cool. Somehow I talked him into it.”

Nicholas‘ bike is a prime example of just how rad these bikes are. He built his with a 1x setup, Paul Mini Motos and it’s ready for shreddin’.

The 70’s were the automotive paint design heyday, ATMO anyway. Earth tones and bright hues intersected along cars, vans and trucks via a network of chevrons and stripes. While many manufacturers embraced these trends, it was the niche hobby market who took it to the next level. A whole culture emerged with vans donning intricate designs, long before #VanLife, yet it was the off-road culture that has always piqued my interest, most notably the baja bugs and trucks. Jeremy from Stinner Frameworkshas always had an affinity for the early 70’s Baja Bug paint designs, ultimately these became the inspiration for this two-wheeled off-road machine.

I shoot a lot of road bikes and these days, it’s very rare you see one without a 44mm or tapered head tube. Whereas most people that want a steel frame with oversized tubes, Jaybe from Team Too Late wanted something more classic, something that would dance with him as he climbs and descend like a race bike from the 90’s. He spent a lot of time browsing NAHBS galleries, looking at various framebuilders and was attracted to the work of David Kirk, the Bozeman, Montana builder known for his impeccable fillet and lugged frames.

Jaybe didn’t want your typical, straight-tubed frame however. He requested curvy stays and the result is one of the most beautiful road frames I’ve ever photographed. Built with Chris King’s 40th-anniversary olive drab hubs and Campy Record 11, Jaybe’s David Kirk is sure to perform and look damn good while riding in the hills and mountains of Los Angeles.

David from Kirk Frameworks will be at the 2017 NAHBS in Salt Lake City, Utah and personally, I can’t wait to see what he brings with him.

Where do I even begin here? Kyle from Golden Saddle Cyclery loves the Grateful Dead and the team at Stinner Frameworksloves a challenging paint scheme. After a few design emails were passed between the two, this is the final product. Built with all the t’s crossed and i’s dotted, this bike is ready for just about anything Kyle can throw at it or jump off of with it.

SRAM’s Eagle 1×12 drivetain will ca-cawww into the San Gabriel mountains with those plump 2.8″ ONZA tires and King bits all around. That rowdy Pike will make minced meat out of the granite babyheads and all the while, Kyle will be singing his favorite Dead tune. Yes, this is a delightfully absurd bike, but as I’ve seen in person this year, it rips!