Initially Jesse and Ryan wanted to crush the full 660 km in 24 hours but after they drove up to recon the roads a week earlier, we decided to spread it out over two days as to not miss the best scenery by riding at night. To keep the load at a minimum, they left some essentials in a van on a friend’s piece of land up in Copper Harbor. I took this opportunity to ship my panniers up there so that I could continue riding self-supported from the Upper Peninsula back down to Milwaukee, Wisconsin. 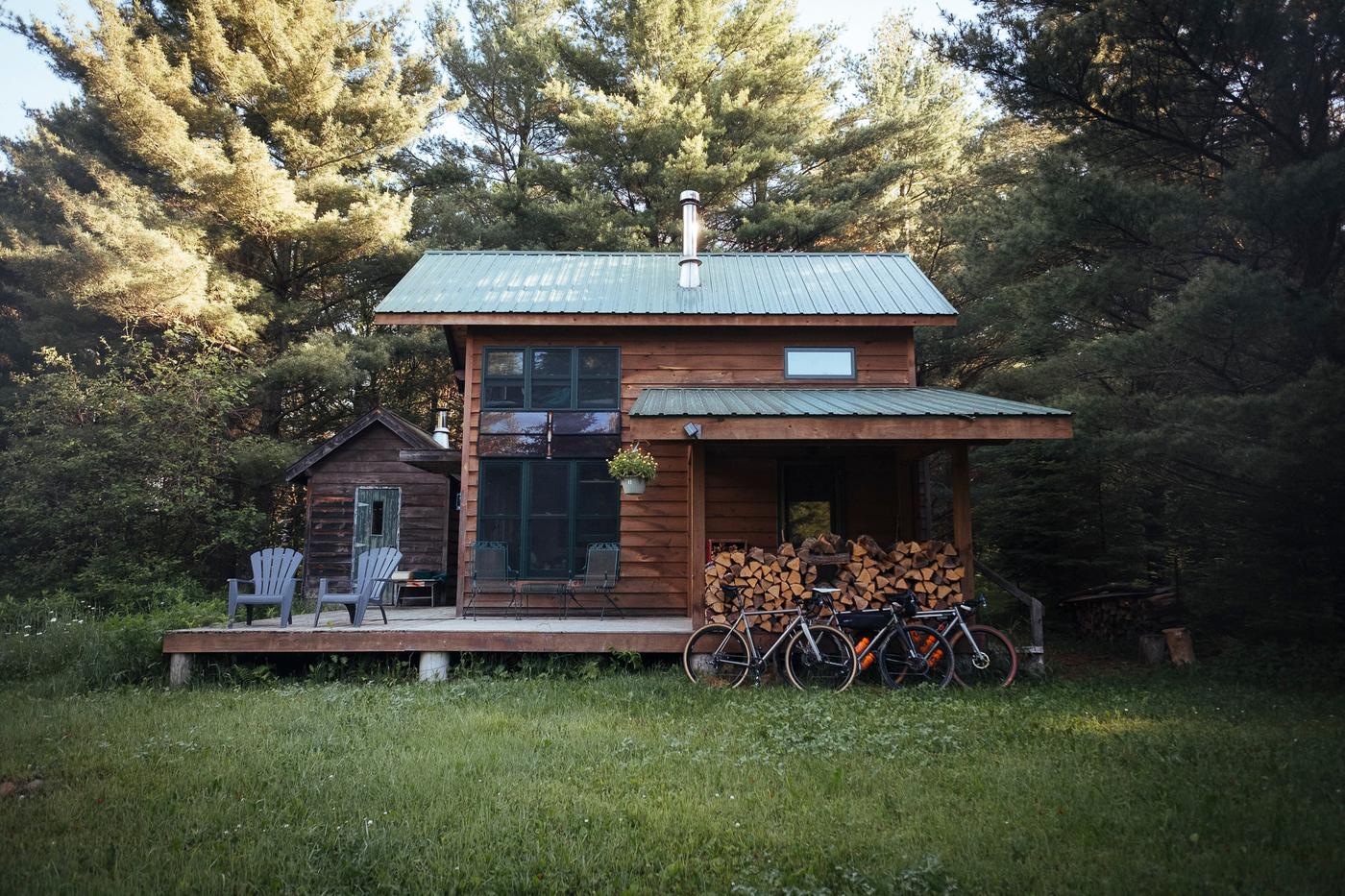 Because of the recon the week before we were able to pack pretty light. Ryan went super minimal, packing only what he could fit in his jersey pockets and a tool roll under his seat. Jesse traveled light; he had a Fairweather seat bag with essentials and some tools. I was definitely weighed down the most. This was my first self-supported trip and I quickly realized that I waaay overpacked. In my defense, I had no idea what I would need so I played it safe and packed a lot of unnecessary weight. At the last minute, I cut down 5 lbs of silly stuff like a Co2 (I had a pump), warmer clothes (it was forecasted to be an average of 85-90 degrees), and nutrition (we hit up gas stations & general stores along the way). Even after shedding all that extra stuff, I still had quite the load carrying a frame pack, seat bag, and handlebar bag for my camera. 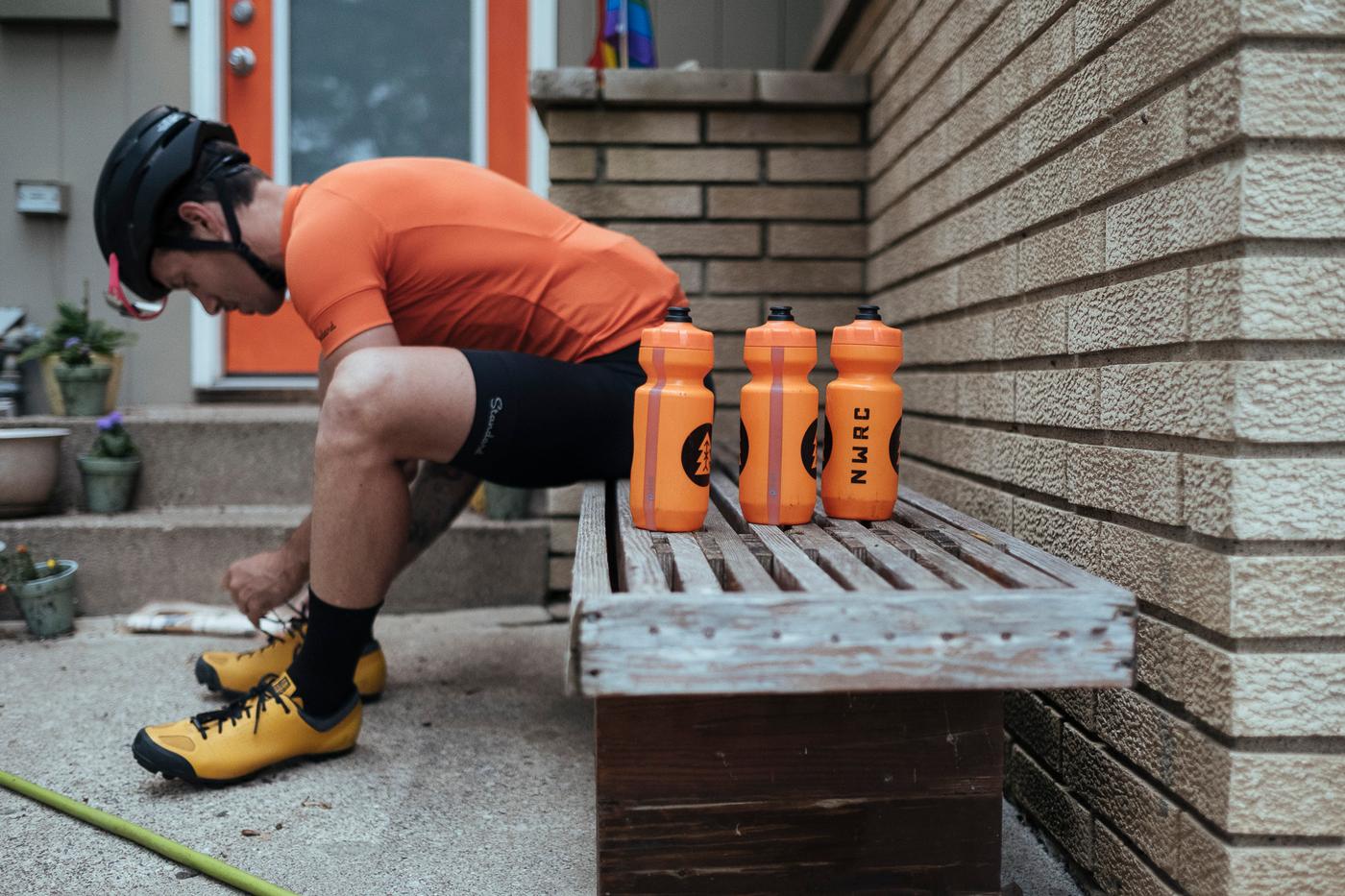 We left Minneapolis around 6 a.m. in order to beat the morning traffic before hitting some
hard packed trails and country roads. The sun was hot and quickly became the enemy that forced us onto a neglected, but shaded state trail. We were already 75 miles in by 11 a.m., so we were all feeling pretty good. We got a quick sandwich for lunch but kept moving to assure we would reach our goal of Cable, Wisconsin, which was still 150 miles away. We spent the next few hours zigzagging up country roads before hopping on an abandoned railroad trail in order to keep the ride interesting. Ryan ended up with a flat and me a slow leak in my rear tubeless tire that would not seal up. We stopped and repaired Ryan’s flat, while being attacked by horseflies.

Just as the sun was kissing the treeline we arrived at Lake Chippewa flowage, which is at the edge of the Chequamegon-Nicolet National Forest of Wisconsin. After spending 40 or so miles stopping every 20 minutes to re-inflate my tire, I finally just threw a tube in it for the last leg of the day. We took this opportunity to eat a quick dinner at a small restaurant that was decorated with record sized musky taxidermy and local fishing stories. We were losing light quick and with my flat fixed and our stomachs full, we pushed on. 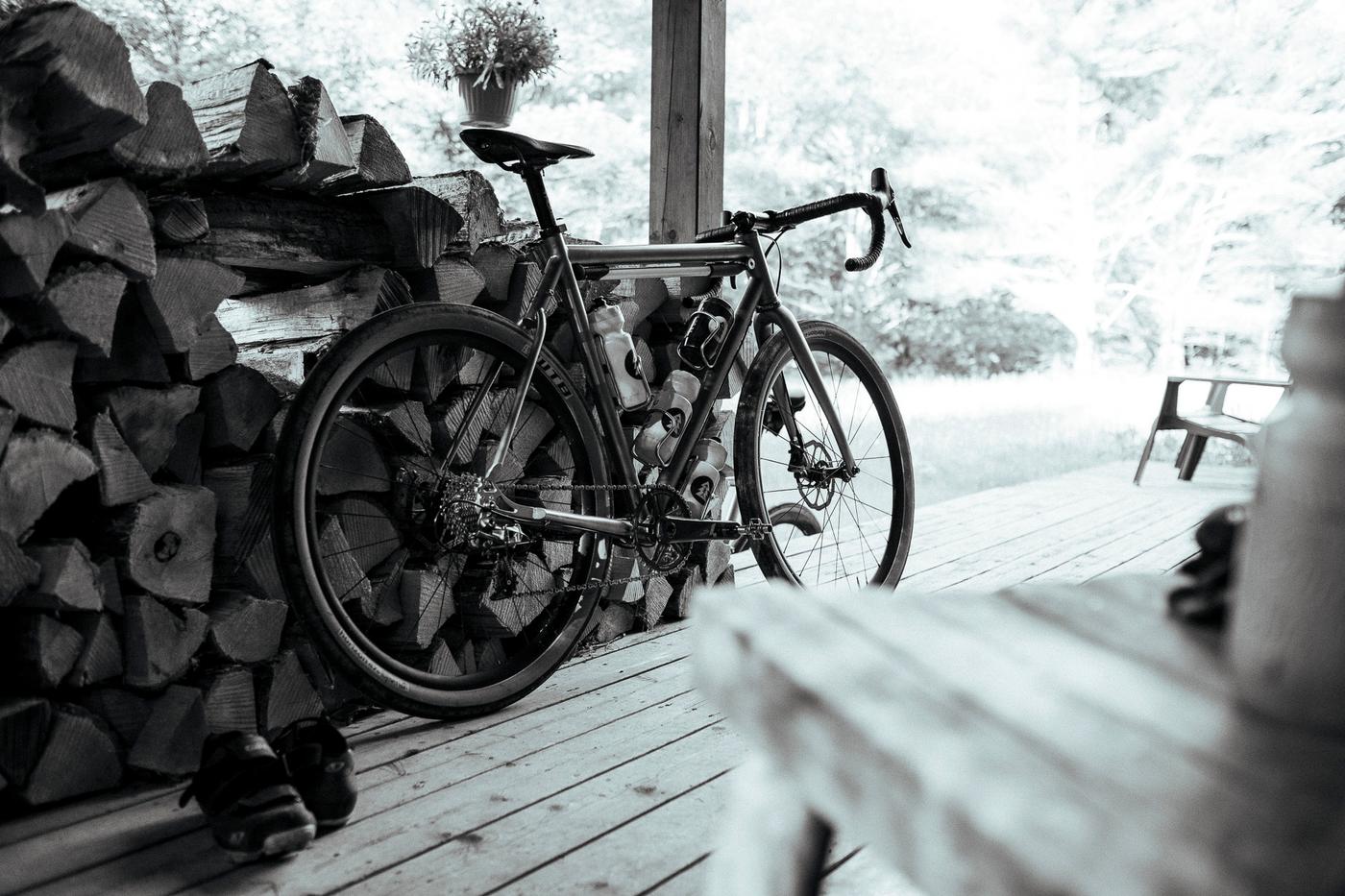 As we got closer to Cable, Wisconsin the roads began to quickly degrade. Paved roads turned to gravel that eventually turned into Camp Road 38, which was filled with huge ruts of standing water and plenty of sharp rocks. We clicked on our lights, found our independent paces, and re-grouped at the end. Once we made it to Cable we met up with Jesse’s friend Tom (and our host for the night) at a well-known Bar/Restaurant called The River’s Eatery. There was a group of locals hanging out sharing stories of past Chequemegon 100 MTB races. By the time we got to Tom’s cabin it was already past midnight. Two hundred and five miles behind us, many more to go.

The next morning I woke up barely able to use my left hand. My pinky was completely numb and my fingers were extremely weak. This was the longest I had ever ridden self-supported and my body was feeling it. Tom’s place was amazing and everything one would expect from a cabin in the northwoods. There was no electricity and it had only the bare minimum, such as an outhouse and a ladder to a loft for sleeping quarters. However, there were rescued mini ramps from the Lake Owen Skate Camp that I was jonesin to ride. After some coffee and oatmeal over good conversation, we were back on our way. Starting the day in the heart of the forest was so refreshing. Nothing but pines hugged the rolling forest roads for miles and the number of cars we saw that morning could be counted on one hand.

The first 30 miles of gravel felt more like 60 as I felt the fatigue from the day before. Despite this, we needed to make better time so our water stops were shorter and our pace was higher. The gas station food products was starting to catch up with me so we stopped for some well deserved sandwiches once we hit our 75 mile mark in Ironwood, Michigan. After lunch, we pace-lined on a fairly busy travel road that lead us to some of Michigan’s finest forest service roads with steep grades and loose terrain. This was the hardest 30 miles I think I’ve have ever experienced on a bike but also one of the most beautiful. We were rewarded with a fast but somewhat scary descent before being given one last climb into Rockland. The last 75 miles presented us with an enjoyable landscape as the sun set slowly along side us. 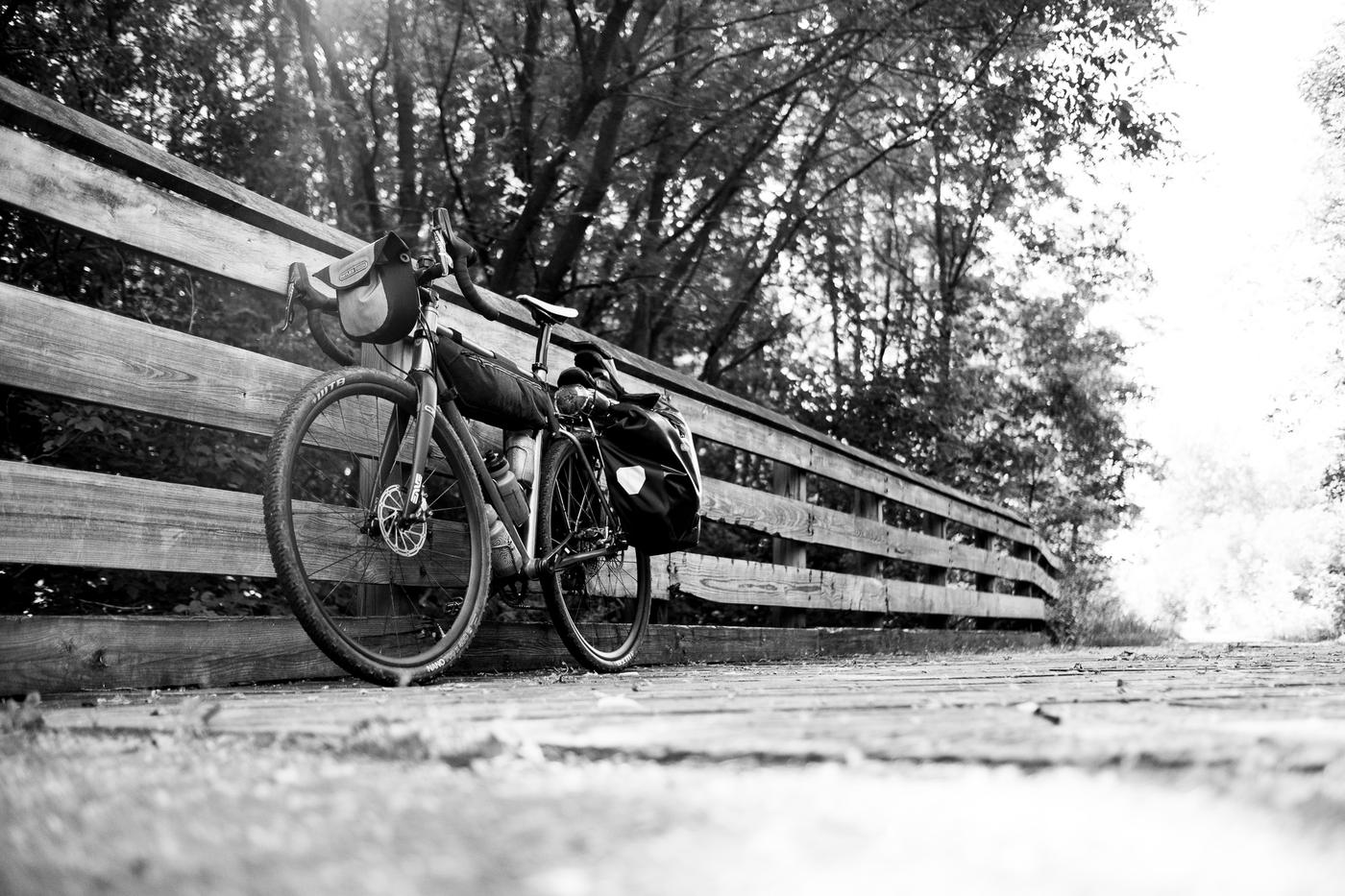 It was 11 p.m. when we rolled into Houghton/Hancock. I called it a night there in hopes my body would feel better for the rest of the trip, but Jesse and Ryan continued on for the last 40 miles to reach the van parked in Copper Harbor. They made it just before the sun rose over Lake Superior and they got a few hours sleep on the beach.

My solo journey back to Milwaukee did not disappoint. Good old northern hospitality paired with some small town charm is what makes this area of Wisconsin so quaint. Being from the city, you forget how generous people can be. For example, in the small town of Long Lake, Wisconsin, I met an older couple who didn’t hesitate to put me up their cabin for my first night riding solo. Although I was anxious to pitch my hammock, I didn’t have the heart to turn them down and so I decided to put it off for one more night.

The ride back home was long and sometimes brutal because of the heat, but I have to say that riding for three days without internet and support or any kind of routing system was personally satisfying. As I exited the northern forest that lead me back into the farmland that was more familiar too me. The last 100 miles or so I began thinking about my next tour and critiquing my preparations for this trip. I could have easily shed half of my stuff and would have been fine. I learned a lot on this trip, far more than you could ever read about on any blog. Some things you just need to experience for yourself and figure out what you do and do not need. All in all my first tour was a success, I recharged my mind and I grew a new found appreciation for the state I call home.