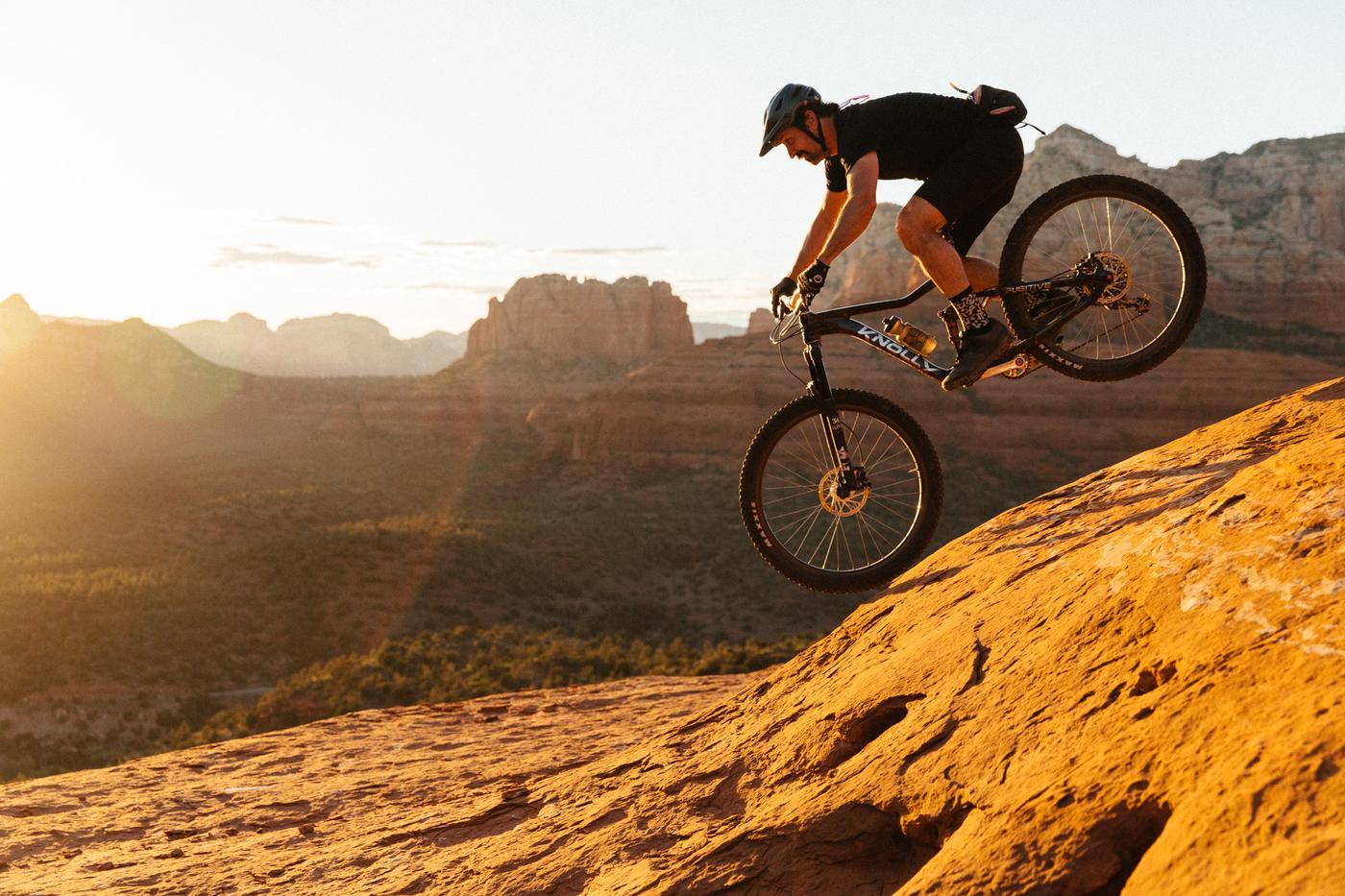 Whether or not you’ve heard the name, Knolly has been on the forefront of some of these innovations for a while now, pushing a small-scale, rider-focused, engineering-driven approach to bike design. They caught my eye several years ago in Bozeman, Montana—my friends Mason and Steve run the shop up there and both had these weird looking bikes that I hadn’t heard of. Nobody was really sure how to say the name, or why they looked unusual, but everyone who rode them seemed stoked. I wanted to know why the heck anyone would make a linkage like that looked like that and why the Knolly riders were so devoted to the platform.

Perhaps the most hotly contested battleground in full-suspension bike technology is the highly technical arena of linkage and rear suspension design. How do you maximize traction while maintaining pedaling efficiency, minimizing brake dive, and controlling shock progression, especially in a world dominated by proprietary design and intellectual property law?

Knolly’s suspension design is the brainchild of the company’s founder Noel Buckley, whose company was formed around his patented way of decoupling the path of the rear axle from the shock compression. The somewhat complex linkage design is meant to isolate each suspension variable so that they can be tuned specifically to a rider’s style and terrain. That, combined with Knolly’s ethos of modularity, combine to make their bikes customizable for a wide variety of circumstances and uses. 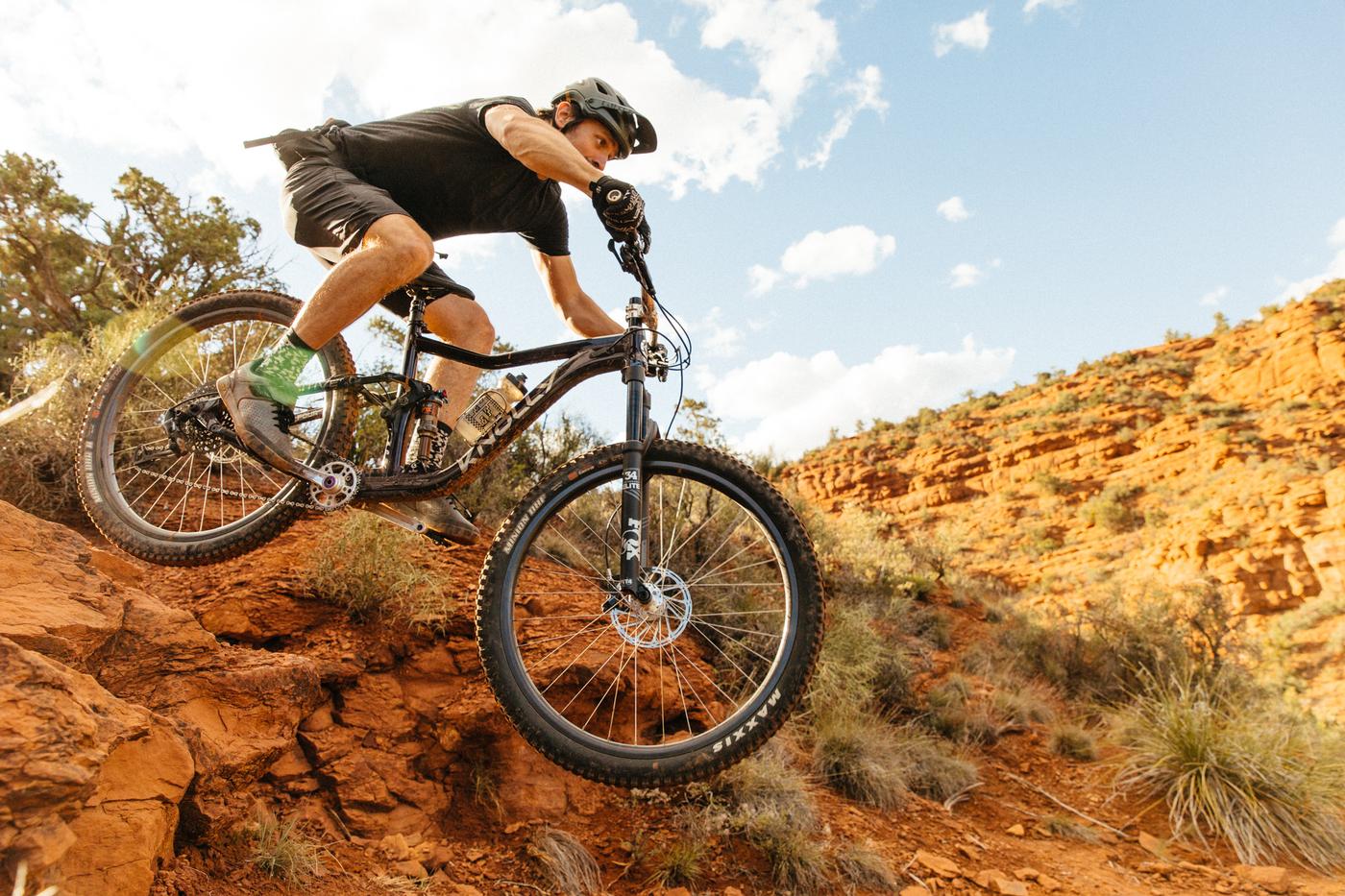 The Fugitive is the latest addition to Knolly’s lineup and their first new bike in a couple of years: a shorter-travel 29er meant to ride like a bigger bike and shred everything from flow trails to steep chunk. It features short 430mm chainstays made possible by a wide 157mm rear hub spacing that fits a 2.6” 29er or a 3” 27.5 that maintain similar BB heights. While some will groan at a new hub ‘standard’ Knolly goes to great length to explain why they used it on their website: “We only incorporate design changes when there are legitimate benefits to the ride experience. If the current wave of 1x drivetrain technology existed [Boost came out when 2x drivetrains were still common], the wider spacing revolution would have skipped right over 148mm and landed on 157mm.” This hub spacing not only allows short stays and big tires, but maintains a narrow Q-factor using a 73mm threaded BB shell, and provides a stiffer wheel to boot. The area around the BB cluster looks strange, in fact, when the bike was first built up at Golden Saddle we were all convinced that the BB was in the wrong place! This is due to the seat tube actually being moved forward out of the way of the rear suspension resulting in a straight tube that has an effective angle of 76 degrees. This allows long-travel droppers to be used even in the small frame sizes, while simultaneously letting the saddle move forward and away from the rider’s body when descending, allowing for maximum body English over the bike.

The Fugitive is made out of Aluminum, and while you pay a little bit of a weight penalty for that, (between 1-1.5 lbs vs a carbon frame) it is less expensive than carbon, and arguably more durable. The stiffness and lightness of Aluminum make it a near-ideal full-suspension frame material and it is refreshing to know that they actually *added* weight to the frame to improve the aesthetics—Knolly knows that weight is but one of many factors that make a bike ride well, and a pleasure to own. Unlike some bikes that are mitered before being welded, Knolly’s tubes are machined, giving them tight fit that results in better weld penetration, and thus a more durable frame. The Fugitive has that burly feel and goes with its aluminum construction—it complements the highly engineered look and feel—and is a textbook case of form following function. That isn’t to say that a certain industrial elegance isn’t evident in the aesthetics though. The cable routing is well thought through, clean, and simple. A large port on the downtube makes fishing cables and a dropper a breeze, and stores a Di2 battery if you’re so inclined. You can see special attention paid to the machining on the linkage, reducing weight and streamlining the look. Custom made titanium hardware holds the suspension together ensuring durability.

The Fugitive comes as a regular or an LT version. It’s important to note this is the same frame, just set up with different suspension. It can be set up 140/120mm for more of a trail feel, or 150(160)/135mm for a little more plushness. You also have the option of running the rear shock in the standard or ‘slack’ position changing the headtube angle from 66.5 to 65.75 degrees. These options are the heart of the bikes modularity. 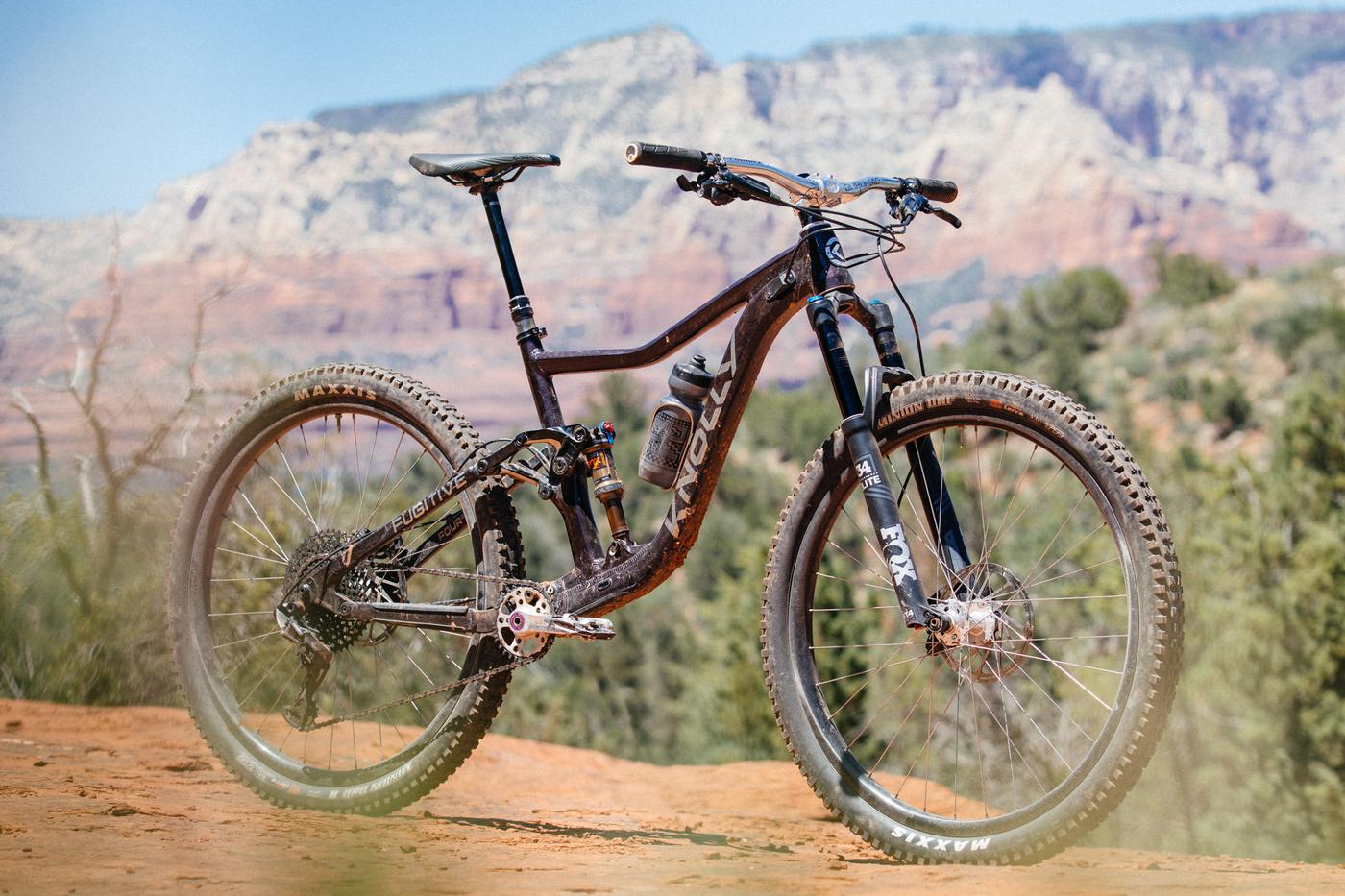 Knolly offers a few levels of builds on their bikes, all have high-quality components with the most affordable starting at $4909. The bike as tested was set up in the shorter travel configuration, and given the nature of the trails in Los Angeles (steep, technical, tight) I went with the non-slack shock position to keep things nimble, and a 120mm Fox DPS EVOL in the rear and 140mm Fox 34 FLOAT EVOL in front. I’m a fairly evenly proportioned 6’0” height with a 33” inseam and went with the Large frame size. Knolly urges you to not size up or down and has a handy chart on their website with real-world rider dimensions and what size frame they ride – note to other companies: do this! 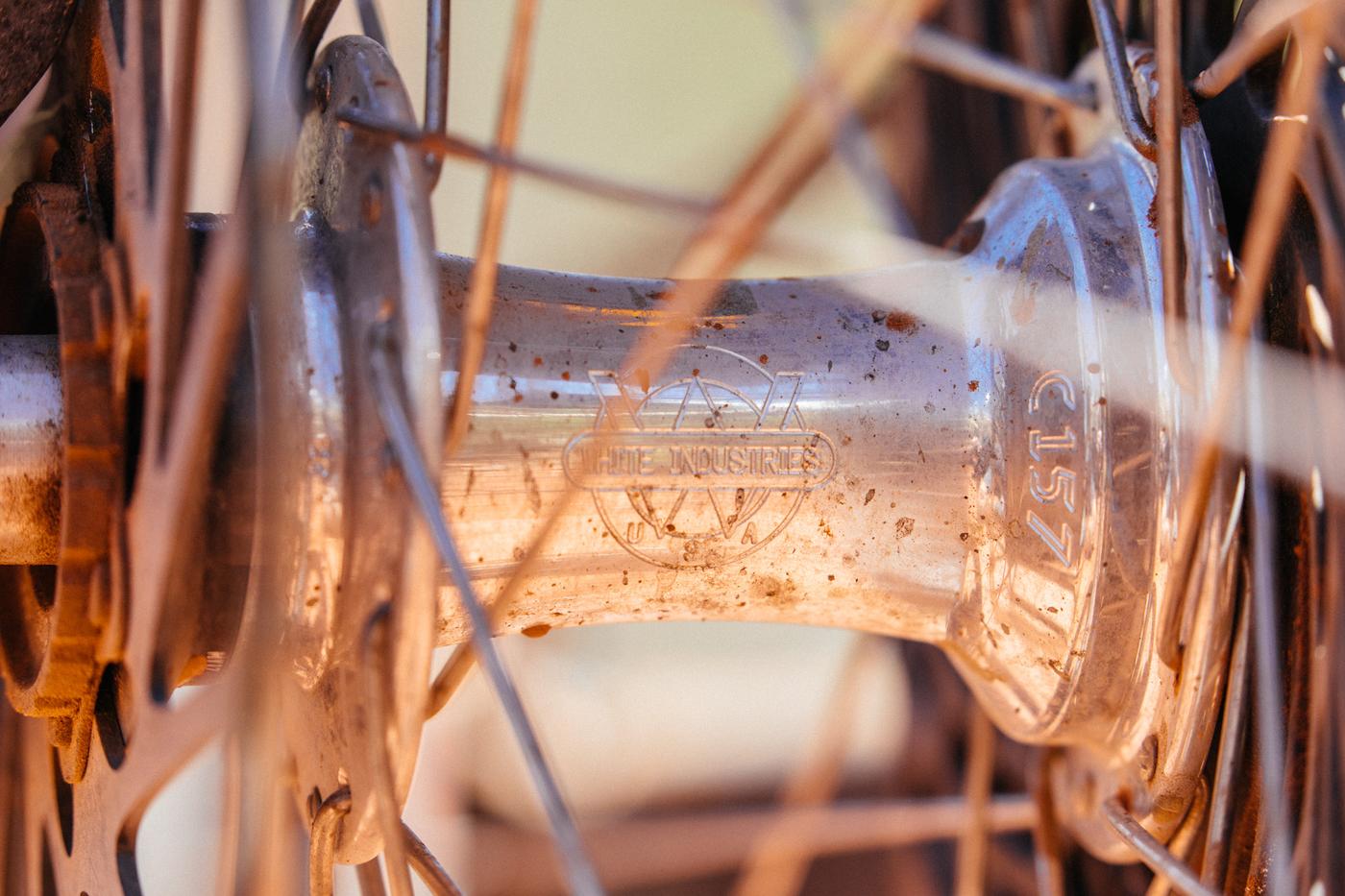 Luckily, component manufacturers are getting on the 157mm hub dimension train—I was lucky enough to have our pals at White Industries set me up with one of the first sets of hubs they’ve made that conform to this spec. And, in case you didn’t know chrome is back, baby so we laced them up with chrome spokes to some carbon Agent rims from WeAreOne Composites. WeAreOne is a relatively young Canadian company that designs and manufacturers their rims in Kamloops from American made carbon. They’re reasonably priced at $450 per rim and come with a no questions asked lifetime replacement policy even if you break them (which I did!). After I broke the rim, I inserted a Cush Core in my rear wheel to soften the blow. I was running Maxxis DHF/DHR combo which comes standard on the Fugitive, in 2.3”. 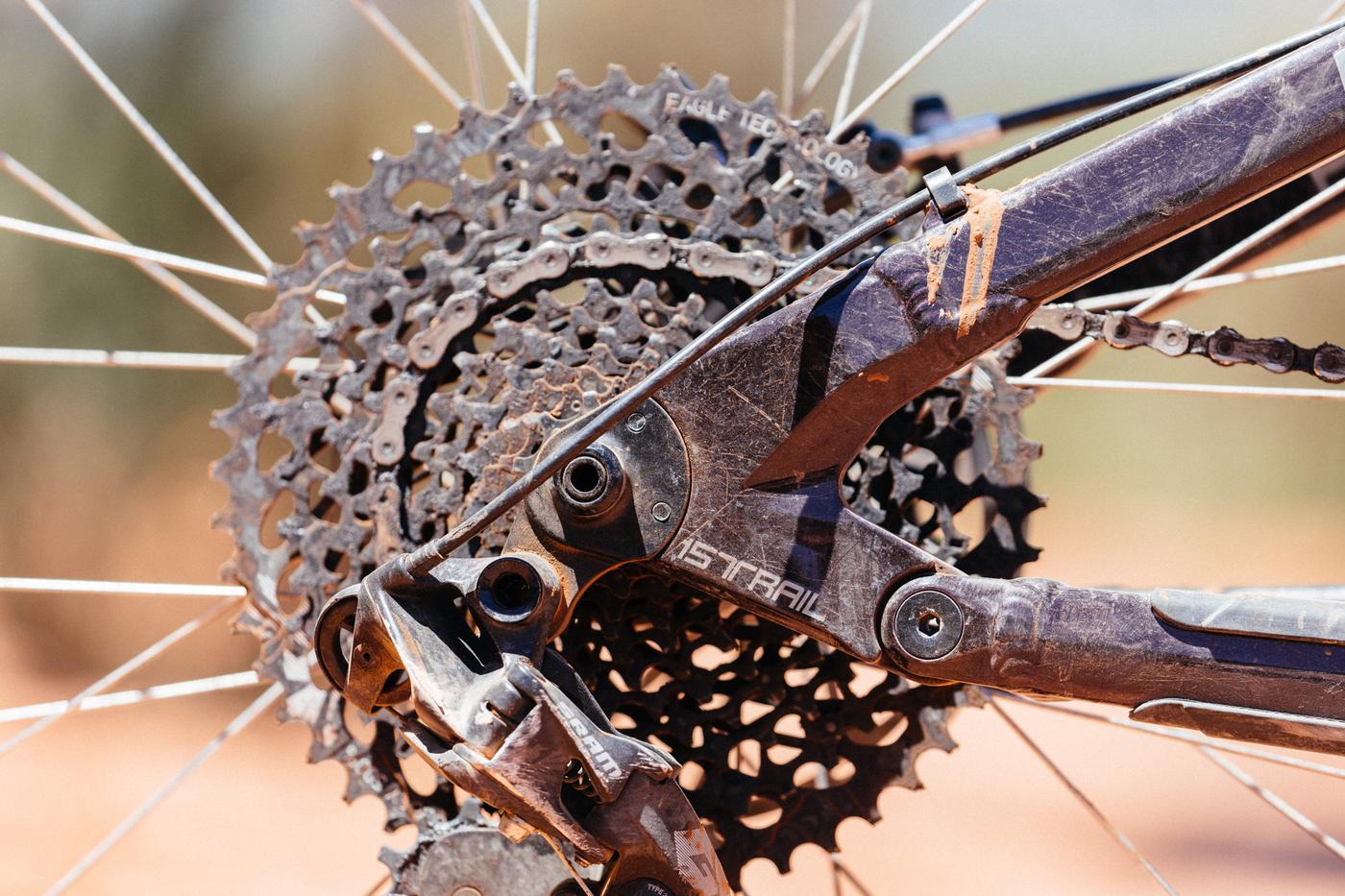 The drivetrain is GX eagle which has a huge range, is affordable, and is bombproof (seriously, we are so lucky to live in 2019). To complement my extravagant lifestyle, you know I had to put a White Industries M30 crank on it, they just look so good! A quick check with Alec White revealed that you can run their rings flipped and solve your chain line and clearance issues, but any of the SRAM DUB cranksets play nice too. It’s finished off with some other chrome bits from White, a Paul Boxcar stem, and the only wide polished chrome bar I could find—the Chromag Fubar. 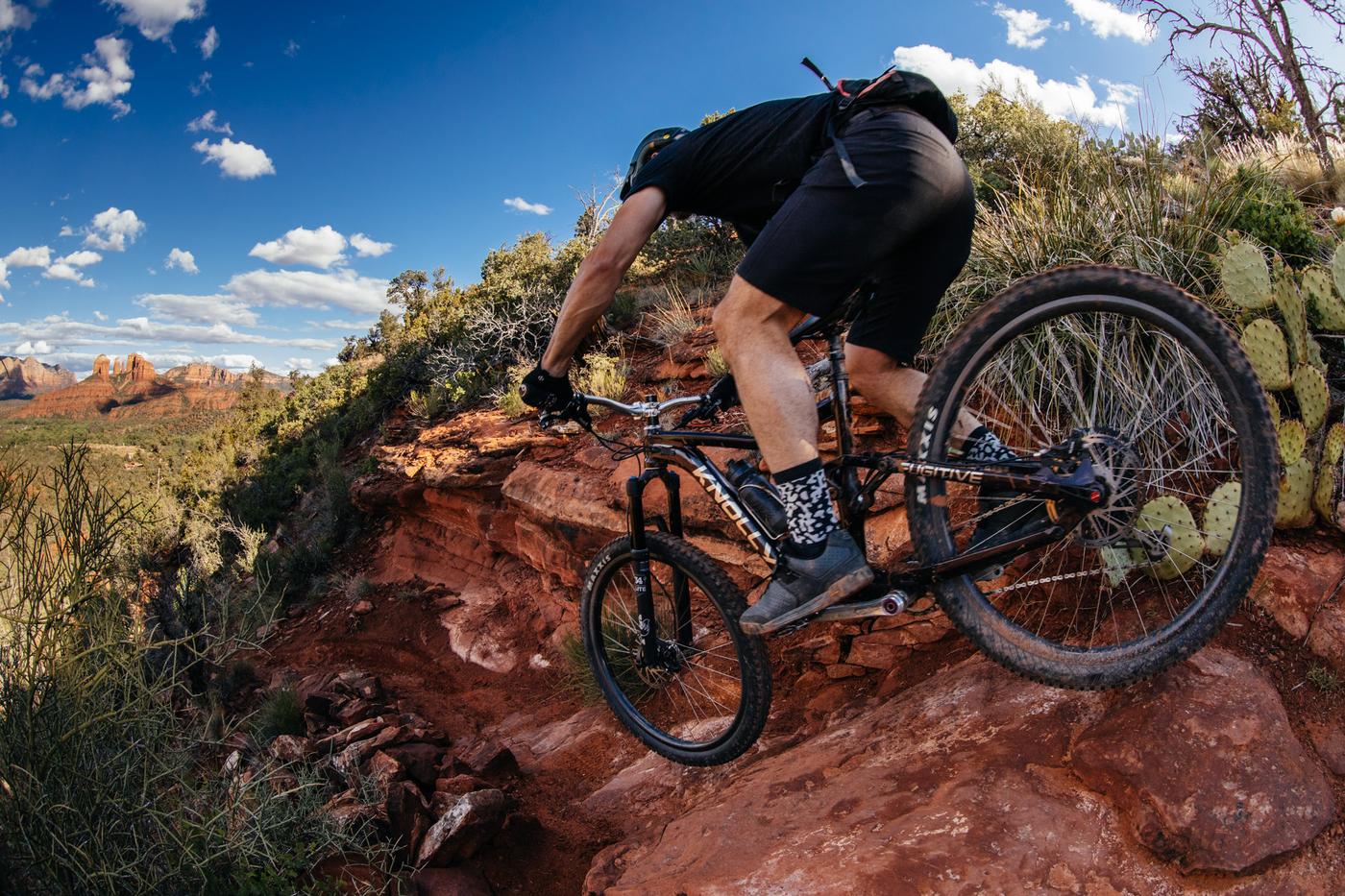 A defining characteristic of Knolly’s suspension design is its near-legendary rear-end traction. It was clear immediately that this was a strength of the bike—seated or standing, the suspension clamped the rear wheel to the ground, and climbing noticeably better than a hardtail with a fatter tire. You don’t hear much about how 29” wheels climb, but I also noticed the larger diameter rear wheel’s tendency to roll over and through technical obstacles that would have killed the momentum of a 27.5.” The complete lack of any noticeable climbing bob was impressive. I found myself looking down to check to see if the rear suspension was locked out because there wasn’t even any bounce even when fully open. With a steep effective seat tube angle, your weight is also centered nicely over the bike in a way that holds the front wheel down while also putting enough of your weight over the rear wheel. Wheel flop was noticeable but minimal, and overall you’ll find this bike top notch for going uphill. But let’s be honest, most of us climb for the sole purpose of going downhill, and boy does this bike want to go down. Dropping the post you really notice the seat-tube design; your body moves forward on the bike, and then lift up off the saddle, it is moved forward and away from your body, and you’re in a ready position. The bottom bracket sits low, giving it a stable, solid feel, but it never clipped rocks with the pedals or had that ‘whoa this BB is lowwwwww’ sensation.

The Fugitive plays like a bike with more travel and feels nimble for a 29er—it can dance, pop, and pick a line apart with equal ease. It was also plenty happy smashing its way into the chunkier sections, with an even progression to the suspension that never bottomed out. The feel of the suspension is a little bit hard to describe: it isn’t firm, but it also isn’t squishy. I guess I’d just have to call it ‘supportive.’ It’s there when you need it, but almost unnoticeable when you don’t and has the added benefit of always giving the rider feedback; it never feels big and dumb, just active and cushy. The bike was inspired in mid and slow-speed, technical sections, rolling over and maintaining the momentum that would otherwise kill your line. In the flatter sections, it built and held speed in a way a longer travel bike tends to deaden. The moments we found downhill flow and speed, the Fugitive really felt like it came into its own. Carving on edge in a similar way to a modern shaped ski, it popped into and out of corners and carved and responded with joy when ridden aggressively. When the going gets weird, it’s easy to get the Fugitive off the ground to avoid the mank, as long as you have a landing zone in mind. I’d love to ride it in the longer-travel version in technical faster terrain since it would simply gobble that kind of stuff up; the supportive suspension and big wheels would excel in more swoopy, faster terrain than we found in the desert. 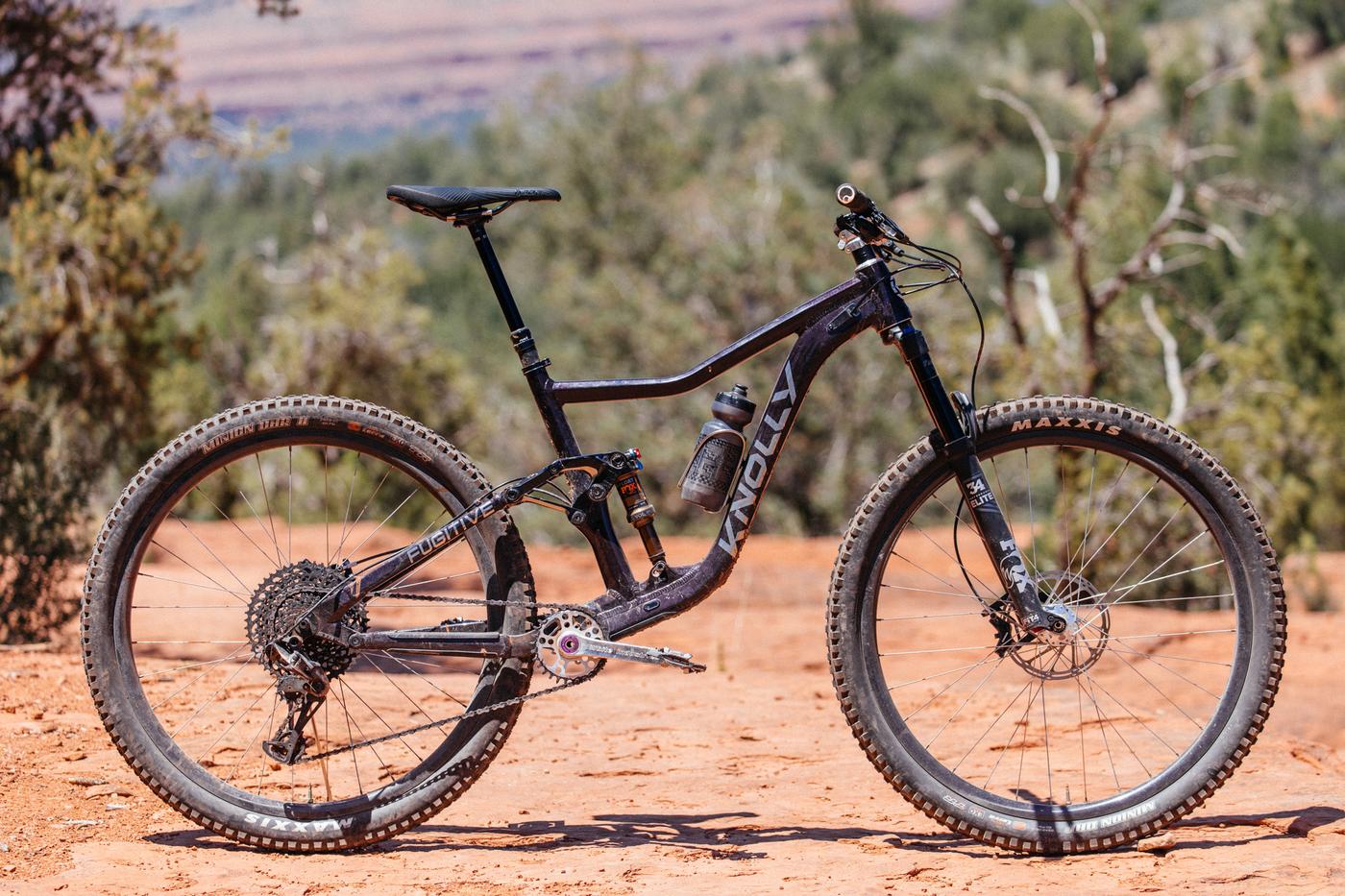 Overall, the Fugitive just feels really well balanced, and the ability to set it up in a host of modular configurations to suit your riding style and terrain is a clear benefit. That, and you’ll have hands down the best traction on the market. Knolly has gradually grown a devoted following, and it’s easy to see why; just make sure you pronounce it no-lee. ;)

See more on the Fugitive at Knolly.