My roommate, Austin, and I are discussing Ryan Van Duzer’s YouTube channel over coffee when there’s a knock at the front door. It’s my dad and my sister Paulina—they just made it back from dropping off her Subaru in Hatch, NM. I’ve been trying to get Austin into bike touring but he’s racing enduro today, leaving the rest of us Burnsides to rush out of here and join in on the Dangerbird. For the uninitiated, the Dangerbird is a desert celebration that takes place on the Monumental Loop, a 245-mile figure-eight track that tags all the desert peaks surrounding Las Cruces, New Mexico. The event draws in bikers and ultrarunners from all over, with the figure eight starting and ending in the city’s downtown square. With our bikes fully loaded, all that’s left to do is wheel them outside, start our Stravas, snap a group pic, and head off to meet the other bikers downtown. Luckily, today coincides with the weekly Farmer’s Market. Upon arrival, Pau and I lean our bikes on the stage and start our hunt for lunch burritos among the numerous food trucks. We make it back in time to stuff the burritos somewhere accessible and join in for the group photo. At 9am, a stampede of one hundred bikers is led by Grace Holguin on her modified tricycle around Klein Park before starting off towards the jagged peaks of the Organ Mountains. In the first mile, my burrito catches the eye of Van Duzer and we start talking. We ride with Ryan for a few miles and eventually reach the Greyhound Station; a bathroom line of bikepackers snaking out the front door. I think it’s too early for us to break, so we cross under the I-25 overpass sporting a stunning mural of The Horse in Motion. Up the street we find an aguas frescas stand and team up on a thirst-quenching cup of jamaica—my go-to childhood drink when visiting our family in Mexico. The road runs out and we enter the Doña Ana bike trails, a popular bike network that winds about the chain of desert peaks. We climb, weave, and ride the mini berms. Paulina in particular is having a blast, she’s never ridden a trail with this kind of flow. We find a nice rock outcropping where we sit for lunch and watch nearly a dozen bikers pass by. Paulina points out the alternating rock deposits, some sporting a light orange or white color and some taking a greenish hue. 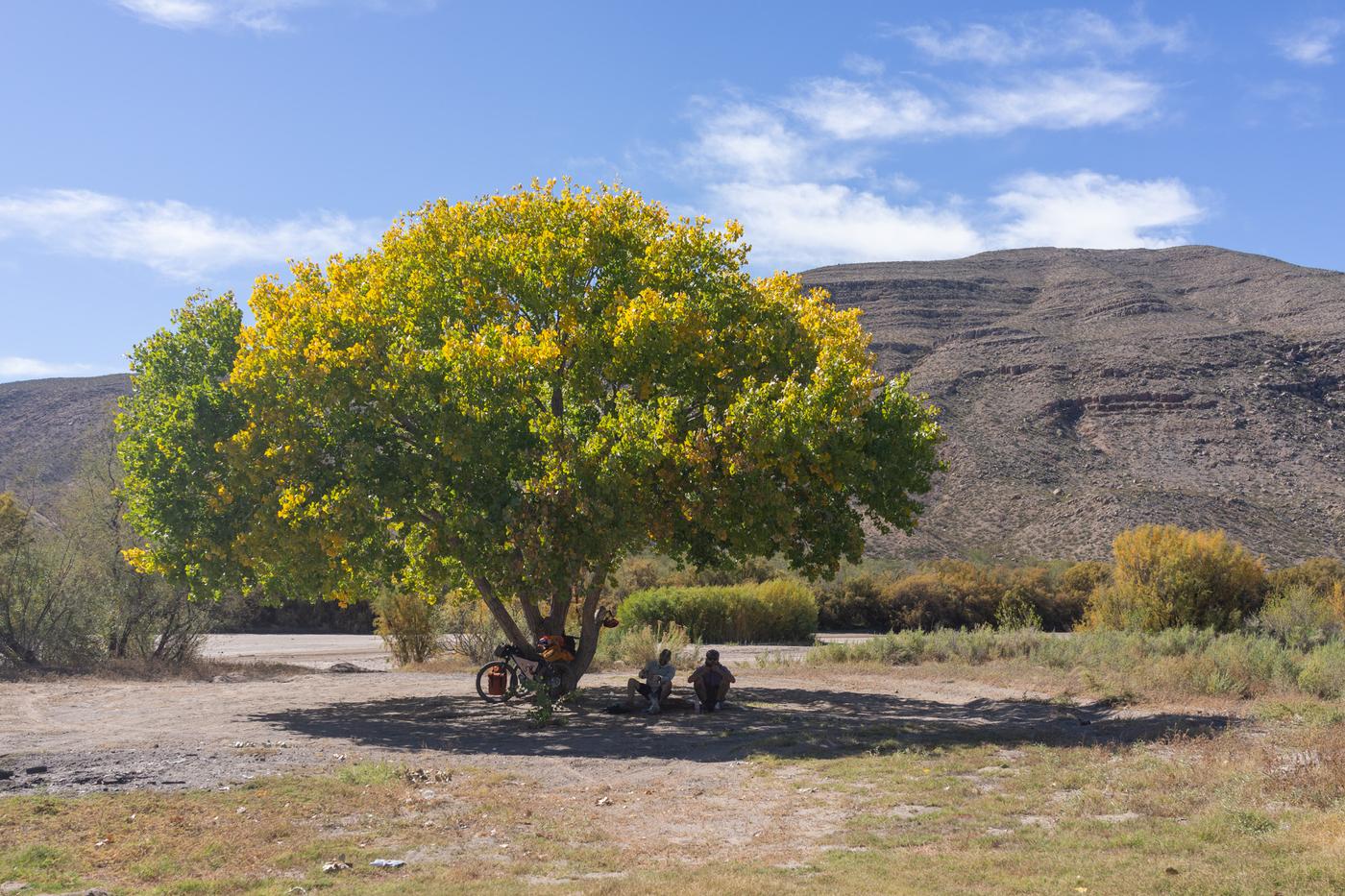 The Monumental Loop takes us along some rollercoaster power lines and spits us back out on the other side of the overpass, where we’re eventually riding alongside the dried-out Rio Grande. I’m happy to recognize this section from my last touring adventure. From here to Hatch is roughly the same stretch as the tail end of the “New Mexico Off-Road Runner” I rode to school in August. Riding along the ditch, dizzying rows of pecan trees flank our right and a view of the Robledo Mountains marks the horizon on our left. Every ⅔ mile, or so, we come across a towering cottonwood tree, each splashing down a welcoming canopy of shade. We turn off from the ditches, hitting pavement again. The road is still and for the first time on our journey, there is no other bikepacker in sight. This moment of solitude quickly turns around as we pull into the Blue Moon Bar. Leaning against the wooden barriers I spot hardtails, full suspensions, fat bikes, single speeds, even a cargo bike with a grinning and goggled dog passenger. I don’t spot any gravel bikes and I’m betting they dropped us ages ago. Inside, Dad buys us cokes and I buy Hostess snacks. A short while later, we’re rudely introduced to the Broad Canyon portion of the North Loop. Creosote bushes try to hide the topography but I occasionally catch glimpses of the distant canyons shaped by flash floods. The climbing is not bad—if anything, it’s consistent. Colorful lubber plains hoppers hide in the bushes, Dad and Pau point out a stick bug. I turn around to make out the dark shapes of bikepackers closing the gap behind us. We drop into Broad Canyon and pass a bright yellow tractor-type machine that I find quite pretty. We are quickly losing light. Dad and I have accepted the fate of biking in the dark but Pau has other plans, zipping up the following climb. We reconvene at the top and hightail our way to an infamous rusty water tank. Before we make it even halfway, we drop our bikes in awe. The clouds overhead have lit up in a fiery orange while the lenticular clouds over Radium Springs shimmer a soft pink. The sunset fades and we mount our bikes, one by one turning our headlamps on. I catch faint blips of light, bikepackers making their way down the backside of the infamous White Gap… at night. 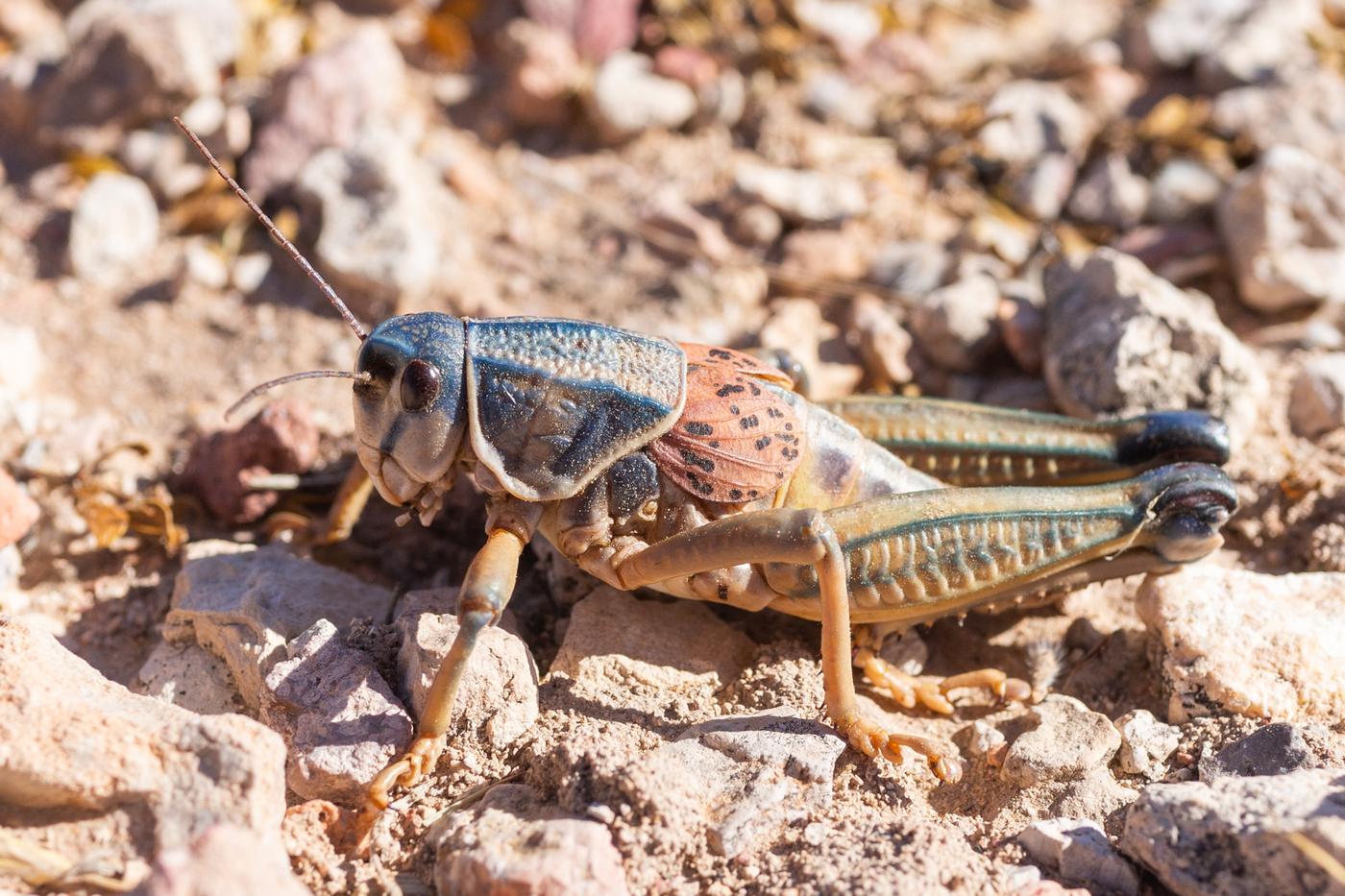 We reach the rusty tank and fill up enough to reach Hatch in the morning. We set camp, make dinner, and call it a night just past another group of bikepackers. I’m excited to start the day on a steady graded downhill, and even more amused to pass groups of bikers waking up as we coast by. The promise of a Santa Fe Grill burrito in Hatch makes me impatient, but touring isn’t a race (at least for me it’s not). Pau on the other hand, isn’t having it. I offer her half of my treasured Hostess apple pie, which turns out is exactly enough sugar to get her to the Pic Quik in Hatch. We fuel up on kettle corn and part ways with Pau at her car. Dad and I skip out on Sparky’s (First Degree Felony if you ask some) and tackle the pavement and headwinds west of Hatch. 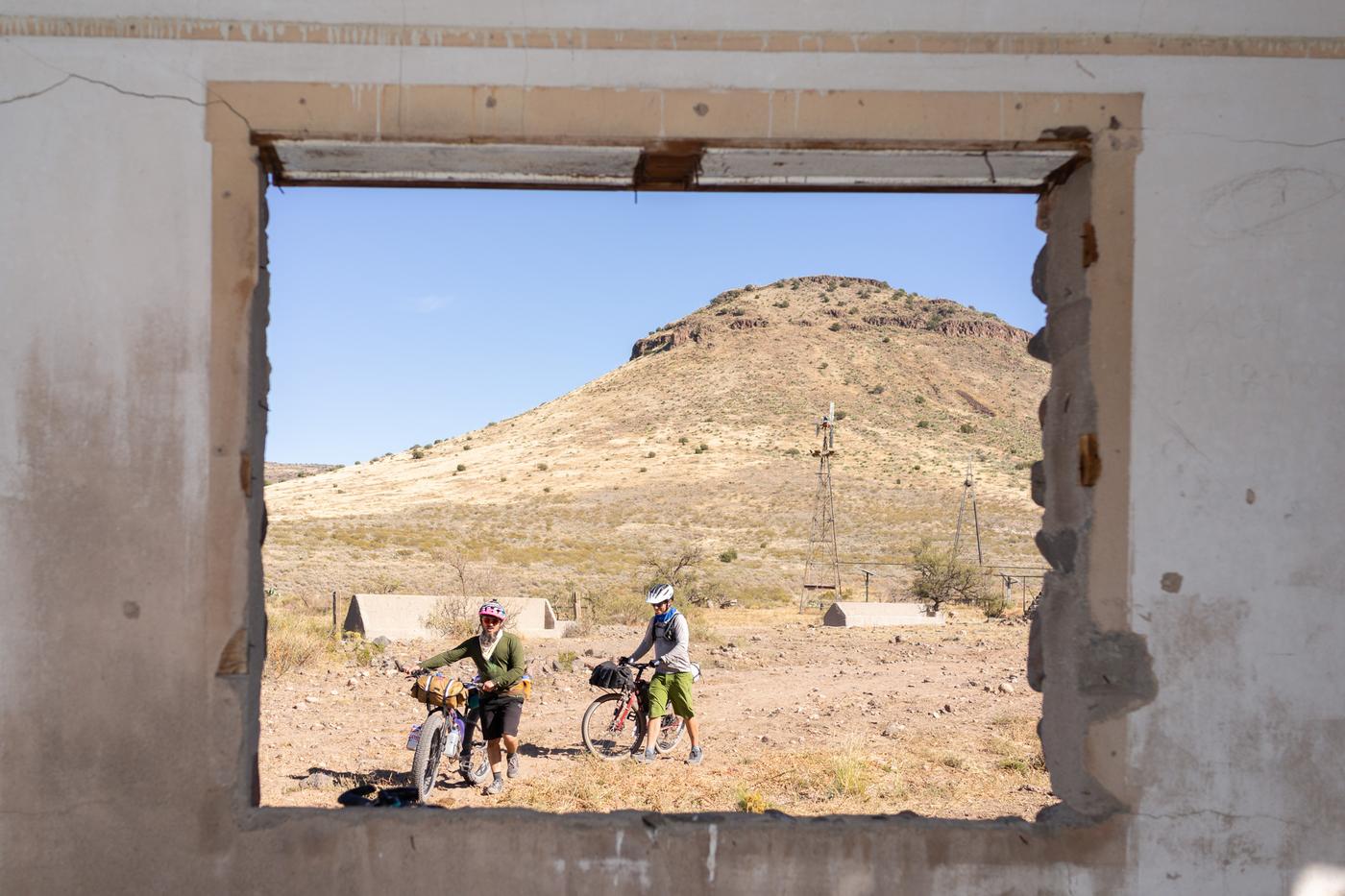 Less than a mile in, I realize today’s riding will be no easy feat. We make friends with Brandon and Dru, a duo who recently met on the trail. After an hour of this chunky riding and hike-a-biking, we arrive at the stone remains of a deserted house. Not only is this our first place to find water, it’s one of the only sources of shade we’ve seen since Hatch. Dad finds the water source while I explore the Hantavirus house, entering through the window and documenting its spaces with my camera. News about this oasis must’ve gotten out, since nearly a dozen riders show up in a span of twenty minutes. Dad, Bradley, Dru, and I decide to leave the party to face the aforementioned White Gap. We spot a pair of fatbike riders ahead and speed up to catch them, but end up losing Dru and Bradley in the process. 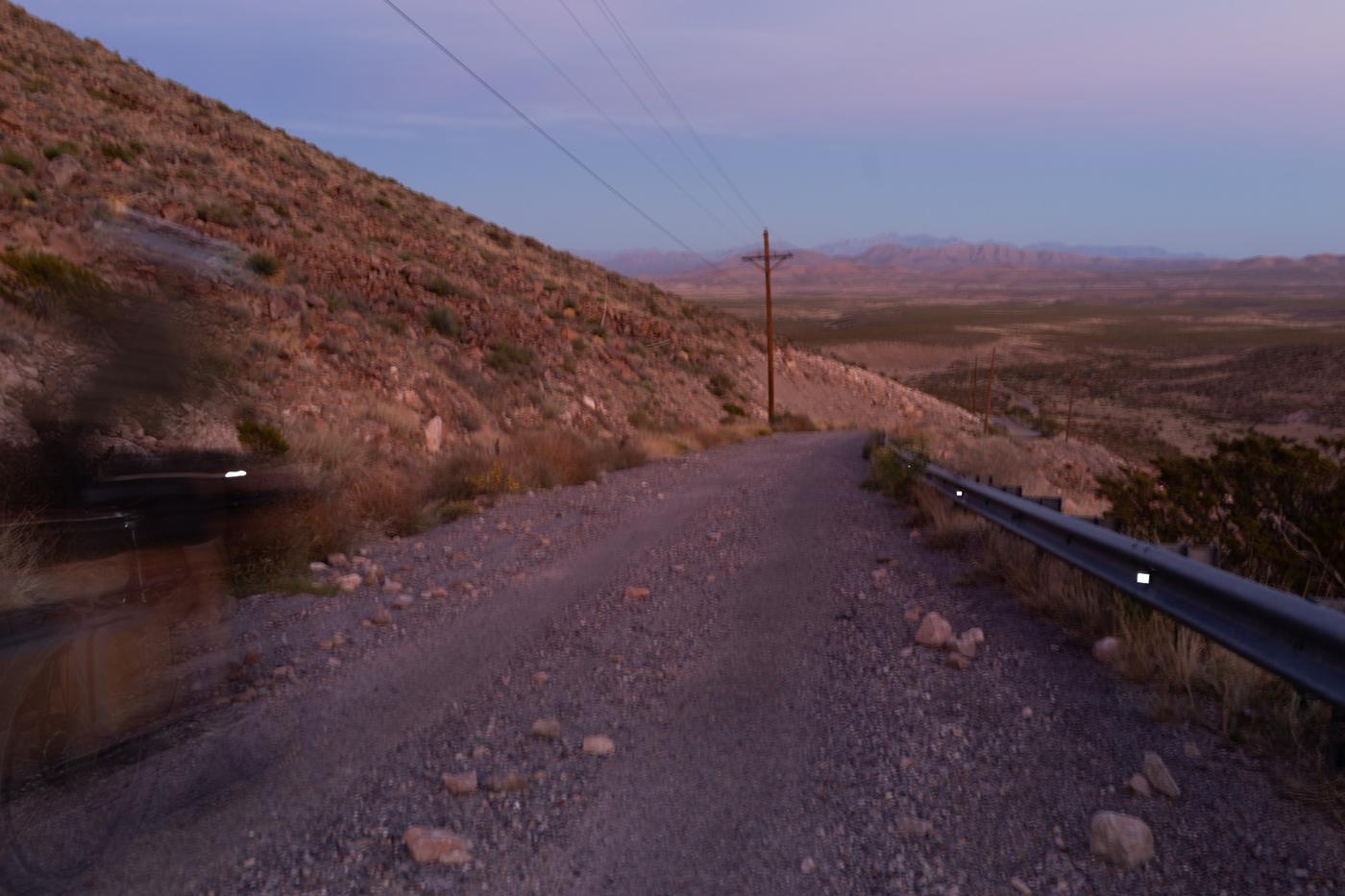 Dad and I still have a bit of juice from lunch and ride out the final switchback of the gap. We take a rest at the top and meet the fatbike riding duo, Mike and Steve. They drop us on the descent of White Gap, which I find to be hairy with some parts urging me to hop off my bike and walk. Dad and I are in good spirits, but climbing the Gap puts us in the shade. We need elevation if we want to catch the sunset. The first clouds start to light up as I reach the pavement. I’ve never been here before but based on all the previous climbing I have a feeling that the worst is behind us. Dad and I take off on a screaming descent, racing the dusk light to the desert floor. The two of us pitch camp, fix up dinner, and browse today’s photos. Dad makes a point that it’s warm enough that we don’t have to bury in our sleeping bags right away and I bug him about the tripod he’s hauled this whole way. In less than a minute, we’re taking turns behind the camera light-painting yucca, the bikes; anything before the moon rises. The moon must be sleeping in because we hit the hay before we even get to see it. Once we wake up and pack, Dad gets out the drone, another toy we haven’t even touched yet. Dad’s drone shoots up in the air as I hear the pedaling of our buddies, Dru and Bradley, on the path behind us. This morning’s ride is sandy, but the miles are lost in friendly conversation. I talk to Dru about his PCT thru-hike and catch up with Bradley to ask about his single-speed fatbike. We stop to filter water and I climb the remains of a massive windmill. Dad and I split off from Dru and Bradley for the last time and opt for a quarter-mile sand slide that lands us right by Picacho Avenue. A series of turns later, we stumble across a familiar silver-toothed biker we met in Santa Fe earlier this year—Bill. He rides with us along the Rio Grande and shares lunch with us at the Dog House in Mesilla. Our journey ends here. 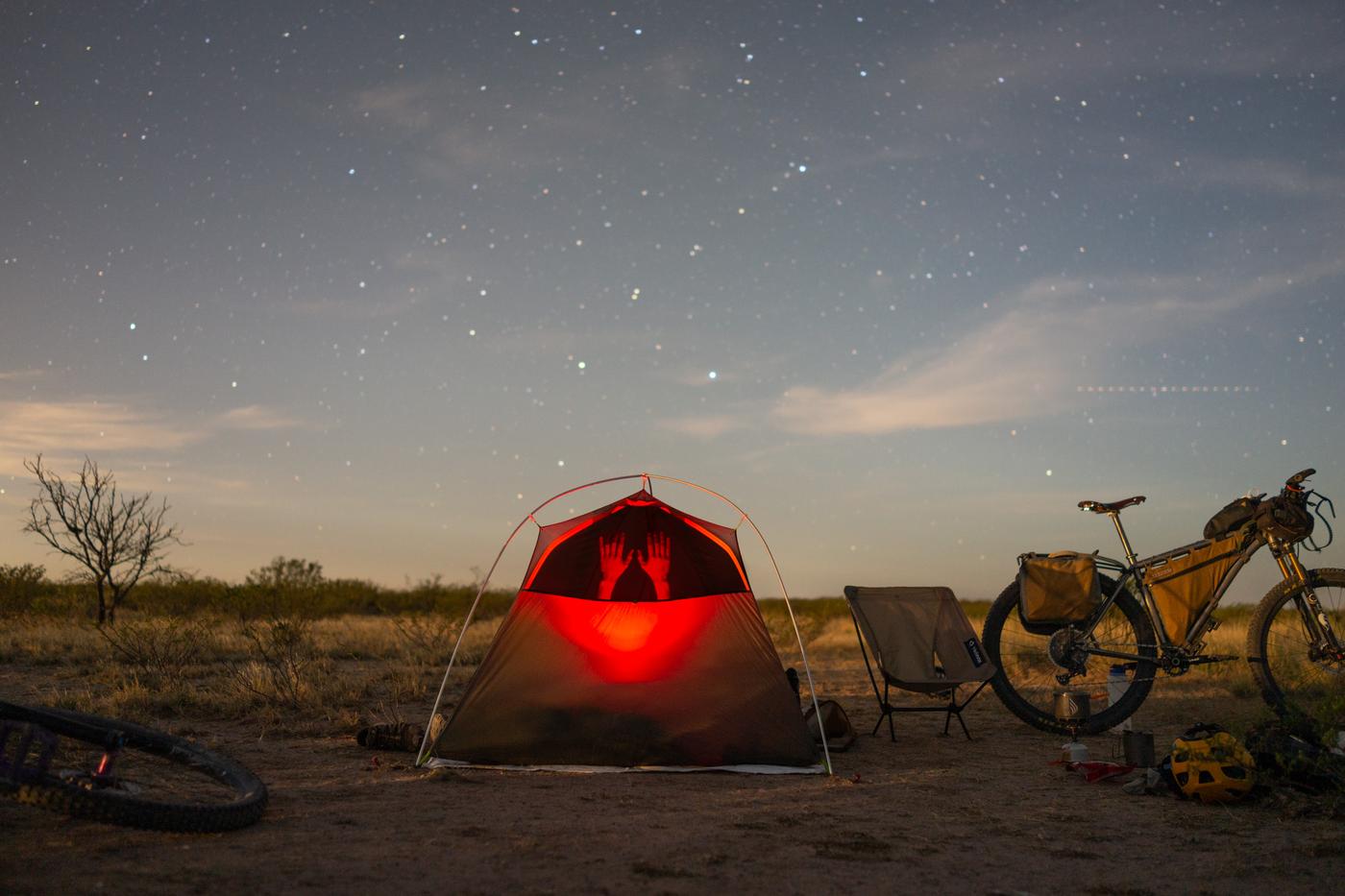 Dad and I wheel back to my home in Mesilla Park where I shower and get ready for class that very afternoon. Over the next four days, I sit in class, slightly unfocused from one lecture to the next. I find my attention going back to the route, tracking the progress of the bikers and ultrarunners wrapping up their very own adventures. My experience on the Dangerbird gave me something I never thought I could find in bike touring. I found camaraderie with a hundred bikers I had never met. The promise of community and desert beauty makes this a necessary ride for any passionate cyclotourist. Who will I get the chance to meet next year?