The Beginning: From Peru’s Desert Coast to the Cordillera
Photos and words by Ryan Wilson

I started trying to scheme up a way to make this return trip to the Andes happen while I was sitting in the Lima airport last November, waiting for my return flight to California. With the most significant cost involved being purely the cost of getting there, and with all of the opportunities for riding throughout the entire range of the Andes, I knew I had to make this an open ended trip.

For me, the goal was to be able to really experience these places rather than simply pass through. Have time to take days off to live amongst the locals, go for hikes, or do out-of-the-way day rides that I might decide to pass up if my time was limited. This also meant adjusting my original plan of starting in Colombia and going through Ecuador to eventually reach Peru. To really line up the seasons well and have plenty of time, I decided to forgo the northern end of the Andes for now and head straight for Peru, where I already had a ton of ideas for things I wanted to do.

If I’ve learned anything over the last few trips I’ve done it’s that by far the most difficult part is just getting there. Hauling a fully loaded bike over endless 15k+ foot mountain passes is physically draining, but it does not compare to the mental strain of making sure you’ve got the right gear, the vaccinations, the info you need, etc. This one came with even more baggage since I was quitting my job of ten years, moving out of my apartment, and getting a custom bike built for the trip all at the same time. 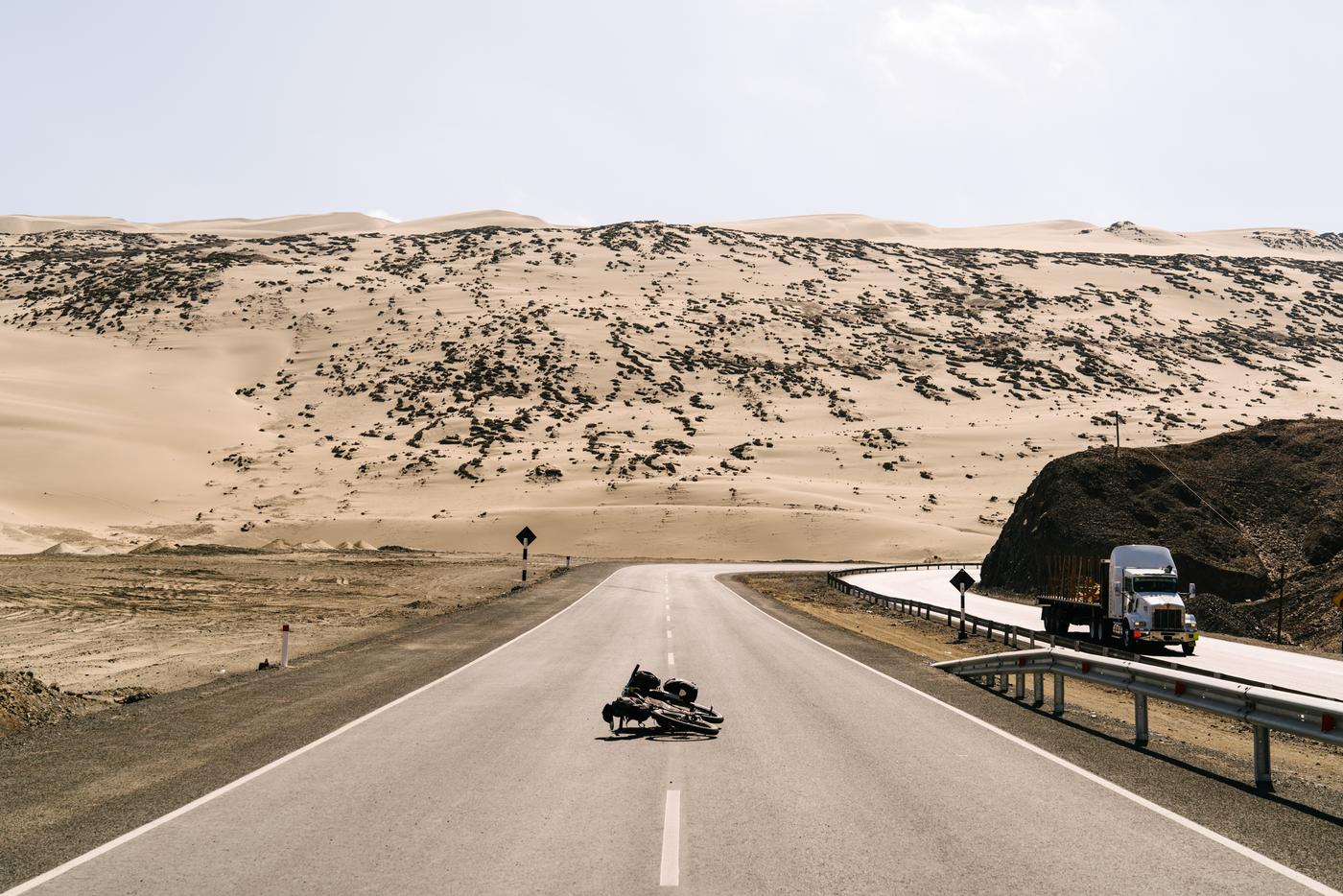 Fast forward a few weeks of delays and I was finally on my way to Peru. As the plane taxied toward the runway, the reality of everything really started to set in. This is really happening. All of the consistency that was in my life for the last ten plus years was out the window, and my new constant was the unknown. How do I get from point A to point B? Where do I find food? Where do I find water? Where am I going to sleep? It all boils down to the basics…

I arrived in Lima still not positive of where I was going head straight from there. I knew I wanted to return to the Cordillera Blanca that I visited last year, but I wanted to approach it from a different angle. I also had no desire to ride straight out of the traffic disaster of Lima, so I tossed around a few ideas at the bus station, and ended up deciding to head for Chimbote to be able to take the long canyon up from the coast. 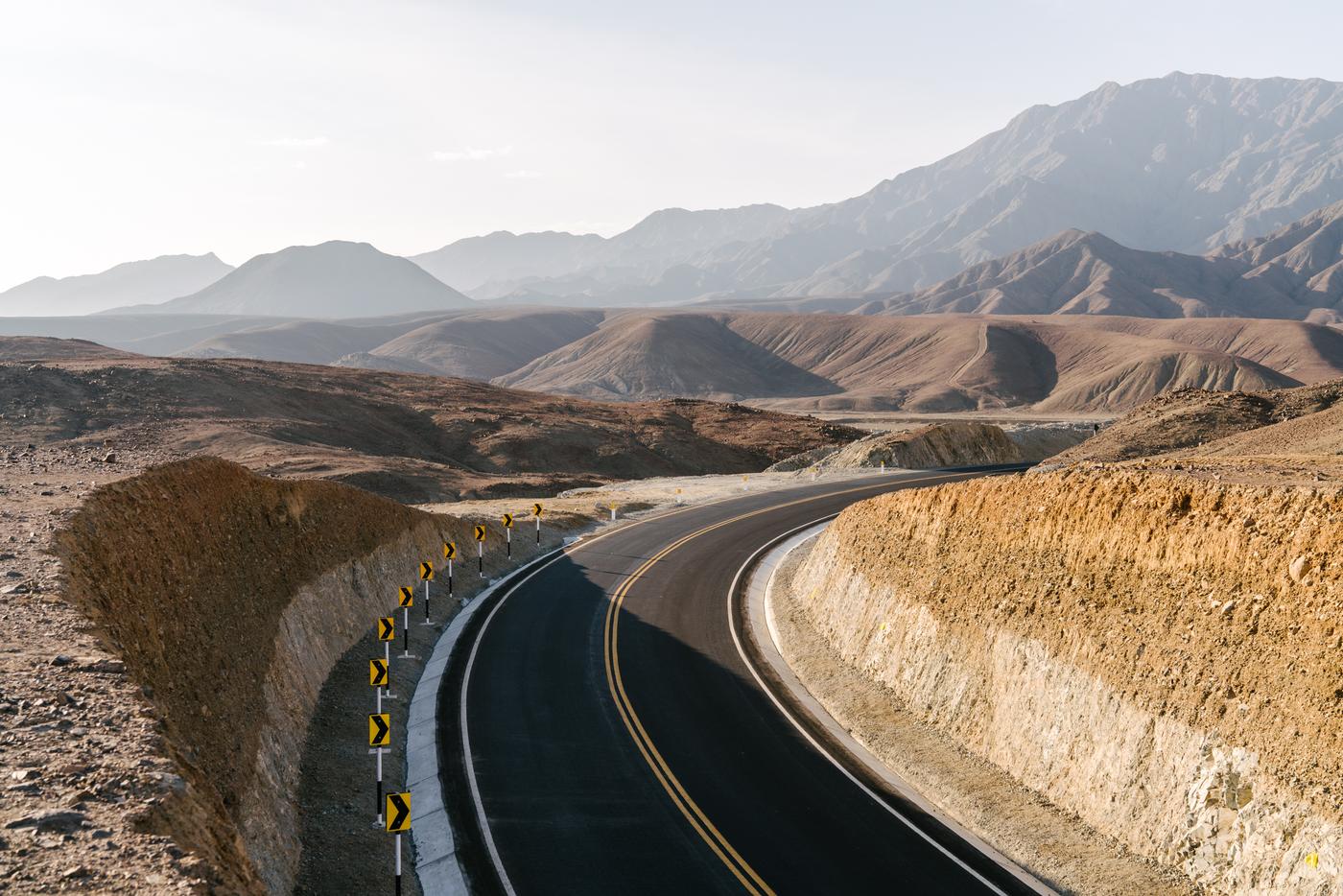 I set off north on the Pan-American highway in hopes that I could hook up with a dirt road that would connect with the road going the through the canyon. As luck would have it, one side of the highway was closed to cars, so the section of miserable truck-filled highway I was expecting turned out to not be so bad as I had two wide lanes all to myself.

Eventually I reached a quiet dirt road that slowly worked it’s way into Peru’s coastal range before the road I had mapped out suddenly ended and a fresh ribbon of pavement shot off into the hills in another direction. It wasn’t on any map, but I didn’t really have any other options, so I went with it. I am imagining this kind of thing will set the tone for the rest of the trip… Prepare for the unexpected, because that road on the map isn’t always going to exist anymore. Before long the sun was starting to set and I knew a small village on my map had to be coming up within 10 kilometers or so, so I decided to look for a spot to camp before I was going to be hitting a populated area.

Fifteen minutes later, camp was set up and within another fifteen my trusty Therm-a-rest had withered away and I was laying on the hard ground…. Another tone setting moment during my first full day on the road.

The sun rose early and I continued on, hoping to head through the town of Tanguche. This is the kind of classic small village that you find scattered throughout the Andes. Before it comes into view, you already hear the roosters, mules, and cows in the distance. With any of these villages there are always atleast a handful of kids lingering around to look on in amazement as some tall “gringo” with a beard comes rolling in on a big crazy looking “bicicleta”. To them, it might as well be a unicorn riding in on a rainbow. A quick stop at the one local shop to top up water and grab a few snacks, and every kid in the village had gathered around outside to see what was happening. A barrage of questions ensue, and even though my Spanish is limited enough to where I don’t understand more than half of them, these interactions are always some of the best moments of the day. There’s something endlessly entertaining about watching a little kid try to lift up a fully loaded mountain bike that is bigger than he is.

I continued up through the canyon, eventually passing through another village that was even smaller. This time a local and a member of the “Policia” spotted me coming in early, and I watched them immediately dart away as if they were looking for something. A few moments later and they come cruising out on bikes to join me for a few kilometers on a ride outside of town Again, the Andes draw me to the country, but it’s hard to beat the enthusiasm of the Peruvian people!

The next two days were an endless series of roads tucked deep in a gorge or chiseled into the side of a cliff with more tunnels than I could possibly count along the spectacular route through the Cañon Del Pato. Another bit of luck along the way had a bridge under construction which meant cars were only allowed to pass through for one hour that day… That hour had already passed, so when the construction crew let me walk my bike across on a loose pair of glorified 2X4’s, I had the road all to myself! I eventually reached the city of Caraz, where I could take a day off to enjoy some food other than the standard Peruvian onslaught of questionable meat with rice and potato. It also gave me a chance to ditch a bit of the extra weight and head up into the Cordillera Blanca for the first time to spend the night at the Laguna Parón Refugio, which sits at just under 13,800ft. The first trip up to altitude is always a rude awakening, but this was a perfect ride to get me ready for a rematch with the truly thin air of the Huascarán circuit, and that’s where I had my sights set next…