Practice makes perfect. After a string of late starts, mishaps and consequently even later evenings, our group pushed through the sleepless nights, finally hitting the road before 8am. It took a while, but so it goes in brevets like this. 2100km in 177 hours is no walk in the park, yet it doesn’t have to be a panicked sprint either. There’s a balance to be achieved and oftentimes, it takes a bit of on-the-bike rehearsal. 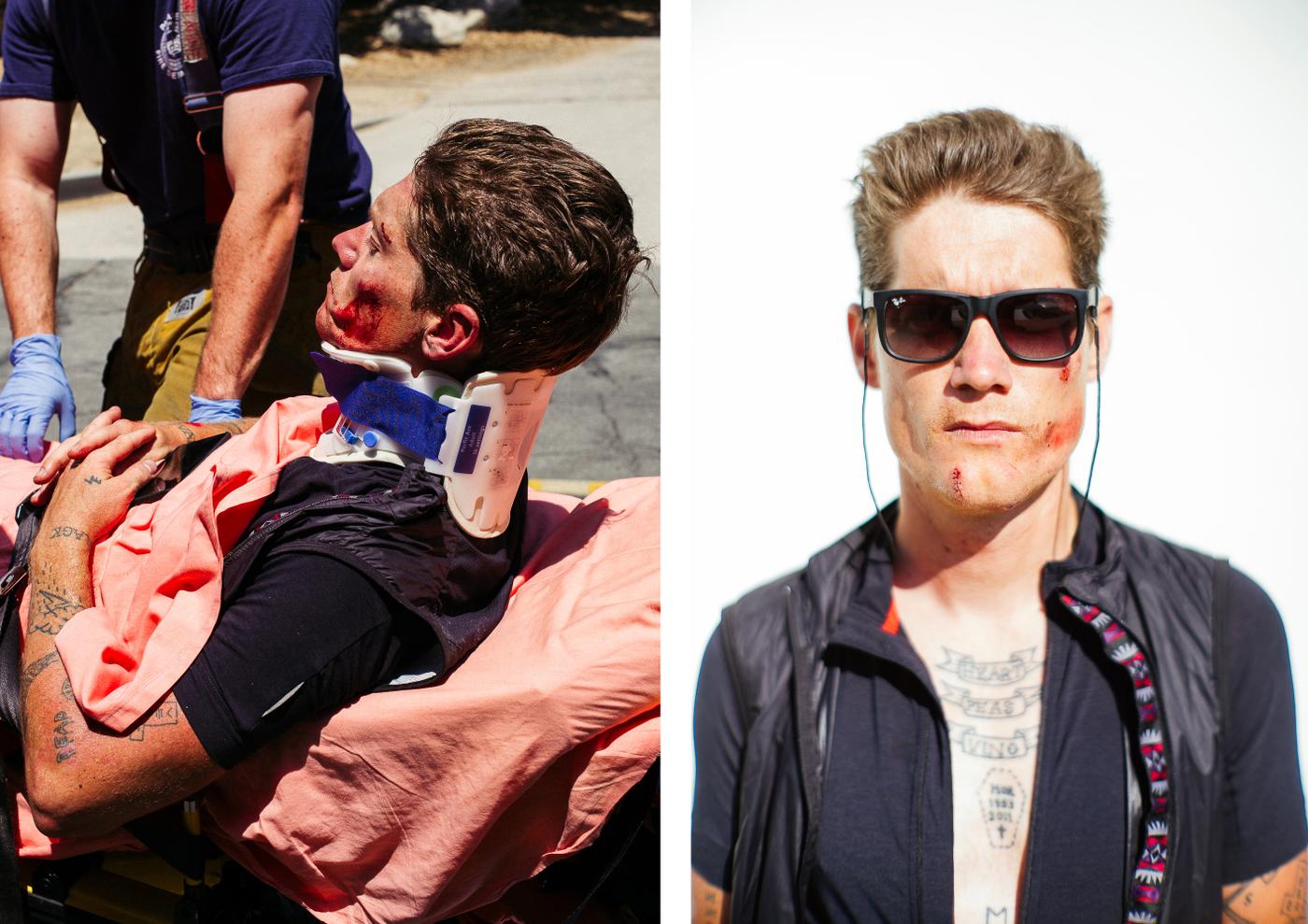 Undermining their struggle is not the intent here however. Erik had fought his demons on day two, before finally ascending the mountain of madness that was his own self-doubt. At one point, he literally began walking his bike, telling himself he couldn’t ride anymore. This is the man who, after cracking a rib a month ago on a ride, crashed into a dumpster, breaking yet another rib as well as fracturing his shoulder. Truthfully, if Erik had thrown in the towel, I wouldn’t have blamed him and it might have arguably made for a better story, or at least a few painful portraits. But alas, our man of steel looked at the message on his aero bars for inspiration. “Mind over body” they read and this mantra undoubtedly pulled Erik from the abyss of his own pessimistic introspection. After all, he couldn’t quit… 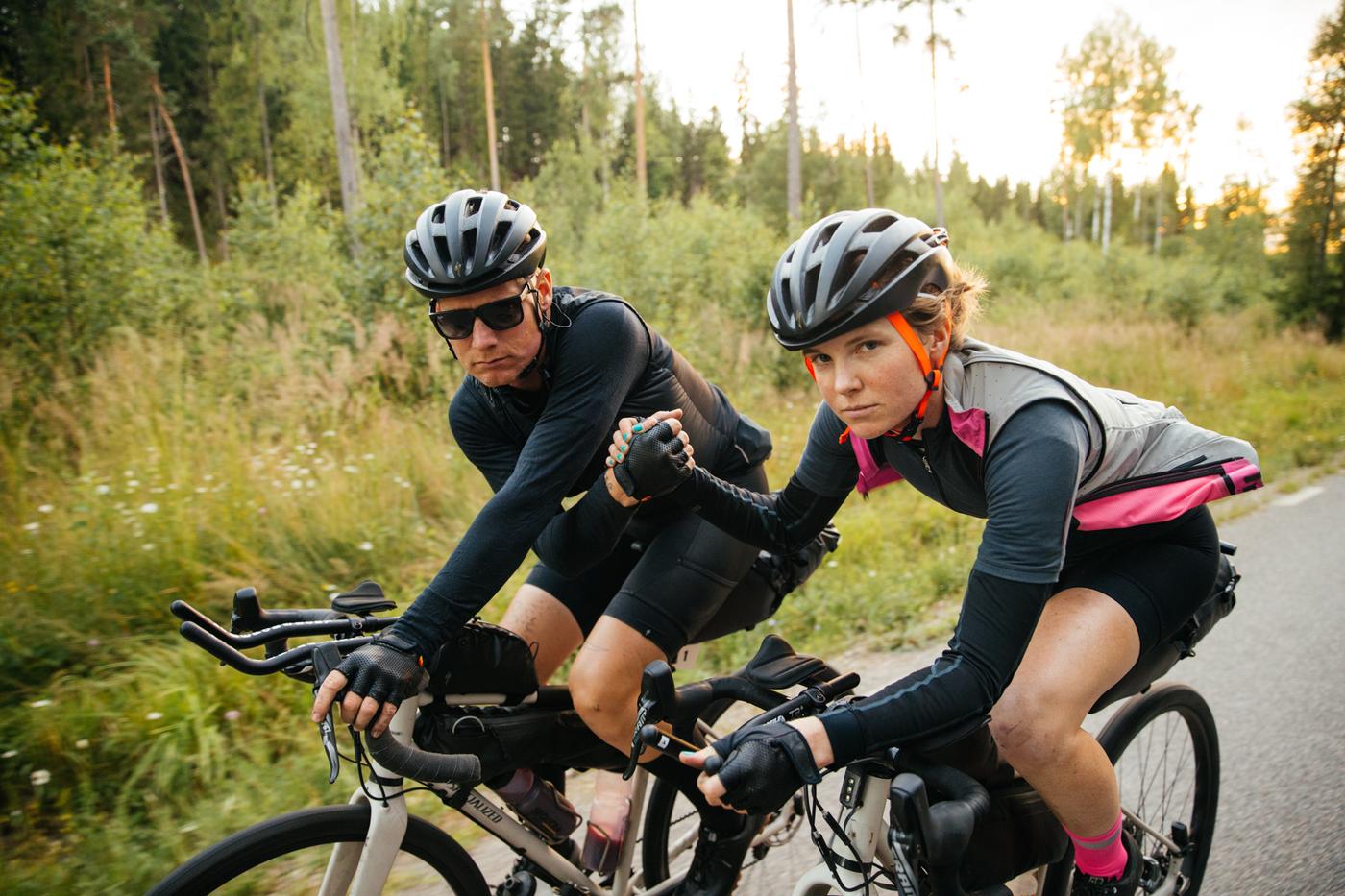 All the while he was having a breakdown, his two teammates, Rita and Kristian did their best to consul him, spoon-feeding doses of 100% vegan, artisanal, non-GMO positivity and encouragement. It was a literal breakfast of champions. Meanwhile, they too were fighting their own internal battles. Rita was practically falling asleep at the wheel on day four, barely able to keep her eyes open. She had only gotten 2.5 hours of sleep the night prior and wasn’t exactly storing extra juice in her reserves. Riding a bike for 20 hours a day takes its toll on your metaphysical self. Even on the final descent into town, she was dozing off. 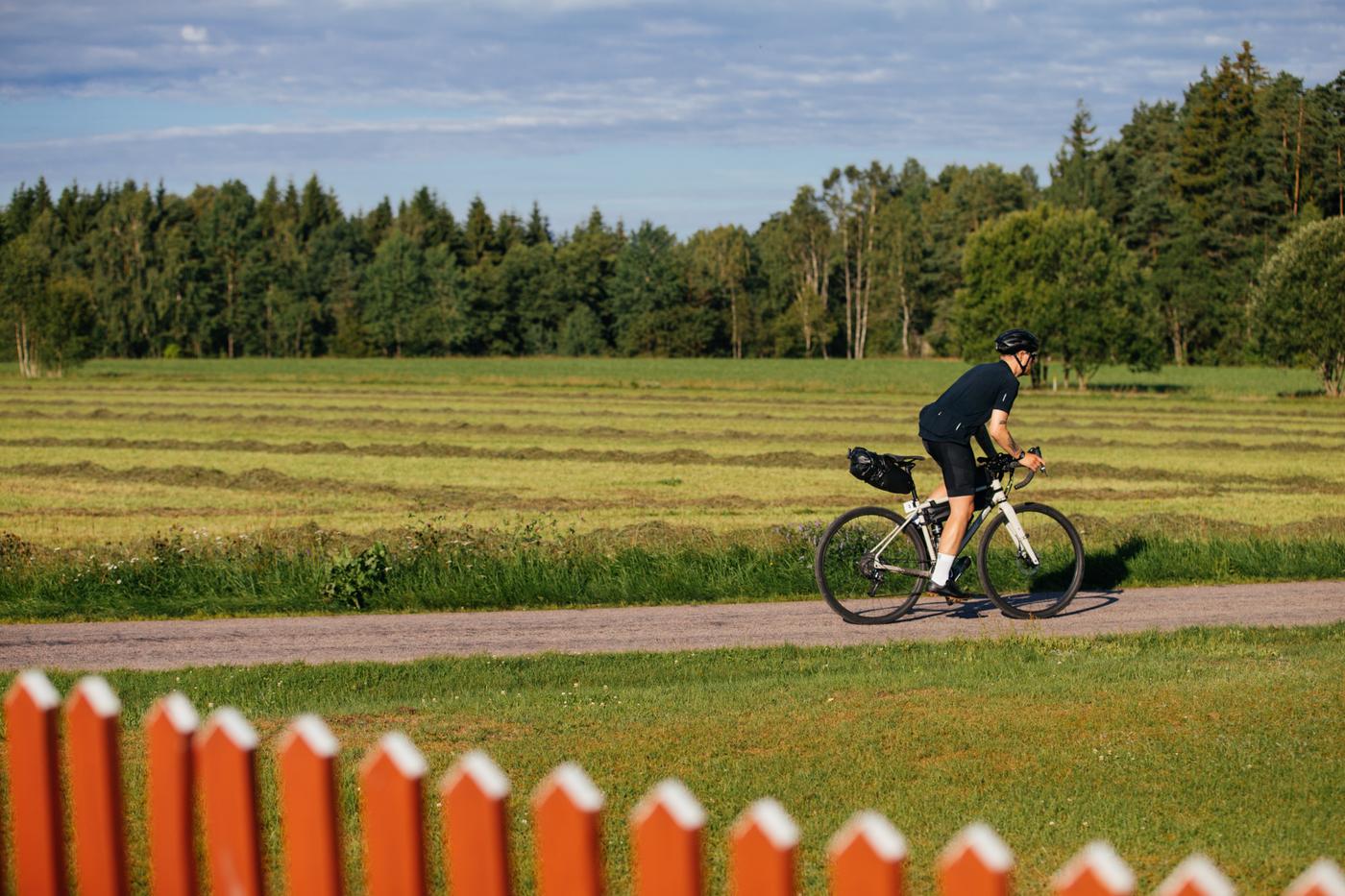 Kristian was suffering from arguably one of the most common ailments during brevets or tours: knee pain. He tried lowering his saddle, raising his saddle, changing cleat position and other bike-fit solutions to no avail. On the last day, it hit him. Hard. Like a great white shark exploding upwards, engulfing a seal, or a Swedish meatball rolling off an IKEA plate. After making a post on Instagram, a fellow Swedish randonneur offered some advice. Yet, he didn’t simply post a comment, he tracked down Kristian’s phone number from the brevet organizer and called him as we were eating lunch. His solution: take any cylinder and use it like a roller to stretch out the leg muscles. After 20 minutes of excruciating pain, on the floor of the super hip and homely cafe mind you, he was back on the bike, spinning his way up the climb. The last push: in which our heroes became alive

After nearly a week on the bike, the final 15k was in sight. The stage had been set. Kristian had dropped his wallet somewhere on the course (later he received another phone call from someone who found it and is shipping it back to him) and a few other snafus had separated the trio from the rest of the group, who decided to put their heads down and hammer to the coast. While that was tempting, Erik made the call to take a break and enjoy a cold soda. The dynamic had been weird that day and the team needed to take a breather. Besides, the sunset was only going to get better and even if they jogged the rest of the course, they’d still be completing the brevet a whole 24 hours ahead of the cutoff. With a crack of the soda cans and the rustling of a bag of snacks, the group had exorcised their inner demons. It was like their slates were wiped clean, leaving a polished, shiny coat of armor, having been hidden by the pain patina from the last few days. They were finally ready to achieve perfection. They had been practicing for almost a week now, after all. What followed was some fiery fairy tale shit. A sunset of proportions, staggeringly more colossal than epic. This was a juggernaut. An unmanned ship ready to plunge into infinity and our group was chasing its trajectory straight to the Baltic Sea. While the sun ignited the wheat fields, our heroes set it ablaze. After filling up on full nüked photos, we raced to the finish to witness the celebration. 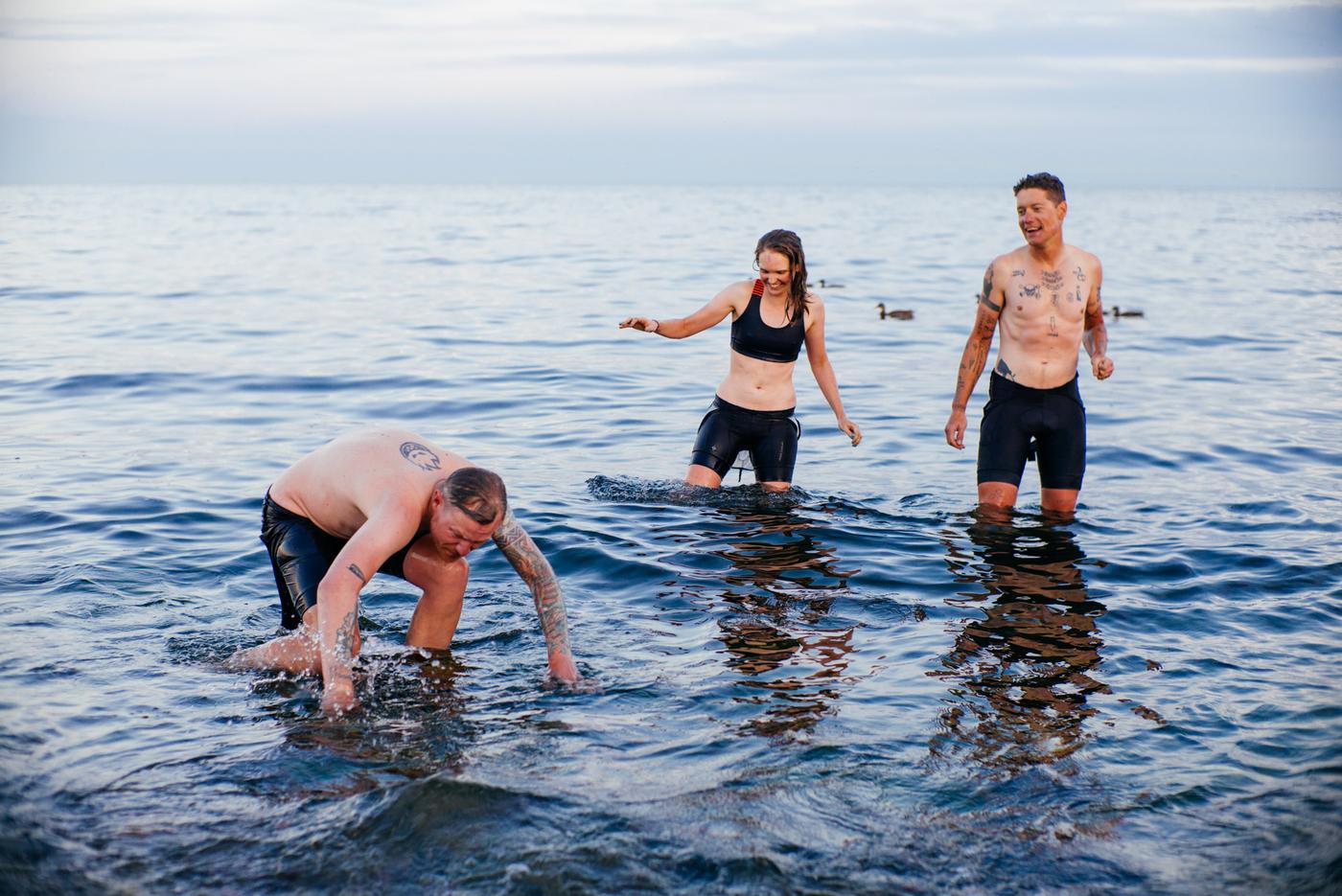 The southernmost point in Sweden is celebrated by a pathetic placard and one of those road signs that point you in the direction of popular cities. You know what I’m talking about. For such a beautiful country, filled with rich design and a strong heritage, this Busch League signage was underwhelming to say the least. By contrast though, the Baltic sea looked welcoming. At least after 2100+ kilometers and 156 hours on the bike. The three of them took off their salt-stained jerseys, crusty socks and soiled shoes before making their way across the mine field of sharp rocks and into the cool blue waters, currently being illuminated by that color-cascading sunset. Watching them walk out of the water, on all those slippery rocks was pretty damn amusing. Our hostel for the night was adjacent to a lighthouse and quite cozy. Yet with the sun rising at 3am, we all found ourselves waking up on brevet schedule, before scarfing down food, consuming coffee and exchanging tales about how well we’d slept the night before. From there, bodies began to sprawl out in the sun as the landscape around us started to look picturesque as ever. 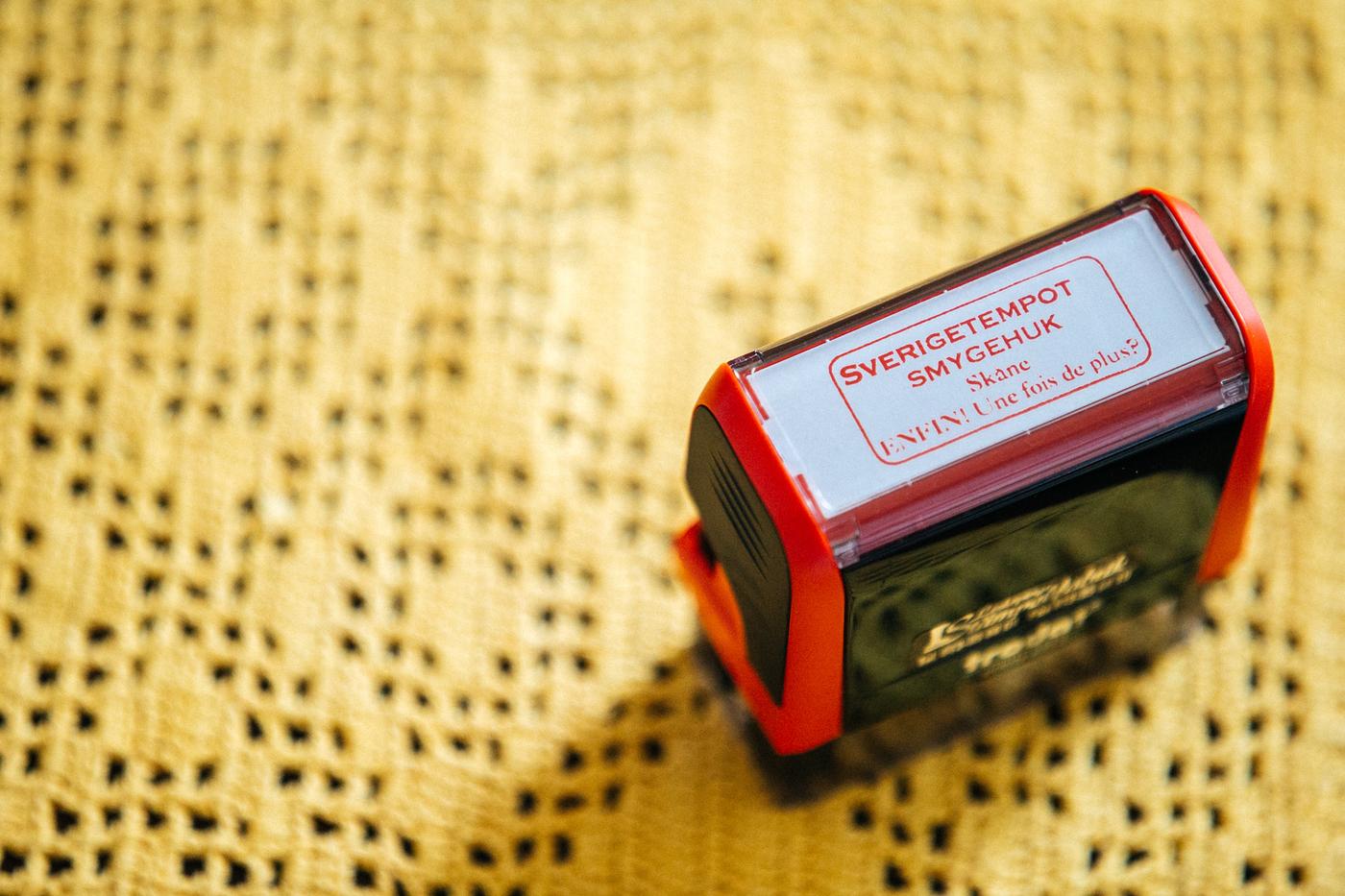 Well, with these closing paragraphs, the Sverigetempot coverage comes to a close. This event pushed not only the riders, but those chosen to document their journey. I think I speak for the video crew @ErtzuiFilm and the journalist @Aarongulley when I say this was one of the most challenging events to document. It entailed ten days of travel, with 5,000km logged by car through the Swedish countryside. All we (mostly) ate was pizza and listened to podcasts. It was physically and mentally demanding, even I succumbed to injury, smashing my knee cap on a rock while running to set up a shot. Sympathy injury? Perhaps.

As I’m in my hotel now, I can look back at all the times where I lamented about the documentation of this brevet and honestly say it was one of the most beautiful things I’ve ever been able to witness. Sure, the long days in the car sucked for me, but this event is not meant to be experienced by automobile. It’s a journey propelled by human-powered, two wheeled machines, who we’ve come to rediscover time and time again, are only limited by the will of their pilots.

Many, many thanks to Peter, the organizer of the Sverigetempot for putting together such a stellar event and everyone who made this trip so memorable. I highly encourage all you randonneurs and endurance athletes to enter this brevet, experience Sweden and discover yourself in the process.

For the race course, refer to the following links:
Section 01
Section 02
Section 03