Coming into Bolivia, it’s hard to know what to expect. Where Peru’s reputation is pretty much all happy people, ancient ruins, and fluffy alpacas, the stories you hear about Bolivia prior to visiting are a bit more of a mixed bag. Some are very positive, but one thing repeated pretty often (other than how bad the food is) is that outsiders aren’t quite as popular with the locals. Rather than the welcome party you get in nearly every village in the Peruvian Andes when you roll in on two wheels, the Boliviano response is a bit more tepid… At least that’s the reputation. 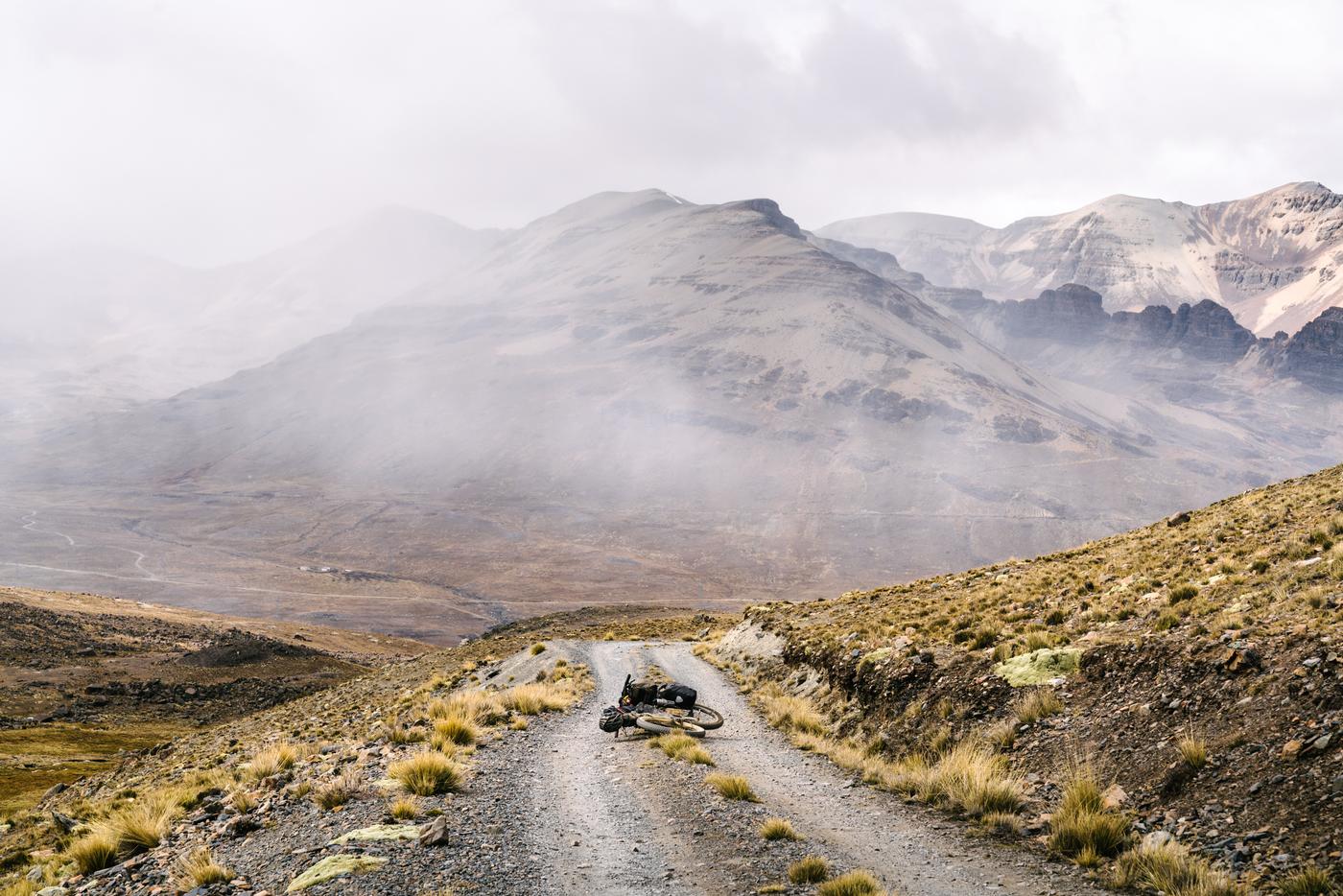 Either way, for one reason or another, many cyclists riding through South America simply race across the altiplano, check out the salt flats, and get to Chile as soon as humanly possible. For me though, the diversity of the Bolivian landscape and the opportunity to traverse rarely visited roads and trails make it too intriguing to not dive a bit deeper. So, for the next few months I’ll be sharing photos and stories from a variety of Bolivian locales, starting with the Cordillera Real and a mountainous region on the edge of the Bolivian jungle known as the Yungas… After spending the vast majority of my time in South America so far at altitudes well above 10,000ft, and clinging to the always spectacular glacial cordilleras whenever possible, I figured it was time to switch it up a bit and make my way toward somewhere a bit warmer. Starting from the mountain metropolis known as La Paz, this would lead me up and over the frigid Cordillera before plunging 11,500ft down arguably the most infamous road in the world, known as “El Camino de la Muerte” or the “Death Road”.

Of course, probably the most “eventful” night of the entire trip so far happened before I ever even hit the famed stretch of road… When a calm evening camping in the Cordillera Real quickly morphed into an apocalyptic wind storm, sandblasting my tent with any kind of debris it could pick up from the ground nearby. In the process, constantly ripping out my tent stakes and moving me a good 15 feet over the course of the night. With no shelter from the wind nearby, I was left to simply spend the night bracing the tent walls until the wind calmed down. 7am… 8am… 9am… Sadly, that time never came. It just got worse and worse, to the point where I couldn’t even keep the tent from collapsing onto me with my arms and legs adding support from the inside… I’ve been through a hurricane before back when I lived in Florida, and this felt something like that except it was a cool 10 degrees below freezing outside, and I wasn’t in my cozy college apartment.

Eventually I decided I had to do anything to get of this damn mountain, so I balled up my tent as good as one can with everything in it still and just went running down the hillside, hoping to find something— anything to block enough wind to let me pack everything up. Of course, aimlessly running around a rocky mountainside with an ultralight tent filled with about 30 pounds of gear is NOT a fantastic idea, so before I knew it, I looked down and saw stuff pouring onto the ground and getting swept away with the wind… (RIP down booties). Sure enough, there was now a giant hole in the bottom of the tent. After about a mile and a half of scrambling around and yelling my full vocabulary of obscenities at the earth, I found a small shack that blocked just enough wind to get everything sorted. My eyes were sore from a total lack of sleep along with a couple hours of squinting through dust and snow squalls, plus I was seriously dreading the thought of really assessing the damages to find out what else may have disappeared into the windy abyss out of my tent’s new trap door. Luckily, an impending descent of more than two vertical miles has a way of boosting your spirits pretty quickly, so these thoughts were pushed to the back of my brain before I knew it.

To be honest, when I first arrived in La Paz and saw the seemingly infinite number of “DO YOU HAVE WHAT IT TAKES TO SURVIVE THE DEATH ROAD?!?” mountain bike tour agencies all over the place, my tourist-shit-show concerns were pretty high leading into this section of the route. The road was at one point the main passage from La Paz to the Amazon, and with sheer 2500ft cliffs, constant thick fog, unstable ground, and two-way kamikaze traffic along a single narrow lane, it claimed 200 to 300 lives on average per year. That’s what earned it the ominous nickname, and gave it notoriety as deadliest road in the world… That is, until a wide paved road was built nearby. Now it sees almost no vehicular traffic, so the danger factor is pretty much limited to inexperienced tourists shuttling down it on crappy rental bikes. Thankfully, I somehow managed to dodge most of the tourist herds, and had the vast majority of the 65km descent all to myself. In that context, I can say that this section is absolutely not to be missed. There aren’t many places where you can go from an actively snowing mountain pass to the tropical heat and humidity of the jungle in one shot. It’s definitely one of those experiences where you finish the day and your brain can’t really comprehend where you started it.