Taking on the #FlowShiv
Photos and words by Chris Riekert

Here in the hallowed halls of the big red ‘S’; you know, the Death Star of the cycling world… you might be surprised to see there are some real people roaming around. Real people that are, first and foremost, big fans of bikes.

People like my buddy John Friedrich, the only man I know who would happily talk about the different weights of DOT brake fluid and what they offer to the rider, literally, until you’d choose water boarding over continuing the conversation… Or like our mechanic Patrick “Tree” Miller who seems like someone delivered to earth in one of those rescue pods shot through space as the planet Krypton went through nuclear collapse. Patrick is the NICEST most willing to help person I’ve ever met… and yes, he is a bicycle mechanic! How about that?

Another surprising person, is Brian Szykowny… or as we call him… because nobody can figure out how to pronounce a name starting with S-Z-Y, Swiznooski. Swiz joined the ID team here at specialized around a year ago with the motto of ‘make cool shit.’ He’s always willing to stay afterhours to work on something fun or out of the commercial hopper. You may remember the S4 (Specialized SWorks Selfie Stem)? Well that was Patrick Miller’s idea and Swiz’s execution. He slaved hours every night for a week to weld an aluminum rod to a stem plate, bondo and shape it to perfection, and then give it a deep mirror paint finish totally appropriate at any event labeled “concourse”.

So that brings us to this project… the much anticipated #FlowShiv.

Swiz came to me with the idea of showing the actual aerodynamic pressure and flow map of the Shiv TT painted on the bike. At this point in time, before the prep had started I vividly remember him saying, “yea! It’ll be totally easy!” 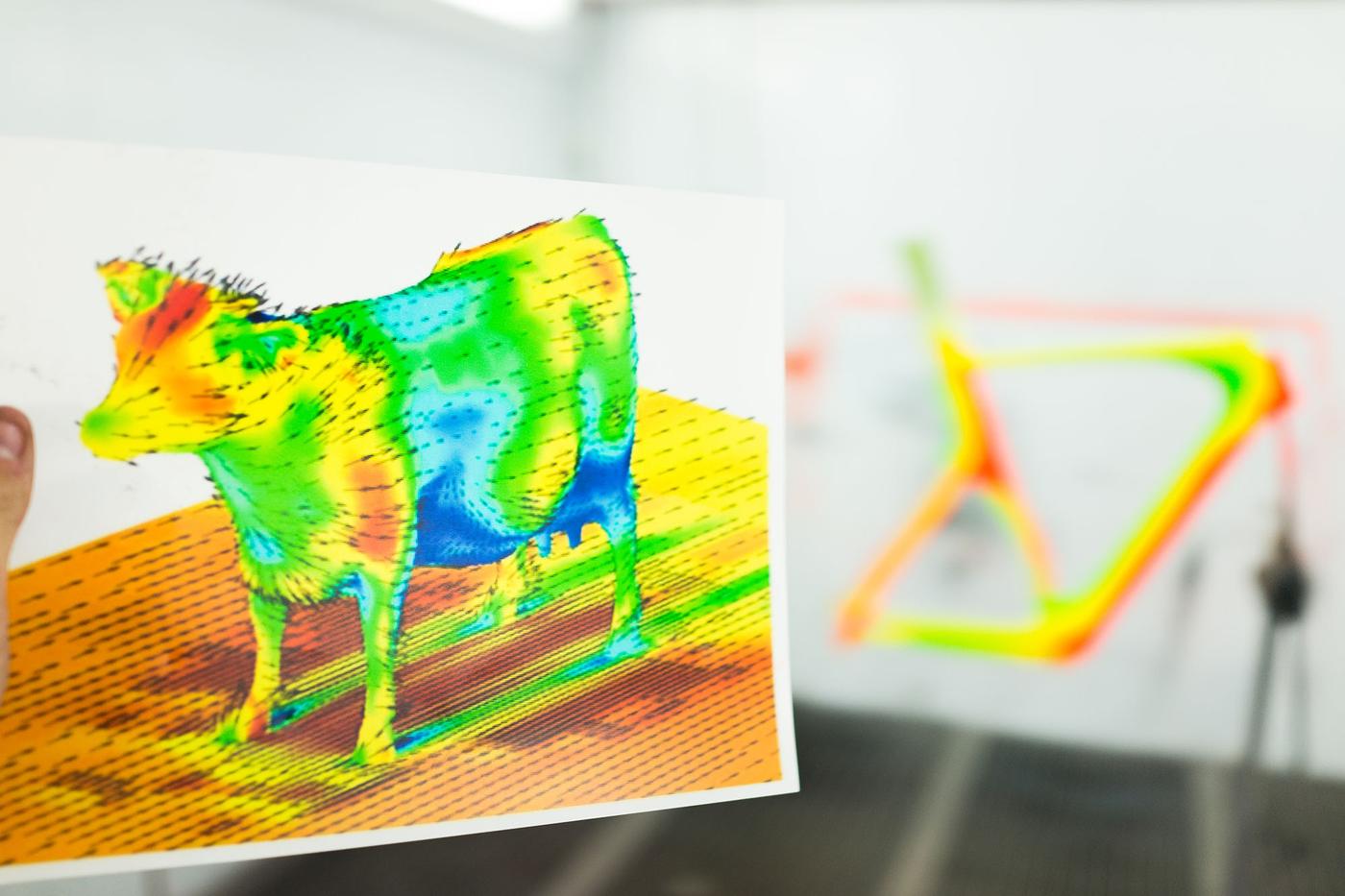 Swiz worked with Specialized Aerodynamicist Chris Yu (@ChrisYuInc) to define the pressure and flow maps thus putting to work the thousands of dollars of super computer fluid dynamics soft and hardware so that we could “Instagram the shit out of this project.” On the bike, the color represents how much pressure is applied to the frame with red indicating high pressure and blue indicating low. In addition to the color, the lines flowing down the model indicate the direction air travels as it moves front to back. An interesting point to note, look at the lines moving over the DT, air hits the front of the tube and then as it moves over the shape, it flows toward the BB. Small things like this come in to play when we are designing new aerodynamic gear. We try to minimize pressure and direct air to places where it can smoothly separate from the bike or rider to lower drag and speed up the product. #sciencebro. 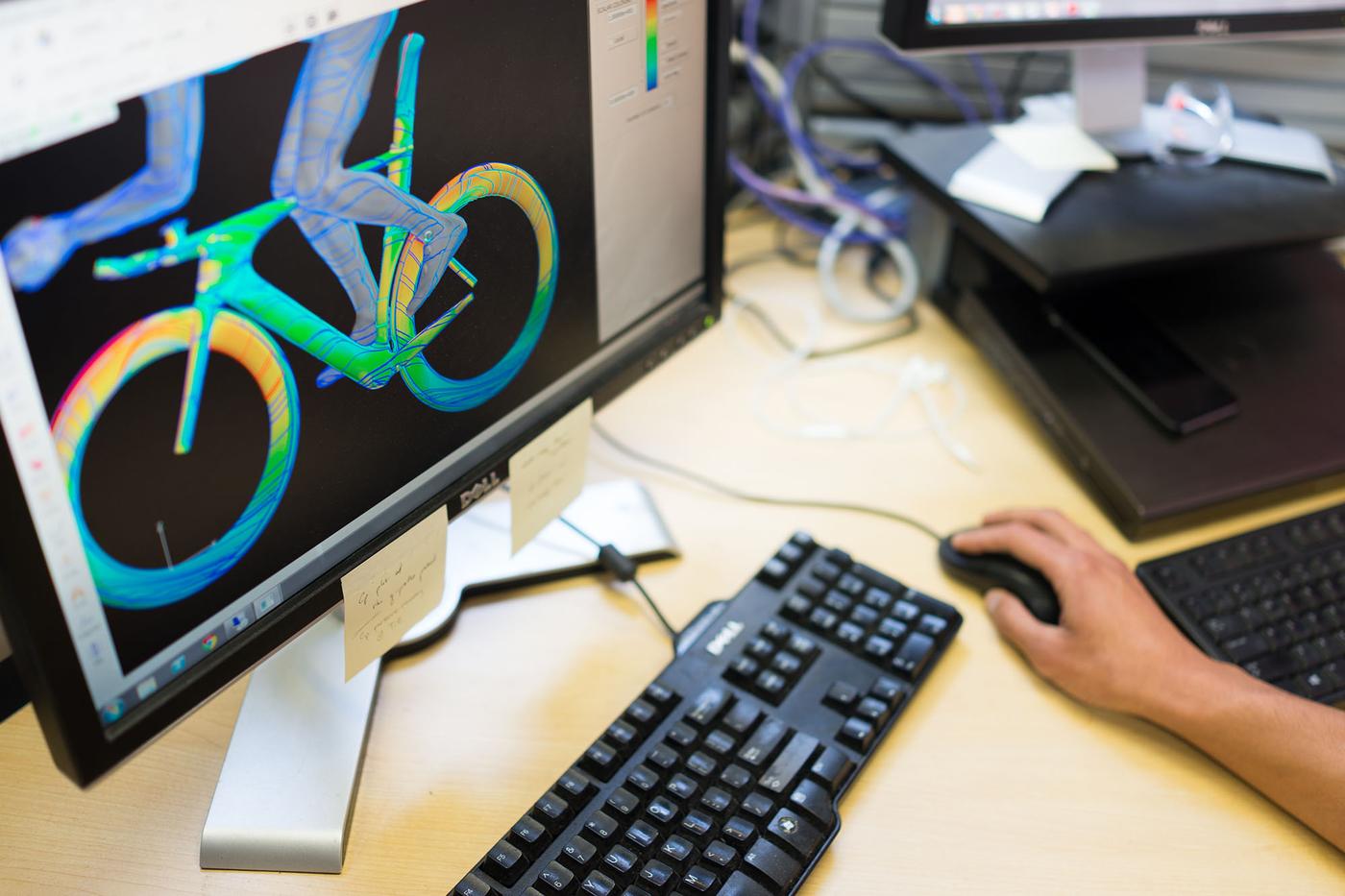 As a side note, Chris Yu is a smart man. He started with Specialized in 2012 and his very first project with us was

Since then, Chris has graduated from his Stanford PhD program in aerodynamics thus dawning the title, Dr. Aero. Paint was a long…LONG… process. From masking, to primer, to flow colors, to masking, to painting, to weeding, to clearing… This entire project took over a month after hours. Take some time a look through Brian’s hard work in the attached gallery.

Leave a comment if you have an idea for what we should paint next!