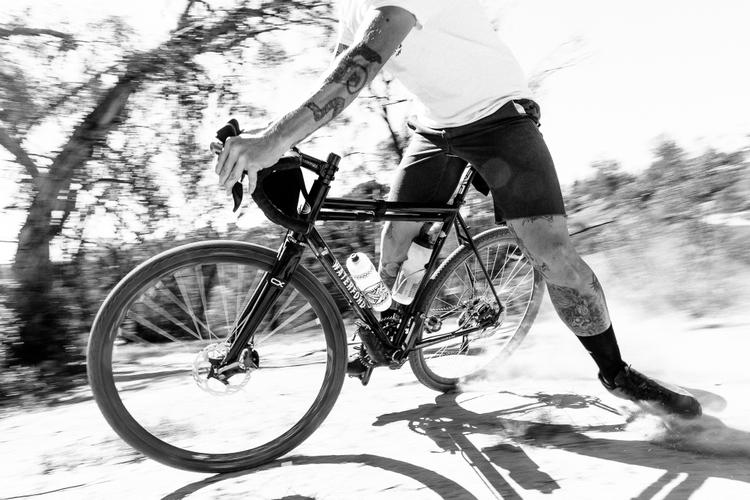 Gunnar and its parent company Waterford don’t get a lot of attention in cycling media, unfortunately. In fact, I rarely see one here in California or if I do, it’s in passing and there’s no time to shoot photos of it. So when Pat rolled this beaut into Golden Saddle one afternoon, I wanted to do something special with it. I knew exactly what Pat was going for when I saw this bike. It has a body language, a certain air of confidence. It screams, “I can tackle Mt. Lowe on dirt and still be fun descending back down the smooth, paved curves of Highway 2.”

In Los Angeles, big tires and disc brakes can completely alter your everyday rides. We’ve got legit mountains here, breaking 10,000′ but between the ocean and these giants, there are tons of intermittent trails, some of which were cut by cyclists, or hikers, or hobos. These trails can offer more than enough entertainment right out of your front door if you can’t commit to a huge day in the mountains. That became the backdrop for where Pat and I would ride, shoot photos and eventually document this Waterford.

Initially, Pat didn’t want a Waterford. He wanted a Gunnar Grand Disc but after discussing all his add-ons and customization, they recommended he just get a Waterford. Their frames begin at $1,500 and go all the way up to however much accoutrement you’d like to add. Custom geo, check. Pump peg, check. 44mm head tube, check. Disc brakes, check. Custom paint, check. Clearance for a 40mm tire, check. When Pat gave them his list, the team at Waterford got to work and a few weeks later, the frame showed up, ready to rip Los Angeles and beyond.

The build kit is smart, without being flashy. An Ultegra long-cage wraps around the 32t cassette and White Industries VBC cranks make up the right amount of gear inches. King Hubs to HED Belgium + rims, fit with Teravail Cannonball tires keep the bike rolling and a Cambium atop an ENVE post offers some compliance on the saddle. A Thomson stem and 3T bars hold the Ultegra shifters. Yanco outfit this rig with some custom bags, including the DT stash pack and handlebar bag.

Now, Pat’s lived in LA his whole life, but only recently became interested in riding dirt. Perhaps you remember his bright LOW track bike? Yeah, he wanted something a little different than that for his new geared bike. As for his dirt riding, I think he’s got the hang of it.

Thanks for riding, shooting the shit and skidding around loose corners, Pat!

River City Bicycles has more than a couple beautifully unique bikes in their shop. Here’s just one of many in their new Bike Collection video series, a Waterford CX…

When some design companies sell cycling products, they just slap a label on some Taiwanese blanks, but House Industries isn’t just anyone. They’ve done an amazing job, sourcing products that were made domestically. From PAUL, to Brooks, Tanner Goods, King Cage and even Waterford-constructed framesets, the House Industries Velo Collection is filled with products that will last a lifetime.

… and as I just found, it’s hard to not add a lot of it to your check out basket!

Sky is one of my favorite people in the industry. She’s a life-long badass, who’s been behind the scenes for some of the most influential cycling projects. I’ve enjoyed getting to know her over the past few months and if anyone knows the ins and outs to making products in the US for the cycling industry, it’s her.

Here’s a video from Shinola, highlighting their work with the oldest bicycle manufacturer in the USA, Waterford.