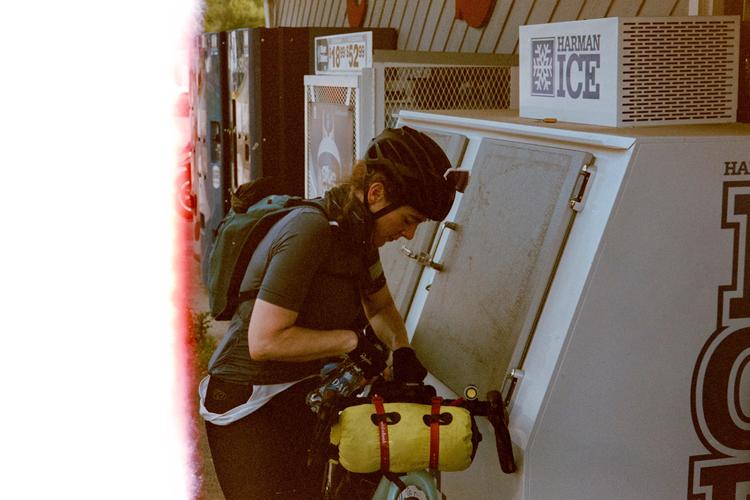 I like to shoot the first frame on a roll of film no matter how carefully I load the roll I always end up getting something kinda strange and wonderful out of that first exposure – an effect yielded by the film’s interaction with light coming from two separate moments in time and space – the exposure of the film through the camera’s shutter, but also the light leaked onto the frame during the loading of the roll. One of my favorite photos ever is of my 17-year-old beagle/spaniel mix, Bucky, where he looks like he’s peeking out from behind a cascading sheet of liquid sun. The first exposure on this roll is of my friend, podcast co-host, and riding partner, Sarah rifling through overstuffed bikepacking bags outside of a country store in Damascus, Virginia about 15 miles into our 550-mile bikepacking trip through the mountains of Virginia and West Virginia. The image of her trying to squeeze a snack bar into a nonexistent empty space in the top tube bag is itself neatly constrained into the 2/3rds of the frame not devoured by light exposure obtained while the roll was being loaded.