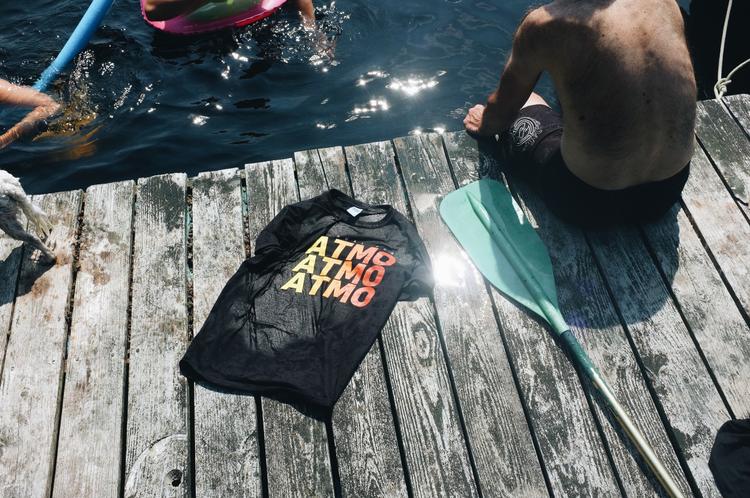 Last year, Dan showed us Richard Sachs’ house and studio just before cross season began. Richard calls this weekend “Team Camp,” yet it feels more like a family visit for Dan. This year, Dan returned to North Massachusetts to visit RS once again and wrote a piece about it for his Cross Column.

Check it out at the Athletic. 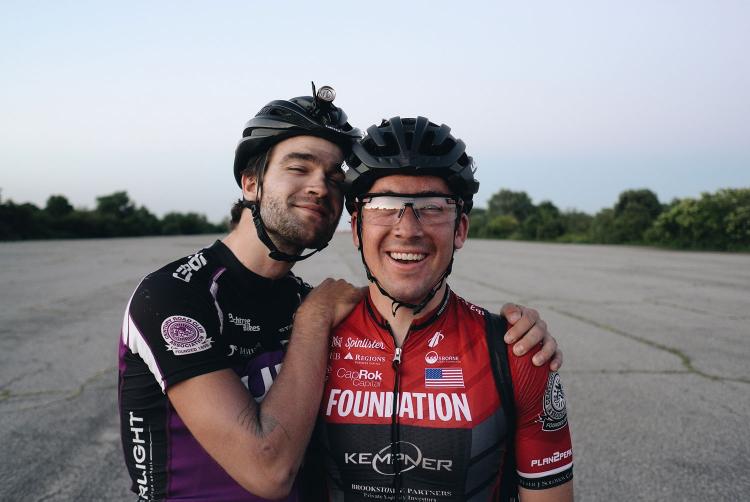 This series is going to be so good. Professional cyclocross racer Dan Chabanov is writing a weekly column for our friends at the Athletic, aptly called “Cross Column.” Head over and check out Week One now!

Over at the Athletic, they’ve been inspired by their popular La Cubiste socks and turned the design into two jerseys. A Blue Magic design and a hot pink “collection” which comes with a cap and socks. Head over to the Athletic to check out their full apparel offerings.

Think about what we use our personal or sick days for? Dumb stuff. Staying home sick (or if you have kids you stay home when they get sick), going to the doctor, going to the DMV, jury duty, visiting in-laws, funerals, etc. Question: What do all of these things have in common? The Answer: None of them are fun. Sure, you can schedule your vacation time around whatever events you want but what if you really just want or need a single day to get your head right? Can you just tell your boss “I think I am going to skip tomorrow and ride my bike locally all day with some buddies. Might do a little swimming too. Fuck it. Maybe even grab tacos after and watch the sunset.” Some of you have awesome bosses but the majority of us are afraid to take a day off for ourselves…

I’m all for helping people out! The Athletic is helping out Aaron in Portland with these Tigre Noir shirts:

“”Crashing bicycles is expensive.” Heck yeah it is. That’s the hashtag that our friend Aaron has been using a lot in the past couple weeks. He had a nasty fall from his bike, then a pleasant ride in a helicopter (there were drugs) and now he’s on the mend and about to head back to work. But that doesn’t mean there wasn’t bills…so many bills! We thought maybe we could help.

Now, Aaron has also been hounding us for quite some time to make a grey on black version of our friendly little tigre, so we decided that this might be the right time. Plus, he only wears black and only shoots black and white photos, so, what could we say??

NOTE: We will be donating $10 for every shirt sold to Aaron’s bills fund. If you would like to donate further, head over to his GoFundMe Page » Aaron Vs. T6. Every shirt comes with a “Yo Thanks!” decal that Aaron has provided as his way of saying thanks for the support. ”

Pick one up at the Athletic. 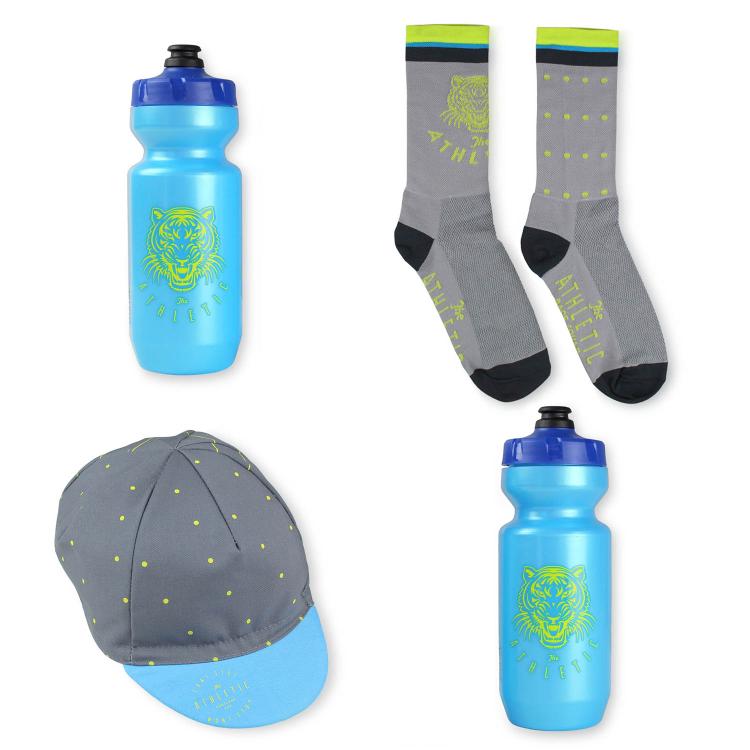 Portland’s the Athletic kicks into summer with the return of the Tigre. Now in new colors of their bidon and cap form to accompany their socks. Pick up either the entire pack or each individual item at the Athletic. 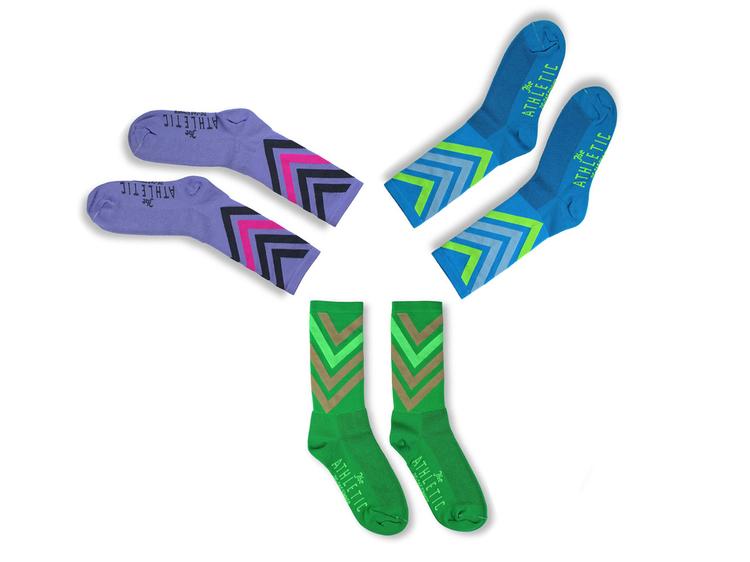 Portland’s the Athletic has been keeping on top of the summer vibes with their newest releases. Bright, vibrant colors will match everything from your favorite running shoes to your brand new cycling kicks. Their popular Zig Zag series got an injection of summer hues including green, blue and purple.

Head over to the Athletic‘s new website to poke around.

The Athletic in Portland has a brand new website, with extensive product photos, a revamped web shop and an online journal, featuring ride snacks and other observations. Head on over to check it out!

The growth of a brand from an idea on social media to a brick and mortar store is always inspirational. For Portland, Oregon’s the Athletic, their brand began with a simple idea; designing socks, and has transformed into an entire retail space nestled in NorthWest Portland. In the few years the brand has existed, they’ve released dozens of designs online. Their most notable being a pair of turquoise 6″ tall socks embroidered with the PDX airport’s carpet pattern.

While their PDX Airport Socks might be their most famous work, the Athletic has worked with a number of small companies, as well as cycling teams to create that last essential piece of their cycling wardrobe. While most of their stock just so happens to be, you guessed it; socks, a lot of what the Athletic is doing reaches beyond that.

As the name implies, they are showcasing a particular façade of sports. Not necessarily the most current team’s rankings or franchise gear, but the art and culture that is inspired by athleticism. With zines, posters, bags, jump ropes and even a few pairs of Nike shoes on display, the Athletic’s storefront is more of a gift shop for the sporting enthusiast than it is a standard-issue sock store.

See some photos of their space in the Gallery and swing through their shop if you find yourself in Portland, or browse their stock online.

Continuing their Velo Collection, House Industries teamed with the Athletic on a Velo Check wool sock pack. Three pairs of wool socks with a 6″ cuff, made in the USA for $70. Pick up a set at the Athletic.

One of my favorite companies, with one of my favorite designs and on a favorite product. The Athletic’s Tigre Time design in hot pink is now available on American Apparel sweatshirts. Scoop one up at the Athletic and dare to look as bad ass as Julie does here!

Just in time for Nationals, the Athletic dropped their collaboration with the Richard Sachs Cyclocross Team. Available in four colors, designed after each of the team’s bikes and in stock now at the Athletic.

The Athletic’s tigre logo looks great in turquoise and even better on a sweatshirt. I did laugh a bit at the product description:

“When it comes to sweatshirts, the American Apparel California Raglan is our go to. It has been used by some of your (our) favorite brands out there. Big names in the industry like Golden Saddle Cyclery and the Team Dream Sunset Chasing Team. Teal and Blue have been a little bit of a go to for us as well. Put a tiger on it and there you have it. ”

Head over to the Athletic now to pick one up!

If you’re a fan of the Shining, you recognize this pattern off the bat. Portland’s the Athletic pays homage to the man himself, Stanley Kubrick, with some of horror’s most memorable carpet.

Pick up a pair of Redrum socks at the Athletic.

Jeremy and Julie from the Athletic have been working on a storefront over the past few weeks and it’s finally ready to open. This weekend is the official grand opening party for Portland’s The Athletic, so if you’re around, don’t miss out!

Sometimes, the simplest designs are the ones that become favorites. You don’t even have to explain the inspiration for the new Elevation wool socks from the Athletic. We get it. Available in Plum and Royal.

The Athletic are doing their own kind of cancer awareness in October. They’ve done a pair of socks with Cait, which you can pick up at the Athletic and read up on the story here:

“Our friend Cait — you may know her under the moniker @attnkatdaley — had a knock down drag out fight with cancer a little while back. One of the things that she used to help guide her through the dark days was the moniker “You Got This” which she had tattooed on her body as a reminder. Read the story behind it here » What “You Got This” Means To Me.

Her friend (our illustration hero) Chris Piascik did the lettering, which he always does well. ”

Man, I feel like this collaboration has been in the works for ages. Two of my favorite artists, working together for one rad brand, the Athletic.

“Brian Vernor and Chris McNally teamed up to make these fantastic t-shirts. This isn’t the first time that these two have teamed up together, but it is something that they have been talking about for a while.

Aaron Bradford and Vernor set out to make this one at Wilder Ranch in Santa Cruz. Just as Brian and McNally did with their other shirt at Townsley Tunnel.

These are the spaces we ride all year round on cross bikes. In the North Cal. it is always cyclocross season, the terrain dictates it.”