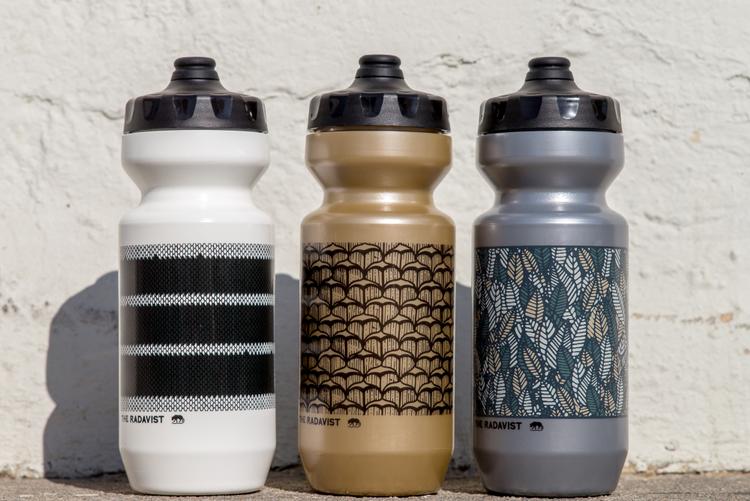 Red n yellow kill a fellow… As a youngster who spent a lot of time in the woods of North Carolina hunting down snakes, this saying resonated throughout my pre-pubescent mind. As an adult who still spends a lot of time in the woods, when I see a colorful banded snake, it’s the first thing I recollect. While the coral snake rarely claims any victims, barring the occasional drunken fool, these snakes are the most venomous in North America and in many regards, the most beautiful. The Texas Coral Snake is a completely different subspecies from its other North American family. The main difference is, it tends to wear more black…

Paired with this colorful bottle is a Opuntia cactus, commonly called the Prickly Pear, it too can leave you with some puncture wounds if you’re not careful. My run-ins with these plants occur more on the dinner plate that tire sidewall however. Nopales is a standard-issue taco option here in Texas, so order it up next time you’re ’round these parts. I wouldn’t dare eat our slithering friend the Texas Coral Snake.

Inspired 10% by Clerks and 90% by Odin’s animalistic warriors….

One of my favorite stories from Norse Mythology relates to nature’s impact on man. Scandanavian warriors would often wear the skin of a bear or a wolf before entering battle, resulting in the spirit of the animal possessing them in battle. As Odin’s personal army the Berserkir were known for ferocity as well as loyalty as they fought for the pack leader. In fact the Old Norse word berserkir, literally translates to “bear-shirt” and was soon called “going berserk.”

Venturing into the woods, be it during an expedition, or just an everyday ride, we too can find ourselves transformed. Every time we push ourselves on the bike, or subsequently find ourselves pushed off the bike, we grow – #RubberSideUp. This introspective experience not only shapes us as riders, but it continues to strengthen our relationship with nature. If anything deserves respect, it’s the woods.

This image of the Berserkir, or Úlfhéðnar, is further empowered by the Norse protection symbol, the Vegvísir, which is a direction sign that enables you to stay the course without being lost. Something extremely beneficial to cyclists.

Drawn by Kyler Mart and made in the US of A by Specialized. Two bottles sell for $27 shipped or $37 shipped Internationally. This is a PAIR of bottles.

As arguably one of the first legitimate streetwear operations, NYC’s Supreme has literally been there, done that in today’s collaboration environment. Recently however, they’ve been branching out of their normal product line with some left field products. Case in point: these Specialized purist water bottles. Luckily, you won’t have to camp outside one of their stores to “cop” a pair. These are going up on the shelf in the office for sure.

Our friends at Poler just stoked their bicycle water bottle for 2015, as a follow up to their highly successful Purist bottles last year. Scoop up one or a pair at Poler today.

Custom titanium and stainless bikes are pricey, plastic bottles are not, nor are plastic storage kegs. Both are for sale now at Firefly.

King Kog takes their popular, Gator-inspired logo and puts it on a blue Purist bottle. Simple some would say, genius as far as I’m concerned. See more at King Kog.

I love me some fat kitty cats, even fat bobcats, especially when they’re on water bottles. How’s that for a sales pitch? Team Dream has new stuff in stock, head on over to check it out!

I’m a pretty simple guy when it comes to products. I like black jerseys, black t-shirts, black decals and yes, black bottles. You can’t sell black on black though, so for the Radavist’s first bottles, I went with the Specialized’s Purist in a 26oz (it’s summer, drink up!), Watergate top, trans grey with black printing. Printed with “The Radavist” “Rubber Side Up” on the top and the Jackal with the Rune Sigil on the bottom.

These will look good on any bike and even better a bit scuffed up.

Swoop up a set (2 bottles) below for $25 shipped in the US, $35 shipped worldwide. SORRY SOLD OUT Each set will come with stickers.

These won’t last, but I’d feel bad if I didn’t give you a heads up! Head over to Mudfoot‘s shop to buy a pair.

You can never have enough bidons and while I’m not a vodka guy, I really love these new Absolut FYXO bidons! In stock now at FYXO. 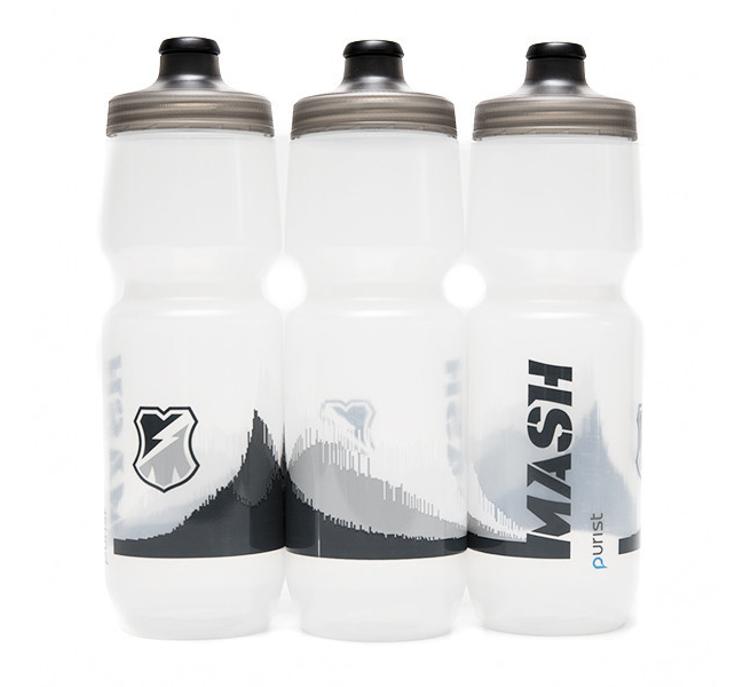 Like jerseys, you can never have too many bidons. Mash recently restocked their selection to include the new Histogram Purists.

I’m not posting a whole lot today but the guys at Yonder Journal are killing it with these Mythical State of Jefferson Permanent Purist bottles. With artwork by Joshua Porter, each bottle features educational art and an important history lesson. The best part about the bottles is that you can help fund the Brovet 3: Mythical State of Jefferson Permanent (MSOJP) printed book later in 2013.

Pick up a bottle here, or the bottle and the book here. Right about now, the warmer parts of the country are in dire need of large bottles. Luckily, Team Dream is on top of the growing demand with their new 22 and 26oz Stripe Purist bottles. Swoop a set up at Team Dream Team Bicycle Team Dream. 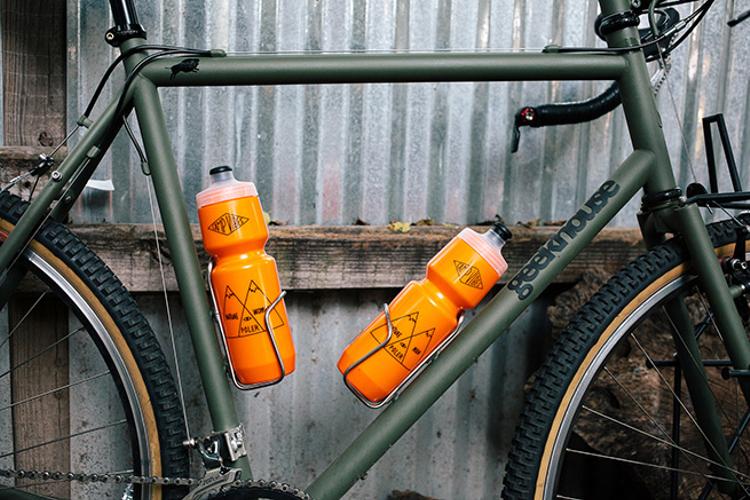 I can’t think of a better bottle choice for the Geekhouse than the new Poler bottles. Ok, maybe it is a little too much, but still…

Bottles, bottles, bottles. I have to resist the urge to buy each pair I come across but I might make an exception with these Team Awesome Purist bottles… Thanks to Firefly for the awesome photo! 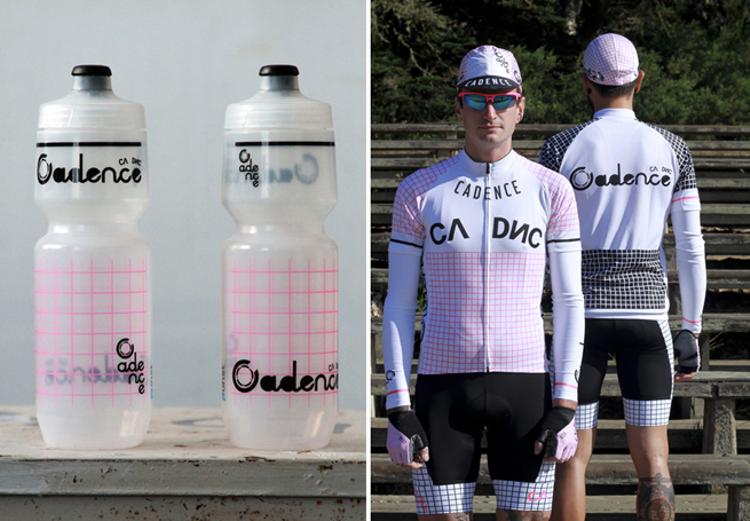