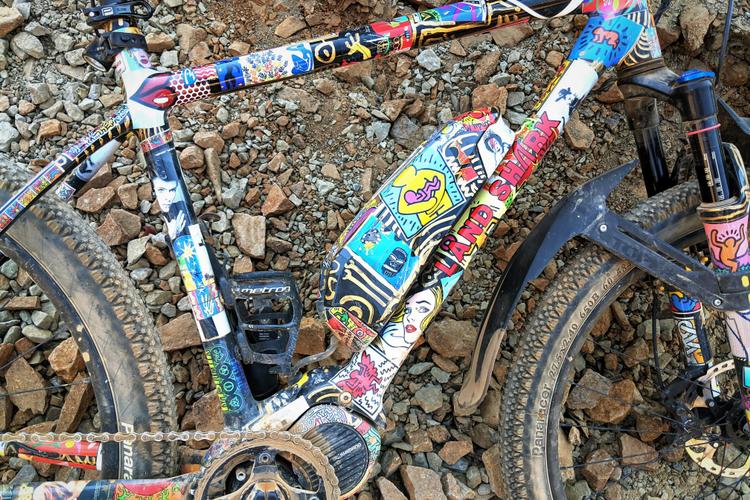 The work of John Slawta is a lifelong pursuit of not only creating wild paint jobs but of bicycle design and engineering. Landshark is one of the most iconic custom framebuilders and even though they have moved away from steel frames, the spirit is still out there. One of the great things about Facebook – yes, I just said that – is the way in which communities come together to show support for others and in this case, appreciation for the work of Landshark. This Facebook group is all about Landsharks and is well worth the click-through to see some truly unique and well-used bicycles. 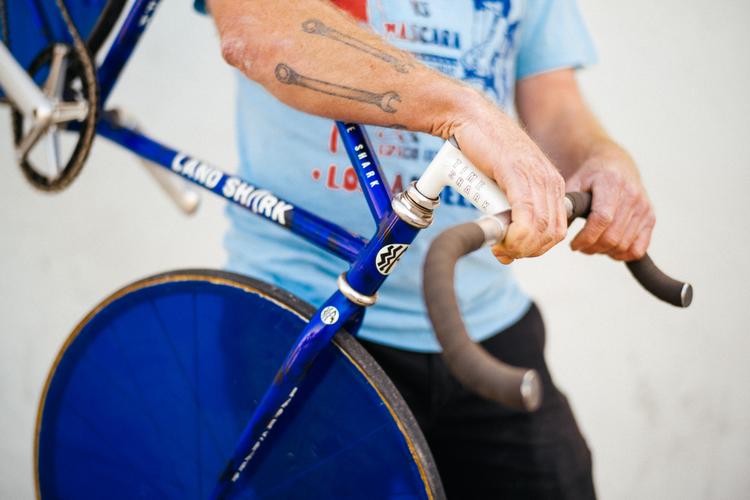 Jim C, one of the founders of Orange 20 and later, Cranky’s in Santa Barbara, held a swap meet sale at Golden Saddle Cyclery today, before moving out east. Jim brought along with him a unique Land Shark Time Shark frame. This frame was allegedly raced by Amanda Henry in the 1986 UCI track worlds in the Flying 250mm. While I can’t find any information on the bike, or Amanda Henry’s career online, Jim’s memory of this frame’s history will have to do.

The asymmetric seat stays were a common detail on these Time Sharks, as were custom stems, wild paint jobs, and beautifully-curved forks. A few more details of note include the Magic Motorcycle cranks, which were later purchased by Cannondale to become part of their Coda line. Check out that outboard bottom bracket! The home-made disc wheels are made from common plastic, mostly used in model airplane fuselage construction.

All in all, these “funny bike” designs are always a pleasure to document and admire. Jim passed this bike down to the team at the Cub House, so if you’re ever in their neighborhood, make sure you check it out. See more photos below.

John Slawta is as much an artist as he is a frame builder. It’s rare to see any one of his custom bikes from the late 80’s or early 90’s with the same paint job. Sure, he went on stints where he developed paint themes, but each Land Shark frame was truly unique. It’s for this reason that I’ve often found myself on a Land Shark kick, where I’ll scour ebay or Craigslist, hopeful of finding a bike that would fit me.

That’s how David, a Stumptown employee, found this bike in particular. Truthfully, he actually scored two bikes when he replied to a Craigslist ad in Los Angeles. This one in particular just happened to fit him a bit better. Turns out, this was Harrison Ford’s son’s bike. Oh SoCal…

Not needing an actual cyclocross racing bike, David converted it to more of a commuter. Since it lacks fender mounts, he has clip-on fenders that he’ll swap on and off depending on the unpredictable Portland weather. Wide, uncut riser bars and a 1x drivetrain, thanks to a Wolf Tooth, give this bike a rally-like feel as he zips around town going to and from various Stumptown locations.

Dedacciai Zero tubes offer a unique silhouette, especially for a cyclocross bike. Check out the bi-oval, shaped, top tube’s flat profile for shouldering and the downtube’s diameter as it butts into the bottom bracket shell. A true custom selection for a bike that, at the time, was a ripping race machine. Hell, it would still roast a cyclocross course. For now, it’s pretty content as a commuter and David is stoked. Win/win if you ask me.