Eric at Winter, like many builders, has been busy, busy, busy with frames, the most recent being this Consano All-Road. This frame is equipped with clearances for bigger tires, while maintaining a road geometry and feel. Equipped with PAUL MiniMotos for stopping power and a deep red coat of paint from none other than Keith Anderson.

Head over to Winter Bicycles for more.

Eric from Winter is slayyyyyyying it this year! Here’s the latest, the Sean-nós frameset, a sportif road:

“The Sean-nós is designed to run modest width tyres and mudguards under a mid reach brake. The heat treated, thin wall steel tubing is joined with clean, crisply carved continental style lugs. The quickly raked fork and open scalloped drop out treatment are reminiscent of an older style. The Sean-nos is equally at home in the mountains, rain and rougher roads The racing green metallic paint and gold box lining are provided by Keith Anderson.

This frame is currently available – holler at Winter and see more photos at the Winter Flickr. 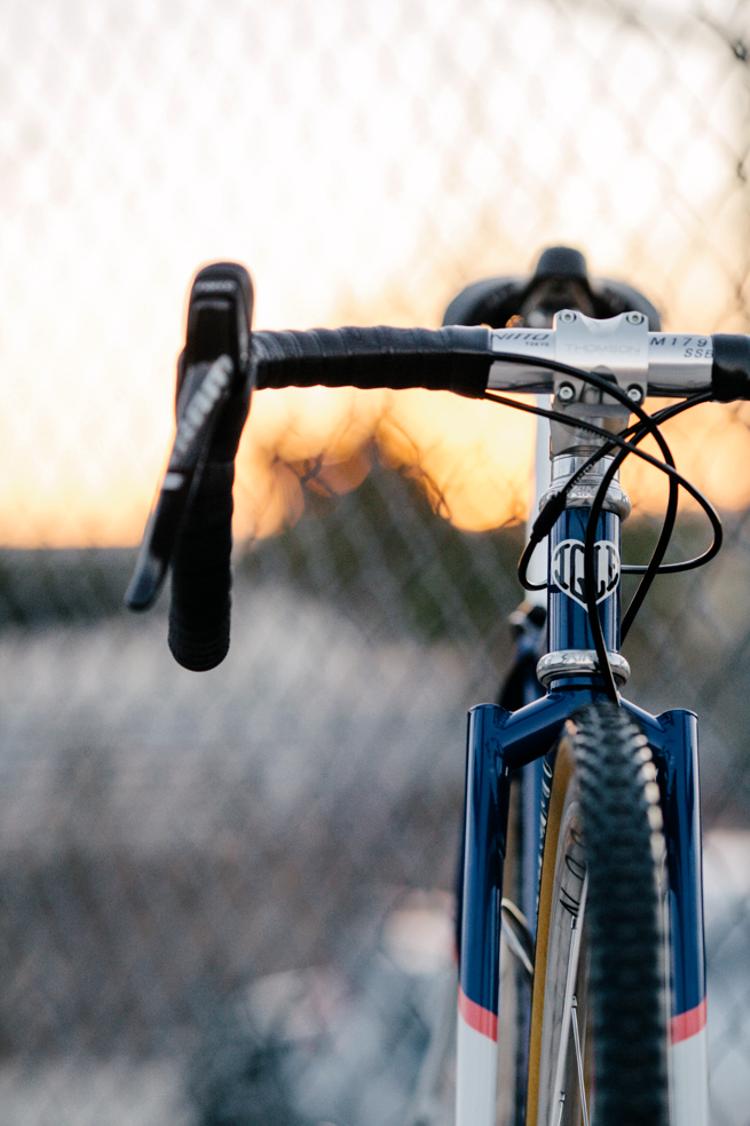 Every party involved with this bike are such great people. Chris Igleheart, life-long frame builder, Keith Anderson, phenomenal painter and Jen, owner of Panty Raid and general rad woman. When Jen reached out to Chris at the 2012 NAHBS, she wanted a “do it all” bike. Something with a little more tire, more stopping power and still cross race ready if she ever felt the desire. I kind of feel like that’s what a lot of people look for in a cross bike. The main challenge with this frame, as with any small frameset, is making it look good and I think everyone nailed it! Including Golden Saddle Cyclery on the stellar build!

Pardon my hasty photos, the sun was going down and it was my last night in LA, hence the crossed-chain… At any rate, see more in the Gallery! 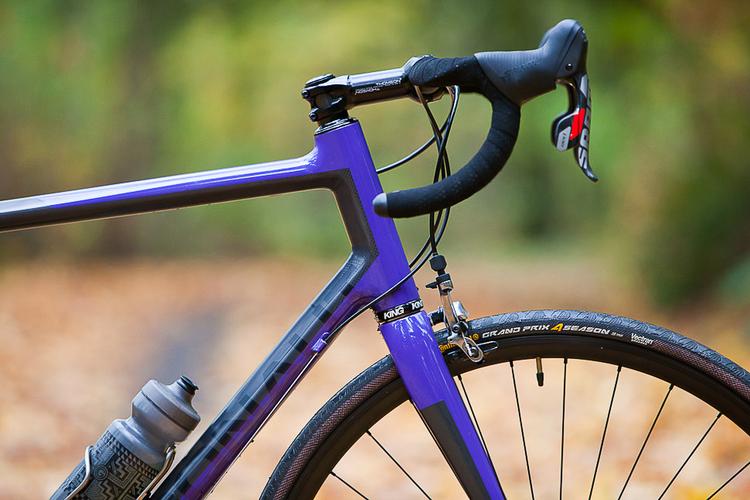 I’ve been trying to type out a few introductory sentences for this bike for the past few minutes and honestly, I have no idea where to begin. So let’s start out by me saying that it is by no means the first carbon fiber bike I have been offered but it was the first that had a compelling story attached with it, something I’m always intrigued by and will ultimately make for a better piece of journalism.

For the past year or so, I’ve been watching Ben at Argonaut Cycles reinvent his modus operandi. He made the shift from building steel bikes to developing a new fabrication system with a local carbon manufacturer. Unlike anything else currently being manufactured domestically, or overseas, the new face of Argonaut is focused on the future of bicycle design. But that’s not to say that Argonaut’s steel past had been cast aside.

Before he even began to sketch out his design, he met with the carbon engineers, who reverse-engineered some of his favorite steel tubesets, and improved upon their weaknesses. Ben wanted his bikes to have the same ride characteristics of his steel bikes, just more technologically advanced. He came to loosely call this “steel 2.0” but you should take that with a grain of salt because let’s face it, carbon fiber is not steel.

This bike is however a by-product of domestic engineering and fabrication. The carbon weave is from the States. It’s cut to shape, moulded by a proprietary process, assembled and finished all within an hour drive from Portland. The process used produces very little waste. There’s no hodgepodge assemblage, no messy resin and it’s 100% custom. Basically, it’s a streamlined process that utilizes technologies that allow each frame to be engineered to a customer’s specific needs.

That’s what had me intrigued in Argonaut and so I agreed to come on board. Soon, I started to hear the echos of “steel is real” in the back of my head, however. I knew my Bishop is as perfect as a steel bike could be. The geometry is dialed and I’ve never ridden anything like it. So I approached Ben with the idea to make the exact same bicycle, just with his new carbon manufacturing process.

Dimensions, trail, geometry, were all the same, just the profile changed a bit to a racier silhouette. Even the tube’s proprietary layup were influenced by the same steel that my Bishop is built from. Bottom line is, I wanted to be able to subjectively compare the two materials.

After I filled out my ride journal, had numerous talks with Ben and designed the paint, the bike was done. Last week, I arrived in Portland and immediately got to check it out. First thing I noticed was how much of a stellar job Keith Anderson did on the paint. The build wasn’t bad either! Rotor cranks, SRAM Red group, ENVE tapered fork, ENVE bars, Thomson stem, Fizik Kurve saddle, Chris King hubs to H+Son Archetype rims (built by none other than Sugar Wheel Works), Chris King PF30 ceramic BB and that special I8 Chris King headset. It was a dream build.

But what about the ride? The first day, we did a nice 25 mile ride up Saltzman, then Saturday, we headed out towards Mt. Hood for 75 miles (then Billy broke a spoke and we had to call it quits). My initial reaction is very optimistic. The ride is what I can only call “light and responsive”. It handles like my Bishop but even better. Descents are faster and it climbs with little or no qualms. There’s no jarring feel when I hit rough terrain. Everything feels dampened and smooth.

My previous experiences with carbon rental bikes like Cervelo, Specialized and other brands were always harsh. The bikes were stiff and I didn’t enjoy the ride. I’m not a racer, I don’t need a bike engineered to race. I need a bike that rides how I want it to, when I want it to and that’s what Argonaut produced for me. It really is like steel 2.0… So what about my Bishop? There’s nothing on this planet that would make me stop riding it. That’s a fact. Steel is still, real but this new experience has been loads of fun. As for the bike itself, it’s very easy on the eyes.

The bike weighs 15.5 lbs as seen here (minus bottles). With middle-grade LOOK pedals, 32h wheels and 28c tires, that’s not bad at all.

See more photos in the gallery!

It’s hard not to get all warm inside when this head tube stares you down. Keith Anderson is selling this immaculate DeRosa through his paint shop. $1,200 gets you a bike as Italian as a cannoli stain on an Armani suit. 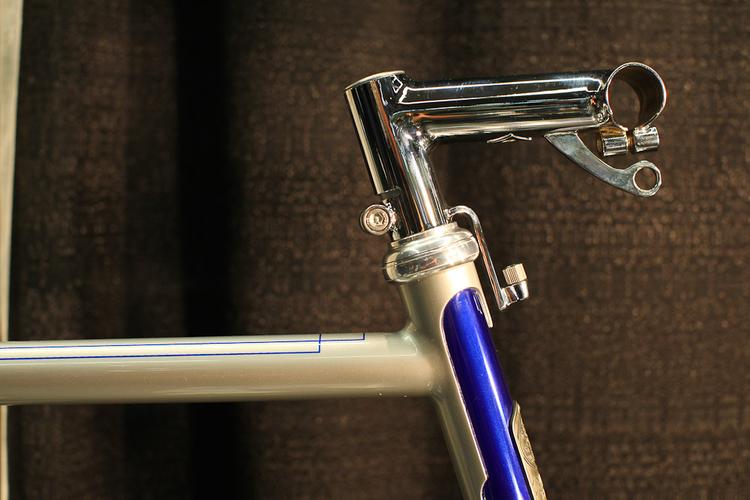 Ever since last year’s NAHBS, I’ve been watching Eric at Winter‘s brand grow. I’m not exagerrating when I say that his bi-lam head tubes were some of my favorite details at this year’s show. His Jack Taylor-inspired, Keith Anderson-painted and box-lined touring frame was completely stunning. Other bikes in his booth included a simple, yet elegant road frame, a charcoal and mint track machine with a seat tube cleave and a killer commuter, ready for night rides through the Portland streets. All of which you can see in the below Gallery.