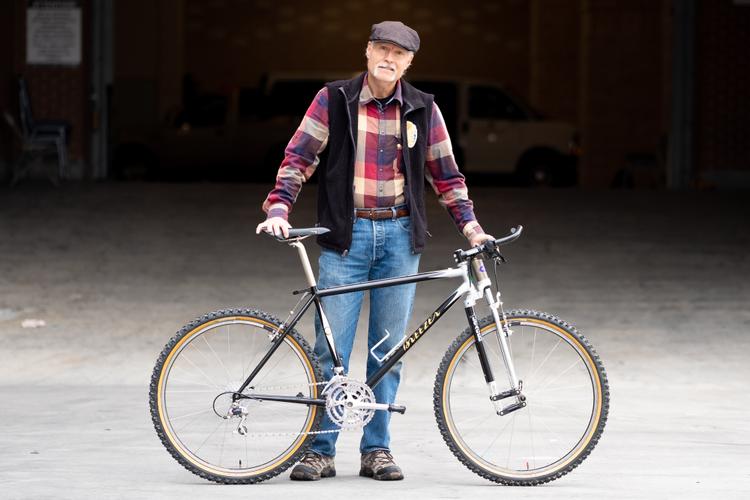 Nineteen ninety-two, SPDs were finally becoming accepted in lieu toe straps, Joe Breeze welded his last Lightning, and I was 8.  I didn’t have an appreciation for mountain bikes until later in life, but when I did I still remember reading about Joe.  Fast forward from twelve-year-old me to now, as I was loading some friends from Bicycle Revolutions into Philly Bike Expo, I got a text letting me know Joe brought this and was around, with the weather for Saturday looking a lot like rain I was happy to be able to spend a moment talking with Joe about this bike.

This is the last bike built entirely by Joe Breeze, this 92 Lightning was made with Ritchey Logic short butted tubing according to Joe. The headtube is the first iteration of Joe’s diffusion tubing which placed material around the headtube and tied back into the downtube with a gusset evenly distributing, or diffusing that force to the downtube.  This design allowed for use of the Lawwill Leader fork. Around this time Joe was in Moab experimenting with new ideas and concepts, one of them was the diffusion tubing concept, Lawill forks, and fairly modern (for the time) geometry.

Ritchey WCS components had just launched, so Joe built this bike with a smattering of those parts as well as his backdraft rims made by Ukai in Japan, there are even some early generation Paul Component levers that were used on the build. This bike was on display briefly before retiring into Joe’s collection, thanks to Joe for the time to talk about this awesome piece of MTB history.  I was able to meet someone who created my vehicle, my escape from daily routine, the entry drug to all other types of cycling for me, the mountain bike that certainly made PBE special.  Oh and according to Joe those zip ties belong there.