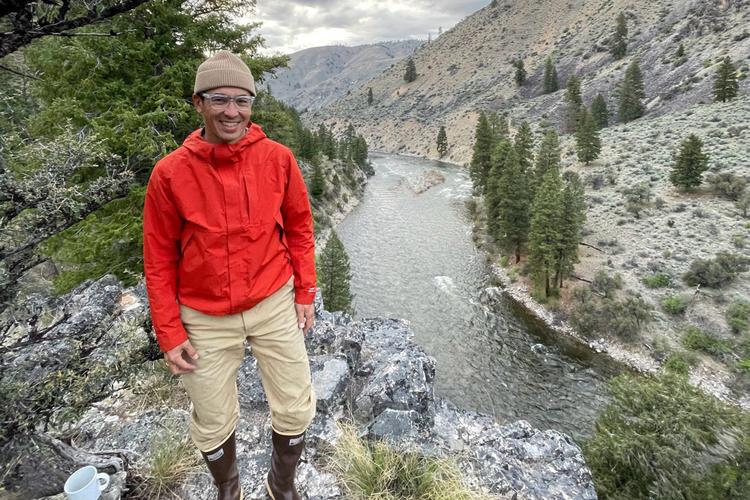 Do you recall the video Going Without Knowing we posted a few weeks back? Well, Hyperlite Mountain Gear just posted a follow-up interview with artist Geoff McFetridge on their blog and I think you all will find it interesting:

What parallels can you draw between your artistic style and how you travel and engage in your preferred pastimes outside?

I think I get pretty deep into things. Deep and fringe-y. I first raced my bike as cyclocross, and I became more engaged with skiing when I learned to telemark. I didn’t get interested in fishing until I saw Tenkara. I don’t run road races, only trail runs. You can see a pattern here. I am not embarrassed to go directly into the deepest (trendiest?) zone of the margin—the single-speed of EVERYTHING.

“I try to push projects to have something unique happen that I can take with me. Work that becomes worthy of memory. It is catch and release. You might have a photo of the fish, but mainly you have the feeling of the fish on your rod, the memory of a place and who you were with. Paintings are sold, and projects come and go. The life I live as I do them is equally important.

We are clay on a potter’s wheel.” – Geoff McFetridge 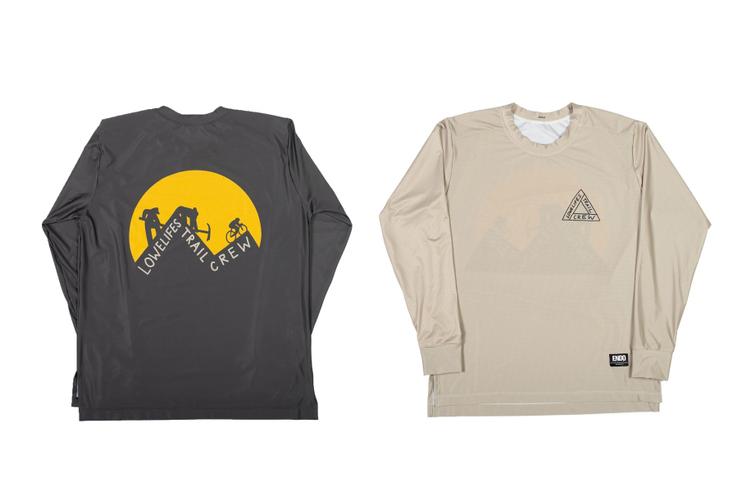 The Lowelifes Respectable Citizens’ Club, aka the Lowelifes Trail Crew are McCloud-slingin’ trail workers based in Los Angeles, who help maintain trails surrounding Mount Lowe. Recently they teamed up with artist Geoff McFetridge and ENDO Customs on trail work / riding jerseys. These are made in Los Angeles and all proceeds go to the trail organization. If you want to pick one up, head to Lowelifes and read more about their mission statement at their website. 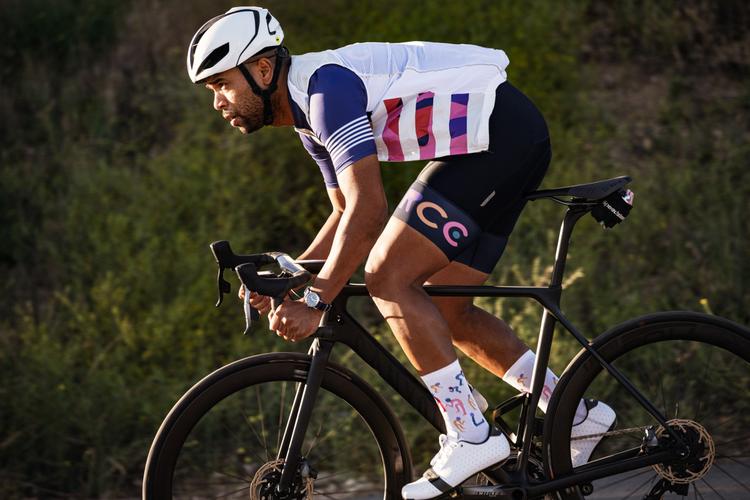 Rapha and artist Geoff McFetridge have long admired each other and this week, they made their admiration formal with an entire capsule collection, complete with socks, jerseys, base layers, musettes, and more, designed by Geoff himself. As a skater kid, I personally have admired Geoff’s ability to document culture through his ambiguous figures, and in recent years, his work has popped up everywhere. This collection looks fantastic and is in stock now at Rapha.

Not since Rem Koolhaas have I heard a better explanation for what Los Angeles is. Nice one, Geoff! 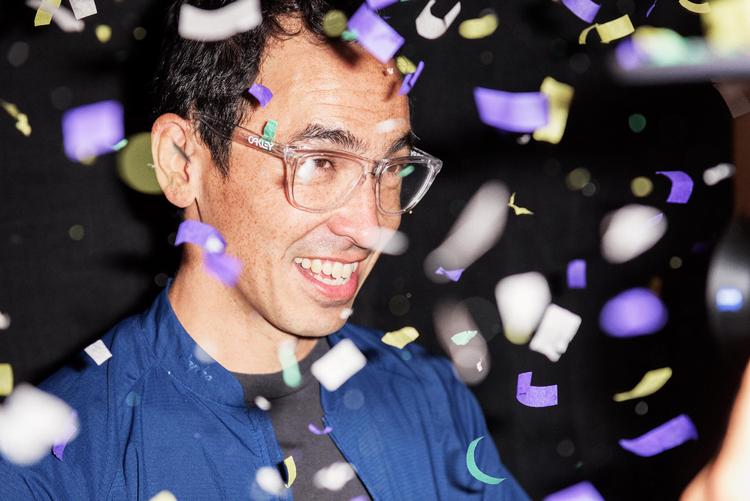 “First things first: how did you start riding road bikes?

It was a slow-burn thing for me. I moved to LA, and I couldn’t help but notice the occasional rider travelling through the city, exploring and traversing. I got a road bike and just rode alone all the time, and I dug in to the aesthetics and feelings of riding a bike. The interesting thing is that this was around the time of Armstrong, so cycling was booming, but just not in the way that I was interested in. I mean, I loved to watch the Tour and so on, but it wasn’t why I rode a bike.”

Check out more from this great interview at Rapha! 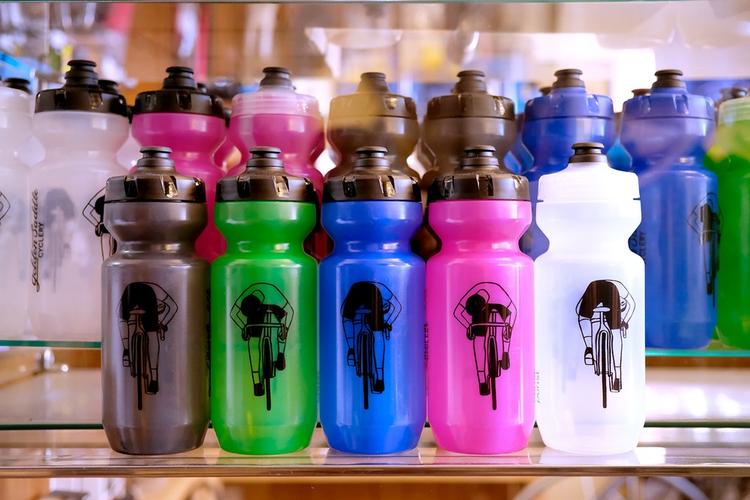 You can’t go wrong with Geoff McFetridge! Or Golden Saddle Cyclery for that matter. Pick up these new “Dropper Bottles” now at GSC. 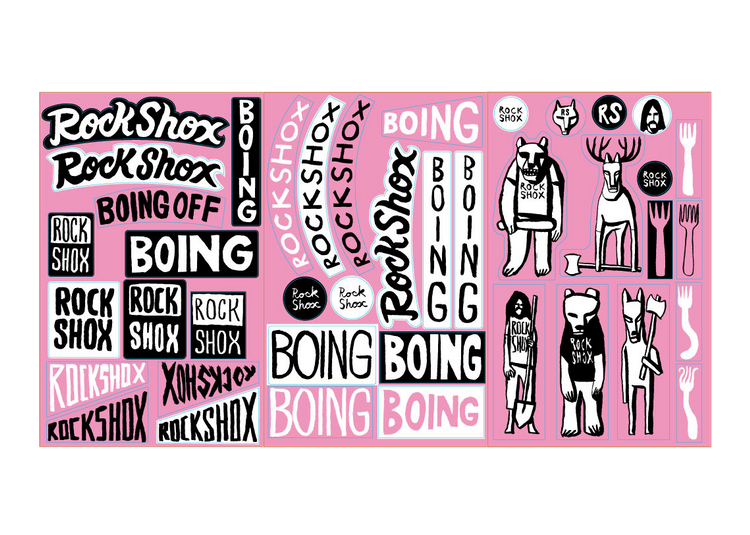 You may or may not remember this project. RockShox reached out to a handful of artists back in 2011 to design decal sets for their forks. Geoff was one of them, bringing his playful typography and animals to the design palette. You can see the other artwork over at PinkBike. 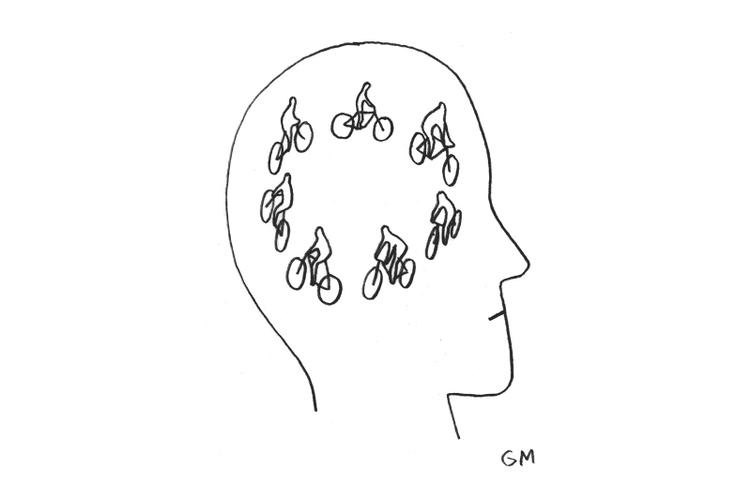 This is Geoff McFetridge‘s way of reminding us that the week is almost over… Check out more of his work at his Tumblr!

Interviews like this are always so good to gain insight into an artist. Geoff McFetridge is a favorite over here…

Damn! English Cycles, Fairwheel and Geoff McFetridge got together to create one slick bike. I’m stoked to own a bike with Geoff’s work on it, just like I was stoked when I got a pair of his Nike Vandals back in the day.

See more at Fairwheel Bikes and thanks for the heads up Tracko.

We all know Geoff can design great bikes, but here’s a new video showcasing his talent.

Geoff McFetridge is a longtime legend in my book. Growing up skateboarding in the 90’s, there were a handful of artists that always had their finger on the pulse. Everywhere you looked, he was doing illustrations, or projects with brands like Nike – those Vandals were my favorite. About 6 years ago, Geoff, along with some like-minded friends started a team in Los Angeles called Mudfoot.

Years later and the team has grown, racing and riding the roads, courses, tracks and paths of LA and beyond. The team, it turns out, is a highly successful brand as well, planning rides in Los Angeles and selling out instantly of any good or product they list on their site. All of which is designed by Geoff.

Last year, the team looked to Santa Barbara’s Stinner Frameworks to design and fabricate a run of team bikes. They were a smash hit and looked exceptionally good bunnyhopping barriers, or taking beer handups. So when this year’s season drew near, Geoff worked with Aaron once again on designing a new frame.

Even though these frames were completed towards the end of the race season, we all know a cross bike is just at home in a race as it is on dirt and trails. I’ve got a few more races here in Austin, as well as Nationals, all of which I’ll be breaking this beaut in. Once it’s built, I’ll give a full parts break down and a proper photoshoot.

Before it got built up however, I took a few minutes to photograph it in my office. See more in the Gallery!

The man behind Mudfoot, those Stinner bikes and all kinds of rad stuff has a pretty kick-ass Tumblr. You should check it out!

… and I’m stoked to be getting a bike designed by him this year. I first was introduced to Geoff’s work when I used to skateboard religiously, as I’m sure many of you did at one point. Who else had those McFetridge Vandals?

In the 90’s, when skateboarding and larger names like Nike began to look to artists to revitalize their brands, Geoff’s work inspired me. Even in my 30’s I still love seeing what he’s been up to.

Looking good dude and I love seeing race numbers hanging in studios like this. 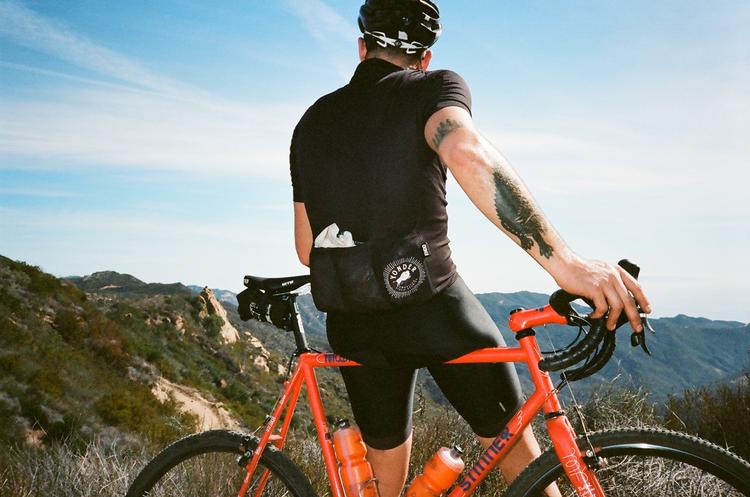 Aaron Stinner’s work with Mudfoot and Geoff McFetridge might have been one of the raddest collaborations last year. For those of us who grew up skateboarding, Geoff’s name resonates with unique design and seeing it translated to something we all love – cycling – was both exciting and frustrating. The latter because, well, we couldn’t buy a piece of that pie for ourselves! Seriously, the bikes came out sick!

The most important thing to walk away with from this conversation is that you too can make rad shit happen in your town, with your local artists and your local builders. It just takes initiative.

For more what went into this collaboration, head over to Stinner Frameworks’ blog!

As for more 35mm shots from this ride, they’re coming… 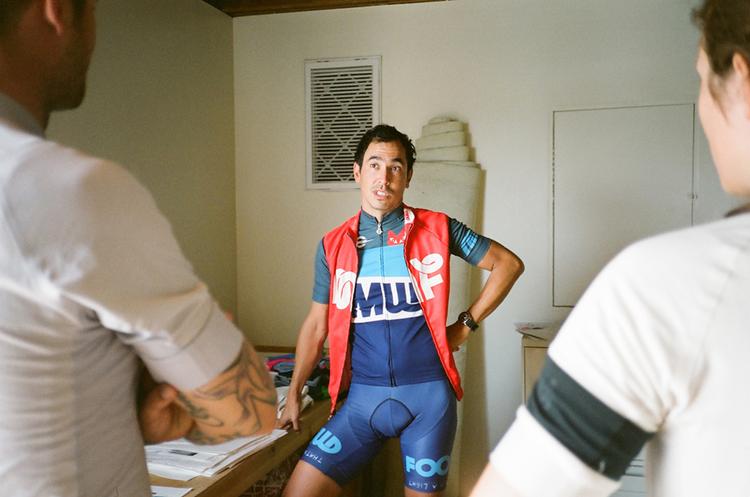 At a glance, Los Angeles might not feel very bike-friendly, but scratch the surface like a lottery ticket to find an intertwined network of very open, majestic roads, many within the city itself. If you don’t have time for Dirt Mulholland, or the Angeles National Forest, Griffith Park and the famous Observatory will do just fine, especially if you start your ride out at the Trails for a coffee and pastry.

This particular morning, a solid group of people gathered to ride with LA-based artist and creator of the fabled Mudfoot racing team, Geoff McFetridge. No one was half-wheeling, no personal records were set, we all just chatted as we climbed Griffith Park and took a quick loop through “La La Land”. The ride ended at Geoff’s studio where we were given insight into his daily operations…

See more in the Gallery but first…

During the Tour of California, Rapha North America and PiNP got together once again for a series of stories from the road. Under the guise Cali is Not California™, I took photos and Jeremy Dunn of Rapha North America told the tales, all relating to the thing we love: riding bikes with friends.

See more on this afternoon at Rapha’s blog, including Geoff’s illustration for the La Centieme Poster Collection at the Cycle Club SF.