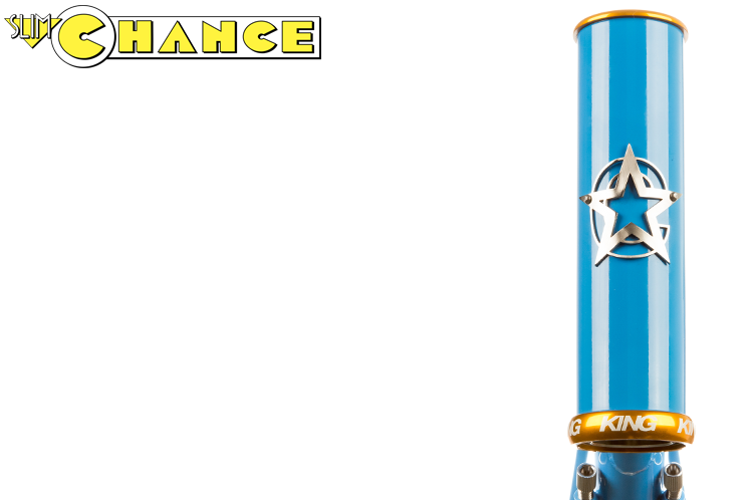 While Chris Chance and Fat City might be known best for their MTB, segmented forks and revolutionizing the tig-welding process for frame building, they also had a very successful road bike, dubbed the Slim Chance 2.0. Well, with the relaunch of the brand and its hardtail MTBs, Fat City has just announces their new Slim Chance frames… Check out these details and head over to Fat Chance to see more!

-Available as a frame, ENVE carbon fork and Chris King headset package for $2295.
-Segmented steel Yo Road Fork will be available as an option in the coming weeks.
-Painted stem upgrade options; Carbon (ENVE) for $355, Alloy for $250.
-Choice of mechanical or electronic shifting options at no extra charge.
-4 colors inspired some of our favorite Slim’s from the past; Blue, Pearl White, Pale Yellow and Red.
-Framesets ship in 4-6 weeks, complete bikes in 6-8 weeks.

This project came out great! Check out all the information in the video above, more details and photos below and ordering information at Affinity!

Fat Chance has a few extra frames from the 2015 pre-order up for sale with large / xlarge sizing in the 29’r and medium in the 27.5. Unfortunately there are no rigid forks in stock, but all the colors are available for now. Price is $1,699 and frames will ship mid February once the Kickstarter and pre-order frames are shipped. Head to Fat Chance now to see the 29’r and 27.5 hardtails. 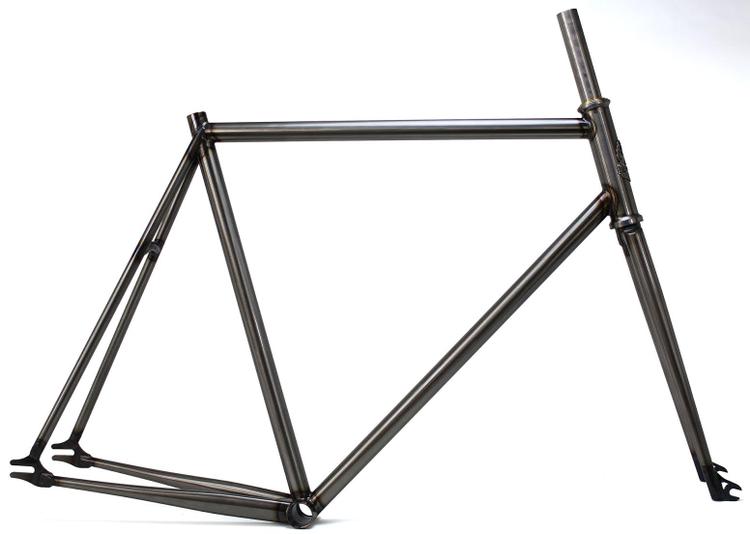 The FBM Sword track frame is back this year and ready for pre-order. Available in clear, trans red or raw, with sizing from 48cm – 58cm and now with integrated headset cups as a standard option. The Sword is made in the USA by the same guys who make FBM BMX frames, so it’ll take a thrashing. Head over to FBM now for more information.

I’m always stoked to see more domestically-produced bike frames popping up, especially in aluminum. VYNL Bikes are a relatively new company out of San Jose, California offering road “racing” frames for $1900 with a standard powdercoat and a wait time of a week, or you can go custom colors and tack on a few more weeks. While there’s no information where exactly they’re made or who is making them, with the number of sub-contracting frame building companies around, I wouldn’t be surprised if it’s frame building pedigree producing them. Expect the same large-diameter tubing you’ve come to love from US-made aluminum frames. If you’d like to see them in person, head over to Sugar Cycles in Missouri City, Texas or Red Lantern Cycles in Menlo Park, California.

Check out more at VYNL Bikes.

Velo Orange’s newest frames really have it all figured out and the Pass Hunter disc framesets are no exception. Disc brakes, braze-ons, clearances, all with a classy 1 1/8″ threadless steel fork. Head over to Velo Orange to see more details and ordering.

Long-travel hard tails, especially when coupled with a dropper can be super fun. Add in clearances for a 2.4″ tire and suddenly you’ve got a very capable steel frame from a company that knows a thing or two about steel. The Ritchey Timberwolf has piqued my interest and I can’t wait to try one of these bad boys out…

Check out more at Ritchey!

I’m here in Portland, Oregon attending the Bike and Beer festival at HopWorks Urban Brewery. While I’ll be documenting many of the frames, I’ll also be capturing the general vibes. For now, let’s just check out some bikes!

Mark Dinucci is the man. He’s been building frames for over 40 years, has been the go-to consultant for numerous other builders and still to this day epitomizes the craft of bicycle frame building. For this year’s Bike and Beer Festival he displayed a classic road frame, fit for a Dura Ace 25th anniversary group and elegant Joe Bell paint. While the bike wasn’t a complete, I still wanted to get a few photos of this masterpiece. Oh and some portraits of Mark himself…

This past weekend brought about a ten year anniversary for Mash and to commemorate this event, Garrett Chow’s newly-designed 10 Year Parallax Frame went up for pre-order. Inspired by “X”, the Roman Numeral for ten, this intricately detailed paint job is made from thousands of intersecting and overlapping lines in three dimensions. It’s by far the most complex paint design I’ve seen on a production frame.

Head over to Mash to read more and pre-order a 10 Year Parallax Frame. 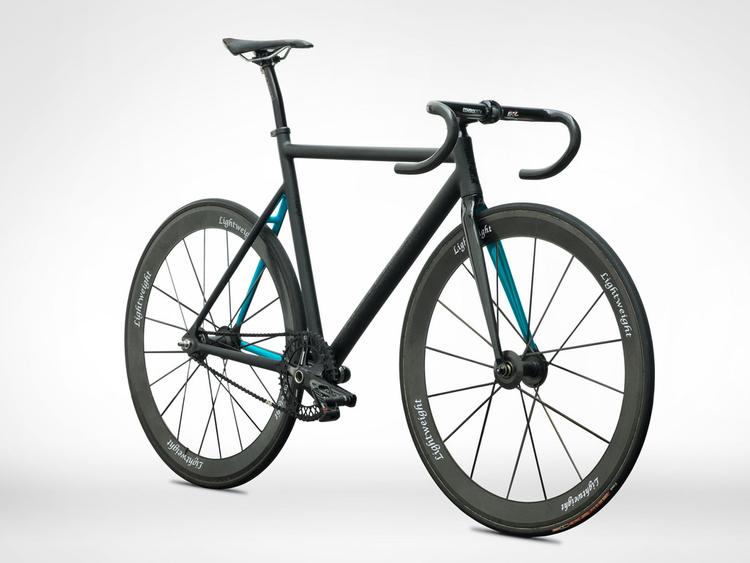 Factory Five’s latest addition to their track bike line is the Stream, a performance minded machine made from 6061 aluminum and shaped to their custom specifications. The Stream comes in four colors and three sizes. Head over to Factory Five to see pricing and availability.

The Going-To-The-Sun Road in Glacier National Park becomes the backdrop for an American cycling. Andy Hampsten won the 1988 Giro and these two new frames represent that legacy. The Maglia Rosa comes in either a Superissimo steel frame or an il Carbonario carbon frame.

Niner now offers their Ros 9+ as a frame and fork, allowing you to build yours as you see fit. There’s been a lot of buzz around this frame and after spending a lot of time around one in Los Angeles over the past few weeks, I gotta say that I’m impressed. It looks great and comes from a company like Niner that knows a thing or two about making highly shredable 29rs…

Check out specs for the Ros 9+ frameset at Niner Bikes.

The Festka ONE epitomizes performance and technology. With all this “savoir-faire”, Festka has two top of the line carbon frames: ONE RS (Racing Sport) and ONE LT (Light). For Michael Moureček, the founder of Festka, when it came to making himself a bike he chose to go with the lighter option. Michael’s ONE LT Dazzle weighs 5.71kg as a complete bike and 820g as a painted frame.

Michael chose to paint his bike with the acclaimed design of Festka, inspired by warships and perfected over time: Razzle Dazzle camouflage. This is the third generation of Festka’s dazzle and quite possibly their most balleur bike yet. Check out more photos and the full build kit break-down below.

Originally founded in the early 1970’s by Stelio Belletti, the brand Stelbel has just risen from the dead with some exceptionally-designed frames. Stelbel brings their expertise of tig welding to offer everything from a modern road, to a track (don’t miss those track ends!) and cyclocross frame but that’s not all, there’s much more to see at Stelbel.

Twin Six’s affordable “do anything” frameset, the Standard Rando is now in stock at their site in gloss black or green. These frames tout a comfortable, yet non-sluggish wheelbase, a 45mm offset and come in sizing from 51cm to 59cm. Build them up as a cyclocross bike, or a light tourer / commuter with fenders and take your pick of 2x or 1x cable bosses.

Personally, I’m impressed with Twin Six’s bike lineup and for anyone looking for a $600 frame, the Standard Rando is a contender. Head over to see more information.

The JB Racer may be Breadwinner’s flagship MTB but it’s far from anything new for Ira Ryan and Tony Pereira. When the two framebuilders decided to join forces to create the Breadwinner label, Ira Brought his knowledge of road and cross bikes to the table, while Tony weighed in on the MTB game.

Truthfully, the JB Racer is a continuation of the way Tony Pereira has been building cross-country mountain bikes for years. Named after Jeff Bates, one of Tony’s best friends who died from skin cancer, the JB Racer is a true to form XC race machine. Racing mountain bikes is where Pereira Cycles first made an appearance and Jeff Bates was one of the first to race under the brand.

When Breadwinner formed, Tony used his singlespeed MTB as inspiration for the JB Racer and here we are today. This and the Bad Otis offer two sides to the MTB coin. After we shredded Brown’s Camp last week, I shot some photos of Ira Ryan’s personal JB Racer. While there’s more to come from that day, I really wanted to showcase this bike on its own.

If you’re interested in one of these machines, the JB Racer starts at $1795 for a frame.

SOMA’s Juice 29er and B-Side 27.5 hardtail MTBs are now compatible with a Gates belt drive system, thanks to split Tange Sliding Dropouts. You can now choose to build them singlespeed or with Rohloff hub. For this run, they kept the same colors and adopted the Tange split dropout, but future 2015 models will utilize a split stay. As far as current stock, the only other change was incorporating a drive side chain stay yoke to ensure the frames will fit 2.4″ tires and the thick Gates front cog.

If you’re looking for a versatile, steel hard tail, these two bikes are great options. Check out more details at SOMA and holler at your local shop for ordering. You could even set it up as a mean dirt-dropper. Check out Golden Saddle’s latest Wolverine for inspiration!

London’s Kinoko Cycles has just received a couple of easy-on-the-eyes Nagasawa track frames in various colours (that’s British for “colors”) for your consumption. Now, whether you want to just look, or buy one, that’s up to you. Either way, check out more at Kinoko.