The Wednesday was of course first a fat bike, and it served that purpose well when we lived in the snowy interior of BC. It came to us in early 2016, already beaten and broken in from life as a demo bike. As the snow melted out, Stephanie found herself choosing her Wednesday for trail riding over her dual suspension trail bike, and eventually realized that she preferred lots of grip and no suspension to suspension without as much grip.

Around this time our focus came to building our Wolverines, and the Wednesday was put aside for a few months. We traveled on our new bikes, and came to the conclusion that the next time we had the chance to do an extended trip, we’d prefer to have bikes with bigger tires. The new Karate Monkey came out while we were on that trip, and damn if some sweet purple paint doesn’t get your mind running with ideas. Our trip came to an end, winter set in, and we let those ideas roll. 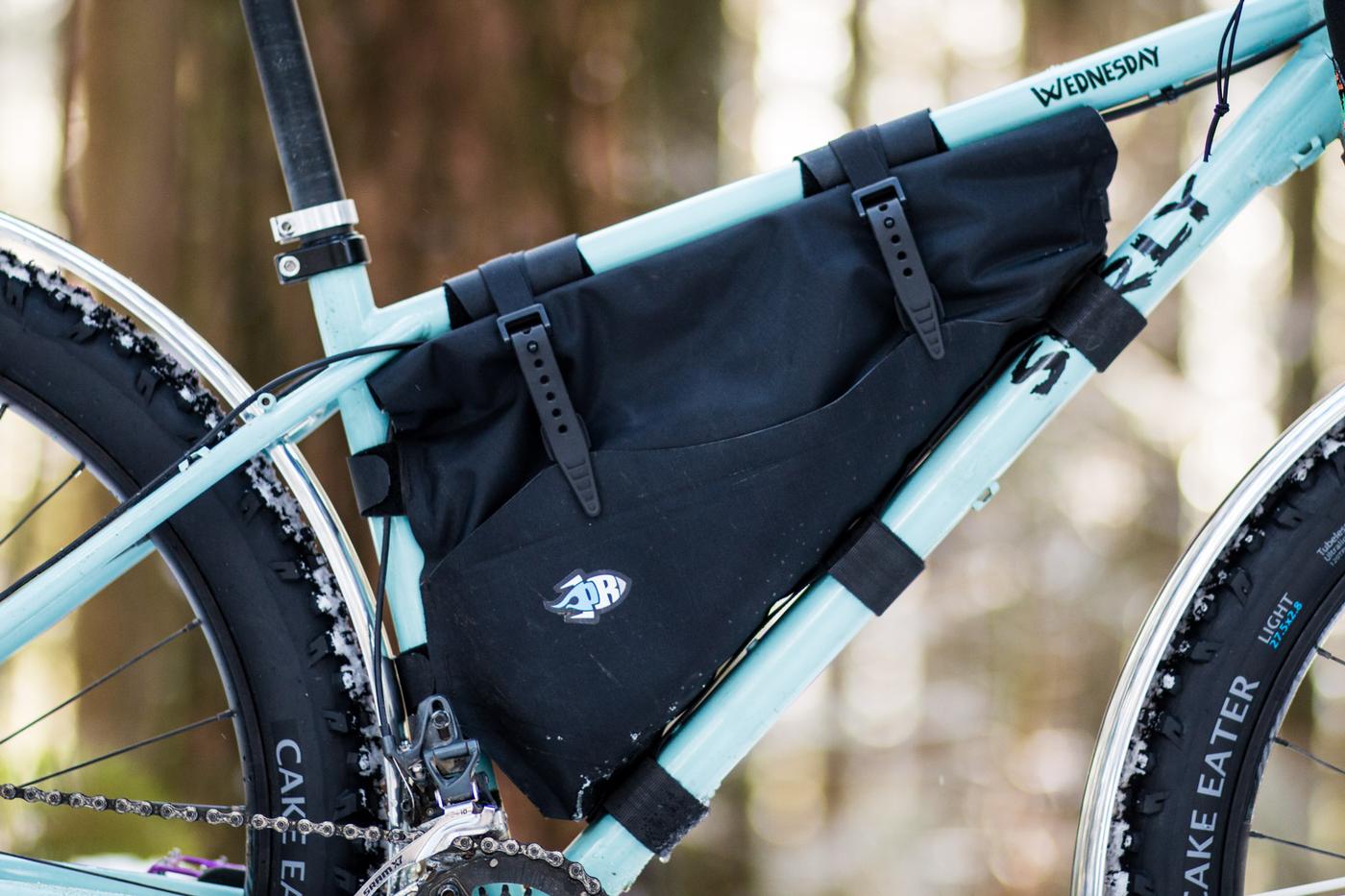 What Even Is Bikepacking?

What makes a bikepacking bike? That’s somewhat of a rhetorical question. I’m inclined to say your route determines your bike choice to a large extent. And the route we had in mind when the Wednesday transitioned to its next phase was the Canadian section of the Great Divide. Chunky off-road traveling, with priority on comfort and confidence over speed.

Sure, the stock 3.8” tires would have done just fine. We admittedly could have done that ride without touching a thing on the Wednesday. We admittedly also like building bikes for specific purposes. So, last winter, when they became available, we pondered picking up a Karate Monkey frameset and building from that – but it didn’t take much for us to decide to keep the Wednesday and put our efforts into a bike that was already part of the family.

Before plus-tire compatible mountain bikes surged into the market, I had a 27.5+ wheelset on my Ice Cream Truck. With normal mountain bikes not giving me the opportunity to ride the new wheel size, I did it on my fat bike instead. I was quickly sold on the convertibility of the fat bike: if mountain biking and bike camping are up your alley, it’s such a versatile platform. 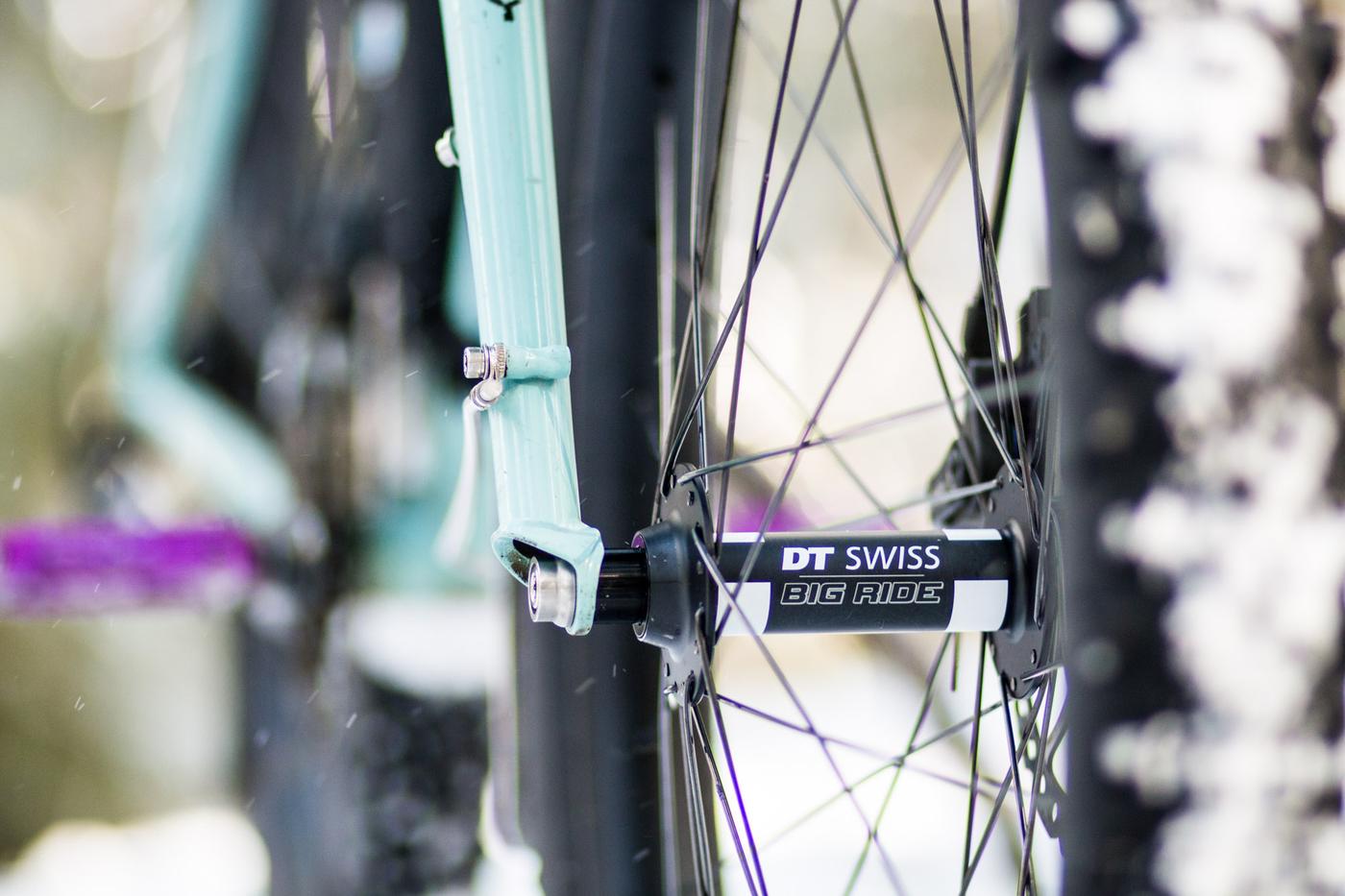 We decided to buck up for DT 350 star ratchet fat bike hubs, and build a 27.5+ wheelset around WTB Scraper i40 rims and Ranger Tough 3.0 tires. Immediately the mountain bike character of the Wednesday was kicked up a notch. When you ride a fat bike all the time, it’s easy to overlook how heavy and sticky the tires are. The new wheels and tires were a great blend for weekend trail rides while maintaining the confidence of big tires.

On her Wolverine, Stephanie loves the carbon Jones loop bar. For this build we went with the most affordable Loop bar, the SG, and the ESI Extra Chunky grips. Like it was meant to be, Porcelain Rocket finished the first prototypes of the 52hz rolltop frame bag, and sent us out a medium, which fit perfectly. We added anything cages and the MCA and Mr Fusion bags from her Wolverine, and were ready for the Divide.

Well, as it turned out, we could only manage a week off together last summer, and instead of trying to find someone for Denver to stay with while we blasted out to Alberta to ride part of the Divide, we opted for a local loop with him in tow. While we didn’t ride much technical terrain on that trip, it didn’t matter. The Wednesday with its new wheels and tires was happy on any surface. 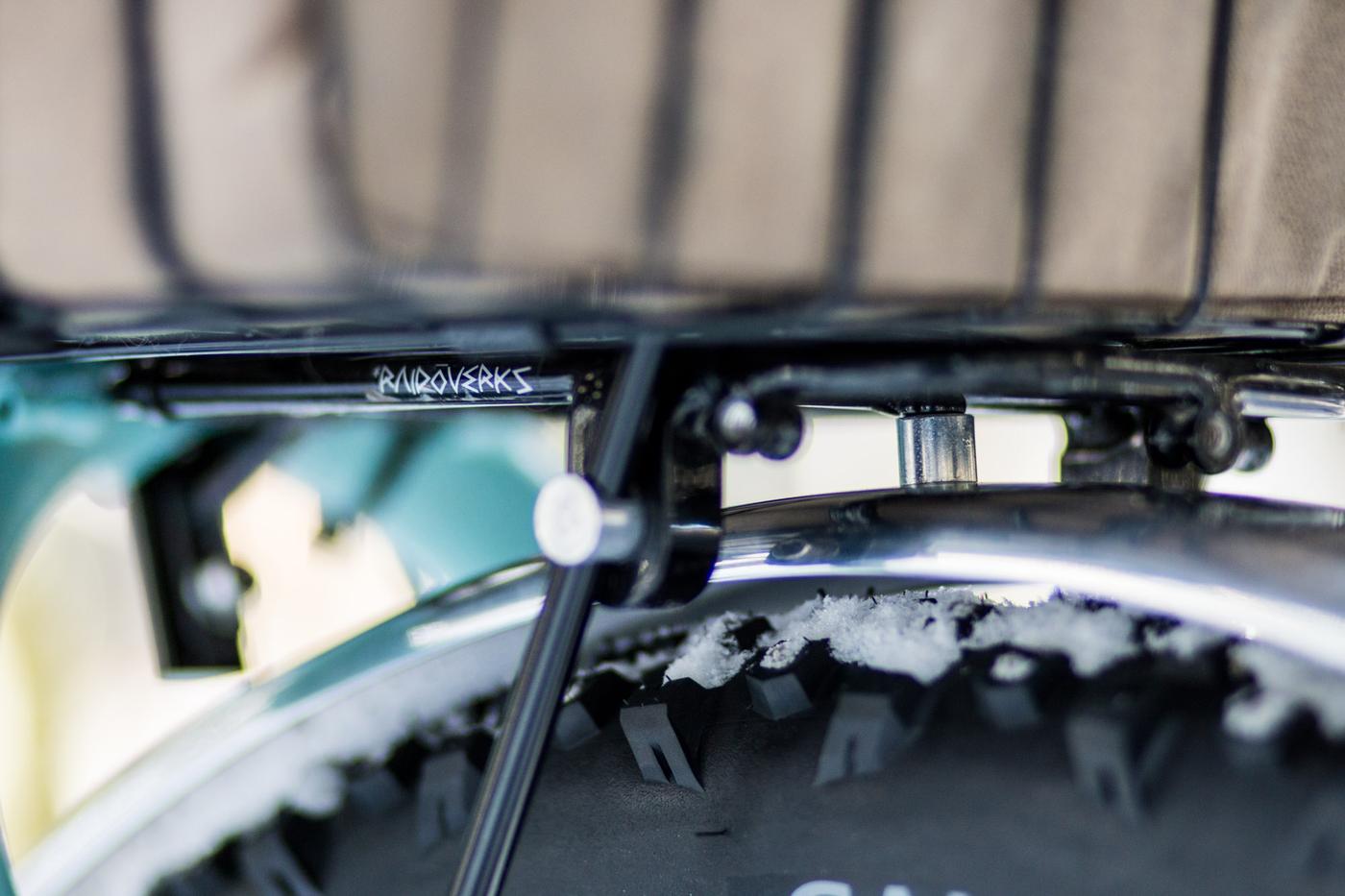 Inevitably, winter came along again. Last year, Stephanie had ridden her Wolverine to work every day on WTB Horizons through an absolutely treacherous icy winter. I was stoked she did it, but knew we could improve those bad days. The first thing we looked for was studded tires for regular 650b wheels, but alas, there were none.

On dry, cold days, Stephanie would ride the Wednesday to work. We put the Rawland Demiporteur on it, mounted to a Problem Solvers fender flute to get the rack as low as possible, and added a Wald 137 basket so she could use her Swift Industries Sugarloaf. It was definitely better than the Wolverine for those cold days – except that it had no fenders. This is the Pacific Northwest, after all. It’s pretty common to ride to work in the cold and home in the wet. 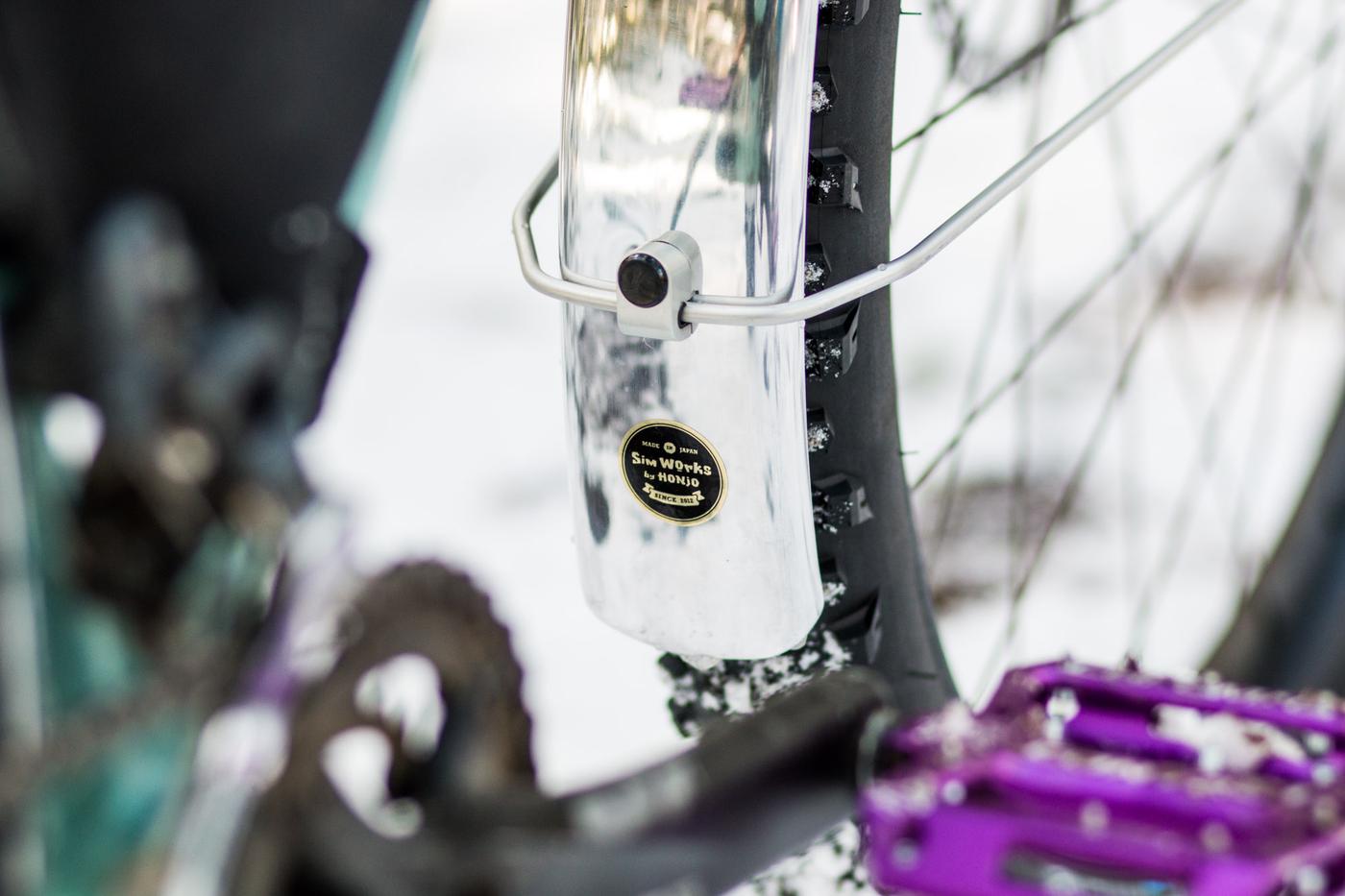 Fenders on a Fat Bike

Then, I saw that Sim Works was bringing out a new Honjo fender called the Flat 65, aka the Honjo H95. I have to admit I was pretty excited about putting Honjo fenders on a fat bike, and ordered the 29” version right away. We’ve got Sim Works Smooth 62s on our Wolverines and the quality is worth the effort. Yes, they take a long time to install, but they are lightweight, stiff and rattle-free, and stay in place wonderfully.

Initial mockup was promising, with the shape and radius working well on the existing tires. Because the Flat 65 is meant for a normal mountain bike tire, the stays don’t quite have enough clearance from the wider tires. I first did the all the drilling got the fender lines sorted before moving to modifying the stays. As you’ll see, I spread the stays outward and then added an additional bend to ensure they wouldn’t hit the tire knobs. 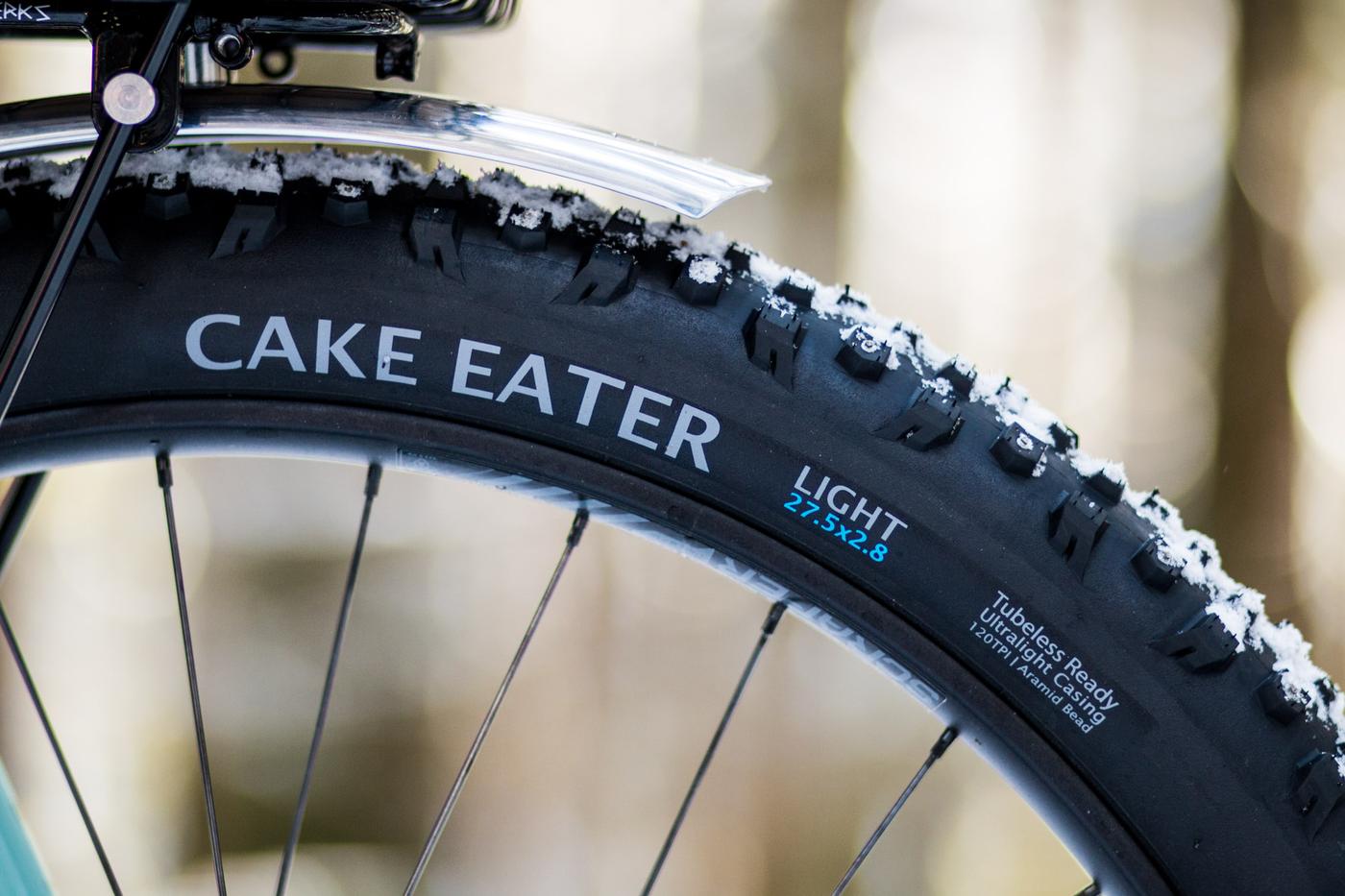 The final piece of the winter commuting puzzle was a set of studded tires that would fit under the fenders. We landed on the Terrene Cake Eater 2.8, which measured up to exactly 65mm on the i40 Scrapers – perfect. These tires are light for knobby 2.8s, and light for studded tires period. This means we end up running a bit more pressure than the Rangers, but the tubeless setup has been flawless.

The tires are pretty slow on hard surfaces – that’s to be expected. They are pretty aggressive mountain bike tires with sharp studs. It’s almost like running snow chains on your car. What you get in return is peace of mind on unplowed or unsalted roads, or iced over trails, which it turns out we’ve had a bunch of this winter. 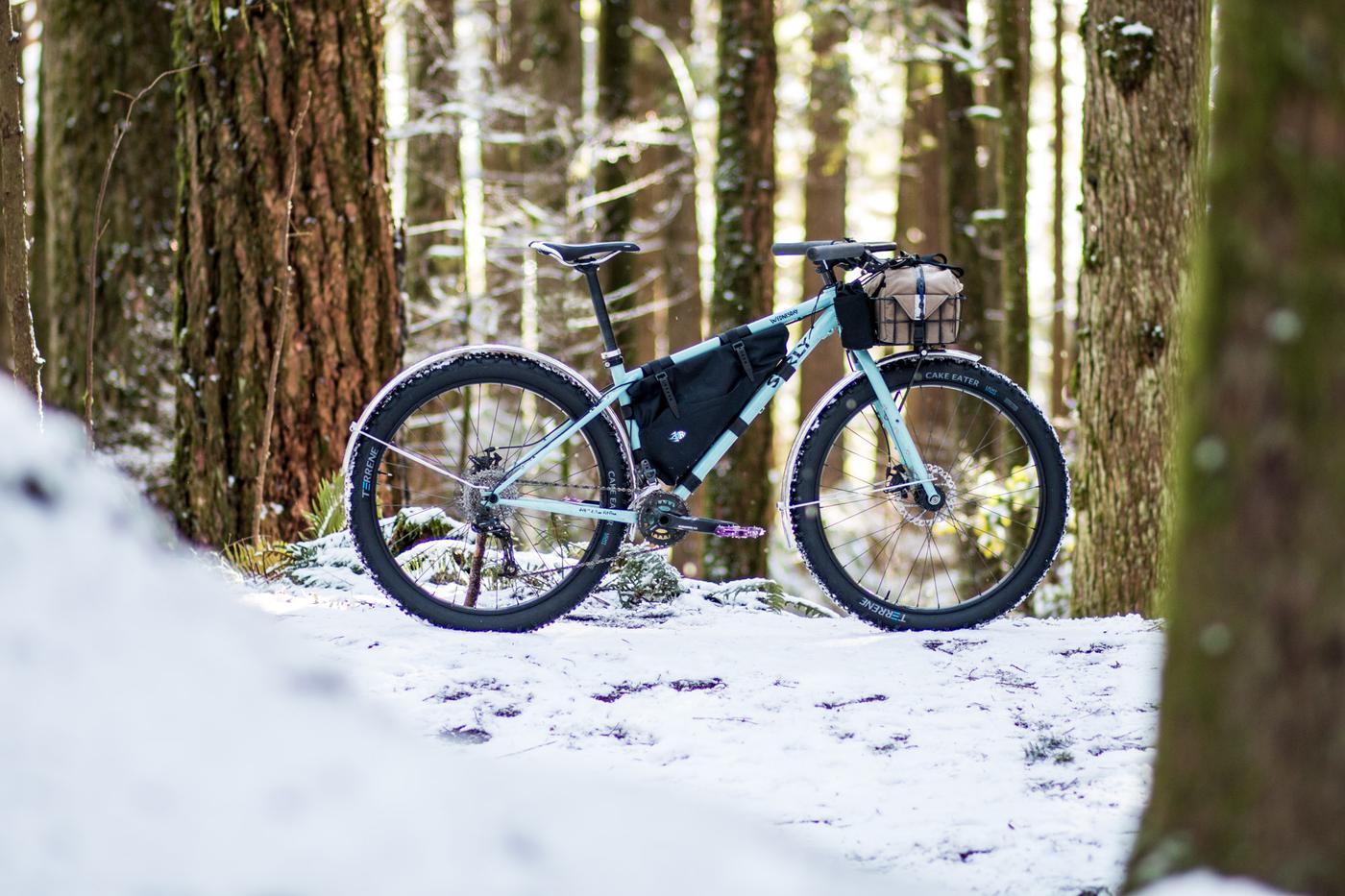 In this bike’s layers of history, I must say I’m pretty happy with this one. Having a bike that Stephanie can take to work, no matter what the conditions, is a damn cool idea, and one that keeps us on our bikes and out of the car. When temperatures are regularly above freezing again, we can put some faster tires back on for spring overnights. With another layer of usefulness and experience, Stephanie’s Wednesday has yet again proven that what you already have might just work for that seemingly oddball purpose.