When you think of the term, frame building, what kind of connotations arise? Shavings, mills, flux and steel right? As commonplace as steel framebuilders are nowadays, there are very few that are still making aluminum bikes, much less aluminum track bikes. That’s where Low Bicycles comes in. Andrew Low began building track bikes in 2010 after a he got tired of making roll cages for off-road vehicles in Colorado.

Now he’s got a small shop in the Mission in SF where he designs, fabricates and even heat treats his frames.

Check out more photos from my Shop Visit to Low Bicycles below! The almost sterile studio space where Andrew works is wrapped with a campione del monde stripe that snakes its way around the white walls. It’s a striking visual reference to what is being fabricated here: track frames. 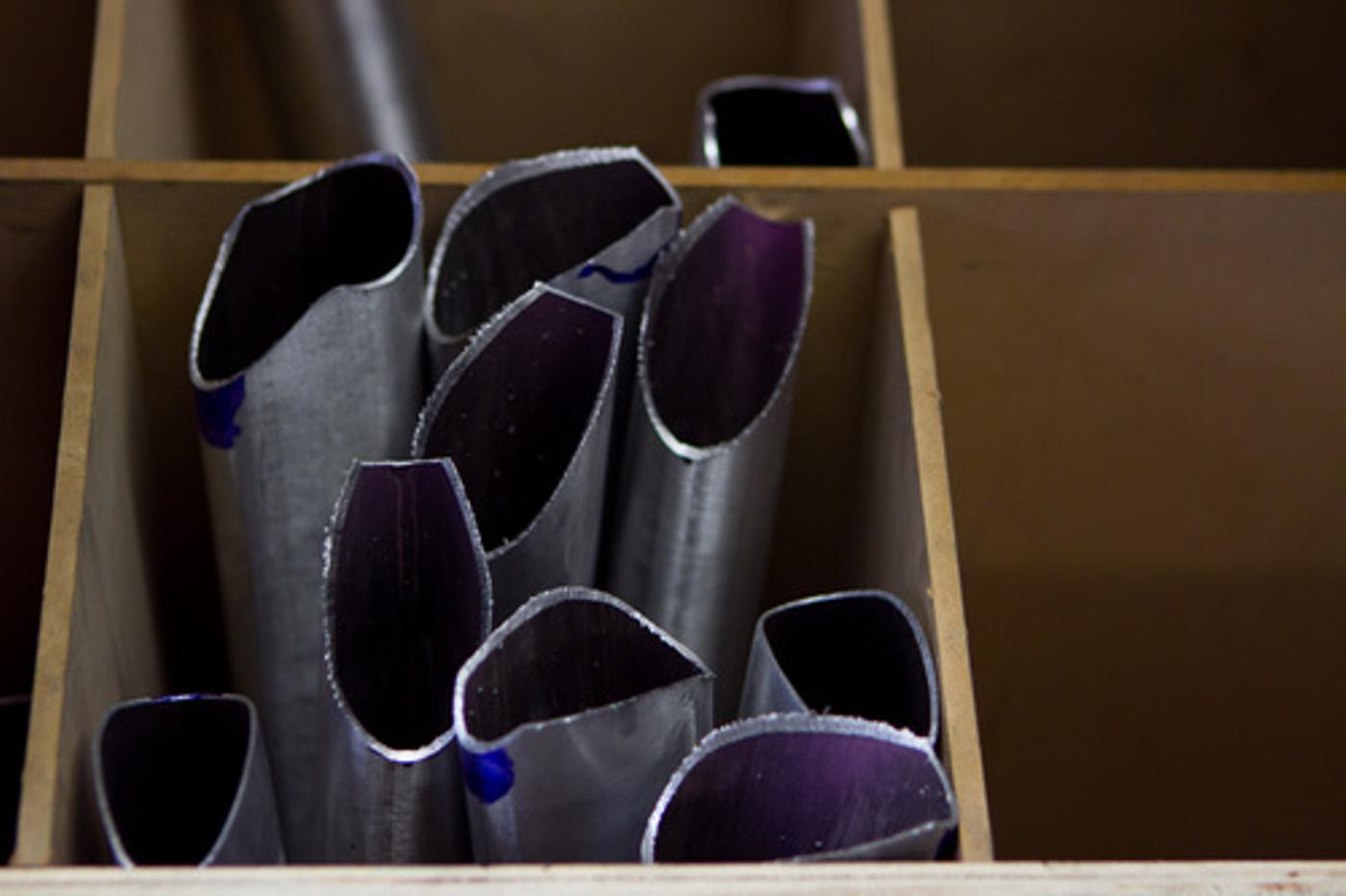 Now, I know what you’re thinking: “But Prolly, I thought steel was real?!” and I’ve got a response for that: riding in SF and watching the Twin Peaks time-trial in person made me realize something. These dudes need a disposible, stiff and light frame to do what they do. SF is less about pulling lines through traffic and more about climbing and blasting hills and for that, aluminum shows its merits. Also, the streets in that town are immaculate compared to NYC and even Austin. So the power transfer isn’t mottled by potholes.

Ok, now that I’ve addressed that, let’s move on. Andrew joked when I walked in his studio saying “sorry man, no Bridgeport here”. So this is my homage to my love for the Bridgeport. I’ve toured and walked through many frame builders and this is the first time I’ve ever seen a hacked-up armchair turned into a welding chair. Brilliant! 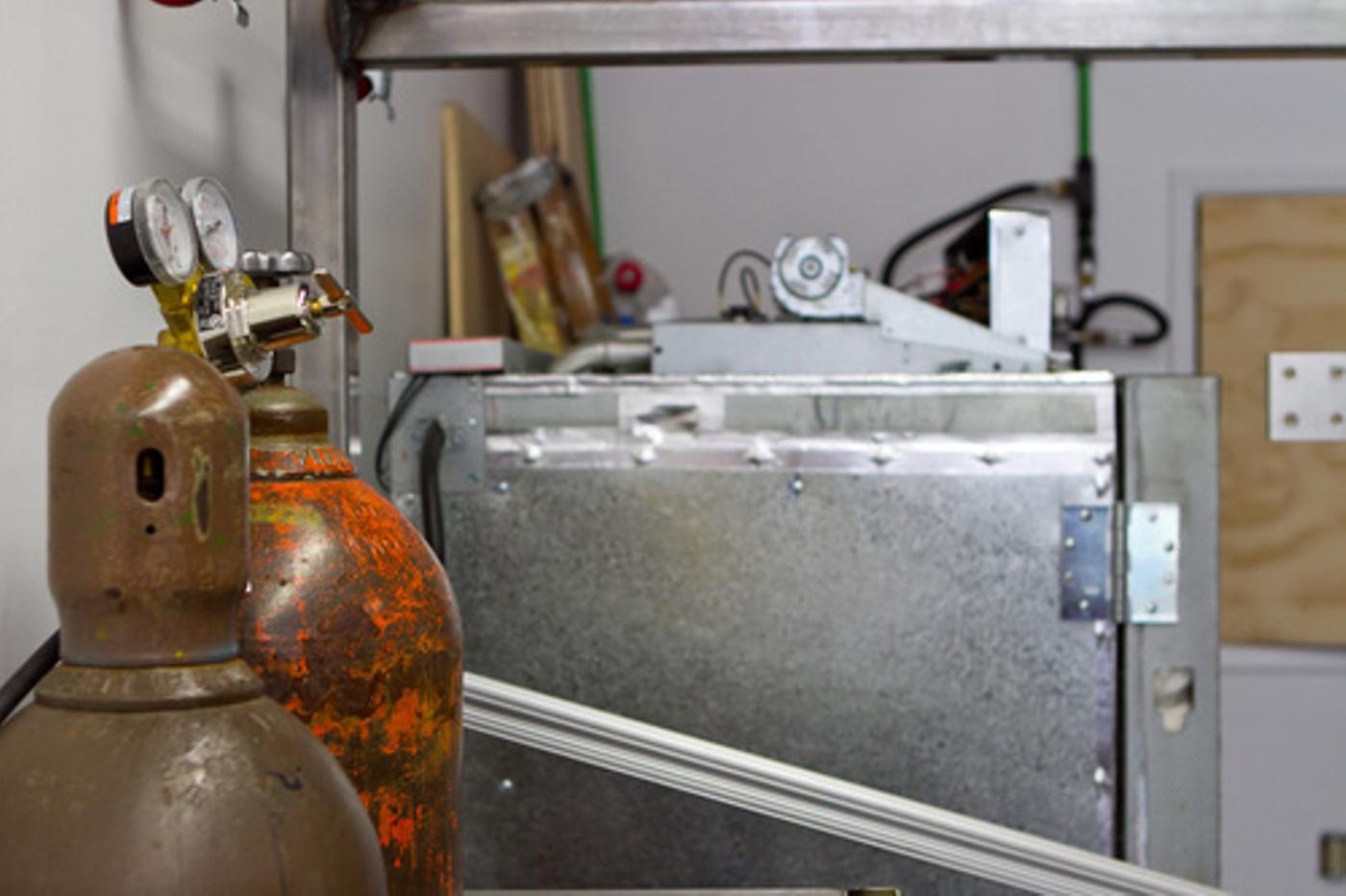 Gas tanks overlook Andrew’s home-made heat-treatment oven. He also bakes his powder coated frames in there. When the local guys were quoting $100 / frame to heat treat, Andrew got the initiative to make one himself! Still, with all the precision and pristine work areas, the bench vise maintains its territory. Here, Andrew is pulling alignments on this frame that was just completed. Checking measurements and ensuring his frames are identical is key. I know the power this blog has for companies. I’ll post about something only to have it sell out immediately or have the company’s queues rise. In Low’s case, my initial post gave him the momentum to create a few large orders. To me, that’s what this blog is all about: the love for exposing talent in the cycling industry. I’m so humbled that through all the reposts and rantings, a frame builder now has a demand. And it’s not just a brand built on hype. Andrew’s bikes have been ridden by some of the top riders in SF. Their geometry has been tweaked and Andrew’s confident that if you love the Cannondale 92’s and the KHS Aero Tracks, that you’ll love the way they ride. All for around $945 plus tax. Not bad at all, especially considering production bikes that are made in Taiwan will hover around the $700 – $800 range. By this man right here. This is Low Bicycles. Swing through or call to get on the queue. For a $300 deposit you can get on a Low sooner than you think.

I really, truly want to extend my hand to Andrew and his endevours. Dude is doing it legit and I hope this inspires others to do the same. Do what you love and do it well and people will follow!

Now, I know I say this a lot, but you really gotta head to my Flickr to check the rest of these photos out! If you’re in SF, swing through the Low Bicycles shop (by appointment only!):