I love long-term reviews. “Here, take this bike, travel with it and shred it for around six months, then send it right back to us.” Pretty ideal, huh? Especially when there’s a no-strings-attached policy. If you like it, do a review, or don’t, no big deal. Just get out and ride it. For The Radavist, that’s how I like to do product reviews: honestly and with no commitments. The problem is, you’ve got to be really stoked on a bike to want to ride it a bunch, and then photograph it / write about it.

Reviewing bikes is something I don’t often do, partially because I rarely get the chance to ride anything else besides my own bikes but mostly because so few companies contact me to review their bikes. One of the companies that has embraced what I’m doing over here is Santa Cruz and I can’t complain. Great company, great bikes and as I said before, no strings attached.

When Santa Cruz offered to send me out a Tallboy LTC with SRAM’s new – at the time – XX1 groupet back in December, I obliged! Who wouldn’t? I traveled with it, raced it a few times and rode the shit out of it for half a year.

While the world of the $8,000 – $10,000 MTB is certainly saturated at this point, I’ve ridden a few of them and yet I keep wanting to come back to the Tallboy and its unique riding characteristics. The best way I can describe the way this bike rides is solid. There’s no “plastic feel” to the frame, no annoying resonance when you hit technical sections and when the bike tells you to go in a particular direction, it’s usually on point… What often requires honing are your own skills and your confidence on that bike in particular.

This goes without saying but no bike is perfect, or else there wouldn’t be so many options. While it’s important to know what you’re getting yourself into, it’s more about understanding what / where you’ll be spending your time riding and how. Central Texas has its share of technical and rocky terrain, but it’s nothing like Utah, Arizona, Colorado, Oregon or California, not unless you drive out to West Texas. While I was traveling with this bike, it was perfect.

While traveling, I found it to take on anything. The bike is incredibly flickable, for its stance, leaving it easy to maneuver down tight switchbacks. A lot of 29’rs are so big that they lose this ability, but with the Tallboy, I never found the bike to be too big to toss around.

With the added functionality of a dropper, you can float off the pedals and bars, allowing the 140mm front to swallow up any rock garden or steps you might encounter when descending. There’s something about the way this bike handles on sharp, loose turns. Suddenly, the large wheels seem smaller and you can really lean it, while pumping through to maintain speed.

All this in an incredibly light platform. It climbs effortlessly, albeit at a higher stance than I’m accustomed to. If it’s too steep, just carry it. Just know when you get to the top, there’s nothing it won’t be able to handle. You’re literally sitting inside a machine that’s intended to rip apart trails, rather than holding on for dear life on a bike that wants to roll out from under you. 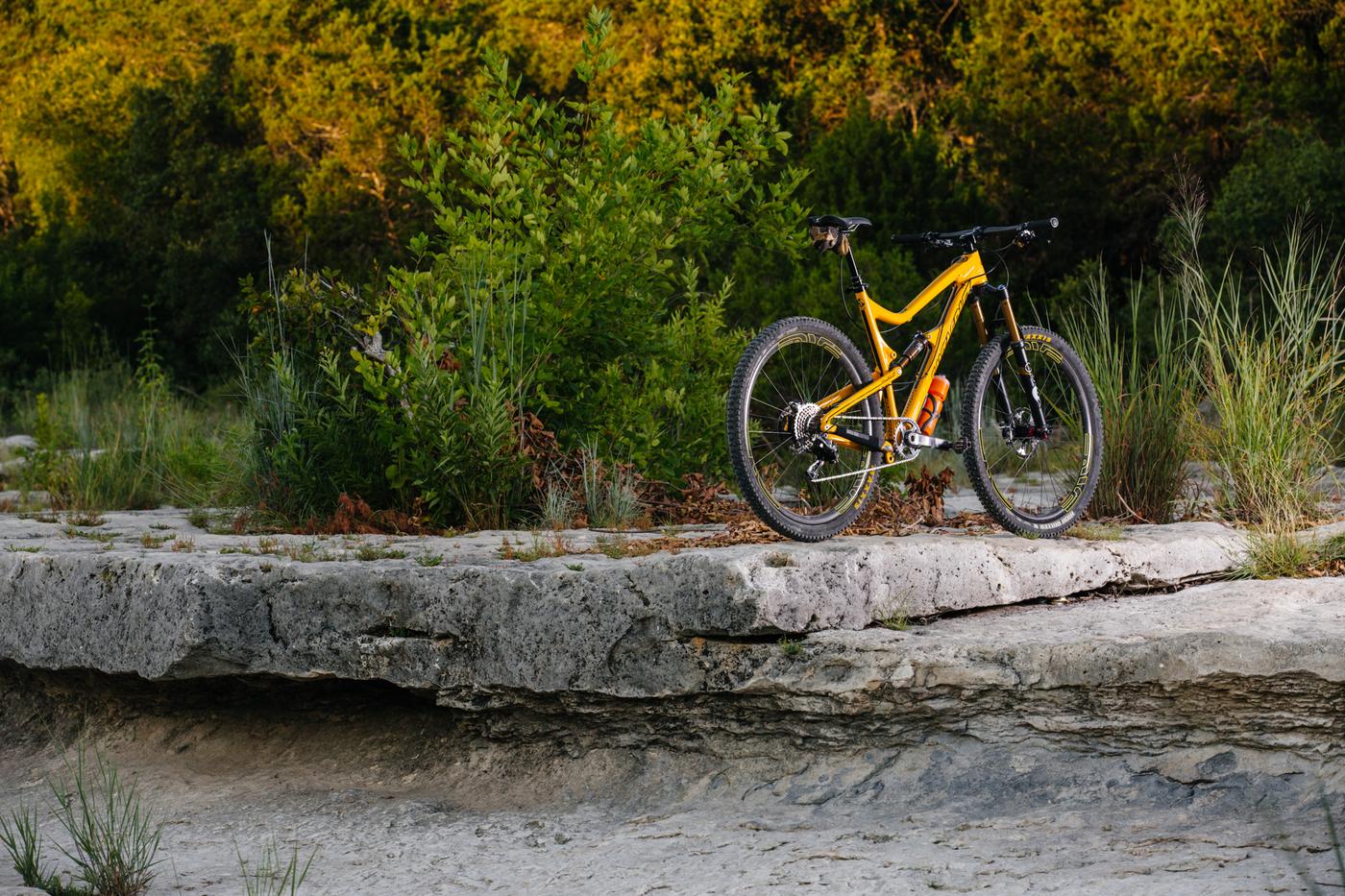 In Austin, we have a little bit of everything and a lot of rocky, steep terrain. More importantly however, is that I know the trails quite well, so they’re a good testing ground for me. Look, I’ll be honest, a long travel 29’r is in no way ideal for my trails and it might not be ideal for your trails. It was however ideal when I went to the aforementioned locations to shred. While the Tallboy LTC can tackle Austin’s technical, rocky and steep descents, it doesn’t like climbing the tight, steep, trails back up. This is by no means a fault of the bike itself, since it falls into the “all mountain” category, but moreso the fact that it’s a long-travel (Fox 34 Float 140mm front) 29’r. The wheelbase is longer than the standard Tallboy, BB is higher. The stance is confident on big trails. It’s meant to go downhill, fast and take multiple hits, all of which I can find in Austin for like 30 seconds, but the majority of the terrain isn’t best suited for the bike. I need something with a steeper head angle, lower BB, shorter rear end. Something like a standard Tallboy. Santa Cruz is great at looking at a specific need, within a market – in this case, 29’rs – and making a bike specifically for that demand. The LTC is for all-mountain, trail riding and the standard Tallboy will handle just about everything else with a few sprinkles of gnar, not a whole mouthful. In the time I’ve had this bike, I have had the opportunity to let it rip and it does just that. All without any major maintenance, save for a few issues. The Rock Shox Reverb shit out on me, twice. BUT Rock Shox offered excellent customer service and sent my shop new posts each time. Turns out, they had a bad batch – which admittedly is what companies will say when they have a defective product. Rock Shox has since fixed their manufacturing issues and this Reverb has given me no issues. Hey, dropper posts are still a relatively new technology. Shit happens. What matters the most is how well a company stands behind a product when it doesn’t work. Creaking – often due to the pivot points needing slight tightening. This only happened once. It’s an easy fix with a torque wrench and Santa Cruz’s excellent YouTube instructional videos. You can maintain this bike within your home. Right now, after over a thousand miles, my bearings are almost to the point of needing replacement. A costly but necessary note of maintenance with full suspension bikes. Luckily, Santa Cruz warrantees bearings for the original owner of their bikes! Also in this time period, I’ve done a few things:
-Shorter stem. I started with a 100mm – that was just dumb. I was used to the riding position of my other mountain bike and the Tallboy felt too scrunched up at first, but when I opted for a shorter stem, the bike handled much better, going down. Climbing and getting over the front end up steep stuff is another story… Again, long-travel 29’rs have a very upright riding position. I’ve fallen in love with the Maxxis High Roller II tire. It rules. Zero flats, just a few tiny holes from thorns which the Stans took care of. I don’t want to ride anything else. Got another suggestion? I’m all ears. Right now, I’m sold on the High Roller II. 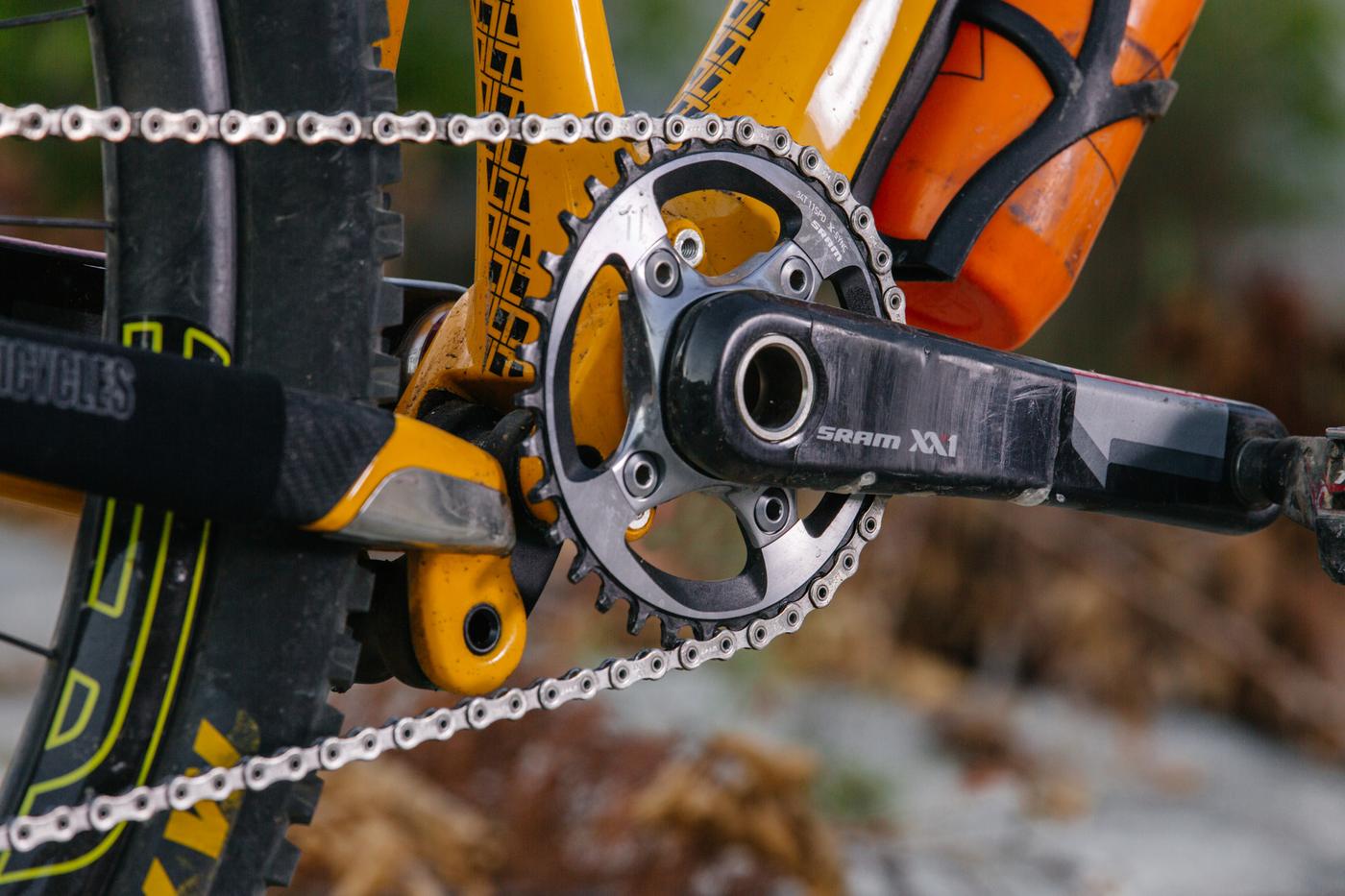 Stuff that didn’t happen:
Not a single dropped chain. Ever. Yay XX1. Also, SRAM has since offered a more affordable group to their 1x line… X1. Fork or shock issues. Zilch. I maintained them only by putting in the correct PSI with a shock pump. Seals are still good. Brake bleeding issues. Not a single one. XTR brakes are amazing. Wheel trues. Nada. Strong as shit, stiff as shit, reliable wheels. They’re expensive, but after using these wheels for a few months, I’m sold that they are a truly worthwhile investment, if you can drop the coin. For me, I think carbon MTB wheels outweigh any performance benefit you’d expect from a carbon road wheel. Just my two cents… All in all, I’ve spent around $150 on this bike, which was only from servicing the Reverb. For me, that’s a testament as to the world of higher-end MTB equipment, more than my own ability to maintain a bike. I rarely get the chance to ride, so when I do, I grab and go, often returning to work promptly (river crossing or not). I’m bad at keeping on top of things, which is why I take my bikes to Mellow Johnny’s and have their pros take care of my issues… With this bike, I have had zero mechanical mishaps.

All I really wish this bike had was a second bottle cage. Somehow. Reviews are hard, because you want to be honest and you want to be thorough, all while adding catchy adjectives and trying to paint a picture of what it’s like to ride a bike. That and they take a long freaking time to write and photograph!

All I can say here is that with all the 29’rs I’ve gotten to ride over the past seven months, the Tallboy has been my favorite. If I lived in SoCal, Colorado, Utah or Arizona, I’d keep an LTC in my stable. Hitting the trails in places with legitimate descents was a blast and it’s unfortunate that I don’t have those conditions here at home, because I feel like this bike belongs on the mountain, not in the hills.

Luckily, Santa Cruz has other bikes in their fleet better suited for my local riding… 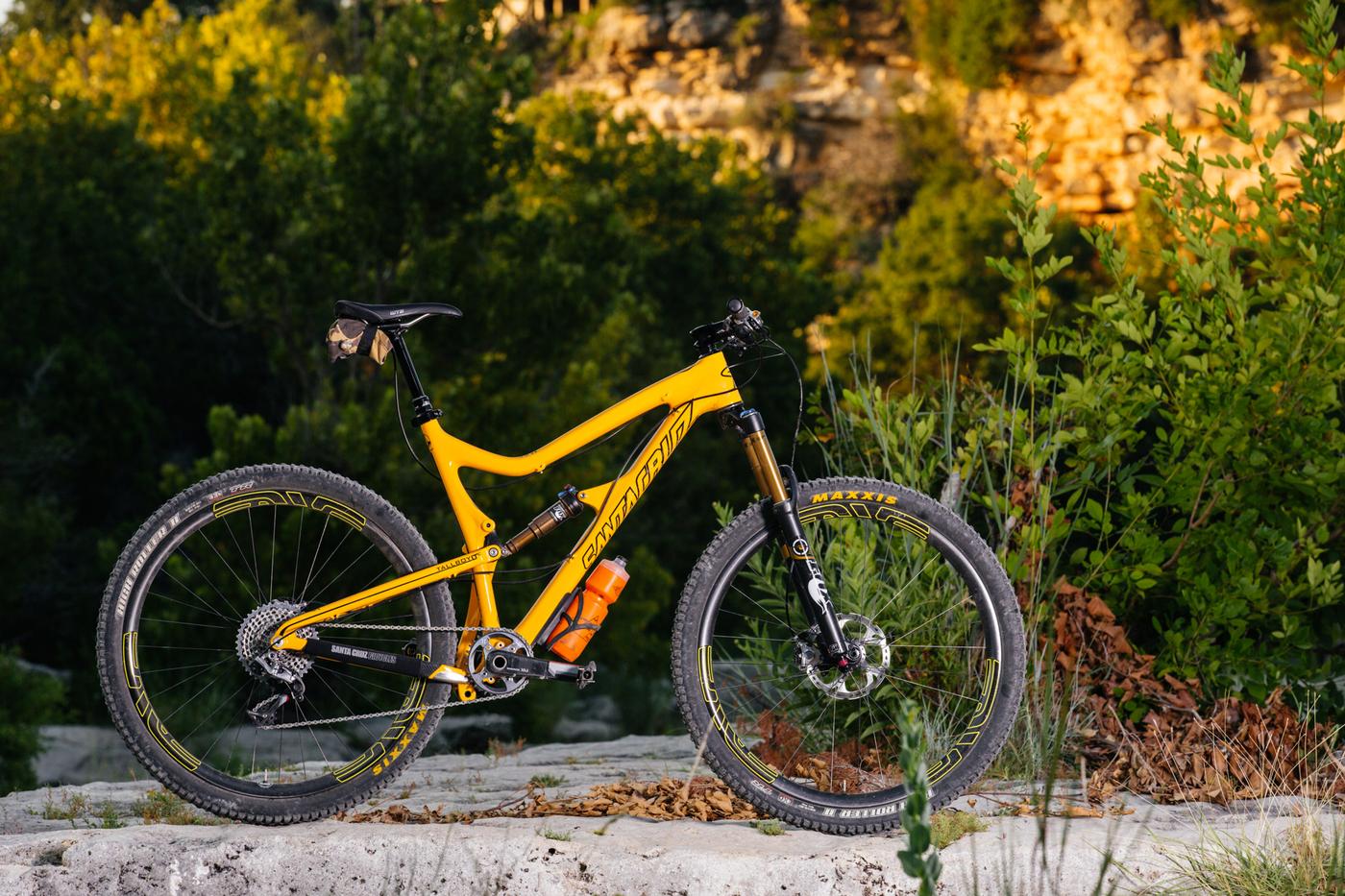 The Santa Cruz Tallboy LT is available in aluminum (which also kicks serious ass) and carbon. Build options come in around $2,999 for a complete aluminum. Carbon completes start at $3,699 and go all the way up to $10,000 as pictured with XX1 and ENVE wheels. The components are one thing, but the geometry is what really matters and the Tallboy has that dialed.