When a bicycle rolls in the doors at GSC, Scotty’s brain begins to analyze it, no matter the type, and can pick out the idiosyncratic details faster than even the grumpiest of bike wrenches. The main difference being, Scotty is there for the love and the interaction with human beings of all race, creed or gender identity. This same thoughtfulness goes into his own creations – his bikes – and it is these bikes that have always intrigued me. The problem is when something is so accessible, so familiar, oftentimes you pass on documenting it. Or at least for me anyway. 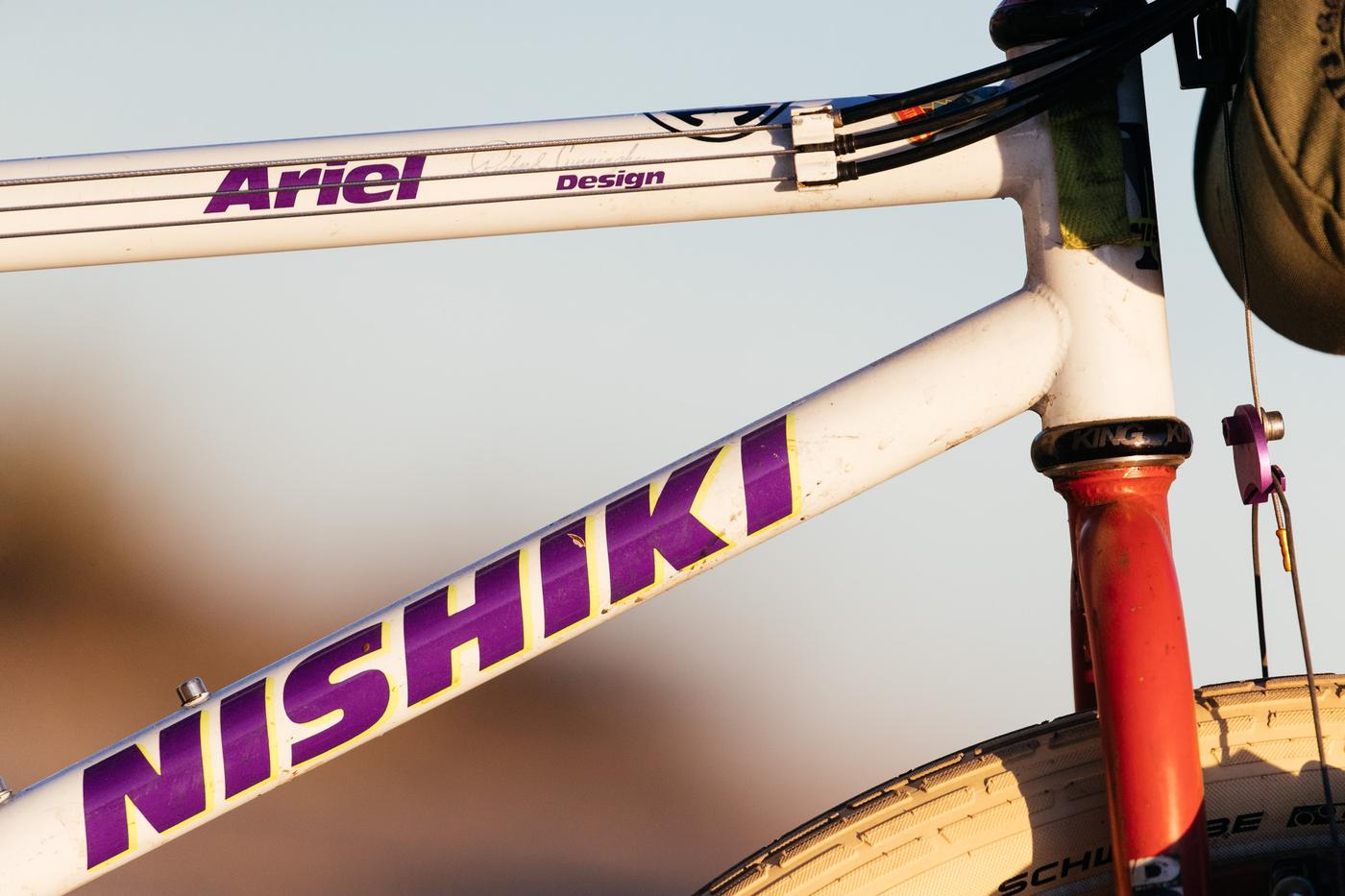 Beauty may be in the eye of the beholder, but when one’s gaze is as wide as Scotty’s it’s intoxicating. His Nishiki Ariel is from the early 90’s – you can tell from the 1 1/8″ head tube. These Richard Cunningham-designed – yes, the same Cunningham as Mantis fame – bikes were made in the USA by one of the many production houses found here Stateside during that time period. All my research, or at least patience, couldn’t find who made these frames, or where, so your guess is as good as mine. What I can tell you about this bike is, it has a Direct Drive Specialized fork, painted red so Scotty can find this bike in case of a house fire, is filled with MUSA parts ranging from old MUSA Salsa skewers to an OG Phil Wood front hub, PAUL touring cantis, White Industries cranks and other tidbits. Because Scotty loves Shimano, he used a long cage derailleur to make this bike pedal with ease up the mountains which he loves so much. Inside his bags are staples of a wandering bicycle operator. Including a spare chain, chain tool, snacks, pump, layers for the LA winter and sometimes even sleeping equipment for a quick overnighter in the San Gabriel Mountains. When the cold weather rolls around, Scotty breaks out his magic bear suit which acts as camouflage for bandit camping, as well as supplies him with warmth. As far as his Bedrock Sandals and socks, well, he doesn’t like wearing heavy-soled shoes around small animals like Campy the GSC shop dog. Yes, Scotty is an amazing soul and one that I’ve greatly come to appreciate over time. Shooting these photos were a complete joy and I hope to document his others bikes this year. Follow Scotty on Instagram and feel free to dive right into conversation with him the next time you’re at Golden Saddle Cyclery.