TRUST ME, I’M A DESIGNER

As a designer of bicycles I try to stay on top of things like material development, new alloys, paint pigment, flakes, pearls, platings and whatnot. It’s in my interest to stay updated in an ever-changing world. What you see on the floor in a bike shop is not just a bicycle with a random color: it’s the result of hundreds or thousands of hours of trial and error behind the scenes at any one man bike shop or huge bike brand with a fleet of designers.

That one color started out as 666 other potential colors and in the end, only one made it. For the one man operation or smaller brand in a well-defined niche it might be easier to do cool and crazy shit to please that one customer with that weird request of a thermochromatic dead matte black that fades to metallic peach with a pride parade pearl to top it off. I design bicycles for a global brand and need to create a bike that pleases a global rider and as you all know, trends and cultural differences around the globe vary, fluctuate and make my day pretty complicated.

I’ll be honest with you: it’s frustrating to rarely ever be able to bring the raddest and weirdest stuff to you. One example is the one off Full Nuke Rainbow AWOL I created for the Transcontinental Race, a bike that almost blew up the internet when John posted it. So much stoke and love was thrown on that bike but the reality is that it would be impossible to produce it, guarantee the surface quality, get a decent price and distribute it to you. Doing rad stuff is easy but mass producing it is a completely different story. So, I try a lot of surface treatments and materials but most often these tryouts, experiments never leave the design studio as more than dirt on my hands, stains on my jeans and once in a while, a painted one off bicycle that I can tell you about.

The Rust AWOL is my wife Sofia’s bike and it used to look quite different. A super glittery rainbow flakey touring bike that was left in the hands of Garrett Chow on a journey to the heart of Death Valley early last winter. The washboard and dirt in Death Valley eat bikes for breakfast and the beat up bike that was returned to her had a couple of scars too many so I promised to bring it back to its “old glory”. The frame is one of the first nickel plated frame samples for the Transcontinental Edition AWOL we did and a perfect canvas to be creative on since the nickel makes it completely sealed for corrosion – ironic isn’t it? Rust is corrosion and in this case impossible to achieve without some chemical magic from a UK paint company called Rustique. 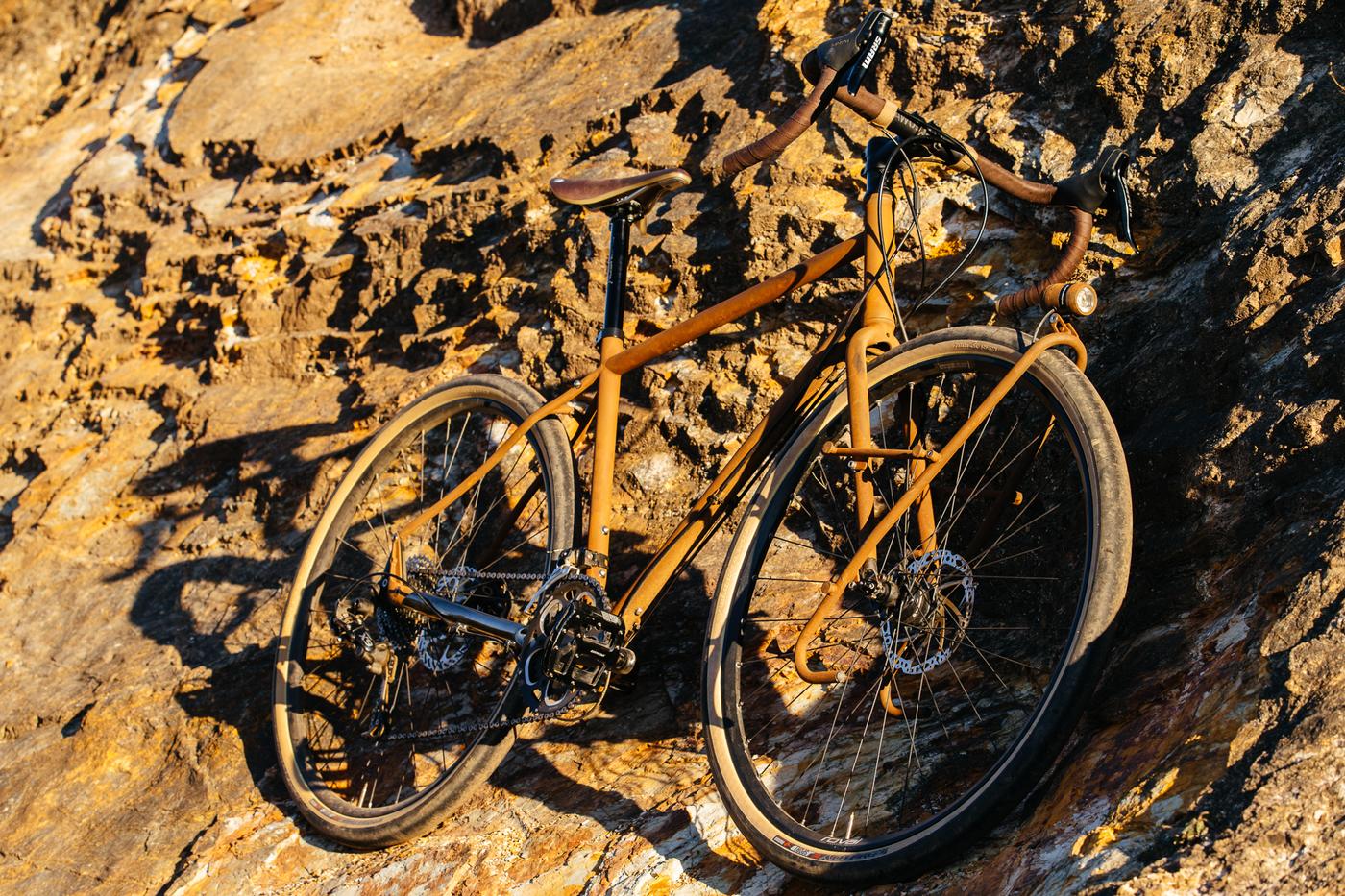 My colleague Barry Gibb had previously used it to create a fantastic surface on a carbon bike and I wanted to try it to, on steel this time. We ordered some paint and decided that Sofia’s nickel plated bike would be the victim for this experiment. The month of June is usually pretty mellow at work (read: not as completely fucking crazy as July and August) and I spent some afternoons in the workshop and paint booth to finish off this creative experiment in an effort to bring real organic life back to a surface that’s dead. In a step by step series on Instagram, I told a transparent story about the process of the #rustawol and here it is and for the first time, a somewhat finished bike. The project was crowned with a Brooks Cambium rust saddle and bar tape where the fabric matches the bike and the vulcanized rubber matches the tan wall tires nicely. As a last step I gave the Supernova headlamp and the Tubus rack a kiss of iron oxide. The humid and cold San Francisco summer will continue to corrode and oxidize the surface even though it’s been sealed with a clear coat as I surprisingly discovered after picking up the bike today. I learned a ton on this project, got my hands dirty and created a bike that Sofia really seems to like. I love that I sometimes can show you the hands-on process of being a designer at a big brand when 90% of my work never leaves the design studio. Confidentiality keeps us all from sharing what I know a lot of you like seeing and know more about.

Personally, the making-of-dvd in the Indiana Jones DVD box is far superior to the movies themselves and getting dirty is the only way to learn something new.