Riding Through What Remains
Words and Photos by California Travis

It’s been one month since that morning but it feels like so much longer, and the ruins look like they’ve been rusting in the elements for years. On November 8th around 7:30am I started a group text about a Thanksgiving Day ride and by 8am it had turned into people sharing photos of a smoke plume southeast of Chico that looked rather ominous. I took my own photos on my ride to work at PAUL Comp, because with half the sky and the rising sun being blocked by thick black smoke, the effect was very dramatic. Living in Norcal, we’ve gotten pretty used to fires, so didn’t think too much of it beyond how cold and dark it was with the sun blocked out most of the morning. When our accountant showed up to work from Paradise looking frazzled saying there was an evacuation order, things started getting very intense very fast. It hadn’t rained at all since spring and the area was so dry we had to use a cement drill to put stakes in the ground for our cyclocross race the week before. With high winds, the fire was spreading extremely fast. I texted my mother and stepdad who lived in Paradise to check on them. They had headed down the hill to Chico for work and were halfway down the hill when they got the evacuation order, so by then, it was too late to turn around and grab any valuables or photo albums. 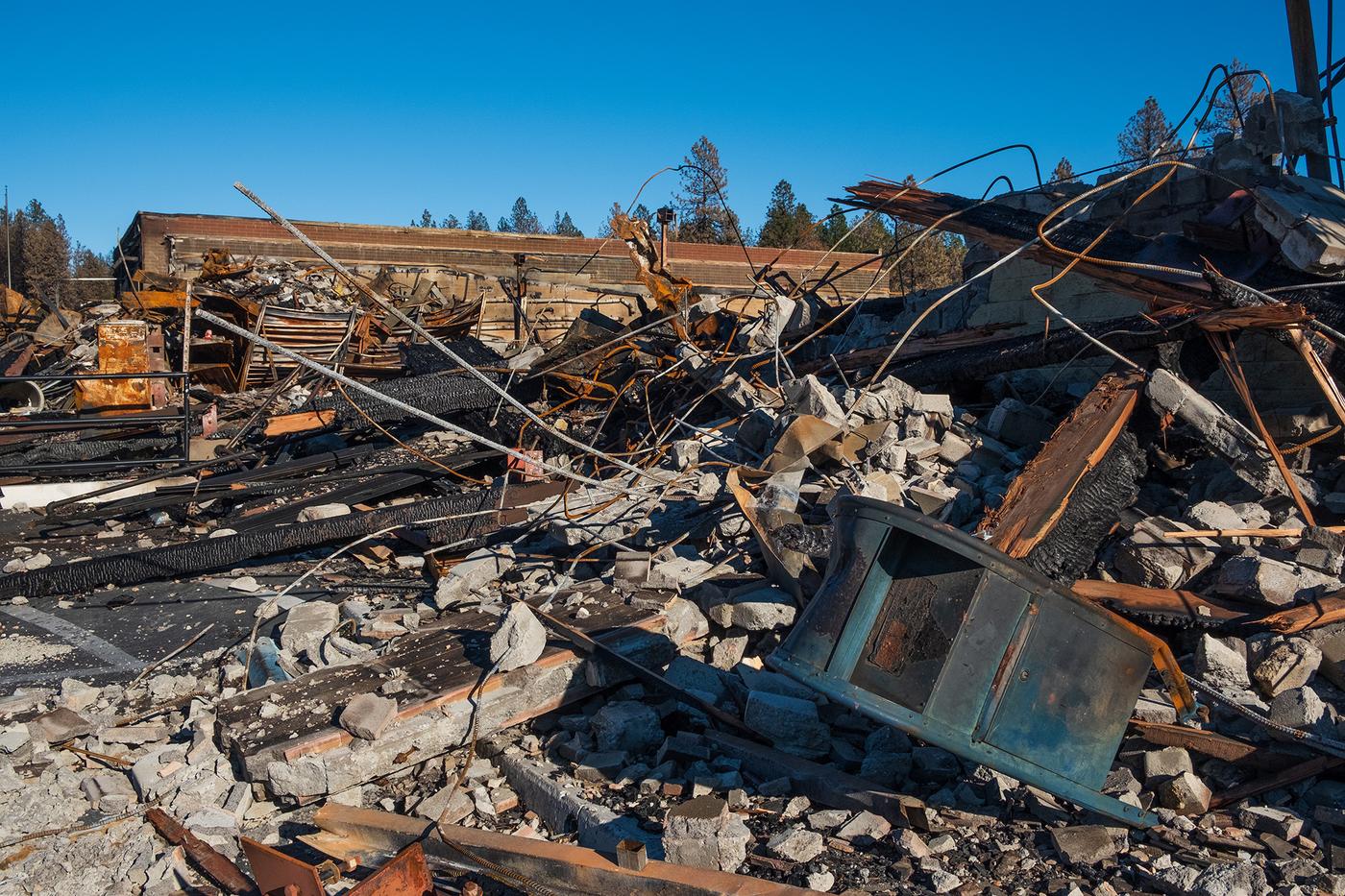 Our accountant was worried about her husband, and when he burst in the door smelling like smoke with a cellphone video of driving his truck through a tunnel of flames it quickly became apparent this wasn’t a drill, Paradise was burning, and it was BAD. 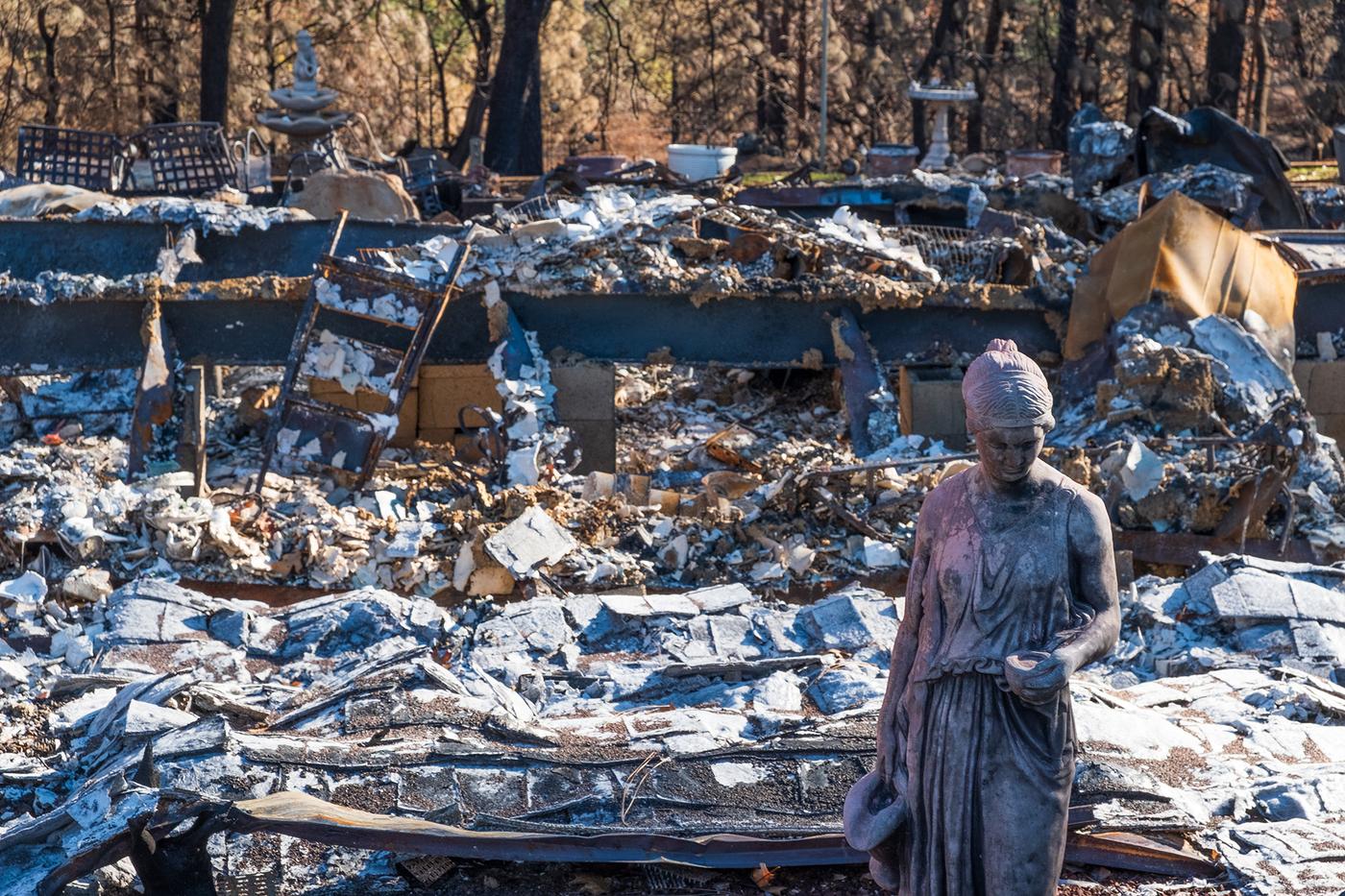 None of us were getting any work done as we were all on our phones checking in on family and friends and updating each other on the news, and we decided to close up shop for the day. The fire was spreading 3 football fields per second and Chico might be in danger too. I hopped on my bicycle and weaved through Chico. The traffic was gridlocked as 52.000 people evacuated the Paradise area for Chico. As soon as I got home I filled water jugs, packed a bug-out bag, and cut through traffic on my motorcycle to top off the gas tank. With the sun blocked off by smoke, lines at the gas stations and stories of people evacuating Paradise having to get out of their gridlocked cars and run, my life started to feel like one of those movies when shit really starts to hit the fan. At my house the radio stayed tuned to the news for the next week straight and on the first night, I lay awake all night listening for an evacuation order while my parents stayed in our guest room. The city of Chico quickly went from gridlock to ghost town. All the students bailed, the businesses closed up, and a lot of people decided to play it safe and left. It was raining ash, and the sun being blocked out by smoke for the next couple of days was confusing our biological clocks. What would soon be known as the Camp Fire wouldn’t stop burning until it was finally extinguished fully by rain on November 26th. As of today, the death toll is 85 people, with 11 still unaccounted for and a staggering 153,336 acres burned, 14,000 dwellings destroyed, and 52,000 people displaced. My parent’s home and everything in it including their lifetimes of sentimental belongings, art by family members, and photos albums were reduced to such a small flat layer of ash. They’re still living with me, as the housing situation in Chico is overwhelmed. Temporary shelters were maxed out and tent cities sprung up in places like the Walmart parking lot. With Chico saturated by a haze of toxic smoke, we got used to walking around with N95 masks on, and I drove around with a sprinter van full of clothing donations, trying to help where I could. The fire is out, but the homeless situation is overwhelming. Some people were just scraping by in Paradise, and many will now fall through the cracks. Red Cross has bounced, and FEMA still hasn’t given out anything more than case #s. The majority of the displaced are being helped by the efforts of local citizens more than any government assistance, of which it is very little. I adopted a kid named Chris from the punk scene that lost everything, and a 74-year-old contractor named Tommy who lost his home and all his tools (and thus his income). I’ve been trying to get their needs met, mostly with money, to float them through until they can find an amount of self-sustainability. The generosity of my friends and strangers I’ve never met came pouring in, with clothes, shoes, cash, a van, and tools helping those in need. It’s hard to tell at this point what the long-term effects on Chico will be beyond house and rental prices skyrocketing and the homeless population swelling. Paradise is still closed to the public, with PG&E trucks scurrying about putting up power lines everywhere and sheriff vehicles patrolling. As I rode around on Thursday, the amount of destruction was just mind-boggling. You could stand and stare in wonder at how fire destroys everything in just one building, and when you multiply that times thousands, it’s just hard to process. In these photos, you’ll see a few homes, cars, MAP Bicycles shop (and what’s left of his mountain bike I used to lust after), a Safeway, a museum, a yogurt shop, a school, a jewelry store, a trailer park, a couple diners, and a liquor store. All that’s left of Honey Run’s covered bridge are a couple of rusty beams. Like most of the rubble, it looks like this event happened years ago, as the fire strips the paint off metal, turning it to rust after one rain. It’s more destruction than I’ve ever seen in my life, and after seeing so much of it in one afternoon, I laid awake all night, my brain and emotions still trying to process what it means for so many people to lose so much. Paradise will rebuild. The post office, DMV, movie theater, Taco Bell, Hospital, Cozy Diner, Ace Hardware, Rabobank, and K-Mart and one of the schools still stand among some other businesses. A few homes are still intact and undamaged. Street sweepers and utility companies are like busy ants, preparing the infrastructure for the next step, which is removing all the debris. It’s hard to fathom where it will all go and how long it will take.
Preparing to write this article, I still found myself a bit speechless. The end of this story is still so far away, and for many, this won’t be a just the next chapter in life, but a new book completely.