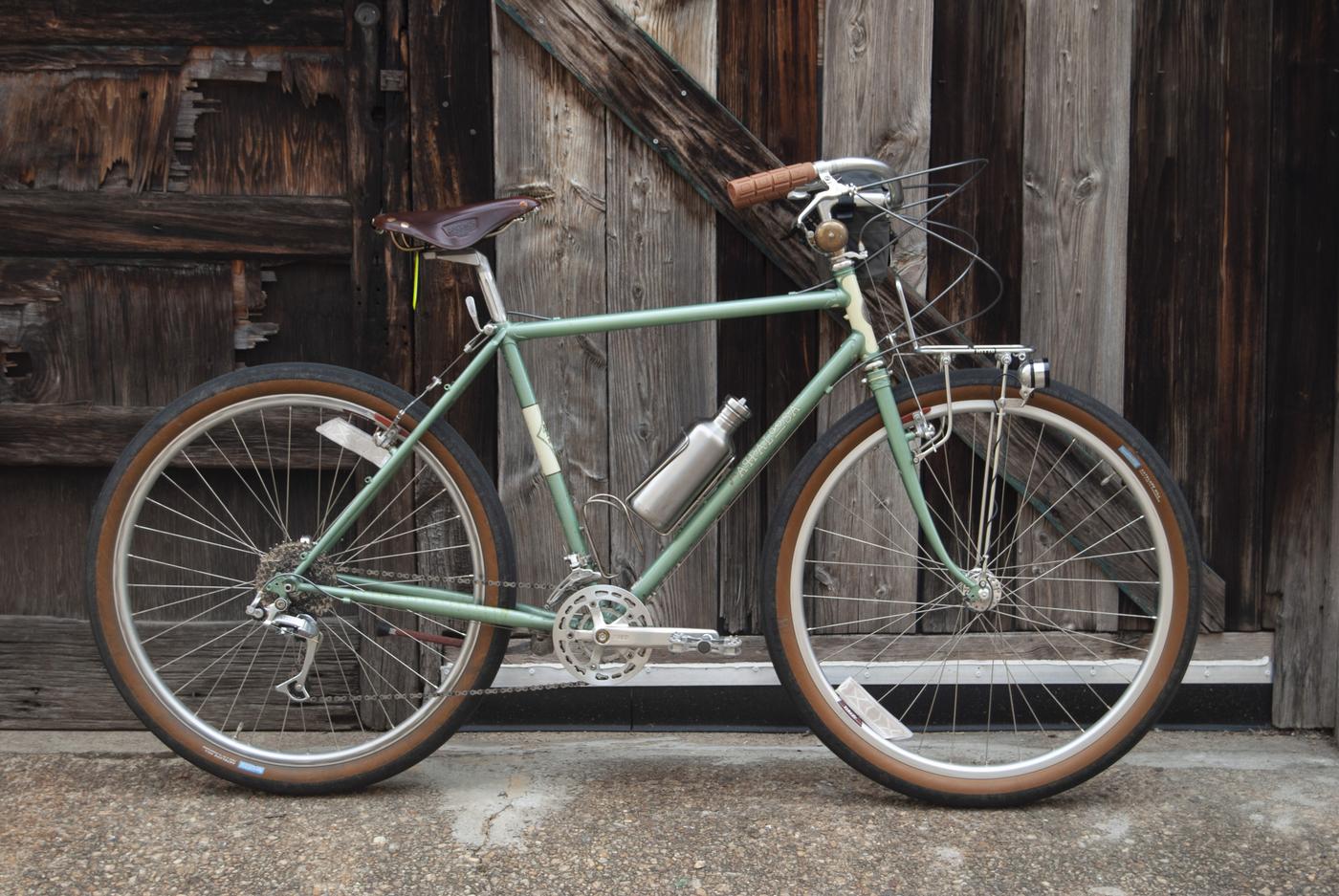 Our Readers’ Rides showcases builds from the readership. Sometimes they’re succinct and to the point and other times, we get wonderfully penned novellas, waxing poetic about their beloved bikes. These submissions are part product review and part passionate penning. This week is one of those submissions. Eric’s Rivendell Appaloosa was featured in Wednesday’s Radar Roundup, albeit in video form, so let’s check it out in words and photos below! 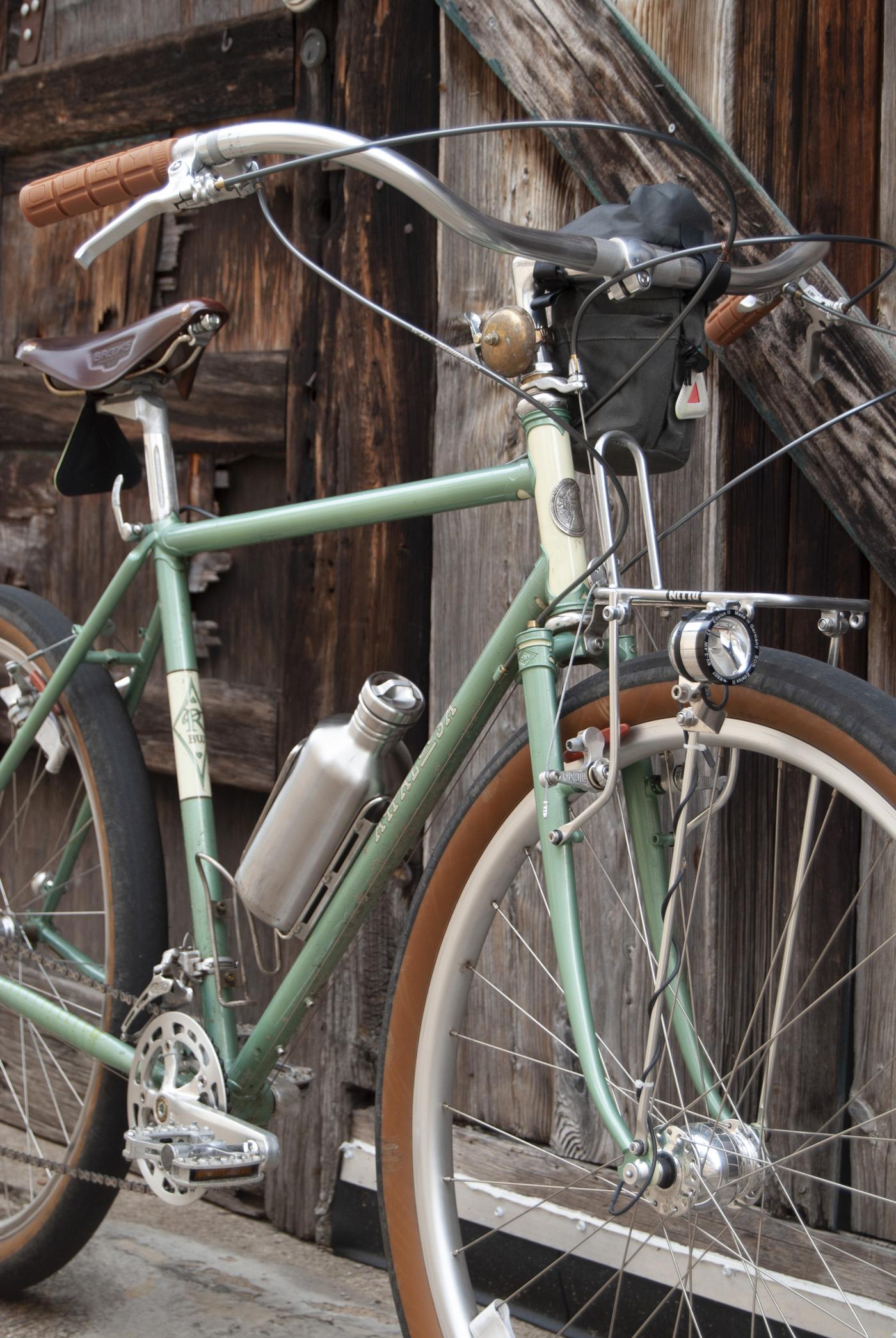 The Appaloosa was the first Rivendell frame that caught my imagination and started me dreaming about lugged steel, sweeping handlebars and fork crowns that could clear a plump pink grapefruit with ease.

From what I understand the Appaloosa started out as a functional clone of the Atlantis. The Appaloosa was made in Taiwan as a slightly more affordable option over the Atlantis frames which at the time were made in Japan at Toyo. Back then the Appaloosas came in a delicious mustard color. While my real dream Riv frame is a 59cm Atlantis with the second rainbow top tube I am precluded from that size by my pubic bone height. Perhaps a spa session on a medieval rack could get me those extra few centimeters.

With that Atlantis out of the picture I geared up for Riv’s Appaloosa sale in the summer of 2021. The frames sold out in something like five minutes, it was utterly insane. I had the frame built as a complete; Will Keating helped me with the specifications and it was assembled by mechanic Mark Abel. 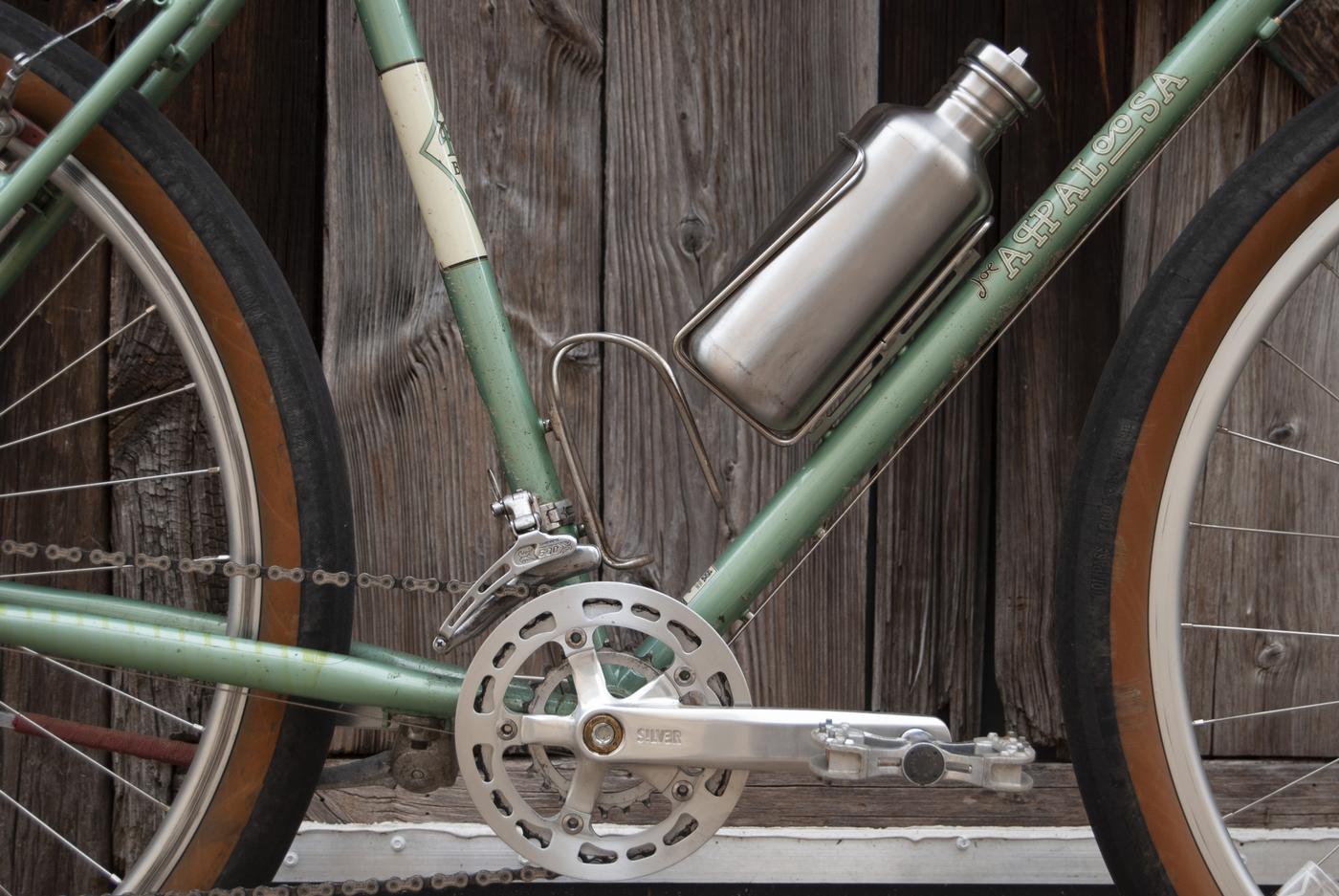 The bike has been great, a beauty, a dream, everything I’d hoped for. Fun on trails, great around town. I enjoy taking it out for long rides in the mountains with long climbs on loose stuff and sketchy descents on country roads with deep rattling washboard. And it’s a great grocery cart, I roll it through our local co-op and fill my bag with groceries and then roll right out. Try it! It saves a few steps from locking up, loading and unloading. The idea that Riv makes all-around frames is actually true.

And yet there was this irresistible impulse to noodle around and tune it up a bit. The modern Deore mechs work great but they’re a bit dark and clunky looking given my taste in more classical bicycle parts. I started to keep an eye out for silver components. 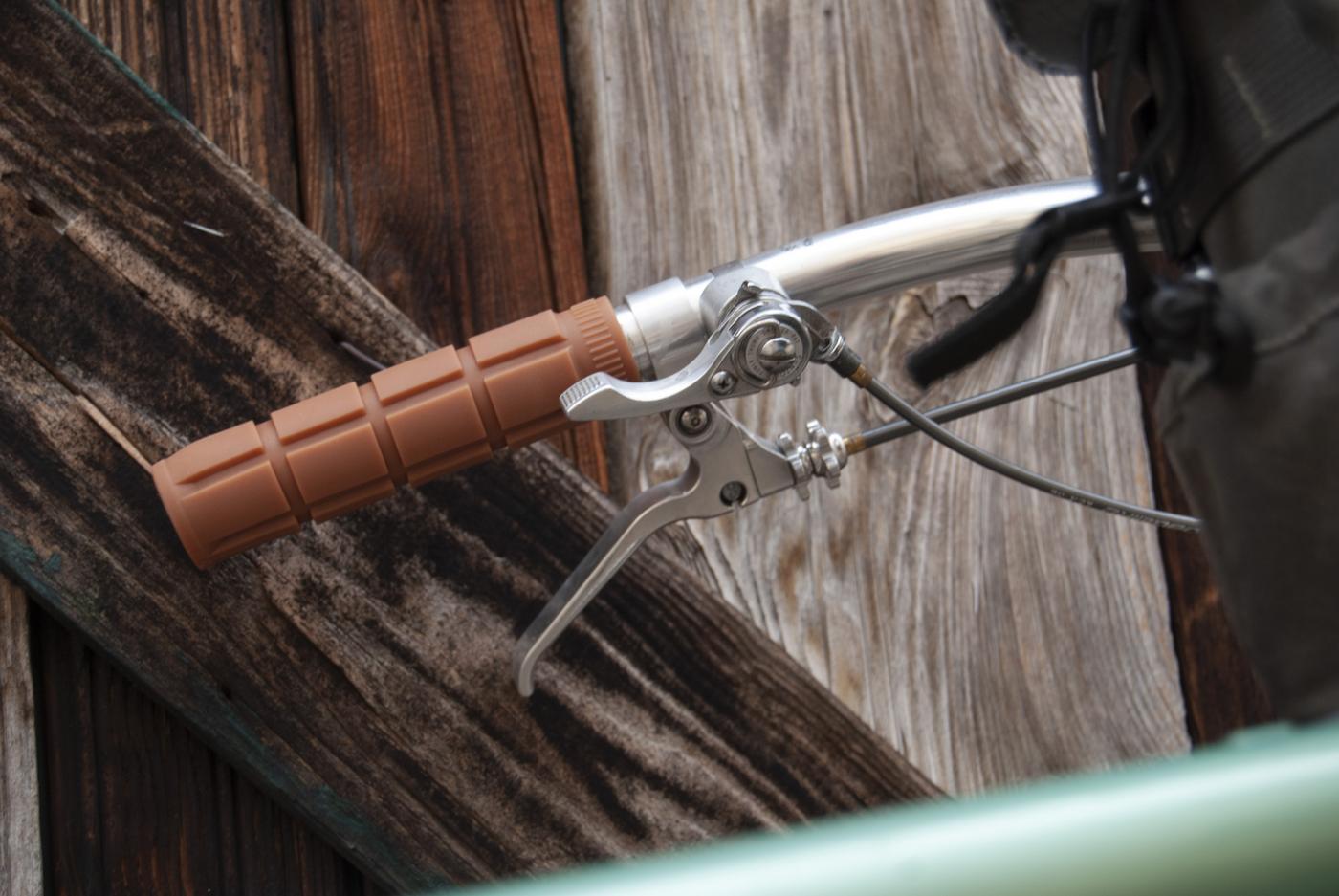 When Dr. Ronnie Romance announced the Orthopedic Back Bars (a production version of his bench-twisted Nitto Bosco bars) I took note, these were the widest bars with the absolute most sweep back of any bar I’d seen. While I loved my Nitto Billie bars I was jabbing myself with my bar-end shifters and I needed to salve my thighs after a long day in the saddle. As it turns out those Ortho bars are made from 1000% pharmaceutical-grade unobtainium and seemed to disappear from the market before they’d even arrived.

After many calls to my insurance company and spending what felt like several days of my life listening to hold music and recorded announcements that I could, in fact, pay my insurance premiums online, I was able to get a referral to Dr. Romance at Nutmeg Orthopedic Associates. The best in the biz, so I’m told. (I hear he has a second office just for the wall space needed to display his diplomas, accreditations and life-time honors for his part in local pancake breakfast fundraisers for kids who ride low thread-count tires.) 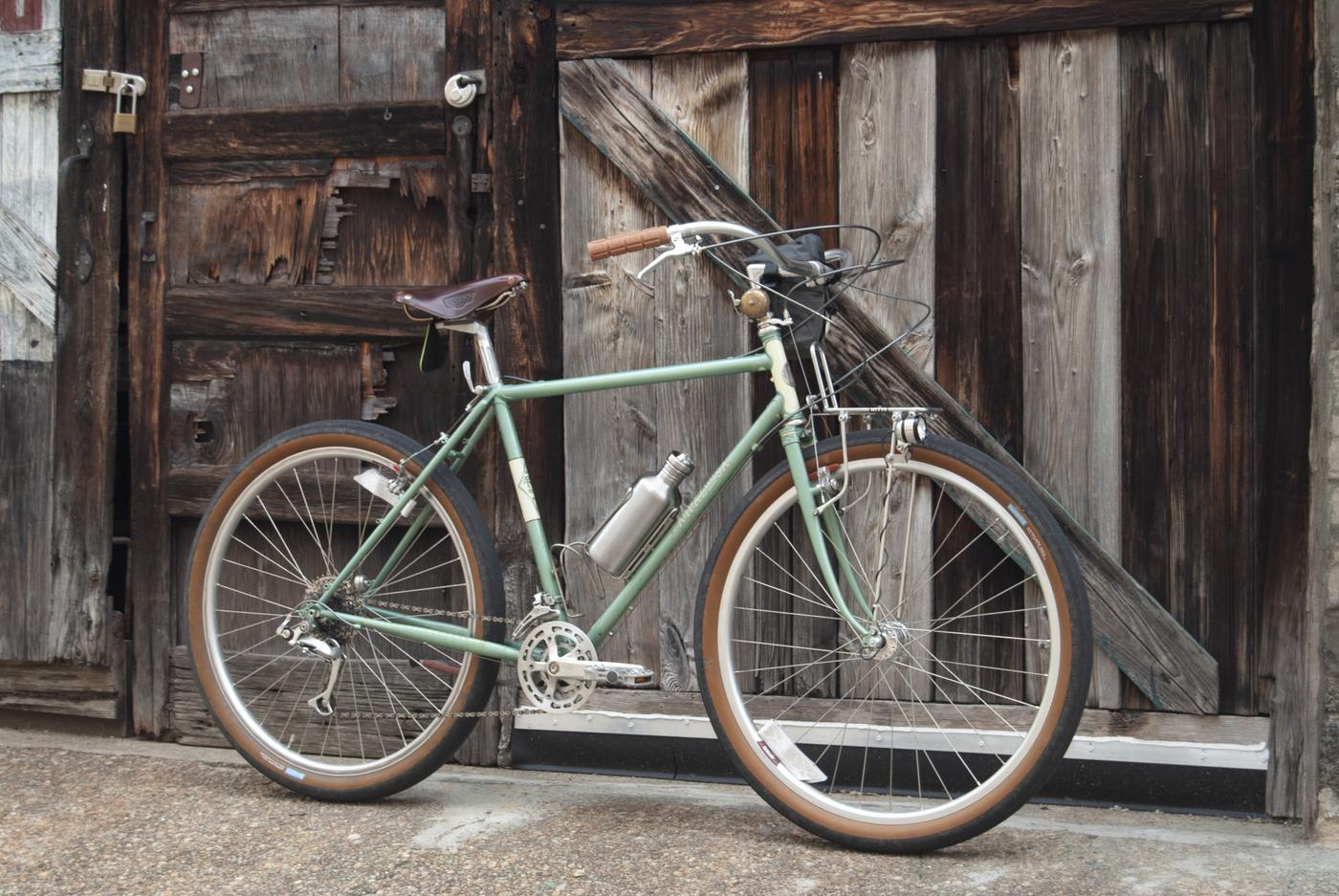 Once I’d digitally signed my HIPPA release I was connected with “Dr. Reach” for a confidential telehealth consultation and came away with a prescription for the Orthopedic bars I’d requested. [Editor’s note: Eric bought these bars from crustbikes.com when they were released just like the 14 other people who managed to get a set.]

The bars are great, comfy so far and, as Crust video editor Tin has noted, they flex like a RockShox.

I got a fresh dynamo wheel, a Velocity Cliff with a SON28 hub, built up by Rich Lesnik at Rivendell. There’s a SON Edeluxe II lamp as well. It’s my first dynamo light and it blew my mind. Beats the beams on my Tacoma.

The real revelation of this build were the old tried, true Suntour Power Thumb shifters. They’re perfect. They look great, they sound great and they work well reverse-mounted. They’re also cheaper on the used market than a lot of the modern fancy thumb shifters out there from Paul and Riv. I love these thumbies. 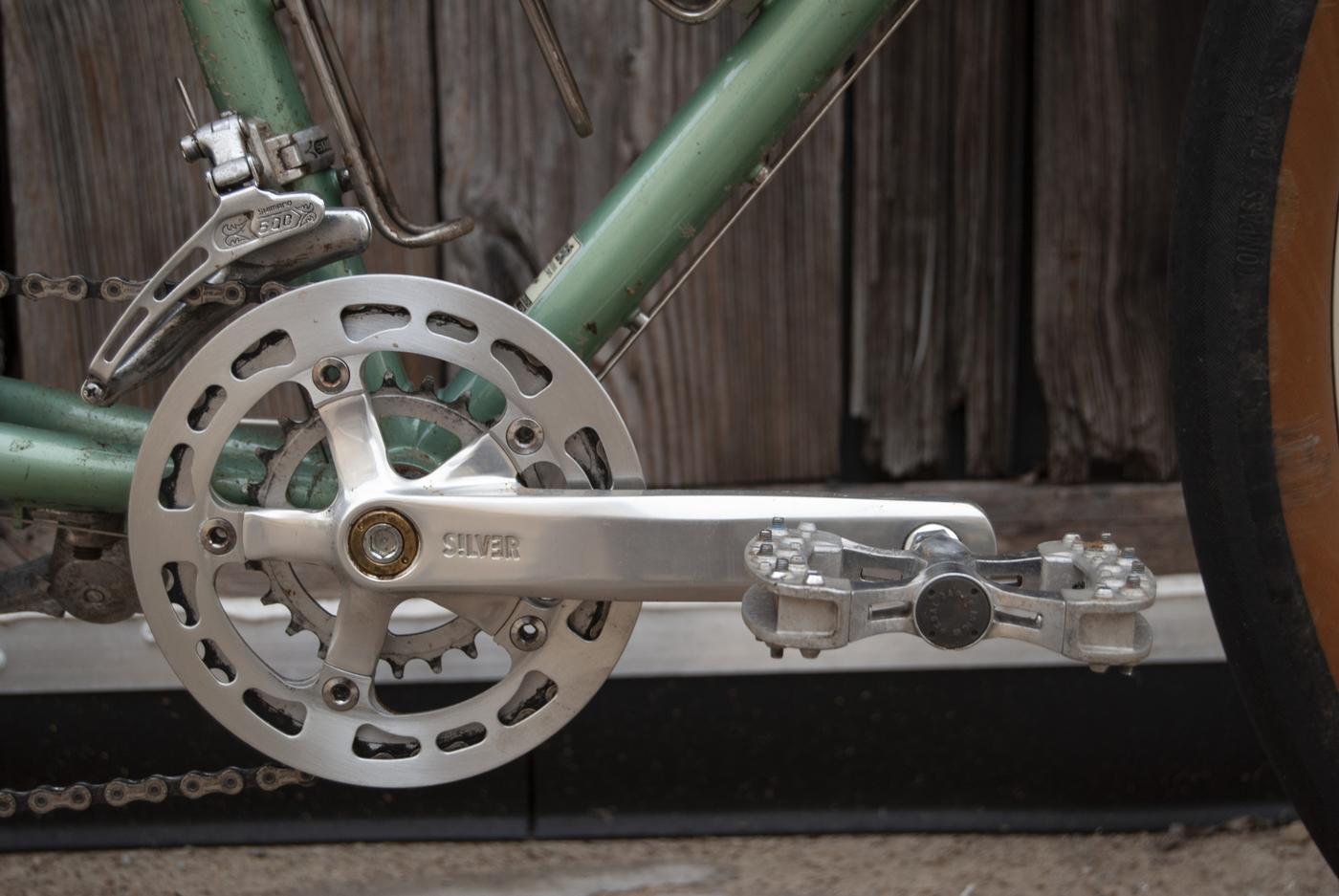 I installed an old Arabesque front derailer, a gift from framebuilder Rob Gassie of Bing Bicycles. It works great and really makes you wonder why the current Shimano front mechs are big, stumpy yet bulky things with massive plastic clamps and confusing cable routing patterns.

Some readers might be familiar with Rivendell’s current project to resurrect Rapid Rise shifting. Shimano offered up “low-normal” rear derailers a few times but they never really caught on. Rivendell has undertaken the impossible feat to manufacture their own opposite-movement derailers.

Rather than defaulting to the smallest gear in back, the Rapid Rise defaults to the largest. If you’re shifting in friction, those phantom shifts give you the gift of an easier gear. The action at your levers is also reversed and now the movement of front and rear, left and right shifters are in synch. Pull cable for a harder gear and push for an easier gear. (Don’t get me started on Suntour’s Compe-V high-normal front mechs…) 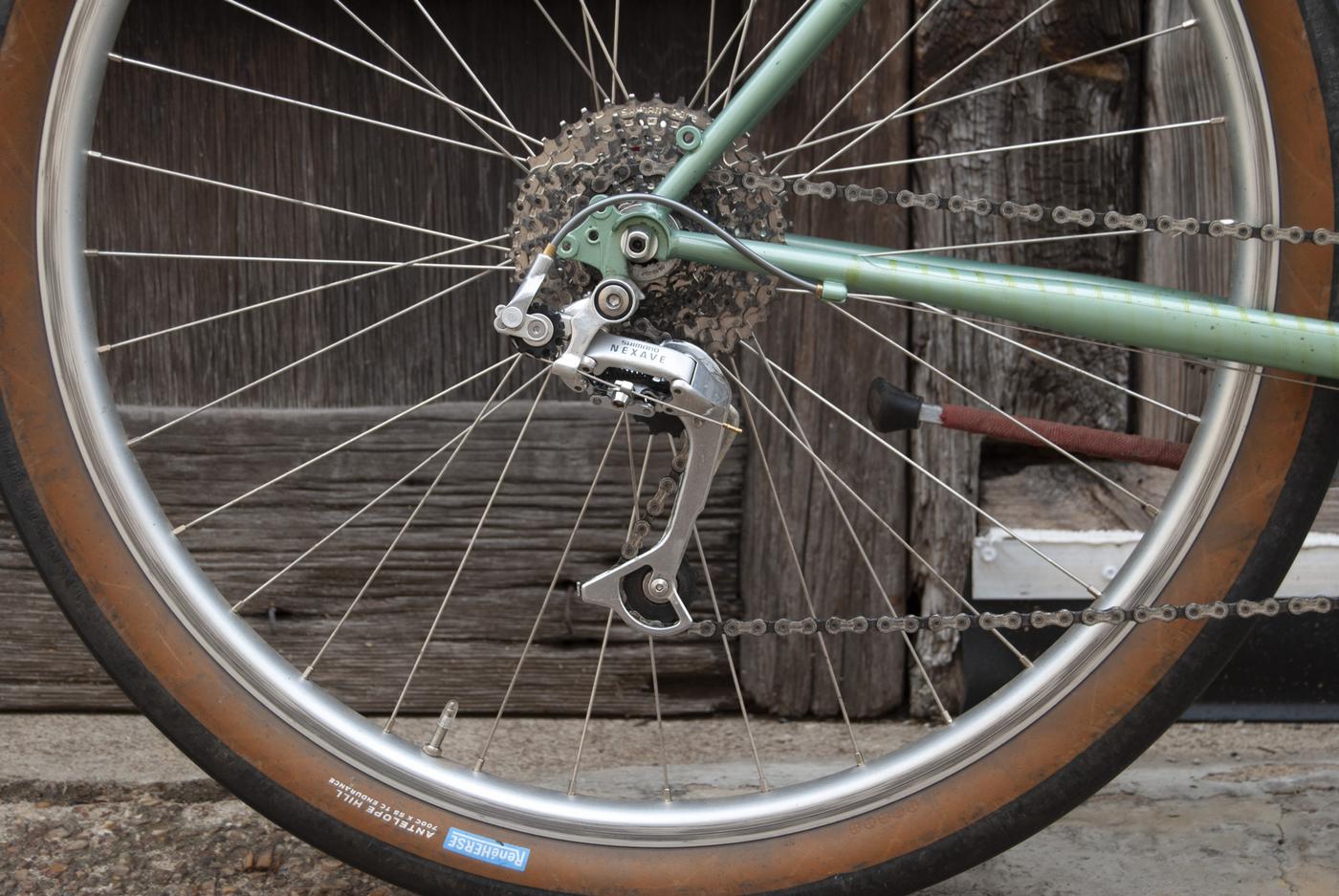 The Rapid Rise I found is a Nexave T4000. It’s big, it’s shiny and it shifts so quietly that sometimes I’m unsure I’ve shifted at all. Sadly, it has not changed my life. While Rivendell’s rapid rise project might never see the light of day (they’re up against strenuous tooling costs) I’ve been inspired to join the renaissance in my own way and it’s been fun to try out for myself.

Now I’m set up with a suite of silver components, handlebars that are so wide I can barely fit my bike through the shed doors and a ride Cadillac dealers could only dream of.

For anyone interested to see even more I’ve made a video documenting the changes and my telehealth session with Dr. Romance. 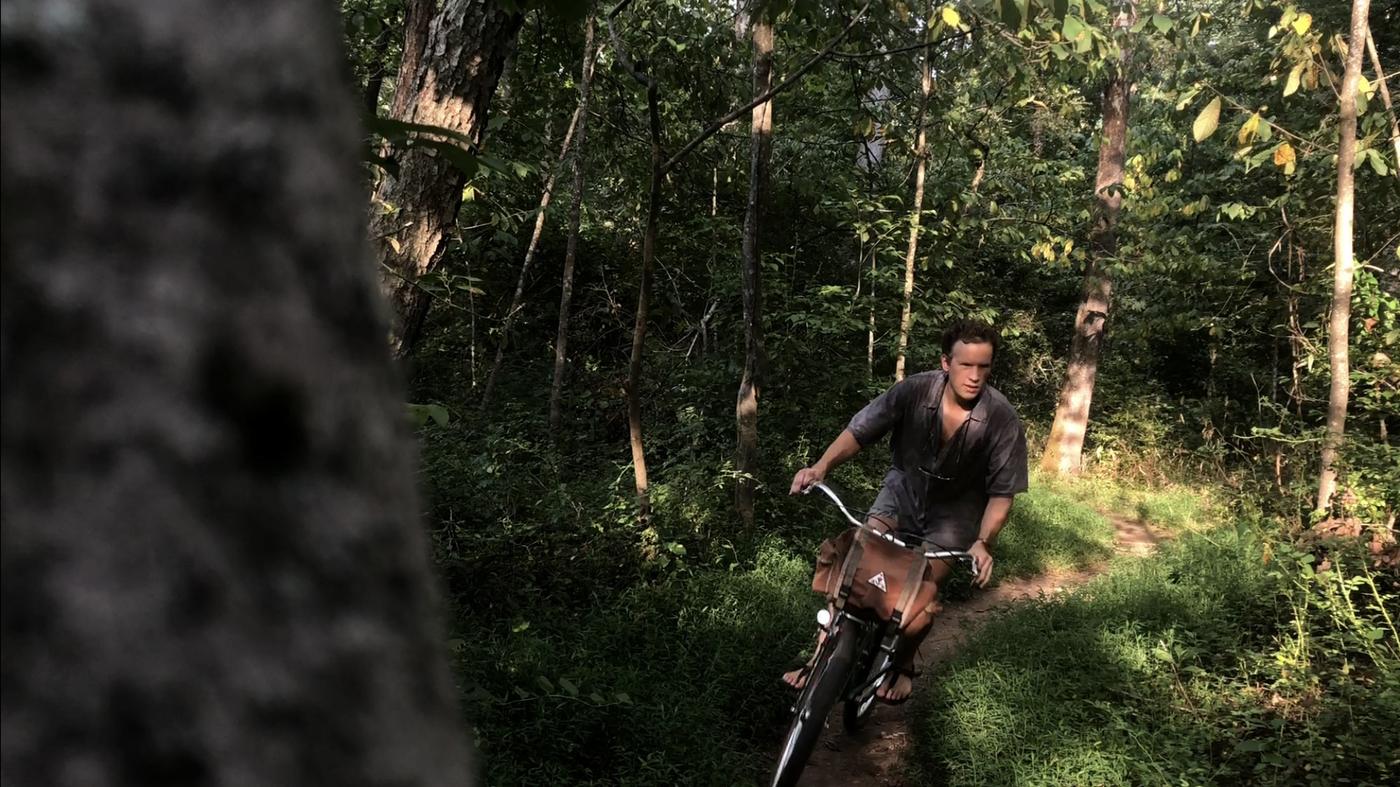 It’s the same bike I’ve known and loved but as bicycle nuts can tell you sometimes the longer you have a frame, the more dialed you make it and the more you know it, the more you love it.

We’d like to thank all of you who submitted Readers Rides builds to be shared here. The response has been incredible; we have so many to share over the next few months. Feel free to submit your bike, listing details, components, and other information. You can also include a portrait of yourself with your bike and Instagram account! Please, shoot landscape-orientation photos, not portrait (vertical.) Thanks!