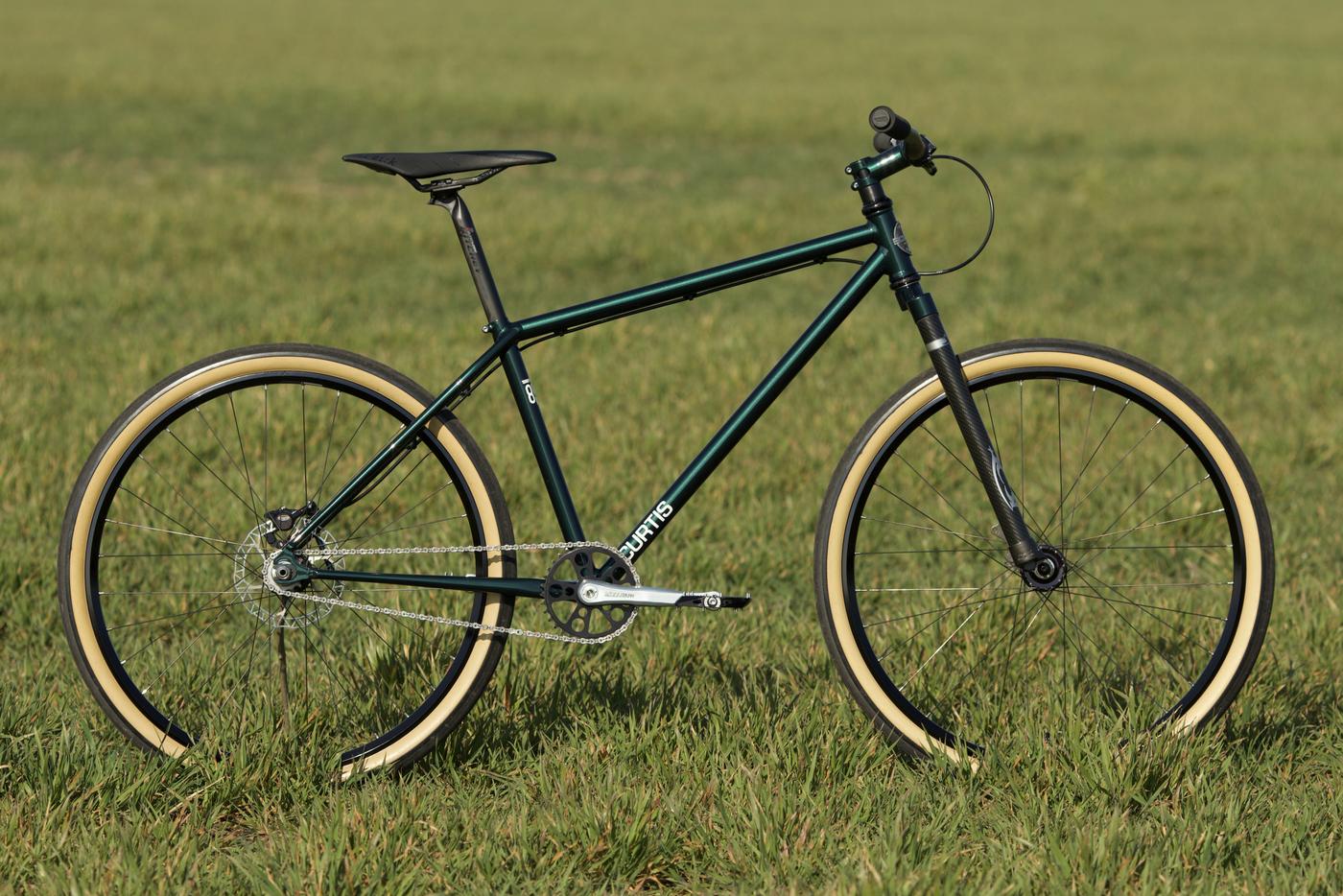 Our International Singlespeed Day post brought out some real gems, including Brad‘s Curtis S1 singlespeed MTB. This one’s a real beaut and Brad supplied a great rundown on the bike’s inception, so read on below for the full report! So I started riding and building dirt jumps in my early teens here on the southeast coast of England. I was a Saturday boy at my local bike shop at the time and loved flowing through a rhythm section during the summer evenings at my local trails spot. Unfortunately, after years of hard work maintaining and developing our local dirt jumping spot things took a turn and our local council flattened the site.

After this period and having nothing local to ride, Street Mountain biking and skatepark was just becoming a proper scene, US rider Aaron Chase was a huge influence on my style. Even then it was early and Urban Mountain biking was very BMX styled. There were a few heavy-hitter UK riders and some real stylish guys and one small frame builder that was making some awesome frames for Dirt jumping, Street, 4X, and Downhill hardtails. Curtis bikes based in southwest England in Somerset, some people may not have heard of them but they started making motorcycle frames and founder Brian Curtis has nearly 50 years of brazing experience. One thing that can help distinguish a Curtis is how Brian layers the rod and builds the braze up into a rippled type finish. Unfortunately back then the price of a handmade frame was well out of reach for a school kid and Saturday boy at a bike shop. After a couple of years I ended up riding BMX in place of my Mountain bike, Eventually, years later I missed the riding around the part that I used to have when we’d ride from spot to spot in the street days. These were often the funniest and it was just nice cruising around with your friends popping wheelies and curbs etc. I started to look at building a bike to really enjoy just cruising around on, something with a very simple setup like a single rear brake (I know strange but if you’re from a Dirt/BMX background it makes sense) also singlespeed and I wanted it to be built using quite a few parts made in the UK. Although small we still have some master craftsmen working away in small workshops producing some top quality parts. I visited Bespoked Bristol the UK handmade bike show in the very early years of the show and was re-acquainted with Curtis bikes. Gary Woodhouse ( The frontman at Curtis) and brian were still making frames in their small Somerset workshop. The bikes they had on display were just as I remembered stunning and well made, although now being much older I could save and buy one. It wasn’t long probably a few months after the show and I was in contact with Gary and had arranged to drive down to Somerset to discuss the build. Gary was great, at first I was a little worried as the build wasn’t what they usually do (Essentially a cross country single speed with slicks) but Gary was well up for it. We ended up deciding on a really classic style frame with straight seatstays, slim Reynolds 853, and 725 Tubing with a very minimal look. I wanted small compact horizontal dropouts to keep it simple and this was kind of a nod to my BMX background, we named it the ‘Supermoto’. The paint is in British Racing Green, which as a kid I loved seeing Mini coopers, Caterham 7’s, and Morgans in this colour. It was an English made frame built using English tubing and I knew this was the colour I wanted. Cole Coatings in London later did the paint, colour coding the forks crown, stem, and top cap. It took a bit of time to source some parts for the bike over the years leading up to building it. The forks were Key, I always wanted some Pace RC31 rigid carbon forks (Soon all designs to be sold to DT Swiss). These were available in two main types, RC31 and RC31 C-Types but were no longer in production which made things difficult. C-Type was for competition, these were the model I wanted as they were a tiny bit lighter. Although they still had the same Aluminium Crown, Carbon legs, and Magnesium dropouts they had titanium inserts that the carbon legs were bonded to instead of steel. I eventually was lucky enough to source a new old stock pair online. I’ve also been a fan of Hope for many years so knew what brake I needed, an X2 married to the simple and lightweight Race lever. Other UK parts worth noting are the Middleburn crank arms, these were a very early RS8 and the arms are slightly slimmer than the RS7’s saving about 30 Grams. Although these were eventually shelved as they later found they could reduce more weight from the spiders. I modified a White Industries chainring to fit the Middleburn interface too. The cranks are mated to a Royce titanium bottom bracket. The wheels are Chris king ISO hubs (Single speed rear), with Mavic rims and Sapin spokes. I wanted hubs that were an investment and CK have always had this attitude. I can service them easily myself and they will last a long time. These were built by my local wheel building legend Harry Rowland. It’s a strange bike I can’t deny, and many people won’t like it but that’s the joy of bespoke in my opinion. It was built for me and I’ve made it to what I wanted. This was built before the Gravel scene had hit the UK really. So it was my early take on being able to ride a bit of road with some gravel tracks and paths without fear of it being too harsh. It works great in my opinion.