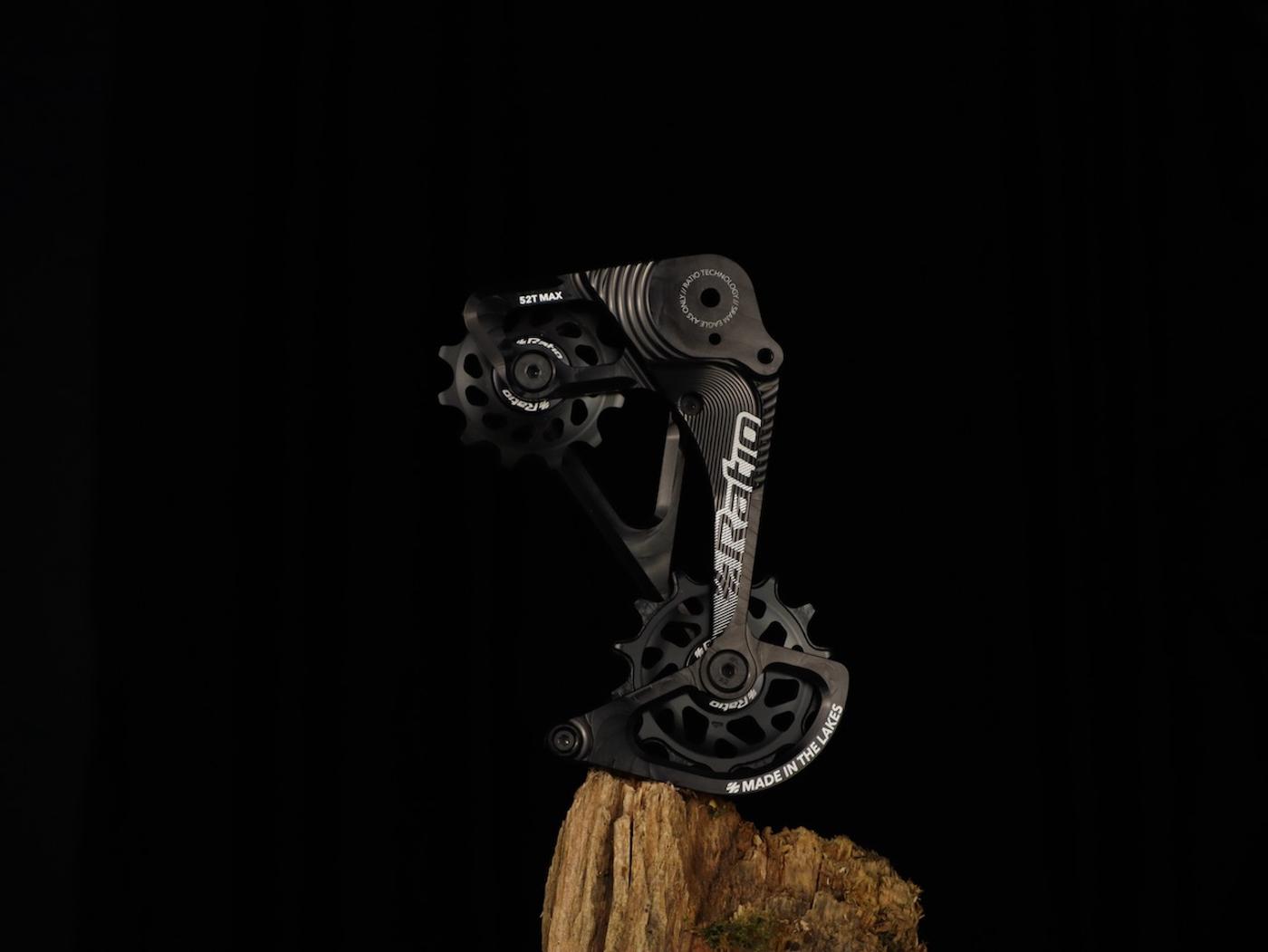 Ratio Technology, known for its shifter upgrade kits and UK-made components, today launched a derailleur cage for Eagle AXS derailleurs. Machined from 7075 aluminum, the new cage shares many features with its mechanical-shifting cousin but has updated geometry for compatibility with SRAM’s electronic MTB derailleurs.

The new cage features 14t and 12t jockeys running on stainless Enduro bearings and held together with full stainless hardware. The standout feature of the cage is its weight: At 79g out of the box, a Ratio cage saves 67g over GX AXS and 5g over X01 AXS. The cage aside, SRAM’s electronic derailleurs are all virtually identical in their construction. The result is that a GX AXS derailleur fitted with Ratio’s cage weighs the same – but costs less – than SRAM’s X01 model.

Additionally, the new cage fits on all of SRAM’s Eagle AXS derailleurs, making it a replacement part that they don’t offer. Bending or breaking a cage should not write off a derailleur that could have cost you over £550/$750/830€, and now it won’t. 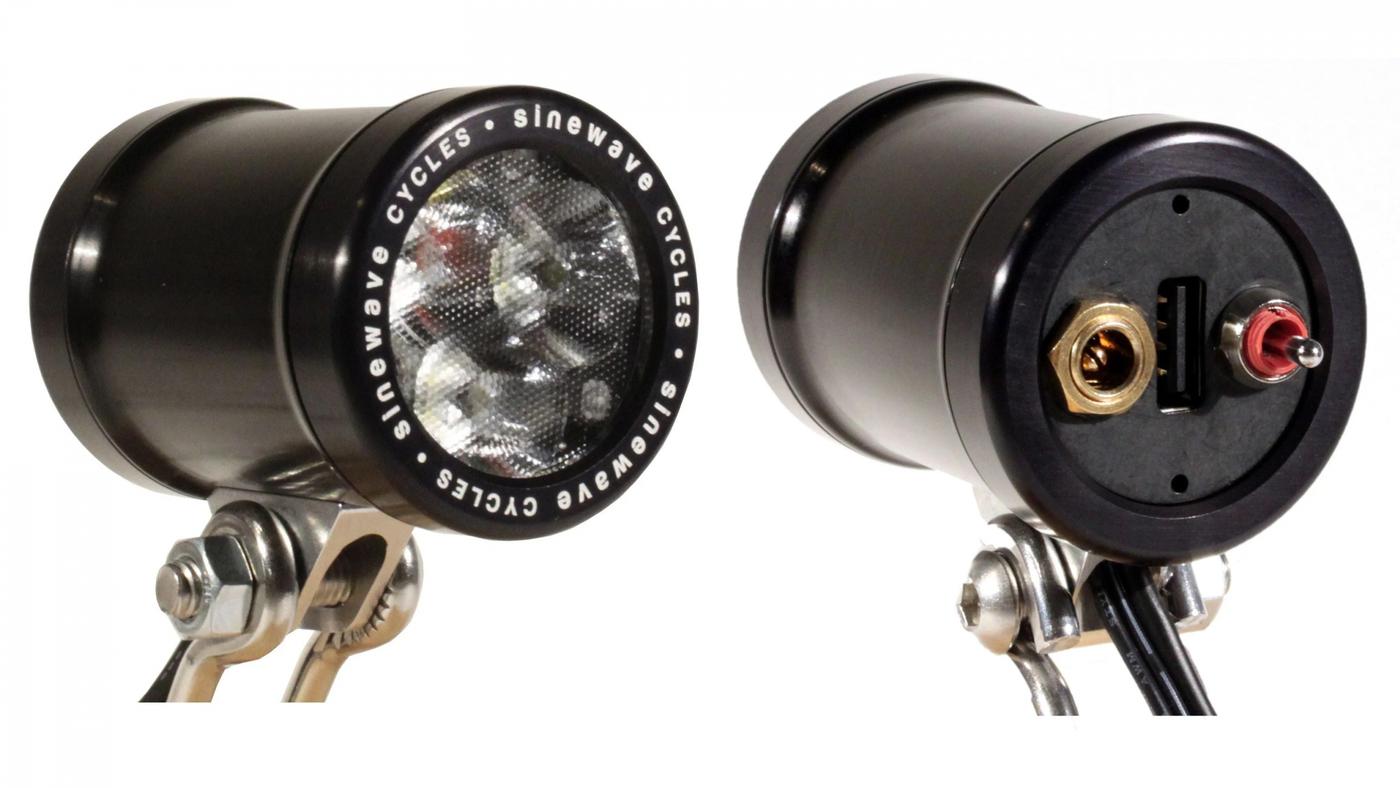 We’ve been using the Sinewave Beacon since its initial launch and can’t recommend it enough. While there were a few quirks, overall, we’ve been pleased with its performance. Yet, for the past year or so, Bailey from Sincere Cycles has been riding with the Beacon 2.0 and it’s a huge improvement. More on that later. The most notable change is the flicker-free light down to 3-4 MPH, which means your light won’t be strobing as you’re climbing that singletrack anymore. It also features a symmetrical beam pattern now and the dynamo power is optimized at low-to-medium speeds, reaching 100 lumens at 5 MPH, 375 lumens at 8 MPH, 600 lumens at 10 MPH, and 750 lumens at 13 MPH. What we’re saying is the Beacon 2.0 is dialed in for singletrack riding more now than ever.

Sinewave is taking $50 deposits now, which goes towards the $350 retail price when they ship in Spring/Summer 2023.

We got served this on our Instagram explore page this weekend. Ain’t it nice when you get shown things you actually like?

Here’s something for the garage tinkerers, the Rivendell savants, the vintage basket bike builders. Thumbster is a new thumb shifter, designed in Japan and manufactured in Taiwan. The Thumbster embraces the 1x trend of basket bikes, or everyday bikes as Thumbster calls them, and only offers a rear mech shifter, which is kind of a bummer in our opinion, but plenty of people convert their bikes to 1x as its often used as a city bike. At any rate, we love seeing this kind of product design, so roll on over to the Thumbster Kickstarter to see more.

Is This The Perfect Bikepacking Bike?

There are many things that go into making a bike ideal for bikepacking and the Kona Rove DL checks a lot of those boxes! After riding it all summer, Karl from the Gravel and Loam Society takes us through his Kona Rove DL and tell us what changes he’s made and what makes it so great.

Mulberry Gap in north Georgia is a mountain biker’s dream retreat and gateway to some incredible riding. Pedal along with local riders and get the lay of the land in this episode of our For the Love of Dirt film series.

3T Exploro Racemax Made in Italy – Impossible Builds by Velodrom

Velodrom Builds recently featured the new 3T Exploro Racemax, the newest model to leave the Exploro line, and perhaps the most tech of all. See more at 3T.

The Mid South got its Instagram account hacked and had to start from scratch last week. Boo. You can help them out by signing up for their new account though! Yay!