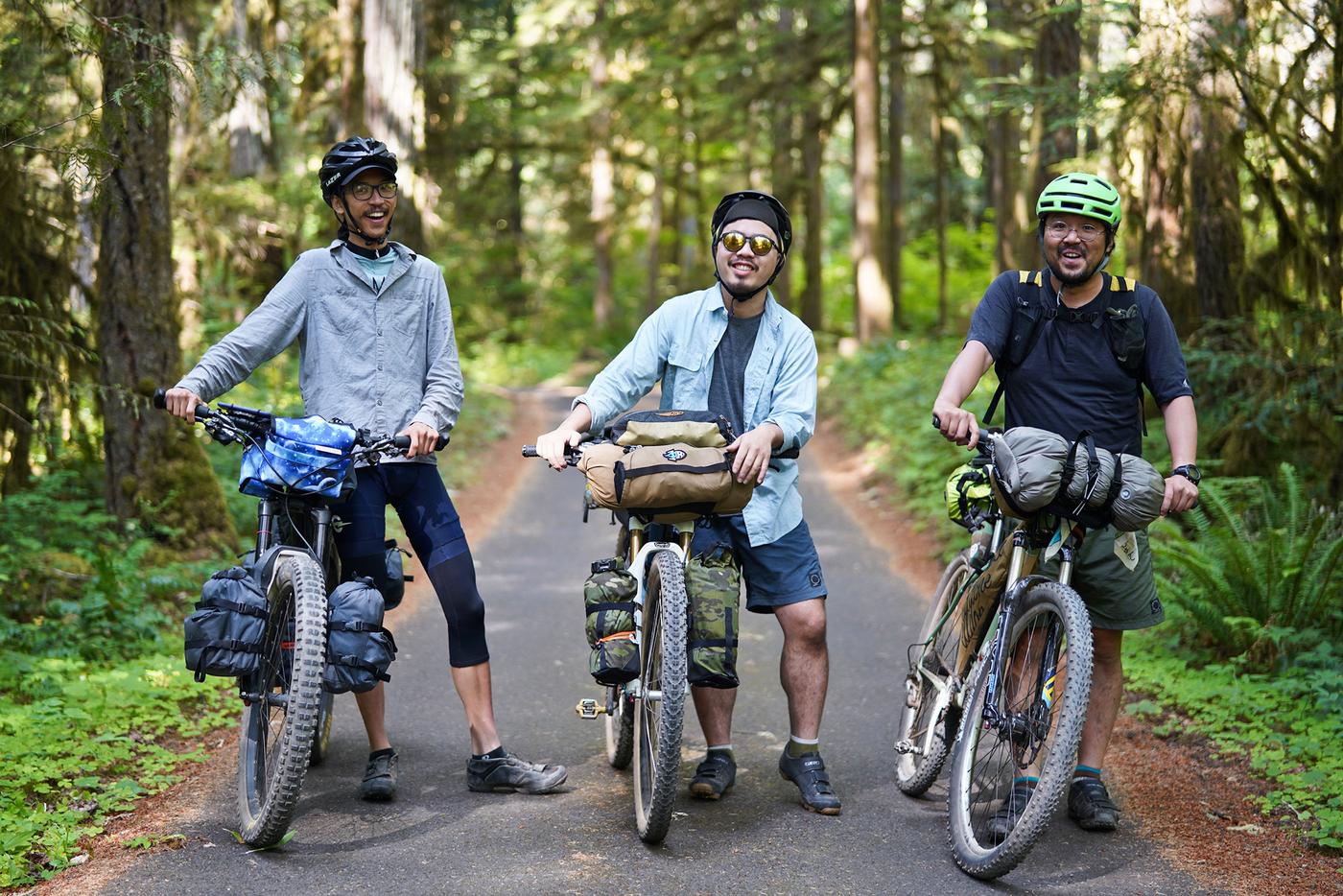 Fast forward to the trip start, I’m listening to a ten-hour podcast called ‘Japanese for Beginners’ on my drive from San Francisco to Portland. Lesson one: you can’t learn very much Japanese in ten hours. It’s really hard. Turns out, Keita and Innochi actually spoke some English and all the words I had just learned, they already knew. So Rie drove the four of us to Oakridge and we all rode Dead Mountain, an awesome mountain bike trail that I highly recommend. It’s perfectly groomed, burmed, and super rad (or ‘cho yabai’, as they would say). After a good night’s rest, I pedaled off with two new friends, fully loaded up.

The first day turned out to be the hardest part of the whole trip, leaving Keita and Innochi wondering what they had got themselves into. We went from Oakridge, up over Bunchgrass ridge and almost all the way to Fuji Mountain to find a water source. 14-hour day and a 5000’ climb with part of it pushing up some kind of world cup downhill run, WHY??? Anyways, everything turned out fine and I was extremely impressed with the positivity from my new friends. It kept my spirits up and we learned a lot about our own expectations. I also learned that there are some serious misconceptions about the OTT, so I think it would help to specify some facts and tips:

-This route is hard. Due to the language barrier, my Japanese comrades thought the trails were going to be smooth, like the bike-specific trails of Oakridge and Bend. It’s easy to see why someone would think this, looking only at the scenic advertisements on Instagram, but don’t expect to rack up tons of miles on every section because you’ll never know what to expect. Just take on each day as it comes.

-You will have to carry your bike.Keita and Innochi were both experienced ultralight backpackers, so they brought a lot less stuff than I did. I’m usually over-prepared, which meant my bike weighed up to 90lbs at some points. I weigh 120lbs, so sometimes I physically wasn’t able to carry my bike over a large downed tree. That’s when good friends really come in handy. Sometimes there are sections of huge rocks making it too hard to push your bike over, or its just so steep and loose you can’t get enough traction to push. If you need to, you can unload your bike and hike your bags over first.

-Hiking your bike takes a long time.When the guide says something like 90% rideable, it may sound easy, but they’re talking miles. That’s 60 miles of hiking over 600 miles. If you have to carry your bike instead of push, you can slow down to a crawl of one mile per hour. If you’re measuring in terms of time instead of distance, that ‘90% rideable’ statistic changes to something drastically lower.

-Conditions may vary.The water sources, trails, and statistics in the guide are sometimes just approximations. We hiked to an off route spring on the first day that ended up being dry. It was a disappointment but I had enough water to get us to the next source. Be prepared to skip a water source, or even two if it looks dicey. Water wasn’t a big issue for most of the trip, but sometimes a trail on the route was completely overgrown, damaged, or nonexistent. After some serious burns in Oregon this year, I expect this to be a much bigger issue. You should be able to adapt and create a detour, if needed.

-Treat yourself!Each time I embark on a trip like this, I really try to focus on my personal wellbeing, both mentally and physically. I know some people may not see it this way, but a bike tour for me is a meditation. I wouldn’t overdo it just for glory or bragging rights. I try to do what makes my mind and body feel good in the end. I try and eat well and take luxuries when the opportunity arises. I incorporate fresh fruits and veggies after a grocery resupply, since they usually last about a day or two with careful packing. One thing I had never done before was cooking a quick meal for lunch during the ride. My Japanese friends turned me on to this. It’s a time suck, but really gets the spirits up and motivates you to put in a lot more work after. One thing I really like about bike touring is how much food you get to eat and Chef Keita made some really good stuff. There are also many summer lake resorts on the route and you can poach some of their services like showers, beaches, lounges, bars, or WiFi. Our most luxurious splurge was a couple days at Breitenbush Hot Springs Retreat, which I also highly recommend.

In the end, I had to split up with Keita and Innochi after Breitenbush because they took a road detour back to Portland. I finished the OTT by myself, but luckily, the Hood tier turned out to be easier. Anyways, I know many of you are here to check out the bikes and gear, so I’ll go into detail about that. 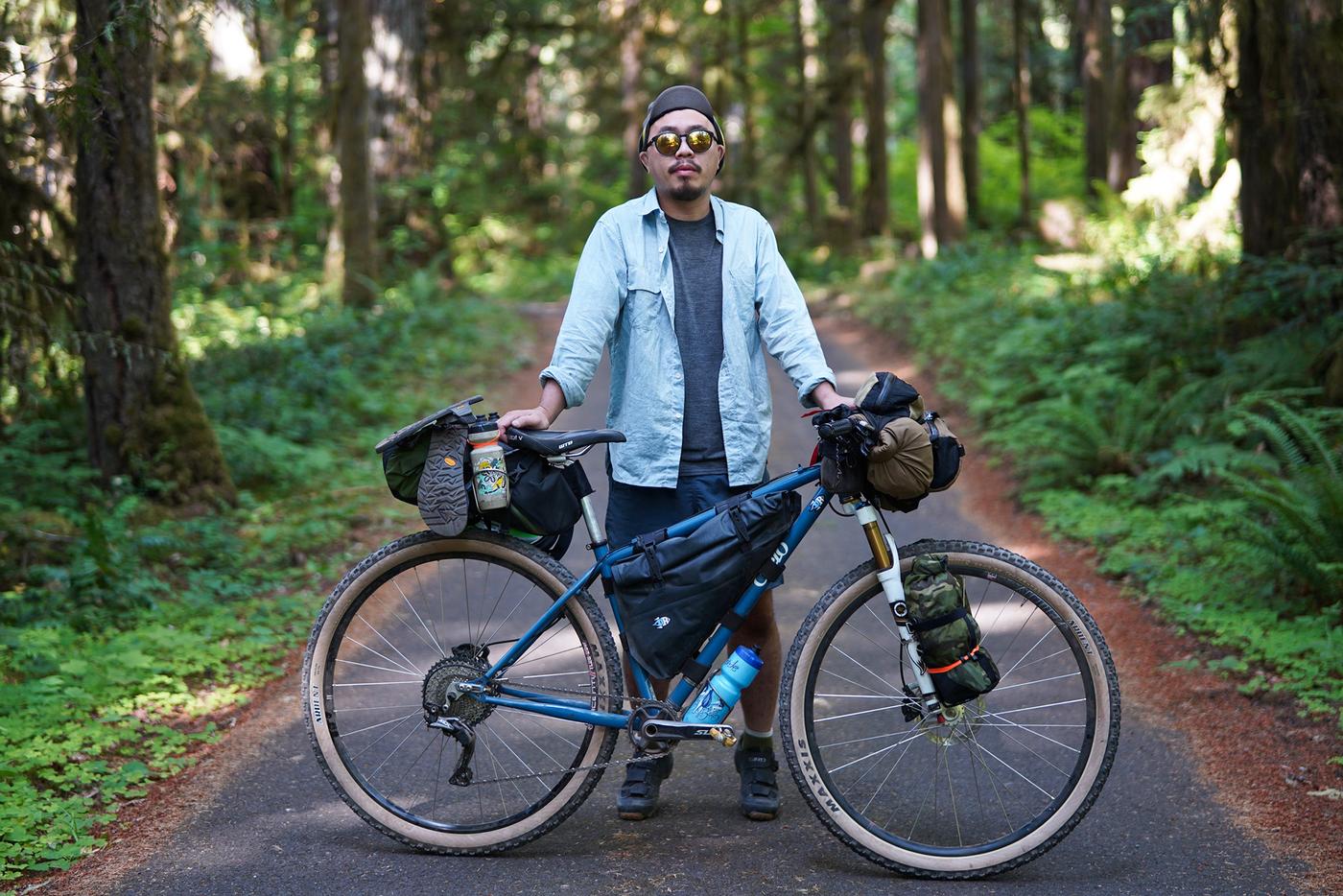 Keita and Innochi were both riding hardtail 29ers with 100mm of travel and 2.2” tires. I had a hardtail with 160mm of travel, 27.5 x 2.8” tires and a dropper seatpost. My bike was definitely much more capable on technical descents and climbs. The big tires just gets over stuff easier and I was able to run super low pressure (~12 psi) to float over one extended section with deep sand. It made the difference between riding and hiking. The dropper seatpost also makes a big difference, but you won’t be able to run a big seatpost mounted bag. 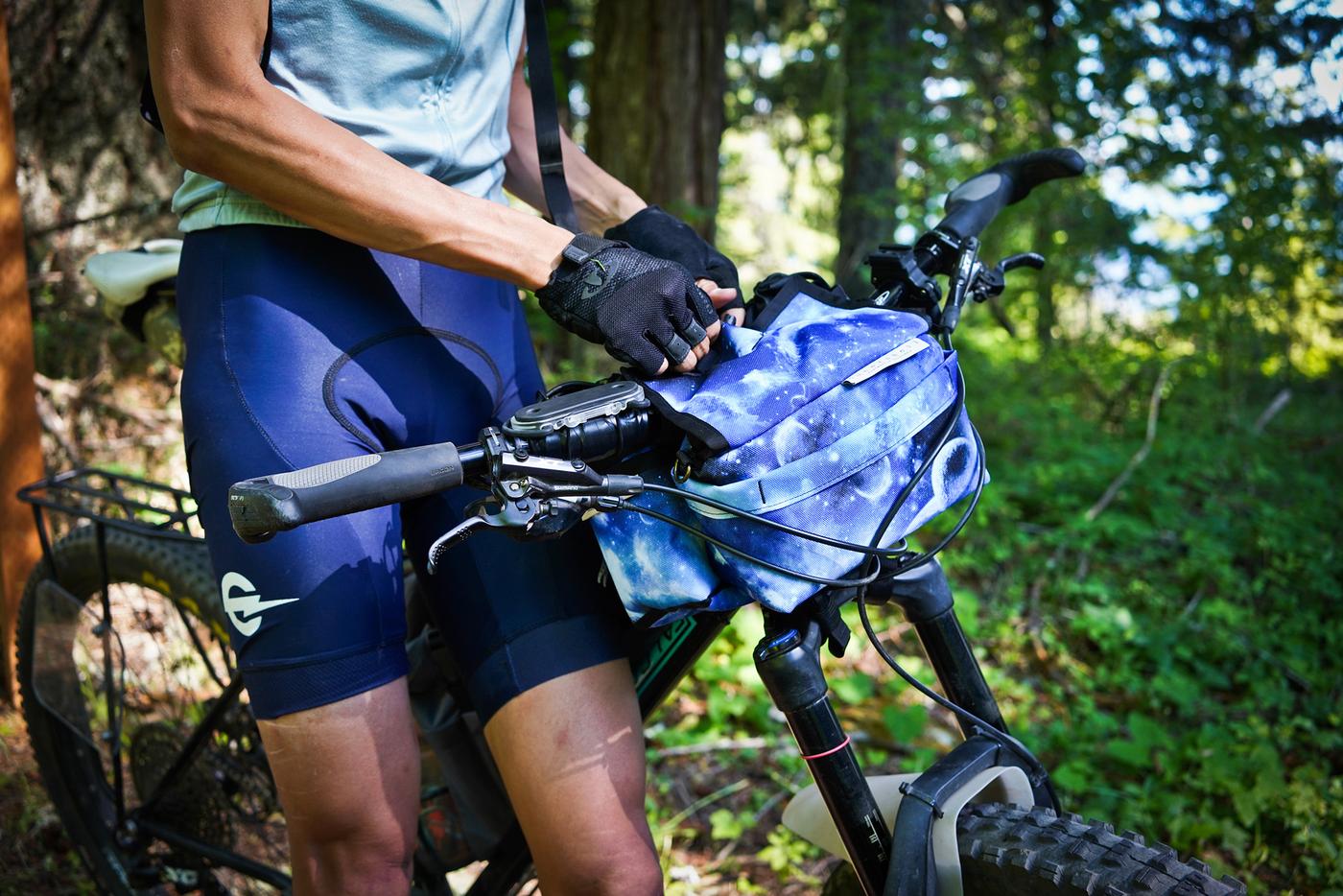 That’s why I had a custom rear rack made by Falconer Cycles and was running prototype Outer Shell Pico Panniers front and rear. This kept my weight down low near the hubs. On my handlebars, I had the Drawcord Handlebar Bag and two Stem Caddys, all for quick access items. I don’t like carrying anything on my back because I really enjoy the feeling of wind through my shirt. This meant my bike was very heavy and almost impossible to carry sometimes. Keita had a fanny pack and Innochi had one of his Welldone backpacks, making their bikes much lighter than mine. In fact, they carried way less stuff altogether. Keita and Innochi also had much more minimal sleep setups. Both of them had single pole, single wall shelters from Six Moon Designs, some crazy looking sleeping pad with holes all over it called the Klymit Inertia X Frame, and a thin sleeping bag from OMM. Innochi had an OMM insulation mat that doubled as back padding for his backpack. It all packed down insanely small and was ultralight. I thought I had a pretty minimal setup until I saw theirs, but mine was much more luxurious in comparison. I slept in a Hennessey Hammock with a Big Agnes AXL Air sleeping pad, an Enlightened Equipment down quilt, and a Sea to Summit Aeros Pillow. I like this combination because I’m able to set it up on the ground like a bivy if I need to. 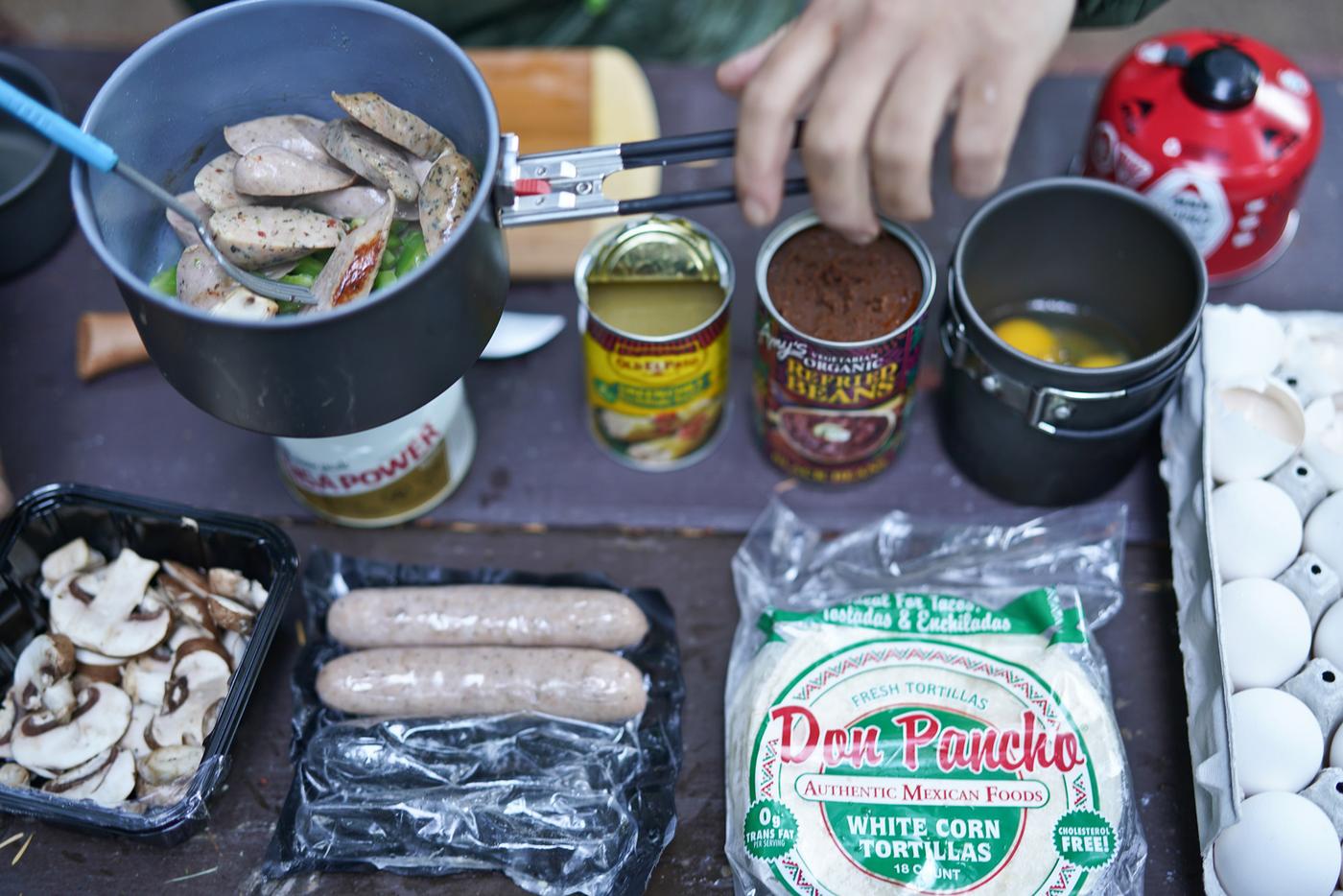 We used Sawyer squeeze and gravity filters, which worked great the whole trip. In addition to a 24 oz. water bottle, I carry a MSR Dromlite 6L bladder because it folds down to the size of its cap and I rarely fill it up all the way so it can conform into all the nooks of my framebag. Keita and Innochi could carry a maximum of about 4L of water each and that proved to be sufficient for most days. To cook, they used mostly canister stoves. I had an alcohol stove with an adjustable flame and a system called theTrail Designs Caldera Cone. It fits my 1.5L MSR pot with a ceramic non-stick surface that’s perfect for those fancy meals I was talking about. I also carry a Snow Peak titanium bowl and an REI tumbler. We relied solely on our phones for navigation, using RideWithGPS and Gaia. With three phones, I didn’t think it was necessary to bring any other sort of navigation. We also had extra batteries, with mine being a huge power bank that can charge my phone six times. Innochi had a dynamo charger but it was only useful a couple of times because we were usually going too slow to get any juice out of it.

All in all, I would say there’s never an exact right way to pack. After countless trips, I still find some things I shouldn’t have brought or some things I forgot. Sometimes, I find myself nervously repacking right before a trip starts, but I think it doesn’t really matter most of time. I like to be prepared, but as long as you’re adaptable, it’s usually going to be a great. I would say the most important thing is don’t forget to TREAT YO’ SELF!