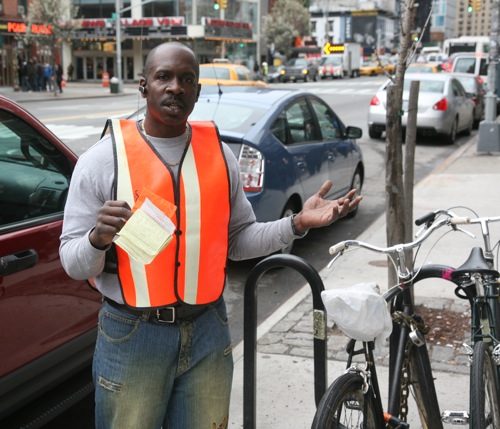 Rodney Seymour, after being doored and ticketed, and before having his bike stolen.

This sucks and it goes to show why NYC will never be a city for cyclists. Go read the full story at Streetsblog, then come back here for a little story.

You done reading? Sucks doesn’t it?

Ok, so I saw the story about Rodney Seymour earlier today and it really bummed me out. While I was out riding my road bike just now adjusting the fit a bit, I had a cop pull me over for not stopping completely at a stop sign. Luckily, I was on my road bike with brakes. I also had a front and back light so there wasn’t much he could ticket me for. He tried to say something about a bell, which I backpedaled out of since I said it was my race bike and I was just trying to get the fit right.

He was being cool about it for the most part (I live around the corner from a precinct so this happens a lot actually), then he tried to bust me for not having reflectors (is this a new ticket spree?). At this point, I brought out something I carry with me at all times; a print out of the NYC cycling laws. We talked (respectfully, as you should) and eventually I got off without a summons. Now, if I would have been on my track bike, I would have had no ground to argue but luckily, on my road bike, I had some wiggle room.

So the reason I’m telling you this is to emphasize the importance of knowing your rights and laws as a cyclist in NYC. I’ve conveniently made these laws into a 2-page PDF, which you can print out at 50% and stuff into your bag in case this happens to you. Just download that and put it somewhere safe. If you ever get pulled over and the cop happens to be a respectful human being, show him the laws in a polite way and you might get off too.