I love visiting the local bike businesses once and a while to see what’s going on behind their doors. Last month I swung by Brooklyn Machine Works ( @BrooklynMachine ) to shoot some photos and see how the guys were doing. It’s been a busy few years for them with the popularity of the Gangsta track and the company has some new things up their sleeves for 2010.

Taking vignettes of spaces and machinery is quickly becoming a new passion of mine and 16 Powers Street is filled with them. Check out some photos and even some sneak peeks at future works below! 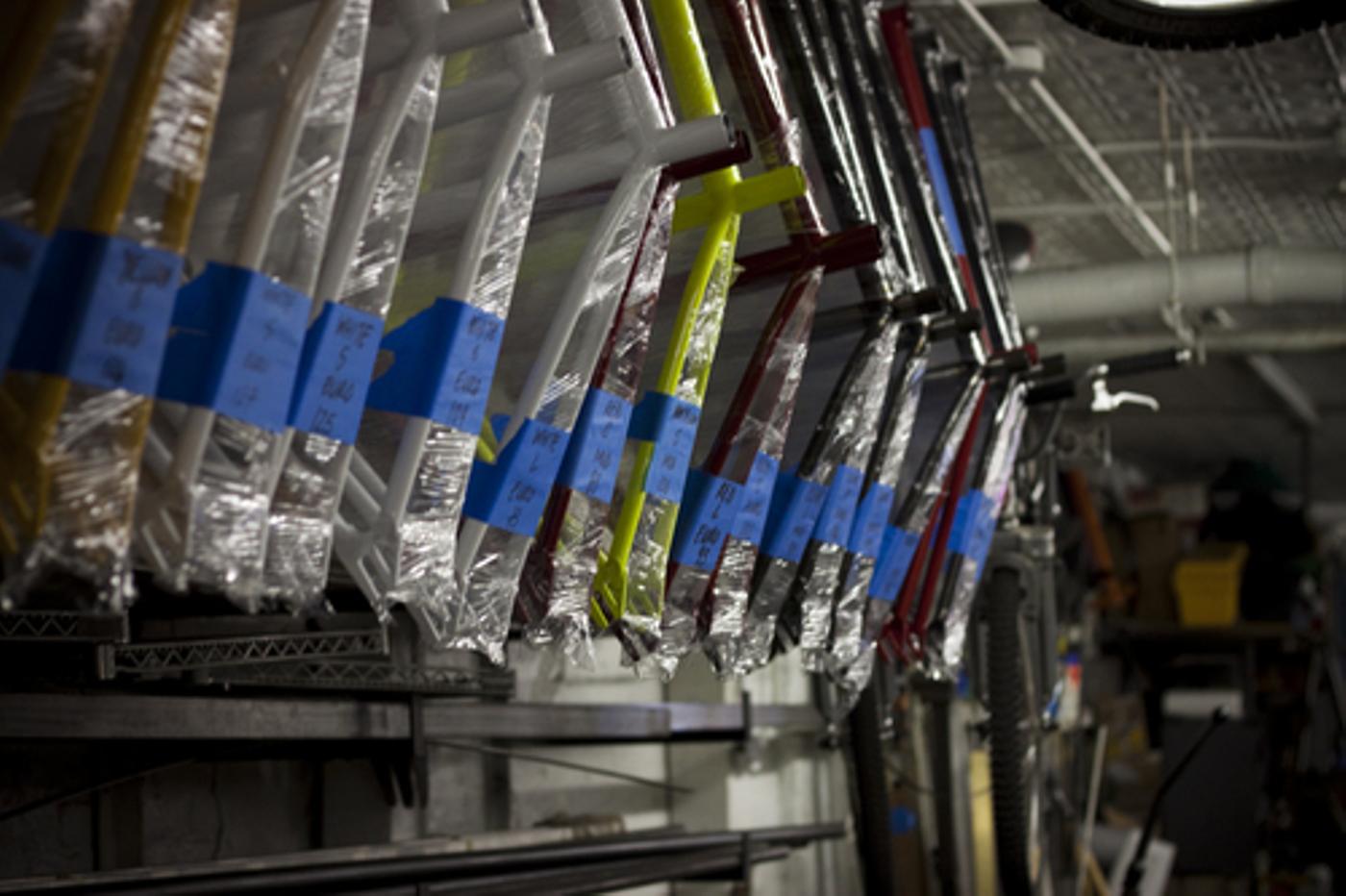 Two years ago, the Gangsta track was “the” fixed freestyle frame to have and to be honest, it was well-deserved. What other frame was handmade in the US (and Brooklyn for that matter) by guys who started out making BMX, DH and DJ bikes? Now the Gangstas are made in a few choice colors shown here. 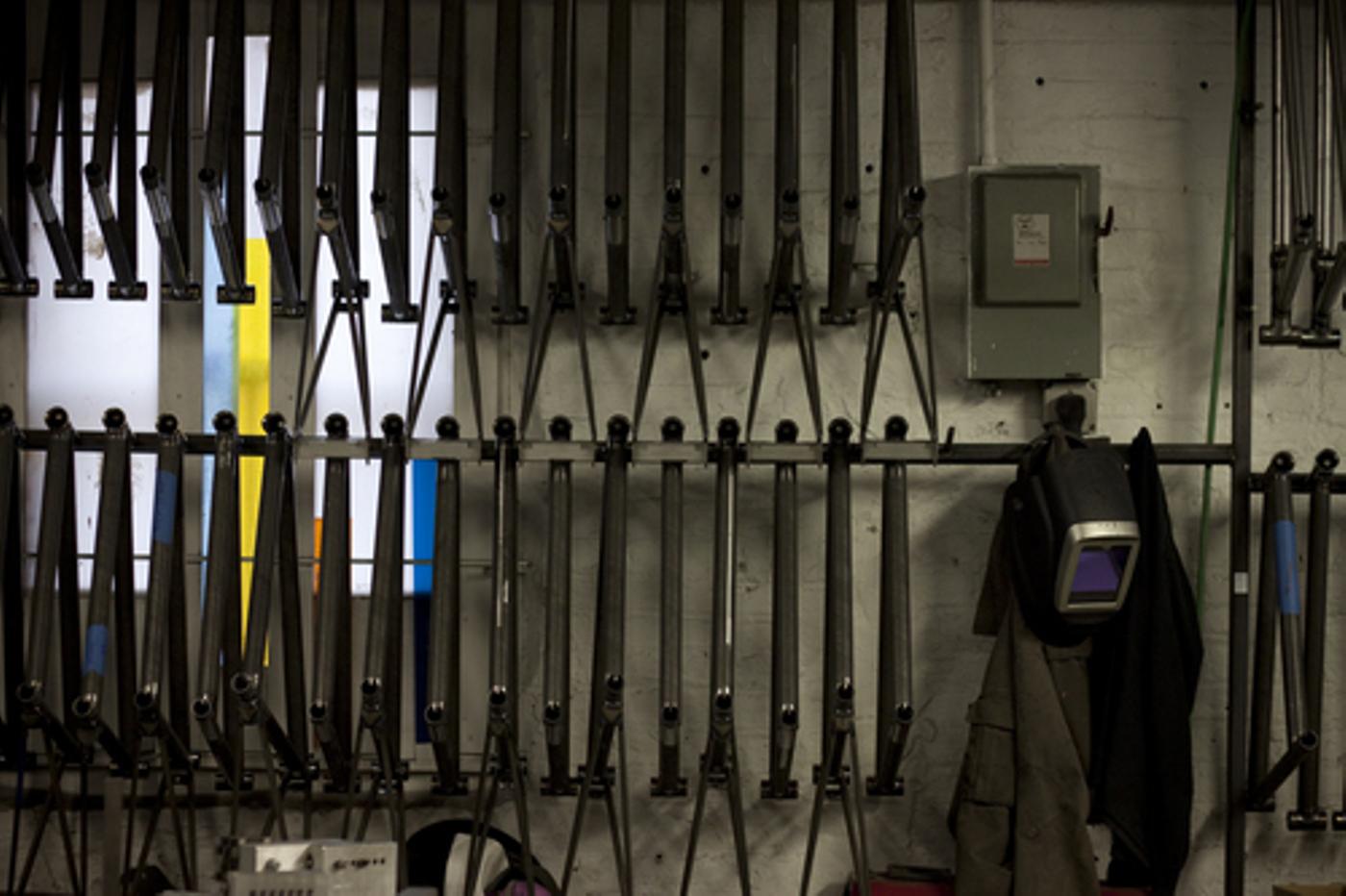 Production was in full swing when I was there. Here’s a ton of front and rear triangles freshly welded. 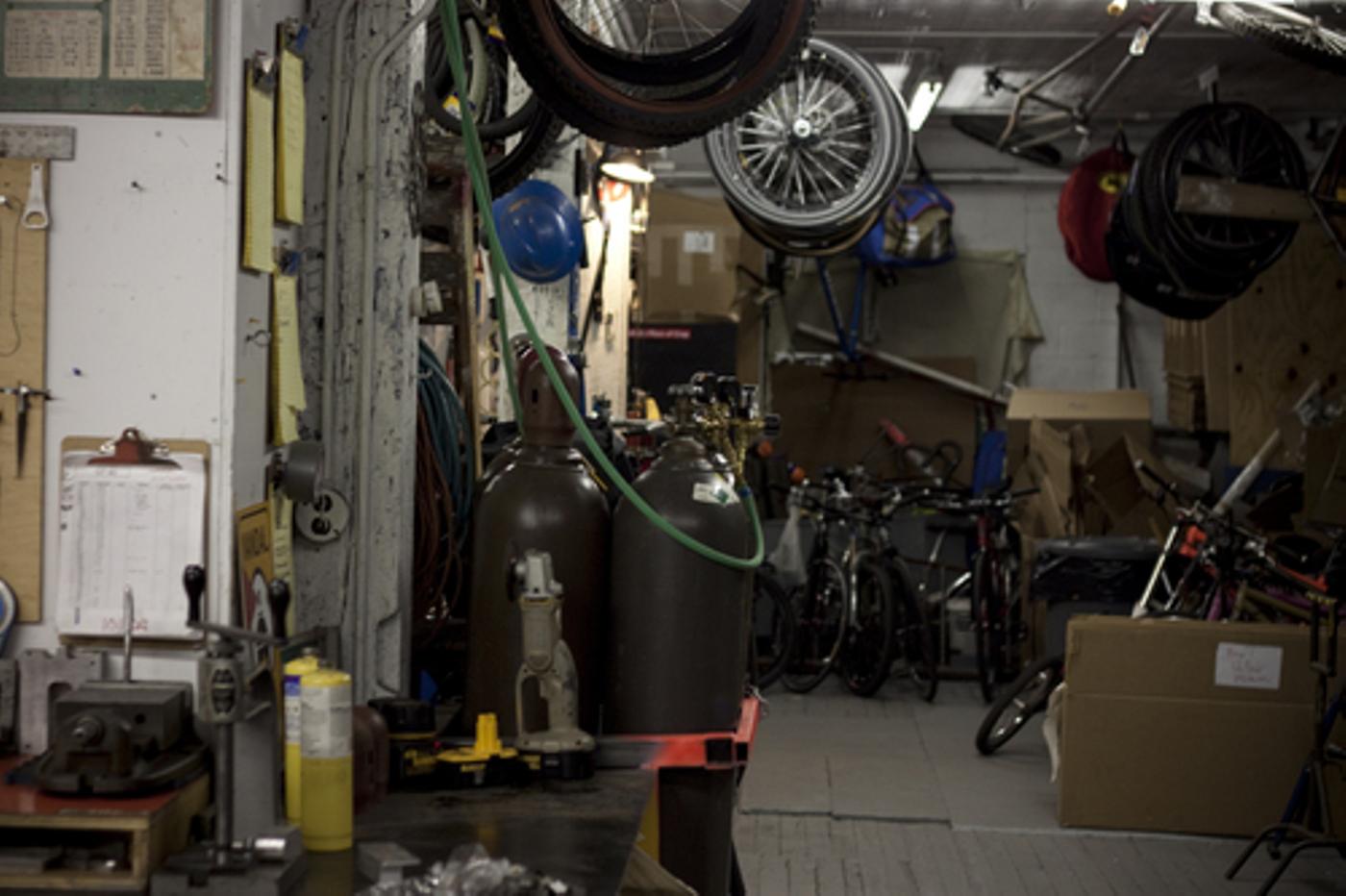 The space at 16 Powers Street is really packed. It’s hard to describe even through photos but there are tons of things hanging from the rafters and stacked along the walls. Here’s the command center. This is where your orders are processed, business decisions are made, beer is consumed and shit talking is had. Hanging above the desk is BMW #01, a constant reminder of where it all started. 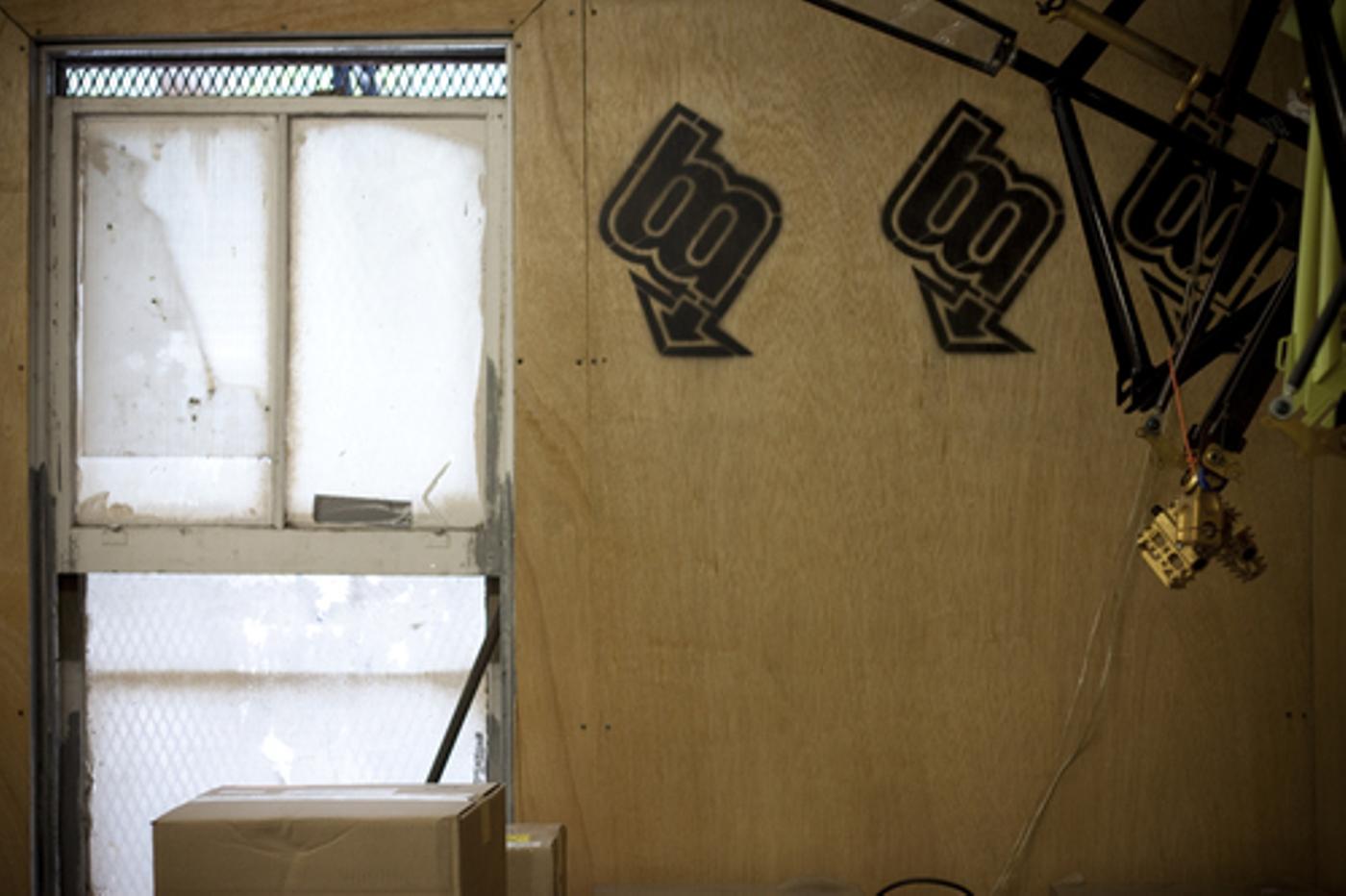 Some other areas of the shop with BMW insignia. 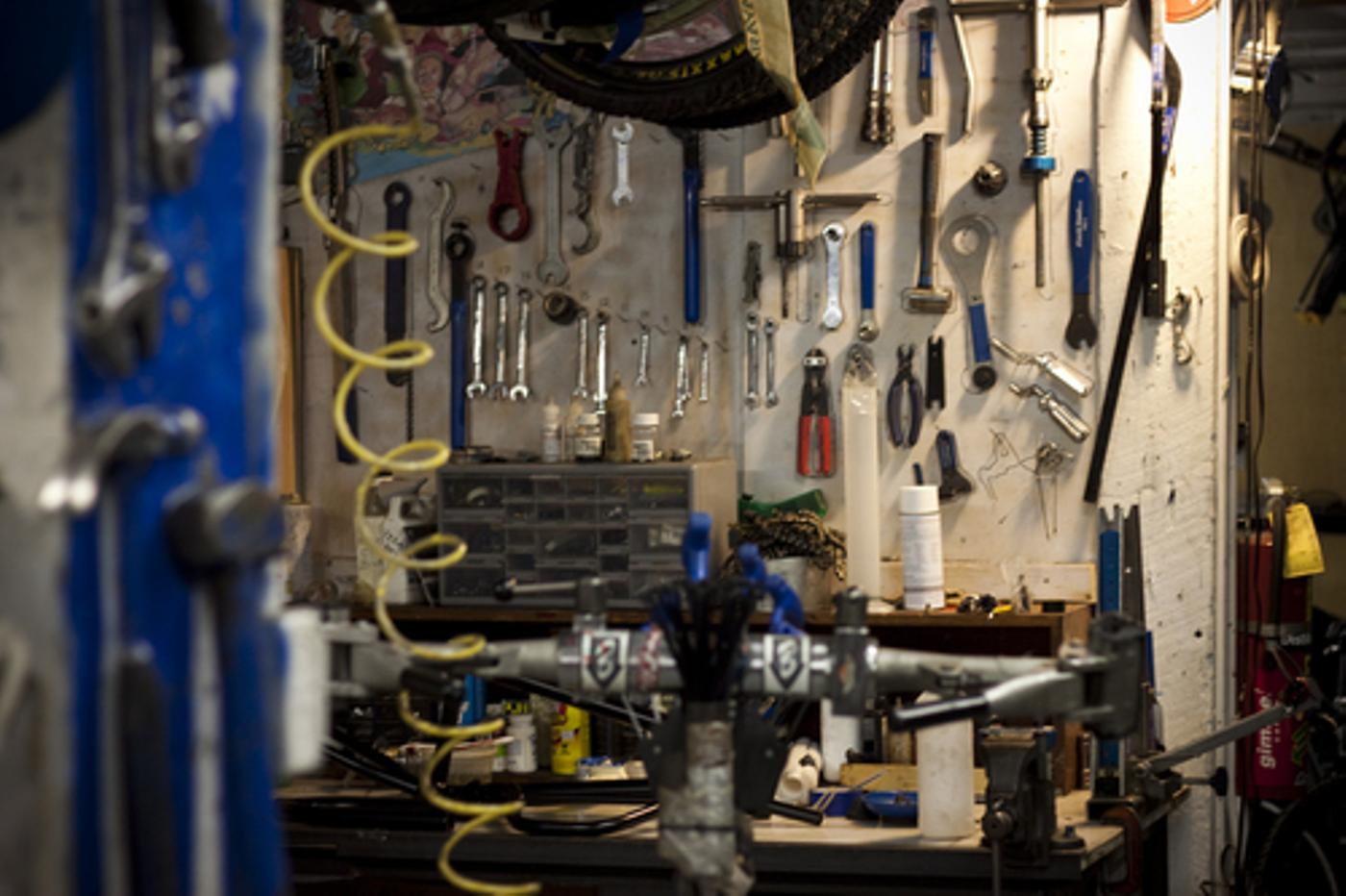 The mechanics area is usually housing one or two builds so it was a little odd to see it empty. 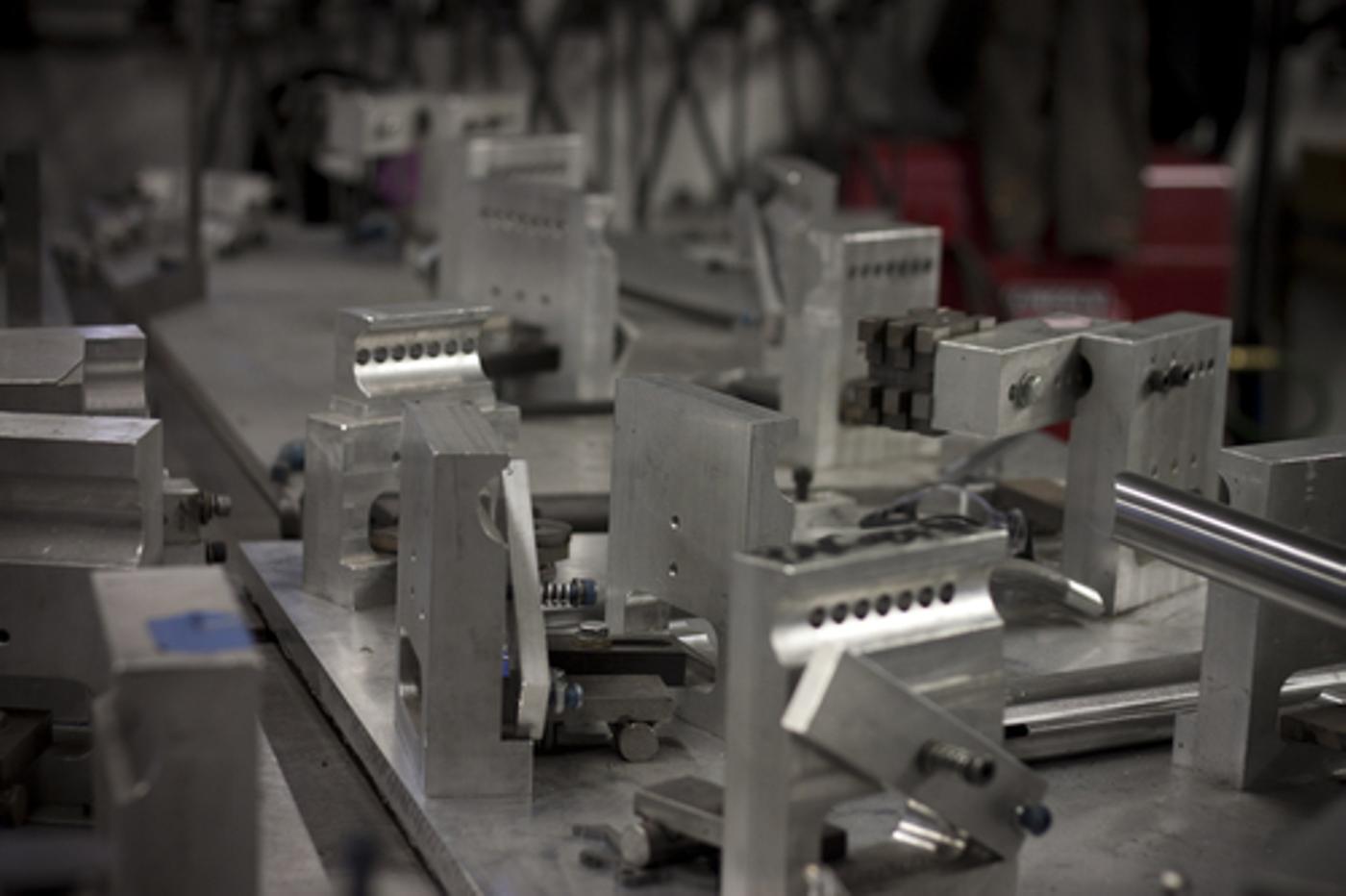 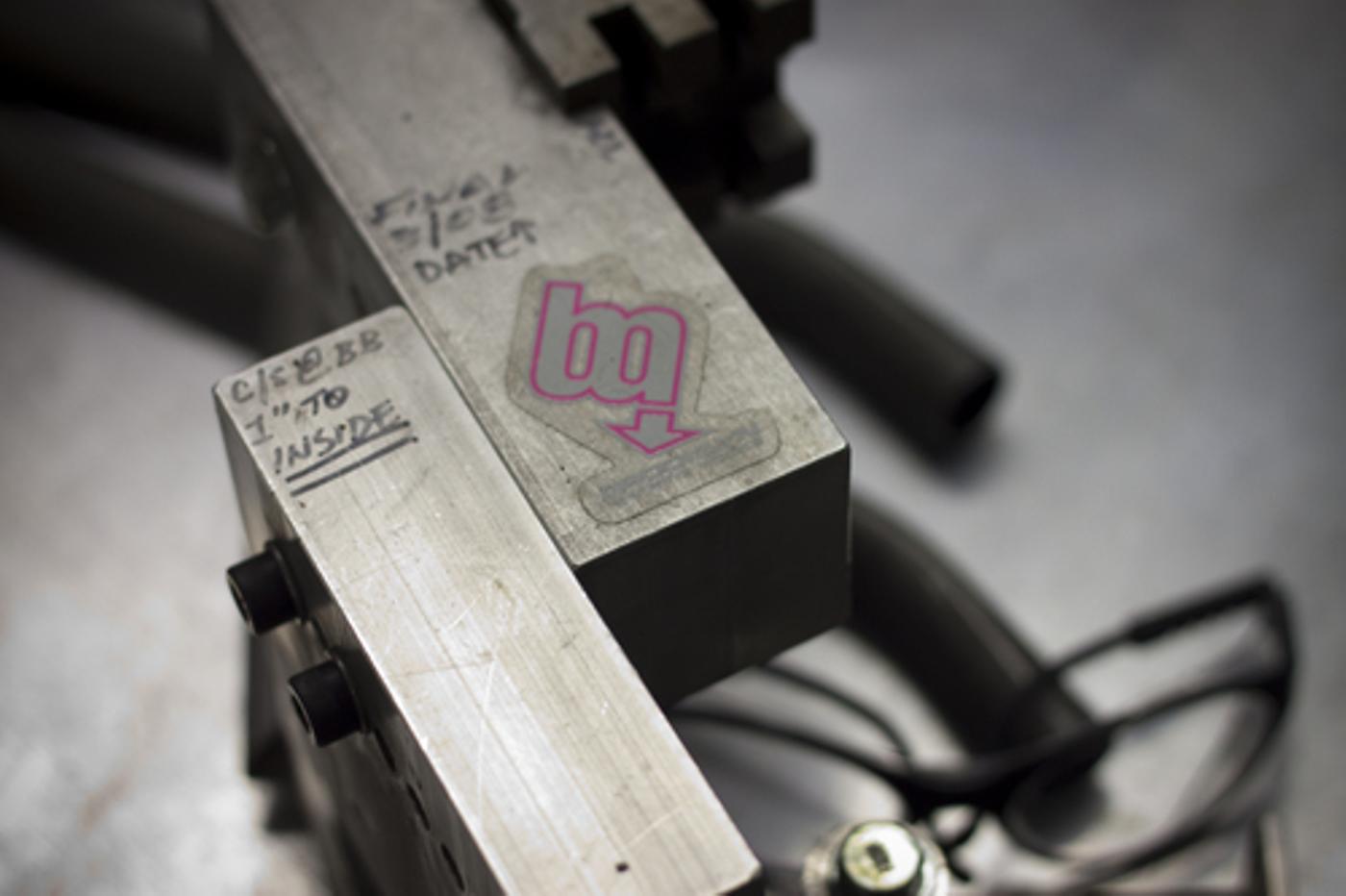 … and are marked with numeric reminders and branding. 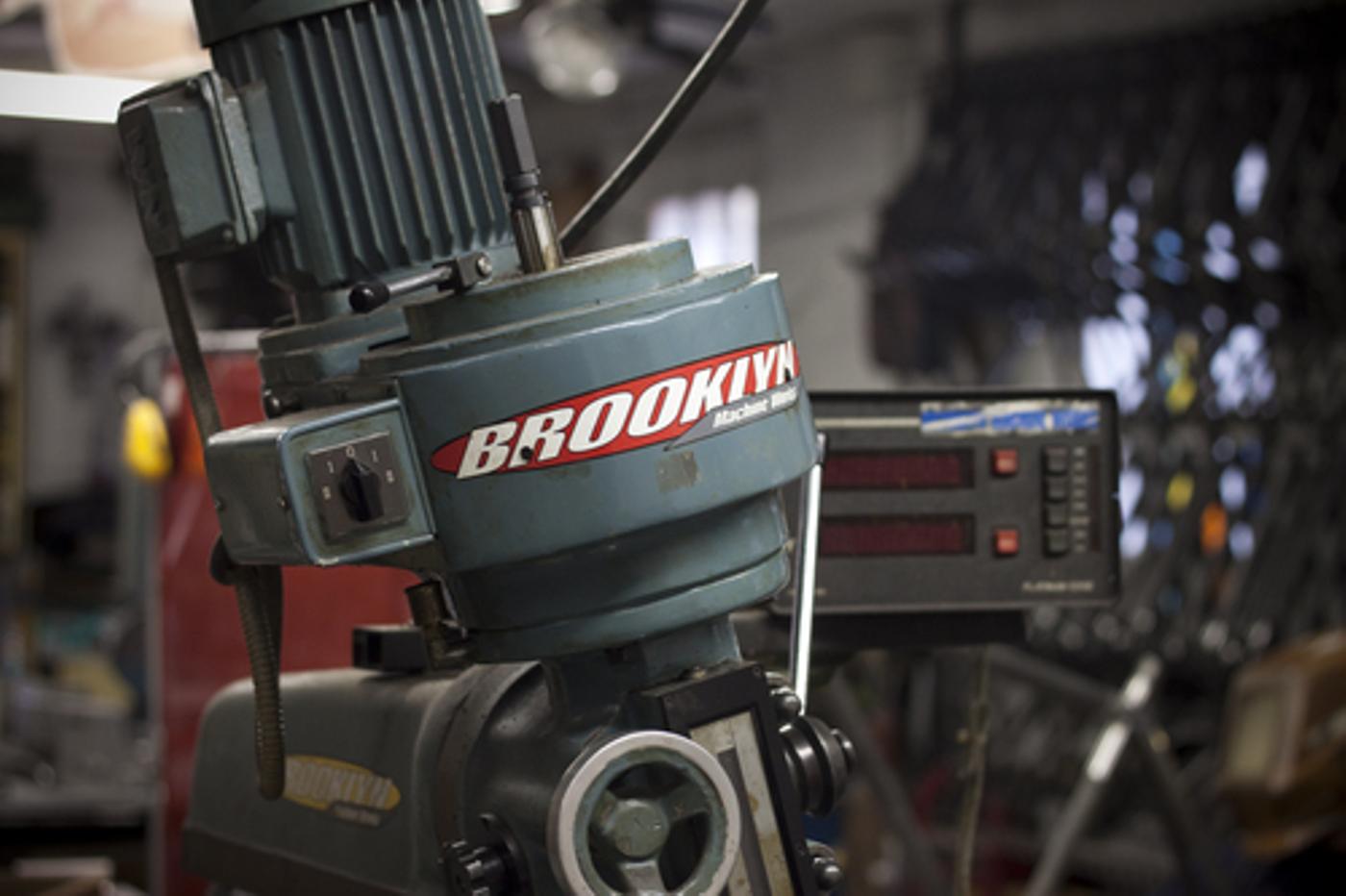 Some of the machines are adorned with older Brooklyn decals. Well, just about every machine bears them. 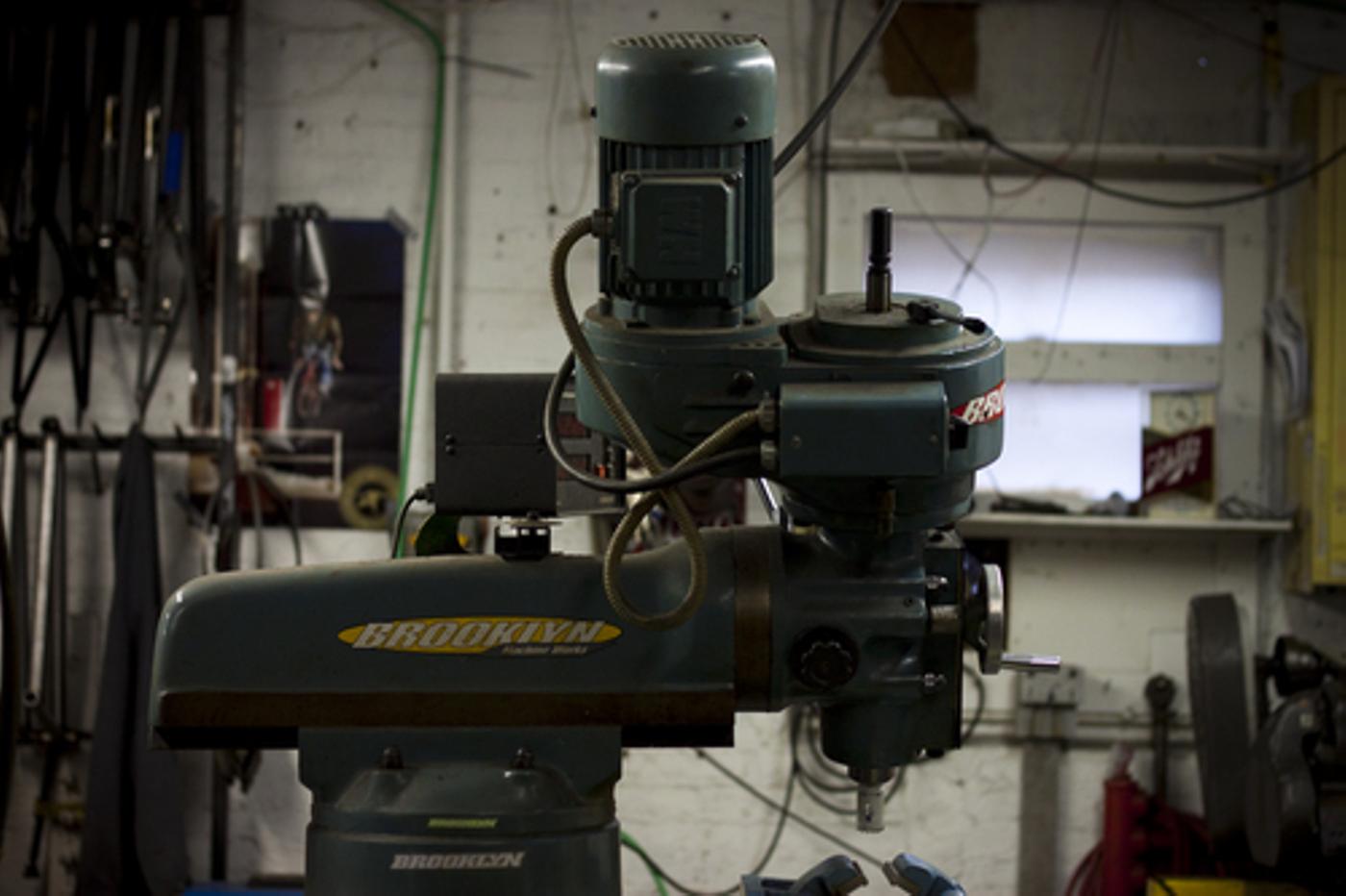 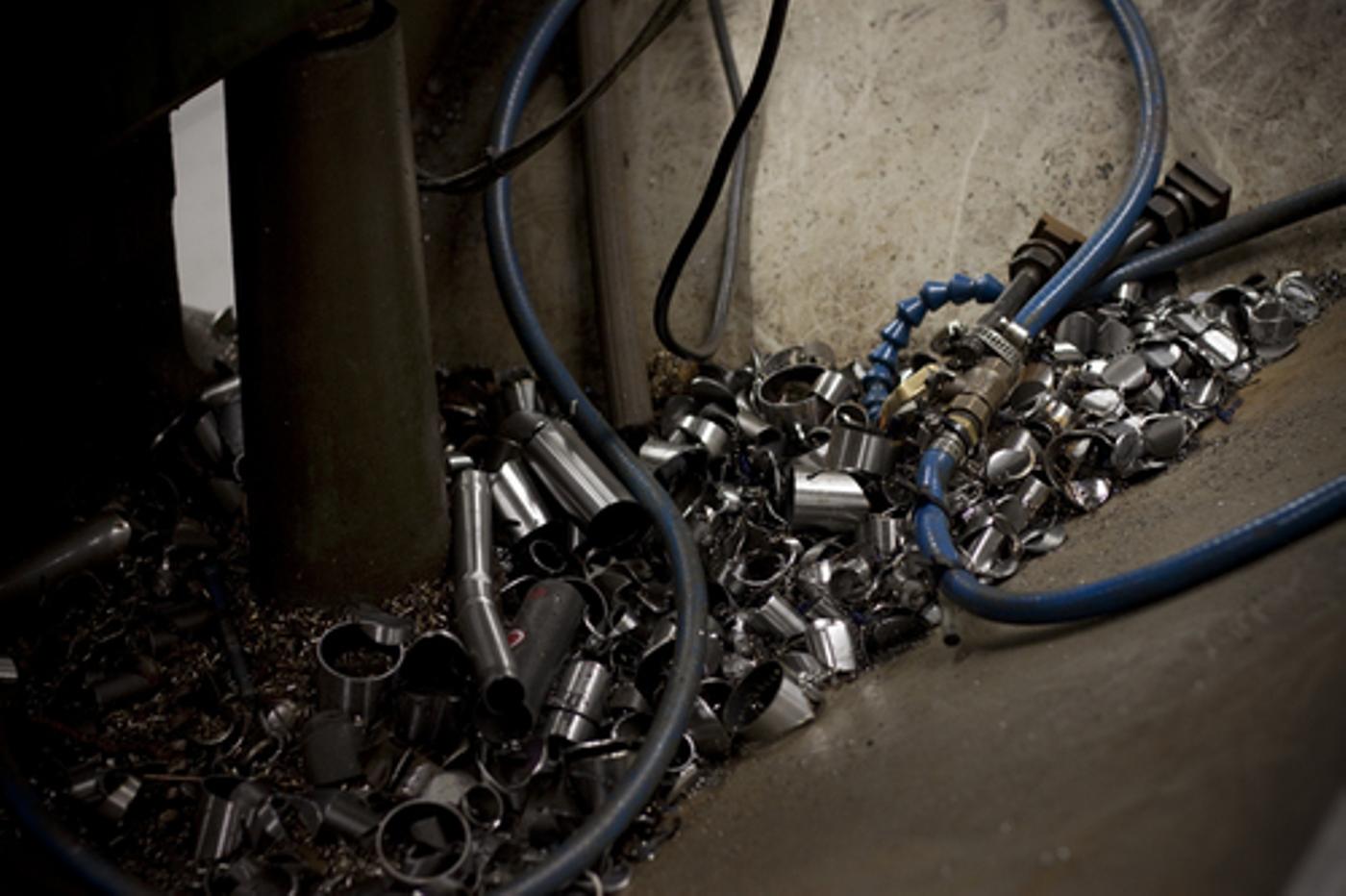 Layering that only comes from years of heavy use. 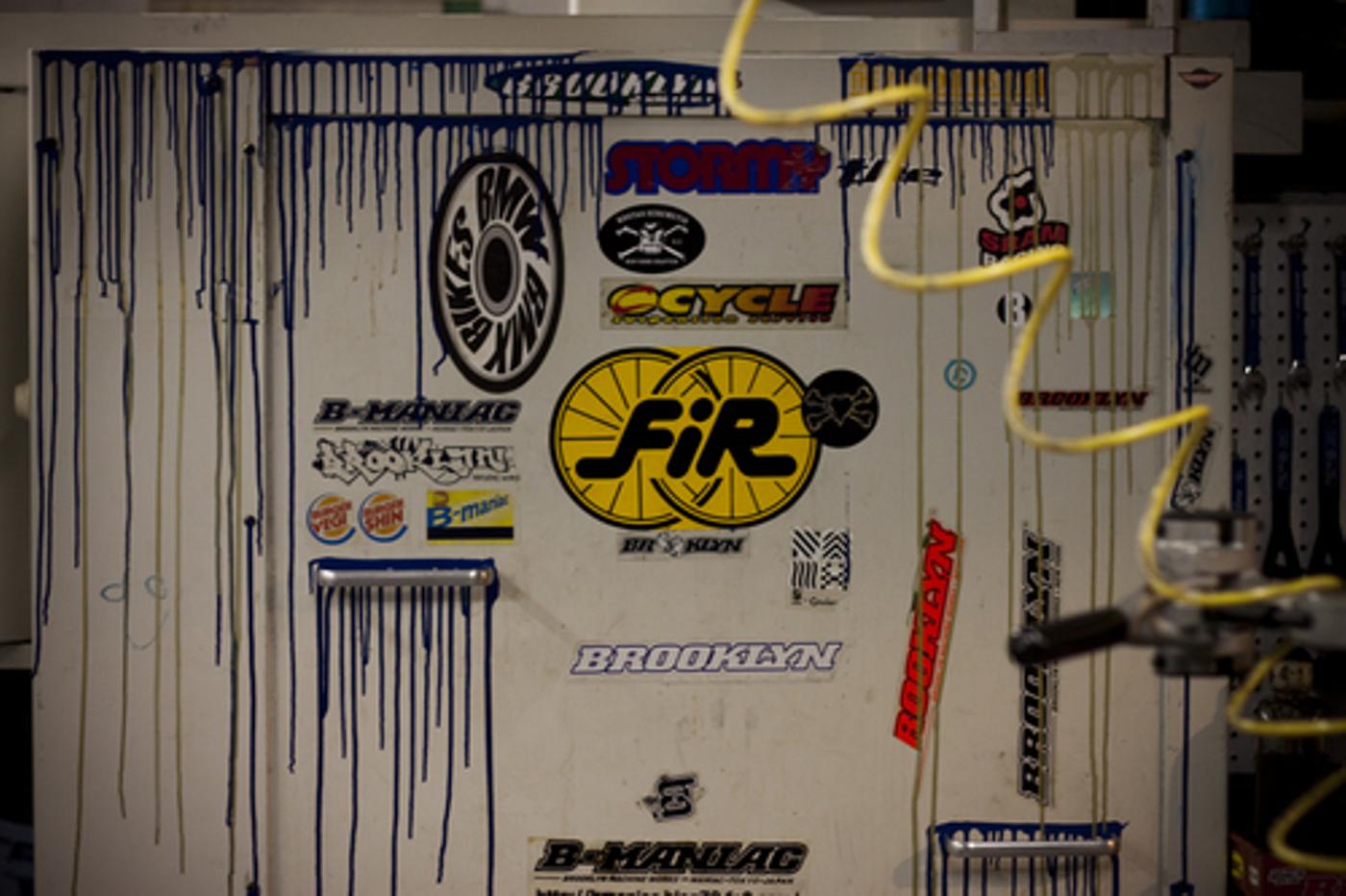 Stickers from all over the place and from years of collecting. It’s one of the things I love most about bike shops and bicycle manufacturers. It’s the difference between the sterile production houses and grassroots companies. Some of the new detailing on BMW’s newest bicycle, the Launchpad. A glimpse of what’s to come for BMW. An affordable complete? No way… You didn’t hear about it here, k? Protect ya neck and your head. What happens when a BMW and a Semi-truck collide. Luckily the rider, who’s a good friend of mine, was ok. The machine that brought BMW back up to speed back in the 90’s. A CNC machine. This computer-numeric-controlled router can mill out various components for the company, speeding up production time. This was laser-cut, not CNC’d but it’s still beautiful! A new detail in one of their bikes. Another laser-cut detail. A hitch cover on Joe’s Land Cruiser.

I wanted to say a huge thanks to BMW for everything they’ve done for me over the years and for being a beacon of craftsmanship and an inspiration for a new generation of fixed gears. As I alluded to earlier, there will be some big announcements from the company shortly. You can expect to read them here first.

I took a lot more photos, they can be found here on my Flickr.