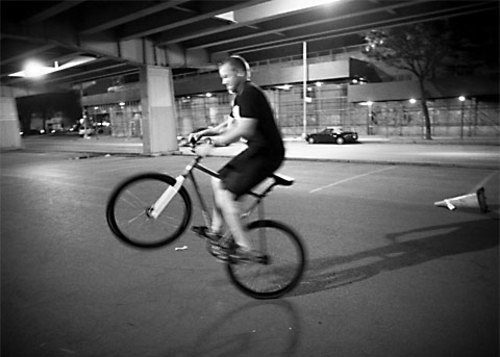 Before all my friends start to get all in a tissy over this article, let me clarify some points. David contacted me a few days ago with a simple question; “Do you know anyone who is into fixed freestyle in NYC that wasn’t featured in the Peel Sessions article from last summer?” Let’s see… No, not really. The bottom line is, there aren’t a whole lot of fixed freestyle kids in NYC and when you look to the fixed gear / track bike scene now in most major cities, it’s over-run by the fixed freestyle kids, especially out West.

Even with “twenty six fixed” coming on strong, the 700cmx army seems to be building up. More so now than ever. So what does that mean to the circa 2006 riders who were riding track bikes? They’re probably still on track bikes and road bikes and cross bikes. People who got into track bikes as their first bike ever are still enjoying them but they’ve also picked up other bikes, ones with derailleurs and learned that there’s a whole new world of cycling they might have never been a part of if it weren’t for their first track bike.

My main point that I was trying to convey to David is this; there are tons of kids buying fixed gears and track bikes for the first time. Most of these people are getting into the mainstream side of it; flashy components, hip-clothing and other notes taken from the skateboarding industry. Naturally there are the die-hards out there, but just like when everything goes mainstream, you’re essentially watering down the population. Some of these guys will stick with it, others will drop off the fad as quickly as they picked it up.

I think that’s what David was trying to say in the article. Not that the Messengers themselves are “slowly fading” as a career or a community, but that the idolization of them is slowly disappearing. I am in no way saying that it’s entirely due to the fixed freestyle movement, I’m just simply stating that this whole thing has become more mainstream and thus allowing a higher concentration of cross-pollination. Kids like track bikes because they look cool and are fun to ride. Now that they’re extremely popular in cities worldwide, you’re seeing a new look. One that’s not mimicking messengers; a look that’s more akin to the downtown cool guy aesthetic.

To also clarify to what Joey Krillz was saying in his first quote:

“Previously, in the scene, if you were a courier, you were it,” Mr. Krillz, 29, said. “But now it’s like, no one cares if you’re a messenger anymore. It’s all about the tricks.”

I don’t think he meant in the NYC scene, I think he was speaking globally to the “new comers” who’s first fixed gear is a trick bike.

What do you guys think?