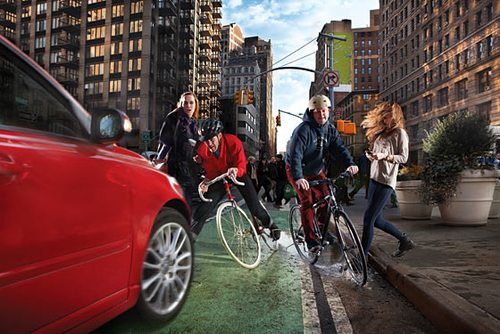 This is pretty accurate!

The above photo-illustration reads “The biker careers against traffic; the driver veers into the forbidden lane; the jaywalker marches, oblivious. But only the sucker yields.” and the article asks “is New York too New York for bike lanes?”. I don’t think NYC it too NYC but I think people are mostly looking out for their best interest, i.e. themselves. If people took the time to respect all forms of pedestrian and vehicular movement throughout the city, it would be a different place all together. But that’s asking a lot.

Personally, I was fine riding in NYC without the bike lanes. But a lot of people weren’t and still many aren’t safe riding in the pothole-filled, door-opening game of frogger. NY Mag tackles this issue in a new editorial forwarded to me by a reader.

Check it out here.