We’re big into hardtails here at the Radavist. While my personal bikes are all steel, riding carbon bikes can be a real treat, especially when the company has put so much thought into the design.

Yeti has a long history of designing capable and attractive bikes. The original ARC was a collaboration with Easton and the intent was to make a truly lightweight machine in that era. The OG ARC’s aluminum frameset weighed a mere 3.2lbs, which was a groundbreaking accomplishment for 1991 and those bikes are still iconic, even today.

You could say Yeti had a lot riding on this new ARC design and there were a few decisions that set this new model on a different trajectory from its predecessor. After riding this bike for a month here in Santa Fe, I’ve finally wrapped my head around how to review it, pointing out its accomplishments and my own personal critiques of this entirely new model, so read on for more… 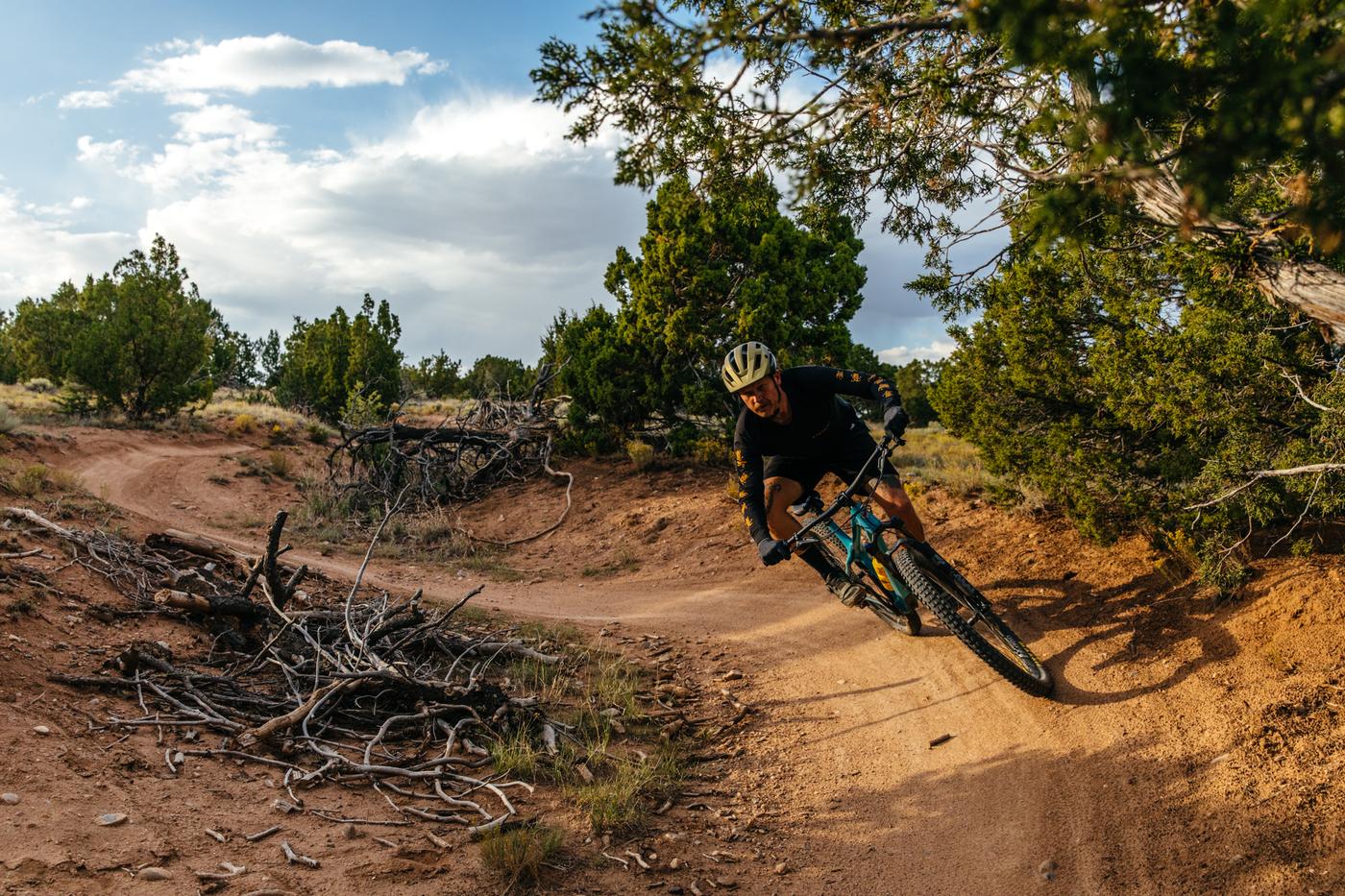 The ARC is a carbon chassis hardtail with a 130mm suspension fork, a progressive geometry, clean, elegant detailing, and the sort of linework you’d expect from a juggernaut of carbon bike design like Yeti. While it’s by no means as flashy as the limited edition 35th anniversary model, the turquoise frame, sleek component selection, and beautiful stance still commands your attention. If the bike didn’t pique your interest, I know that self-filmed Joey Schusler edit did.

What it’s not is an aluminum, loop-tail, race machine like its predecessor. Sometimes even a throwback can transcend nostalgia. 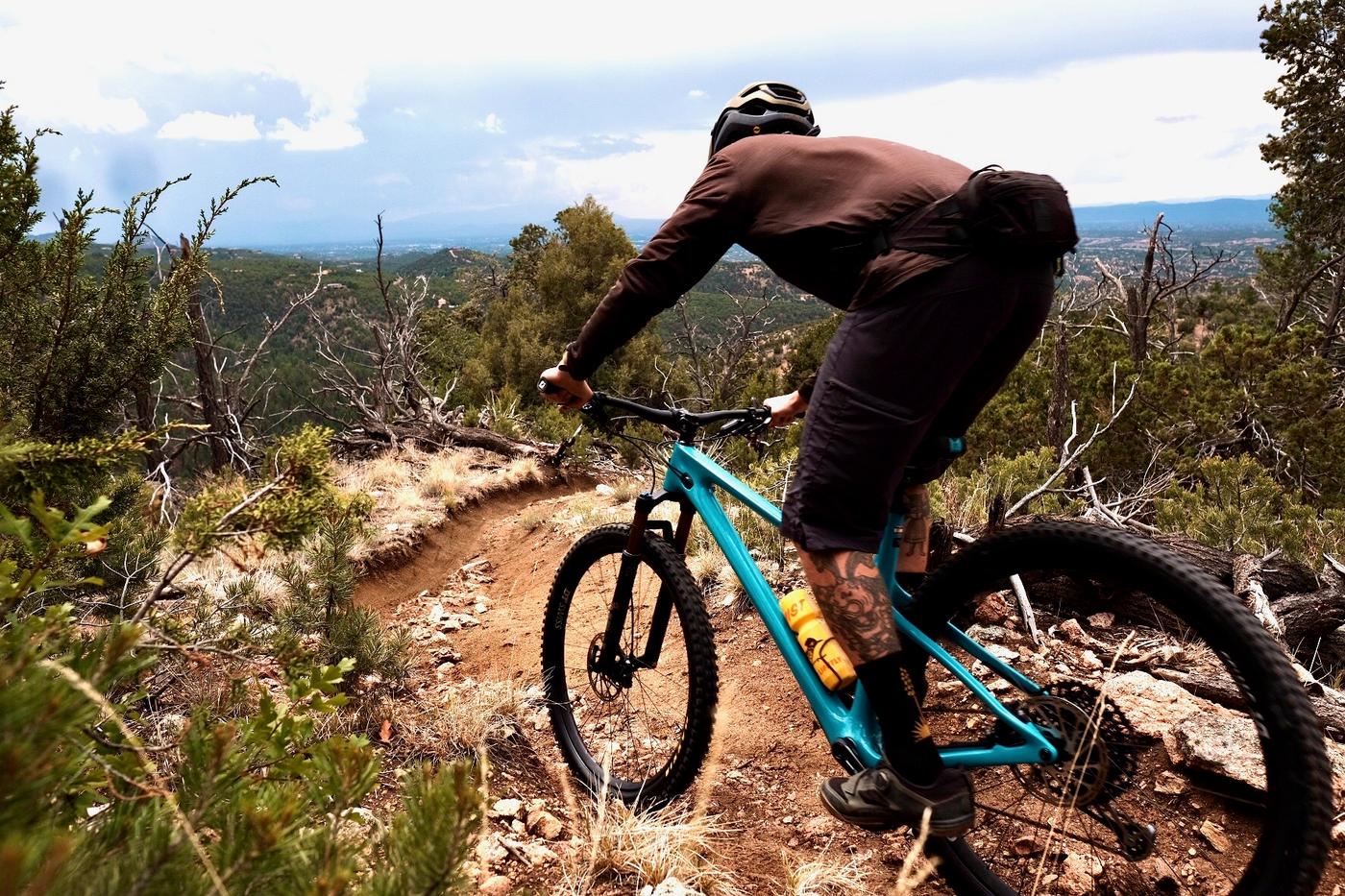 Yet Don’t Call it XC

There’s a misconception about hardtails within the cycling industry and the various mountain bike sub-cultures. Just because we’re riding hardtails, doesn’t mean we are XC-minded individuals. I don’t really care about speed – or weight for that matter – but I do enjoy the feel of a lively bike. My point is, we’re not riding hardtails because we’re weight weenies, hell-bent on being fast, we’re riding them because they offer up a different approach to riding.

Sometimes riding a 150mm travel full suspension gets old on the same ol’ trails. Switching between a rigid, a hardtail, a full suspension, and even a capable gravel bike just keeps the mundane, day-to-day riding on your local dirt, more interesting. At least, ATMO.

I think I speak for a lot of people when I say a hardtail is just a rung in the bi-directional ladder that is MTB design and evolution. Take two steps up or three steps back depending on your mood.

Sure, plenty of companies market their lightest, most nimble bikes as XC race machines, and yeah, those are usually hardtails, so I get why people look at these simple(r) bikes and think they’re for the competition-minded racer contingency. Yet, that’s not always the case. 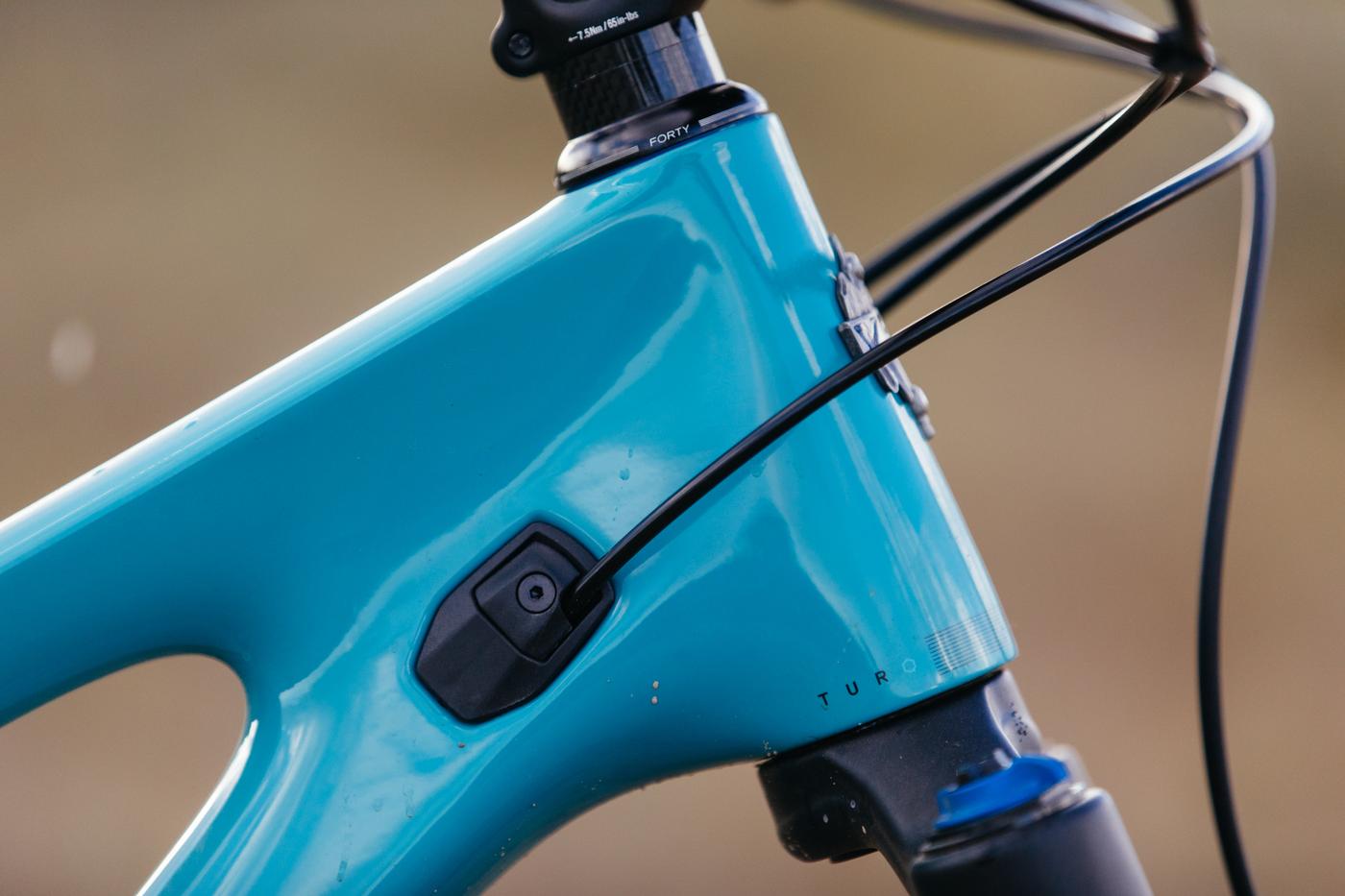 Yeti knows how to design exceptional bikes. Any time I’ve thrown a leg over one of their full-suspension bikes, I’ve had nothing but fun riding them. The same goes for this model ARC. Short of the brand designing a gravel bike, the ARC sits as a loner in the lineup alongside its gargantuan siblings and you know what? It holds its ground quite well in terms of detailing, geometry, and handling. 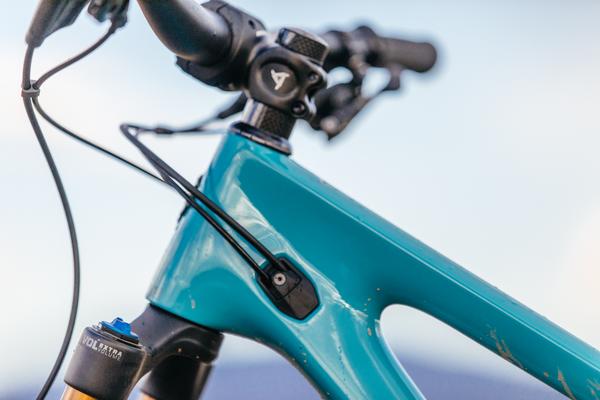 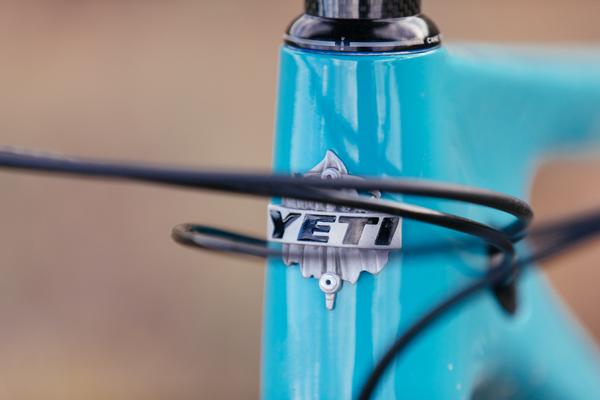 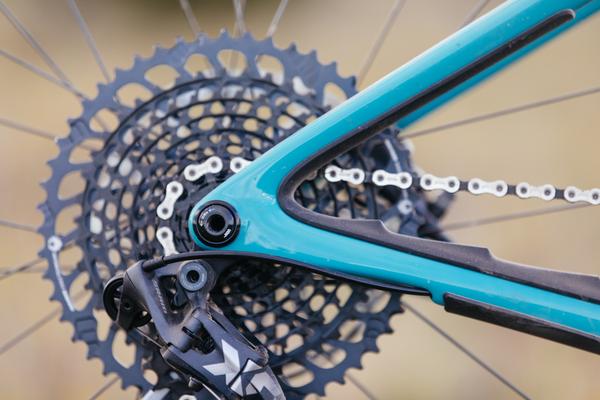 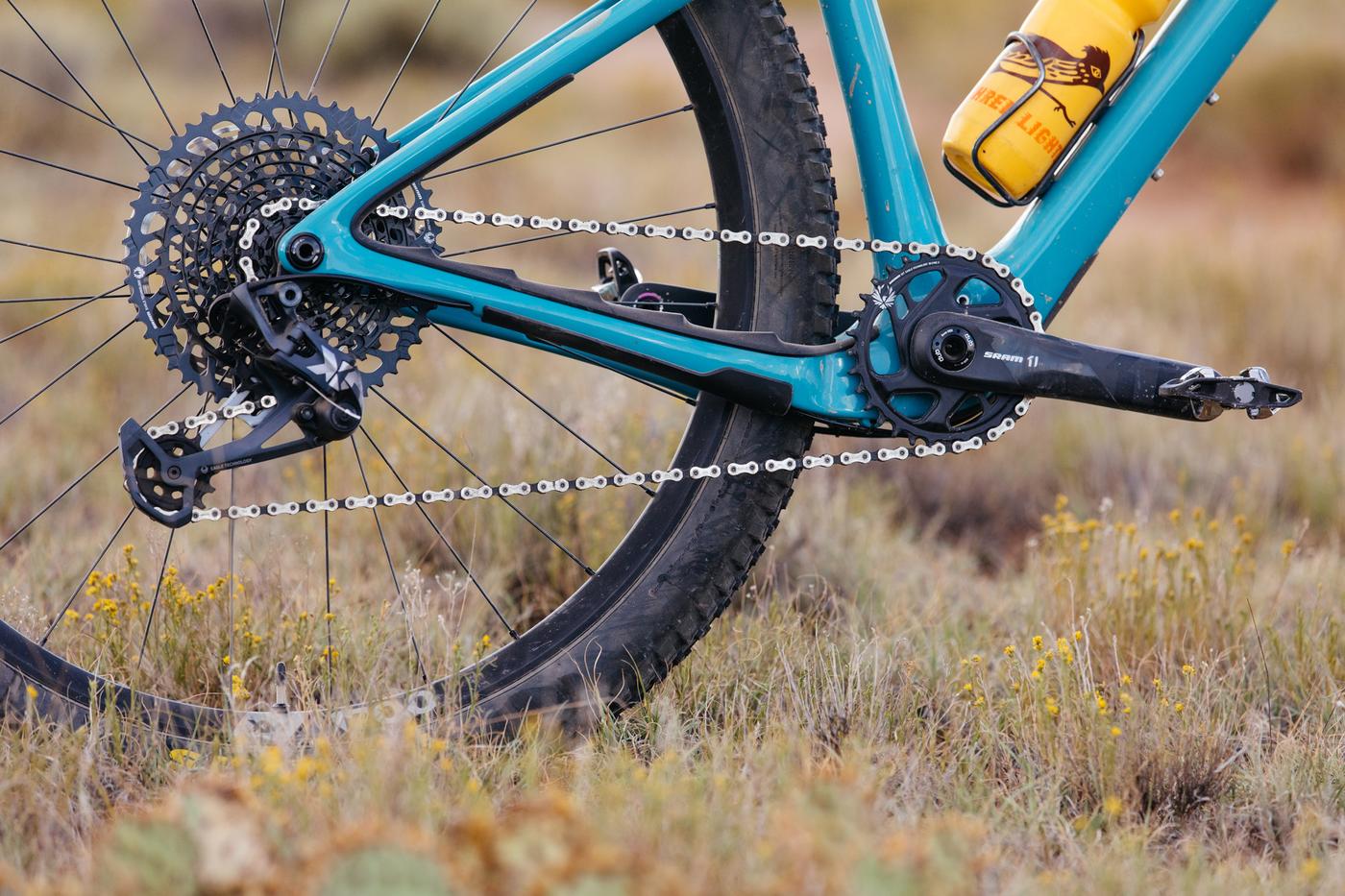 The seamless confluence of tube diameters and profiles delivers both visual flow as well as a cohesive feel with each pedal stroke. You don’t feel specific zones of the frame moving, you feel the entire chassis move as one. This is a sensation that is the result of competent and cohesive frame engineering.

Integrated headset cups, smooth transitions, an asymmetrical rear triangle, and an elegant seat tube cluster round out this well-constructed carbon capsule of curvatures. 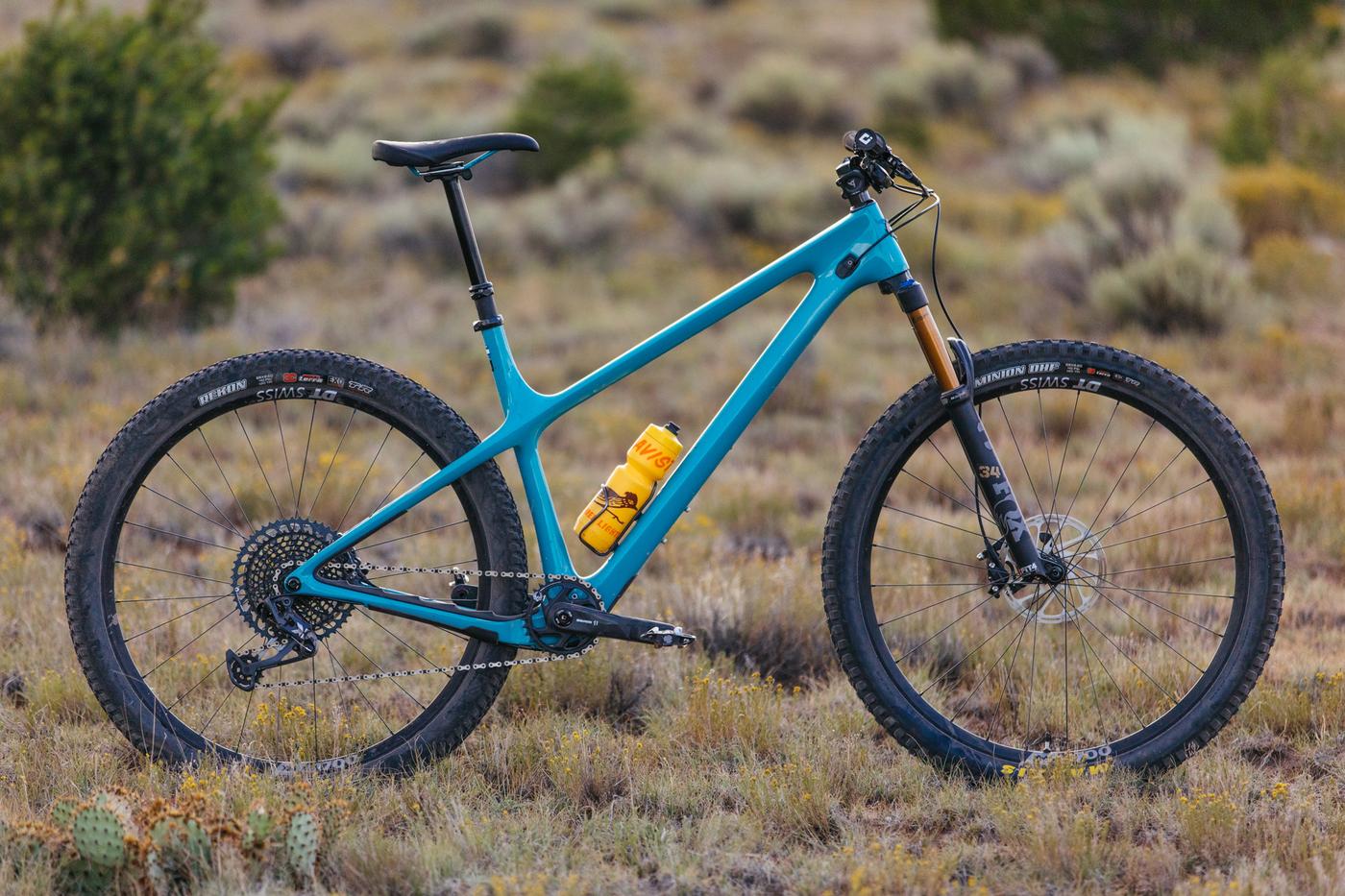 Yes, this is a modern hardtail, no questions there. Without going to the extremes of the current trend in MTB design, the ARC sits effectively with a 76º seat tube, which makes climbing steep trails easier, and a 67º head angle, which allows the bike to be pointed downhill easier, while not being too floppy on the climbs. Steep in the rear and slack-ish in the front, along with an extended reach, and 433mm chainstays place this bike right in the year of our Dark Lord, 2020, not 1991 like its ancestor. 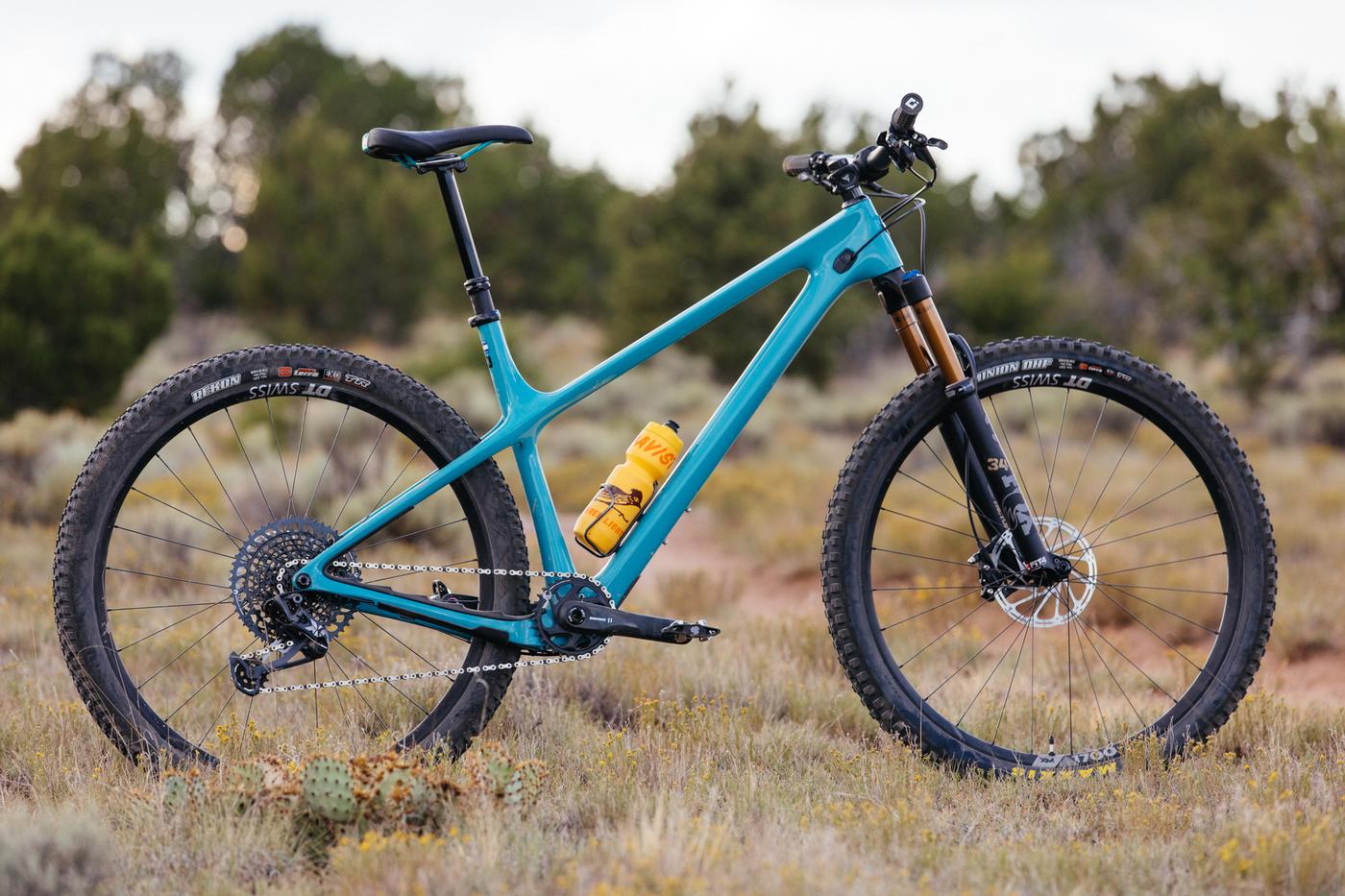 If the ARC were an animal that evolved to its current phenotype as the result of its environmental influence, one might make a lot of assumptions based on its observable characteristics, so let’s look at that real quick.

The ARC’s frame design is hyper-compact. With a seat tube extension to meet the dropper collar, it opens up a lot of standover space. While the bike is specified with a 175mm dropper, as you can see, it will take a 200mm travel post easily. Especially if you’re a gangly moose like myself. 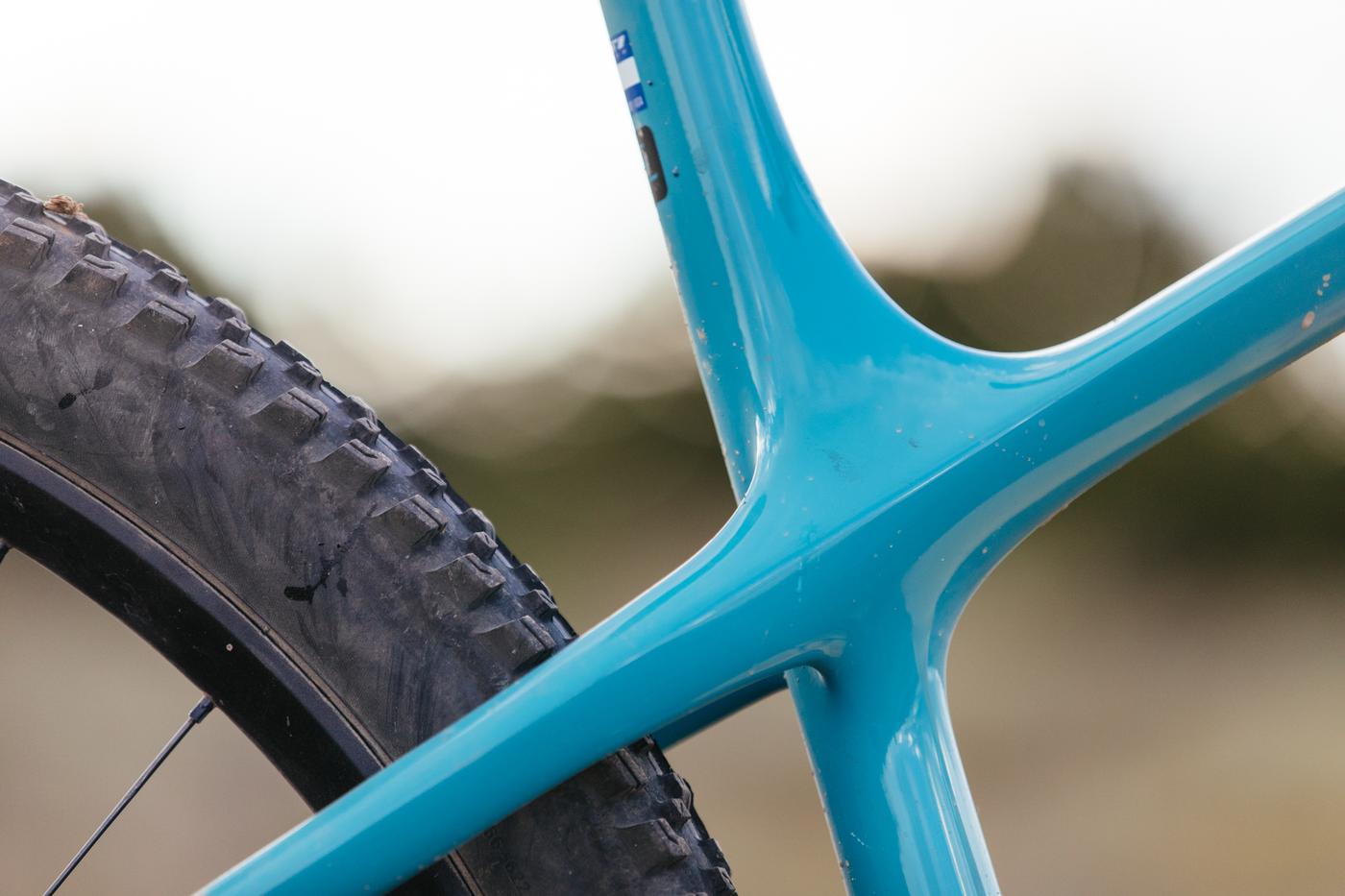 Typically, brands like Chromag, Orange, and other progressive hardtail designers, produce bikes with such compact frames because they’re being drug downhill by massive, 150-160mm forks, slack front ends, and big, meaty tires. Compact frames let you move your body around the frame to maneuver over obstacles and give you the ability to allow your legs to soak up a lot of the blows the rear of the bike takes on. Yeah, there’s no rear shock, but that’s a lot of room for the bike to move. 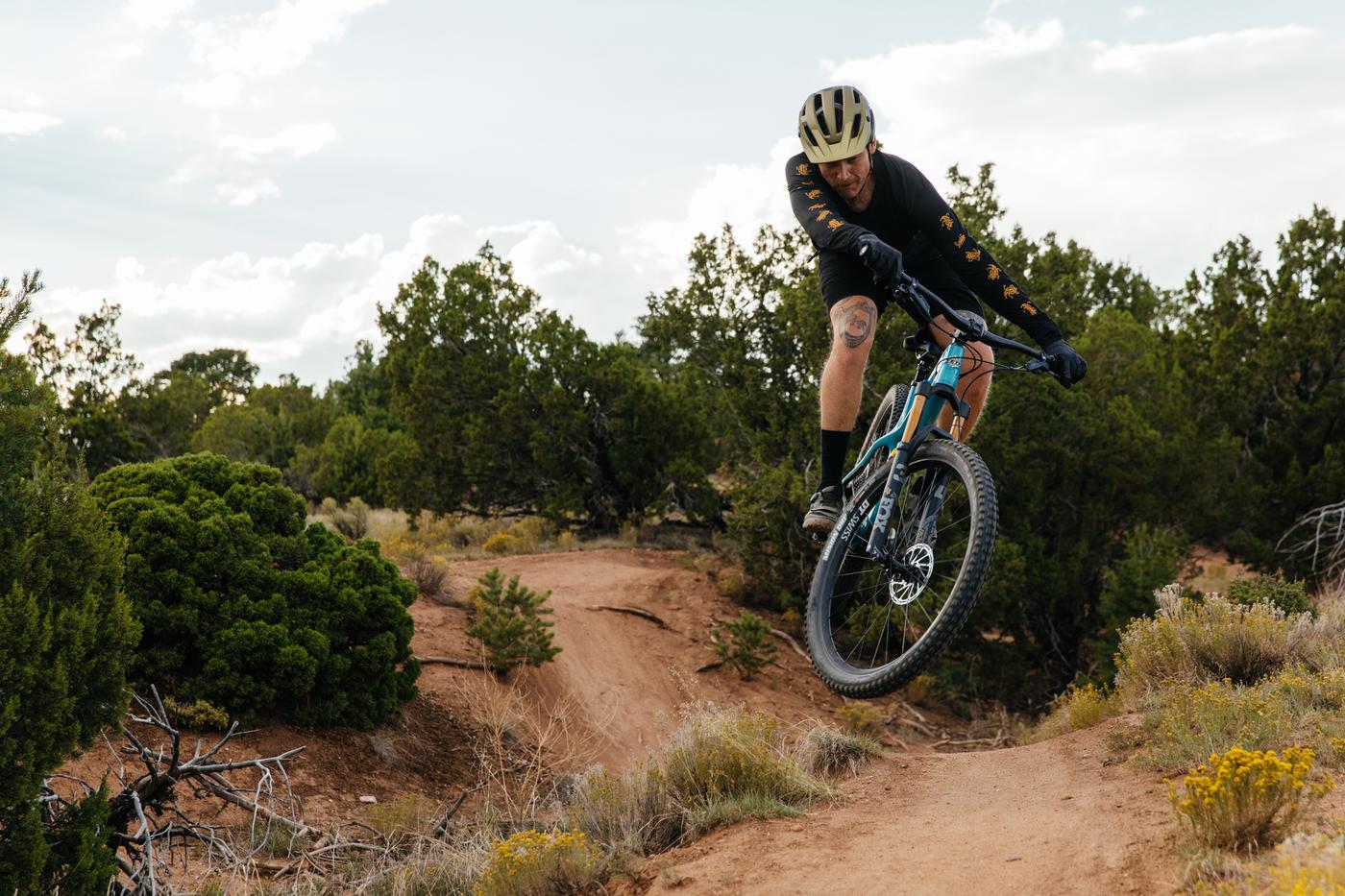 I thought I’d be brutally honest about my internal dialog here. It’s not necessarily a critique about this bike as much as it is my own personal view of what a hardtail can and should be. Especially when brands make bold moves like this one. When you take a risk and design something new from the ground up, feedback like this can be really helpful. 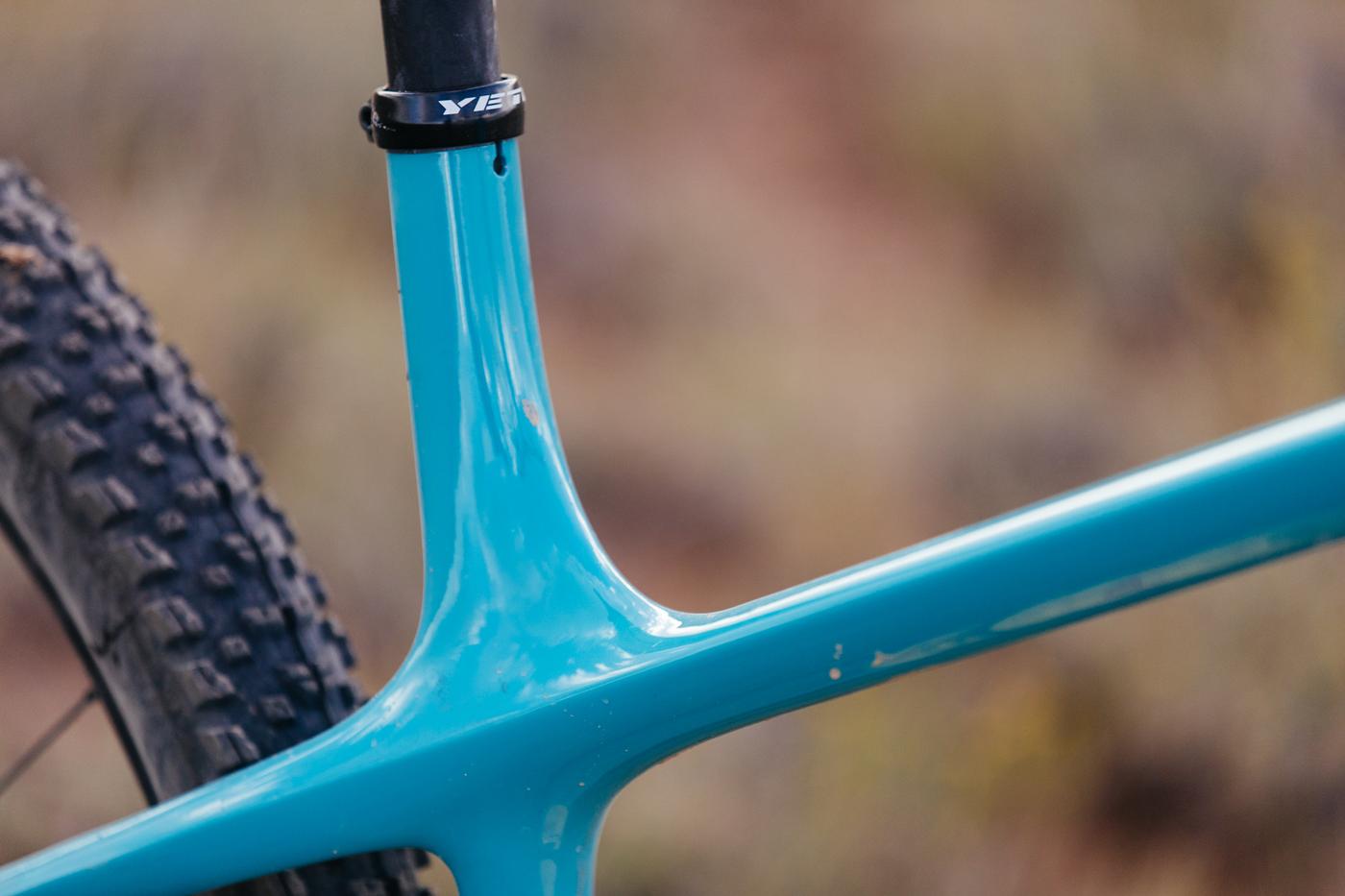 I bring up this compact frame design for a reason. Where I run into one of my critiques of the ARC is that because of the compact frame, we’re lead to believe this bike would be a bit rowdier and roll behind a 150mm fork with a slacker head angle. Instead, with a 130mm fork and a 67º head angle, you’re still a bit more focused on your line choice. The ARC wants to play rough and it can by all means but I found myself pushing this ultra-light bike into situations it quickly pushed right back on.

With the dropper post down and my riding position more centered within the frame, I did find it to feel a little under-supported on really steep trails. Yet, I can not deny the exhilarating riding experience of a bike with a slightly steeper head angle and 2cm less travel like the ARC on more fast and flowy stuff. 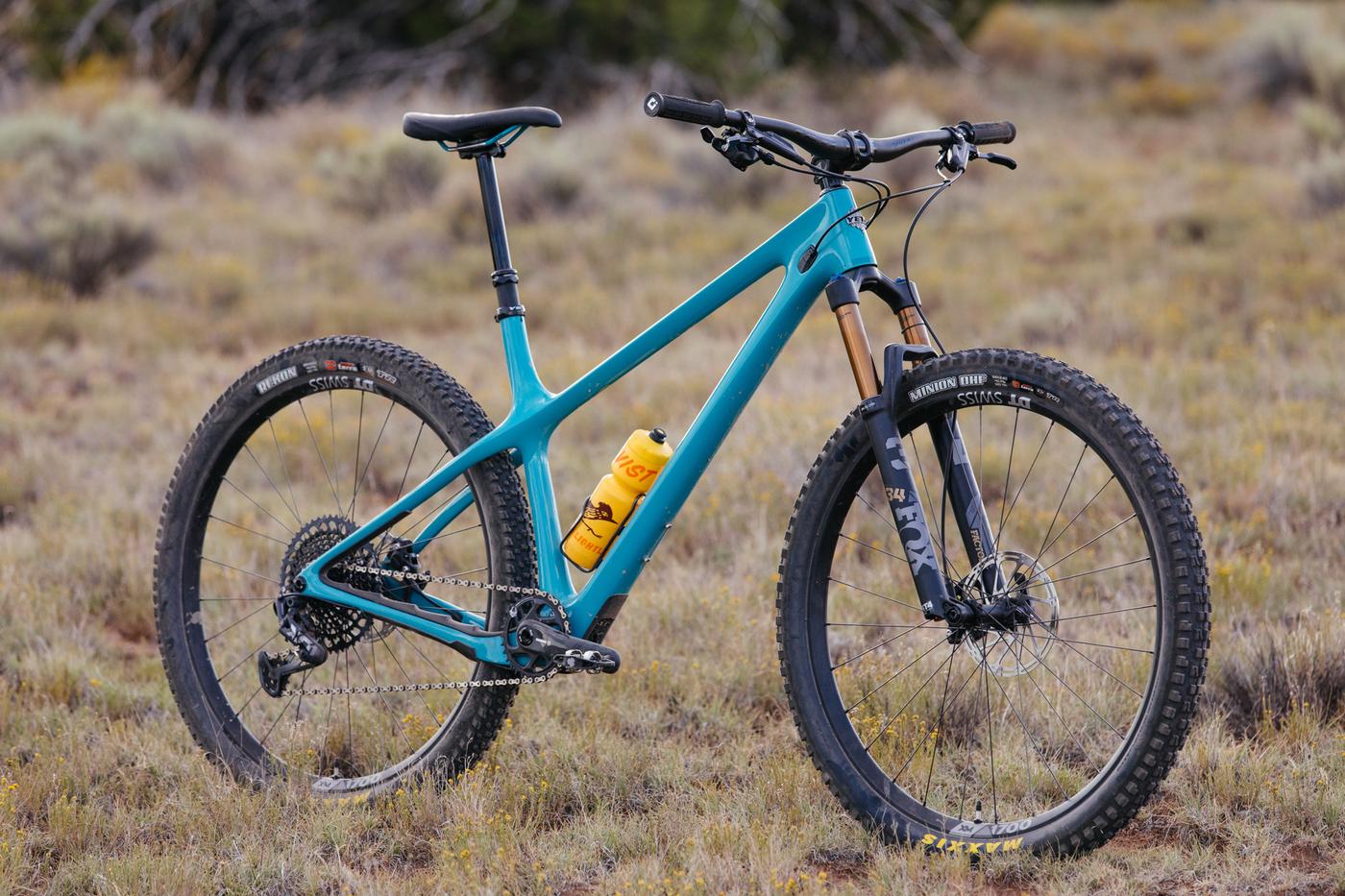 Another related qualm is due to its ultra-compact design, you’re limited on water bottle storage and if you were to take this on a bike tour, even the XL I reviewed doesn’t offer up much space in the front triangle for a bag. Again, these are my personal preferences. Part of owning a bike like this is riding longer, further, and deeper into the backcountry. It’s kinda hard to do that with one bottle. 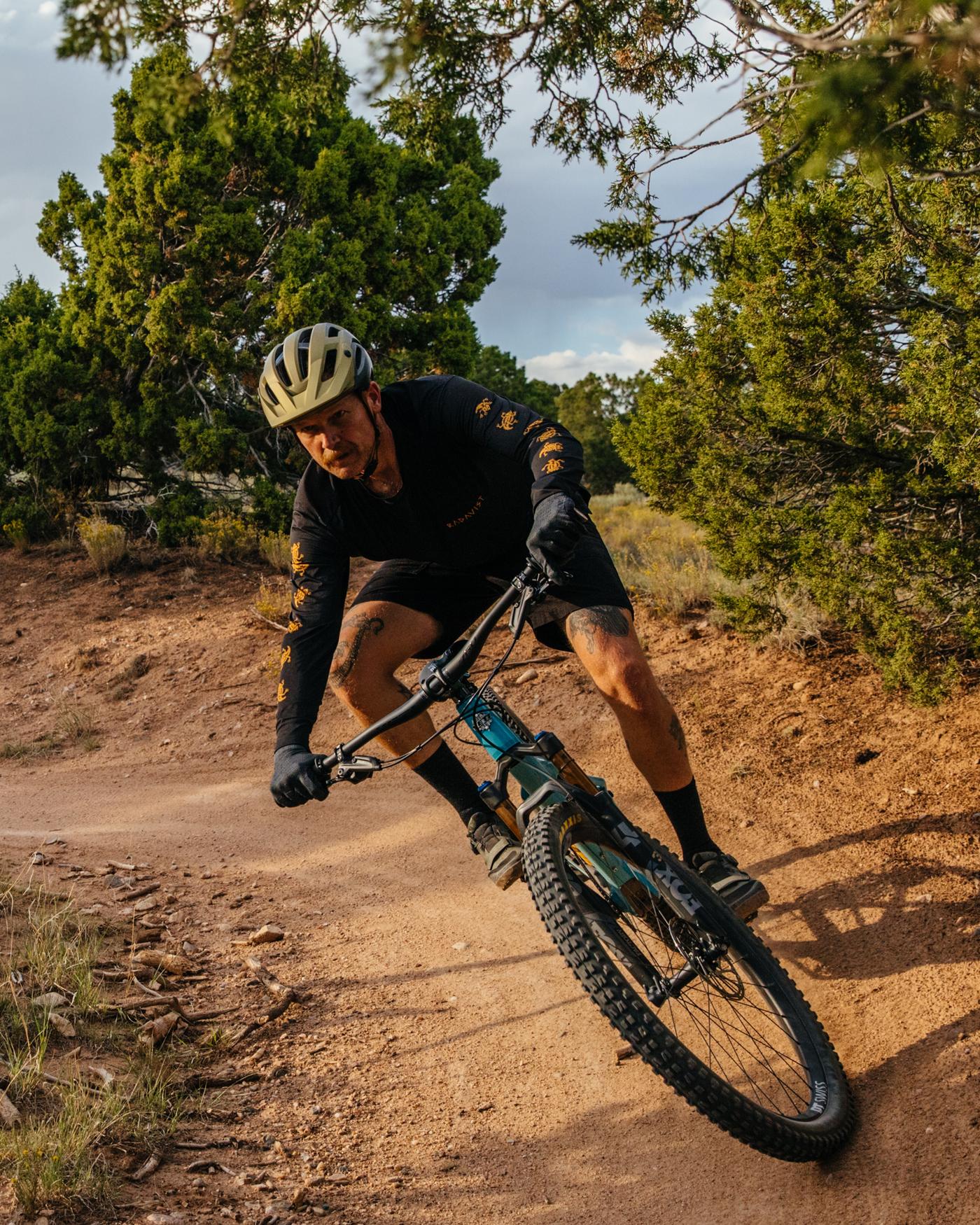 Throughout the review process, I was constantly impressed with how well-balanced the ARC was and how easy it was to whip around, thanks to the compact frame design, and for shorter riders, this compactness allows for more standover, so there’s that. I suppose I was just thinking about how one of the beautiful things about hardtails is their versatility. Take it on a trail one day and on a bicycle tour the next, without sacrificing frame storage space or water bottle capacity. For me, I felt like the ARC was somewhere between a backcountry expedition rig and a fun and light whippy sportscar for trails, with the main deciding factor its ability to take “stuff” like two water bottles with you. 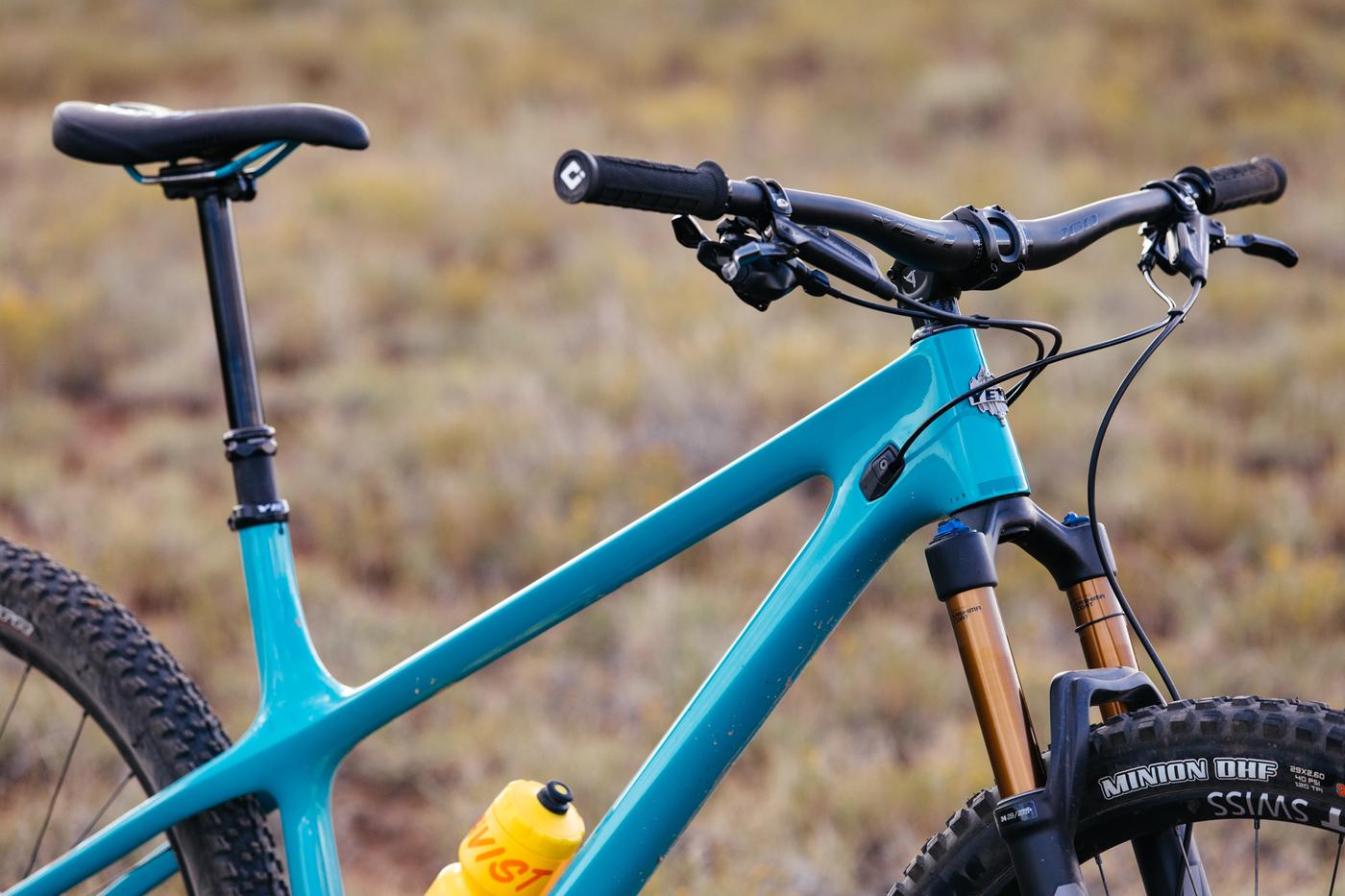 TL;DR PT2: The ARC just felt like it was dancing between two worlds, not committing to either fully. A lot of this has to do with my personal experiences with hardtails and isn’t necessarily a deal-breaker for this bike at all, but it was worth noting. 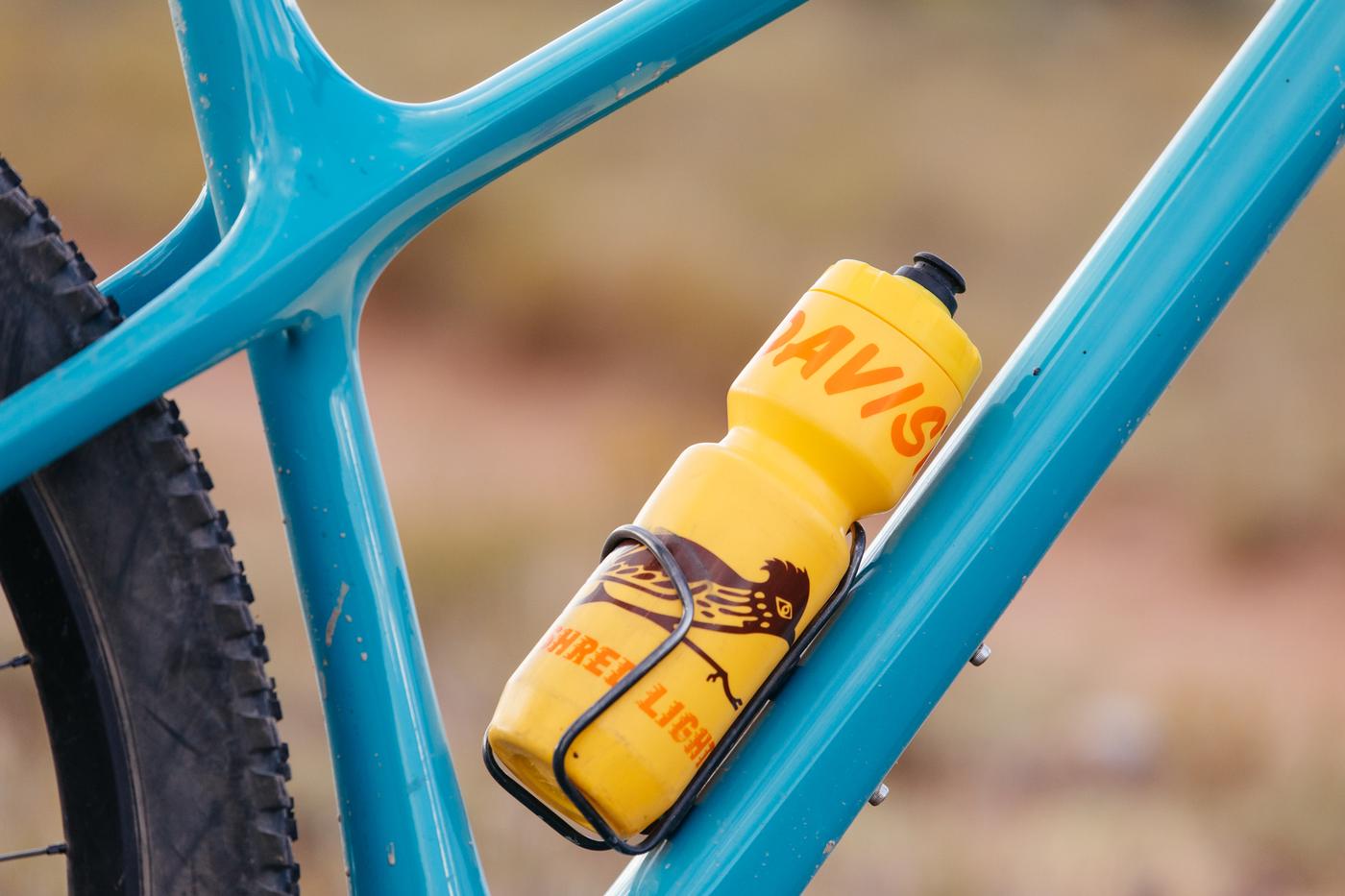 I should point out, there is a bottle cage under the downtube, but for many reasons, I feel like those locations are great as a third, not a second bottle home. Three bottle cages would be even better! 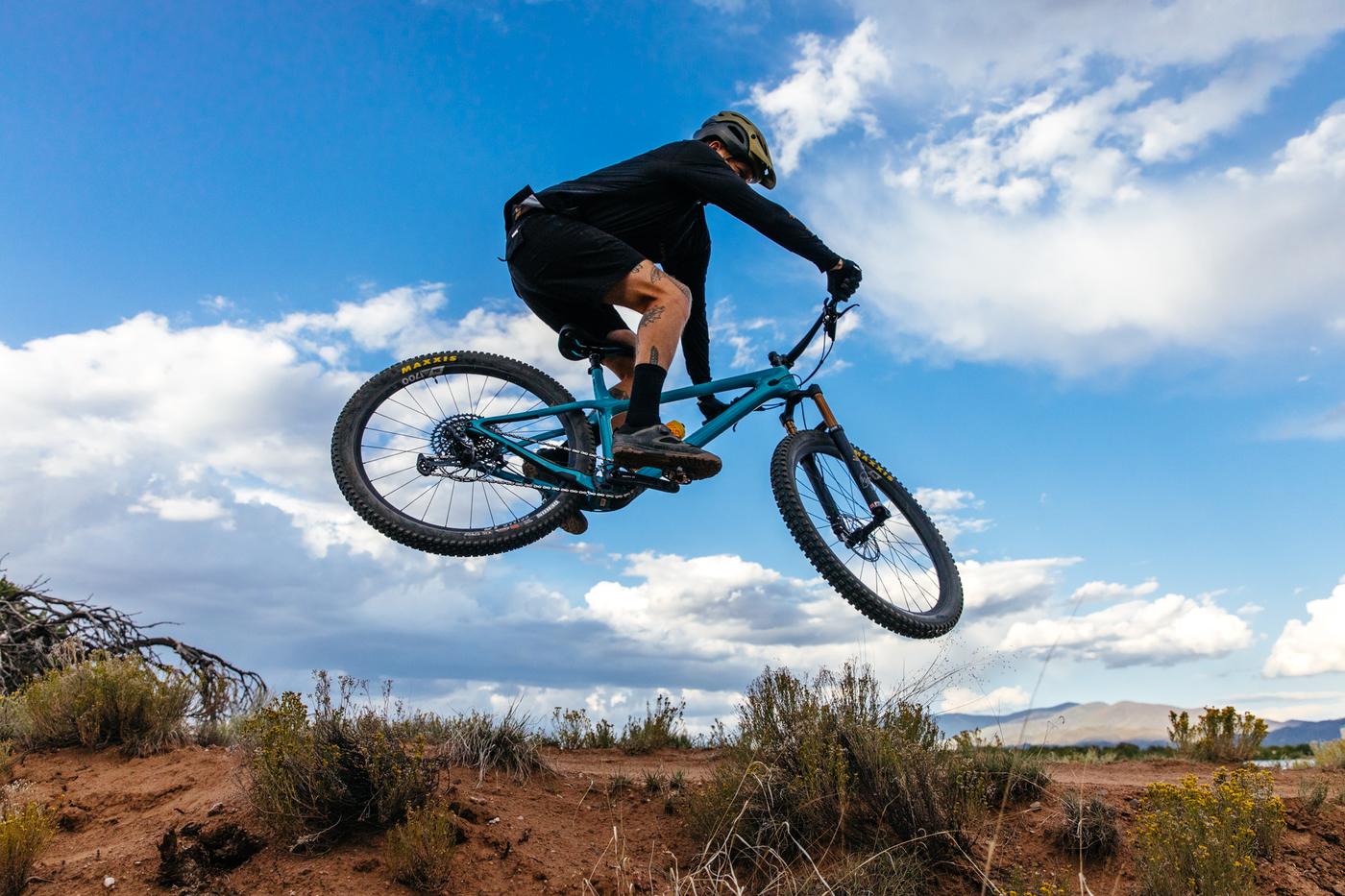 I often think about bike design, the marketing, and the product’s intent a lot, in relation to the target customer. We all know brand allegiances exist. Some people will only ride a Santa Cruz, or a Specialized, or Kona, etc. Each of these brands have endemic models to meet any consumer desire; there’s no need to go out of brand for a specific type of bike. For years, Yeti has only had full-suspension rigs and now they have a hardtail. Yeti is a big country, all-mountain company, and the ARC sits at home contently alongside, or perhaps under, its siblings. The frame design, product spec, and yeah, color screams make no mistake, this is a Yeti.

Personally, I feel certain fatigue with a lot of MTB marketing, extending to the videos, press releases, and product launches. So much emphasis is put on smaller tweaks, new paint, and product build specs. Hey, I get it. No judgments here. It’s just refreshing to see a brand like Yeti put time and energy into designing a hardtail in 2020. It instills a new hope in me that maybe the industry is due for a full 180º, a new discussion on how we use trails, how we ride bikes both uphill and down, in town and deep, deep into the backcountry.

You can make a capable, all-rounder bike that speaks to customers both new and old, while not limiting its potential for it being a quintessential jack of all trades. 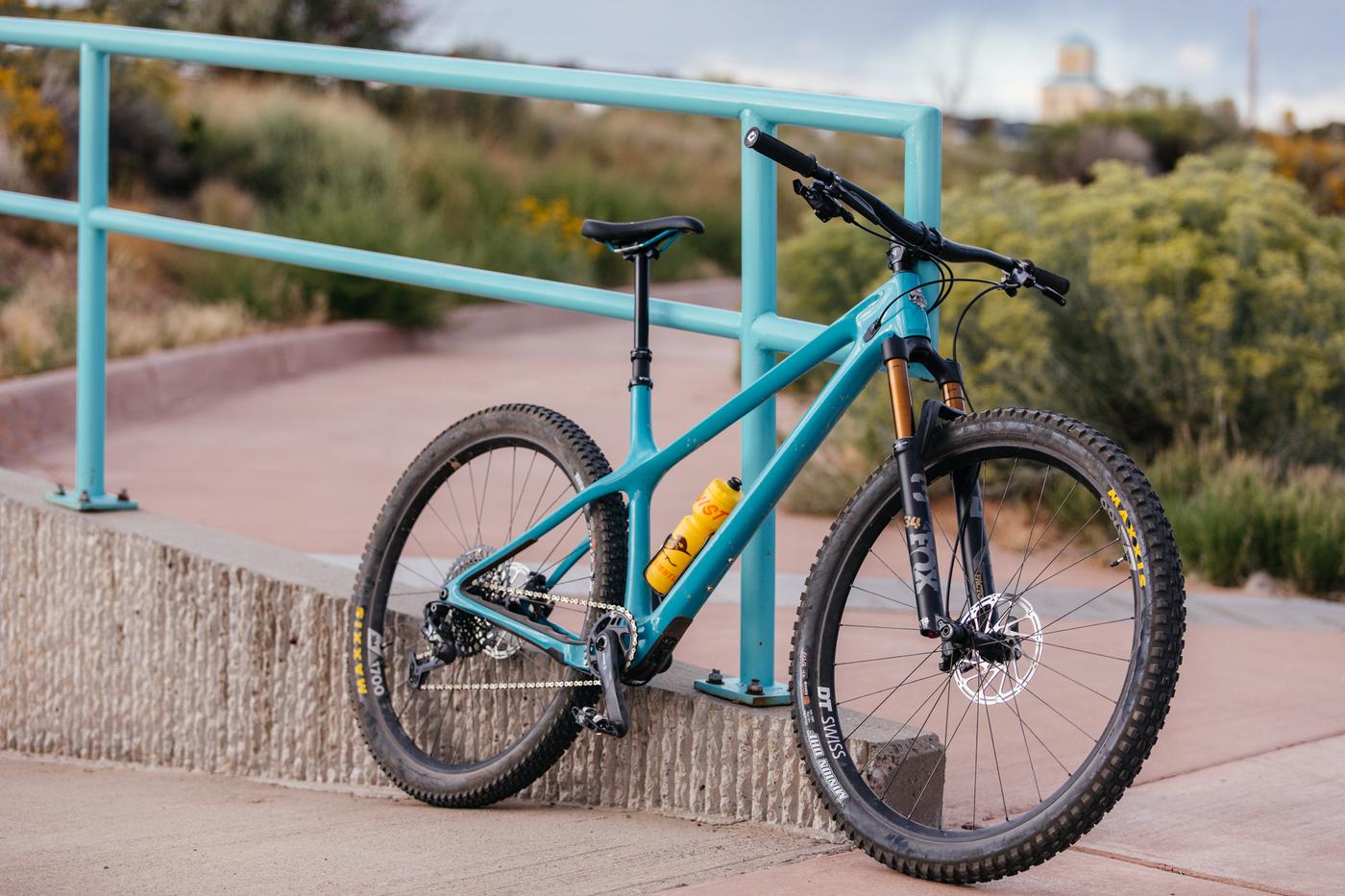 Hardtails are simple machines – albeit not as simple as a singlespeed rigid – but simple nonetheless and any cyclist can appreciate them. It’s great to see Yeti throw their helmet in the ring and design a bike that has the stance, the geometry, and the spec of a true trail ally within the brand’s catalog. Personally, I just wish it had room for two bottles in the front triangle. Not everyone wants to wear a pack all the time.

This bike is more than meets the eye, a joy to ride, is lightweight, and looks damn good, especially here in the Southwest. Within the market, it’s competitively priced, and the maintenance will be much less than its big bike siblings.

The modern ARC is more than a throwback to the brand’s roots of building lightweight aluminum XC frames, it’s a completely new point of departure and that’s ok.

I reviewed the size XL in the middle tier of three build specs, the T2 TURQ, which is priced at $5,700 and weighed 26lbs on the nose as documented here with XT pedals and one bottle cage. Yes, the ARC also comes in black.