I have been riding for close to a decade and have never been able to wrap my head around the connection between frame geometry and gender. A bike seat, of course. But the frame? A frame is related to body proportions, leg length, arm reach, and the like; not our reproductive organs. Anecdotally, swap out my bike seat and my brother and I could comfortably ride the same bike. So what is the industry telling us? That I am built like a man? That my brother is built like a woman? The conversation quickly spirals into uncomfortable territory. But with the launch of the new S-Works Tarmac by Specialized, tides appear to be changing in a very positive way. This year, Specialized’s product teams have poured into fit data to design and manufacture non-gendered frame geometry. In an industry where attaching patronizing qualifiers, like “specific”, to women’s gear has become commonplace, this new approach marks big progress for all the women cyclists out there who desire best-in-class gear alongside their male counterparts. It’s a giant step towards no longer treating women as if their gender is an impediment that needs to be designed around.

I have had strong feelings about this subject for some time now, so when I met Stephanie Kaplan of Specialized, a woman who has tenacity and passion in spades, and found out she spearheaded research for a non-gendered Tarmac design, I thought my brain might explode. We met at an industry event and it didn’t take long, one dinner and two glasses of wine to be exact before we decided a collaboration was in order. Enter Kayla Clarot, the most sought-after painter at Specialized, along with the latest Machines For Freedom “Fruits” print, and the result is a bike that leaves me breathless. The subtle layers of iridescent blue have a sophistication and depth that I have never seen executed on a bike before. Hits of gold flake on the seat tube inscribed with the words, “Spread Good Vibes”, add a playful punch to an otherwise sleek, and dare I say sexy, vibe. 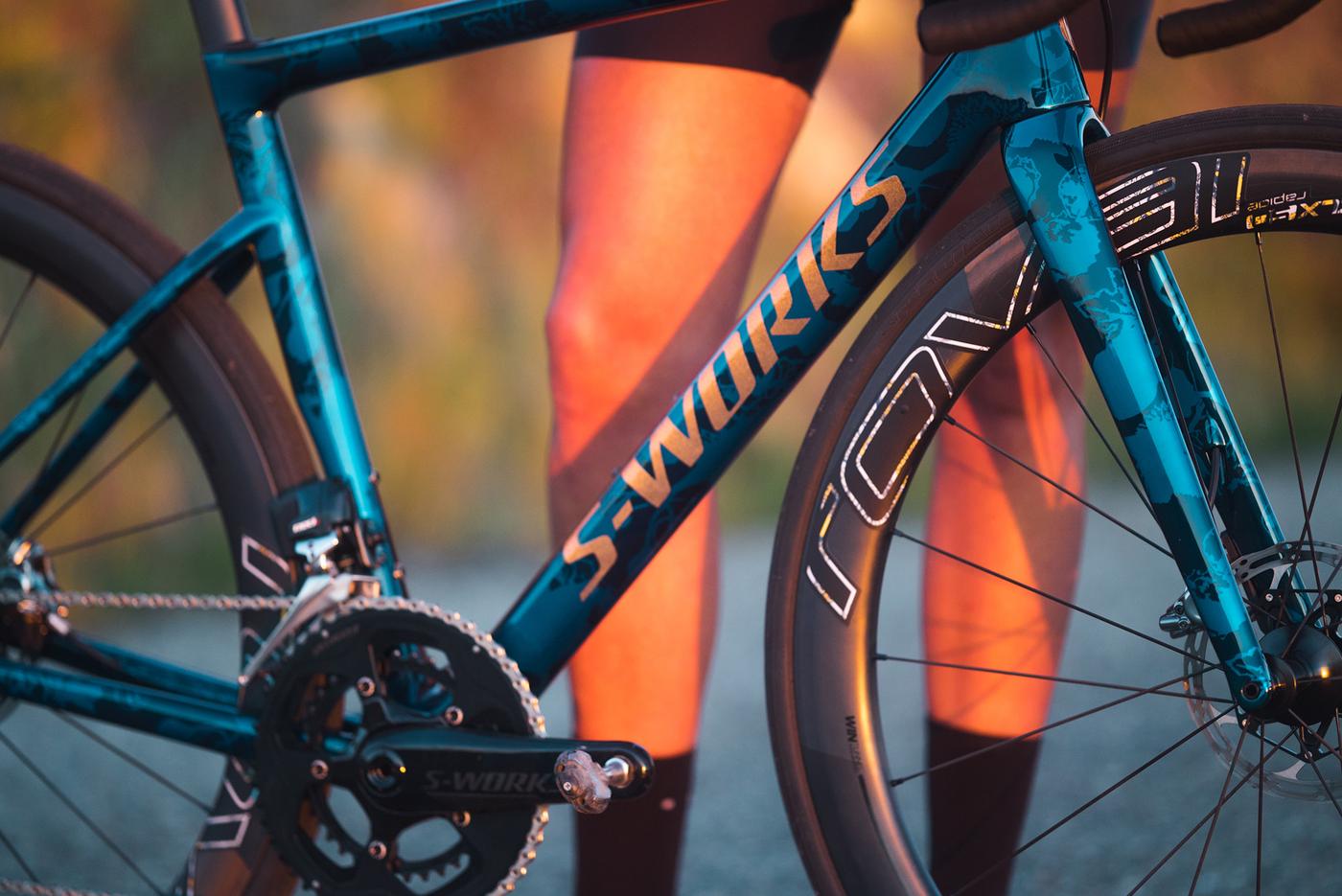 The S-Works logos are done in reflective black making them virtually unnoticed until they are hit with light; a level of modesty and grace that I strive for in both design and in life. And then there’s a surprise, the original “Fruits” print hand-painted under the seat as a reminder of where this incredible design began. When I first laid eyes on this bike I was mesmerized by the chameleon-like paint as it changed from shades of blue found in the deepest depths of the ocean, to the vivid turquoise ombré found in the Caribbean Sea. The effect was magical. Then there are the guts of the bike, which exceeds all expectations. The ride is light and responsive. SRAM Red eTap shifting. Hydraulic disc brakes. Every interaction filled with the same smoothness that the aesthetics represent. And finally, a “women’s” bike from a major brand that is every bit equal to the men’s. A much-needed shift in perspective that I hope is here to stay.