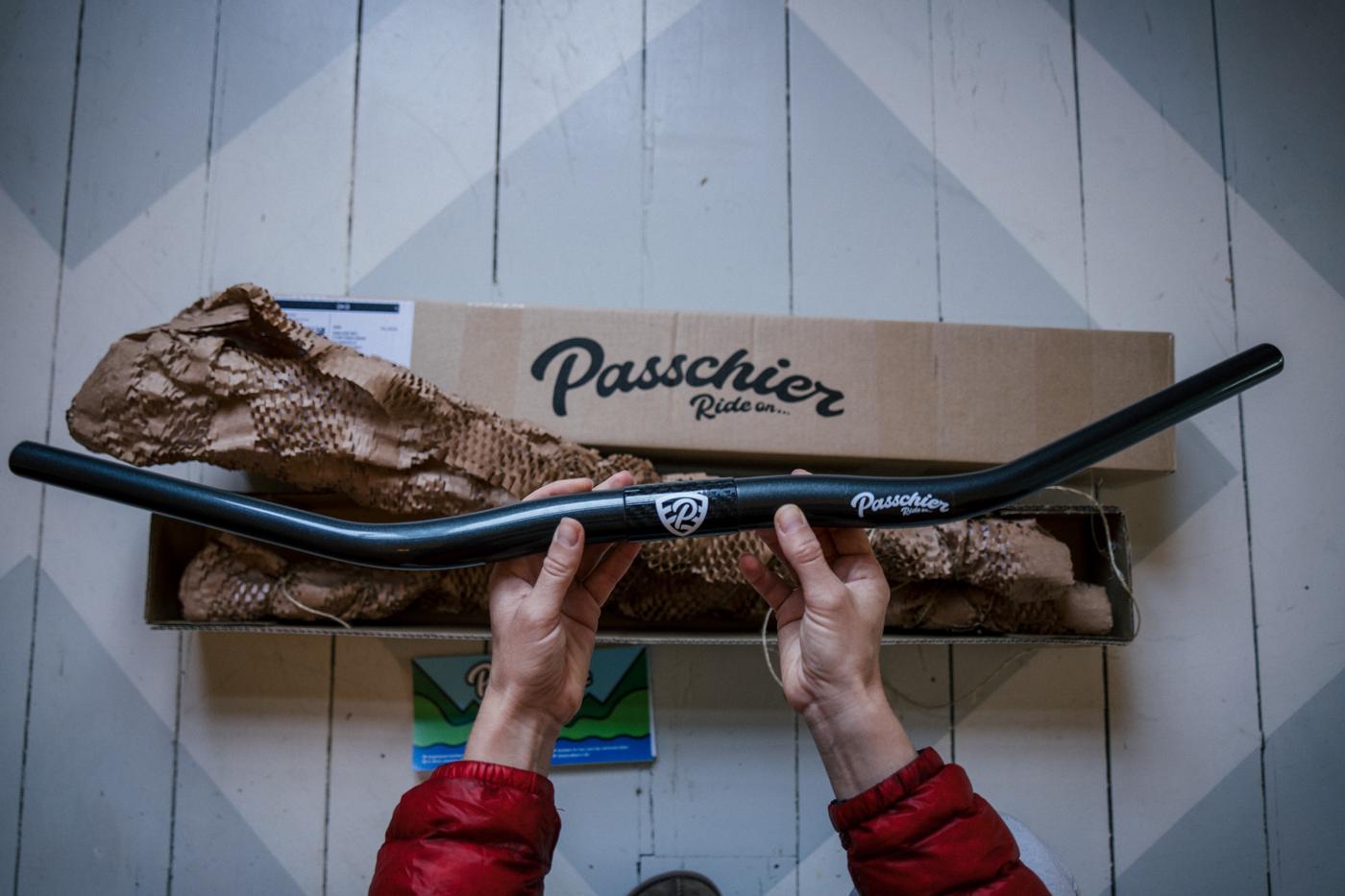 We’re living in the golden age of handlebar comfort. Never before have we seen such diversity, originality, or inclusivity for riders as right now. For a lucky few, long days behind an ultra-wide curly bar is analogous to lounging in their favourite La-Z-Boy. For others, a backswept alt-bar with more hand positions than the kama sutra offers the perfect perch to grind out those backcountry miles. But for so many riders, comfort on a long ride is still a thing of legend and fairy tales. With the laminated bamboo Gump handlebars, however, Passchier of New Zealand claims to have found the key to both comfort and performance. 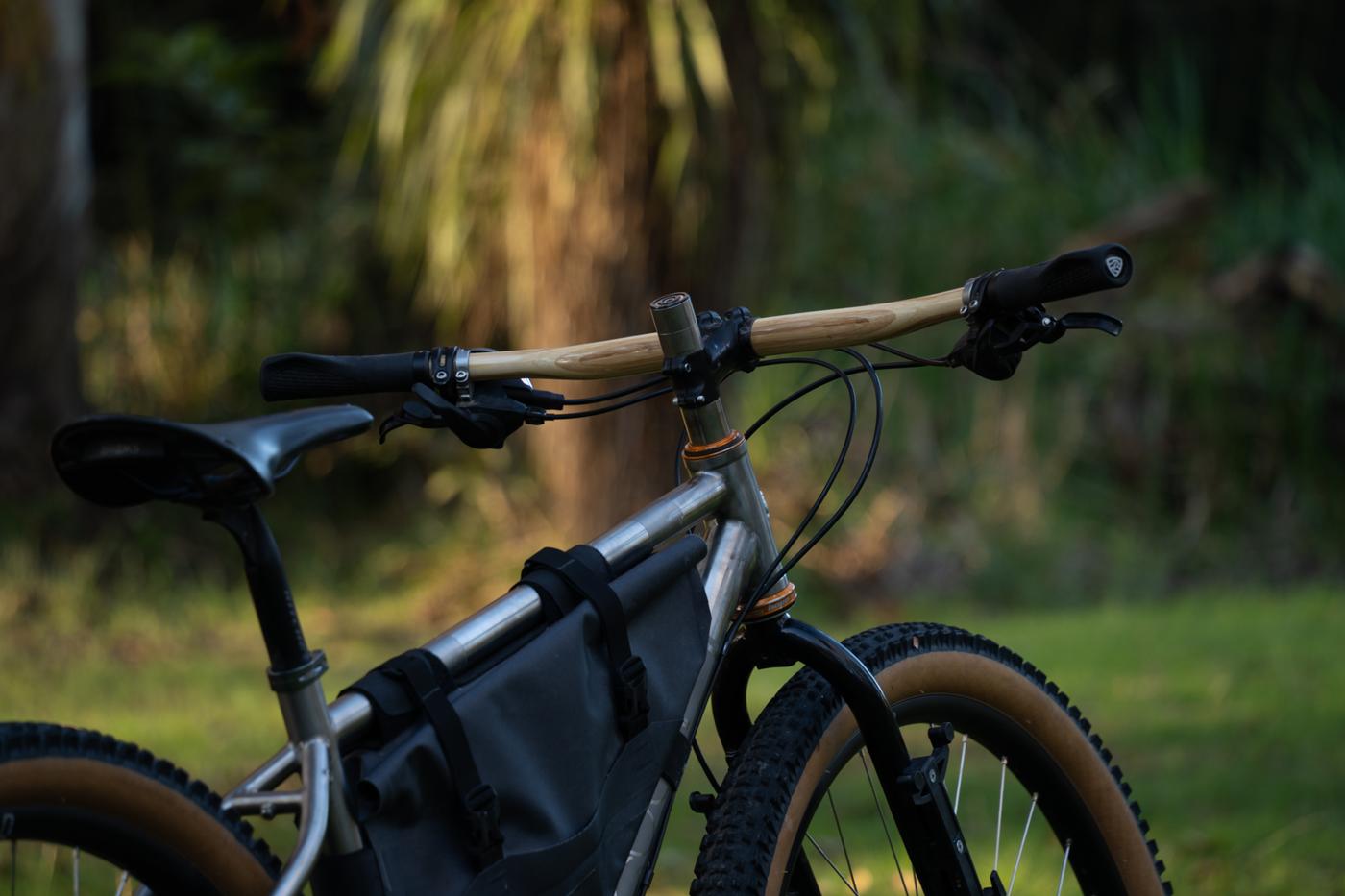 Plagued by hand numbness, sore wrists and shoulder pain, what should be a relaxing and enjoyable ride often becomes a living nightmare. Arm pump or hand-arm vibration syndrome is caused when harsh vibrations, undamped by suspension, tyre suppleness or handlebars, penetrate our hands and arms causing discomfort, pain and in some cases nerve damage. As a 6ft 1, 80kg long-distance bikepacker and gravel junkie, my personal flavour of arm pump comes in the form of heavy fatigue in the hands and fingers, often causing me to lose grip strength and the ability to squeeze my brakes hard – which isn’t ideal. Bec, my partner in crime, experiences pain in her neck and shoulders, especially after chucking her bike down technical trails fully loaded. So we were both excited to try the new laminated bamboo handlebars from the minds at Passchier (pronounced pash-air). Aimed at comfort-conscious bikepackers, gravel riders and commuters alike, the Gump bars (available in two sizes, 650mm & 760mm) claim to take the sting out of rugged terrain thanks to the natural vibration absorption and flex of bamboo.

To put that theory to the test, we spent four months putting them through the wringer on the rough gravel tracks of New Zealand’s South Island. In this review, we’ll break down what we did and didn’t like about the bars and ultimately answer the million-dollar question: do they live up to the comfort promise, or is it just marketing bamboo-zle?

Founder and craftsman Dirk Passchier built his expertise working with bamboo by making kayak paddles. Frustrated with the lack of comfortable kevlar paddles in the market, he started experimenting with bamboo forty years ago. A few decades later, Dirk met co-founder Mike Baddeley, an avid cyclist, and together they set out to solve the same ergonomic challenges – but for bikes. 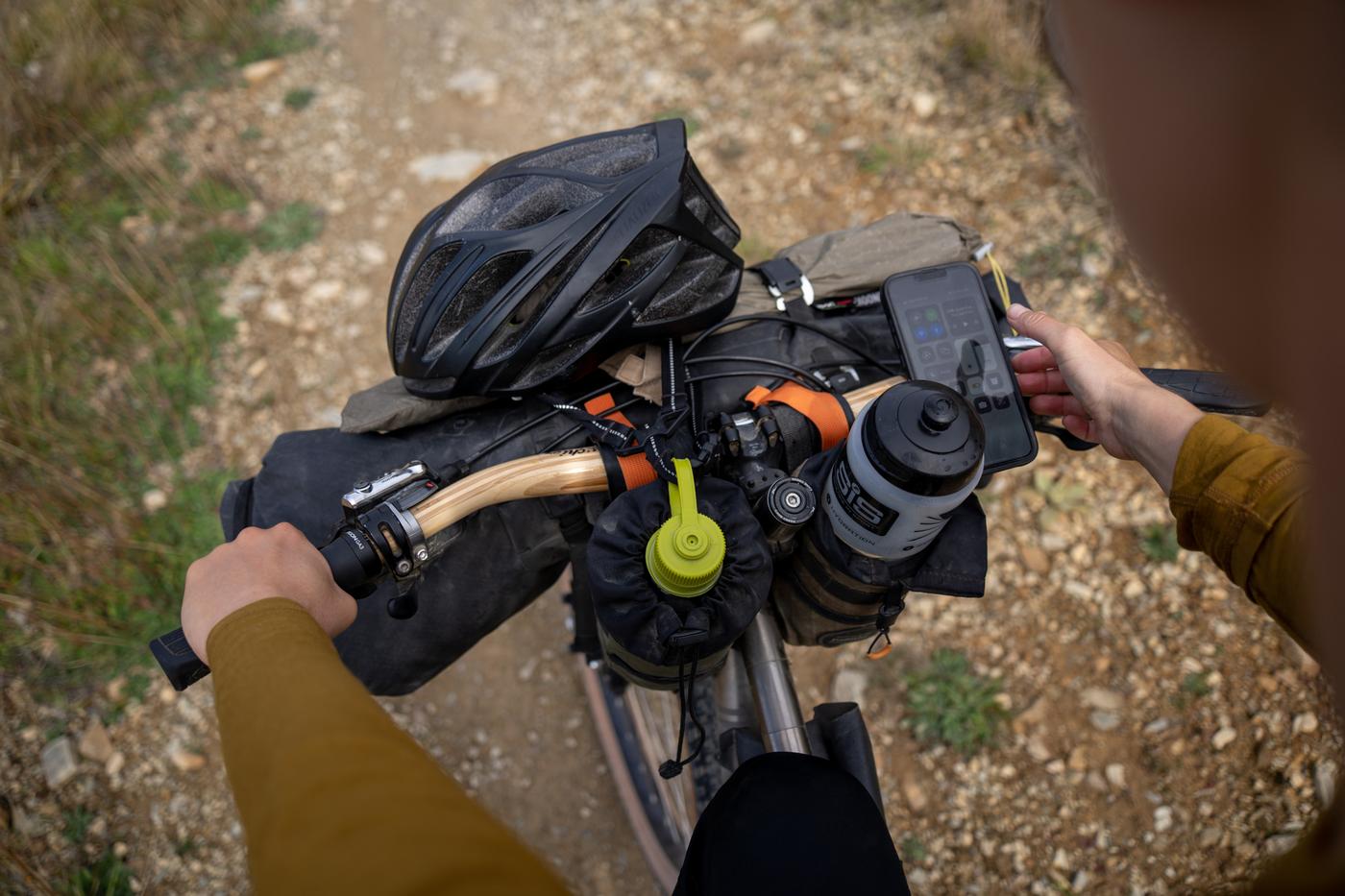 To be honest, we were both unsure about how we’d get on with the bars in the lead up to their arrival. We travel fully loaded, often in remote places and with a bunch of expensive technology, so the prospect of a bar snapping in the middle of nowhere could cost us more than just a faceplant in the dirt.

But, straight out of the box, we were pleasantly surprised with the Gump 760s. They have a real premium feeling and immediately you can tell they’ve been hand-crafted with an elegance and finesse you wouldn’t normally associate with a handlebar. We really dig the “natural” colour with the earthy wood grain that flows through the bar, but also tried the black colour (dubbed “Jenny”) for a more stealth look on my bike. 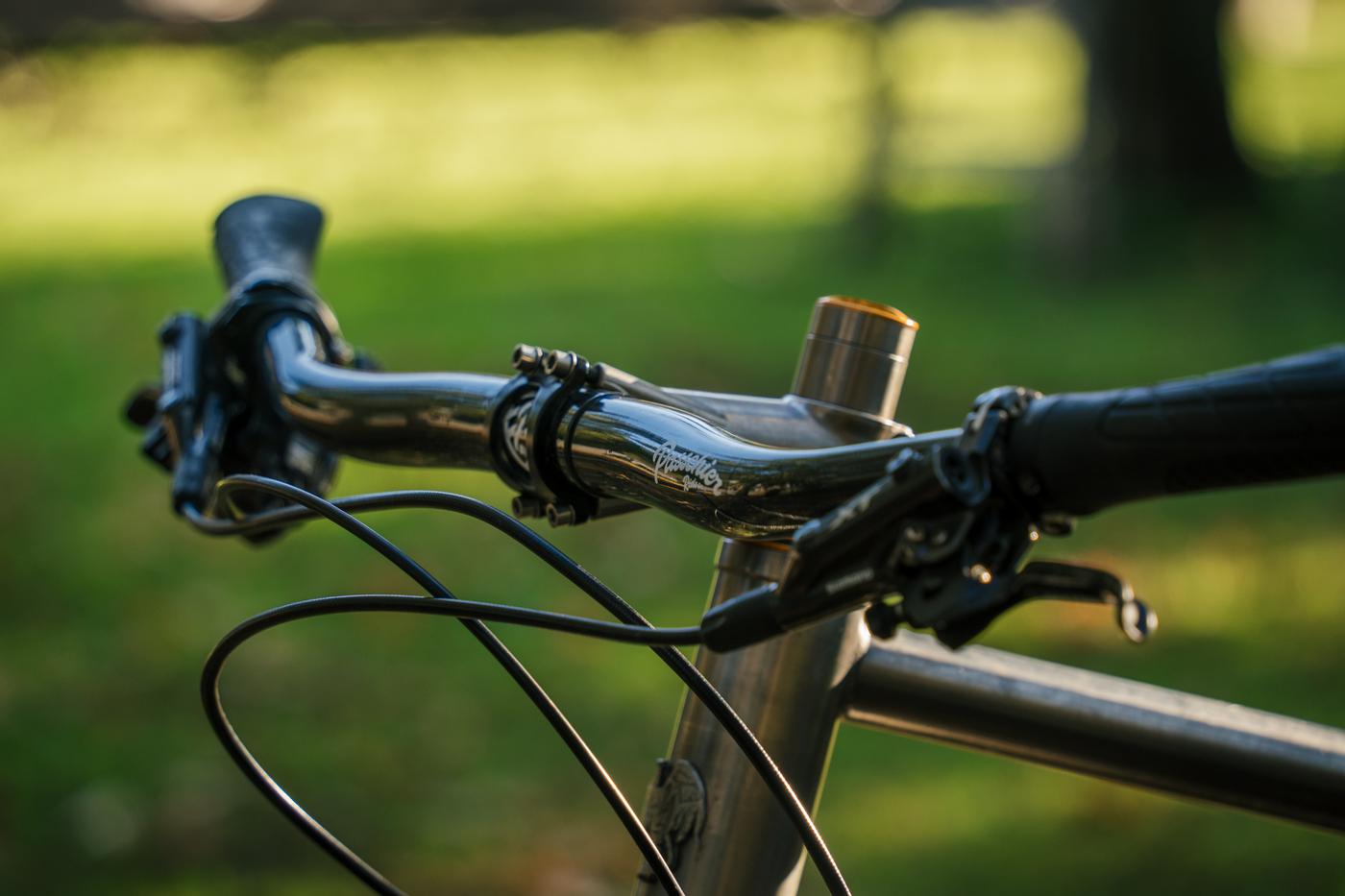 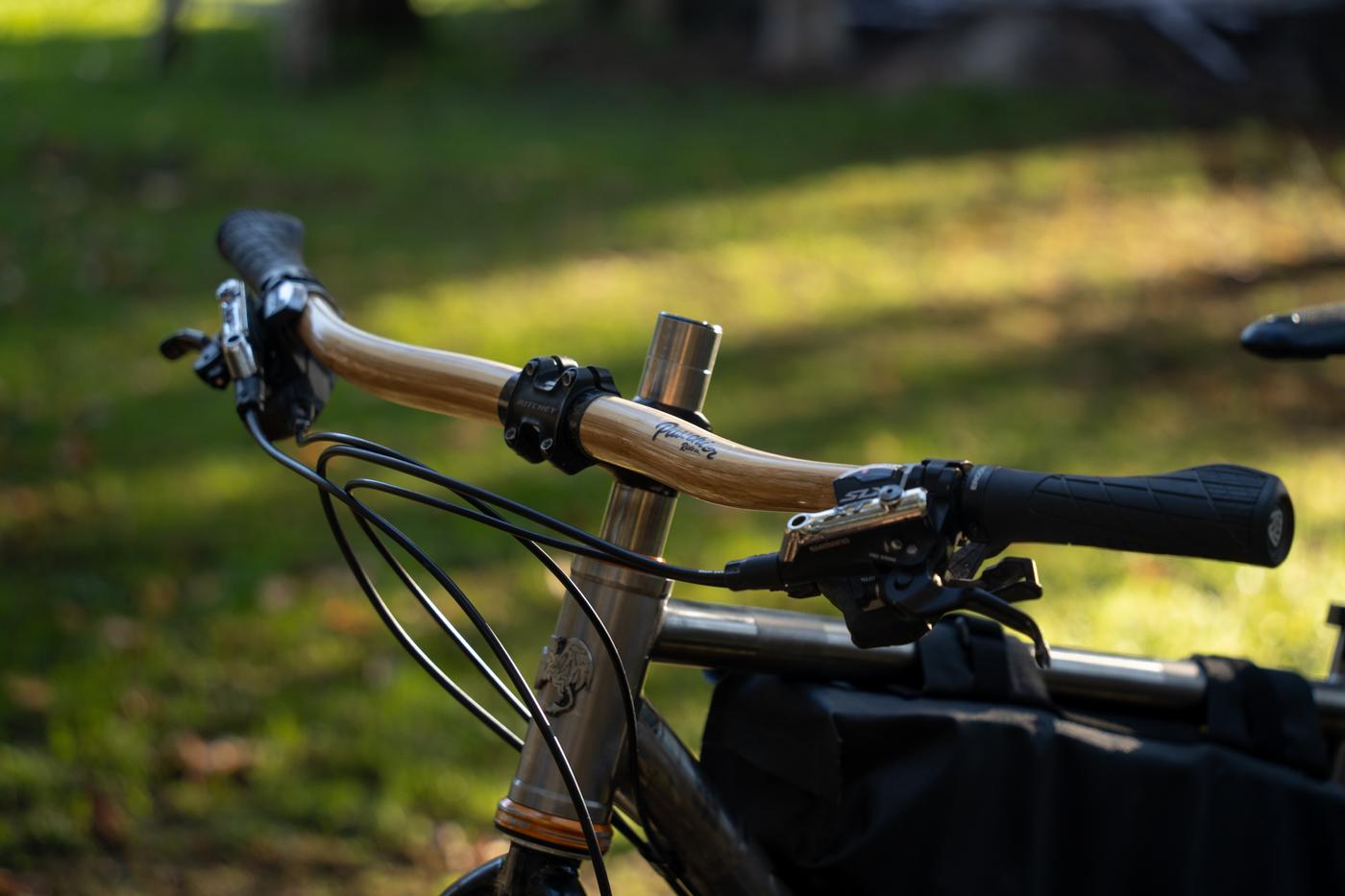 Aesthetics aside, the main surprise for us was the weight (or lack thereof!). Given that they’re crafted from a solid structure, rather than a hollow tube like most bars, they’re surprisingly light – ours come in at 328g on the scales. Compared to our aluminium Jones bars at 625g that’s a near 300g weight saving. Widthwise, the Gumps (pictured here) are 760mm wide (we’d prefer them to be a little wider). Back-sweep is a comfortable 22 degrees, the rise is zero and they fit a 31.8mm stem which clamps onto a carbon-reinforced centre section. Overall, the bars put us in a natural position and when paired with the Ergon GA3 grips, felt super comfy! 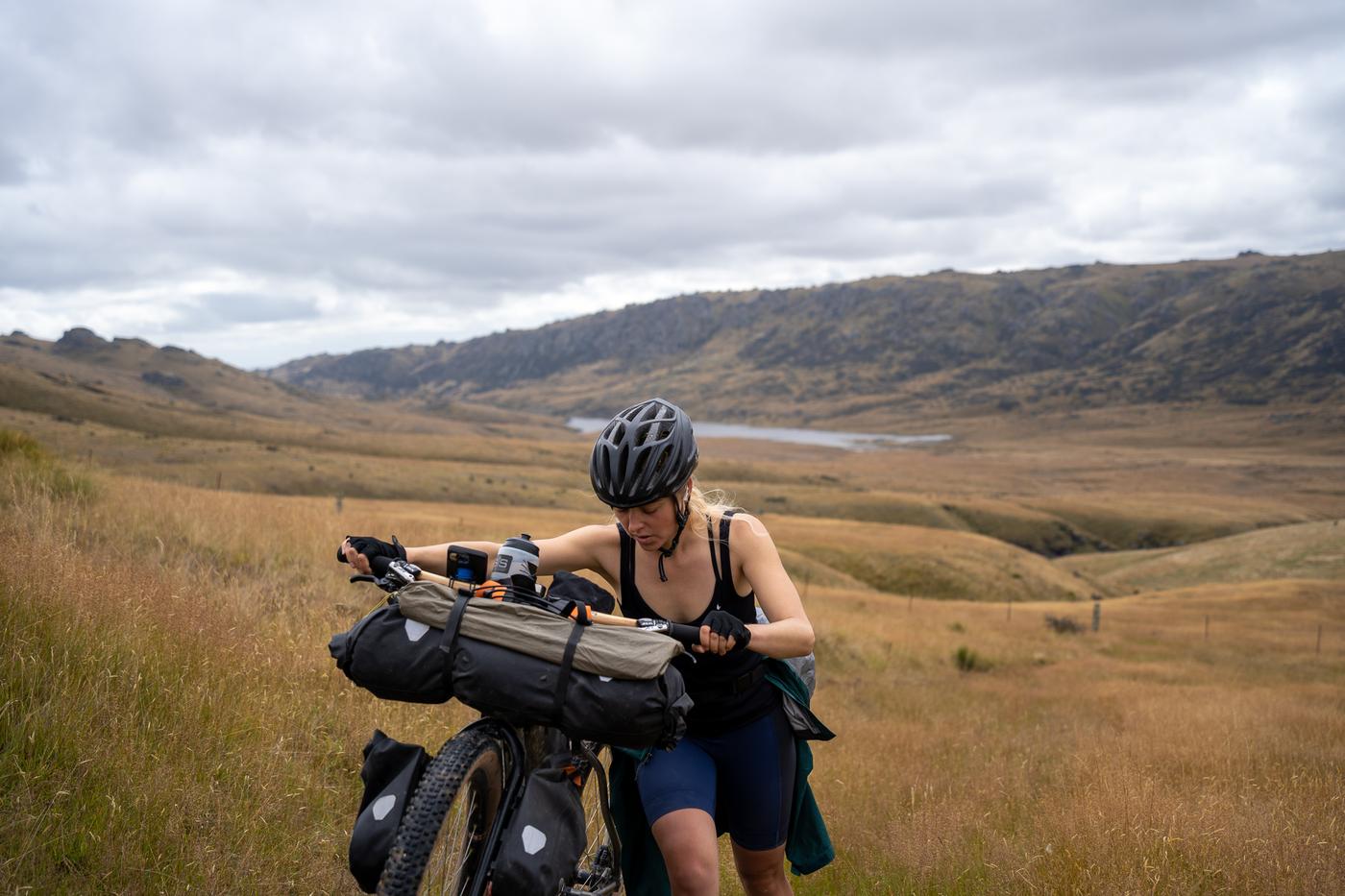 Once fitted, leaning on the bars reveals a noticeable degree of flex and movement. It’s apparent, but not dissimilar to flexy carbon bars I’ve used in the past with an asymmetric layup. But as soon as you hit the rough stuff, the similarity to carbon ends.

The corrugated gravel roads and pothole-laden 4×4 tracks that New Zealand is famous for immediately felt different. The usual bar-buzz was almost entirely removed and even when we strayed away from the gravel and hit up some rocky singletrack, the Gump’s ability to filter out the noise of the terrain was extremely impressive. It’s kinda like when you put your Airpods into noise-cancelling mode… dreamy! 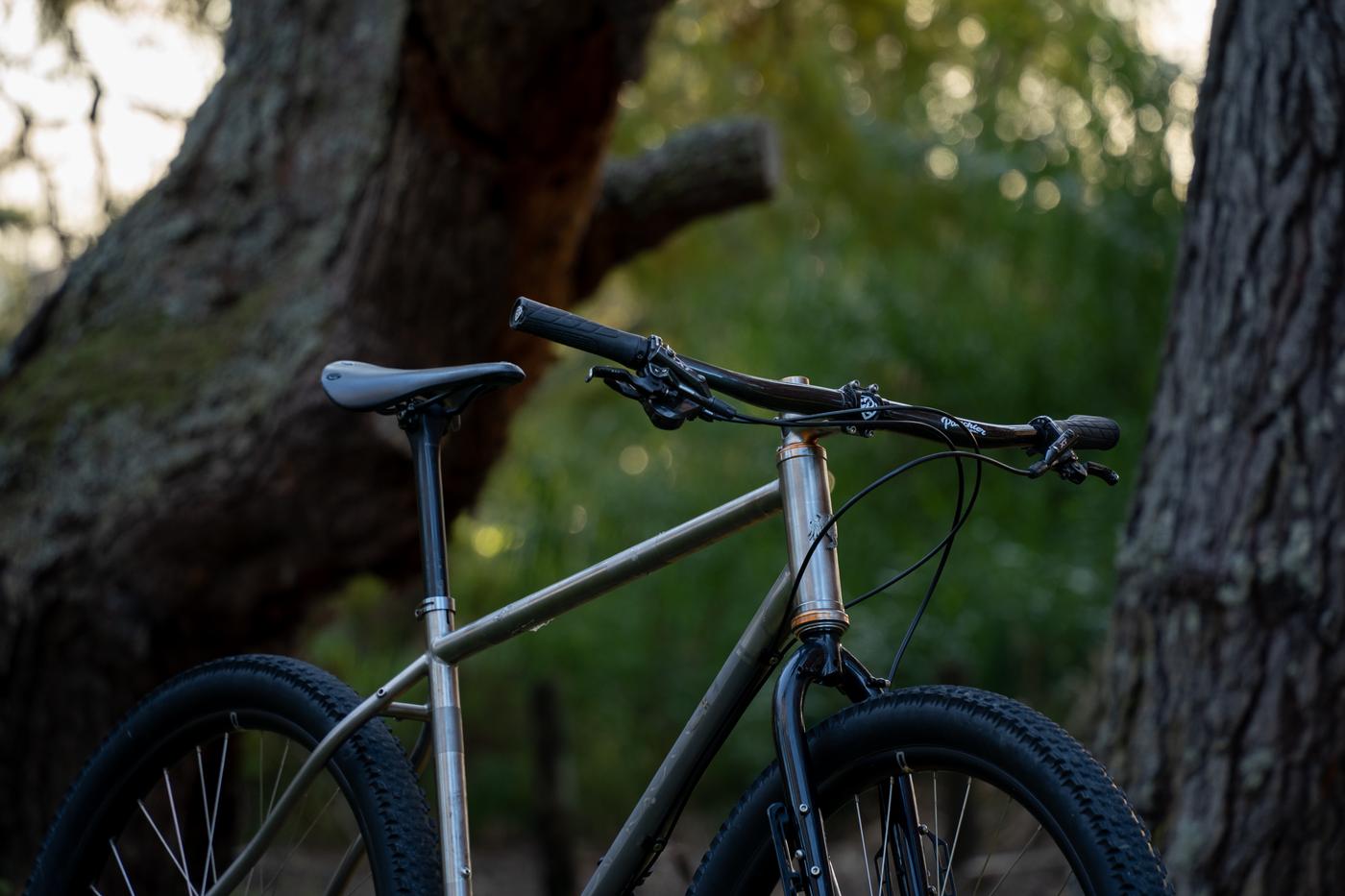 But in our opinion, where these bars truly shine is in the flex – adding an almost suspension-esque feeling to our bone-rattlingly rigid touring bikes. Interestingly for us, the flex didn’t impede our bike handling whatsoever. Even in tight, technical corners, the bikes felt sure-footed and stable, but with a sense of pliancy and spring. Can they replace suspension? No! But, chuck a pair on your rigid bike along with some plus-sized tyres, wide rims and some comfy grips, and you’ll be basking in the kingdom of suppleness with a giant smile on your face.

However, as good as the flex is at dampening the chonk, where we didn’t enjoy the flex was on the tough, out the saddle climbs. When loaded down with all our gear, climbing up loose gravel felt more energy-sapping than usual and often left us craving for a bit more stiffness in the bar. Is it a deal-breaker for us? No. We feel the comfort outweighs the performance hit. 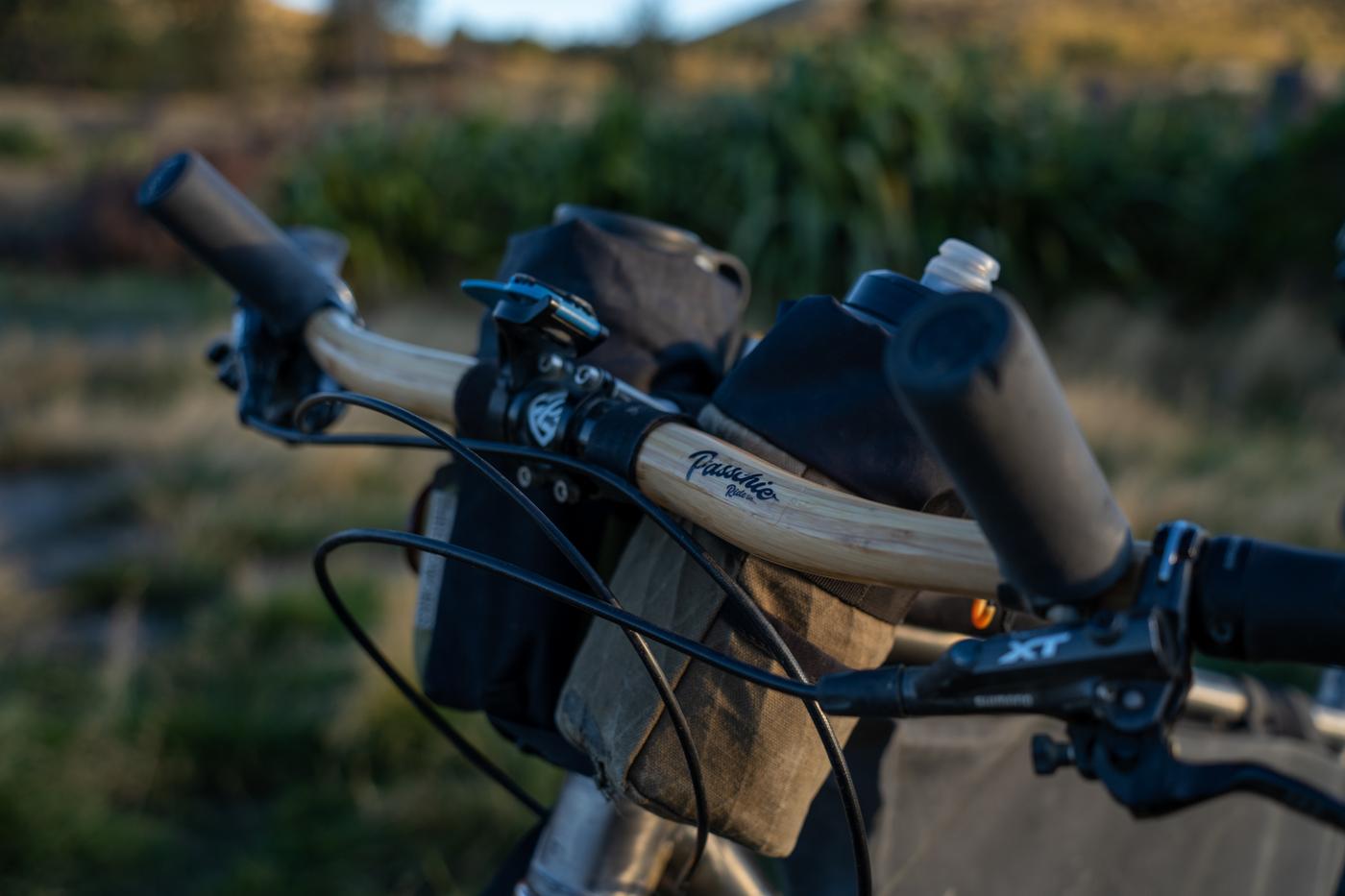 The Elephant in the Room

By now you’ve probably thought to yourself, “There’s no way the same material used to make eco-toothbrushes and take-out chopsticks can be strong enough to keep my face from the dirt?” Believe me, friend, we thought the same thing…

But it turns out that as a natural composite, bamboo is damn strong. How strong? Well, according to folks at Interesting Engineering, it’s even stronger than steel, measuring in with a tensile strength rating of 28,000 pounds per square inch, vs steel at a measly 23,000 pounds. Passchier then builds on this natural tensile strength by layering 11, 3mm thick sheets of bamboo on top of one another before glueing, pressing, and laminating them to achieve their final form. 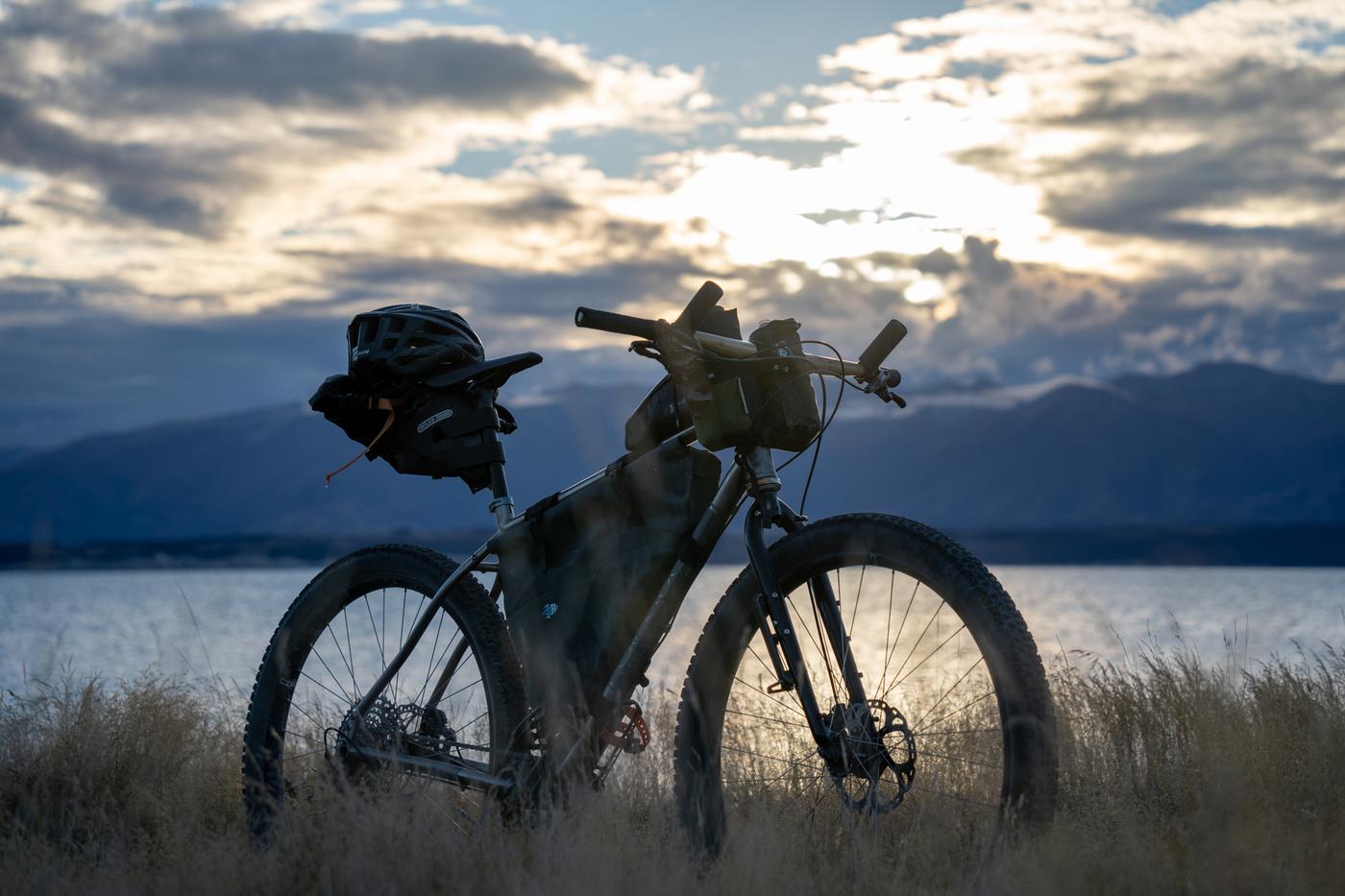 The result is a rigorously tested and ISO fatigue and strength certified bar that the company claims is suitable for “all possible urban, trekking and trail settings.” Each design goes through a gruelling five days of stress testing, including 100,000 cycles of 50kg force to achieve its ISO rating. However, they aren’t rated for aggressive downhill riding or for large riders who tip the scales over 110kg as stated on their website. So, if you’re predominantly riding gravel, forest roads or commuting around cities, you’ll be sweet. However, if you regularly ride aggressive mountain bike trails, the Gumps are 100% not for you and you should look at another bar.

In the four months we’ve been using our Gumps, we’ve covered roughly 1000km and ridden some pretty rowdy terrain. We haven’t experienced any strength problems whatsoever and feel confident taking them on future long trips. 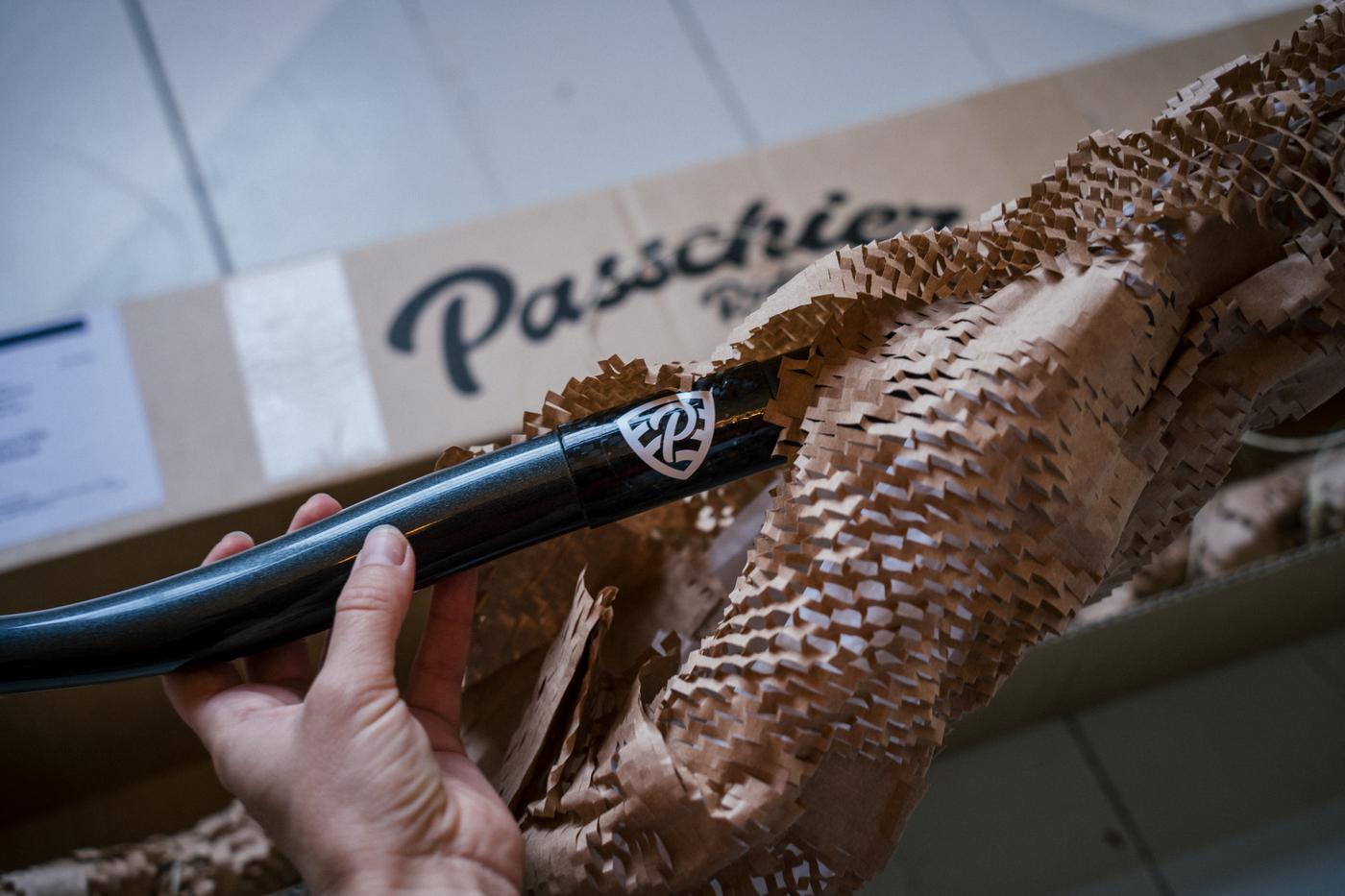 If you’re looking for a lightweight, beautiful and ultra-comfy bar to ride on gravel, forest road, light singletrack and around the city, the Passchier Gumps are a real treat. At NZ 350 (USD 225) they’re not cheap, but for a unique, sustainable and hand-crafted product that has the potential to rid you of your arm pump woes, we think they’re worth it. Finally, if you’re looking for a performance bar that’ll help you convert every watt of power into forward motion, the Gumps are not it, and you’re probably better off with a stiffer composite like alloy, titanium or carbon.