BCN views with the unfinished Sacrada Familía rising from the cityscape. 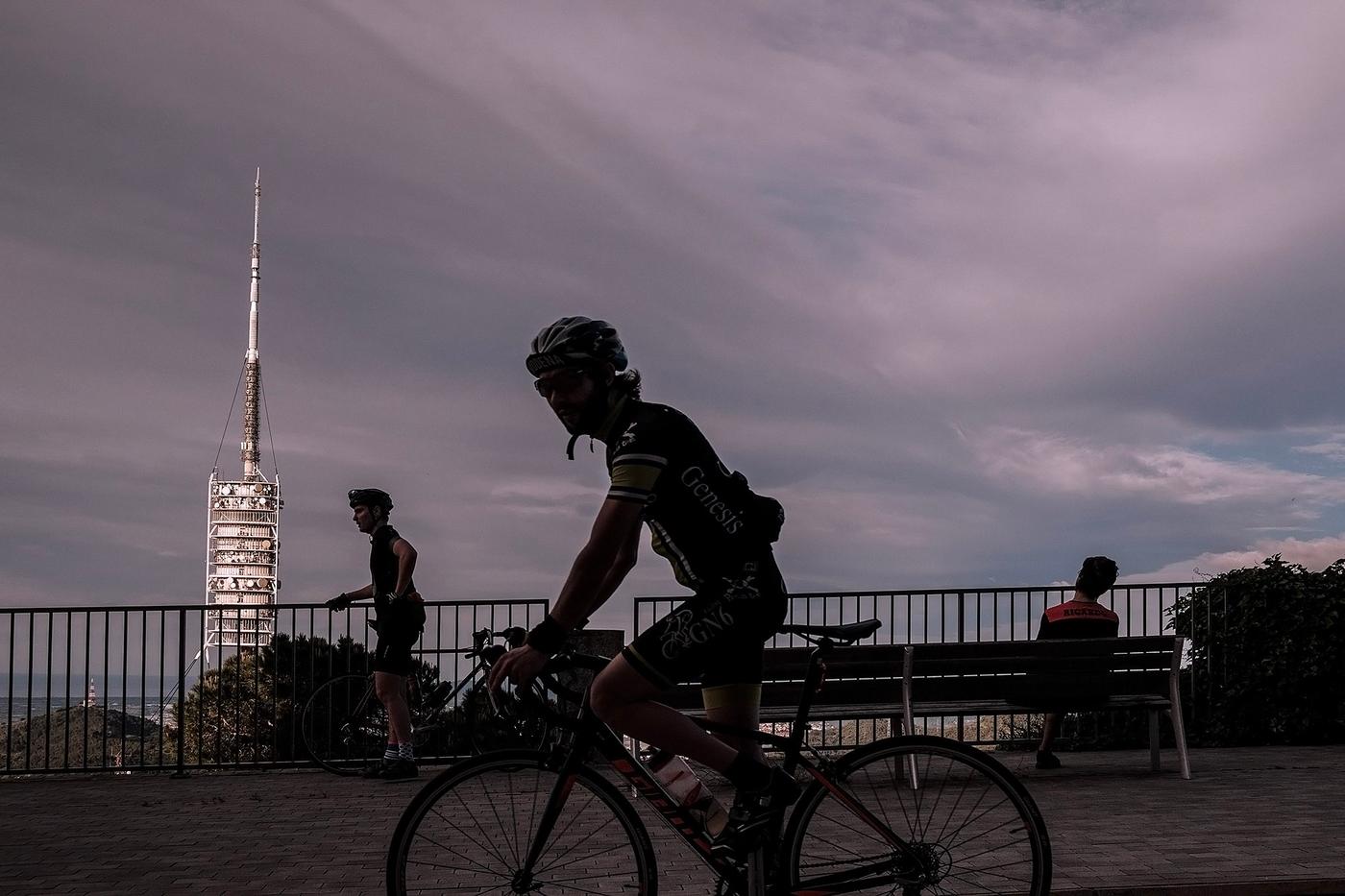 I’m taking a page from my father’s book tonight. My cycling kit, shoes and camera gear is neatly piled next to my bicycle. It’s as if Santa has delivered these presents for some nice little boy, who will eagerly awake the next morning and find them. But tomorrow the alarm will go off at 5:30 in the morning on May 2nd. It won’t be Christmas Day, but for myself and the other five and a half million people in Barcelona, Spain, it might as well be. After 50 days of official lockdown, we will finally be “gifted” the opportunity to go out in public once again.

Still, our activity will be restricted. This is only the first phase in de-escalating the lockdown. Recreation will be permitted four hours in the morning from 6 a.m. to 10 a.m. and three hours from 8 p.m. to 11 p.m. We also have to remain in the municipality where we live. No traveling to play.

For the last seven weeks, we have only been allowed to leave the house for the grocery shop. No exercise. No drinks. No friends except the ones we may have been lucky enough to live with. During those lockdown days, I had dreamt about the routes I wanted to take, the hidden trails to escape to, the lines on the GPS to follow. I had stared at virtual maps longing to actually ride on those roads. Even just a simple pedal along the usual routes would have brought so much joy.

And now, after months of waiting, it is finally here. The sun is not out yet, but it’s nearly the time for the roosters to crow. Yet as walk out the front door, I already feel that this first day back outside will not be as idyllic as I’ve built it up to be. But there’s no going back, I have committed to document the experience for a publication, so out the door I go.

People flow out their front doors, in exercise outfits or riding bikes, meandering toward the principal streets. Each ally and calle is a tributary that feeds more people to the larger thoroughfare. This watershed is odd though. It runs uphill, toward the mountains above the city. I join them, going with the unnatural flow.

As I predicted, most Barcelonans climb towards Collserola, the green heart of the metropolitan region that rises from the city. Heading toward Torre Baró, I bump into a long line of cyclists. They are of all ages, disciplines and physical conditions. The climb is gradual and good asphalt. The sun rises directly in my eyes, and I look off to the right, toward the center of Barcelona backed by the Mediterranean Sea.

I can’t get too lost in the vista though. There are swarms of people in front and behind me. I weave from one side of the road to the other, trying to respect the safe distance of two meters between people. I see no cars, so using the whole road seems to be the most suitable thing to do. No cars! It just dawns on me. I didn’t think about it until now. No car has crossed my path on the entire climb. I have been so focused on the other cyclists that I forgot about the metallic structures normally hurtling through Barcelona. What a joy to be able to forget about them!

I reach the top of the climb and decide to turn left and immerse myself in Collserola National Park’s. I leave the sun behind my back and ride gently towards Tibidabo, the highest point in the Serra de Collserola above Barcelona.

The city is down there, at my left. It’s quieter than normal, and it doesn’t wear its usual beret of pollution. The rest of the cyclists seem to notice this too. Many stop and take selfies, the photographer and vista like two old friends reunited after a long absence.

As the sun rises, so too do the number of cyclists. But bikers are not the only ones enjoying this returned freedom. Runners and walkers have finally made it up to the hills to look down on the city.

I head toward Carretera de l’ Arrabassada, and from there I begin to climb to the summit of Tibidabo. I had guessed that the city’s highpoint would attract some recreationalists, but I didn’t expect the throngs of cyclists flowing up the climb. The pedalers have replaced the typical car traffic. It feels like a dream. A place where there’s no room for motor vehicles. It’s surreal. 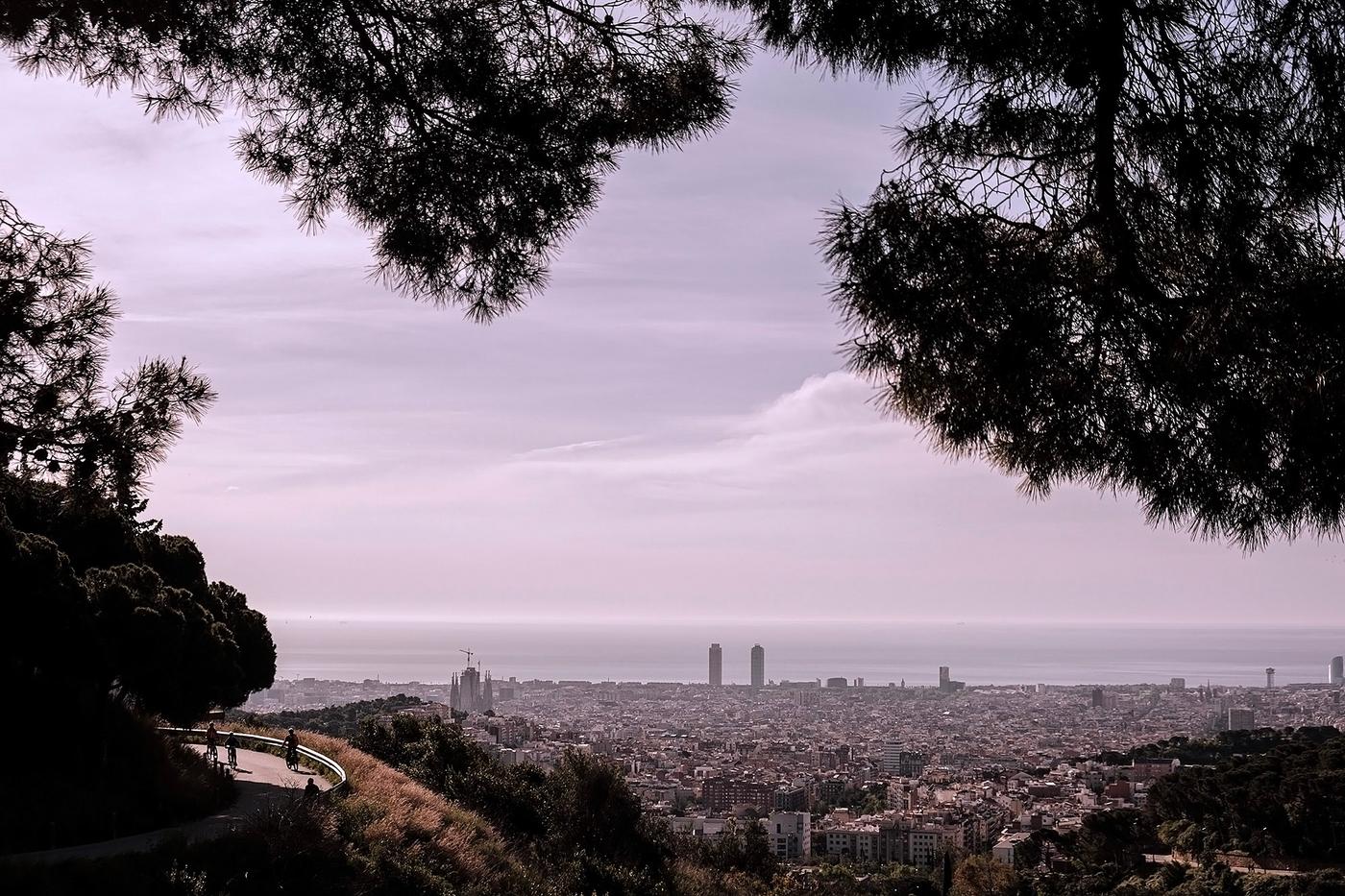 After snapping a few photos, I continue upward. I want to get to the to the top of Tibidabo, where a Christ the Redeemer statue and Giant Ferris Wheel stand side by side overlooking the city. As I keep climbing, I begin to think this is not a good idea. Some of the horde has already forgotten the basic physical distancing rules, and personal space is not respected as it should be.

I stop by one side of the road and exclaim out loud how quickly we have ignored the compulsory safety rules. Someone answers, ‘It’s impossible with so many people!” I think it’s a shame that no one seems inclined to travel a quieter busy route. It seems the most logical thing to do.

And that’s the option I take. I find an alternative, road through the neighborhoods to arrive to the top. It was easy enough, just not the old route of habit. I roll to Tibidabo’s basilica at peak hour. I see a few familiar faces. I snap some photos, and I decide to call it day. We are too many in the same spot. I don’t feel like carrying on like this. So, I head back down the mountain. Back home before we’re locked down once more at 10 a.m.

This story and photos were originally published in Spanish, on the VOLATA Magazine website.