A few years ago AE, the sole proprietor of Wildfire Undies, bartered her Surly Karate Monkey for pattern making lessons. She then left the bike industry and decided to make Wildfire Undies her main gig. She specializes in underwear fit for a femme body, but a new line will be dropping this fall. I stopped by for a tour of her shop/bike shed followed by a session at the dirt jumps. 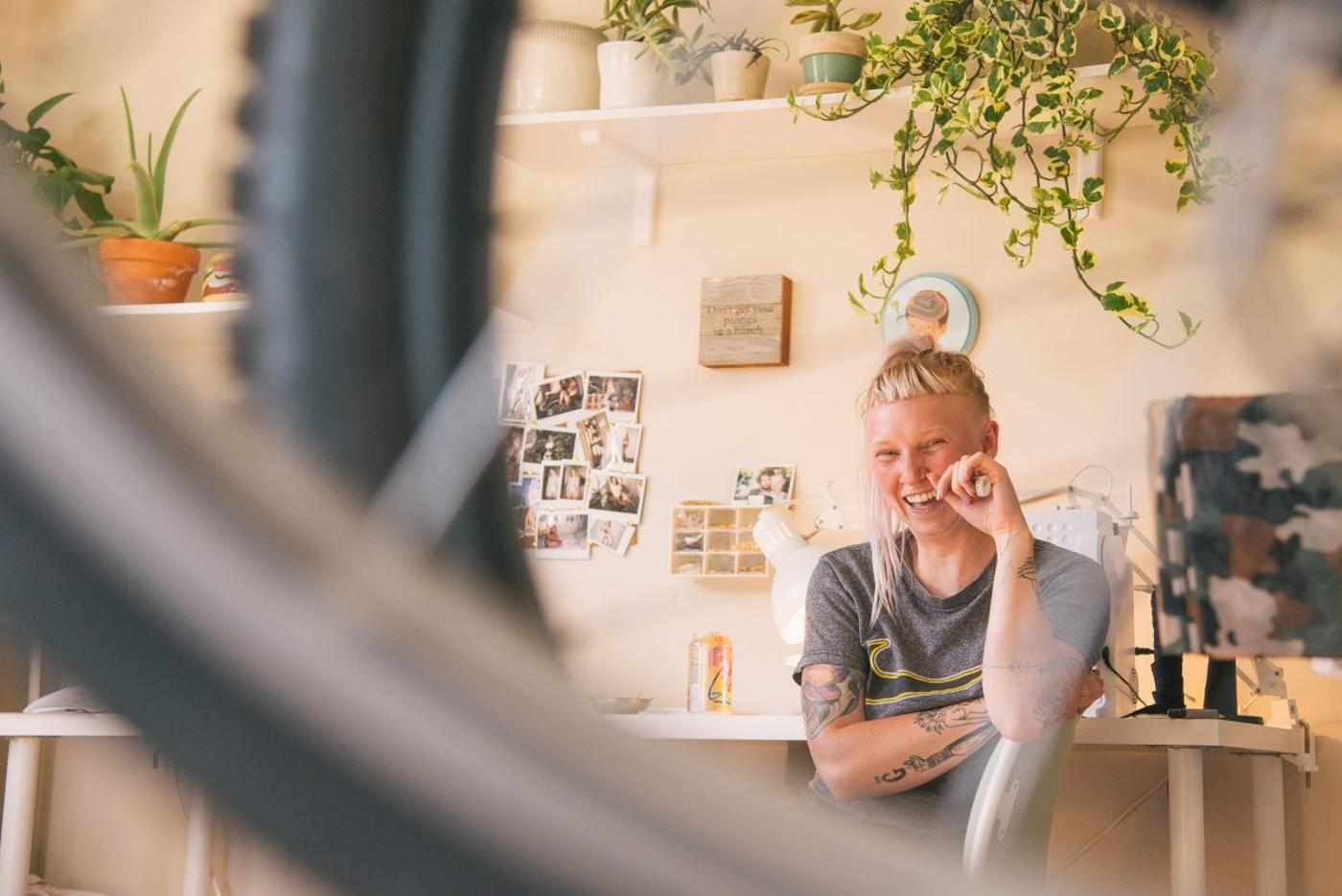 Why did you start wildfire undies?
I started WildFire because I’ve always known that I wanted to be a designer. I realized I wanted to be a lingerie designer when I began working for Elise Olson and she really taught me how to work specifically with lingerie, which I had never done before. She is also self taught and really encouraged me to go for it! Every mentor I’ve had has been self taught and I just didn’t realize I could do something completely on my own until they showed me the way. Thanks ladies!

Why did you leave the bike industry?
I left the industry because I was never allowed to be myself in it. I worked in a shop in Asheville that made me hate the industry. I was hired as the token female and didn’t realize it at the time. I would soon find out by being banned from the service area because I was “too distracting” to the mechanics, a lazy boss that watched everyone work and barked orders from dark corners of the shop, and then hired back a man that they were very aware had been sexually harassing me. I was going to work and having panic attacks everyday in the bathroom. I thought I could chalk it up to just landing in a terrible shop, but I was also surrounded by a community where being a bro was the only way to be accepted. The misogyny runs deep. Women there aren’t allowed to have their femme sides out and proud unless it means putting a tutu over your shorts for a bike ride every once in a while. I was so heartbroken that my home, which I thought was this amazing open, accepting place was totally the opposite in my adult life. Women supporting women there means something completely different. My character was attacked mostly by the women in that community. In contrast, there is little judgment and a lot of love in the small lingerie community I’m apart of.

Where do you draw inspiration?
I feel like I take inspiration from all the corners of my life, nature being the most influential. I think if someone asked, “Where do the bondage aspects come in with my designs?” It’s from vines and aroids and ferns and trails and trees and green and spring forever! But I’m a 90s kid (barely squeaked my birth into the 80s though) so nostalgia is huge for me (think 90s streetwear). But, above all else, comfort is what inspires me the most. How can I make something that looks sexy and makes you feel powerful while still being able to ride your bike or camp in it? 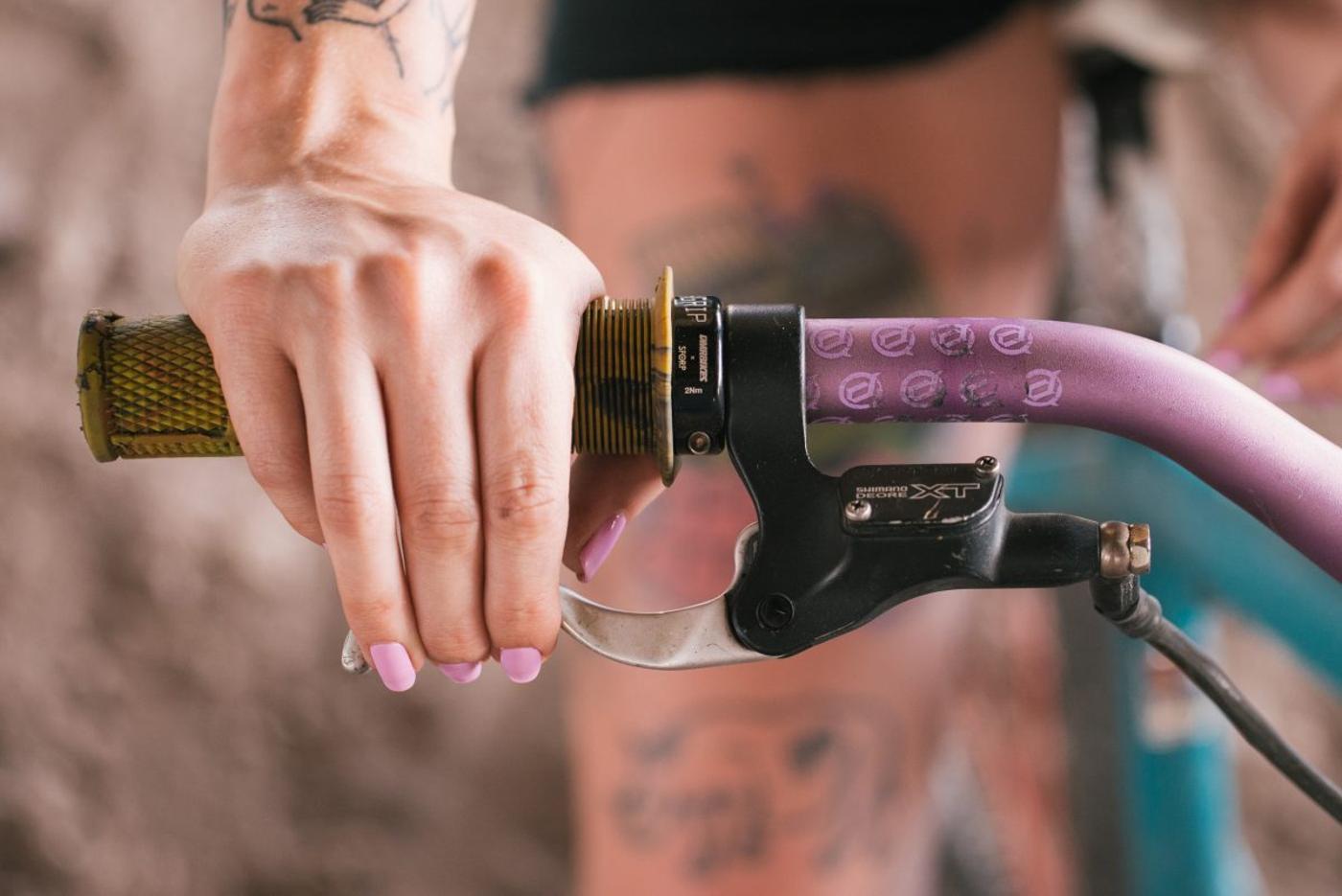 What can men who occupy spaces, like a bike park, do to make those spaces feel more safe?
Acknowledgment, space and DEFINITELY NOT OFFERING ANY COACHING TIPS!!!!! We’re just people who want to ride, too! I was at a skatepark today that felt so hostile. I showed up and was the only womxn (which is never surprising at this point), and didn’t feel like I was allowed to ride because all eyes were on me. So I stayed in my little corner to work on one little trick until a guy who could ride better than me slowly pushed me out of my little corner. So I left. Not feeling stoked. 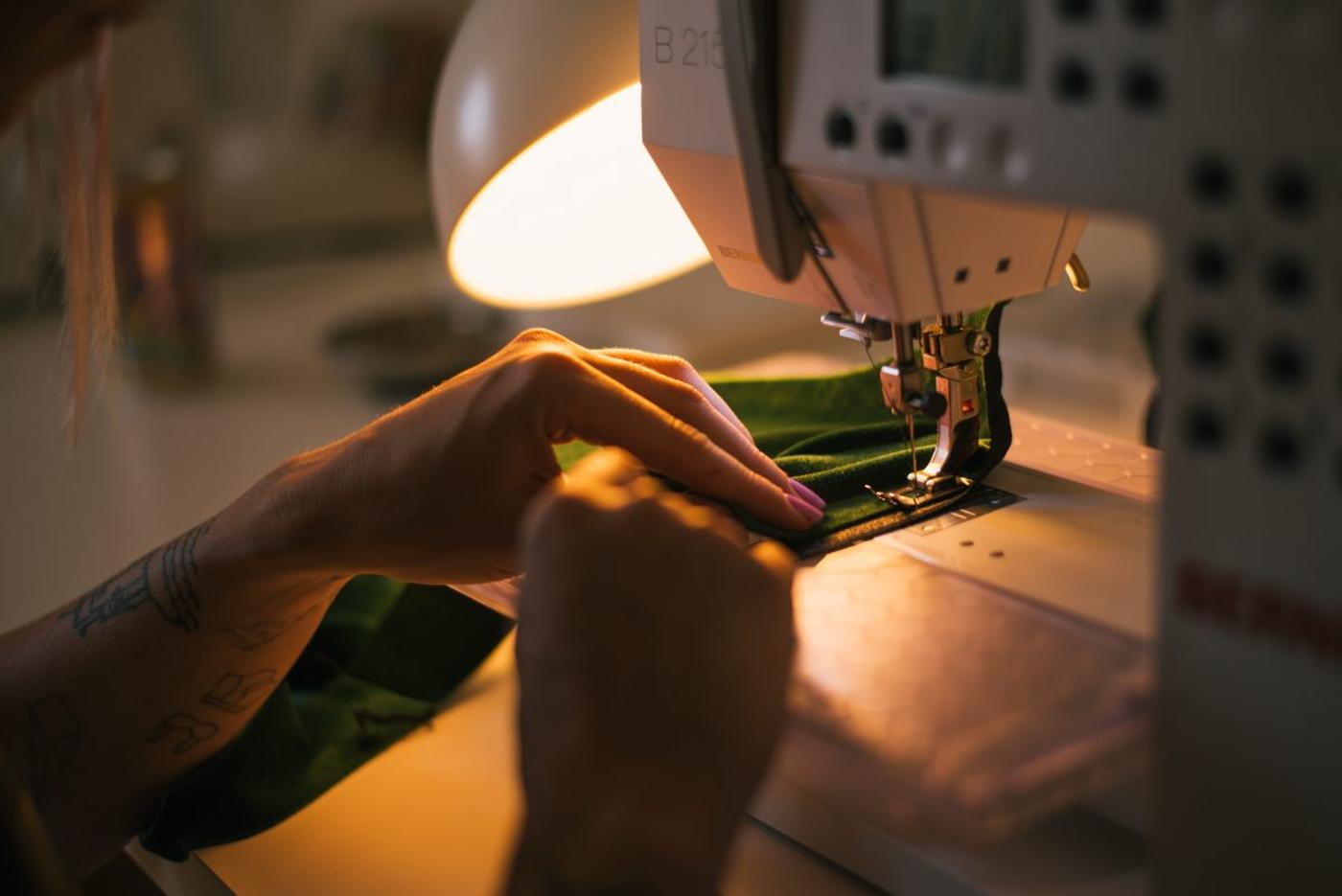 I remember you trying to start a sewing class for survivors, is that still happening?
I’m still working on a space. I was going to have them at my house but you’ve seen my studio. It’s hard working with two people in there on machines, let alone a group. I decided I would do it there, but just all hand sewing and put it off until I could get a fun curriculum dialed. I may have found a large space though so I’m working on that currently! Most folks I’ve talked to are more interested in machine sewing. It’s IMPERITIVE to me that I put a class together that is completely free. So it might take some time to get together but it’s super important to me so it will happen.

If you are looking for some amazing handmade undies to make you look oh so damn hot, hit up AE for some Wildfire Undies. To all you bag makers out there, I heard AE is looking to get into bikepacking and loves to do trades…